It's the final day of creations in our Parts Festival today and we hope you've been inspired by the incredible LEGO® models and techniques our global team of fan builders have come up with. (If you're looking for a building challenge yourself, check out our latest competition, Recycle my Bicycle!) To round things off, Duncan Lindbo creates a cool ship.


With Ma.Ktober approaching, I decided to get in on the action with this build for the parts fest. So, here’s the Schwebeadler, a two-person hovercraft used primarily for scouting and light anti-infantry duties.

Just what is Ma.ktober? It’s another entry in the list of recurring month-long themed building events, much like SHIPtember (build a SHIP) and Novvember (build a Vic Viper). “Ma.Ktober” is derived from “Maschinen Krieger”, frequently abbreviated “Ma.K”. The world of Maschinen Krieger is the brainchild of Japanese artist/modeler Kow Yokoyama, and depicts a dirty, dusty, war-torn future with all sorts of bizarre power armors, hover tanks, and flying machines. His designs continue to draw a small but loyal following with their mix of gritty mechanical elements and organic curves, an aesthetic that could be described as “World War II, but in a post-post-post apocalyptic future”, or “dieselpunk”. Obviously, I’m a fan. 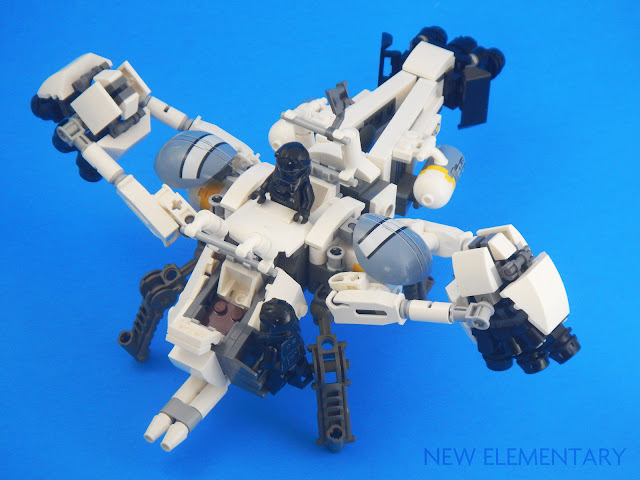 In this build, I used a bunch of the parts from the parts festival (see if you can spot them all!):

Using the Nexo arms as roll bars was the starting point for this build. They’re fairly straightforward, just a couple of 4L bars and some Technic connectors. Of course, this means the pilots are totally exposed, hence their need for life support gear. 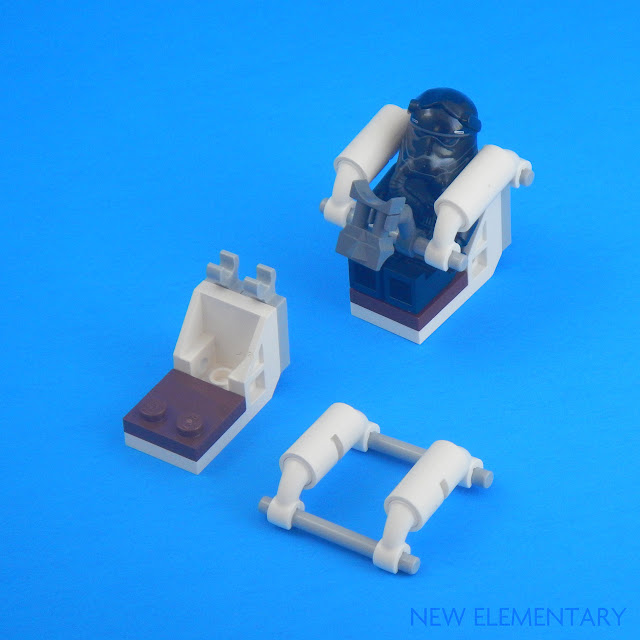 The more interesting assembly featuring them are the engines mounted on the tail. 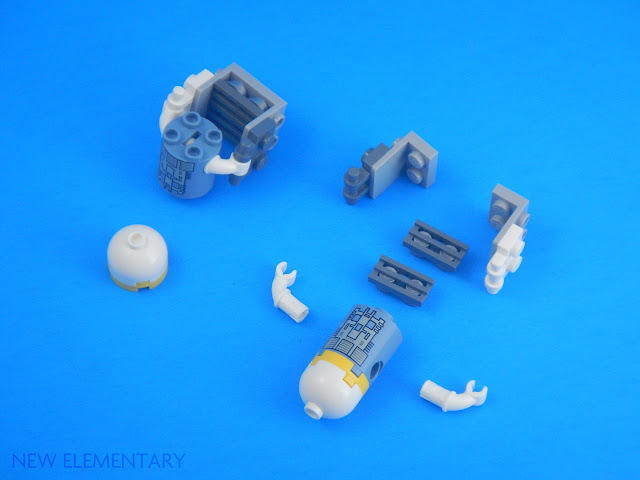 The SNOT geometry in these works out perfectly to allow the engines to pivot in and out while still being a completely legal build. 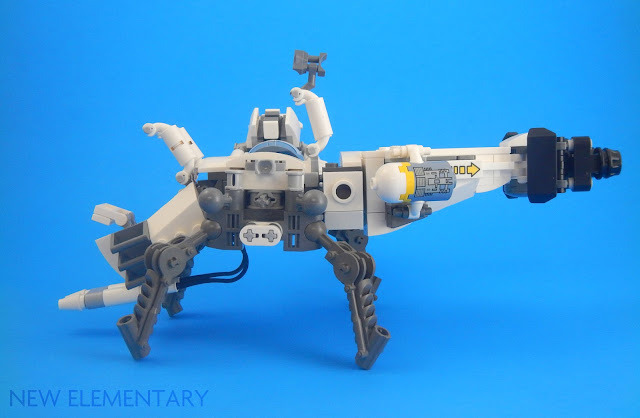 In my writeup for the TRT13 dropship, I mentioned that the intended use of the stud shooter involves inserting a Technic axle with a stop to actually fire the studs. Here, I used 4l axles with stops, but I locked them in place with some Technic bits. And like on the TRT13, I tucked a few tiles into the shooters to suggest mechanical details. 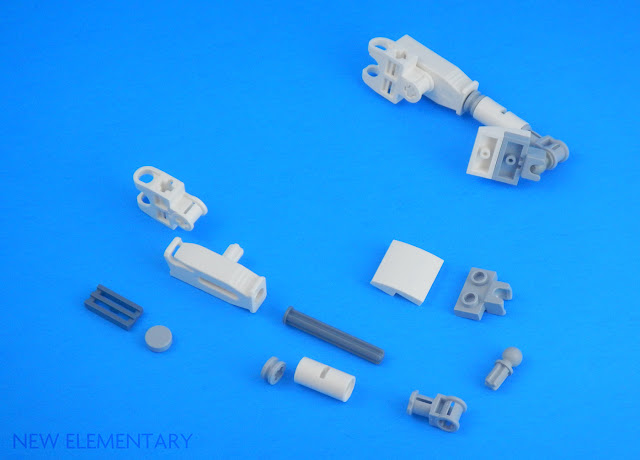 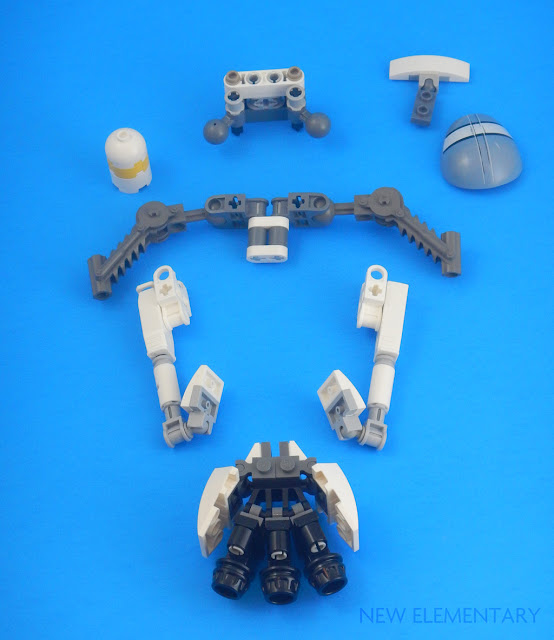 The inside of the stud shooter is slightly less than half a stud thick, so there’s some annoying rattle in the wing tip thrusters unless you’re careful to really get the washer tight against the back of the stud shooter (and even then, it’s probably going to creep back in after posing the wings). The backstory practically writes itself here. 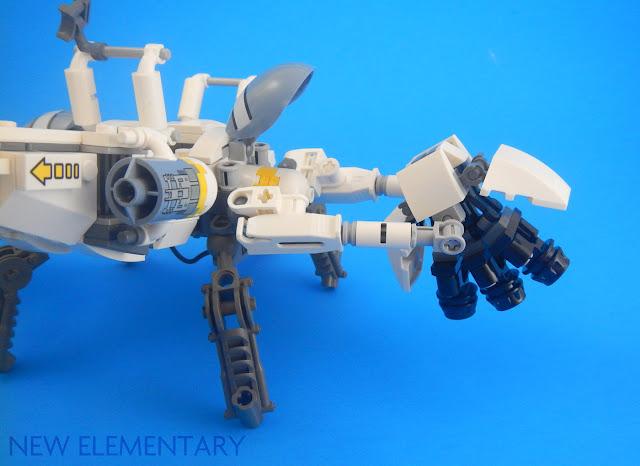 I immediately thought of using the pneumatic 'nozzles' as thrusters when I saw them, but that felt like such an obvious usage that I forced myself to try to use them for something else first (as various greebles on my space colony) before going thruster-crazy. 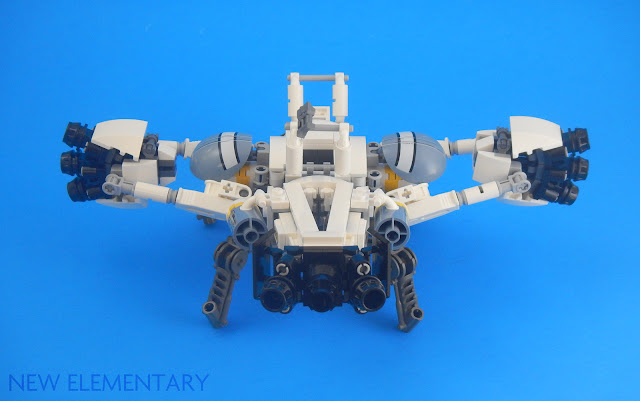 I knew from the start I wanted them to be articulated in some way. There was quite a bit of 'feature creep', as we say in software development, from the initial prototype to the final version. 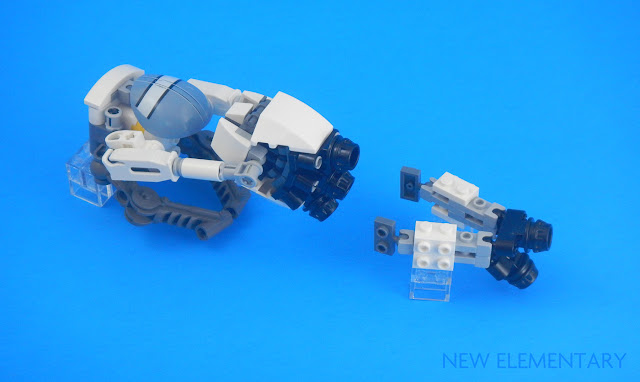 The arrangement of all the thrusters and flaps in the final version reminded me of outstretched feathers on a bird in flight, which, in conjunction with this being a Ma.K-inspired build, lead me to christen this MOC the “Schwebeadler”, which roughly translates as 'hover eagle'. 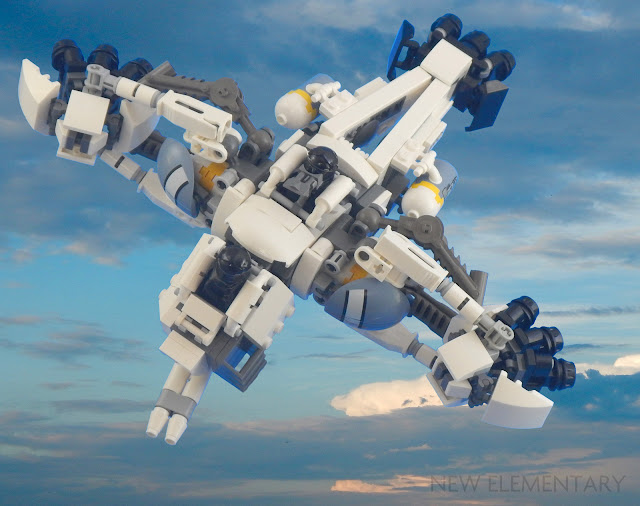 READ MORE: Inthert also used the pneumatic connectors as ship thrusters, but the ship could hardly be more different

Products mentioned in this post were kindly supplied by the LEGO Group. All content represents the opinions of New Elementary authors and not the LEGO Group. All text and images are © New Elementary unless otherwise attributed.
Posted by: Admin Posted on 9/21/2019 02:28:00 pm
Email ThisBlogThis!Share to TwitterShare to FacebookShare to Pinterest
Labels: Parts Festivals, Space, Technique