Our Parts Festival has almost ended but those of you with a good memory may recall there is an element that hasn't yet been shown in any of the LEGO® creations yet; Reinhardt's pauldron. We didn't have lots of this element and a couple of unfortunate complications meant that in the end, only one builder was able to use them. That builder is Inthert, and we're excited to present his ideas to you today!


As an AFOL who almost exclusively builds spaceships (more specifically, grey spaceships) there was one part amongst the selection I received that I took particular interest in: Design Element 5x5x3 in Medium Stone Grey/ Light Bluish Gray (6254171|49523). 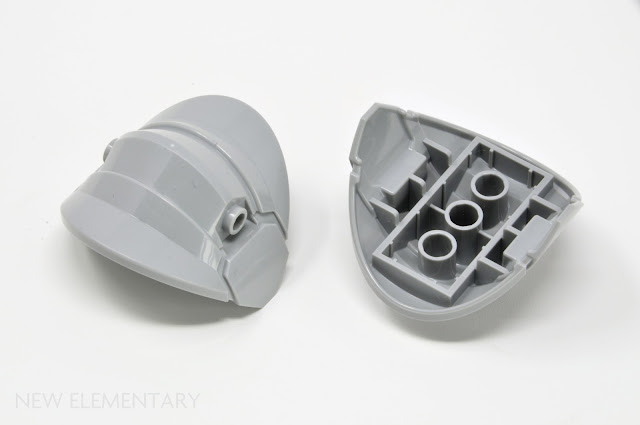 I recall seeing images of the first wave of Overwatch sets and disregarding this element as yet another style of Constraction figure clip-on armour plate. I was delighted to find out it actually has anti-studs (plus two exposed hollow studs) and so can be connected very easily with any number of System parts.


READ MORE: Overwatch designer Woon Tze explains the development of this element in our exclusive interview
Having realised it would be far more versatile than I first thought, I tried to think what the shape itself reminded me of.  It was only when I popped an eye on one of the hollow studs that I realised it sort of resembles the head and torso of an Aqua-droid from the Star Wars Clone Wars TV series. I ran with that aesthetic and ended up using two other parts I was sent. Firstly, four small cone elements (Mini Hat, No. 46 – 6254404|33492) to form the lower arms and legs. And secondly, a single Ninjago turntable (2X2X1, W/ Function – 6252373|40145) as the robot’s spindly abdomen. I also found a good use for some of the Brickheadz rounded glasses (6208550 | 35365) that I’ve had lying around for a while. 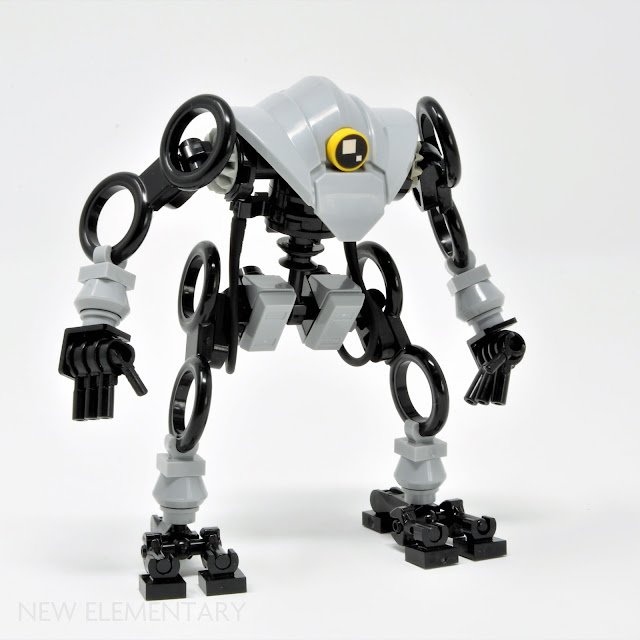 Now if you think the same way I do, you’re thinking this guy looks lonely right? Enter: ‘B-A-Bee Bot’! 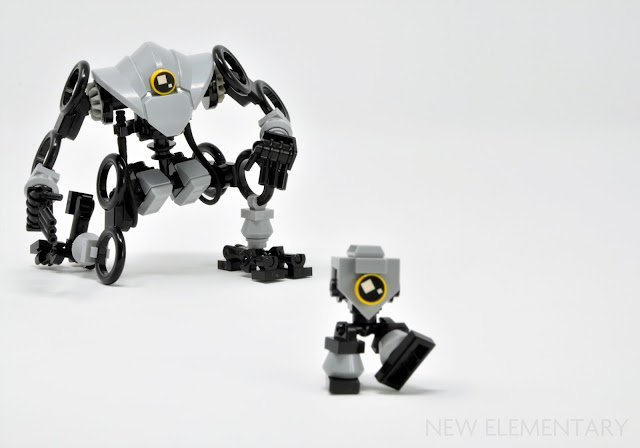 I’m of the opinion there are too many robots bent on world domination out there so I chose to give this ‘D-A-Dee Bot’ something else to live for. Also, do I really need an excuse to build an adorable robot infant!? This little fella uses the same small cone elements for his legs (6254404|33492) - just like his proud dad! 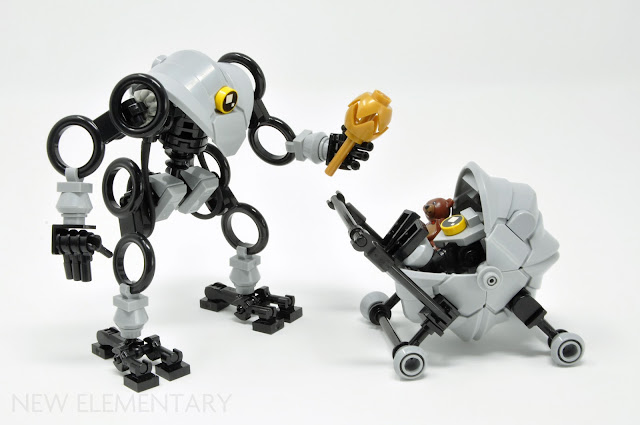 And those tiny robot legs are bound to get tired at some point so a fancy perambulator was an absolutely essential build too. It uses three of the armour shells for its main body along with four small cones for the wheels. And lastly, no one wants a bored B-A-Bee Bot so D-A-Dee Bot has got himself an eye-catching rattle made from two intermeshed crown pieces (Crown, No. 1 – 6257048 | 39262) and a 4L bar.

Sticking with the same Constraction-that’s-not-a-Constraction armour element, I made this dinky cargo carrier using two of them back to back (or should that be shoulder to shoulder?) to form the main body and cockpit. 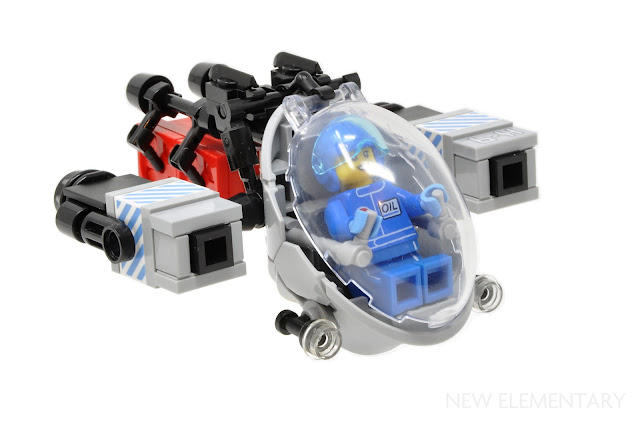 The bubble canopy element (87752) fits pretty nicely into the resulting cavity and really dictated the compact design this model would ultimately have. 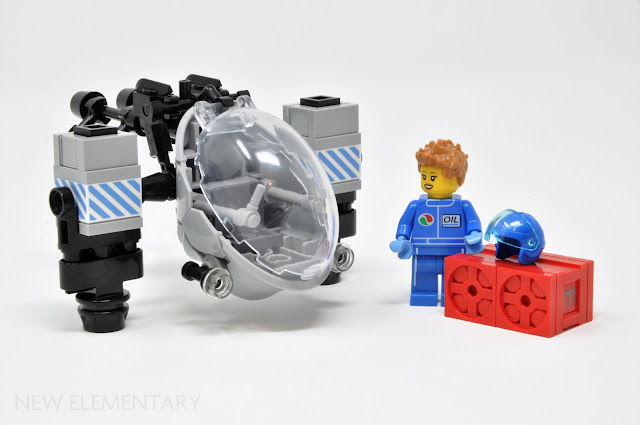 I imagine dozens of these buzzing around a spaceport, loading and unloading all manner of freight from larger ships. 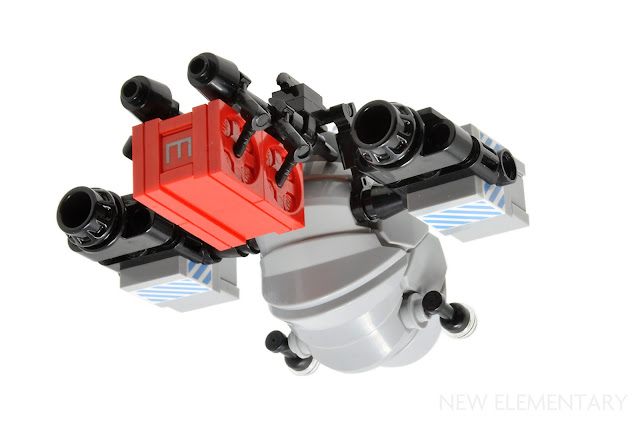 A look at the underside gives a better view of the armour plates but also shows off the inclusion another part I was sent. So far, it’s only available in Black and is seen used as part of a pneumatics system in the City set 60216 Downtown Fire Brigade. While it's officially called a Pneumatic connecting piece No.1 (41817 | 6249327), in my eyes it is without question and exclusively an engine thruster! Aside from the irregularly sized conical protrusion and the pneumatic hose nozzle, the part has two useful connection points in the form of regular Technic pinholes. Since a Technic toggle joint (48496) has two pins spaced the same distance apart, I figured the two Technic elements would snap together nicely to form the basis of some variable directional engines for the little craft.

But for such an interesting new piece, one ship just wasn’t enough! 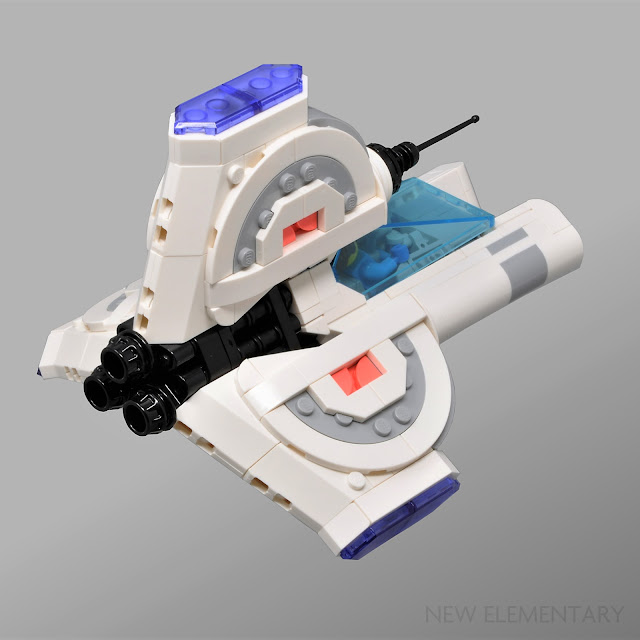 The core of this design came from connecting three of the pneumatic elements in a triangle to create a compact little engine block. Not wanting to have another super-small build, I decided to bulk it up a bit using six each of the new White wedge slopes (Left Roof Tile 3X3 Deg. 45/18/45 – 6254601|42862 and Right Roof Tile 3X3 Deg. 45/18/45 – 6254602|48165). They formed the basis of these bulbous protrusions which led to build taking on the classic Vic Viper profile.
Once again, I used the Ninjago turntable element (6252373|40145), only this time a little more prominently, to get some nice texture for the base of the front antenna spire. 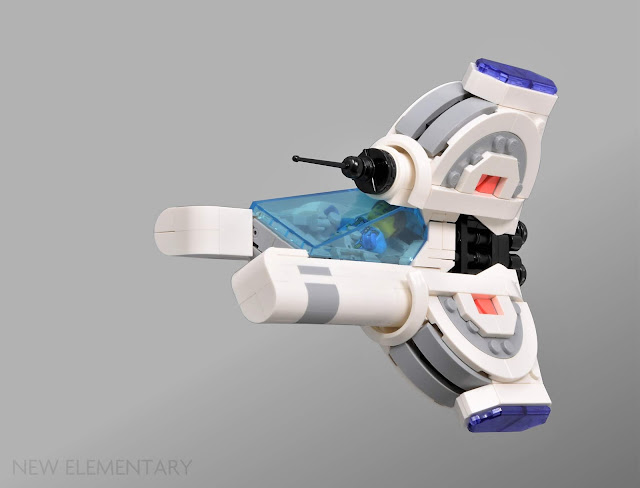 While I neglected to mention it before, the underside of the turntable element does accommodate parts with a 3.18mm bar but the resulting connection feels tighter than it should, leading me to believe that we won’t be seeing the it used in an official set anytime soon!

Products mentioned in this post were kindly supplied by the LEGO Group. All content represents the opinions of New Elementary authors and not the LEGO Group. All text and images are © New Elementary unless otherwise attributed.
Posted by: Admin Posted on 9/20/2019 03:30:00 am
Email ThisBlogThis!Share to TwitterShare to FacebookShare to Pinterest
Labels: Parts Festivals, Space, Technique