Hidden Side is a new LEGO® theme for 2019 featuring brick-built sets that combine with augmented reality (AR) to give a physical and digital aspect to each set. The Hidden Side range features eight building sets and interaction is via a smartphone app which reveals a hidden world of interactive mysteries and challenges to solve, using AR. 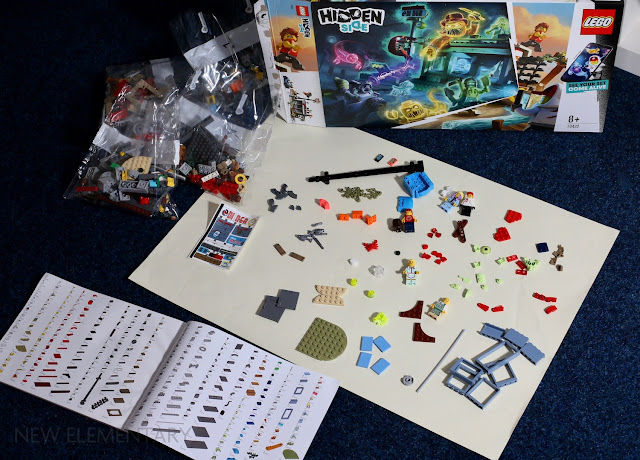 The new moulds in this set all belong to minifigures. Mini Wig, No. 270 is dual-moulded in Spring Yellowish Green/ Yellowish Green with Transparent Fluorescent Green/ Trans-Neon Green (6275120|53801). It's an eerie hairpiece used to create the ghostly alter-ego of Sally the server in this set. 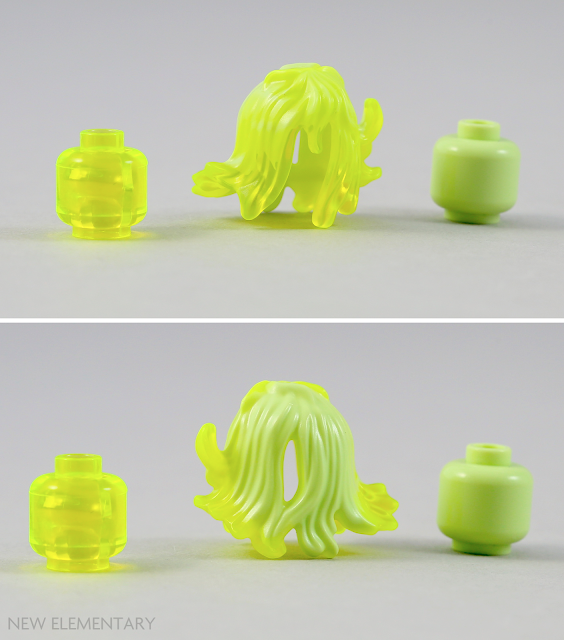 It also appeared in 70425 Newbury High School, as Jonas mentioned in his review. I love the 'bad hair day' look so I hope it also comes in a normal hair colour for wider use. 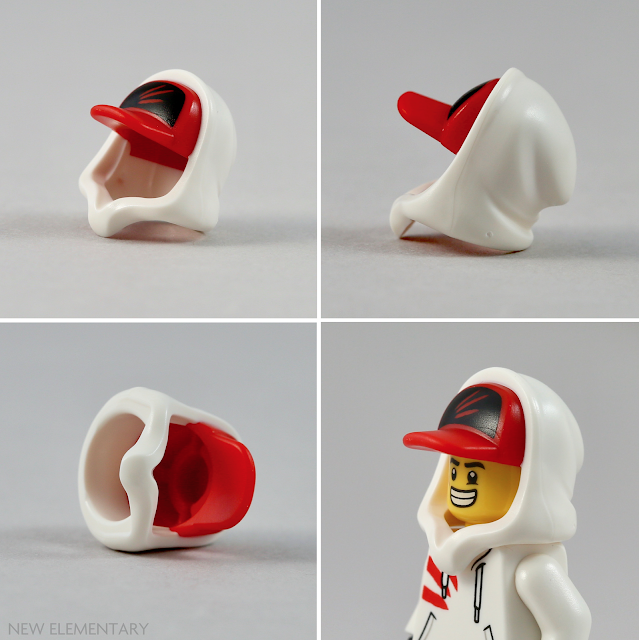 The White hoodie over Bright Red Baseball Cap with Black printing (Mini Hat, No. 108 –
6271131|56053) is also a new mould for this theme. It is worn by one of the two ghost-hunting players in the app and sets, namely Jack Davis. 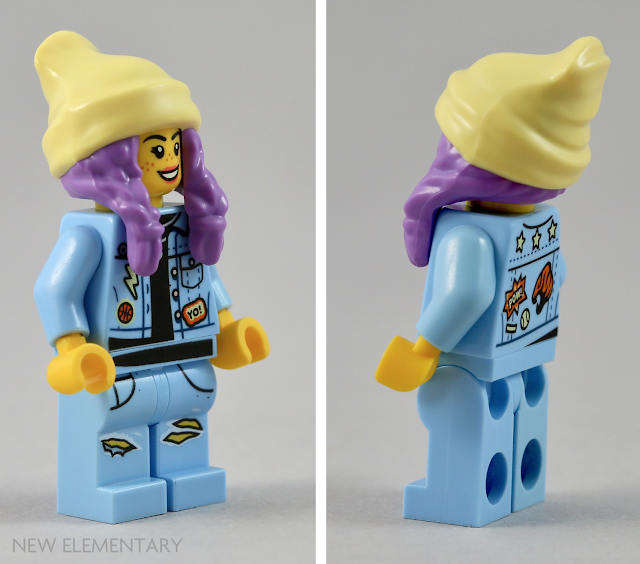 Spencer the Ghost Dog is a new dual-moulded animal in White with Transparent Clear (Dog, No. 17 - 61271329|56202) who has a ghostly 'dissolving' appearance. Spencer belongs to one of the ghost sleuths who are integral to the theme, so he comes in most Hidden Side sets. 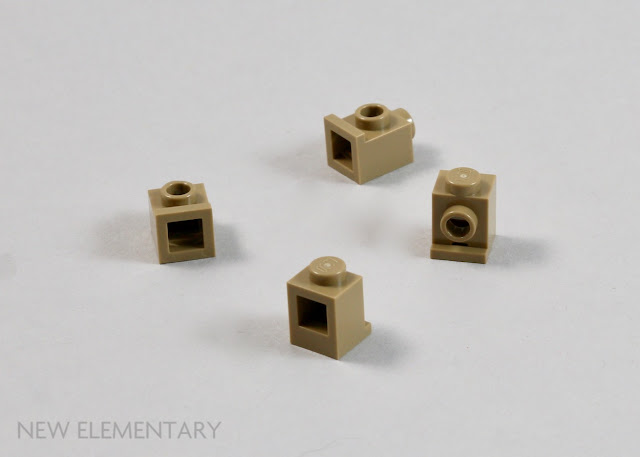 Believe it or not, this set marks the first time the headlight brick has appeared in a set in Sand Yellow/Dark Tan (6273590|4070). It is an iconic brick – the original SNOT brick – so all new colours are very welcome! There are four included in this set. 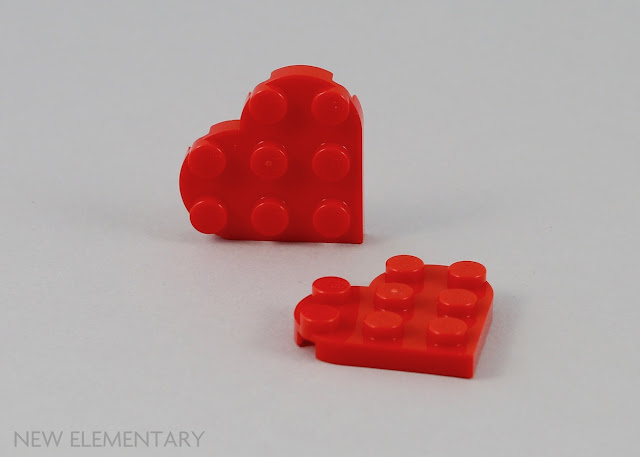 Heart Plate 3X3 in Bright Red (6276193|39613) is the first recolour of this since the original Bright Purple/Dark Pink version appeared in four LEGO Movie 2 sets earlier in the year. You'll find inventive uses for it in our current Parts Festival. 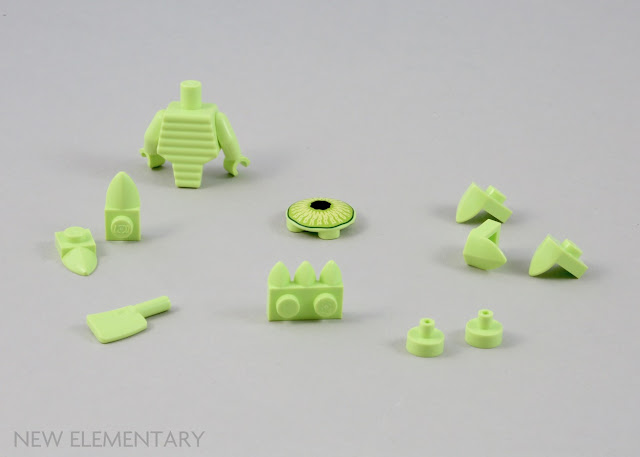 While not all the elements in the above image are new, I thought it would be nice to see all the Spring Yellowish Green elements together.  The ones that are appearing for the first time in this colour (although they are also in other Hidden Side sets) are: 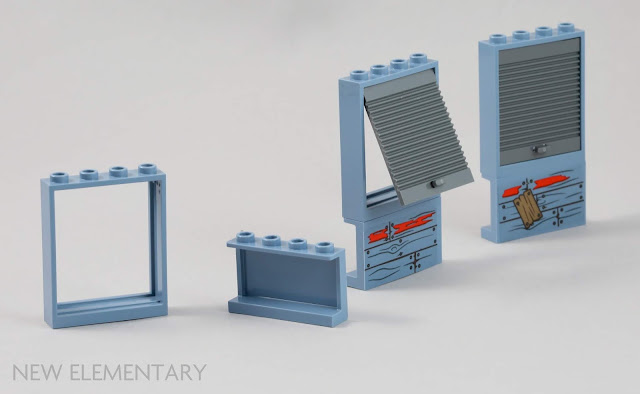 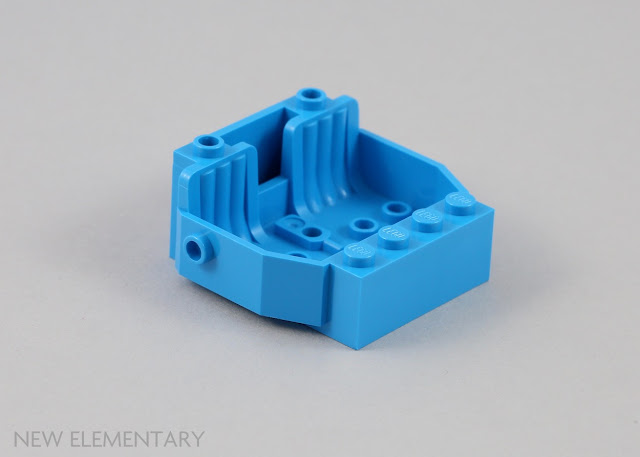 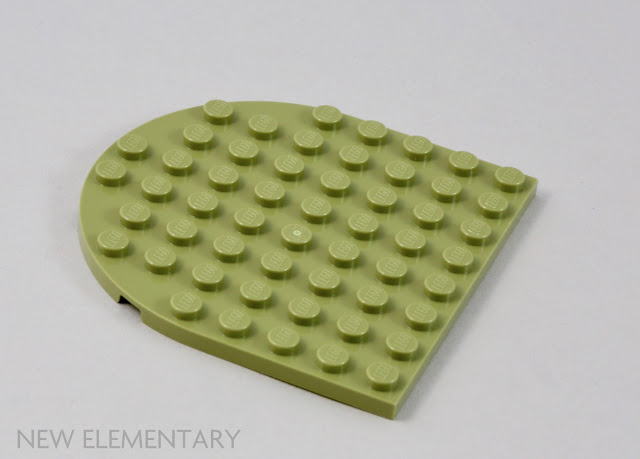 Plate 8X8, 1/2 Circle in Olive Green (6275667|41948) is the first appearance in this colour for this new part introduced in 2019. Other sets have included it in Bright Yellowish Green/Lime, Medium Lavender and Light Purple/Bright Pink. It was introduced for the Disney Princess sub-theme which nowadays has a "Build and Swap" modular concept where 8x8 sections can be changed around.

Last year's sets containing Build and Swap modules attached 4x8 plates to curved 4x8 plates to achieve the same shape, however it is clear that these two parts were difficult or restrictive for designers to secure together – and frustrating for kids when they played with the set and half the base got left behind! Hence this new, rather beautiful single element. 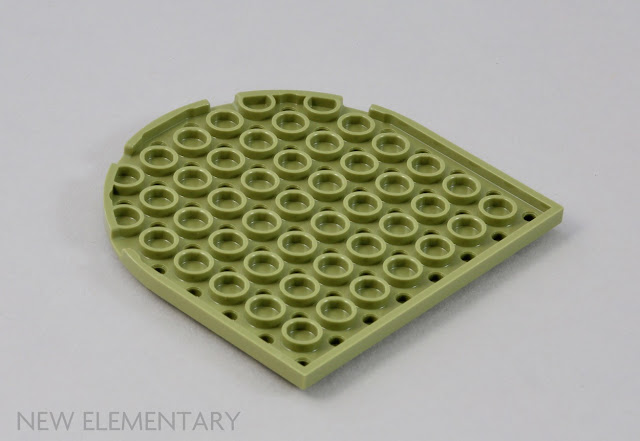 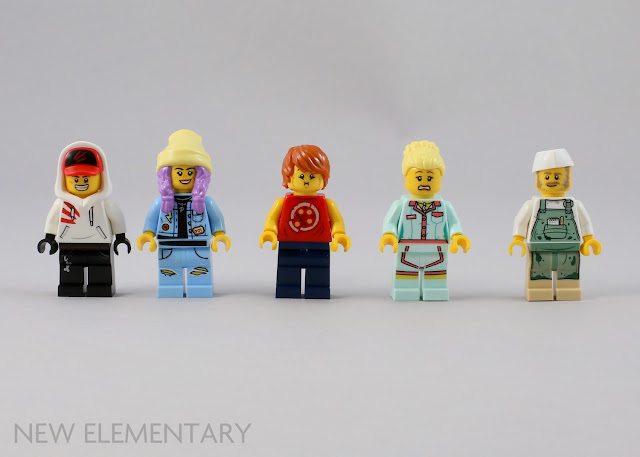 There are five minifigures in this set with two figures having an alternative 'ghostly' appearance. Jack Davids and Parker L. Jackson are the two potential ghost finders that you can also choose to be in the app. Ronny is the hotdog-eating, pizza-shirt wearing minifigure in the centre. Next we have your server for tonight called Sally and finally the head chef, Chef Enzo. 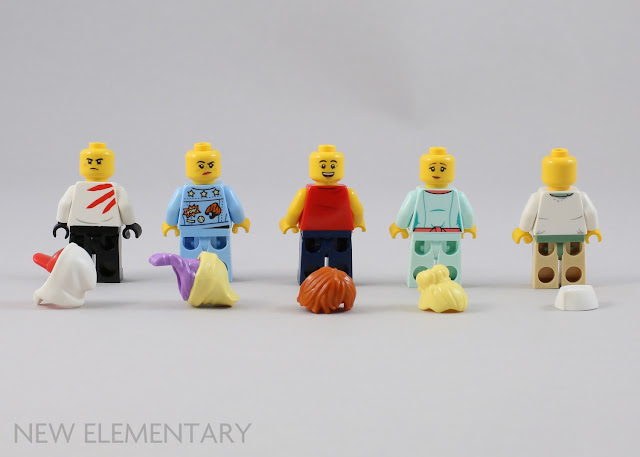 Jack, Parker, Ronny and Sally all have alternative facial expressions on the rear and all the minifigures have nicely detailed front and rear torsos. All apart from Ronny have printed details on their legs.

The two ghostly alternatives are Sally the server and Chef Enzo. 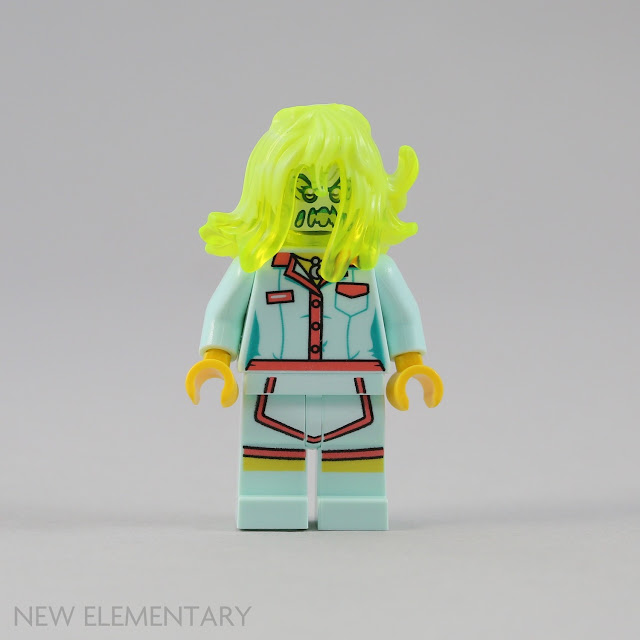 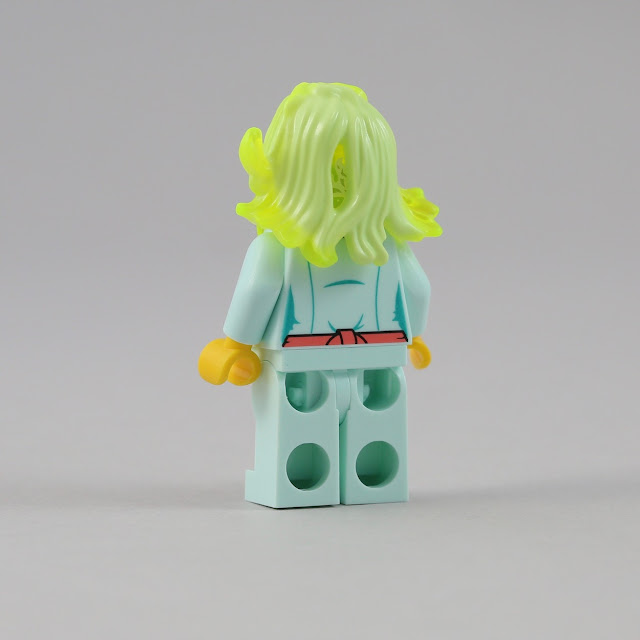 Sally's apron is tied in a bow at the back but the printing ends rather suddenly making it look as though someone has forgotten her back printing at the hips to complete the bow. 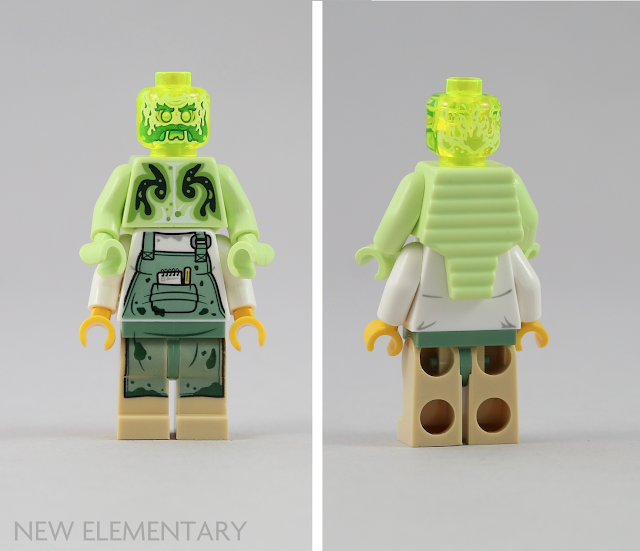 My Chef Enzo has a slight printing error on the legs, you can see there is an unprinted area on his right leg at the hip curve where his Earth Green and Sand Green apron lies. The Mini Paper Hat in White (6063702|98381) adorns his head but I left his head uncovered to show the print details. 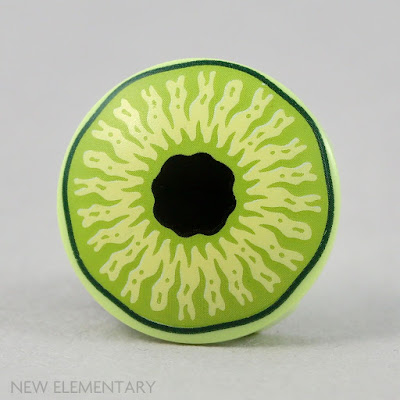 Boat Stud 2X2 in Spring Yellowish Green is a new colour for this element but this one is adorned with a spooky eye (Slide Shoe Round 2X2, No. 14 – 6276231) and is exclusive to this set. 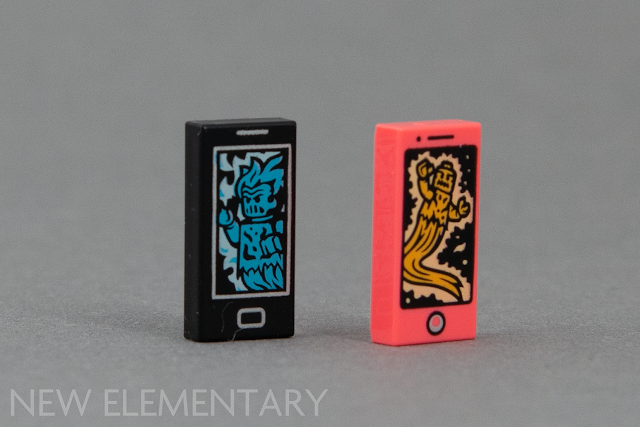 As Jonas mentioned in his review, Jack and Parker both have smartphones that display LEGO-fied version of the ghosts from Hidden Side printed onto 1x2 tiles to appear like the app action. This set has the same two tiles; the Black one (6271133) for Jack and a Vibrant Coral model (6275078) for the Parker.


Other Elements of Interest 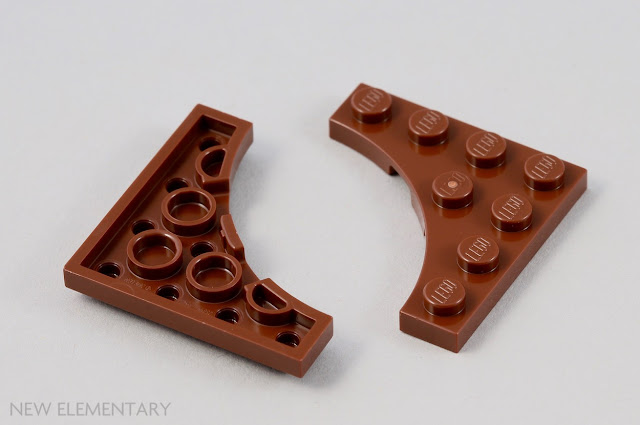 Plate 4X4, W/ Arch in Reddish Brown ( 6228841|35044) has previously appeared in two other expensive or hard-to-get sets; the LEGO House exclusive 40366 LEGO House Dinosaurs and the massive 70840 Welcome to Apocalypseburg! (EDIT - Thanks to all who commented. I was foiled by a changing Element ID - this element is also in 70834 MetalBeard's Heavy Metal Motor Trike!, 10261 Creator Expert Rollercoaster, 21313 Ideas Ship in a Bottle and the AFOL Designer set Wild West Saloon by our own Jonas Kramm. Turns out it's of interest only because I missed so many appearances!!) 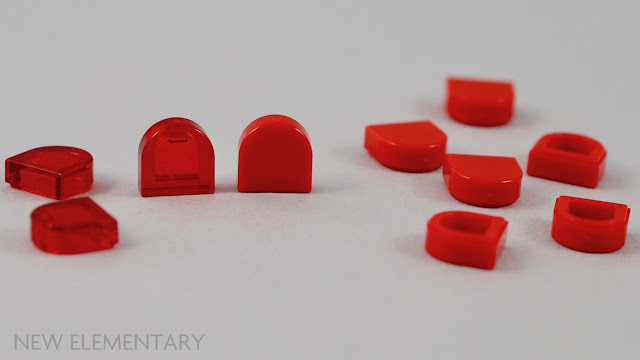 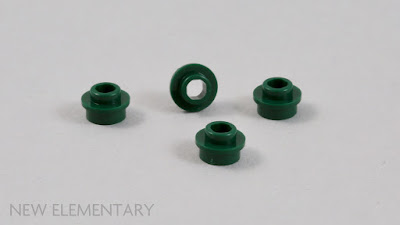 The apollo stud in Earth Green/Dark Green (Pl.Round 1X1 W. Throughg. Hole – 6230571|28626) previously appeared with one of the Unikitty Blind Bag series figures but Hidden Side will be its first time in proper sets. There are five included in Shrimp Shack attack and two in 70425 Newbury Haunted High School. 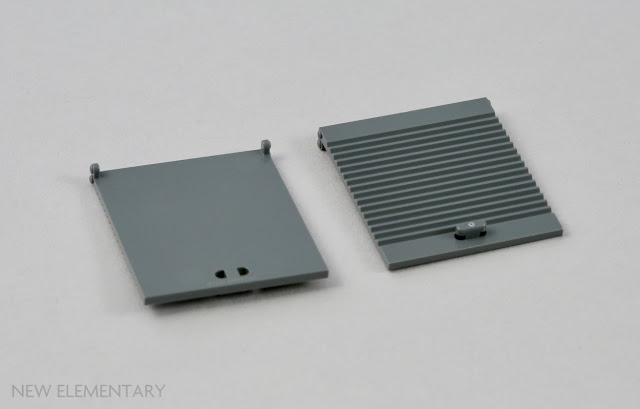 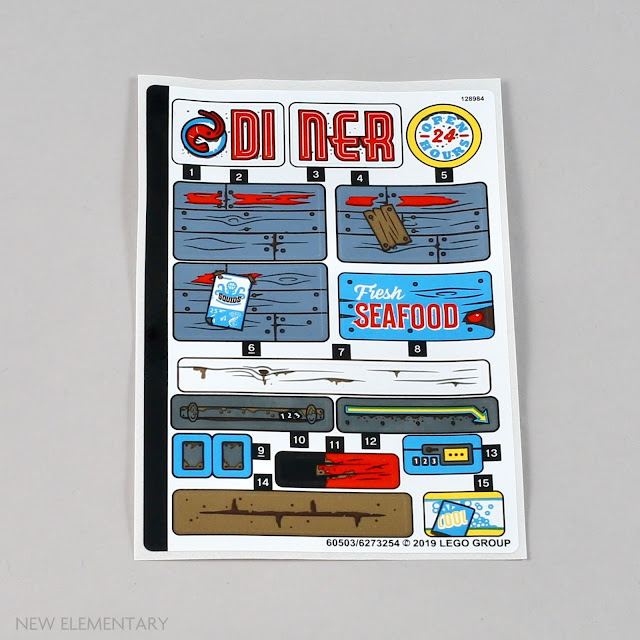 There's fairly sizeable sticker sheet in this set with 16 stickers.  These mainly bring the Shrimp Shack to life with signs like the DINER, Open 24 hours and some 'shackery' details. I know some of our readers love to see these applied so let's get sticking!

The finished build is a small shrimp shack with the impression of a little dock area at the front and a large diner sign with an oversized shrimp to advertise the business on the left. 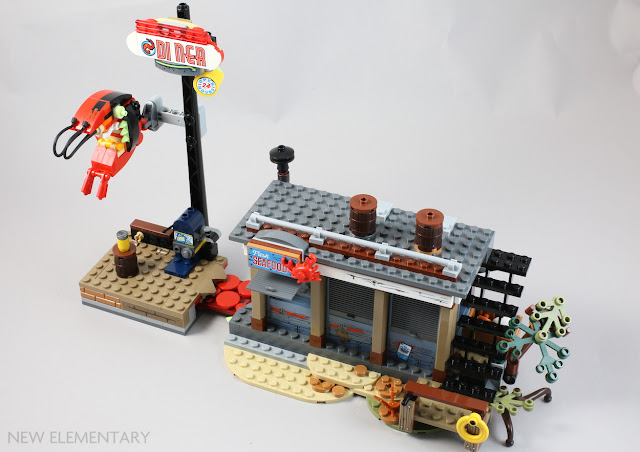 The oversized shrimp is able to rotate 90 degrees on the click hinge to show its evil hidden side. 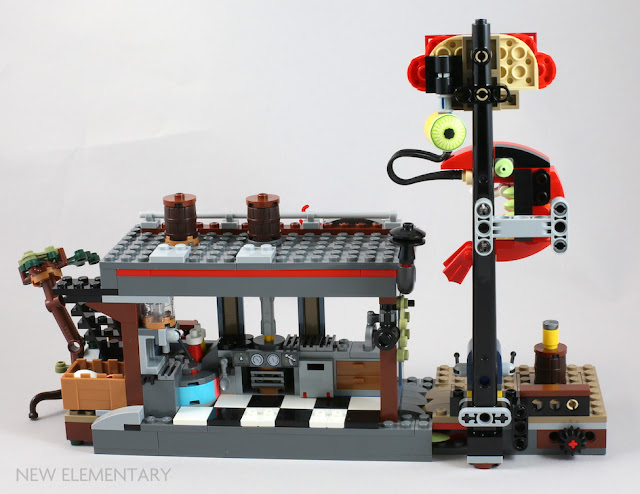 The rear of the shack allows access to the kitchen area with oven, hob, condiments and pots, etc. There is a revolving coloured macaroni brick under the condiments that presumably has a function in the app. The Technic gear on the far right and the central barrel at the top both perform play functions that I will describe separately. The oversized shrimp's evil side can be seen from the back and the use of the two Red Heart Plates 3x3 becomes clearer on the Diner sign at this angle. 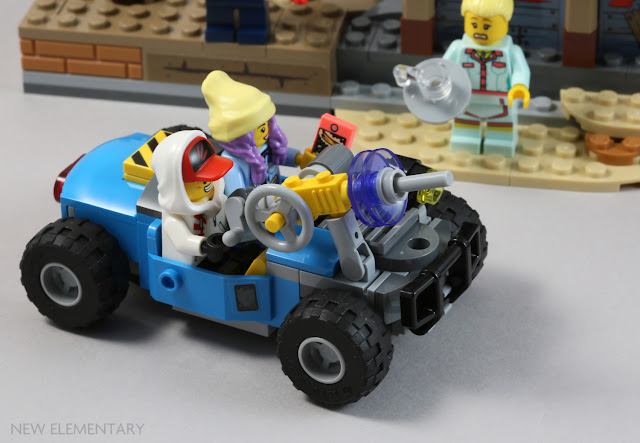 There is also a small all terrain buggy-like vehicle that is armed with some ghost-busting equipment and space for two thanks to that vehicle base in Dark Azure. 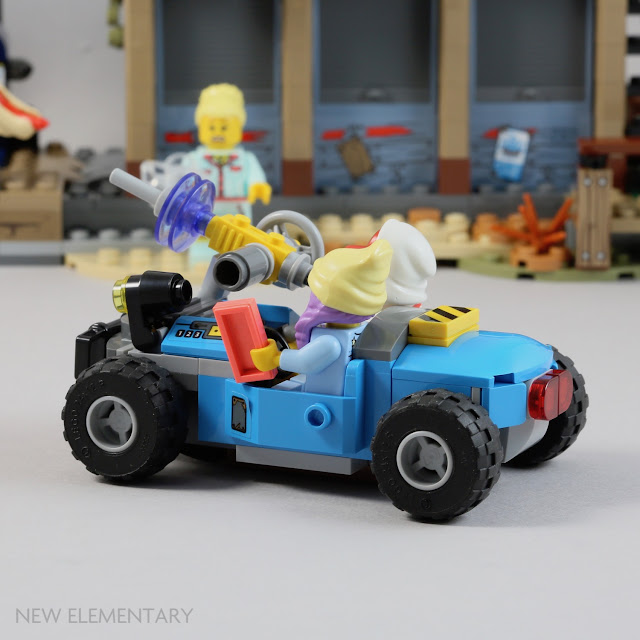 There are a couple of play functions that are operated by turning or pulling areas of the build that relate to the app and the 'one hand in the physical' aspect of the interaction.

I have an iPhone SE and, according to the compatibility list on the App Store, I should be able to download and play with the LEGO Hidden Side app. I haven't managed to download it despite making sure I have the latest iOS and sufficient memory for the app. 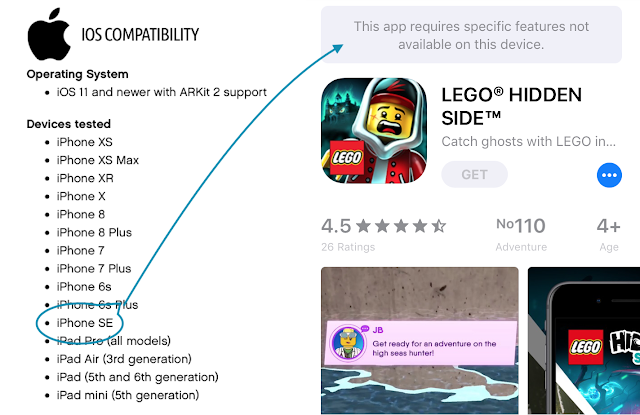 I'll still show you the play features that move of course but I need to find an 8 year old nearby who will no doubt have a more recent smartphone that is compatible!

The ground between the Diner sign and the shack can slide open to reveal some sharp teeth and what I imagine to be blood splatter... or dead shrimp?

The Technic gear at the rear of the Diner sign's platform can be turned to open up the ground and reveal another scary mouth and hiding space.

Turning one of the barrels on the roof makes the oven revolve to reveal a terrifying 1x2 brick in Bright Green - I guess this is one feature that is best experienced with the app! I might change the parts to a cooked and uncooked crab, as we saw in Ninjago City!

The whole concept of Hidden Side is that there is a physical build and an AR world revealed through the app.  I won't deny that I was disappointed my phone couldn't download the app despite being on the compatible list. I'll look into this further but it would have been nicer if was a simple case of check compatibility, yes it works and voilà - play the app. 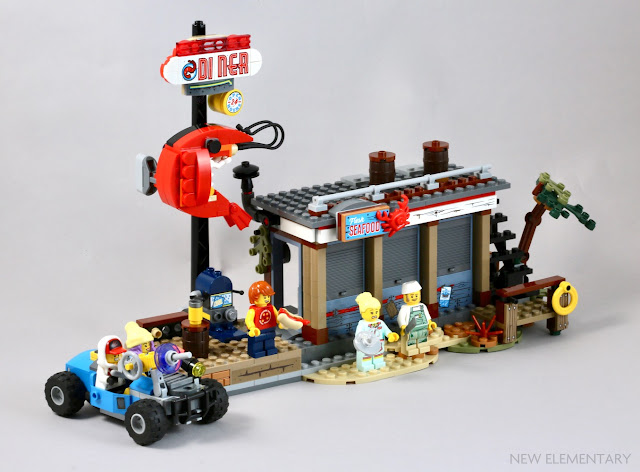 The build itself has some nice new elements although the actual shack is quite a simple build, this is an 8+ set. I did like the robust little vehicle that will withstand play and there are some cute play functions built in. The Diner sign really makes this set and its oversized shrimp was my favourite part of the build.

I know that play functions will be enjoyed by the age group this set is aimed at. My own children are too young to build such a set but after I showed them the completed set they happily opened the shack's hatches to serve some fish and turned the Technic gear to put the fish into the monster's mouth as "he was hungry". Play functions are something we perhaps under-appreciate as adults but children love anything with moving parts.

A final thought, a LEGO minifigure-scale shrimp would have been the icing on the cake of this  Shrimp Shack. With only fish, an ostrich egg, a hotdog and condiments available, this Shrimp Shack employs false advertising to entice those poor minifigure customers.

Products mentioned in this post were kindly supplied by the LEGO Group. All content represents the opinions of New Elementary authors and not the LEGO Group. All text and images are © New Elementary unless otherwise attributed.
Posted by: Elspeth De Montes Posted on 9/02/2019 03:30:00 am
Email ThisBlogThis!Share to TwitterShare to FacebookShare to Pinterest
Labels: Hidden Side, Set review, Technique