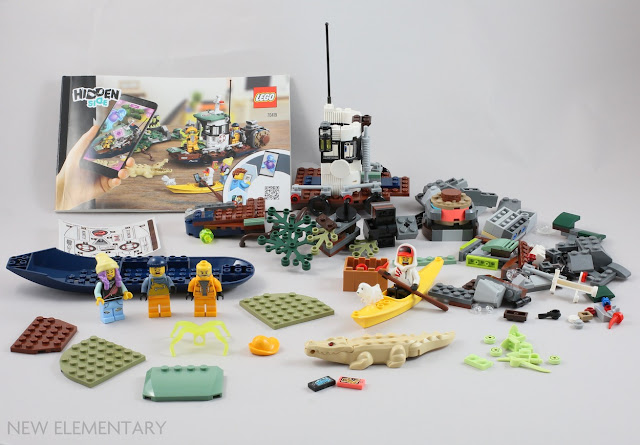 Let's take a look and see if this set has any interesting new elements to float the boat of New Elementary readers. 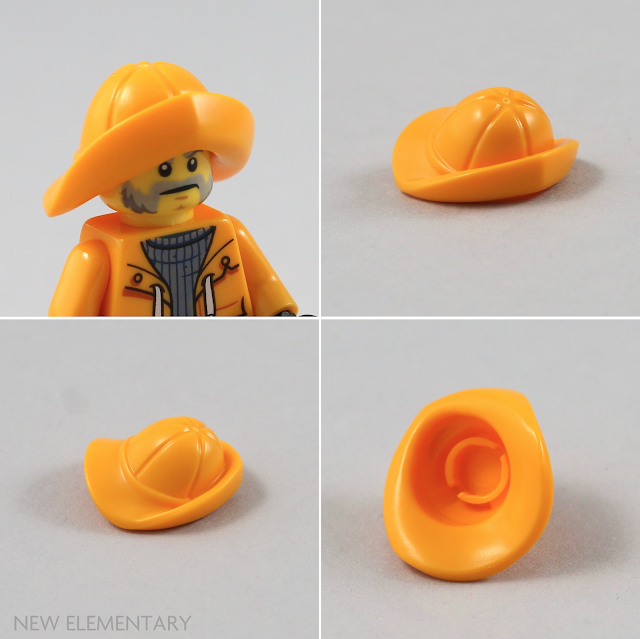 A Sou'wester (Mini Hat, No. 104 in Flame Yellowish Orange/Bright Light Orange - 6271841|57881) is a great addition to minifigures' headwear options. Up until this point LEGO mini-fishermen have been wearing little knitted hats to keep their heads warm but everyone knows that the real professionals wear a Sou'wester in the bad weather. 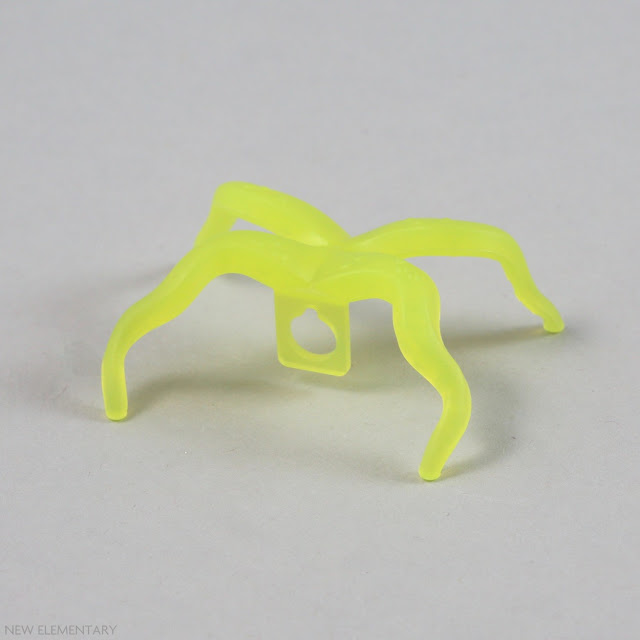 There are some new octopus tentacles that attach to minifigures via a neck ring. Tentacles with Suction Cups and Neck Ring (Mini Armour, No. 19 in Transparent Fluorescent Green/ Trans. Neon Green - 6271843|53800) is a new mould that will delight Lovecraftian horror fans. 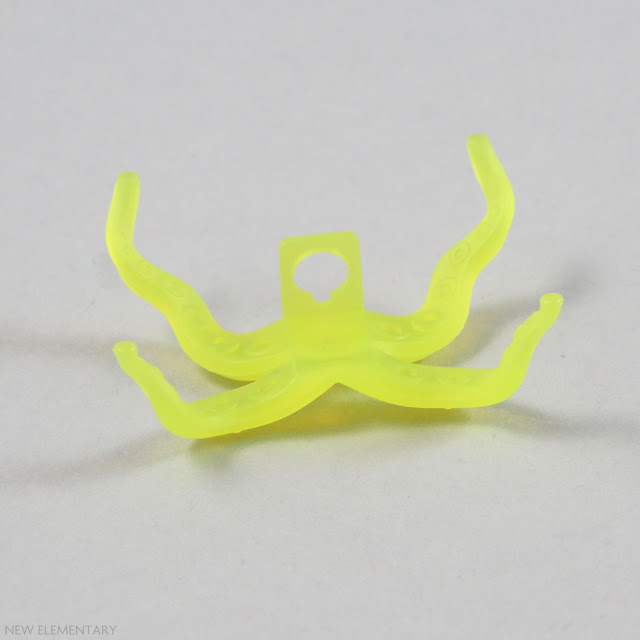 The underside has raised suction cups on the tentacles, a very nice detail.  This element has an interesting texture almost like a 3D printed object. It is firm but malleable with a matt, slightly rough finish. This is something that is difficult to show on a photograph of course. 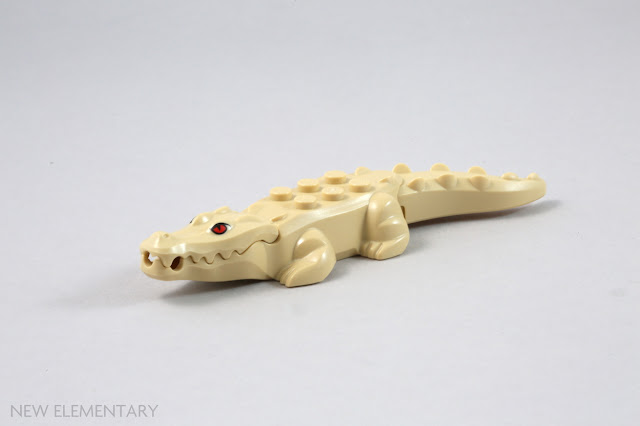 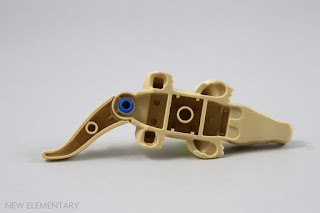 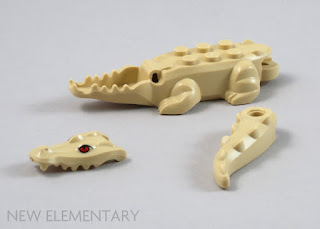 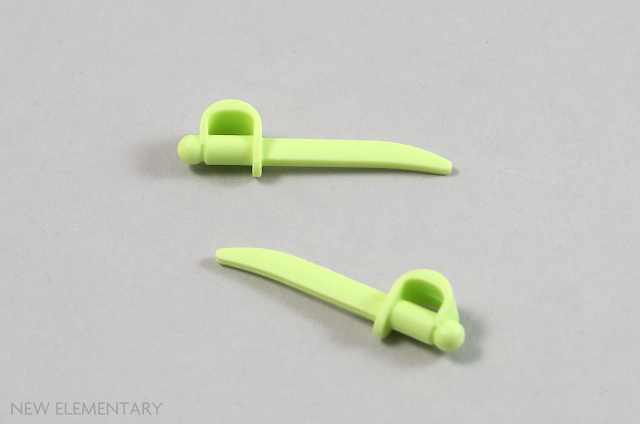 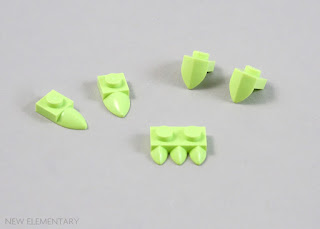 All of the others have been mentioned in our previous Hidden Side reviews but are new to this theme.

There are three other Spring Yellowish Green elements in this set: 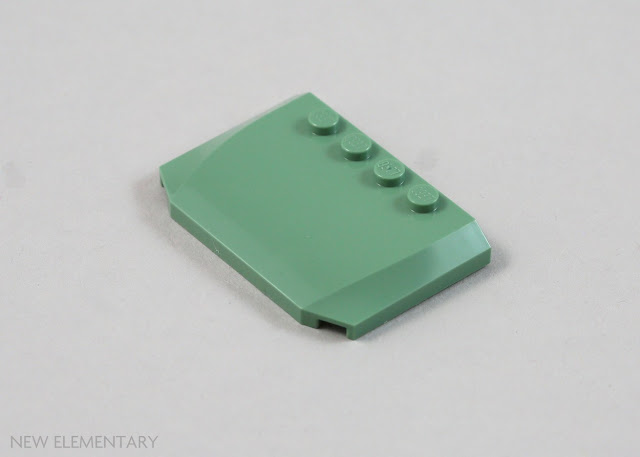 Triple Curved Wedge 4 x 6 x 2/3 in Sand Green (Plate 4X6X2/3 - 6274974|52031) is a new colour for this element. This element actually comes in 24 different colours and is most commonly used as a roof or bonnet for vehicles. Interestingly 11 colours only appear in two sets or fewer so it seems that while a new colour can pop up reasonably often, it might only appear in a very limited number of sets.

There are four minifigures in this set. 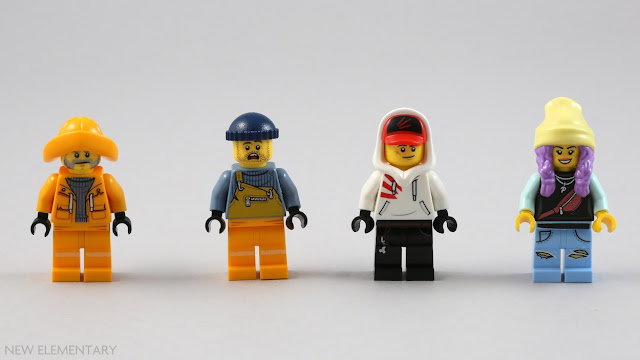 From left to right we have the two shrimp fishermen, Captain Jonas and Jonas Jr. We already know the ghost hunters Jack Davids and Parker L. Jackson from previous reviews. 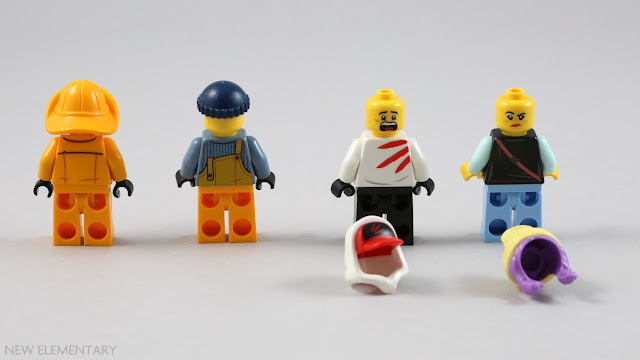 Neither fisherman has a reversible head so poor Jonas Jr has a permanent "eh what?" look on his face. Jack has a scared, yelling face and Parker looks to be thinking about her options. 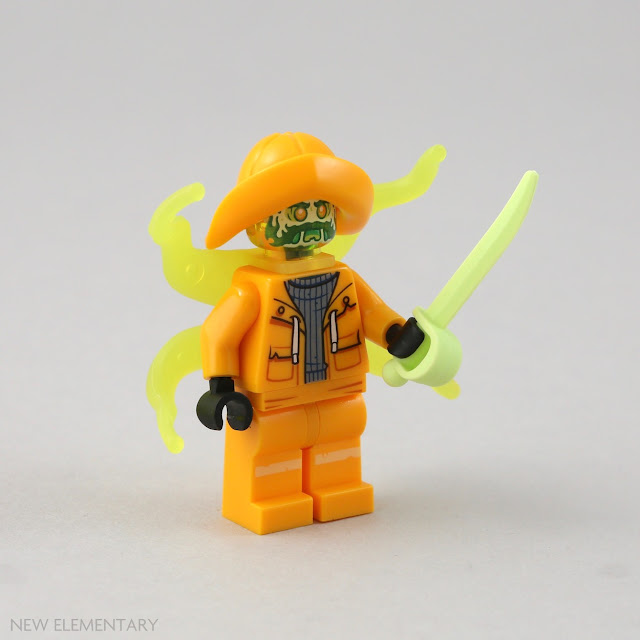 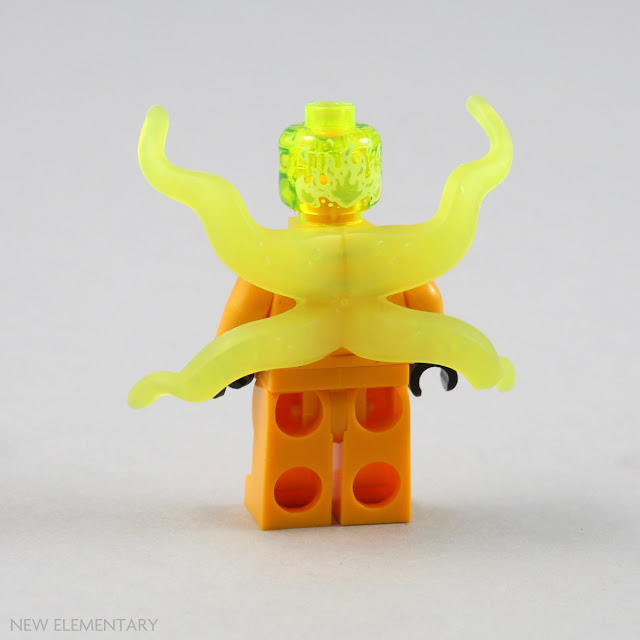 Captain Jonas is the unfortunate individual who has a hidden side and turns into an octopean-armed ghost with those new tentacles plus a new Ghost Head with Sideburns and Slime in Trans. Fluorescent Green (6279128). 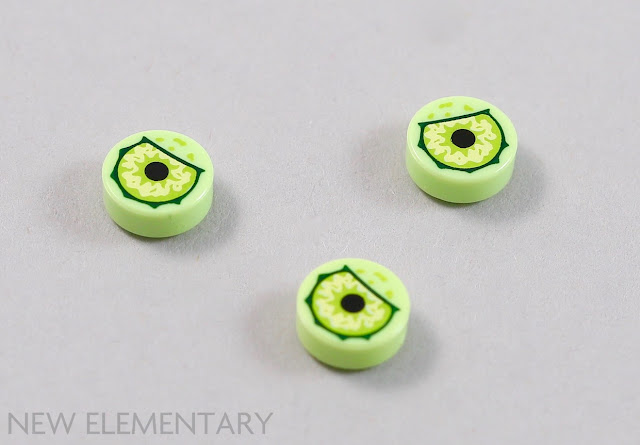 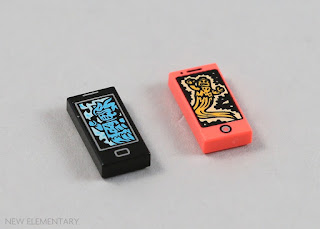 Jack and Parker both have smartphones that display ghosts from Hidden Side printed onto 1x2 tiles to appear like the app.

There is one small sticker sheet with 15 stickers that are exclusively used to decorate the ship and give it a worn, wrecked appearance. 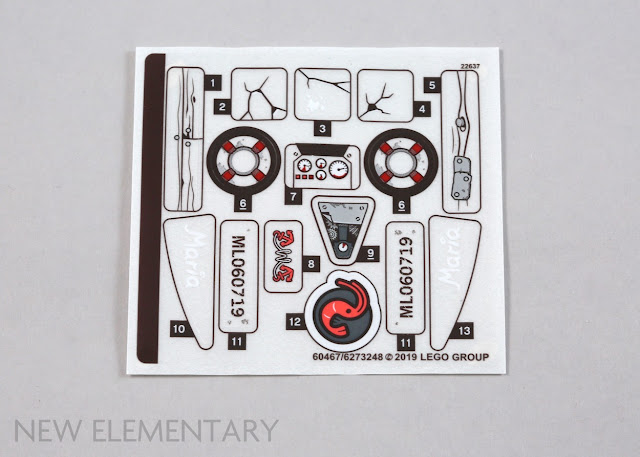 There are a handful of other elements that have only appeared in one or perhaps two other sets and are of interest.  This is a relatively low-cost set so it means that these elements can be purchased relatively affordably, if you want the set, or alternatively they are likely to be available more cheaply on the secondary market. 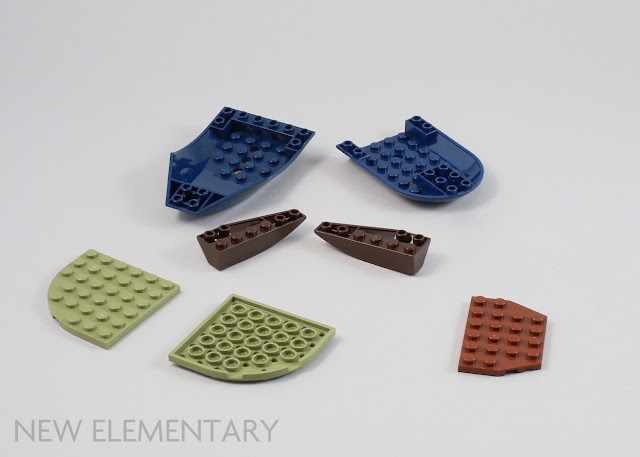 As this set is designed for ages 7+, it is a relatively simple and straightforward build.  There is a ship, a monstrous rocky outcrop on which to shipwreck the boat, a kayak with crocodile and the minifigures of course. The boat was my favourite part of the build. 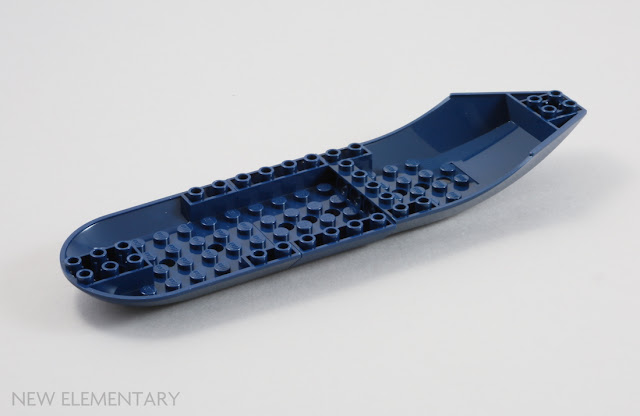 The aforementioned Earth Blue hull pieces are used along with Inverted Sloped Wedge 4X6 (6220699|60219) to create the base of the boat. 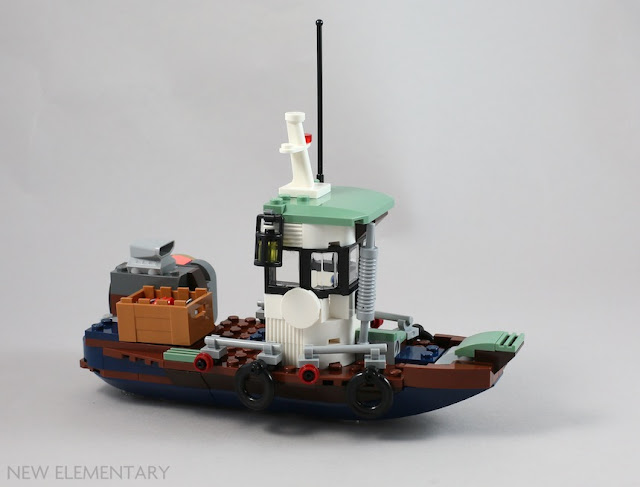 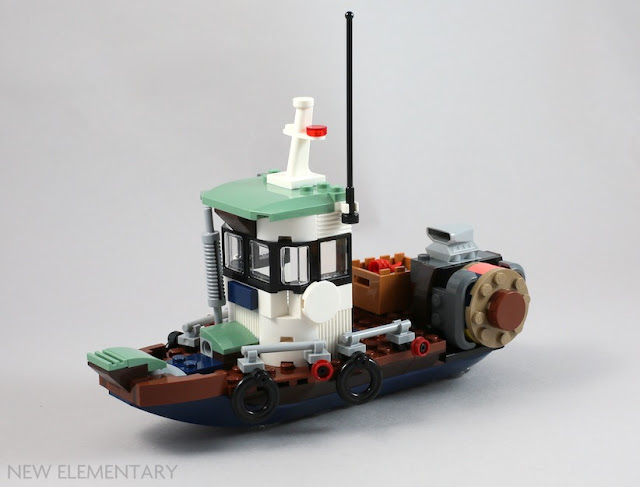 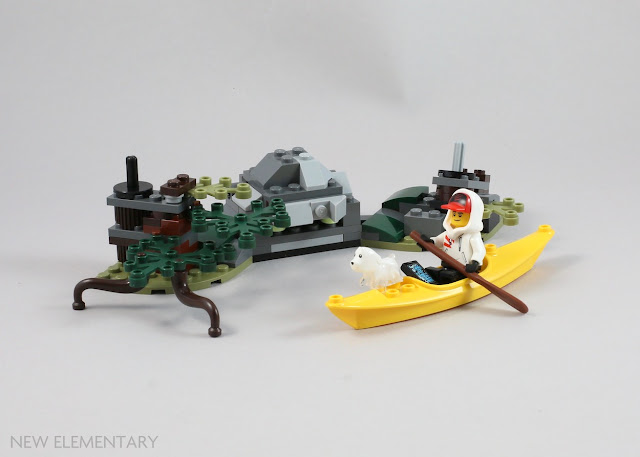 The rocky outcrop is another simple build but the play features focus on this area. I can imagine this outcrop being expanded by an enthusiastic child or adult with their own bricks to be turned into a bigger island. 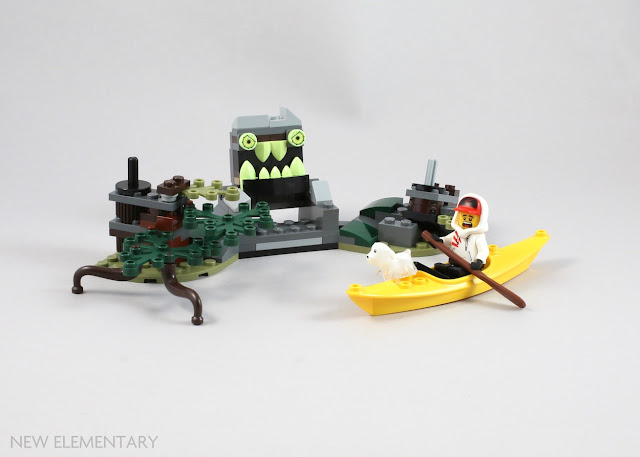 The monster is the hidden side of the central rock formation, presumably causing the ship to run aground. A simple but effective pop-up mechanism allows the monster face to appear. 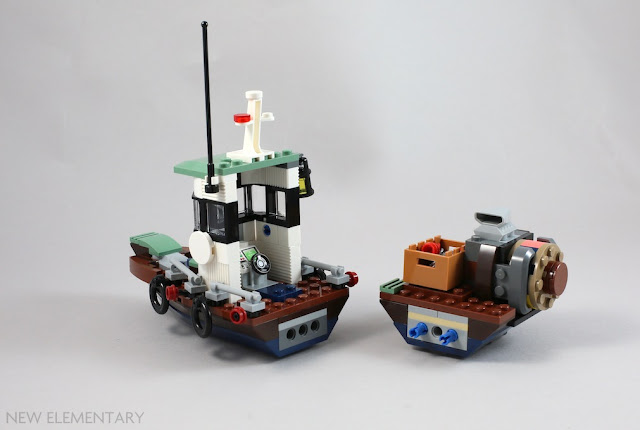 The other play feature is the ship of course as the hull can be separated easily to allow it to run aground onto the Technic axles on the rocky outcrop.

Finally, as correctly pointed out by one of our readers, the reason why the Shrimp Shack has no shrimp is because the Wrecked Shrimp Boat never ever makes it back to the shack with its catch of the day! I have already seen this set discounted to £20 in the UK (£5 saving in a nationwide supermarket) and it is a great little set especially if you get it for that price. The two fishermen and their ship will be attractive to youngsters and the added play features of a monster and the ability to shipwreck your ship provide extra fun for all.

There are not a huge amount of attractive elements for those looking purely for a parts pack but the new fishermen (especially that Sou' Wester) and the basic hull and cabin elements to MOC a ship are worth a look for this price.

Finally, before anyone points this out I have to explain the inconsistency between ship and boat in this review.  While LEGO have named the set Wrecked Shrimp Boat, I was once educated by a senior Naval Officer that ships float on the sea and boats go under the sea. Ever since, I have struggled to call any vessel on the surface a boat!


READ MORE:  Head to Hidden Side High... read our review of the new parts in 70425 Newbury Haunted High School

Posted by: Elspeth De Montes Posted on 9/16/2019 11:28:00 am
Email ThisBlogThis!Share to TwitterShare to FacebookShare to Pinterest
Labels: Hidden Side, Set review