How the LEGO® element team designed the new gear wheels

We’ve really enjoyed this latest Parts Festival, which now draws to a close, and we are so grateful to the talented artists who gave us their time and creative talents for everyone’s pleasure; in no particular order – Jessica Farrell, Inthert, Jaap Bijl, Duncan Lindbo, Samuel Pister, Sarah Beyer and Jaroslaw Walter.

To complete the festival we will take another look at what are arguably the most noticeable parts in the selection; the new gear wheel plates that we affectionately named ‘splat gears’. You may recall back in March, Elspeth wrote a fantastic post listing the different kinds of LEGO gears through history, including an examination of the new splat gear family. 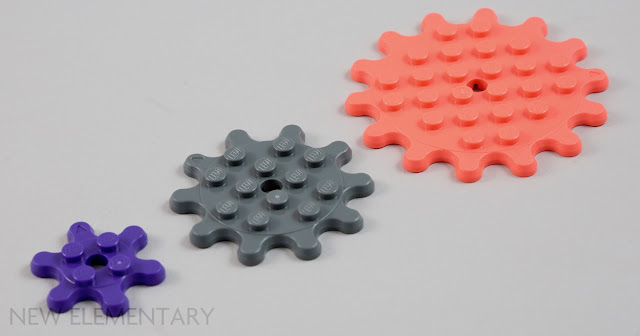 It seems LEGO enjoyed her post too! – we later received this fascinating email from Marinus Jasperse on behalf of the Element Design Platform Team at the LEGO Group about the development of the new gear family...

It is great to see, again, a thorough analysis by New Elementary, now on the new LEGO System plate gear wheels. And fun to see a similar search down memory lane as we did, comparing these gears with preceding versions.


At the start of the development we dug up some old boxes for inspiration and looked at set 802 from 1970 and set 003 Master Mechanic from LEGO, produced by the Samsonite corporation back in 1966. These boxes showcase the broad use of gear wheels, from dancing figures up to decorative use as Viking shields. Same as is intended now, the plate gear wheels can be anything from creating interconnecting functions of course – showing how gears works for an early age audience – to being a splash of paint.

The initial brief came from our colleagues in the design organisation, where the desire for a gear wheel outside of the LEGO Technic program arose. We wanted to create a lower-age gear system with basic technical principles, to show how gear wheels work. This fitted best in the LEGO building system. 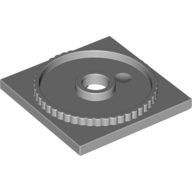 We started by using the turntable plate (Bottom W. Turntable 4X4 – 61485) for a base. The first mock-ups were round 2x2, 4x4 and 6x6 plates with glued-on 1x1 round plates so as to create gears with meshing teeth. This allowed for easy building, for children to quickly set up a gear train on a plate and play together with other bricks – much quicker than would be possible with the existing Technic gears.

The gears run freely on the turntables (‘clicking’ only happens on the interface of a 4x4 turntable with a 4x4 round 1M high brick). 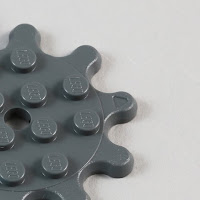 When the different gear wheel sizes interact, the knobs’ positioning in respect to each other changes. This could lead to possible building mistakes and so we added an arrow to indicate the upwards position. This arrow is used for reference in the building instructions as a mean to align the gears in the intended way.

In one of the final iterations, a chamfer on the top edge was added to allow perpendicular interaction between the gears.

We investigated the possibility of having the gear teeth meshing with round 1x1 bricks. Unfortunately, this didn’t work with the necessary module measurements of the gear teeth themselves. We also tried having knobs on the gear teeth, but the knobs’ positions would be completely out of grid (especially when moved) making building for children difficult as it’s not fitting with the gear teeth modules.

The gears are however designed to fit together with knobs placed on an array of a jumper plate followed by a 1x1, so as to build a linear actuator. Another possibility is to stack bricks with knobs on the side with one plate in between to build a vertical actuator.

Thanks so much to Marinus for sending us that fascinating insight! We were particularly intrigued by the comment about linear actuators and asked our Parts Festival participant Jaroslaw Walter to investigate. He created both the horizontal and vertical versions mentioned by Marinus in the one model. 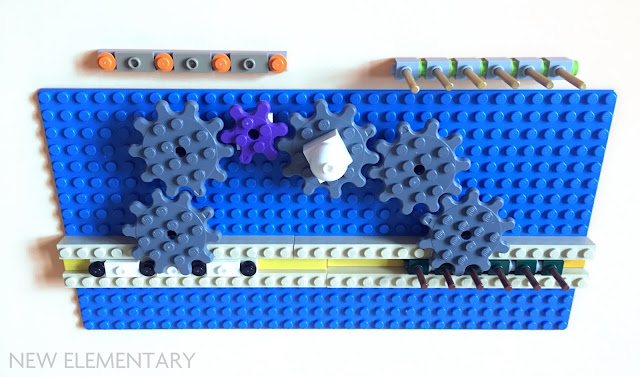 But of course, you want to see it in action!

You will have noted that Jaroslaw added bars to the vertical actuator; he did this as the gear didn't catch well. First he tried adding a round plate on top but it was too high and didn't work. It may be because the vertical version has studs 0.8mm further apart than the horizontal version, or it may just be that his particular model lacks sufficient stability. If you use this technique you could probably achieve greater stability. One thought I had is that stacking pieces wider than one module to create the vertical actuator might be more stable, as there won't be any rotation. 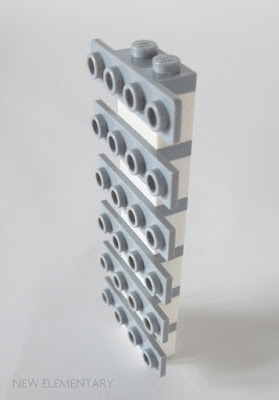 So get actuating! To date, the available splat gears are:

All content represents the opinions of New Elementary authors and not the LEGO Group. All text and images are © New Elementary unless otherwise attributed.
Posted by: Admin Posted on 9/22/2019 03:30:00 am
Email ThisBlogThis!Share to TwitterShare to FacebookShare to Pinterest
Labels: Inside LEGO, Old parts, Technique