French concept artist and architect Pierre-E Fieschi (@pierreefieschi) returns today but this time with one of our strangest briefs ever: we sent him rolls of LEGO® Xtra 854048 Road Tape & 854065 Water Tape. The products in this article were provided for free by LEGO; the author's opinions are not biased by this. Thanks to Adeel Zubair for product photography.

I was tasked by New Elementary to review and test out the decorated adhesives released in 2020 as part of the LEGO® Xtra line of accessories, before trying to include these very particular 'forbidden elements' in MOCs. A completely unusual LEGO experience for me; challenging but fun. There are 2 variants of this 15m long (49ft) roll of tape: a road print and a water print. 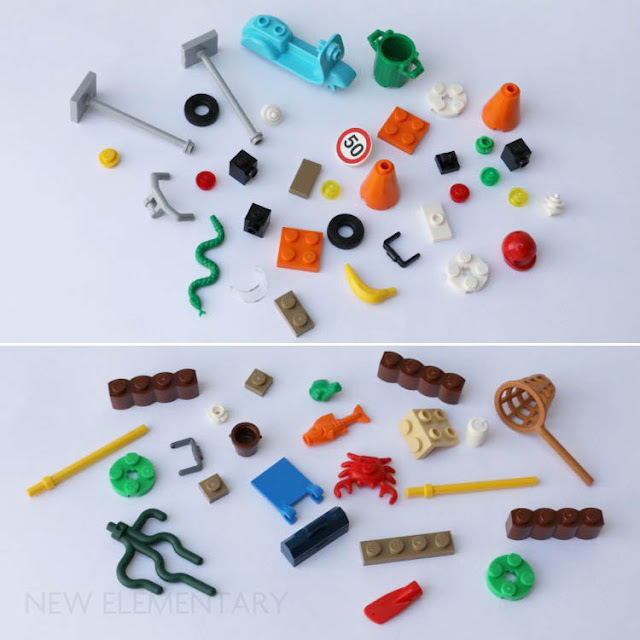 Before we go into any consideration regarding usability, here are some raw specs.

The adhesive rolls both have the same width which is theoretically 80mm. I say theoretically because I believe this is what was intended by the designer as it equals 10 LEGO modules (e.g. the length of a 1x10 brick). However, the width is slightly larger than that and varies, slightly above 81mm. I suspect this value might be a bit random as rolls of adhesive are usually printed on very wide machines and cut afterwards with a margin of imprecision.


The printed pattern is repeated every 84.75cm (once again I suspect this should be 84.8cm to equal 106 modules, and that the missing .05cm is due to printing imprecisions). Technicality aside, that is a reasonable length for the pattern not to be seen to be repeating too much, unless used in larger MOCs. 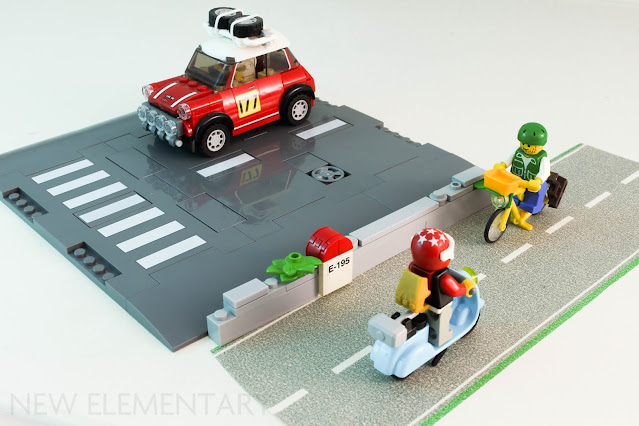 The size of the road pattern is surprising to me. It is too narrow to accommodate even the smallest of modern LEGO cars but will work perfectly as a side cycle lane – which is what the included scooter suggests. However, I can't help but notice the size of the tyre marks, which actually suggests to me that these are the perfect scale for… MICRO MACHINES. (yay!) 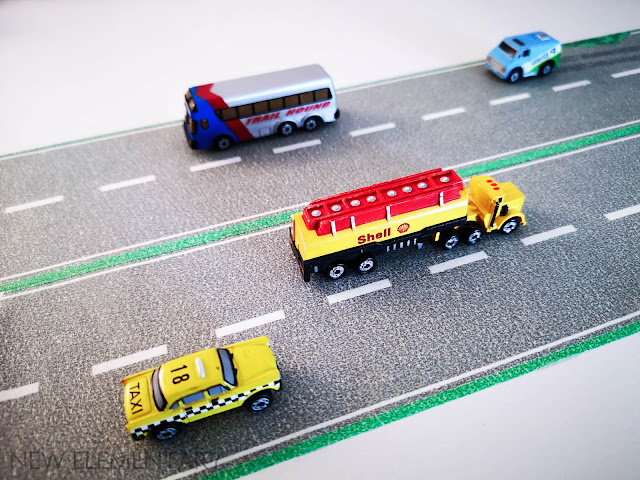 Aside from that, I wish the road pattern did not have the green outline and bush pattern, as that prevents it from being used in other contexts. My initial idea for a MOC was to make a micro aircraft carrier using the adhesive as a take-off lane but the green looked odd, and cutting it out wasn't great either. While I'm at it, I guess the tyre marks are not really useful either; they throw off the scale and are a bit too noticeable.

The print quality is a bit grainy, as is the paper itself. Do not expect a glossy plastic-looking effect. The adhesive doesn't seem to curl once placed and does not leave any glue marks when repositioned. It keeps sticking after being repositioned once or twice. I'm actually surprised at how well its sticks, while also being so easy to peel off!

Now we get to the more interesting MOC applications. Purists be warned – it is clear that this LEGO product was intended to be cut, and not used as a single element. And by cut I mean not only cut in length but cut however you like, making these Xtra elements potentially very interesting for making MOCs; even finding uses for them that are not what they were intended for.

I decided to focus on the water adhesive for my MOCs as it offers creative options that the road pattern doesn't.

I wanted to make an underwater scene using touches of the cut adhesive as background, giving a sense of depth and life (with the occasional fish and bubbles). 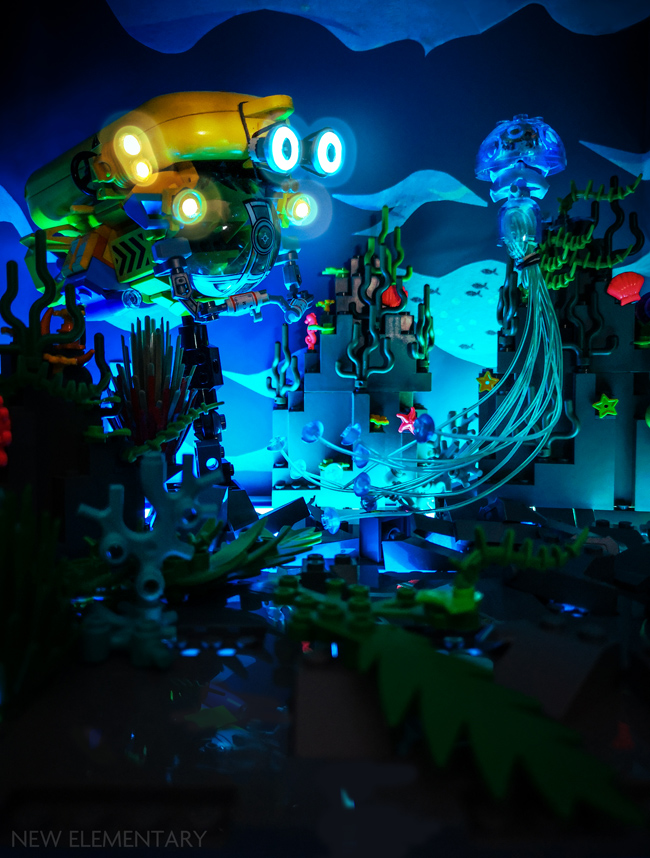 It was also an excuse to use the teal coral element (6262134 | 49577) from 2019 and to mix DUPLO with Clikits, while lighting the whole thing from underneath! The entire thing was wildly out of my comfort zone, and a nightmare to shoot, but really fun to put together and a great experience. 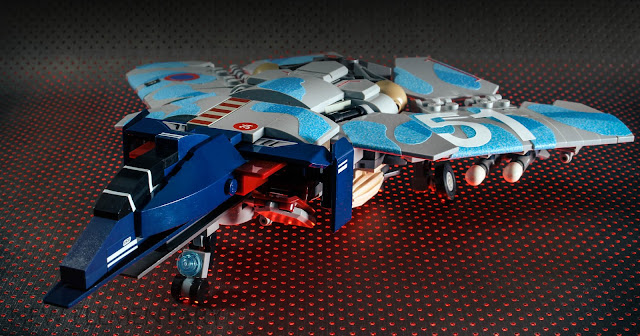 Talking about comfort zones, this was much easier for me. I cropped out all of the fish and bubbles to just use the two-tone blue print of the water adhesive as camouflage on a stealth plane. 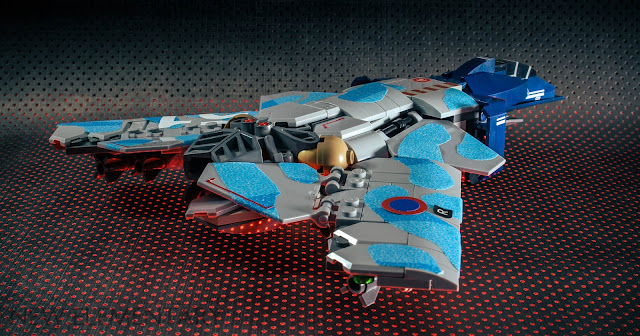 Now, that's probably a bit redundant but we rarely get the chance to make purist, organic looking camouflage!

To sum up, these are very nice options for kids to easily create scenery, or for the wilder creatives out there that are not afraid to use scissors. The ability to re-apply the tape a couple of times is impressive but some things could be improved on, especially with the road print. A (precisely) 8-module wide single lane would have had wider applications.

If you're looking for proper sized roads (that can do sci-fi as well), I strongly recommend the new 60304 Road Plates instead. But if you are buying the LEGO tape rolls, consider using our affiliate links: UK LEGO Shop | USA LEGO Shop | Australia LEGO Shop, for other countries 'Change Region'. New Elementary may get a commission.

Posted by: Admin Posted on 2/11/2021 04:52:00 am
Email ThisBlogThis!Share to TwitterShare to FacebookShare to Pinterest
Labels: MOC, Set review, Unofficial parts