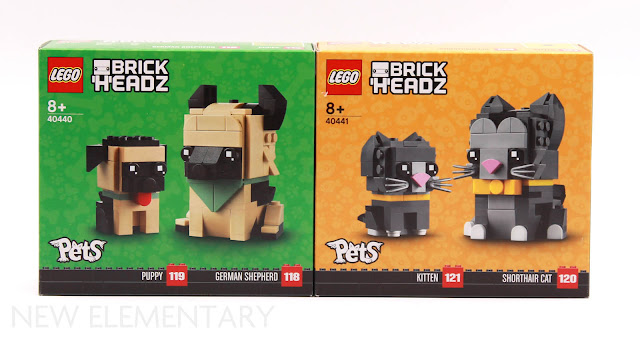 Before examining the sets’ inventories, I wanted to take a quick look at the boxes. 40440 German Shepherd and 40441 Shorthair Cats both have a ‘Pets’ logo in the bottom left corner, stylized with cat ears, a dog paw, a bird wing and a fish tail. I wonder, could this mark the beginning of a new distinct sub-series and hint at a pair of birds and fishes coming soon?

Despite their difference in price, the three sets have a similar parts count (respectively 247, 250 and 249 pieces), and the sets’ inventories mainly consist of plates in basic colours.

A nice design detail that can be easily noticed here is the colours of the parts used to build the Pets’ internal structure: the German Shepherd have Bright Blue/ Blue bricks and a Dark Green/ Green 2x2 round plate, whereas the Shorthair Cats use Green bricks and Blue 2x2 round plates. 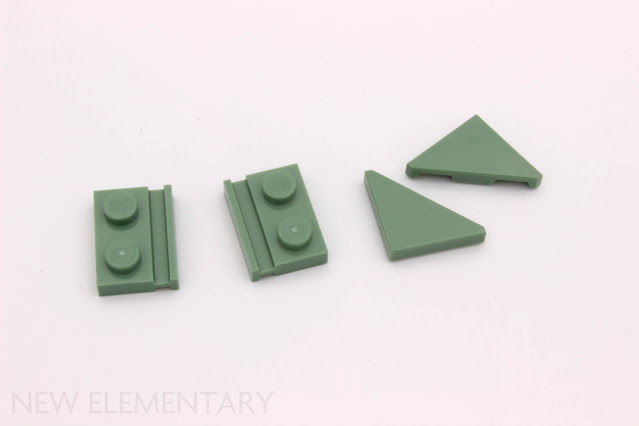 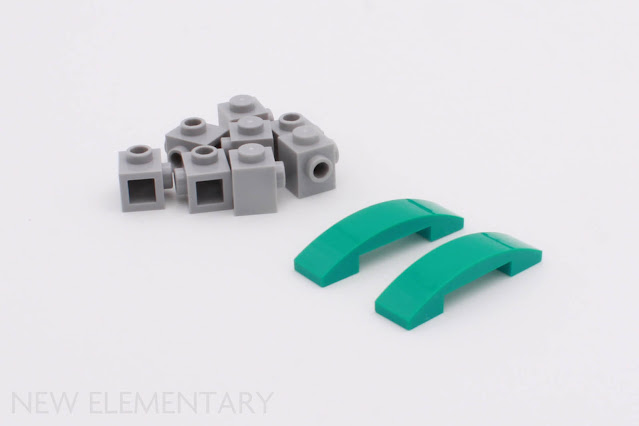 Although this element is not really rare, I think it’s worth pointing out that the set comes with eight Bricks Special 1 x 1 with Studs on 2 Adjacent Sides in Medium Stone Grey/ Light Bluish Gray (6267495 | 26604). It’s one of the smallest sets to include these elements, and 21318 Treehouse is the only set to have more of them: they appear 20 times there. 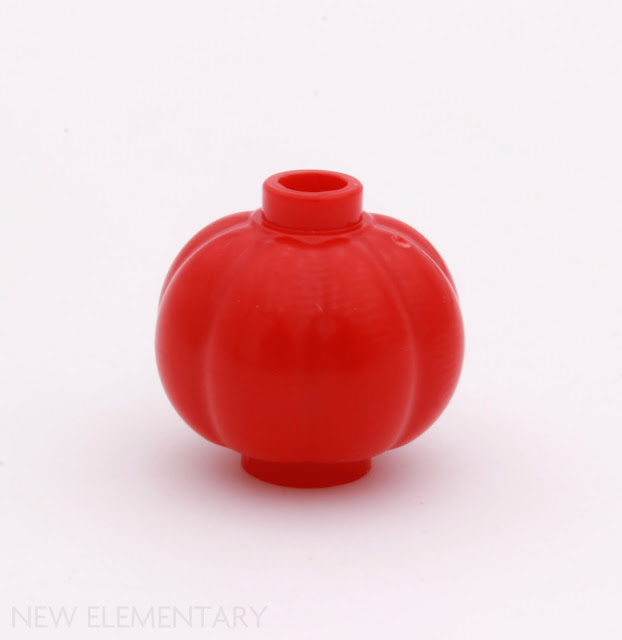 Although the sets are built in a rather simple way, I’ve noticed a surprising technique while building the Shorthair Cat’s head: at one point, one of the twelve Bricks 1 x 2 x 1 2/3 with Four Studs on One Side (22885) is simply slid between two parts and is only secured when more 22885’s are put on top of it.

I know of at least one other BrickHeadz that use this technique, 41607 Gamora, but maybe there’s more. If you do know of other sets that use a similar or identical technique, let us know in the comments. 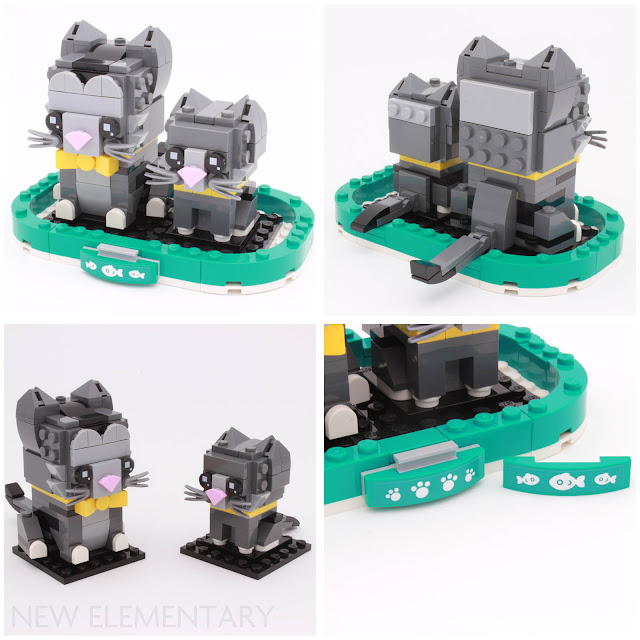 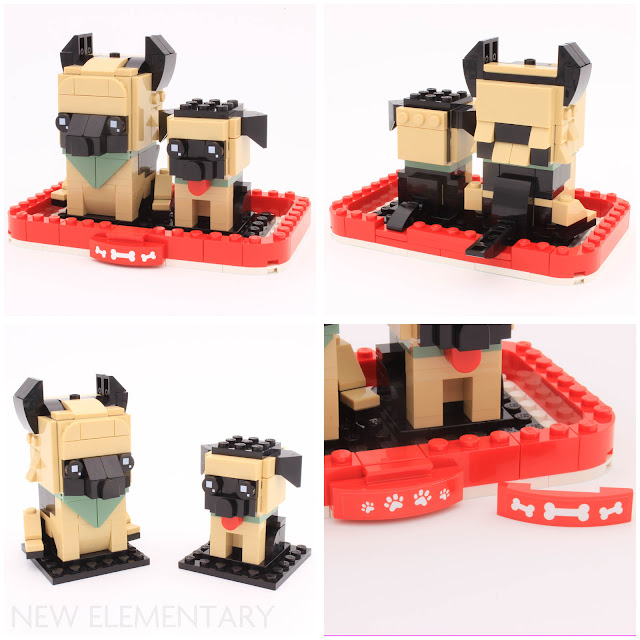 The pets are among the rare BrickHeadz sets to use stickers. They’re used to decorate the front of the baskets, and it’s possible to choose between two patterns: paws and bones for the dogs, and paws and fishes for the cats. It is also possible to remove the baseplates from the baskets to display the sets separately or among your other BrickHeadz. 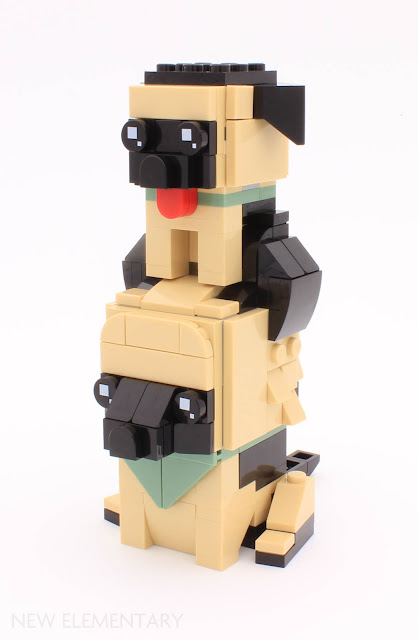 There is a 2x1 jumper plate on the top of the dog’s and the cat’s heads, but I’m not sure why. It is possible to have the puppy sit on the adult dog’s head, but it’s not possible to do it with the cats. The descriptions of both sets mention a movable tail so I thought the sets had a mechanism, a bit like 40436 Lucky Cat, and that the jumper plates were a button to push to make the tail move. 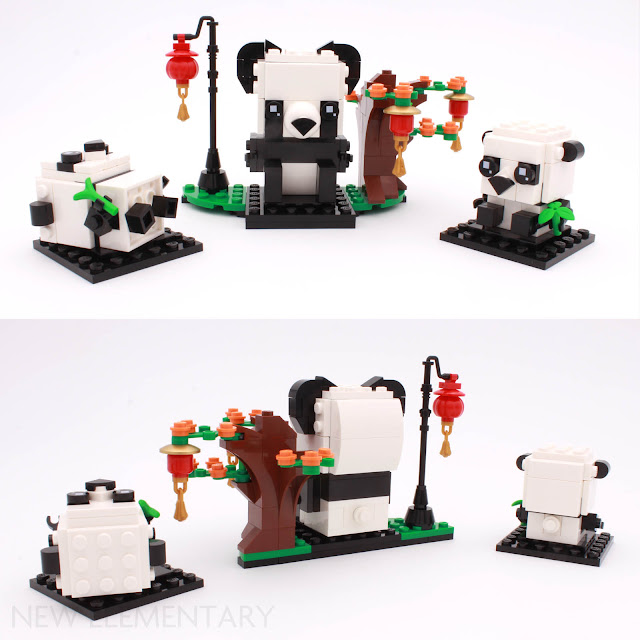 The baby pandas have their own baseplates, and the mother’s is surrounded by a lantern and a mandarin orange tree. One of the babies is sitting, and the other is lying down. It is, however, possible to have it stand up (you’d need to put it on the other cub’s baseplate), and whereas it doesn’t have a tail, you can use the spare parts to add one.

I’ve noticed a small issue with the mother panda. The BrickHeadz characters are attached to their baseplates using a Plate 1x4 with two studs (41740), which allows for easy removal of the characters. However, in this case, even with only two studs, there is too much friction between the baseplate and the panda, so when I remove her from the baseplate, the plate 1x4 stays attached. 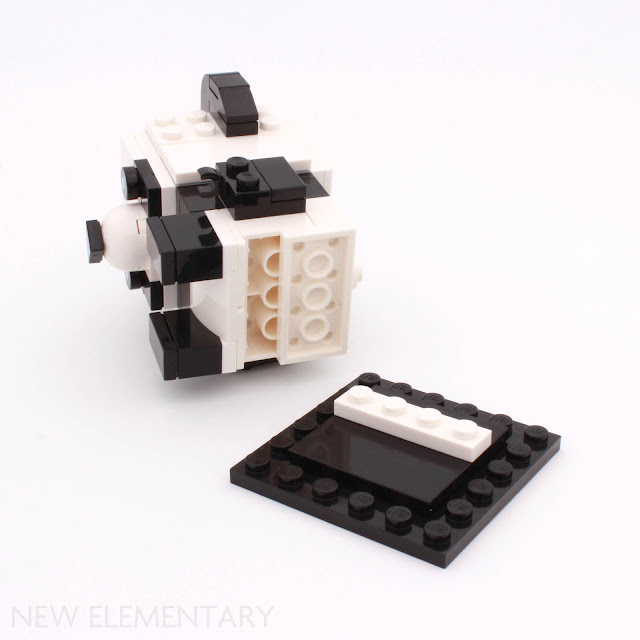 I must say I’m quite disappointed by the low quantity of interesting elements in these sets. There were some simple ways to change this: put the blue and green pieces inside the adult Pets in different colours, swap the colours of the baskets – the Brick Round Corner 4 x 4 Macaroni (48092) hasn’t been seen in Red since 2012, and the smaller Brick Round Corner 2 x 2 Macaroni (85080) has appeared in Dark Turquoise in three sets only. The cats’ ears could have been made with Wedges 2 x 2 Pointed with Stud Notches (66956) in Dark Stone Grey / Dark Bluish Gray instead of pairs of Wedges 2 x 1 with Stud Notch Right/Left (29119/29120), and their whiskers could have been made in grey as well instead of the more common Silver Metallic/ Flat Silver. I guess the designers had to work with a limited palette and couldn’t introduce any new element for these sets, but still, it’s a bit of a shame. 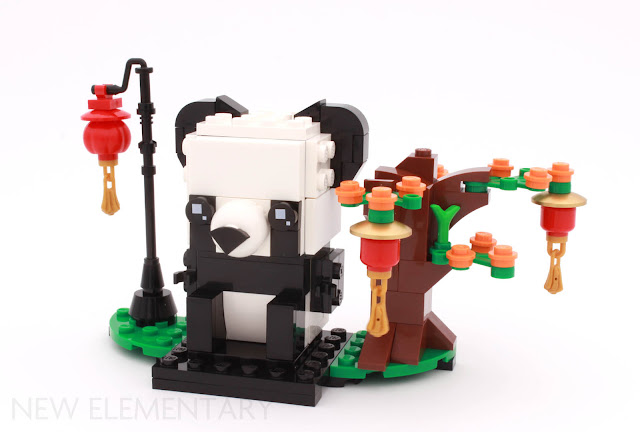 The mother panda’s build is very similar to that of 40379 Valentine’s Bear and I wish it was unique to differentiate the Panda from the plush bear, but I might be a bit biased here since I’ve made my own BrickHeadz panda a few years ago.

In the end the sets themselves are cute (well, for BrickHeadz) and will certainly please kids who love animals, but AFOLs who want to expand their collection with new parts will certainly pass on these sets. If you do purchase from LEGO.com consider using our affiliate links: UK LEGO Shop | USA LEGO Shop | Australia LEGO Shop, for other countries 'Change Region'. New Elementary may get a commission.

READ MORE: LEGO® Technic 42120 Rescue Hovercraft has new recolours in orange plus some of the new 2021 moulds