Aron Gerencsér (@_pohaturon) continues to work through the 2021 LEGO® Monkie Kid sets with 80022 Spider Queen's Arachnoid Base. It is available from tomorrow, 1 March 2021 along with the rest of the range, so get ready! – and please consider using our affiliate links: UK LEGO Shop | USA LEGO Shop | Australia LEGO Shop, for other countries 'Change Region'. New Elementary may get a commission. The products in this article were provided for free by LEGO; the author's opinions are not biased by this. 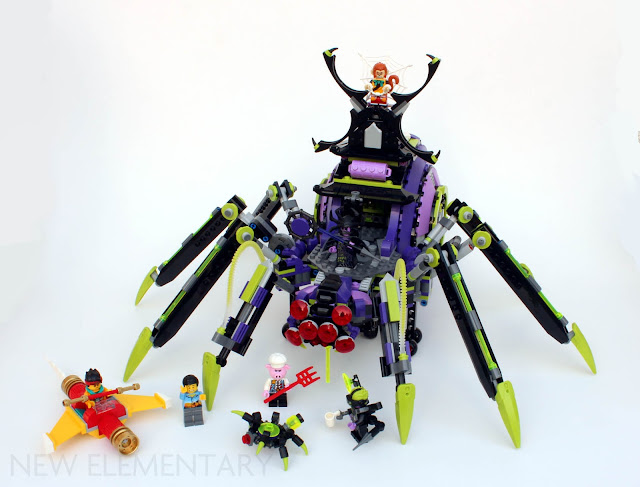 80022 contains three new moulds for 2021; two of which it shares with other sets in this wave of Monkie Kid, and one which has previously appeared in 75301 Luke Skywalker's X-wing Fighter. There are also some new minifig-related moulds to look at, but we’ll get to those alongside the figs themselves.

We also get 4 of Brick 1x1, W/ Cross Hole in Medium Stone Grey/ Light Bluish Gray (66336539 | 73230), which previously only appeared in the aforementioned Star Wars set - though that contains 8! I’m quite excited by this new mould, as its counterpart with a pin hole has been around for ages, but the change to an axle hole offers some new - primarily structural - opportunities. That said, I can totally see microscale builders make use of it for detailing. 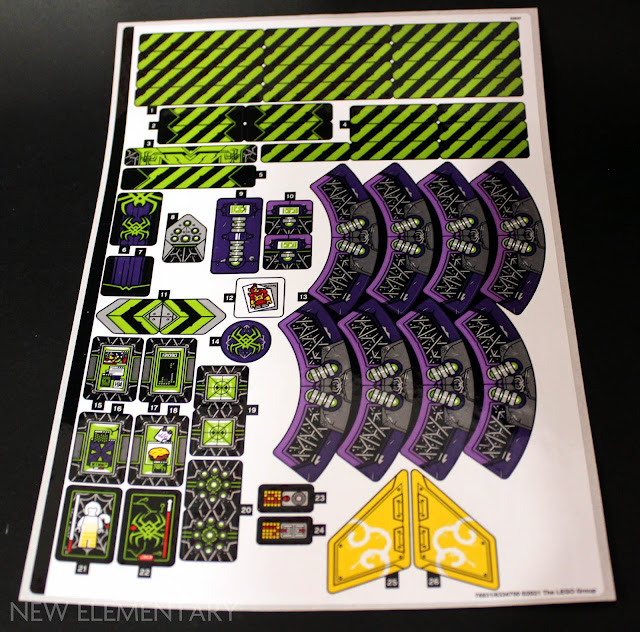 The set also comes with a rather large sticker sheet. I decided not to apply them, because most of these stickers go on the fancy new recoloured pieces we get, and would severely limit their versatility.

The recolours in 80022 had me even more hyped than the new moulds - aside from some pieces coming in the generally rare purple tones, we’ve also got an absolutely delightful new Constraction piece recolour! 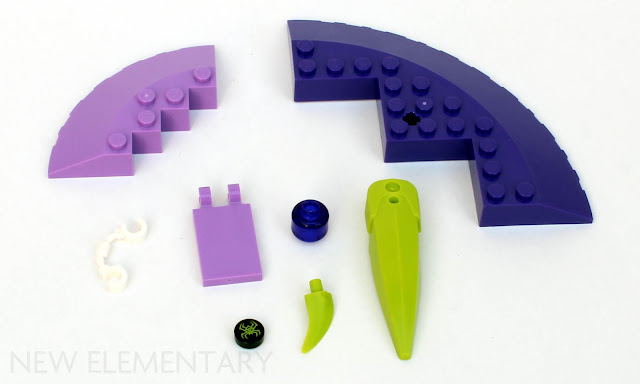 The large lime claw piece, known among Constraction builders as the IFB claw as it was first introduced in the Invasion from Below wave of the Hero Factory theme, is by far the most exciting recolour in this set for me, and I’m delighted that we get so many right off the bat. The IFB claw has become an essential piece in the Bionicle MOC-making “meta”, and is often extremely useful for organic shaping due to its slight curve. This is the 12th colour the piece is available in, but even so I eagerly await more. 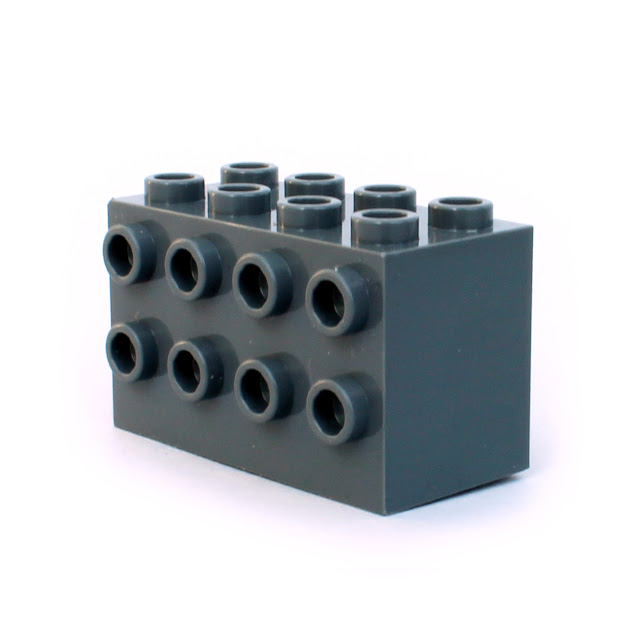 EDIT: This brick is such an old mould in such a common colour, we didn't spot it is actually new when first reviewing this set! Brick Special 2 x 4 x 2 with Studs on Sides (2434) was introduced in 1990, appearing first in M:Tron, and was only moulded in 5 colours before disappearing in 2016. But no, it's back – and in Dark Bluish Gray (6337521) for the first time! With the advent of newer SNOT bricks, it has become a POOP in hindsight – a retropoop perhaps? – but clearly still has its use as far as some LEGO designers are concerned.

80022 comes with a nice supply of otherwise rare pieces. Unsurprisingly, the colours generally follow the black, lime and purple colour scheme of the overall set - Spider Queen’s Arachnoid Base has a structure with few of the technicoloured internal bits that often appear in sets, thus there isn’t much room for colour deviance anyway. 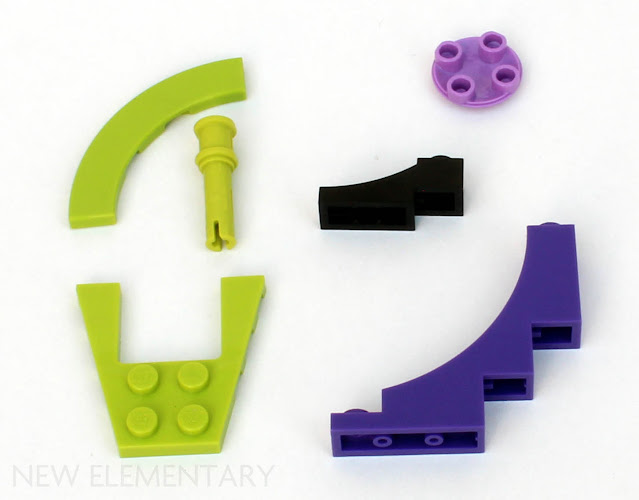 80022 Spider Queen’s Arachnoid Base comes with 6 minifigures who sport one recolour and two new moulds between them.

80022 Spider Queen’s Arachnoid Base takes shape over the course of 9 bags. We start off by building Monkie Kid’s rather lackluster flying machine.

After all previous sets in the wave featured fantastic little side-builds, the mediocrity of this little flyer hits harder, but I’m happy to say that this is the only issue with the set and we get it out of the way pretty quick. On paper designing a little plane with the gold-tipped red Bo sounds like a neat idea but the build itself is *waggles hand midair*.

Things pick up speed when we move onto the actual Arachnoid Base by building a little prison area that is the lowest level of the abdomen. Then we start putting together the structure of the cephalothorax where the legs and main play feature will also be connected. There is a fair bit of Technic involved to give everything the required sturdiness to weather extended play, but due to the rather flat build very little ends up being covered up, so we get a little less technicoloured internal construction than usual. A Technic beam armature with 6 small wheels is built here, since the spider legs wouldn’t be able to actually support the whole thing. 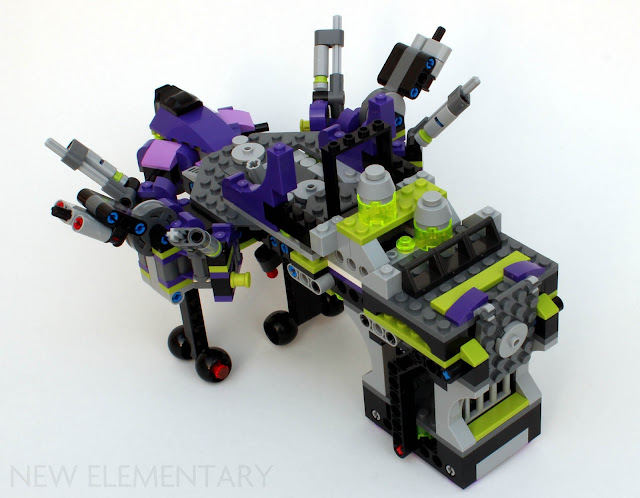 Focus shifts back to the abdomen, which houses the main interior section of the base portion of this massive mechanical beast. The front facade of the tower structure is designed to evoke the architecture of a pagoda, using those new roof corner pieces together with Brick 1X3, Outside Half Arch,W/ Cutout in Black (6328095 | 70681). 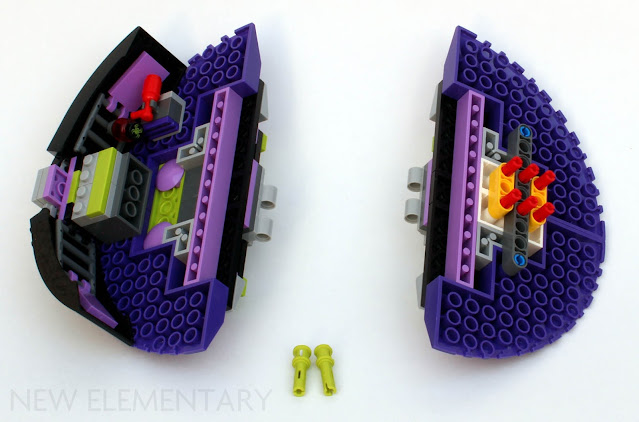 Next up comes a bit of repetition as we build the large circular, hinged modules that will cover either side of the current structure while also completing the spider villain headquarters. The rear portion of these can be opened up revealing an interior space we’ll explore further once the model is complete. 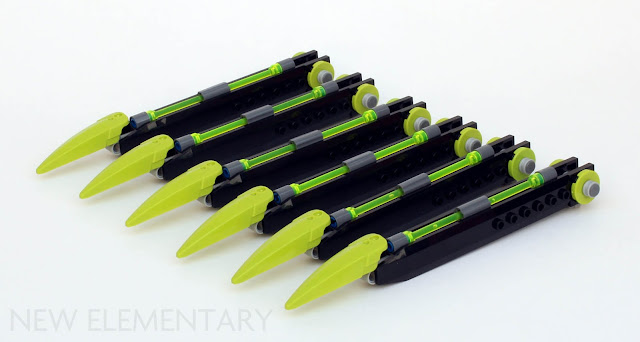 Now that the rear is finished, it’s time to build the spider’s head, using some fun ways to connect the large red eyes, as well as the two forelegs that connect to the play feature we laid the foundations for earlier. The 6 remaining legs - built just before -  are identical, so there’s some more repetition there. 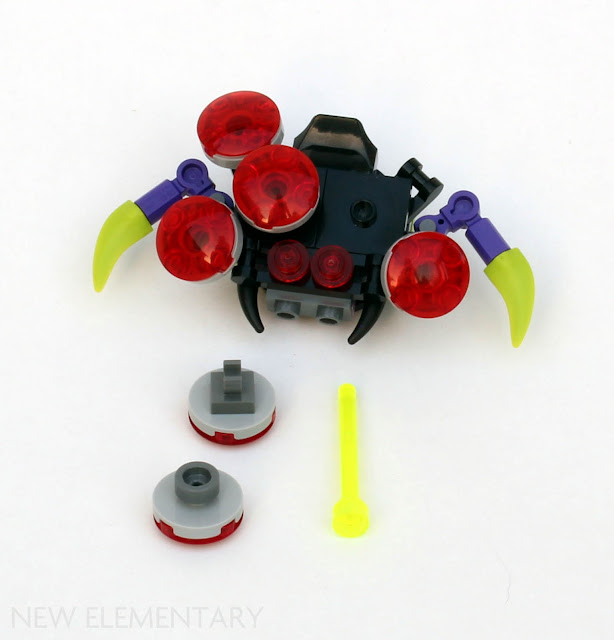 We complete the model with a freaky altar at the top of the pagoda where the imprisoned Monkey King can be displayed. Overall, the build process brings the measure of fun expected from a set like this, but is a little heavy on repetition. 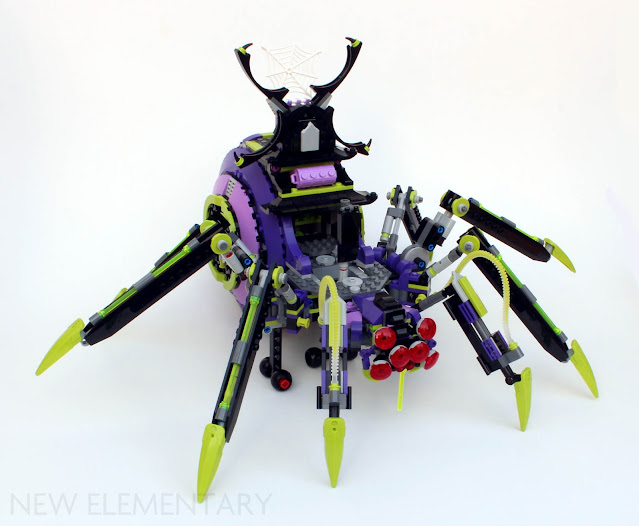 80022 Spider Queen’s Arachnoid Base is a large, imposing model even when we account for the spindly legs making out much of the footprint. As the only set in this wave dedicated to the spider villains, it had to pay them proper homage - no small responsibility, but 80022 fulfills it admirably.

The two foremost legs are connected to a small Technic mechanism which allows us to move them up and down either together or separately. This flag is only connected with a 3.18mm bar that sometimes struggles with the weight of the legs, but the feature - which I’m certain is heavily inspired by the function operating on the same basis found in BIONICLE 71314 Storm Beast - works well enough, and adds a measure of expressiveness to the spider. I interpret the Spider Queen’s large staff as a means of control over the living base, so it is even cooler when we replace the flag with it. Of the remaining 6 legs, only 2 have any articulation, and that is limited to a single ratchet joint. I would have appreciated the possibility of posing the legs, but that would have meant structural compromises. 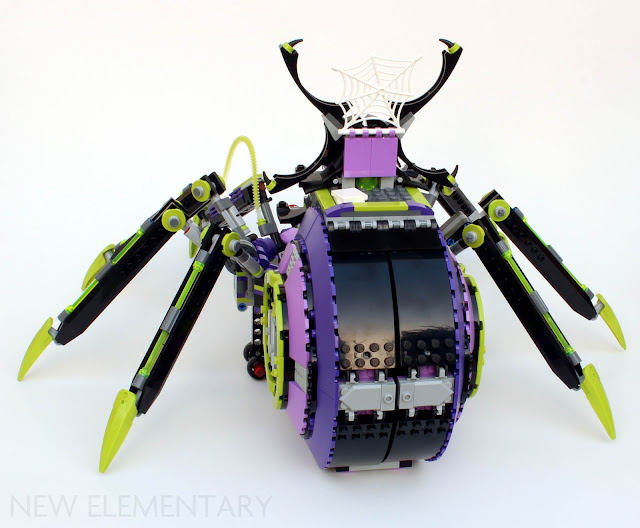 Moving to the back of the model we get to the main attraction - the opening base section. On top of the roof, behind the altar is a small office area which, if stickered up, would feature displays with biometric data and some newspapers. Admittedly it’s a little bare without the stickers, but the opening interior is the focus anyway. 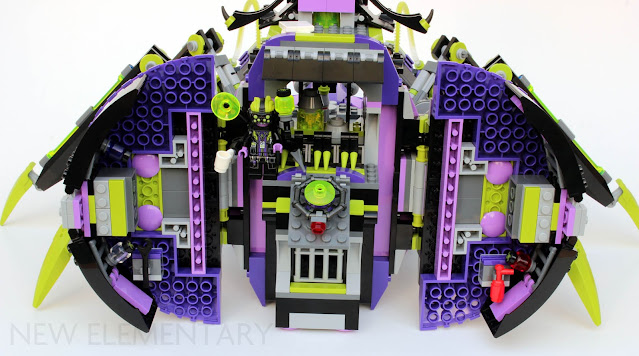 Inside, we can see the prison on the lowest floor, while the rest of the base acts as a workshop for Syntax. This is essentially a maintenance station for those 6-legged spider drones we’ve seen popping up throughout the wave. Instagram follower @romakesbadmocs points out the in-show explanation of why they are 6-legged is because the drones are intended to attach to minifigs, who provide the remaining 2. This workshop area is stocked with barrels of a mysterious transparent green substance - what evil lair is complete without them? - a rack to store the drone’s legs, and a flip-up work table where the body of the drone can be placed. On the inner surface of either opening flap are more displays (here unstickered) and racks where different colours of minifigure heads are located, complete with clips used to attach them to the drone body. The idea here is that Syntax can customize the included drone with the different abdomens, which I assume impart different characteristics or abilities - in my headcanon, the transparent green one makes it poisonous, the red one gives it fire abilities, the purple one makes it electrified (going off Slizers) and the trans-clear one is an innocuous “control” abdomen. 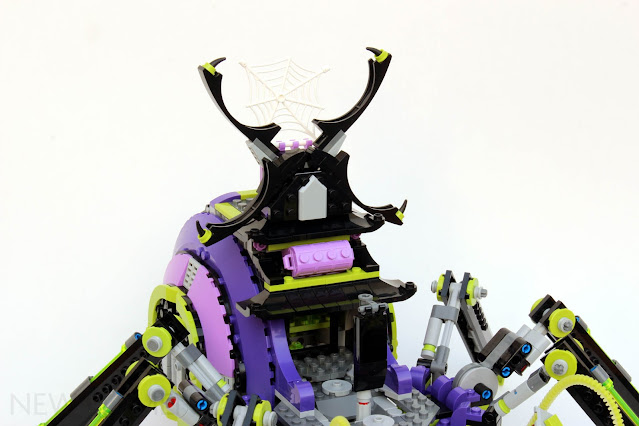 Children will definitely have tons of fun letting their imagination loose and playing out various rescue scenarios where Monkie Kid saves the imprisoned Monkey King with this set, though there is a suspicious lack of any kind of spring loaded shooters or stud launchers. I personally don’t mind, but imagine some kids will customise the flying machine with a bit of weaponry - it’s the weakest portion of the set anyway.

80022 Spider Queen’s Arachnoid Base is a pretty strong contender for the top spot, and while ultimately I can’t rate it higher than 80020 White Dragon Horse Jet (which I absolutely adore) it is an easy second place. This set features the highest quantity of the new bar holder pieces, and has them in both colours right of the bat. It also has the highest quantity of the new corner roof piece, alongside a lovely selection of recolours, with the lime IFB claw being a huge standout for Constraction builders. Alongside the new and rare parts, the inventory is pretty well stocked with all round useful pieces too if you are looking for a parts pack. 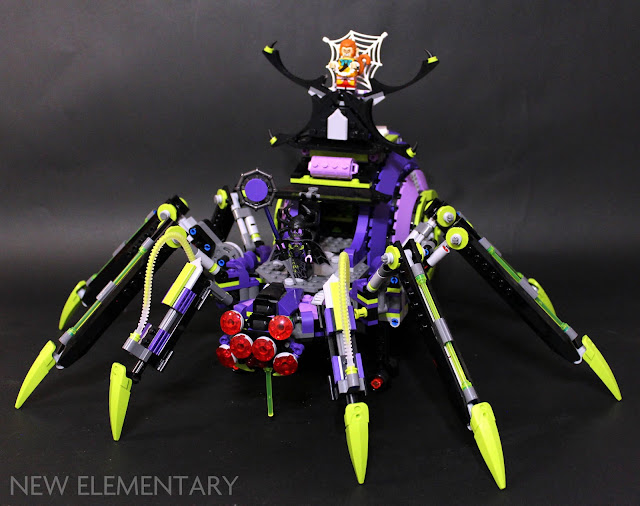 As a set, the main completed model sports a striking colour scheme coupled with a great design - if only the small flying machine wasn’t so bland! The build process could do with a little less repetition, but once we’re done with it the spider base offers plenty of playing potential with the opening interior section, and looks gorgeous on display. It might carry the “Monkie Kid tax”, but if we look past price-per-part ratios this set is definitely worth every dime. If you are buying this set once it is released tomorrow, 1 March, consider using our affiliate links: UK LEGO Shop | USA LEGO Shop | Australia LEGO Shop, for other countries 'Change Region'. New Elementary may get a commission.

Posted by: Admin Posted on 2/28/2021 10:44:00 am
Email ThisBlogThis!Share to TwitterShare to FacebookShare to Pinterest
Labels: CCBS, Monkie Kid, Set review