Aron Gerencsér (on Flickr) kicks off his series of 2021 LEGO® Monkie Kid set reviews today, commencing with the stunning 80020 White Dragon Horse Jet. Buying this set when it is released 1 March? Consider using our affiliate links: UK LEGO Shop | USA LEGO Shop | Australia LEGO Shop, for other countries 'Change Region'. New Elementary may get a commission. The products in this article were provided for free by LEGO; the author's opinions are not biased by this. 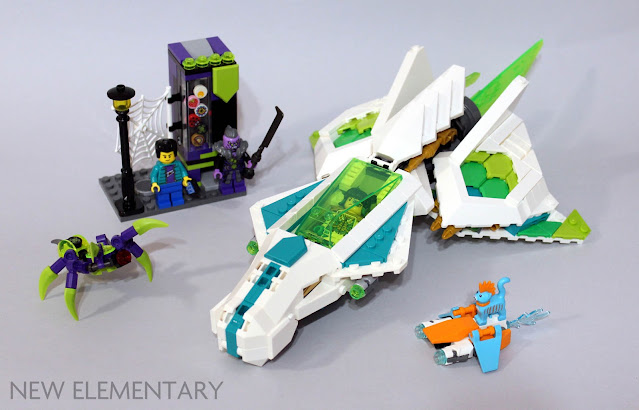 80020 features two new moulds, one of which is a minifigure hair piece. The other is a recurring piece throughout the wave that was first spotted when 80023 Monkie Kid’s Team Dronecopter was announced at the beginning of the year. 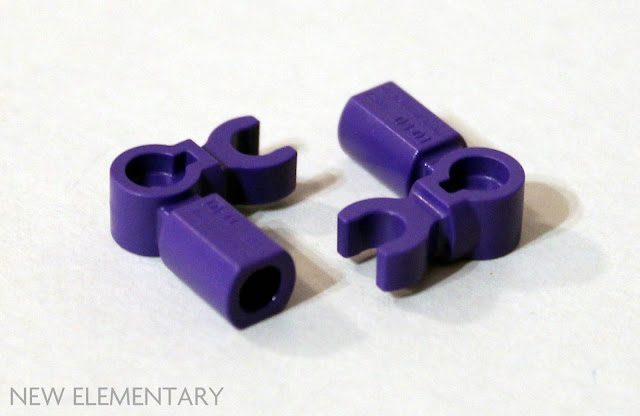 This is a new member of the ‘bar holder’ element family, moulded at a 90° bend with a clip on one end and a 3.18 mm bar hole on the other. When the images of 80023 first popped up, I had hoped that we were looking at a small joint piece that the existing clip pieces such as Bar Holder with Clip (44873) could connect to, but as we now see it’s one solid ‘elbow’ piece. This does provide fewer exciting prospects but it is still an exciting new mould. The circular indent at the elbow section is too large to clutch a bar, unfortunately. The longer section is exactly two modules wide, whereas the shorter one is one and a half.

80020 is much more bountiful on the recolour front, with a very welcome surprise. Despite being the primary colour of the jet, no new white parts are included - the focus is largely on the broad range of green accent colours. 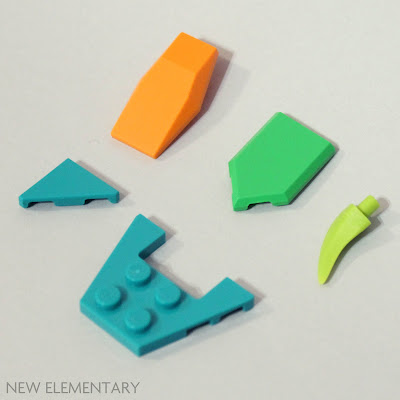 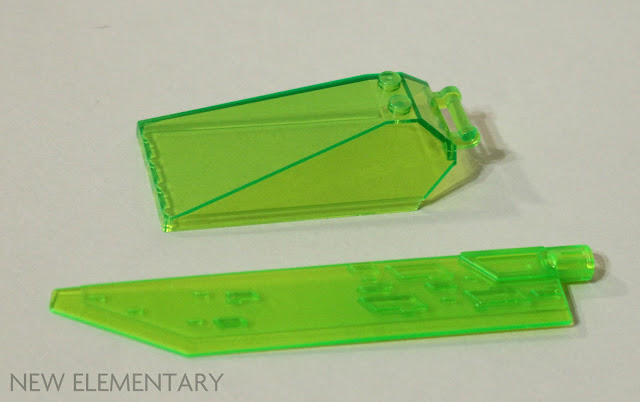 I was particularly delighted by the appearance of the orange Constraction armour piece, however am positively maddened by the fact that we only get the one across the entire wave! 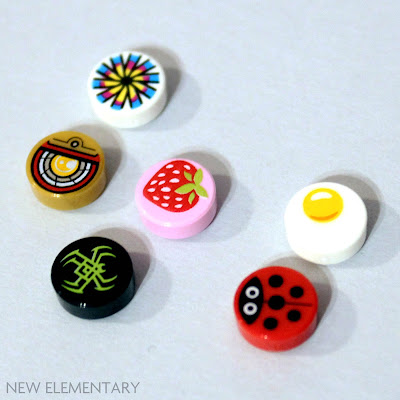 On the print front, we get a broad selection of 1x1 round tiles, one of which sports a new motif.

The black tile with the spider print (6334604) debuts in this wave of Monkie Kid, and is frequently used by the arachnoid baddies. We’re supplied with 5 in 80020.

While that wraps up all that is new in White Dragon Horse Jet, there are several pieces in the set which have only appeared in a few, expensive sets prior - some in decent quantities. 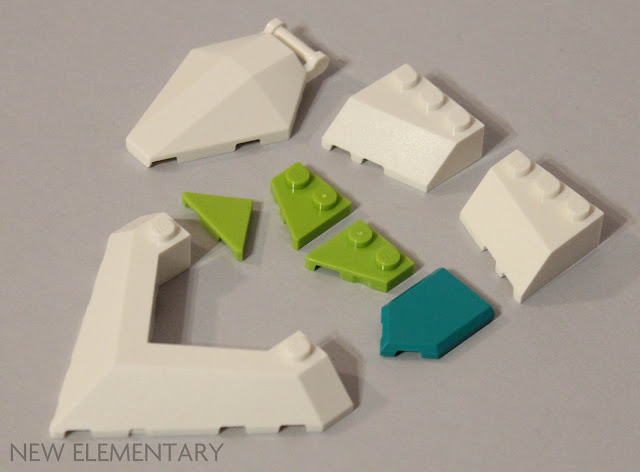 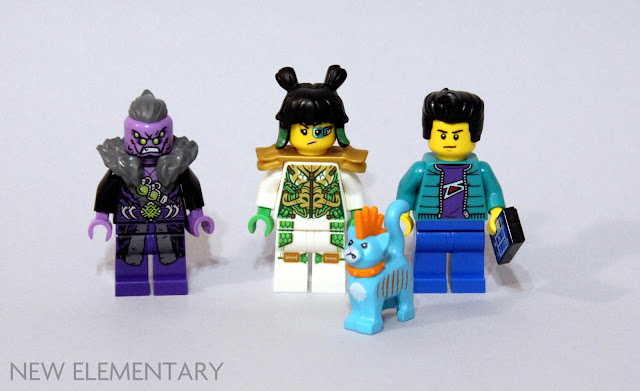 80020 contains three minifigures and Mo, who is by far the coolest member of the entourage. Huntsman, the new spider henchman, sports a new Mini Wig mold in Dark Stone Grey/ Dark Bluish Gray (6338388 | 75512). His fur collar is also new in that colour. 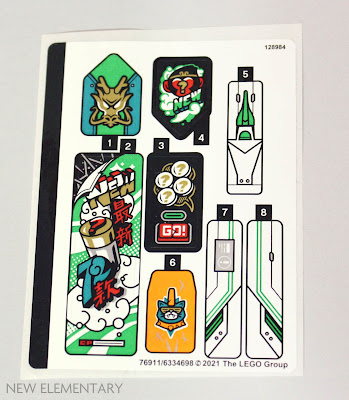 We’ve also got an exclusive sticker sheet, as one does. This time around I chose not to apply stickers to retain the versatility of the parts for my article of MOCs.

White Dragon Horse Jet takes shape over the course of six bags, and the process begins by constructing a small but surprisingly fun bit of scenery. This will be a returning motif of my reviews of these sets - they sport consistently impressive side-builds, which in one case even surpass the main model. 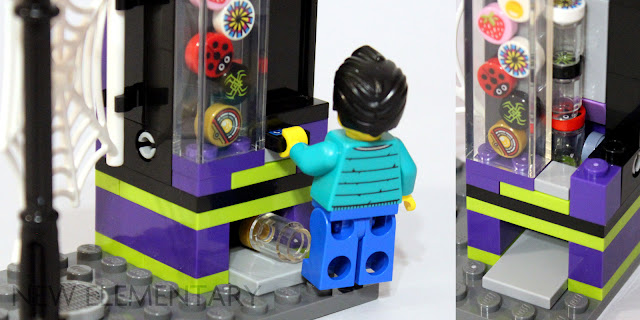 While this is not the case here, the functioning vending machine is a nice touch, with an interesting technique of packing round 1x1 tiles into a transparent tall brick. I’m absolutely convinced I’ve seen this in a set before, but can’t put my finger on where. Our lad-in-distress can use his phone to pay for a drink - very modern of the designers to embrace cashless payment methods - and subsequently get caught up in the nearby spider web.

This brings us to another recurring side-build. Throughout the sets in this wave, the arachnoid baddies deploy (egregiously six-legged) spider drones. Though each one is subtly varied, they are all built around a frame of a parabolic ring (75937) with the new bar holder pieces as legs. Mo also gets a  souped-up hoverboard, which is a simple build but well executed.

As we get into building the titular jet itself, things steadily ramp up. We start off with some simple structural plate stacking and simple sideways-building to fill out the sides. At this point a cool-looking green gradient gets incorporated into the frame which, tragically, ends up being completely invisible. 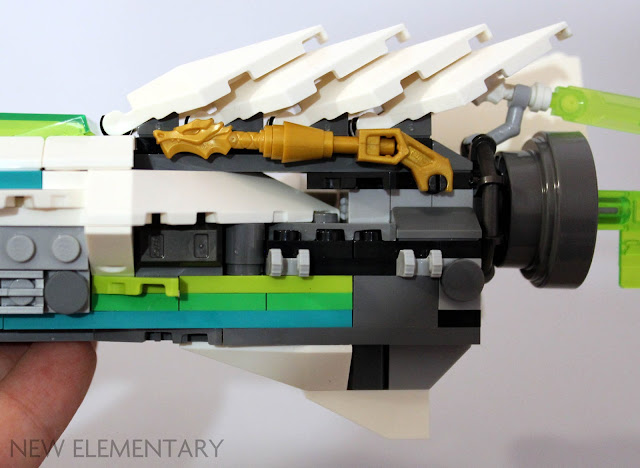 The real juice hits when we get to building the jet’s front. 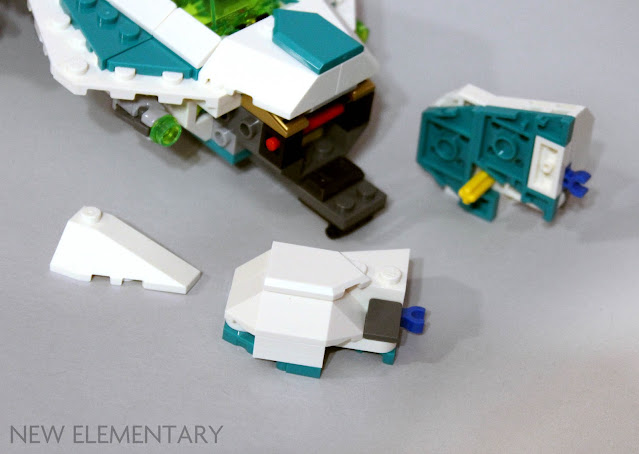 A pair of gold-lacquered slopes represent the eyes of the horse head that the front section of the vehicle is supposed to represent, and the way the nose is built up of sandwiched wedges and plates is surprising to see in an official set. A bit of Technic is used for the studless connection, and the entire assembly is affixed to the fuselage with an internal bar. It’s all then locked into place with further wedges.

However, the best bit - which I was hyped for ever since laying eyes on the box - is yet to come. 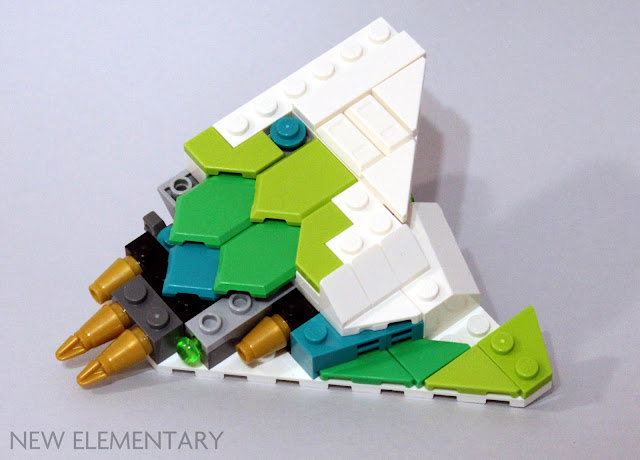 When the main body of the jet is done, we move onto the two wings with the engine pods that feature an impressive green  gradient of hexagons, framed by the large white roof element. I’m trying to strike a balance here of showing off how great this sub-assembly is while also not spoiling it all - builders really ought to experience this kind of stuff first-hand.

When the model was complete, I was almost sad the build was over - but we have a lovely jet in our hands, so it’s okay. 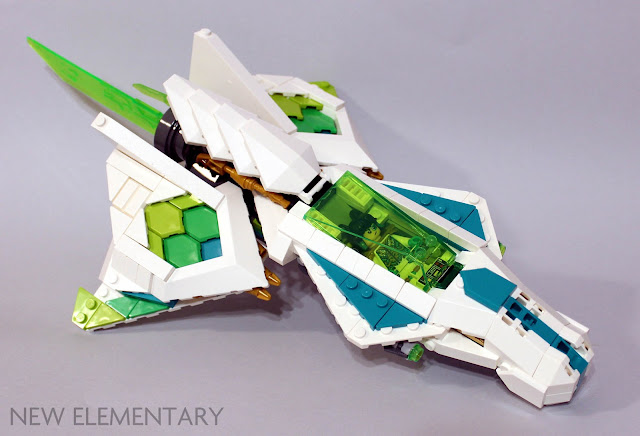 80020 has a surprisingly involved and unexpected building process, and the set still has a lot to offer when complete.

A unique design with striking colours, the White Dragon Horse Jet has some fancy shaping going on and those engine pods are absolutely lovely. The ship is sturdy and highly swooshable, and the wings are attached with a pair of click hinges, allowing you to fold them up for landing. 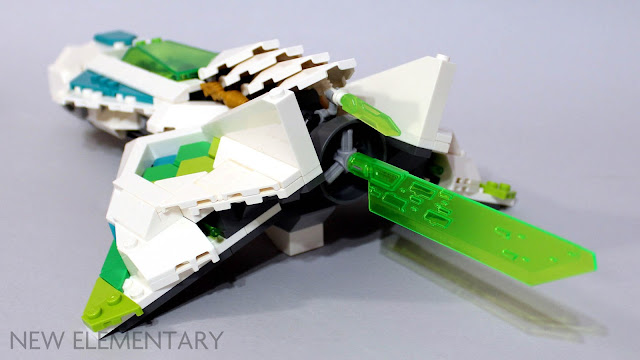 The transparent bright green sword piece works well enough as an exhaust wake, and the layered panels up top hide weapon storage for Mei’s sword. The blade of the sword is very much in plain sight, but being similar to the engine wake both in colour and shape ensures that it doesn’t look too out of place. The way the spring-loaded launchers are embedded into the wings means we don’t have clumsy, colourful bars sticking out of places they shouldn’t - even when the ammo is loaded.

With an armament of two spring loaded launchers and two stud shooters, the jet is well armed for youngsters to blow up spider drones with. The golden highlights around the engine areas accent the white and greens nicely. Now, I’m not much of a set collector - I simply do not have the display space - so just about everything immediately gets disassembled. The fact that I’m contemplating keeping 80020 built despite this and its abundance of useful parts for MOC building is testament to its greatness.

I’ve been reviewing stuff professionally for years, from video games to gadgets to LEGO® sets, and I always feel like a bit of a hack when gushing about something or unilaterally praising it - but dammit, I just can’t find a fault here. We get a main model that is very solid, study and amazingly designed with some techniques I’d sooner expect to see in top-tier MOCs than official sets. We have a fun little side build that feels completely justified, and packs a neat feature. We’ve got a hoverboard with a recoloured Constraction piece straddled by a cat; a girl hero saving a dude in distress; a funky spider drone with an exciting new mould for legs, uninvasive stickers which do not detract from the final model if not applied; well-integrated features for the kids that don’t compromise the aesthetics and plenty of interesting recolours.

It’s only February, but we already have a very strong Set Of The Year candidate on our hands. More of this, please!

Posted by: Admin Posted on 2/21/2021 01:00:00 am
Email ThisBlogThis!Share to TwitterShare to FacebookShare to Pinterest
Labels: CCBS, Monkie Kid, Set review