Aron Gerencsér (on Flickr) already has another 2021 LEGO® Monkie Kid review for you today – two little ones actually! 80018 Monkie Kid’s Cloud Bike & 80019 Red Son’s Inferno Jet. Buying Monkie Kid sets? Consider using our affiliate links: UK LEGO Shop | USA LEGO Shop | Australia LEGO Shop, for other countries 'Change Region'. New Elementary may get a commission. The products in this article were provided for free by LEGO; the author's opinions are not biased by this. 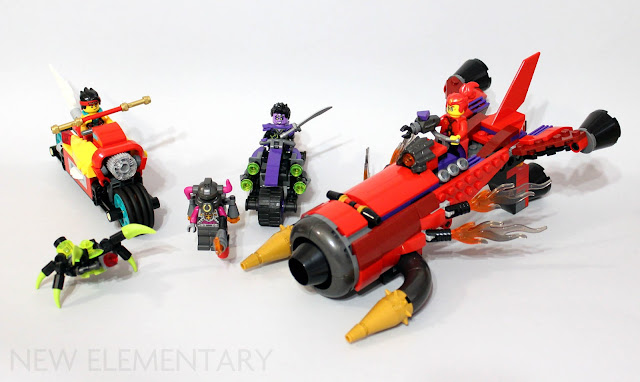 There is just one new mould in these sets, appearing in 80018 and is plentiful throughout the wave. We covered this new bar holder piece in our review of 80020 White Dragon Horse Jet, where it appears in dark purple. 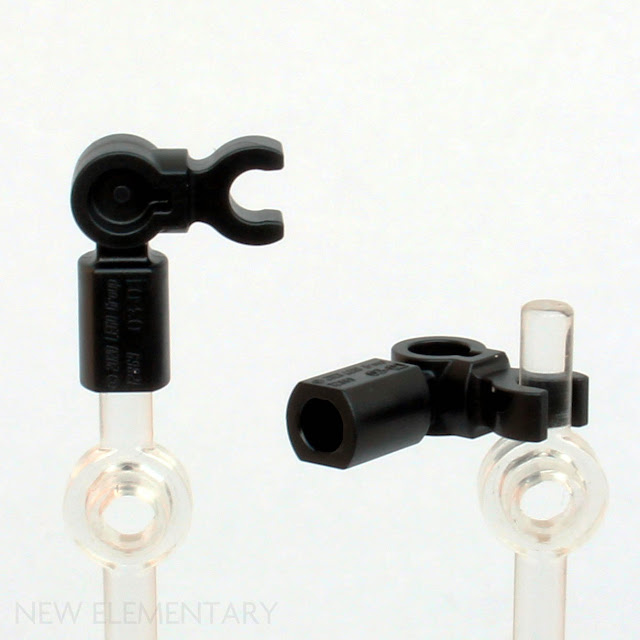 80018 Monkie Kid’s Cloud Bike is surprisingly well-stocked with recoloured pieces, whereas the larger 80019 Red Son’s Inferno Jet not only lacks new moulds but has a grand total of three recoloured pieces.

In 80018 we have the following, alongside some recoloured minifig pieces that we’ll cover below: 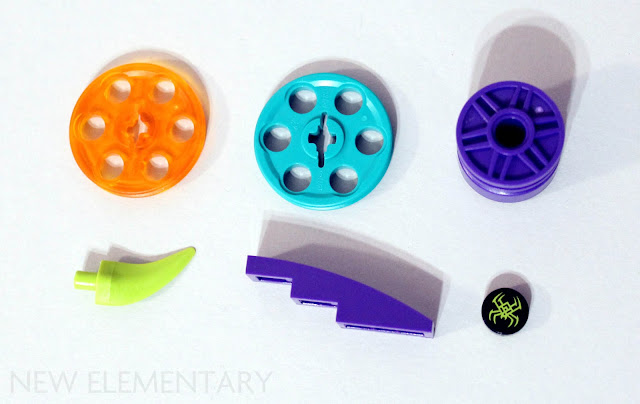 While 80019 has fewer recolours, two of them are particularly exciting for me since I love the colour in question, but your mileage may vary: 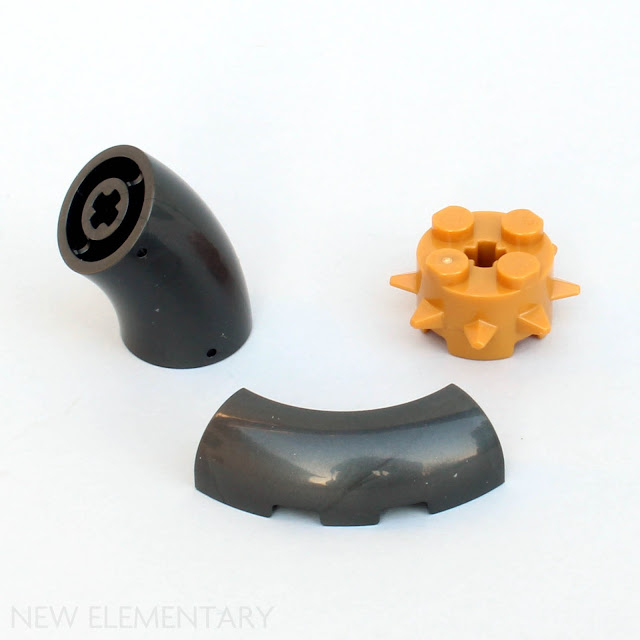 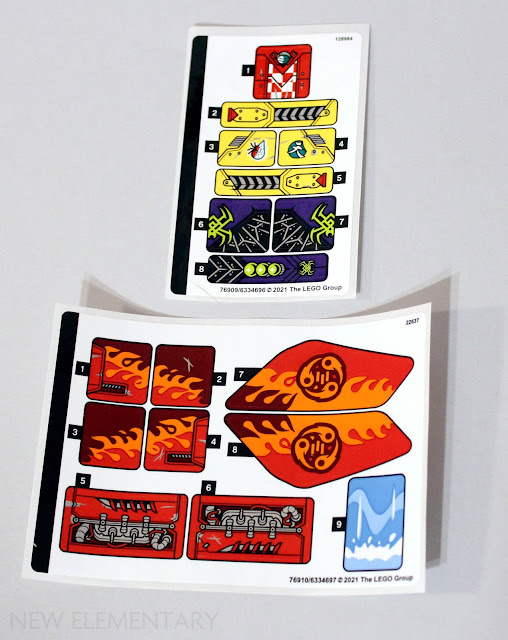 The sets each come with a sticker sheet. I chose not to apply these.

80019 has some additional rare pieces to make up for it though, while 80018 only has one notable piece, other than the new ones. 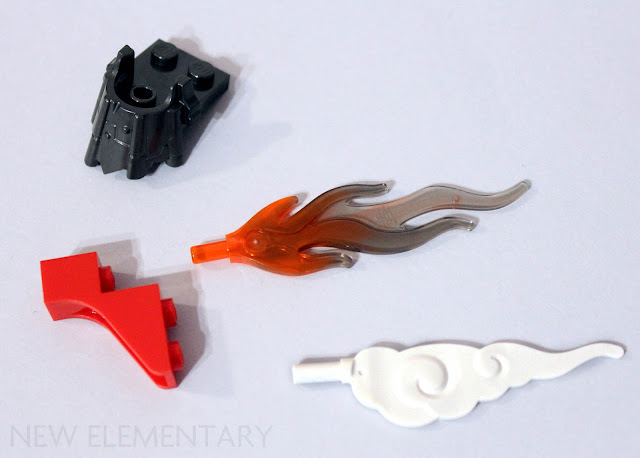 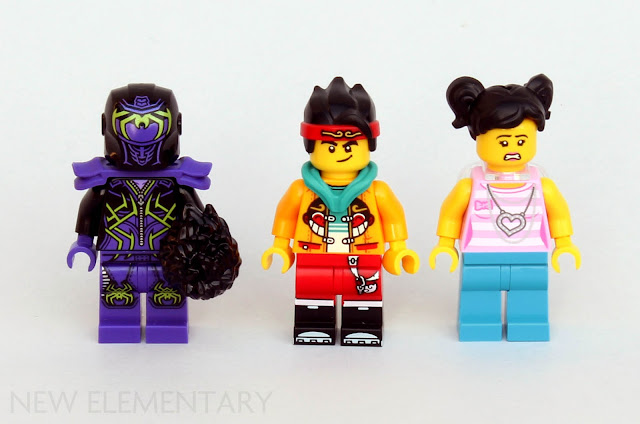 Monkie Kid’s Cloud Bike features our hero in his new season 2 outfit, complete with the minifig hoodie piece in dark turquoise (6337294), as well as one of the new spider villains who comes with a minifig pauldron piece appearing in dark purple (6338441) for the first time. 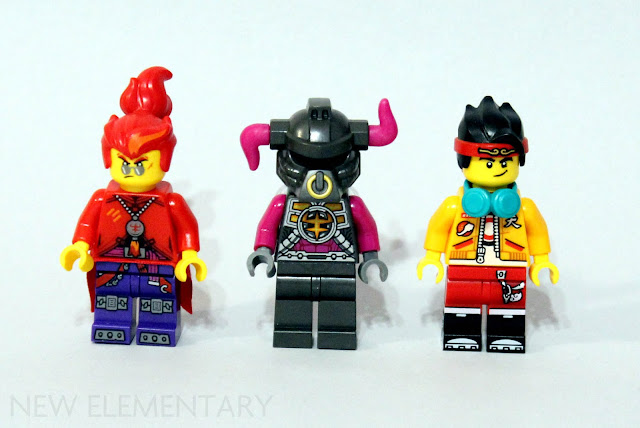 Red Son’s Inferno Jet, on the other hand, features the old-style Monkie Kid with the teal headphones, Red Son and Bob, our favorite henchman with a crooked horn. None of these figures feature any new parts.

While sporting more new parts, 80018 is definitely less interesting in the build department. We get one of the spider drones utilising the new bar holder piece as legs - if you’re getting multiple sets from this wave, get used to building a lot of these buggers - and two bikes. 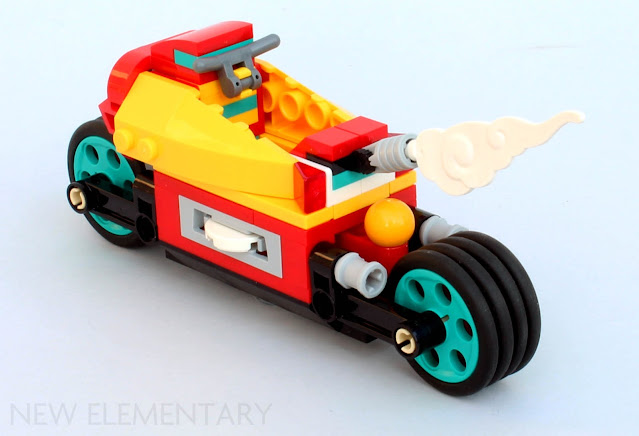 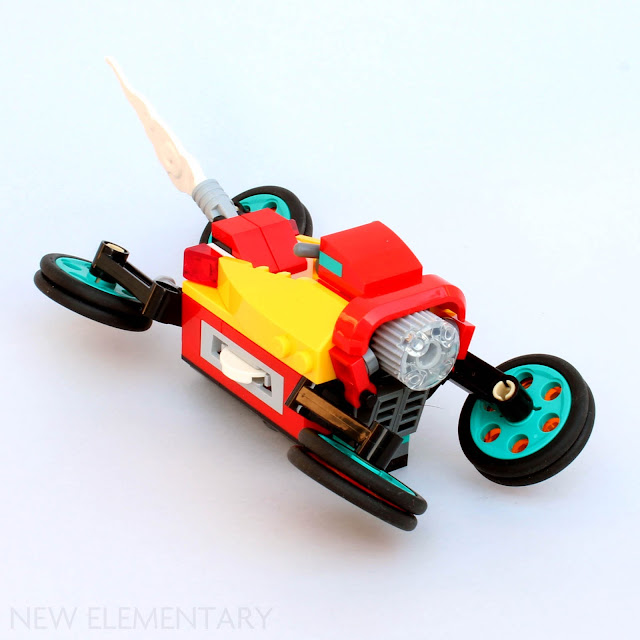 Monkie Kid’s titular vehicle can (slightly) transform into a flying machine by rotating the wheel assemblies outward. The bike features two disc launchers aimed sideways which can be triggered by a simple Technic liftarm mechanism.

While definitely the simpler build of the two, I much prefer the look of the villain’s bike. The combination of the disc launchers and flying gimmick make Monkie Kid’s ride really bulky, whereas this ride definitely looks slick and mean.

There really isn’t much to discuss here, as neither build breaks any new ground. I felt like this is an unreleased Ninjago concept nicked from the idea bin and rebranded a bit with Monkie Kid colours.

Meanwhile, Red Son’s Inferno Jet makes up for its few (albeit cool) new pieces by being a surprising build. 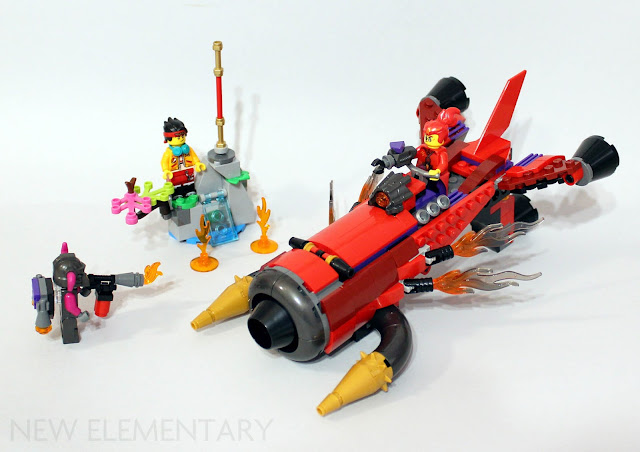 Red Son being a low-key Bionicle fan is definitely my favourite bit of deep-lore from this theme, as he clearly based his custom flying vehicle on 8943 Axalara T9. To be honest, I didn’t expect much from this set based on the box art, but am happy to report I have been proven wrong! 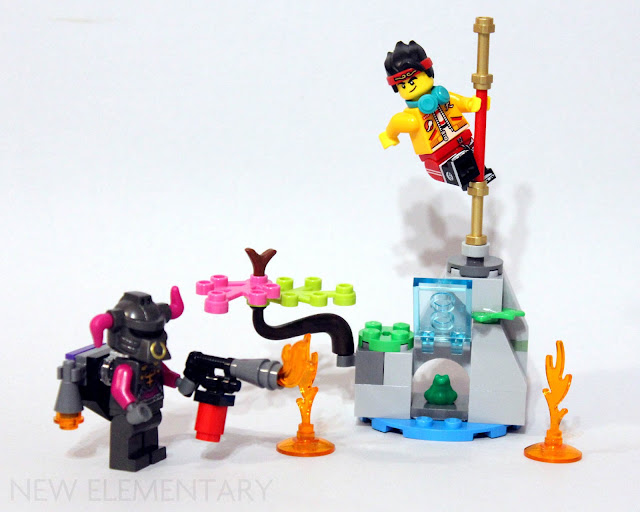 The little side build is cute, I think depicting Monkie Kid first acquiring his iconic stave weapon. Meanwhile Bob is trying to thwart him with a flamethrower, and a poor little frog is hiding behind a waterfall to escape the fire. 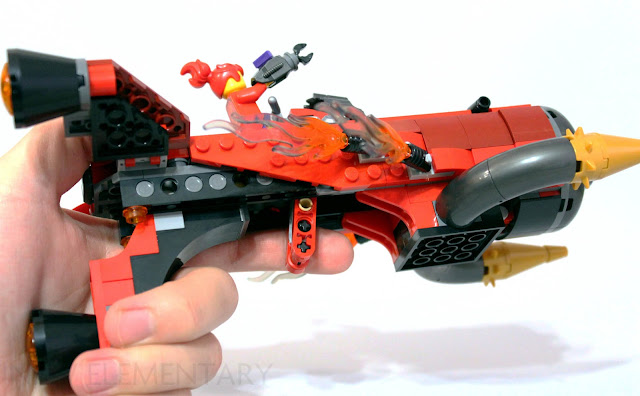 While the main jet build doesn’t really showcase any new building techniques, I am definitely impressed by the play features. The bottom engine section is designed as a grip - intended for hands smaller than mine, granted - with a trigger built into the fuselage used to fire a pair of spring-loaded missiles from the circular opening up front. This whole section is connected with one clip at the top and two at the bottom with the intention of folding it down for a reload. 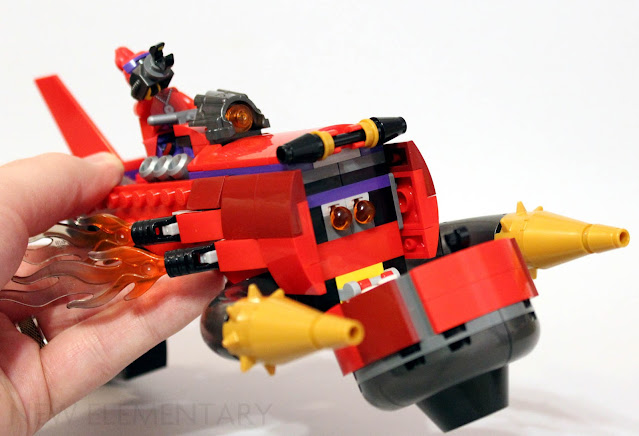 Un-clipping, reloading the missiles and clicking the section back in and of itself feels like a bit of a play feature, being more involved than just pushing the little darts back into the launchers. The LEGO Group has always claimed to distance itself from realistic depictions of firearms (something a few minifig weapons clearly violate) but this “reloading action” complete with clicking sounds definitely plays to that. This is essentially a brick built Nerf gun!

These sets leave me in the curious situation of recommending both with just about the same levels of enthusiasm, but for different reasons. 80018 Monkie Kid’s Cloud Bike doesn’t distinguish itself as a build, but can be fun enough for younger fans with its roughly equally-matched opponents and launchers. The main attraction, however, is the relatively large selection of new pieces in the cheapest set of this wave; also the cheapest way to get some of those new bar holders in a set.

On the other hand, 80019 doesn’t quite have that quantity of new parts but the recolours are for me among the most exciting this wave has produced, and the build was a pleasant surprise. Red Son’s Inferno Jet nails the play feature aspect extraordinarily, more so than just about any set I’ve built recently. Either of these sets - or both! - are a solid choice, depending on what you’re looking for.