Caz Mockett (aka BlockHeadUK) returns today to review LEGO® CITY 60304 Road Plates, which premieres the replacement for printed 32x32 baseplates that have graced city sets for over 40 years. Coming in 2021, it is priced £17.99 / $19.99 / 19.99€. Buying this set? Consider using our affiliate links: UK LEGO Shop | USA LEGO Shop | Australia LEGO Shop, for other countries 'Change Region'. New Elementary may get a commission. The products in this article were provided free by LEGO; the author's opinions are not biased by this.

After months of rumour and speculation, the new LEGO® CITY Road Plate system has been finally unveiled. This review will examine the new elements in set 60304 and how they can be integrated with an existing City layout, either using regular baseplates or a modular system such as MILS. 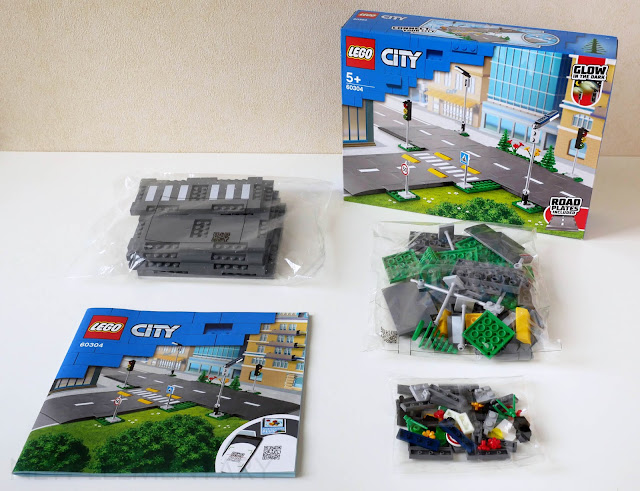 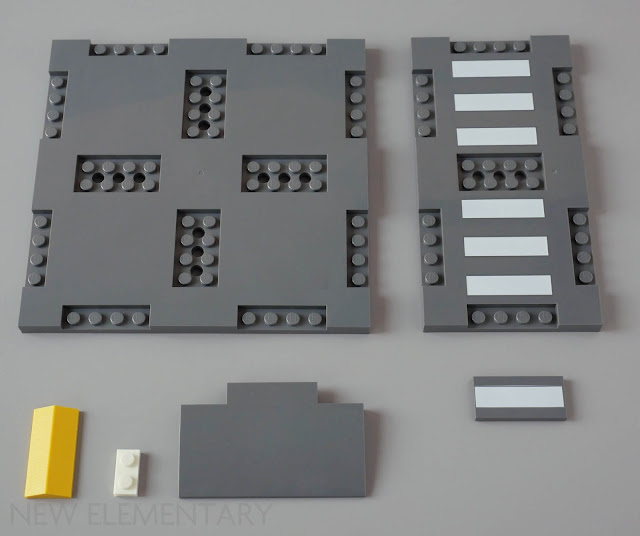 We do not know the names for some of these new elements yet, so I have used something descriptive to refer to them here:

Looking more closely at the large road plates, they are the equivalent of 2 plates thick, with a shiny surface much like a regular 2x4 tile rather than the slightly rough matt surface of existing 6x6 tiles. Each of the 2x4 cutouts in the middle of the plates can accommodate a 2x4 plate or tile. There are holes between the studs in these cutouts, so that anything you attach to the fully-enclosed areas can be removed easily by pushing them from the underside. The instructions for each set even suggest which element provided in the set is suitable for poking them out (remember these are aimed at the 5+ age group).

Talking of the undersides, they are quite interesting in their own right. 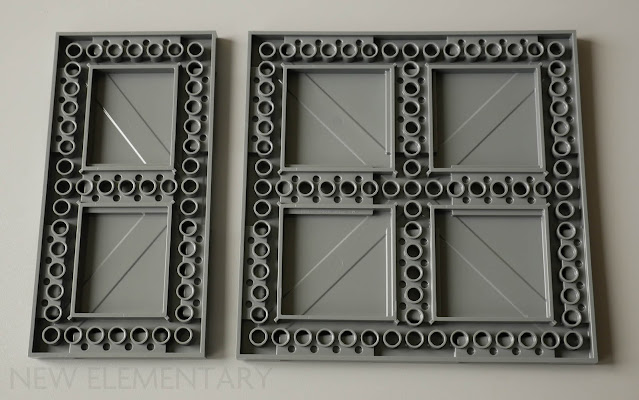 The great textures and patterns found here inspired me to create something of my own which made use of them, shown later in the article. 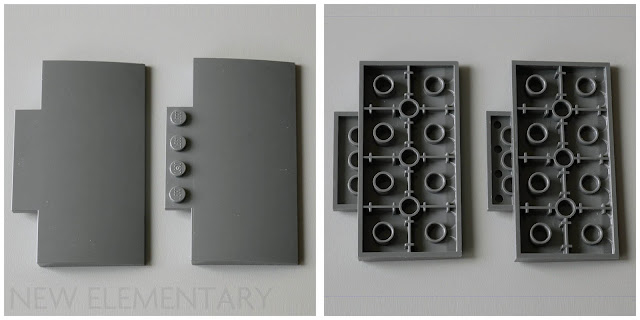 On the left is the new slope piece, used as ramps at the end of each road plate. Closer inspection shows that it is pretty much identical to the familiar part seen on the right - Slope Curved 5 x 8 x ⅔ (15625) - but without the four studs on the tab at the highest point of the slope. The undersides are identical.

This set is aimed at the 5+ age bracket, so as expected, the steps involved to put together the road system are quite straightforward. The instructions suggest three different layouts for the four large plates and one smaller crosswalk - and of course you can also add the ancillary trees, road signs and street lights in whichever combination you wish. 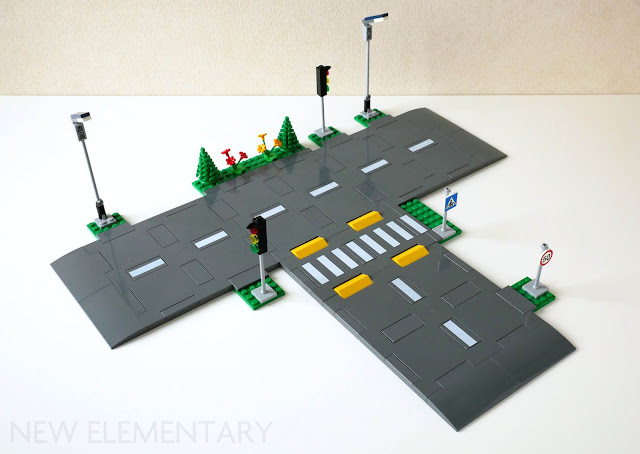 Ideas for customising the Road Plates

The inclusion of the printed tiles for lane markings will give you a consistent look and feel to your layouts. Below are some suggestions for customising the plates to give your city a bit more character. 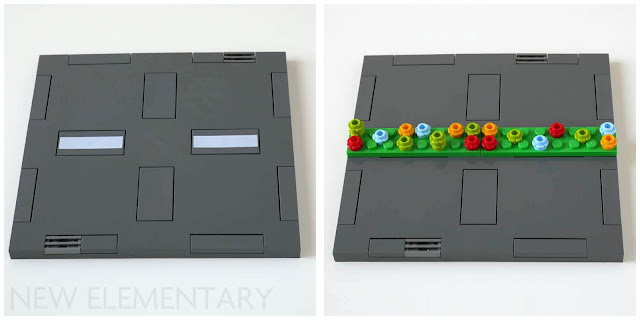 You could start by adding a 1x2 grille tile to one of the side cutouts to simulate a road-level drain. If your road is intended to be in a quiet suburban area rather than a busy high street, you could add a strip of 2x plates with some flowers as the central reservation/median strip - here I added two 2x4 plates in dark grey to where the road marking tiles would normally sit, and then connected four 2x4 plates in bright green on top. These 7-wide lanes will be fine for the smaller range of LEGO vehicles but if your city has more real estate, and uses 8-wide vehicles, you could add a road plate to each side of the centre divide to give a wider boulevard feel: 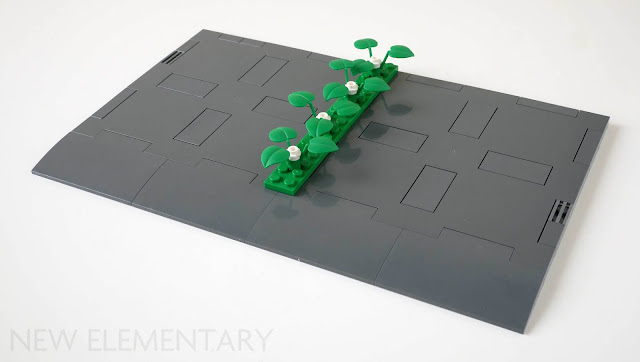 If you would like to branch out into a dual carriageway for your city, here are a few more ideas to separate the two directions of traffic flow. 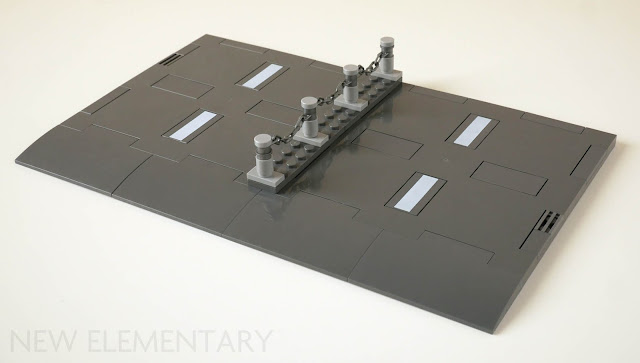 And if you have a lot of room for your layout, they even provide the option for a full 6-lane highway.

Integrating the new road plates with your existing Modular Buildings 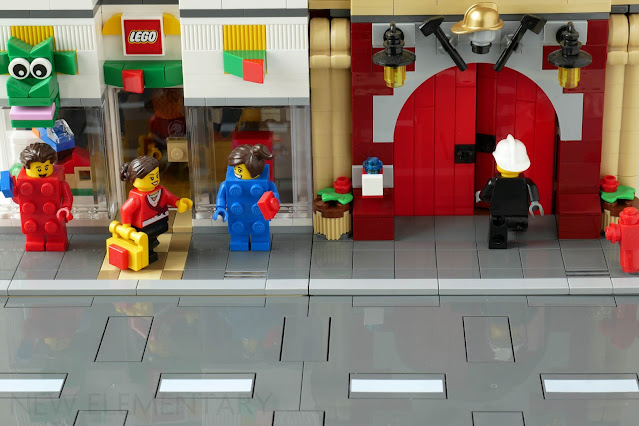 I know that many AFOLs have been concerned that the arrival of these road plates might mean that they are no longer compatible with their existing Modular buildings, which are built on the thinner baseplates. Given that these modulars currently have their pavements/sidewalks sitting 1 tile above the flat surface of the existing road plates, let’s see how we can achieve this with the new 2-plate-thick road plates, with minimal disruption. 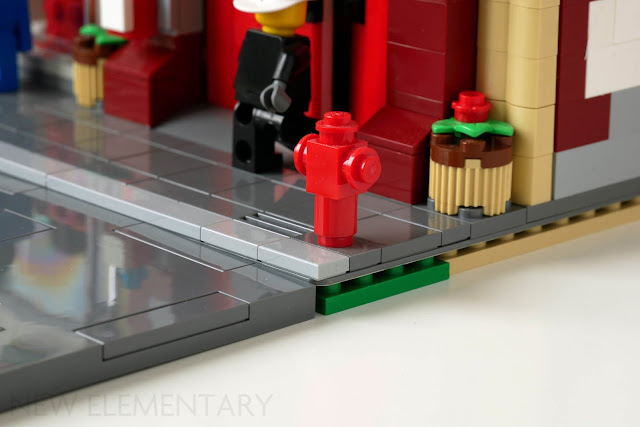 It’s actually very easy indeed - place the new road plates directly onto the table, and then add 1 layer of plate underneath your modular, which is still sitting on its baseplate. This works out because the height of a baseplate sitting directly on top of bare studs is exactly the same as the thickness of a plate without counting its studs. 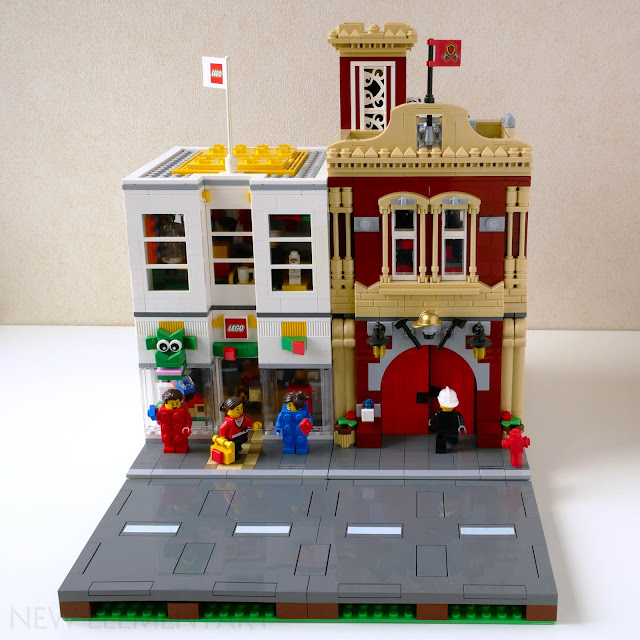 If you are already using a MILS-like system for your layout (usually consisting of a foundation of baseplate + brick + plate sandwich) then there is good news for you too. 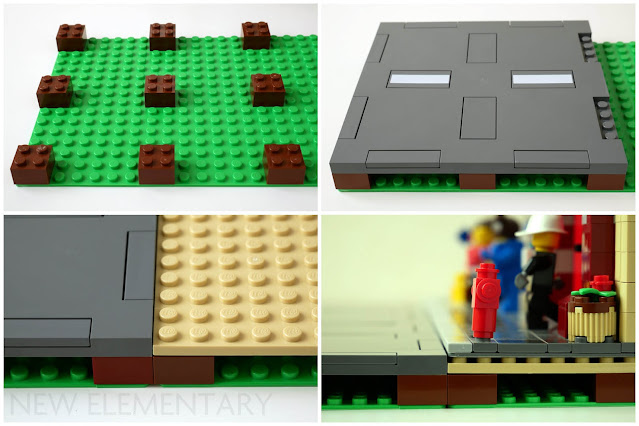 In fact, using the new road plates may actually save you many parts - since you will need far fewer bricks for the middle of the sandwich, and can then place the new road plate directly on top to form the road surface, without the need for the top plate layer of the sandwich. For the areas where you want to locate your Modular buildings, add the usual plate layer on top of the bricks and then place the modular directly on top of these bare studs.

As I mentioned earlier in the article, I was inspired by the shapes and textures of the road plates’ undersides, which reminded me of industrial architecture. 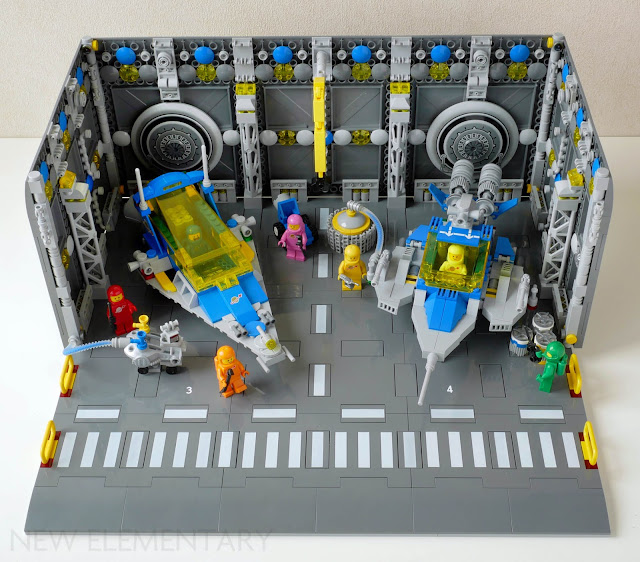 I’ve had these two spaceship MOCs in Classic Space colours built for some time, and I have wanted to make some sort of hangar for them for a while, but I was shying away from starting due to the number of bricks it was going to require, and the overall weight it would end up being.

Taking the road plates and ramps from all five of the City sets I was sent to review, plus plenty of parts from my own collection, I was able to produce Hangar Bays 3 & 4, the perfect place for my Rainbow Space Crew to hang out, do some maintenance on the ships and prepare them for their next mission. Benny seems delighted (as usual). 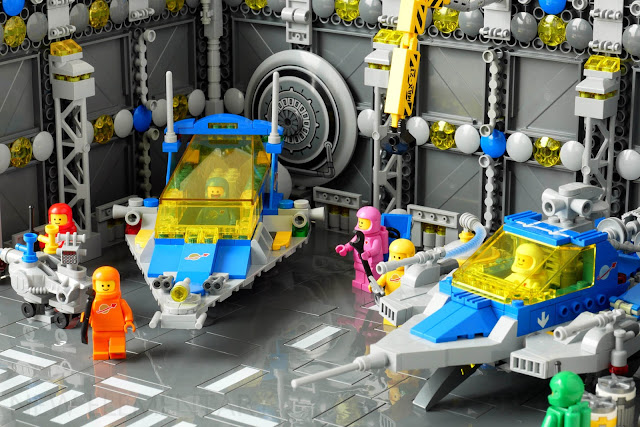 I was particularly pleased with how well the undersides of the road plates worked for the walls of the construction. Greebling onto anti-studs does not leave you with as many element options as studs, but I’m happy with the level of detail I was able to achieve. I’m sure these parts will be popular with other space fans who will find even more ingenious ways to use them for interstellar infrastructure, as well as their more conventional use case as roads.

This set will retail for £17.99 / $19.99 / 19.99€ which I feel is a reasonable value for money, given that you are getting 5 large elements in the box. I think they will be a good idea for City enthusiasts who have limited space, as they will only take up 16 studs of real estate to establish a road, without wasting a further 12 studs on sidewalks which are unavoidably present with the older road plate system. But they are also flexible enough to give the option of much wider multi-lane highways, and being able to add custom lane dividers will mean more unique options for the look of your city. The lack of a curved corner element is a valid criticism at present, but perhaps a printed part to fill this gap will be produced in the future (purely speculation at this point).

It is going to be a big investment to switch over a whole city layout to the new system, but in doing so, you can claw back some valuable table space for buildings and other features, while the new system is still compatible with the Modular buildings and MILS plates widely owned and used by AFOLs. They also offer MOCing potential for ideas which are not their intended purpose. For the KFOL market, I believe these new road plates will provide a more stable and flexible play experience and are far less likely to get bent or snapped when they are cleared into the toybox in a hurry.


All text and images are © New Elementary unless otherwise attributed.
Posted by: Admin Posted on 12/15/2020 02:00:00 pm
Email ThisBlogThis!Share to TwitterShare to FacebookShare to Pinterest
Labels: City, MOC, Set review