Andrew Barnick returns today with another LEGO® DOTS review, and it is quite a different one: 41914 Creative Picture Frames. Buying this set? Consider using our affiliate links: USA LEGO Shop at Home|USA Amazon|UK LEGO Shop at Home|UK Amazon. New Elementary may get a commission. The products in this article were provided for free by LEGO; the author's opinions are not biased by this.

LEGO® DOTS is best known for the colourful tiles and customisable bracelets, but that’s not all the theme has to offer. Today I’ll be reviewing 41914 Creative Picture Frames, one of the various “desk accessory” sets. This set comes in a larger sorting box than the Mega Pack or the desk accessories from the first half of the year, with a larger part count to match. As such, there’s a lot to look at, so let’s get started! 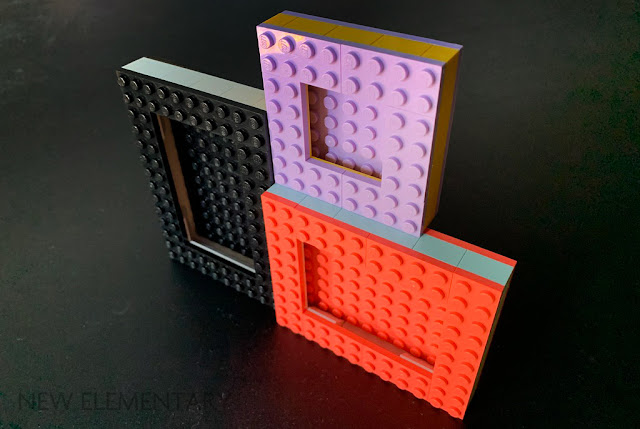 Bricks and Plates and Tiles, Oh My!

Unlike the bracelets or Extra Dots packs, this set offers a fair share of parts that are bigger than 1x1 tiles. 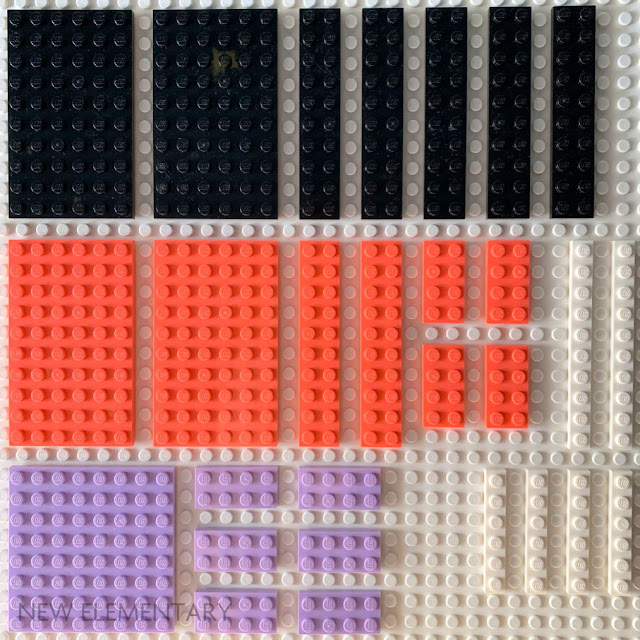 The backs and decorative surfaces of each picture frame in this set are formed from larger plates in three colours: Black, Vibrant Coral/ Coral and Lavender. The 6x10 and 2x10 plates used for the front and back of the largest black frame are neither new nor rare (nor are the white 1x6 and 1x10 plates used to lock them together), but the same can’t be said for the other two frames. 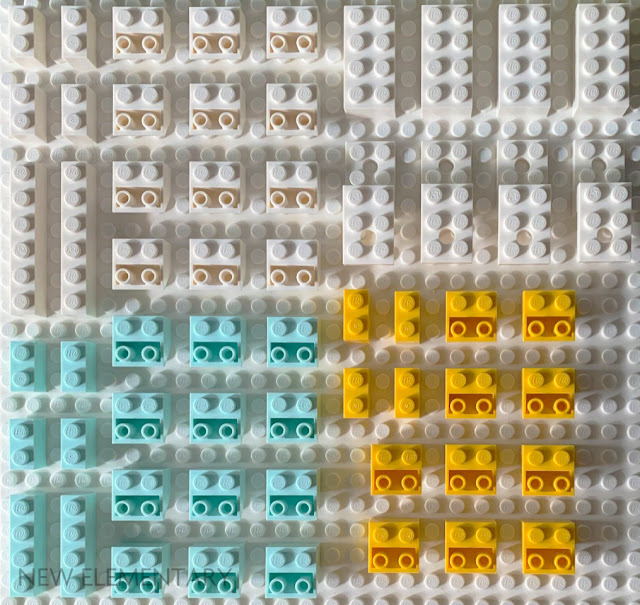 Between the front and back surfaces of the frames a combination of standard bricks and inverted slopes are used to add depth to the frame and hold photos in place. The large black frame uses common White 1x2 and 1x6 bricks and 2x2 inverted slopes, and the small lavender frame uses similarly common Bright Yellow/ Yellow 1x2 bricks and 2x2 inverted slopes. The mid-sized coral frame, on the other hand, uses Aqua/ Light Aqua, a far less common colour. The four 1x2 bricks used for the corners of the frame are not terribly rare, but the edges use a combination of two 1x4 bricks (6218162 | 3010), only available in three other 2020 sets, and a whopping twelve 2x2 inverted slopes (6300588 | 3660), which only appear in two other 2020 sets. Also pictured above are four common white 2x4 bricks and four equally common white 2x5x1⅓ brackets, which are not used for the structure of the frames themselves but rather to support standing the frames vertically and connecting them together for display.

Of course, it would not be a Dots set without the decorative 1x1 “dots” themselves. The various desk accessory sets released this year eschew the printed tiles of the smaller bracelet and Extra Dots sets in favour of a large quantity of unprinted tiles in various shapes and colours. 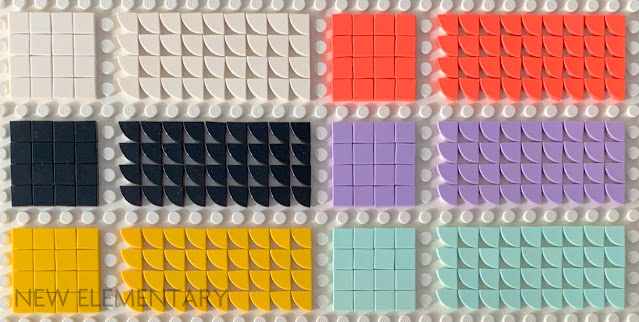 In this set the featured tiles are 16 1x1 square tiles and 36 1x1 quarter circle tiles in each of the same colours used for the frames themselves: white, black, yellow, coral, lavender and light aqua. The white, black and yellow versions of these tiles are all reasonably common across many other sets, though the quantities of each in this set are still quite decent for its size. The other three colours are comparatively rarer.

All in all, while none of the tiles are exclusive to this individual set, the quantity of each and the rarity of many of them make this set a good option for those looking to stock up on tiles whether they’re a Dots enthusiast or just a MOCist with an eye for detail. 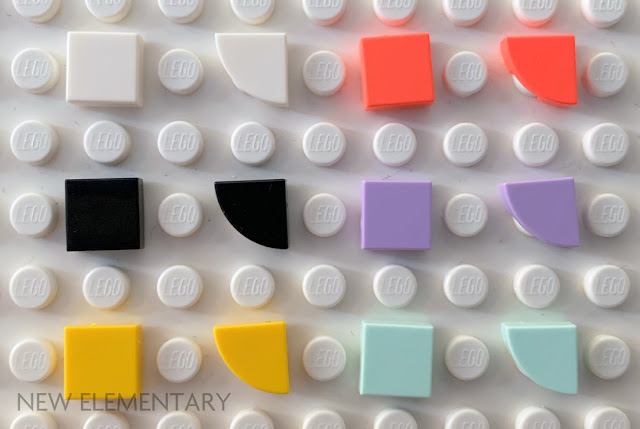 Like other Dots sets, one of each 1x1 element in the set comes as an extra.

All Dots sets are light on instructions, even ones like this that do require building before you can start decorating. Instructions for all three frames are included on one side of a single folded page, with the reverse side dedicated to non-prescriptive ideas for how to decorate and arrange the completed frames.

Completed, all three frames are fairly small. No specific measurements are prescribed for the frames, but the largest of the three frames can loosely fit a 2½” x 3½”/6.4 x 8.9 cm “wallet-sized” photo, while the other two seem designed for even smaller sizes: 2½” x 3”/ 6.4 x 7.6 cm and 1½” x 1½”/ 3.8 x 3.8 cm (perhaps slightly larger for each if you want a snug edge-to-edge fit, though I think the use of inverse slopes to hold the photos in place might be intended to allow that sort of wiggle room especially for young builders). 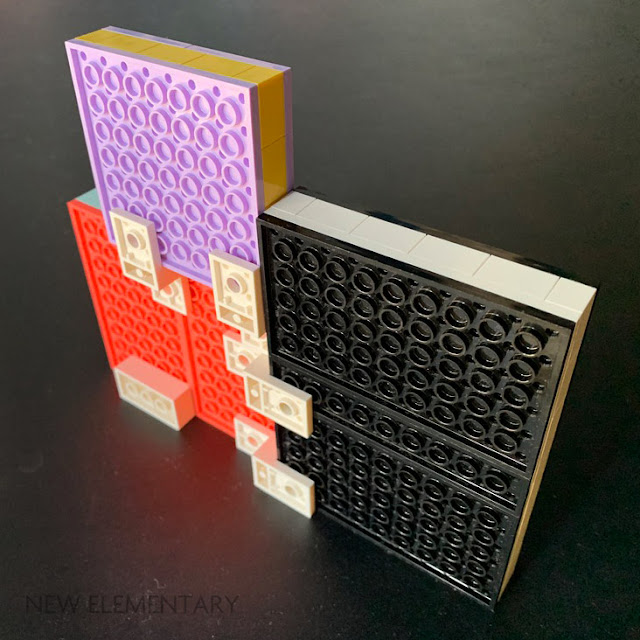 Linked together with bricks and brackets, they form a slightly larger display that’s well-sized for a desk or shelf.

Dotting Inside the Lines

As with my other reviews, I’ve tried to come up with unique patterns to demonstrate some of what you can do with the variety of parts contained in this set alone. 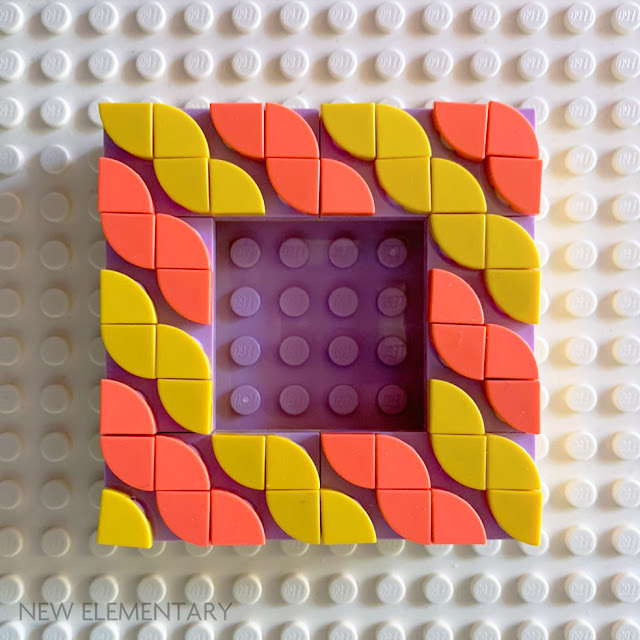 For the small lavender and yellow frame, I opted for a rather basic three-colour pattern. Yellow and coral tiles provided a nice contrast to the lavender base, creating a pattern of bold, wavy stripes with subtler and thinner lavender “pinstriping” in between. 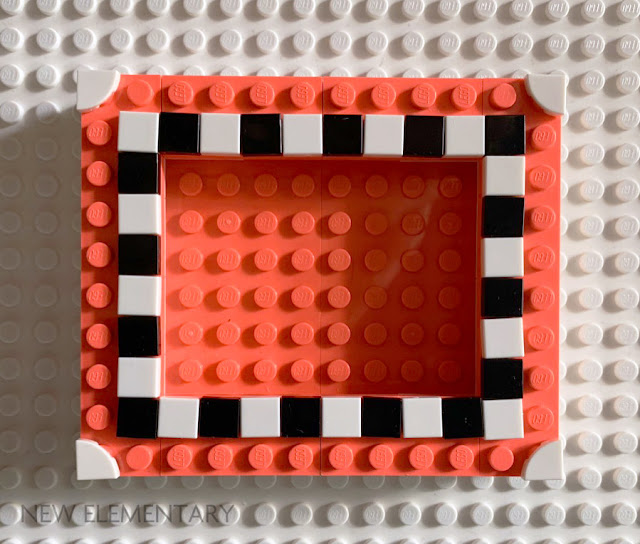 For the mid-sized light aqua and coral frame, I wanted to pick a pattern and colours that wouldn’t be overwhelmed by the vibrant background. The colours reminded me of a retro diner aesthetic so I extended that with a thin black and white “checkerboard” border around the photo. White quarter circle tiles on the corners helped to break up the remaining coral border a little more. 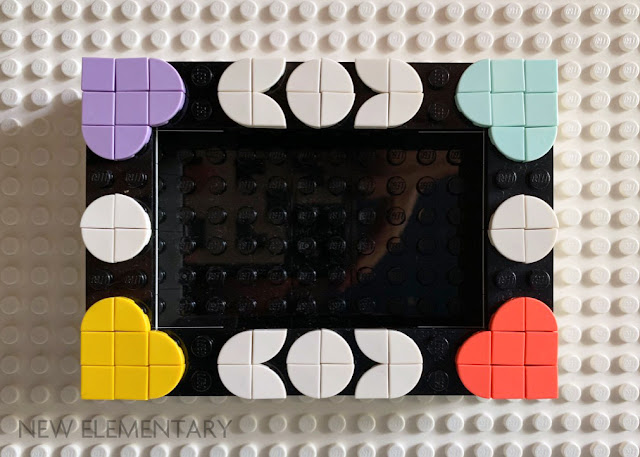 On the largest black and white frame, I wanted to take advantage of the stark black background by using as many colours as possible! With four colours to choose from, I decided a solid 3x3 heart pattern in each of the corners would be cute, -and this was a technique I hadn’t gotten to use on the bracelets from the earlier reviews due to them never being more than two studs wide at any point. The ornamentation in the corners reminded me of what you might see on a more traditional frame, so I used the remaining white quarter circle tiles to create circles and floral patterns to break up the space between each heart. This one ended up being my favourite!

The Dots theme is fairly varied, despite its focus on the same stable of 1x1 parts across all sets. A lot of people might be content to limit themselves to the bracelets or Extra Dots packs for their greater emphasis on the tiles themselves, as well as their unique printed parts but a set like this not only serves a practical function, it also offers a quite extensive part selection of its own. This includes not only tiles in bulk quantities but also a few unique or rare building elements that form the “base” for that creative tile usage. I would recommend a set like this to anyone really passionate about the Dots theme or mosaic decorating in general.


All text and images are © New Elementary unless otherwise attributed.
Admin: Tim Johnson Posted on 12/10/2020 09:42:00 am
Email ThisBlogThis!Share to TwitterShare to FacebookShare to Pinterest
Labels: Dots, Set review