Caz Mockett returns today with more 2021 LEGO® CITY reviews for you: 60290 Skate Park and 60291 Family Home. Buying this set? Consider using our affiliate links: UK LEGO Shop | USA LEGO Shop | Australia LEGO Shop, for other countries 'Change Region'. New Elementary may get a commission. The products in this article were provided for free by LEGO; the author's opinions are not biased by this. 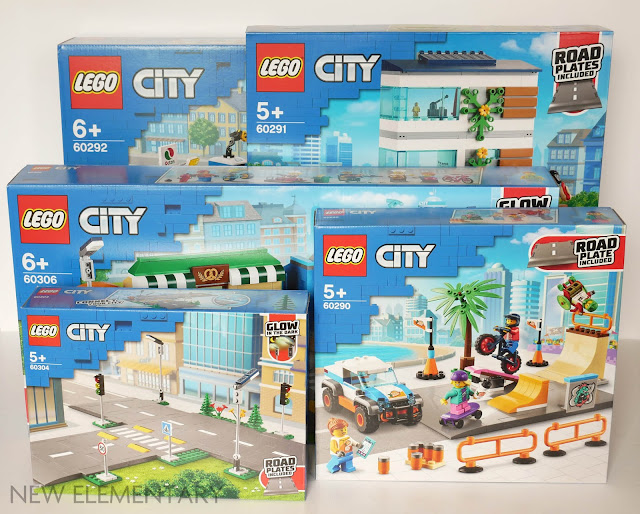 Of course, the first thing I did was build all five sets and put them together into a City layout to see what could be made from them. 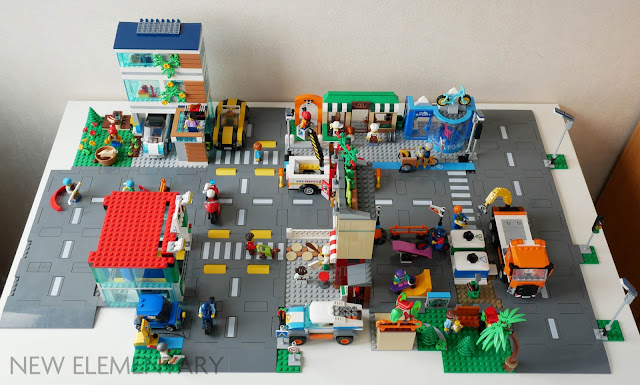 This is only one of thousands of combinations, no doubt. I think they fit together very nicely and the road plates were easy to lay down and fix to each other. They covered an area of approximately 1.5m x 1.0m (60” x 40”); quickly covering most of my tabletop with roads or buildings.

I have already covered the new Road Plate system in great depth in my review of 60304 Road Plates, so I will only mention these elements briefly here, but they do also appear in these other sets. 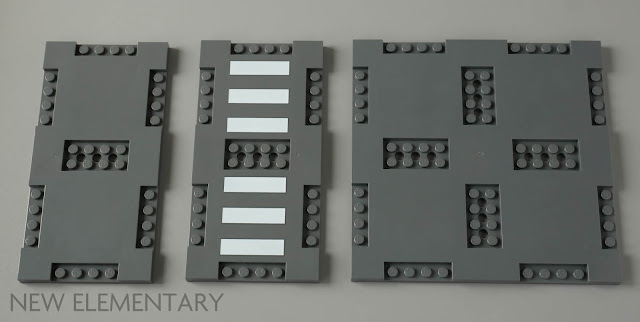 The elements are all new for 2021 apart from the yellow double slopes, which have not been seen since 1997.

Let’s take a closer look at each of the sets in the series, starting with two of them today.

The Skate Park comes with one of the large road plate elements, three end ramps and two 2x4 tiles printed with the white line from the common element selection. We are also treated to a unique print and other rare recolours of existing parts. 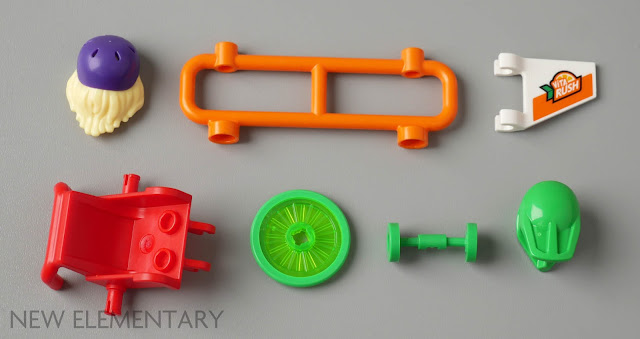 Unique recolours and prints in this set are: 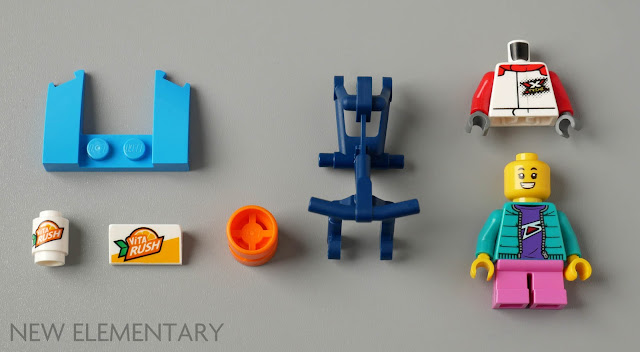 The set includes a number of uncommon elements:

The rare minifigure components included are as follows: 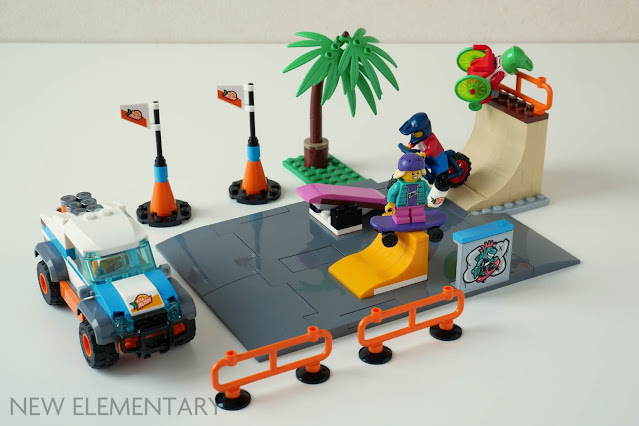 The first instruction manual gives details of how to build the truck and the rest of the builds are in the second. Four minifigures are included - a Vita Rush lady driving the truck, a girl riding a skateboard, a boy on a mountain bike and a man in his funky-coloured wheelchair.

The cones and barriers can be used to add more obstacles for the minifigures to negotiate, while there are two sizes of ramp and a small section of graffiti wall to balance along the top of. 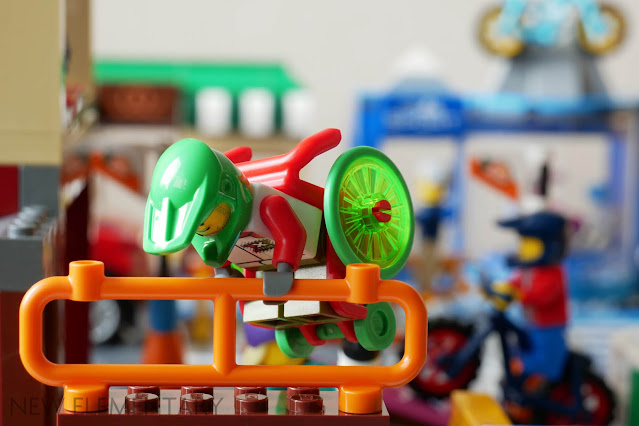 It’s great to see LEGO being more representative with their minifigures, and the daredevil wheelchair user is definitely a highlight of the set here. It is aimed at the 5+ age bracket and I feel the pricing is about right here - £24.99 / $29.99 / 29.99€ for 195 parts. 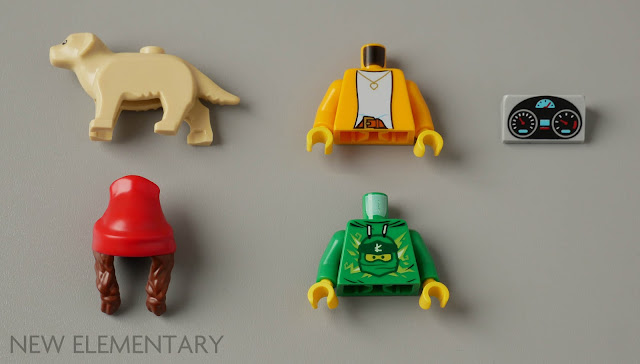 We are treated to a single new mould in this set with 1 x Animal, Dog, with Eyes and Nose Print in Tan (6329603 | 69962), a colour unique to this set. There is also 1 x Minifig Hat with Hair, Two Braids and Beanie, Red Pattern in Bright Red/ Red (6336203 | 52686) which is a new colour combination for this mould, exclusive to this set. Introduced in the Hidden Side theme, it was previously only available as Medium Lavender with Bright Light Yellow or Sand Blue with Orange.

There are three lovely printed elements included which are worth mentioning:

I really like the new gauge print, the bright light orange torso provides a stylish addition to any minifigure’s wardrobe and fans of Lloyd will be delighted that they can now obtain this cool Ninja-print hoodie in a more accessible set. I’m sure canine collectors will also be delighted by the new Retriever mould. 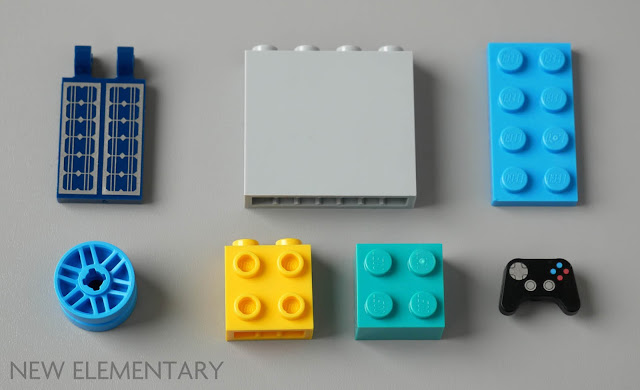 There are also a handful of rare elements which are worth noting: 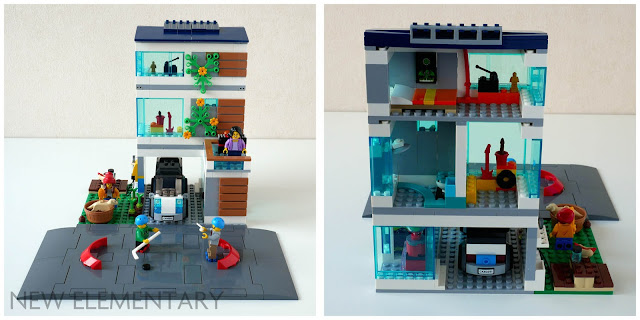 Costing £44.99 / $49.99 / 49.99€ with 388 pieces, the Family House has three floors, a substantial roadway at the front where the family can play street hockey, a modest garden to one side and a balcony at the front. Once again this is a 5+ set, which means some of the parts are quite large but the house itself goes together quickly. The first small instruction booklet covers the family car while the much more substantial booklet  shows the remainder of the build. The finished house has some interesting external details, fun accessories and various items of furniture inside, with an open back at the rear for ease of access. 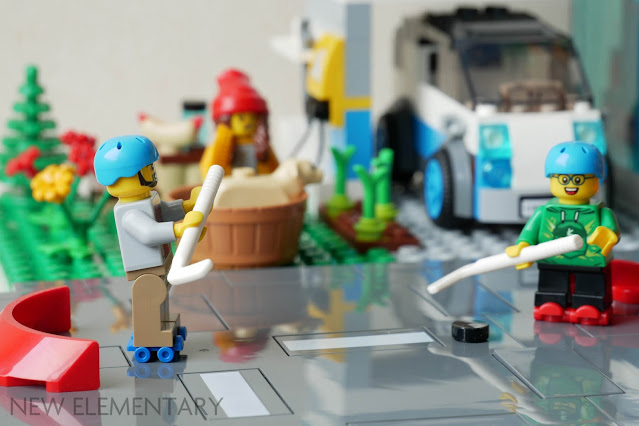 The family of four minifigures is completed by a dog. I can see there will be plenty of play scenarios for the characters with all of the accessories which are included. Dad and the small boy also have their own hair pieces available for when they are not playing street hockey, which is a nice touch.

I feel that the price tag is perhaps a bit high for the piece count, especially when compared to other sets at the same price point, but this is often the case for sets aimed at a younger audience which tend to have fewer small parts included. Buying your City sets from LEGO.com? Consider using our affiliate links: UK LEGO Shop | USA LEGO Shop | Australia LEGO Shop, for other countries 'Change Region'. New Elementary may get a commission..


All text and images are © New Elementary unless otherwise attributed.
Posted by: Admin Posted on 12/22/2020 09:44:00 am
Email ThisBlogThis!Share to TwitterShare to FacebookShare to Pinterest
Labels: City, Set review