Tim Goddard (@tim_goddard928) returns with more LEGO® Super Mario reviews today by looking at the two Power-Up Packs for the Mario figure – which unfortunately he does not own! The products in this and our other 2021 LEGO Super Mario articles were provided free by LEGO (the author's opinions are not biased by this) and we weren't aware at time of acceptance that the range does not include the figure. Buying Mario sets? Consider using our affiliate links: UK LEGO Shop | UK Amazon | USA LEGO Shop | USA Amazon | Australia LEGO Shop, for other countries 'Change Region'. New Elementary may get a commission. 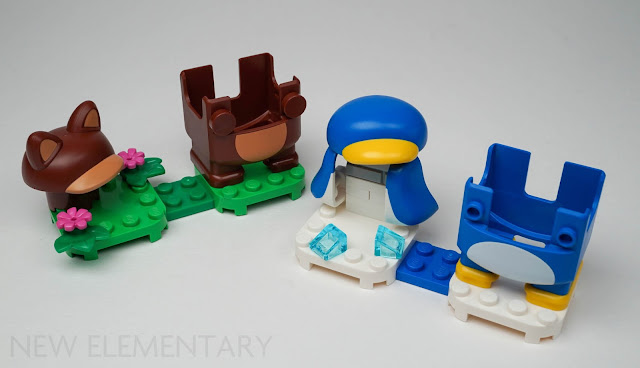 In this, the second wave of Super Mario sets, we get two new Power-Ups to upgrade our hero: 71384 Penguin Mario & 71385 Tanooki Mario, priced £8.99/ US$9.99/ 9.74€. There are new moulds and some recoloured hats and overalls to provide him with his new outfits. Mario’s body is not supplied with these two sets, which the packaging makes very clear, and is indeed at pains to point out that the starter course set 71360 Adventures with Mario with its barcodes is needed. I do not have that set and therefore no Mario to dress up, but no matter, I have a plan!

Let us look at these new packs in turn. There are instructions included in the form of a leaflet but, as with the character packs, there are no Element or Design IDs included there and so information in that regard is sparse in this review. We have already explored the dimensions of the hats, overalls and bases that debuted in the first wave of Super Mario sets in the summer of 2020. 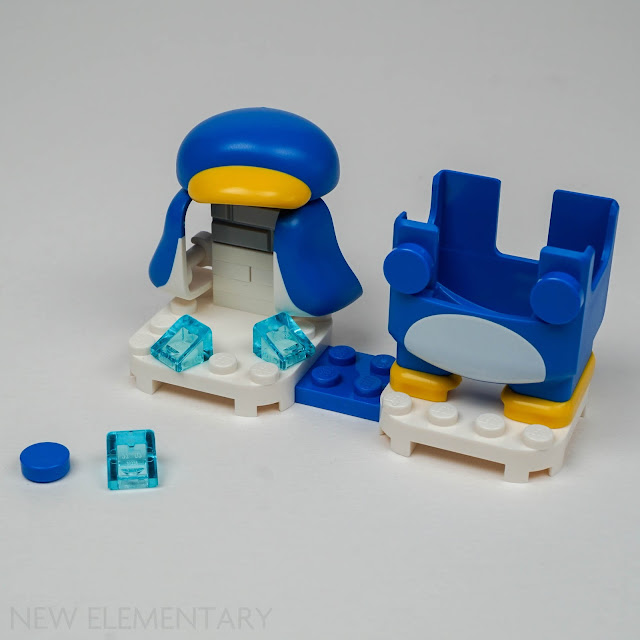 Penguin Mario gives our eponymous plumber the ability to belly slide; a Power-Up that’s great for an icy speed boost and for quickly ploughing through enemies.

You get two linked 4x4 rounded corner bases (66792) and a sprinkling of other parts that are really only there to give you somewhere to store Mario’s new outfit until it’s needed. 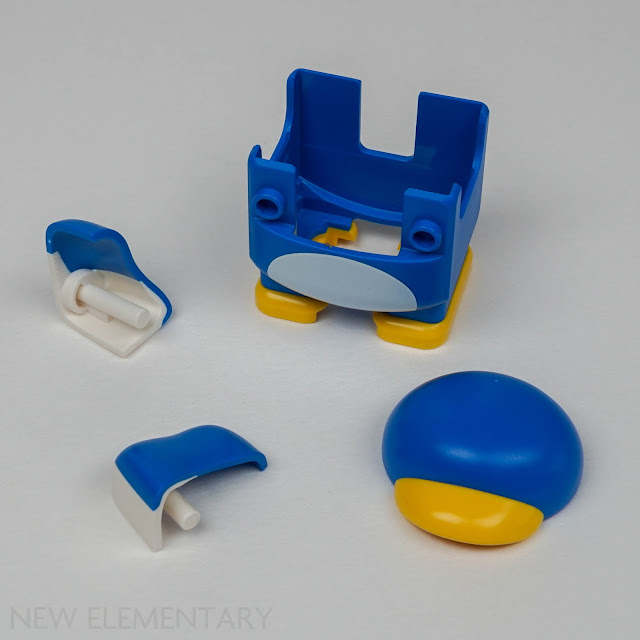 A new design of cap (73733) is included which is dual-moulded; the brim serves as the penguin beak. As with all of Mario’s hats produced for this theme these can be used for custom built figures and are in a scale that could work with Brickheadz.

Two new dual-moulded wing parts clip on to Mario’s hands via 3.18mm bars to give him wings for swimming (left 77090, right 77095). These seem unlikely to ever be seen in another set but could be used to give a microscale spaceship some organic-looking wings. 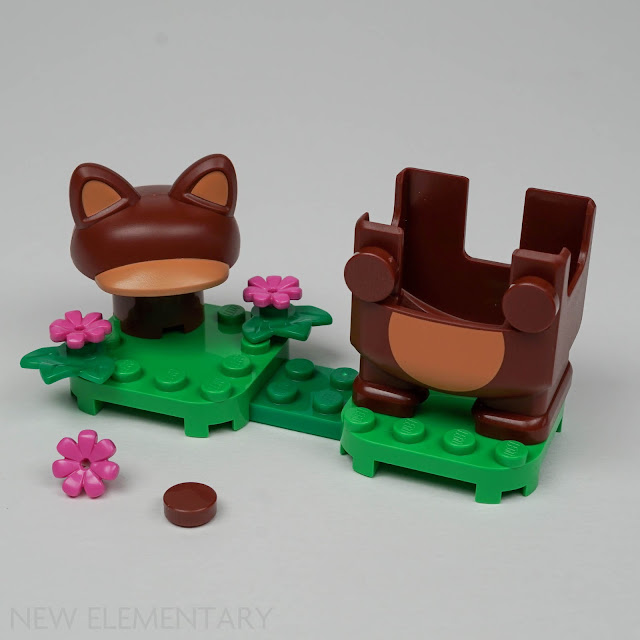 Tanooki Mario should be all about the tail but disappointingly this is only printed on the back of the overalls. 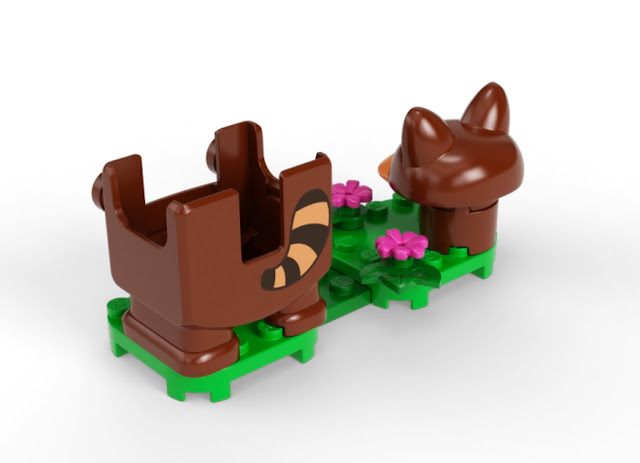 I can see the logic of this, as a tail would have to be sturdily attached to allow the Mario unit to be handled roughly around a built course. It would most likely fall off and frustrate the user, but nevertheless the lack of a tail detracts from this set, especially as this suit’s function is to "Make Mario Tail-Spin". 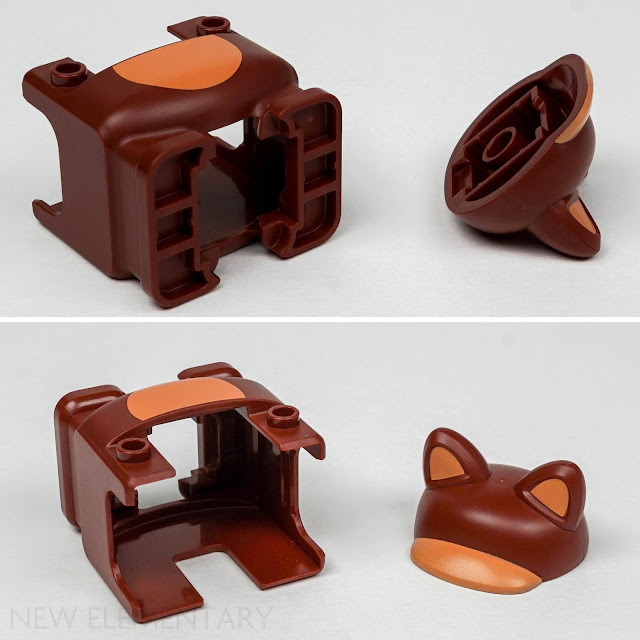 The cap is a recolour in Reddish Brown with Medium Nougat that first appeared in yellow shades in 71372 Cat Mario Power-Up Pack.

Build your own Mario

With no Mario available to try on these new outfits, what to do? Design one myself of course! 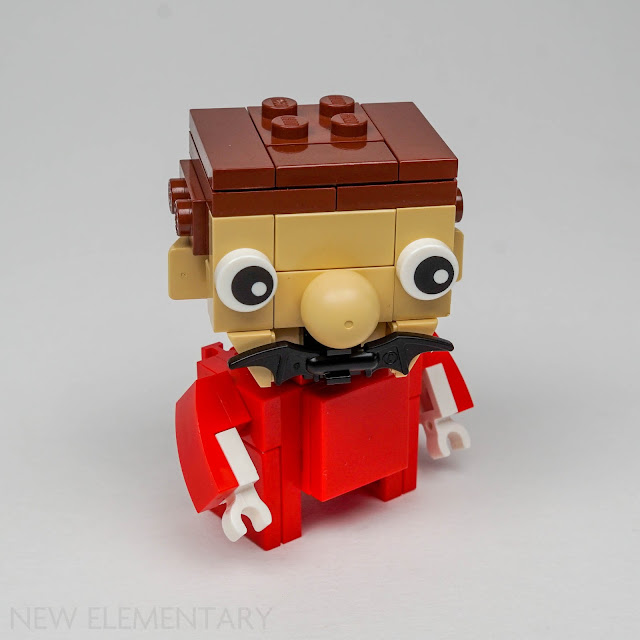 The internal overall dimensions of the overalls are just under 4 x 3 modules which meant a little experimenting to build something that slotted in comfortably without shaking about.

A 2x2 turntable allows my Mario to turn his head. The head itself is built around two of the Brick Special 1 x 2 x 1 2/3 with 8 Studs on 3 Sides (67329) which I explored a little in my Character Pack Series 2 review… I told you they would be useful. For those of you who would like to build my version, here's a breakdown image that you can figure it out from. 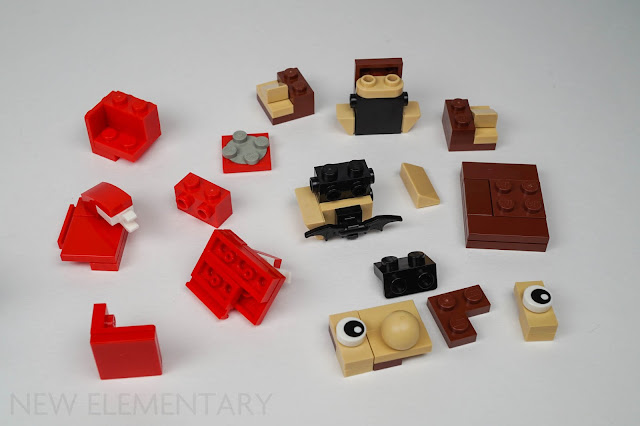 The hands I’ve designed clip on to the penguin wings well enough but I could not find a practical way to completely hide the arms under the wings without compromising other parts of the design: 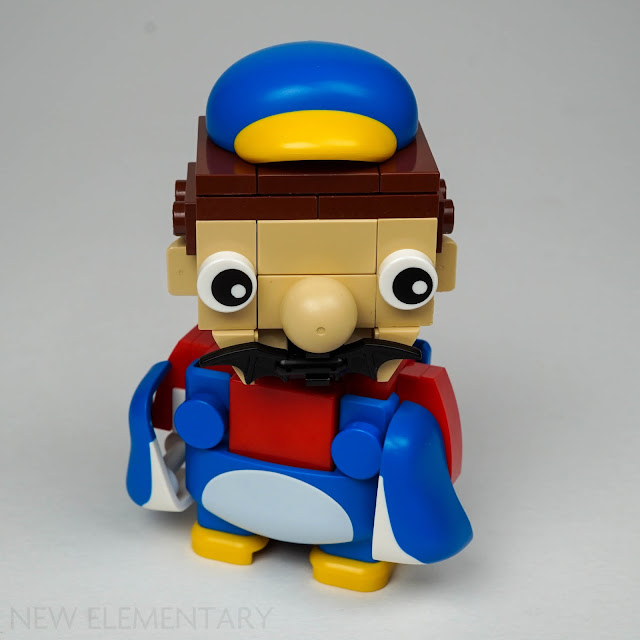 For Tannoki Mario, using a brick-built figure means a tail can be added to complete the look: 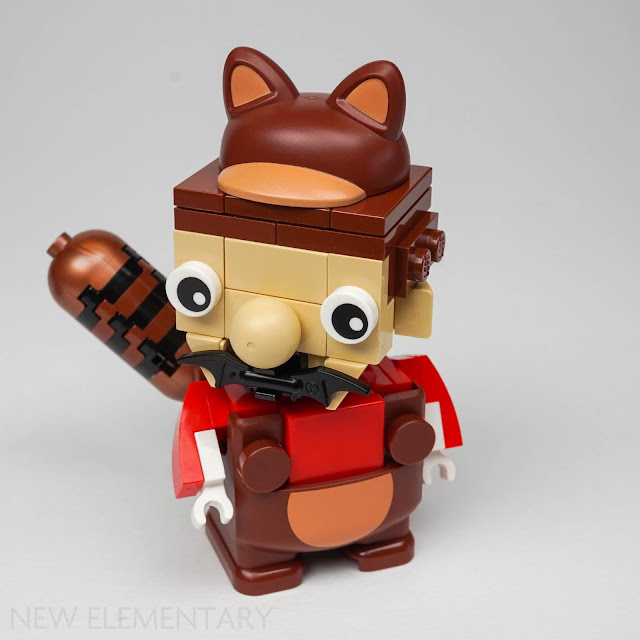 Here's a breakdown of how I attached that: 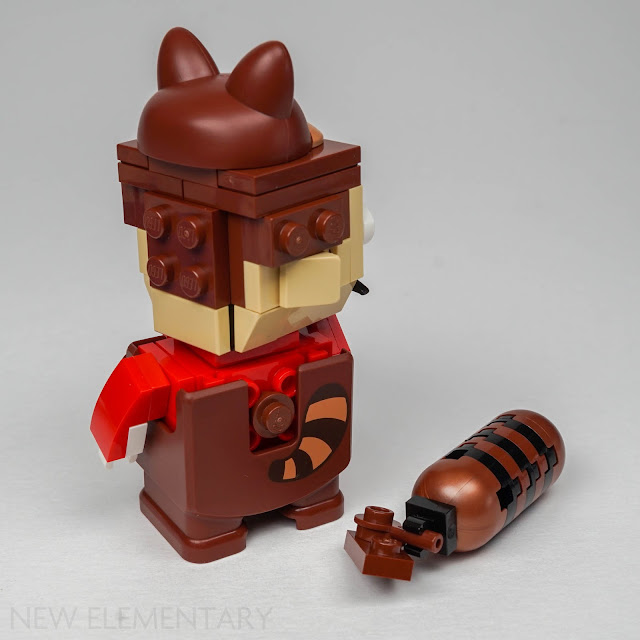 The hats and wings could be interesting to work into your MOCs somehow but naturally these packs are aimed squarely at existing LEGO Super Mario consumers, and this review is of course lacking an appraisal of how these new outfits add to gameplay when combined with other sets in the theme. If you'd like to see this, check out video reviews such as these by Tok Tok Family.

If you already have some of the previous line I am sure this will add a fun extra dimension, but if you don’t and yet find yourself with one of these Power-Up sets, you can now build your own Mario!


All text and images are © New Elementary unless otherwise attributed.
Posted by: Admin Posted on 12/28/2020 11:56:00 am
Email ThisBlogThis!Share to TwitterShare to FacebookShare to Pinterest
Labels: Super Mario