Aron Gerencsér (@_pohaturon) continues his 2021 LEGO® Monkie Kid coverage today with 80021 Monkie Kid's Lion Guardian, coming 1 March. Buying this set? Consider using our affiliate links: UK LEGO Shop | USA LEGO Shop | Australia LEGO Shop, for other countries 'Change Region'. New Elementary may get a commission. The products in this article were provided for free by LEGO; the author's opinions are not biased by this. 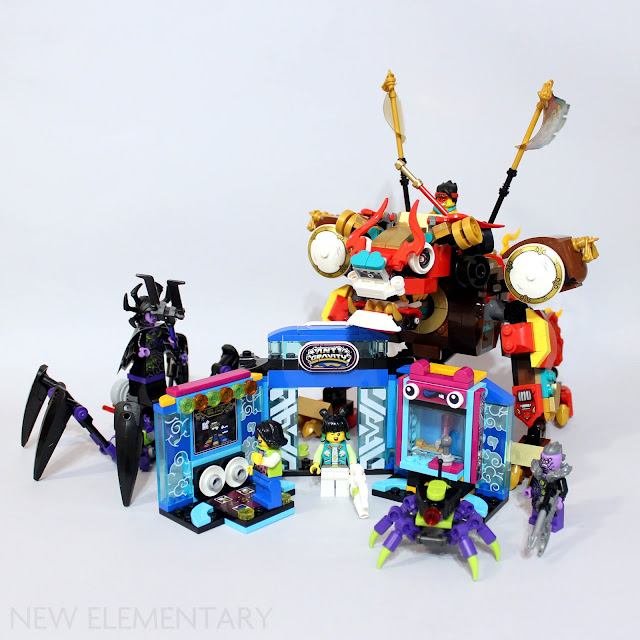 80021 comes with three moulds that are new in this wave of sets, two of which we showed already in previous Monkie Kid reviews: a new minifig hair piece and an angled bar holder - it has a stunning 14 of this latter part in Dark Purple/Medium Lilac (6338503 | 72869). 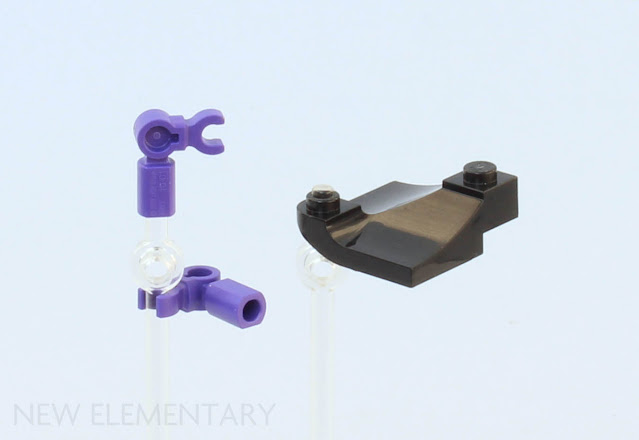 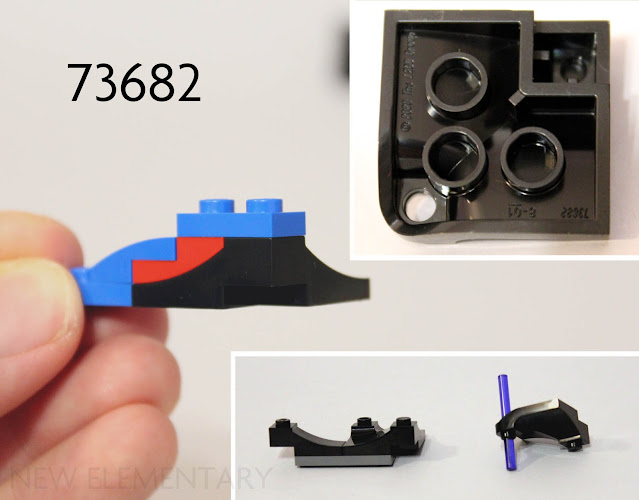 The new mould acts as a corner for the slope, with the corner rounded off, turned upwards and featuring a hollow stud. Designed to interact with the aforementioned slope, it follows the same geometry and so can interface with inverted bows. We get two of this new corner piece in Black (6338499 | 73682) in the set.

This new piece didn’t get my blood pumping, perhaps since I’m not much of a System builder. It sure is an unusual addition for those of you who like making buildings and such, particularly Asian architecture, though I definitely intend to find ways to subvert its intended purpose. 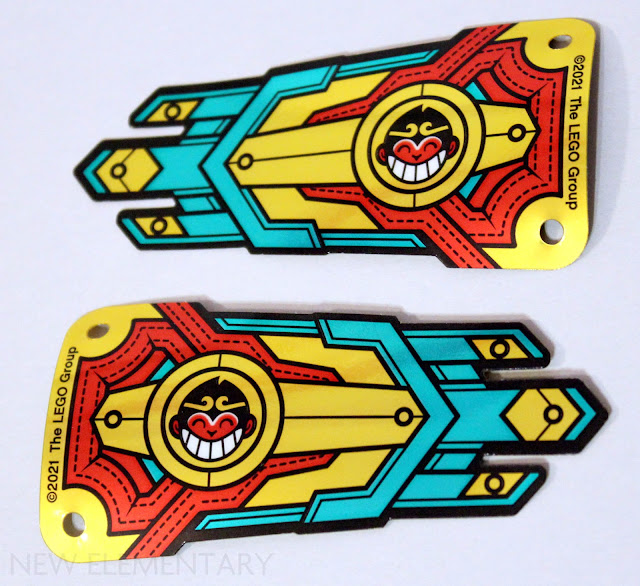 We also get a new plastic runner with a pair of flags, which are mirrored versions of the same design.

Interestingly, all non-minifig recolours in 80021 Monkie Kid’s Lion Guardian revolve around prints or the lack of them to the point where, technically, none of these are actually newly recoloured. 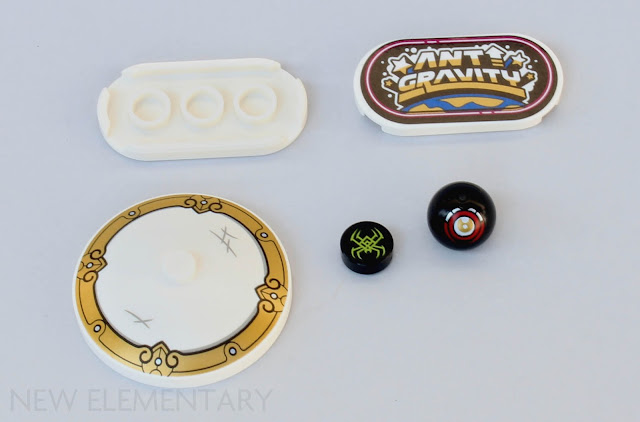 Monkie Kid’s Lion Guardian features quite a few rare and interesting pieces too. 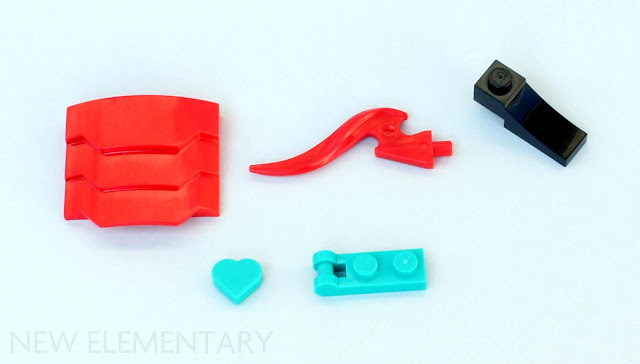 80021 is also a great source for pieces in Gold Ink/ Metallic Gold. None are new in this colour, but the Lion Guardian might be an easier sell for many than 80012 Monkey King Warrior Mech was. 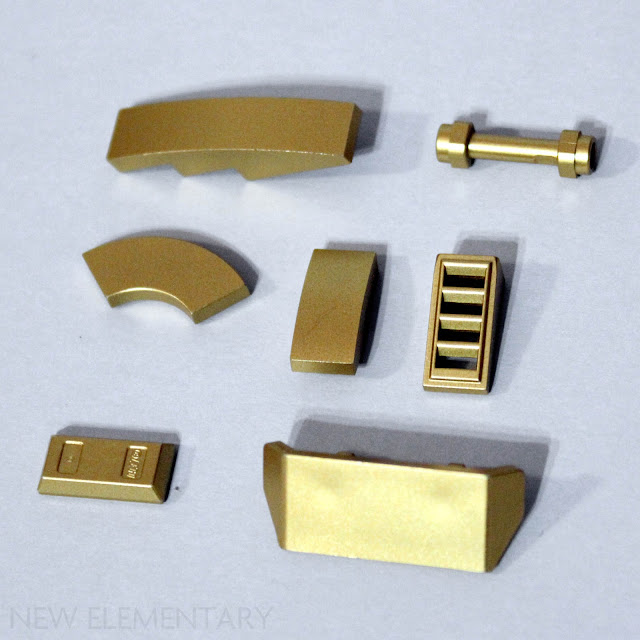 This is a decent selection for fans of the theme, including the protagonist and the main female character, Mei alongside the main villain of this wave, the Spider Queen and one of her henchmen.

As mentioned in my review of 80020 White Dragon Horse Jet, great side-builds are a recurring feature of this wave of sets. I also mentioned one instance where the side-build suprasses the main model, and this is it. 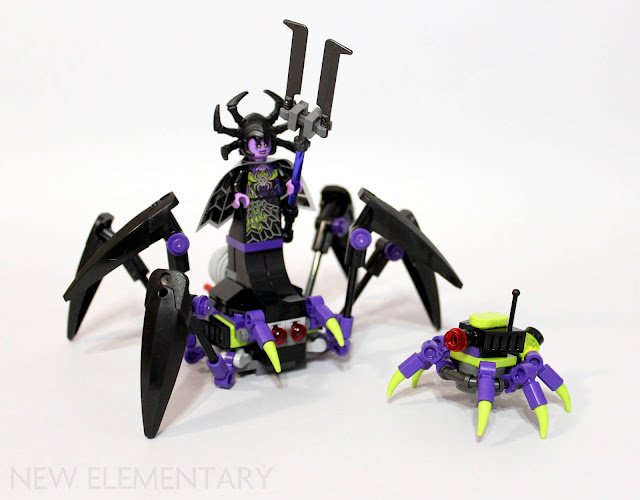 First up, we put together another one of the little spider drones, which quickly became a favourite little build of mine, and the Spider Queen’s vehicle-platform-thing. This is where all those new bar holders are used. 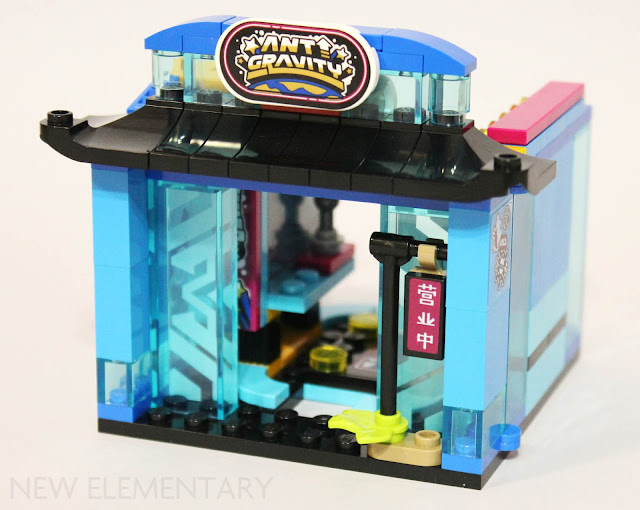 Then we move onto a fun little arcade section. Comprising three sections connected by hinges, we can close up the arcade to make it seem more like a building, or open it up for interior access. On the one side, we have a screen and control pad on the ground - both stickers - where our heroes can challenge the spider drone to a dance-off. 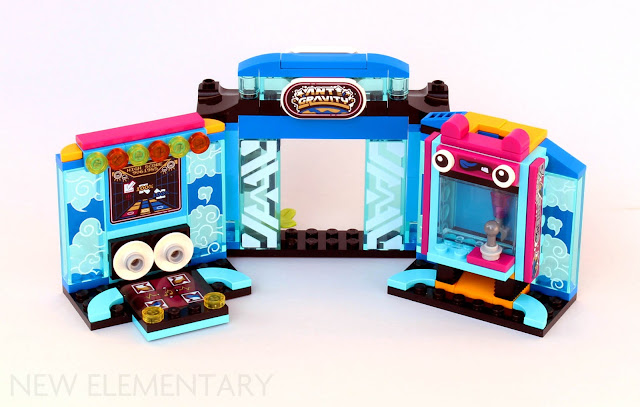 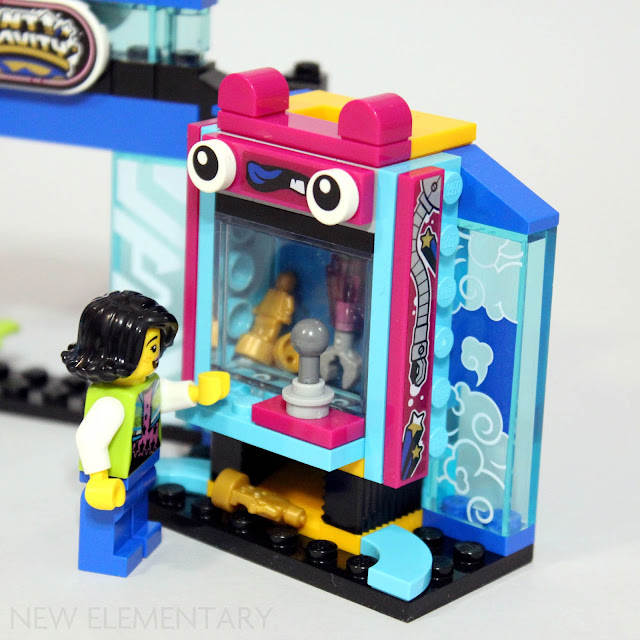 On the other side is a claw-game with a very simple mechanism allowing us to knock little statuettes through a receptacle. Funnily enough, the faux-joystick is too far up for a minifigure to comfortably access it. 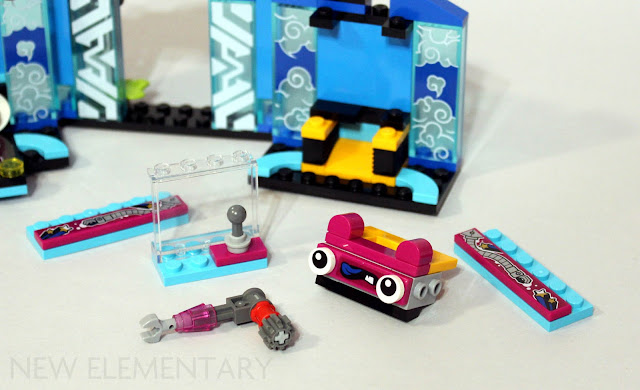 Considering the fun, bright design of this section, I’d have almost preferred getting a playset with a larger, more involved arcade location where our heroes are hit by a surprise attack while having some downtime - and I say this as someone who usually prefers wacky vehicles, mechs or creatures to buildings.

Based on the above you might have already guessed that I’m not exactly a fan of the Lion Guardian itself. This archetype of creature build is so ubiquitous in the non-realistic LEGO themes that I would have thought the designers have it down to a science. 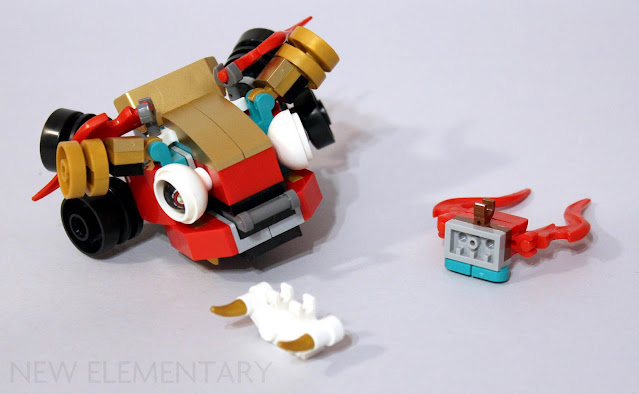 We start by building the head, which is definitely the high-point of the process. The design is clearly based on the traditional lion statues that can be seen in Chinese architecture - not unlike the Nian creature from the Chinese New Year set 80106 Story of Nian . Wheel hubs are used to replicate the round mane motifs found on these statues, and the whole thing is quite effective. 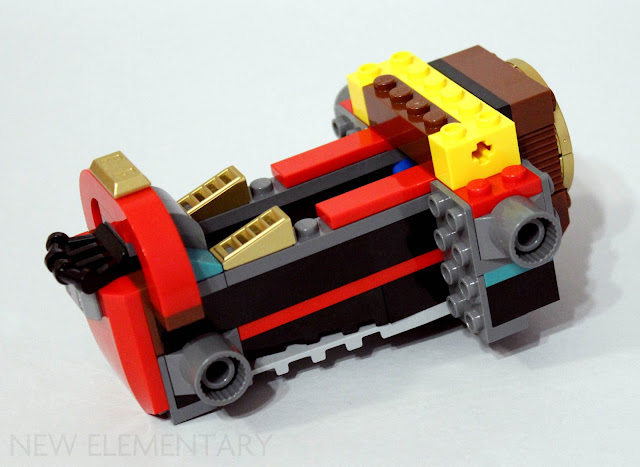 The head is followed by the torso, which is significantly less elaborate. This is to be expected, as it needs to facilitate a play feature and will also largely be obscured by the limbs. Nonetheless, following the particularly ornate head made the sudden shift all the more jarring. 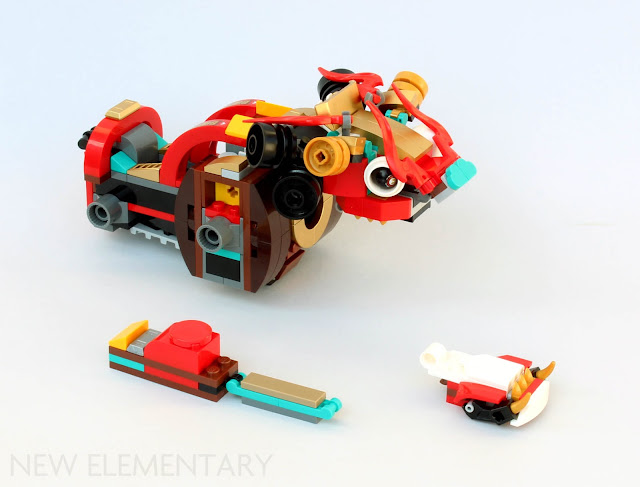 Once both the head and the body is complete, we finish off the play feature. The lion’s lower jaw is connected to a sliding mechanism, allowing us to open and close it by pushing a section forward on its back. The jaw’s range of motion isn’t huge, but the feature works well enough. 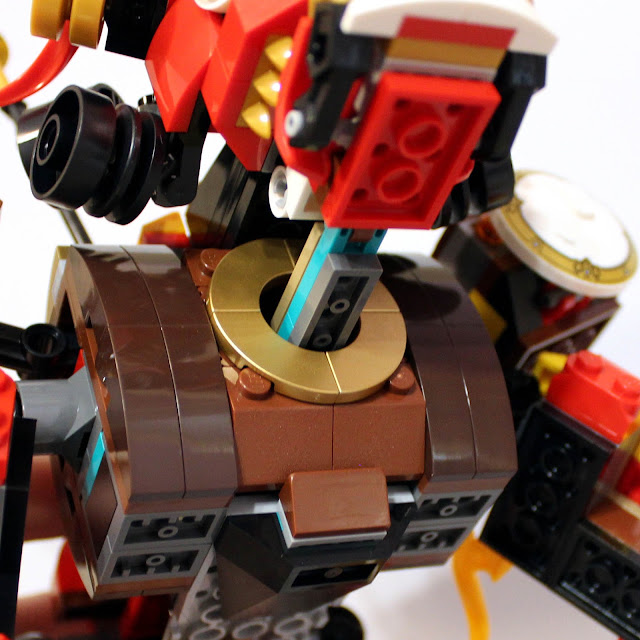 Next up come the limbs, which feel the least finished parts of the design. This is where my feeling that the set could have used quite a bit more refining was solidified. While building this right after the absolutely phenomenal 80020 probably didn’t help its case, even when not accounting for those elevated expectations this lion just doesn’t clear the bar. 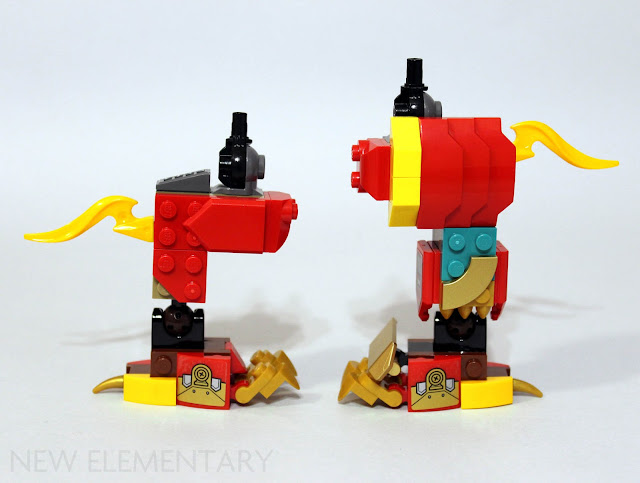 After the limbs are attached, we move on to the two drums above the lion’s shoulders, which double as missile pods. I appreciate the idea here, hiding the spring loaded launchers in the traditional drums, but the execution leaves much to be desired. The shaping is a bit awkward, there is a noticeable gap between the brown section and the white dish, and the mechanism intended to lift the dish out of the way compromises the looks. This is another section of the build that could have used some more passes. 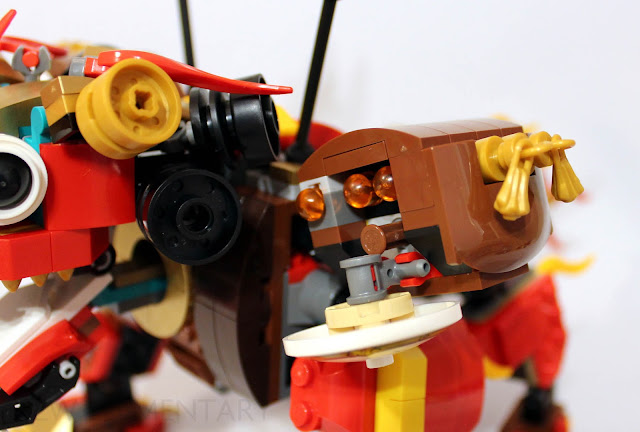 Finally we add the tail and the flagpoles, and the lion is complete. 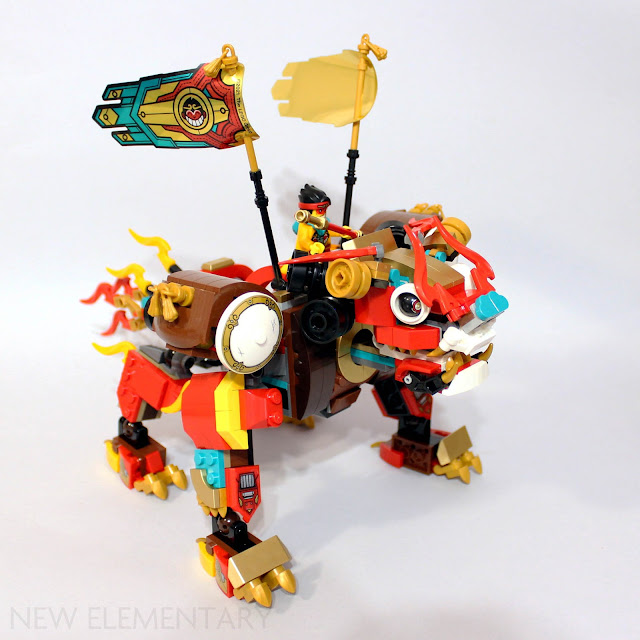 The main model in 80021 definitely lacks that wonderful “oomph” I felt when finishing The White Dragon Horse Jet. Having also recently built 71719 Zane’s Mino Creature which feels very similar - quadruped fantasy creature, head-related play feature, ratchet jointed limbs - I felt like the Lion Guardian was trying to do a lot of the same things, but ended up being a downgrade.

While we have two extra points of articulation - the shoulders of the forelegs - the armour on the legs and the wheel hubs on the head render the actual posability null. I’ve mentioned my grievances with the drum-weaponry, but the main issue here is that the model sort of looks unfinished - especially the limbs. I understand part limitations and budgets need to be considered, but when there is a large pool of similarly sized and priced quadruped creature sets that pull off the final look better, I can’t help but feel that this set could have ended up in better shape too. 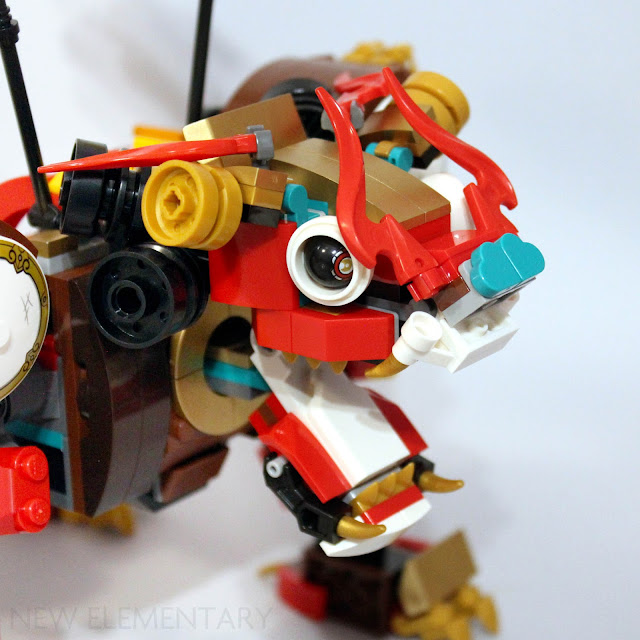 Switching to a more positive note - the chomping function works well and can be fun for younger builders, having the large lion taking a bite out of the spider drone. Plus, be my opinions of the lion as they may, the arcade side-build is a definite highlight of the set and have me thinking that the Monkie Kid theme should spend some more time exploring locations instead of vehicles - the Panda convenience store seen in Caz’s recent review of 80011 Red Son's Inferno Truck is another example of this theme knocking a location-build out of the park.

Despite the criticisms I lodge against 80021 Monkie Kid’s Lion Guardian, and it being the least impressive of the sets from this wave, it should be pointed out that this is a stance informed by the absolute stellar quality of its contemporaries. This is, by no means, bad. We have a nice selection of important characters appearing as minifigs, a fun side-build and a pair of exciting new moulds which hold quite a bit of MOC-building potential.

The main model definitely would have benefited a great deal from more refining, and its shortcomings are amplified by the fact that it can’t chalk them up to being experimental. We’ve seen this archetype done better, which is only more reason to focus on the location-based part of the set in future designs.

Posted by: Admin Posted on 2/25/2021 12:00:00 am
Email ThisBlogThis!Share to TwitterShare to FacebookShare to Pinterest
Labels: LEGO® Monkie Kid™, Set review