The LEGO Group is taking us on a journey in time. Back to Medieval times and, by association, back to the Classic Castle sets of the 1980s. 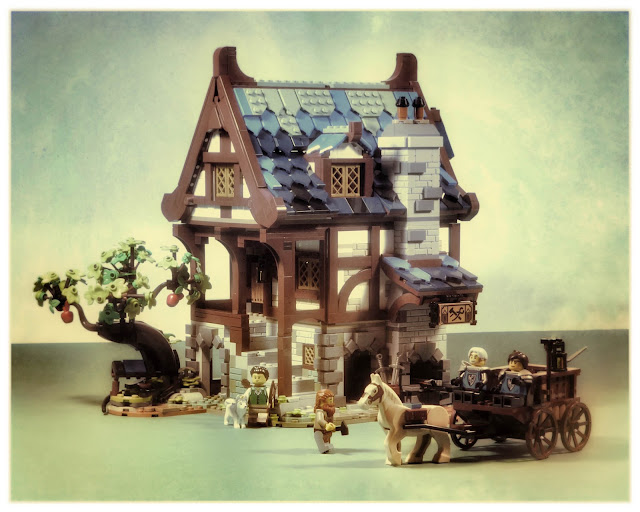 21325 Medieval Blacksmith is beautiful: this isn’t just a half-timbered house with a characteristically charming second-storey overhang, oh no, there is much more to it. The three floors are packed with authentic-looking details and clever features.

The included minifigures are a practical-looking blacksmith, an archer and last, but not least, a couple of updated Black Falcons. For those that are unfamiliar with them, a simplistic explanation is that Black Falcons were an opposing force to the Lion Knights of the Classic Castle sets I longed for in my childhood so I am fairly excited about their unexpected inclusion.

Additionally there’s a horse with a wagon, a pumpkin patch, a well, a bowed apple tree, a stocked wood store, a dog, a cooking pot on a swing arm… in short, everything a medieval smithy might need… except an out-house or garderobe perhaps? 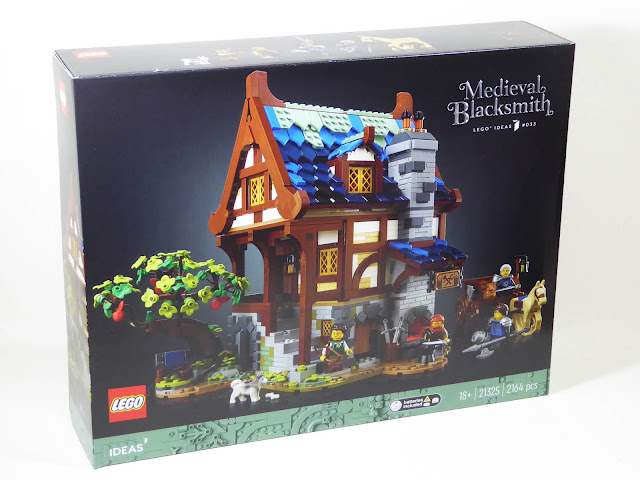 Even just seeing the box warmed my cold metal heart to a more malleable state and workable temperature. It features the Adult Portfolio branding and some eye-catching, Gothic-influenced typography that looks like wrought iron.


Before a blacksmith could work his own brand of magic by creating ingenious wrought iron things, he would have to smelt ore to extract the essential element. Wes Talbot and Austin Carlson have used their brand of magic too: extracted the essential elements of Clemens Fielder’s original Ideas submission and wrought an ingenious LEGO® version, complete with a nostalgic kick from that pair of Black Falcons.

I could bang on about this all day, and will do so in part 2 where I examine the build and techniques, but today let’s take a look at the parts available in the set. 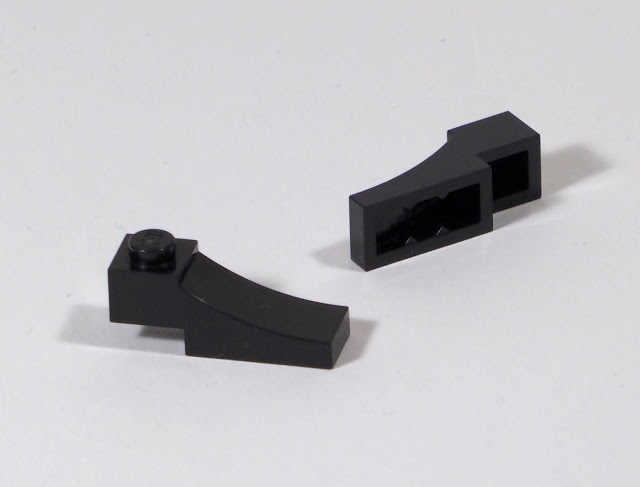 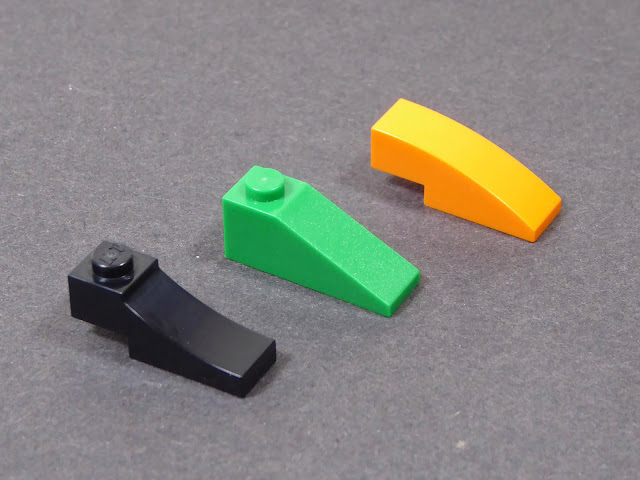 70861 is an interesting element; it has much in common with the other 1x3 slopes but I don’t think it should be categorised that way. I’m going to call this piece ‘the shoe brick’ because that’s what it makes me think of, and it will be helpful to refer to its ‘toe’ and ‘heel’ for clarity. For example: the heel has a characteristic 1x1 plate cut-out.

Even though the part is called ‘inverted’ by Rebrickable and BrickLink (concave might be more accurate?) I think the family it most happily resides with is the 2-module-long bows. 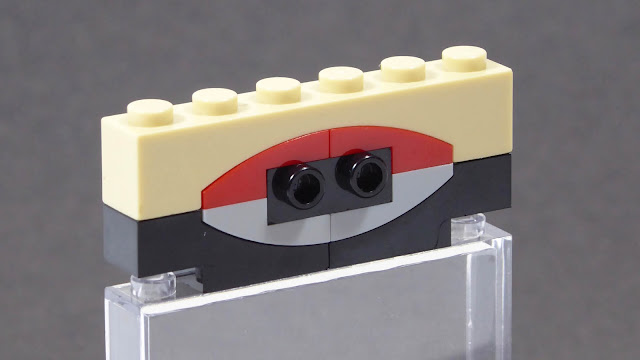 Here we can see it comfortably accommodates the 1x2 inverted bow, and therefore it will neatly sit with the other elements that share the same curvature. 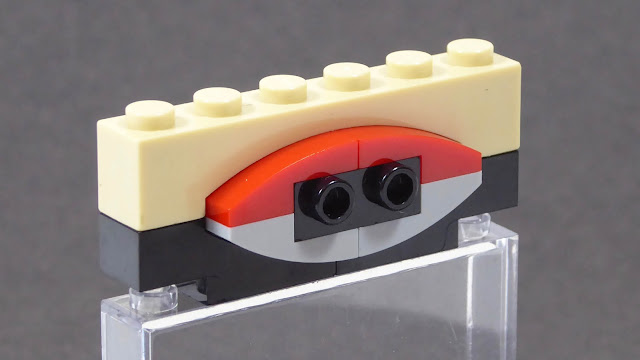 I’ve pictured Brick Arch 1 x 6 Raised Arch (92950) too because it is very nearly the exact mirror image of a pair of the shoe bricks placed toe-to-toe. My convex inner construction of bows and inverted bows moves freely between the 1x6 arch and the shoe bricks.

Swap the shoes to the top of the arch and I can see how this might create interesting repeated features. 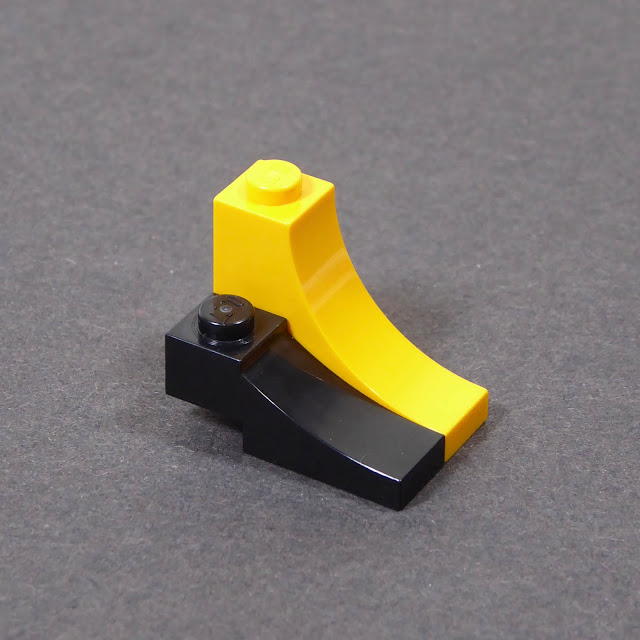 The shoe pairs nicely with a few other arches and bows; these are a couple I tried on for size. 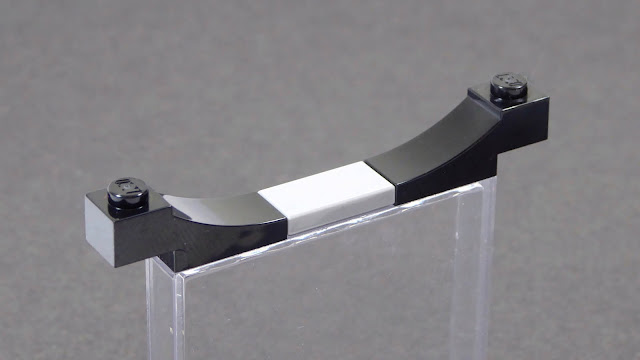 Unlike many other slopes and curves, the shoe’s height at the toe is exactly one plate high which allows for flush interfaces with all manner of things. 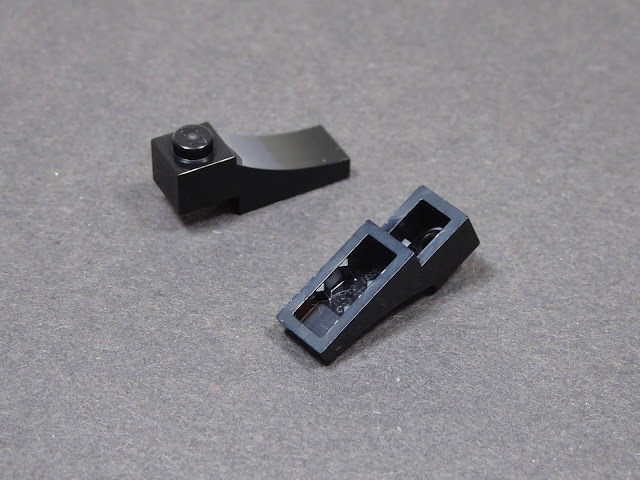 The sole of the shoe brick reveals a potentially useful half-module offset connection.

It’s always nice to build something with new parts, but with just two at my disposal I was only able to take these new shoes for a short walk to break them in. 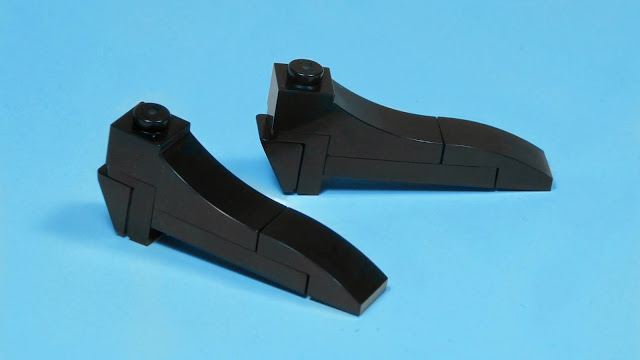 There are a small number of recoloured and rare parts in 21325 Medieval Blacksmith. 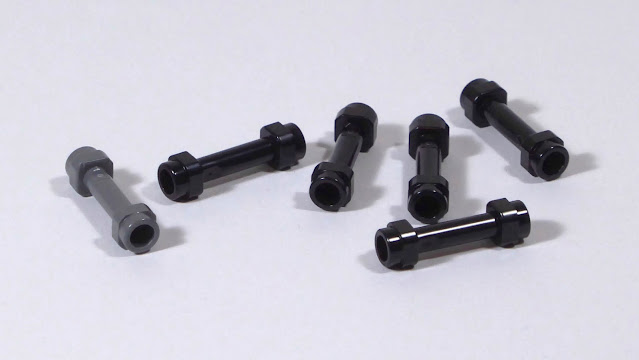 I thought it might be nice, given the subject matter, to highlight the fruits of our blacksmith’s efforts. 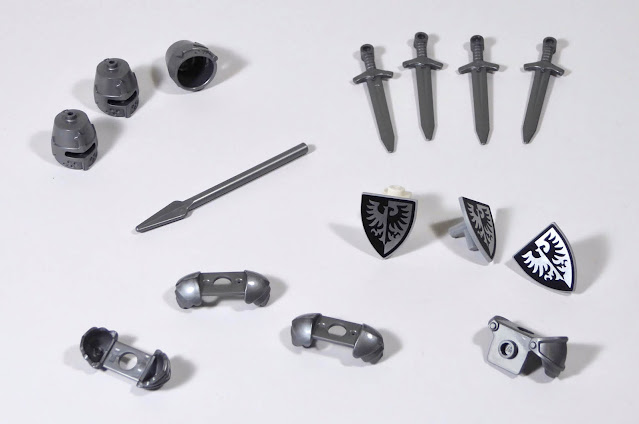 Although there wasn’t much in the way of new parts to discuss, what 21325 Medieval Blacksmith does have is a fair few pieces in considerable numbers. 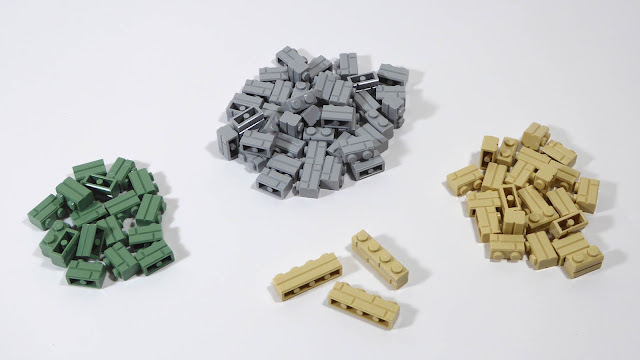 A total of 89x Brick Special 1 x 2 with Masonry Brick Profile (98283) are present and that breaks down into: 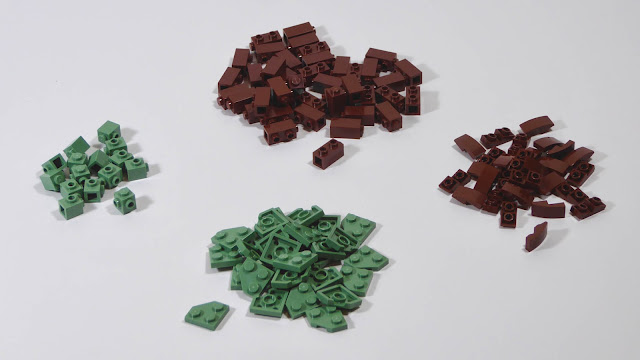 Some more useful parts appearing in high quantities are: 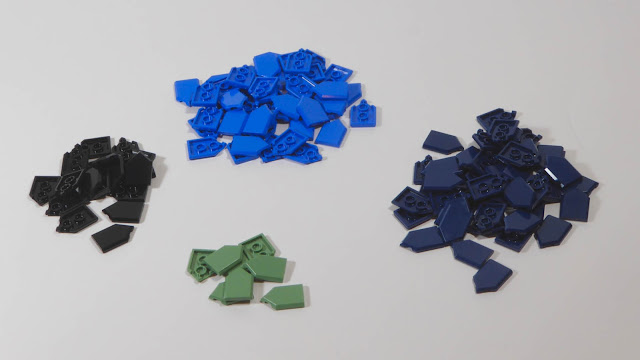 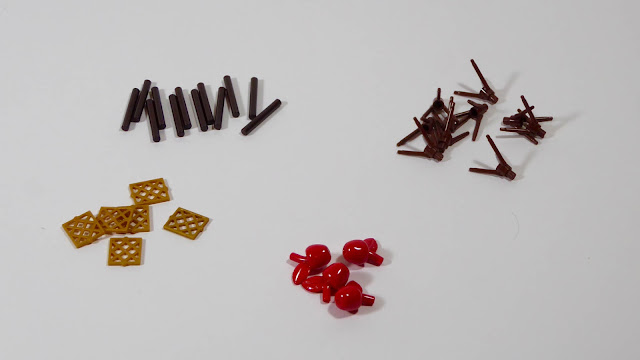 And finally, although their quantities are not massive, these elements are noteworthy too:

There are no stickered elements, which is my preferred state of affairs. Aside from the aforementioned Black Falcon shield there is just one unique printed part: the sign above the forge. Tile 2 x 4 Shop Sign, Black Hammer and Tongs in Medium Nougat  (87079 | 6337061) which I’ve pictured (upside down!) here together with the other, non-exclusive printed parts. 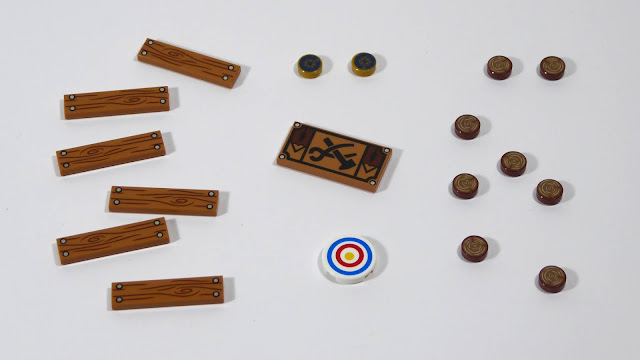 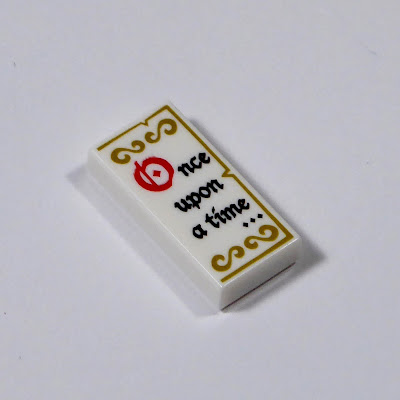 As I discovered later still, in my over-excited hurry to start building, I entirely missed another printed tile… not exactly rare, but in the interests of thoroughness here is Tile 1 x 2 in White with 'Once upon a time...' and Gold Scrollwork Print (6157985 | 3069).

Minifigures and animals in 21325 Medieval Blacksmith

The minifigures are just brilliant. 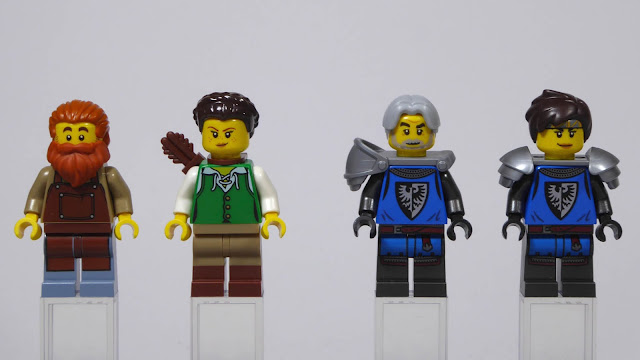 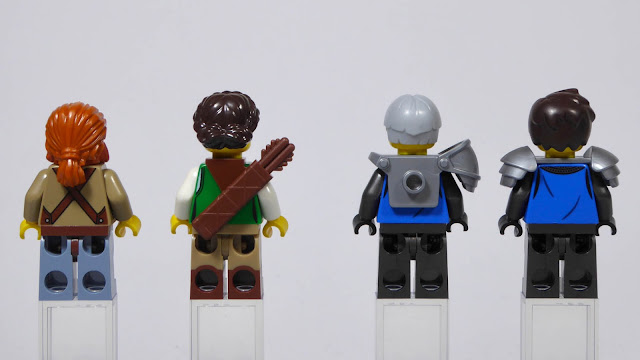 Each one has something to recommend it. The titular Blacksmith features a wonderfully appropriate new printed torso (6335769 | 76382).

Last but not least is the second Black Falcon soldier, another female character cast in an atypical role and, having watched my daughter playing, I appreciate  that this soldier allows further opportunity for inclusive play. Of the four minifigures, this is the rarest face print (6306191) although her hair (6220908) has been seen a number of times before. 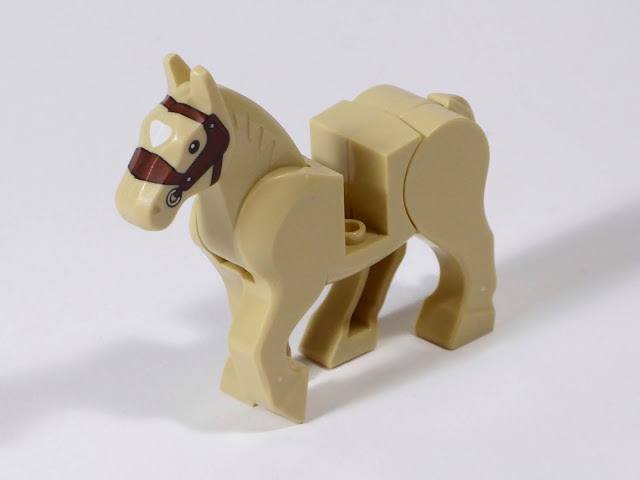 Our cart horse, featured here in Tan for the first time with a brown bridle print (6343565 | 10509), is a mould introduced in 2010 but fairly rare in every colour other than Reddish Brown. There’s also a husky dog and a (seemingly obligatory) green tree frog! No, goat though, which I know is a big disappointment for many; my understanding is that the mould for the goat is now unusable.

Now continue to part 2 of this review for an overview of the build. If you're buying this set, consider supporting us by using our affiliate links: UK LEGO Shop | USA LEGO Shop | Australia LEGO Shop, for other countries 'Change Region'. New Elementary may get a commission.