Continuing our LEGO® Monkie Kid reviews, today we have Tim Goddard (on Instagram) examining 80008 Monkie Kid's Cloud Jet, as well as creating a couple of cute little alternate builds! The products in this article were provided for free by LEGO; the author's opinions are not biased by this.

This is the second of two Monkie Kid sets that I have been sent to review and compared to the other, 80009 Pigsy’s Food Truck, this one is more to my liking. The Cloud Jet looks great, with interesting angles and vivid colours, and I found it to be much more interesting build-wise. 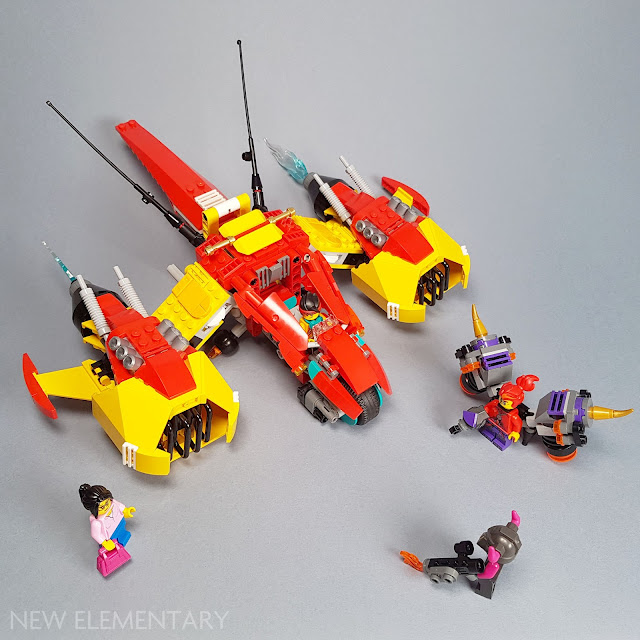 The angles are achieved mostly with some clever - although not revolutionary - Technic construction. For example, the variable geometry landing gear rests on the body, where it makes contact with a Technic Ball W. Cross Axle (4211375 | 2736). A lot of thought has obviously gone into realising the funky design with legal techniques, and the Technic parts do not compromise the appearance of the overall model as is often the case.

The set has 6 bags and this is how the build unfolds: 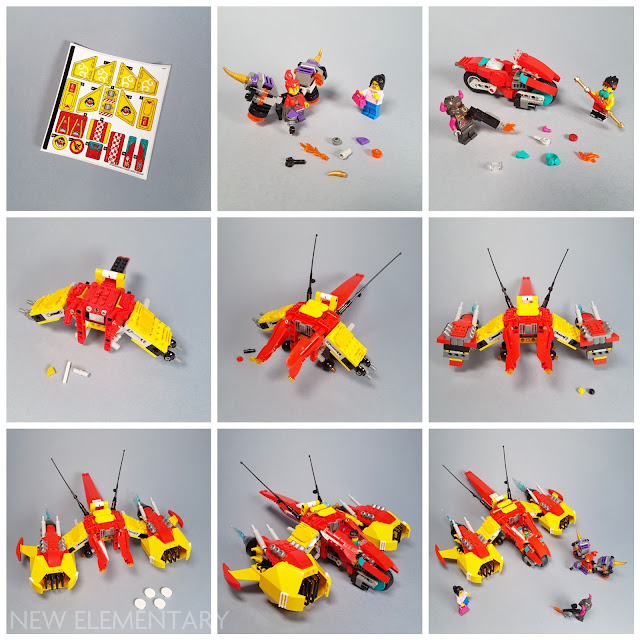 I also like the panels around the front of the craft that sit either side of the obligatory pop out bike (which may be an old idea but the function is always pretty fun). It is just a shame that there isn’t much covering the rather ugly gap between the panels, which is apparent even when the bike is in place. The bike itself is ridiculously large and has handlebars that are impossible for our titular hero to hold - but hey, it has exclusive teal hubcaps! Namely Disk Ø24 in Bright Bluish Green/ Dark Turquoise (6296502 | 2723). 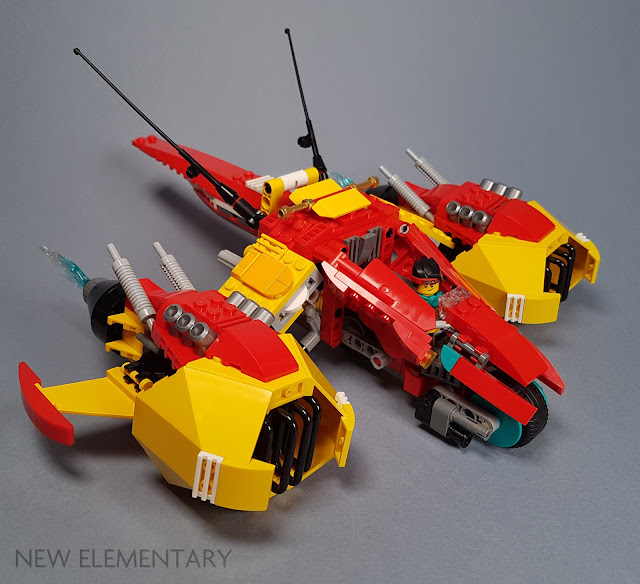 The stars of the design are undoubtedly the engines with their plethora of vents and exhausts. Eero Okkonen has already examined in great detail the history and geometry of the 'Tipper End Family' of LEGO® pieces and used them to great effect in some of his own creations, and this set sees the welcome return of End Piece For Truck Body in Bright Yellow/Yellow (6293858 | 30022), which is combined with Cockpit 6x6x2 (6293859 |35332) to form an elegant engine intake. The cockpit part is rare, having only appeared in one LEGO City set, 60164 Sea Rescue Plane in 2017, under a different Design ID (35332).

Given the high profile of the Monkie Kid line it is surprising to me that there are so few new moulds and recolours across the range. Sure, there are some new and exciting bits but not as many as you might expect to see compared to lines like Ninjago. I have a completely ungrounded theory as to why this is; LEGO have put a lot of time into researching the Chinese market as this line is intended to be its big push into that massive, lucrative sector. Maybe all the new pieces were designed and ready to go last year and a lot of these have since found their way into other sets before the big Monkie Kid release, after months in market research hell? It would not be the first time parts designed for one range have been released in another first (such as printed tiles from LEGO DOTS). 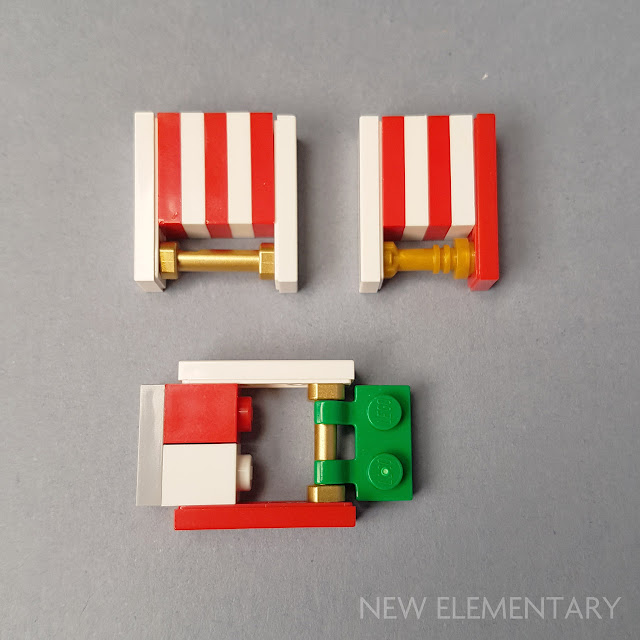 This part has some exciting potential compared to the old lightsaber mould; when you place a tile on each end the space between is exactly 5 plates high, which is the width of 2 bricks (shown above, top left). This makes it very helpful for inverting studs. Combined with the 3.18mm bar in the middle, this makes it very useful for all sorts of SNOT building and of course it is going to be great for general greebles. On the old lightsaber piece (above top right) the space is an unhelpful 4-and-a-bit plates (about a quarter?).

I almost missed that this piece is also available in Dark Stone Grey/ Dark Bluish Gray but with different name and Design ID; Handle, No. 2 (6296951 | 66909). The reason for those differences will be that different moulds are used for standard parts and ink effects, due to various tolerances.
The Dark Bluish Gray version is available in 3 other Monkie Kid sets (but not this one). LEGO, if you are listening, I would love this part in even more colours please, light grey for example! 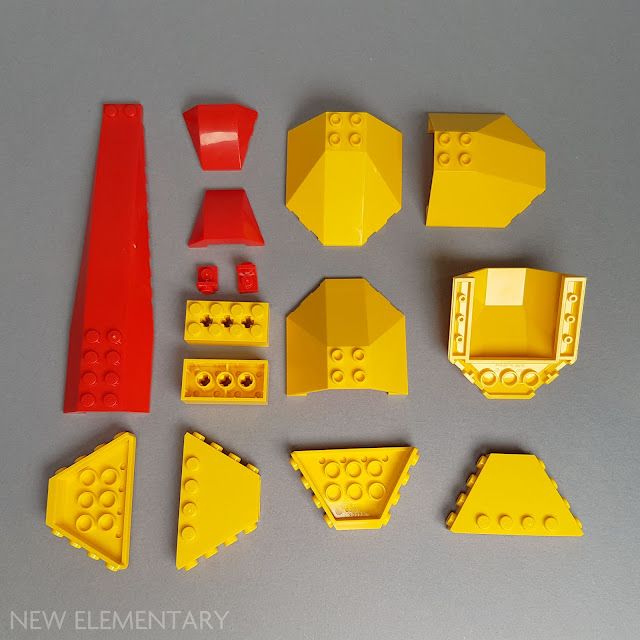 These are some of the recolours, rarities and parts of general interest in this set: 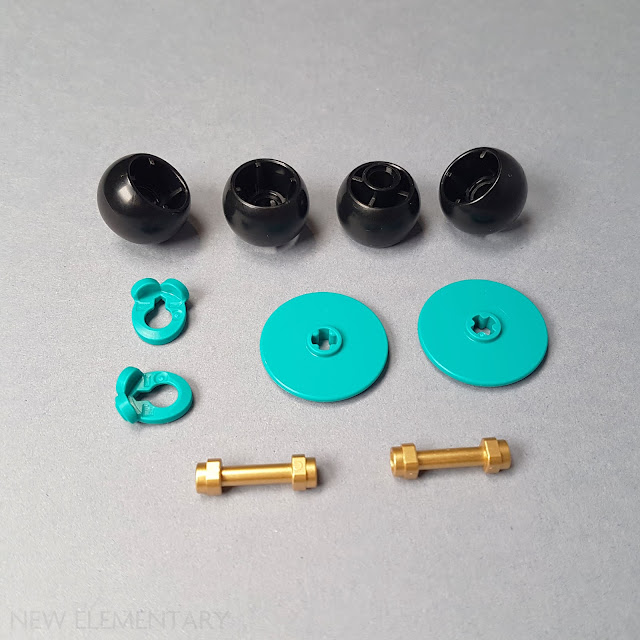 Finally, a tiny little alternative model or two. Whenever a new minifig accessory part comes out I always have a good look to see if it has other potential uses. 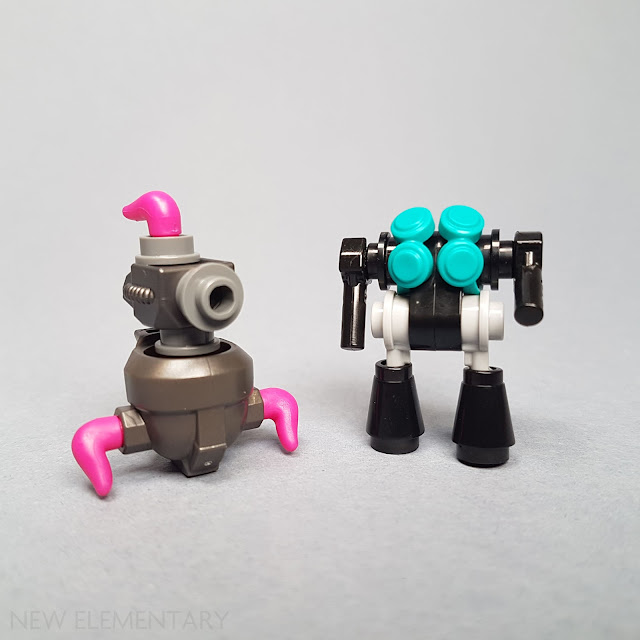 I must admit to writing off the new headphones Mini Accessory, No. 15 in Dark Turquoise (6296942 | 66913) as nice but not very useful when I first saw it... but I was wrong! It actually has great potential as eyes and I can see it being used in a variety of robot or alien designs now that I have my hands on it.

READ MORE: Which LEGO sets from September have the highest proportion of new elements?