We take another trip into LEGO® part history today to discover a kind of piece introduced 51 years ago that is still found in sets in 2020; 'tipper ends'. They're a passion for Finnish LEGO builder Eero Okkonen and today he delves deep into their geometry and reveals building techniques utilising them.

As we all very well know, adults complain 64% of the time that everything was better when they were kids; the only LEGO® bricks were basic angular blocks (and lost behind the radiator probably) and you could build everything based on your own imagination and didn’t have to follow the instructions and it made you a better person in the end. I don’t think like that, and one of the biggest joys depicted here on New Elementary and in contests like Iron Builder (and hopefully in my own work) is finding new, fresh uses to odd and curious parts, no matter what their original use in the sets was. 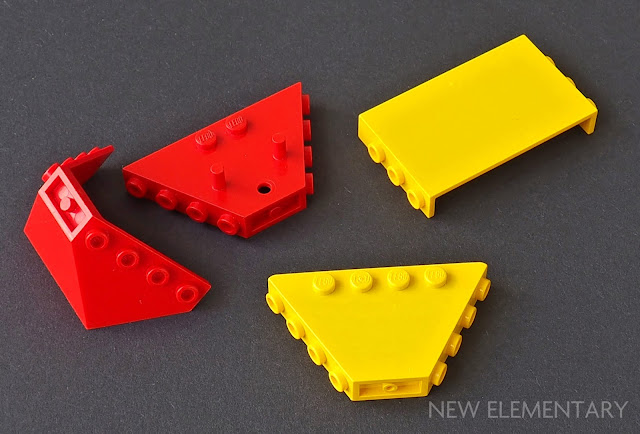 This article is about what I will call the Tipper End Family; today I’ll introduce the parts and their history, then go through their dimensions with a series of tablescraps and explanatory pictures, then tomorrow show some older builds of mine using these pieces and close with an unpublished build.

The Tipper End family originated in 1969, thus likely existing in the childhood of many of those “basic-blocks-were-better” type of adults, when Design ID 3145 first appeared. BrickLink call it ‘Vehicle, Tipper End Flat with Pins’ but confusingly, its ‘pins’ are not pins like Technic pins but short bars… that are not quite like bars. It made its debut in sets 125 Tipping Wagon and 120 Complete Freight Train Set with Tipper Trucks, coming in White in both.

It was then introduced in Black in 1970, Bright Red/ Red in 1972, Bright Yellow/ Yellow in 1973 and Grey/ Light Gray in 1977. Yellow and red are the most common colours, with the grey ones only available in one set: 163 Cargo Wagon. Images within the instructions for that set reveal the possible intended purpose of the hole and two studs on this piece:

The part retired in 1982, the last appearance being in 599 Super Basic set. However, this was not the end of Tipper End Flat. The part was reincarnated 14 years later in 1996’s Classic Town set 6581 Dig ’N’ Dump (pulchritudinous name, right?) again in yellow but this new version, Vehicle Tipper End Flat without Pins (30022), exchanged the pins and hole for two extra studs. Otherwise, the parts are basically the same. 30022 was introduced in grey in 2000, again being available in only one set, and in Bright Orange/ Orange in 2015. In yellow, the part appeared twice in the 2010s but the most recent appearance is this very summer, in 80008 Monkie Kid’s Cloud Jet, where four are used in very elegant manner to form the air intakes of the jet engines. We will look at this set in more detail on another day.

Tipper end got a wild and interesting cousin in 1972 when Vehicle, Tipper End Sloped (3436) made its debut in 378 Tractor, appearing in another nine sets. Yellow is the most common colour, while the red variety came only in two sets. Alas, the part was retired in 1998. I mourn this loss; it is extraordinary.

Panel 1x6x3 with studs on sides

According to the BrickLink category system, Panel 1 x 6 x 3 with Studs on Sides (98280) is not related to tipper ends, but their similarities are obvious: sides that are half-a-plate thick, with recessed side-studs. 98280 doesn’t have antistuds on its inside wall however, and overall is simpler: its lack of special angles makes it less interesting.

It first appeared in Medium Stone Grey/ Light Bluish Gray in LEGO City sets of 2012 and most recently in this year’s 60246 Police Station. It was introduced in yellow in 2013, orange in 2014 and Dark Green/ Green in 2019. The most common use in official sets seems to be as the back of six-wide vehicle cockpits.

Having a sturdy LEGO System piece with studs and antistuds piques the interest of an AFOL mind – especially if uncommon angles are involved! The sides of 3145, 30022 and 3436 are isosceles trapezoids with a 120° angle to the base and a 60° angle to the top, making it essentially an equilateral triangle with one tip cut off. The sides of this triangle are six studs wide (and four studs where the ends are cut off). It helps if you imagine an equilateral triangle with side length of two studs projecting from the flat (bottom) end. 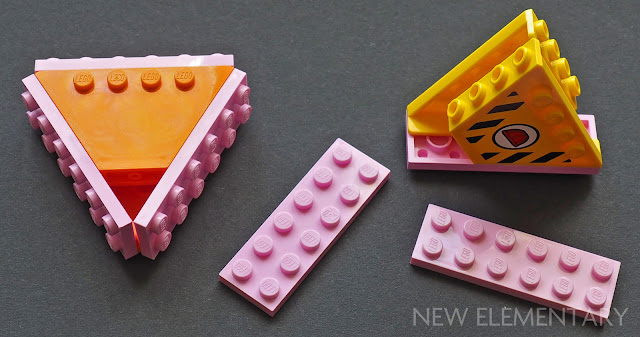 Yes, as you already might have guessed, you can make a ‘circle’ with them; actually it is an irregular dodecagon or, with some imagination, a pineapple slice. The tippers here are connected with part 32000, Technic Bricks 1x2 with holes (an illegal connection by LEGO standards). 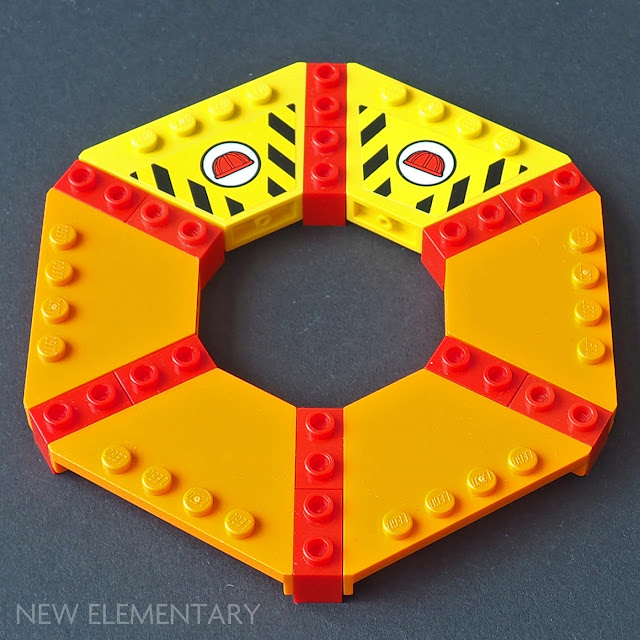 As the imaginary triangles in the middle are two studs in side length, 1x6 plates connected to the Technic bricks meet beautifully: 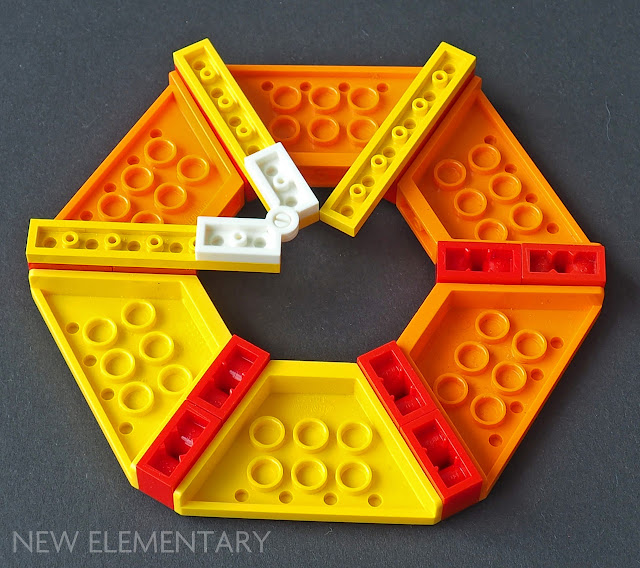 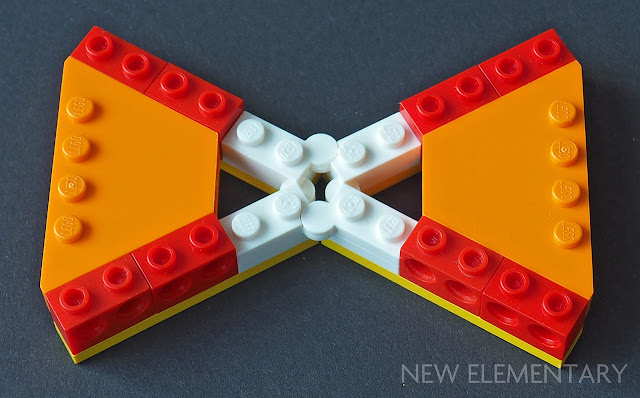 On this alternative bow tie below, the middle hole is one stud wide; again, between the sides of the hinge plate, there is an equilateral triangle with side length of one stud. (The SNOT brick is there just for reference.) 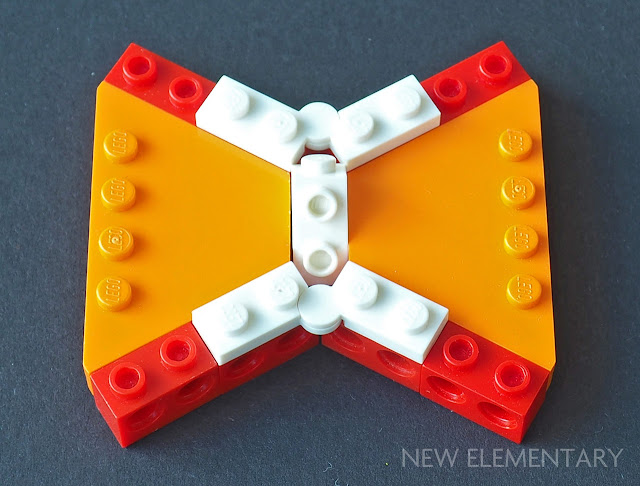 With a similar manner, futuristic structures and patterns can be arranged.

As the flat end of 3145 and 30022 are one plate thick, you can connect two (here by using old hinge pieces and the 2:5 ratio rule) to make a coffin for a very fat minifigure:

The original 3145 had its two ‘pins’, to enable the tipping effect. The pins simply lay between two studs without any connection, easily tipped and easily broken in a train crash. I doubt this would be acceptable in modern sets. 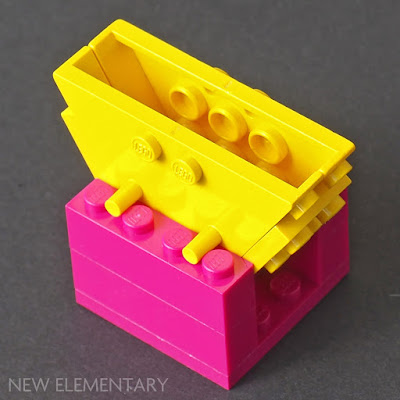 The bars connect to bar holes but don’t meet the same standard as modern 3.18mm bars like the lightsaber. They’re thinner at the tip, not connecting to the recessed stud of a Technic brick for example. They get wider near the base though and can be connected to a hollow stud, however this can not be detected by eye.

The ‘bar hole’ of 3145 is too small for a regular bar. The end of these ‘pin’ bars can be connected to it, but just barely, and I wouldn’t recommend using this weird connection: 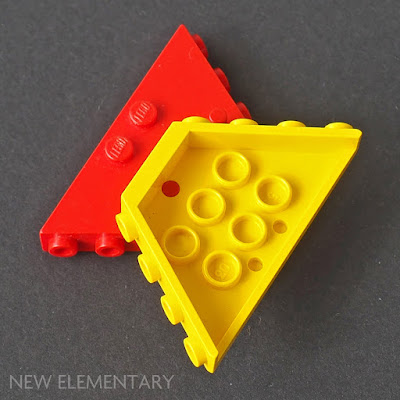 As noted earlier, 3436 adds more angles to the excitement. I warn you; the initial shape is very hard to describe with words, especially for one who is not used to writing about geometry in English. In side profile (or, in other words, in section view with the piece cut into two symmetrical halves) the angled slope in relation to the bottom is a little more than 135°; but the side panel itself is a symmetrical pentagon with three 90° and two 135° angles. Basically, most people would call this shape ‘a house’. 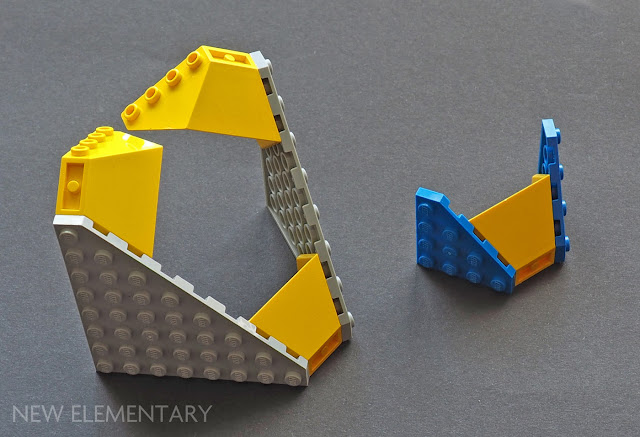 I’ll try to express this more mathematically: The side panel is a 1x4 plate (but thinner) with an isosceles triangle on top of it (making the roof of our pre-modernist ‘house’). The base of the triangle is four studs wide and it is two studs tall. In other words, it divides into two right-angled isosceles triangles with cathetus (or leg) length of two studs. This shape is the same as Tile, Modified 2 x 2 Triangular (35787), or would be if that tile’s sharp points were not cut short. 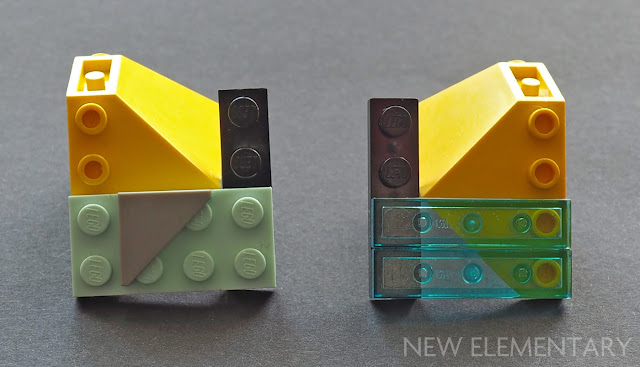 As seen on this ‘loudspeaker’ thingy below, gaps between the end panel are wider near the centre, as the angle of the profile is a little more than 135°. For the same reason, the tipper ends must sit on 2 x 2 plates to avoid intersecting with each other. 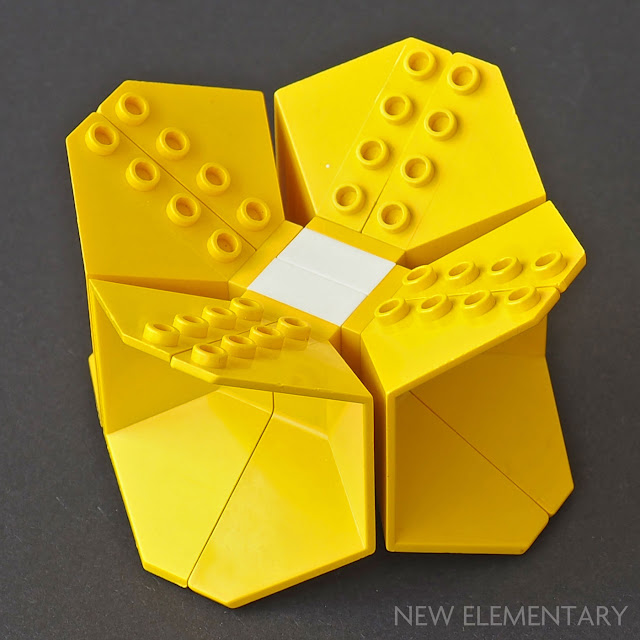 The studded sides are perpendicular to the centre, so two of these can be connected diametrically with some hinge plates – or could if I had 16 available. But here’s half of it. 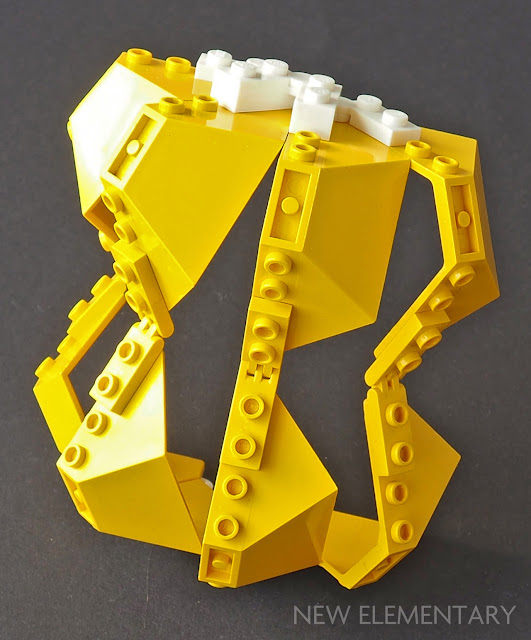 Four can be connected with swivel hinges, with their sides being on the same plane with the piece next to them. This is getting mind-boggling… 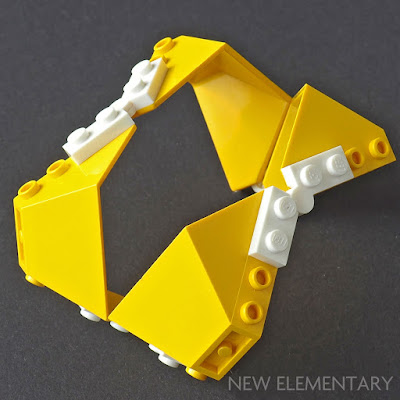 Here all the tipper ends are on the same plane, but the pattern is rather interesting, if challenging to use in an actual MOC depicting something non-abstract: 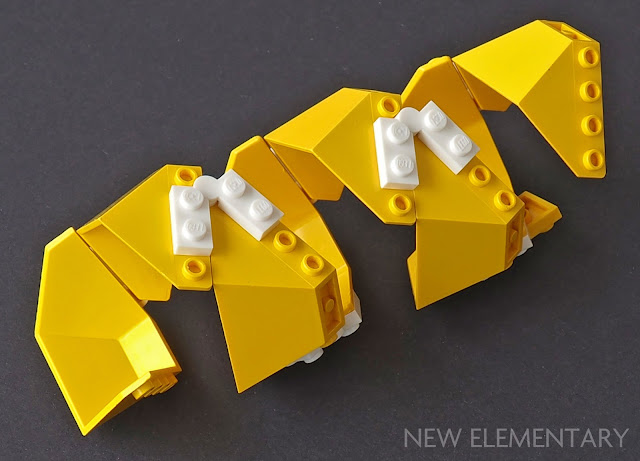 Now, the pinnacle of my tablescap section: “a thing that looks like the things that skilled people in the catering industry make out of napkins”: 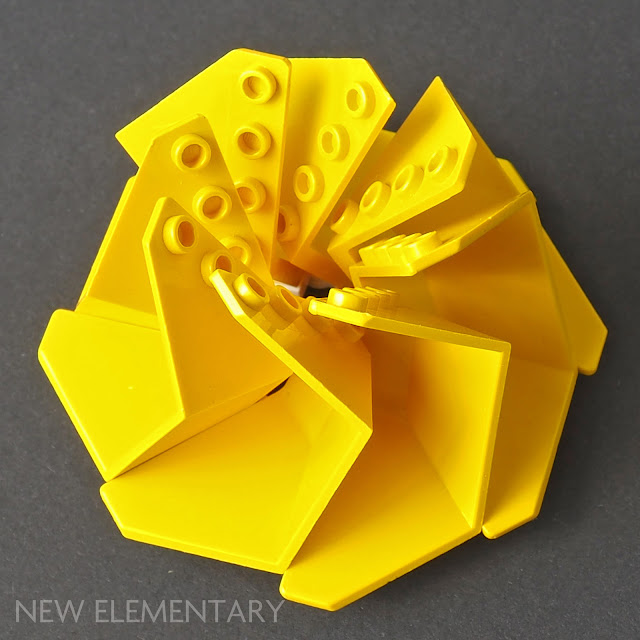 It might look messy, but I grant you, it’s perfectly geometrical object! And surprisingly complex too: 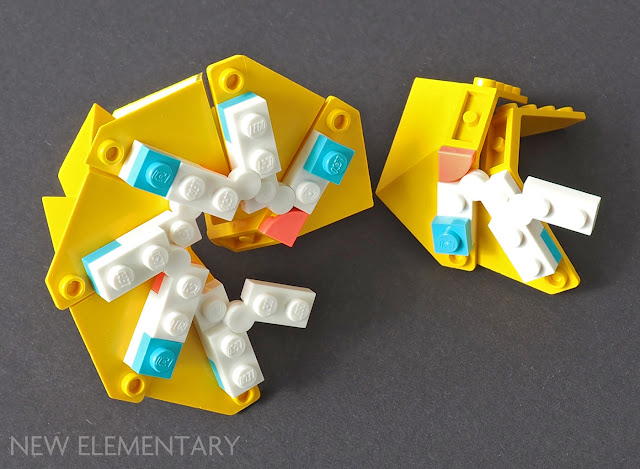 Back to the simpler ideas. This hexagon can be also made with the flat version, but looks more exciting with angled ones: 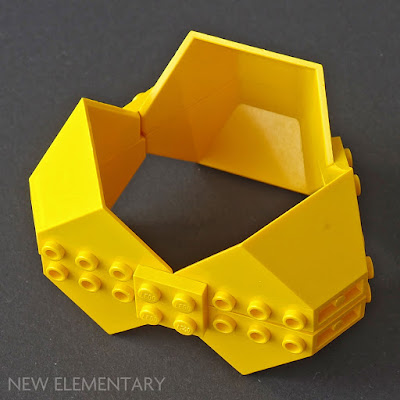 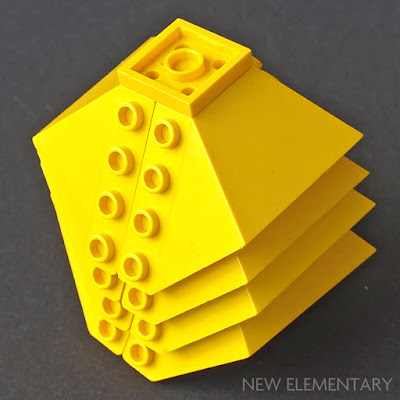 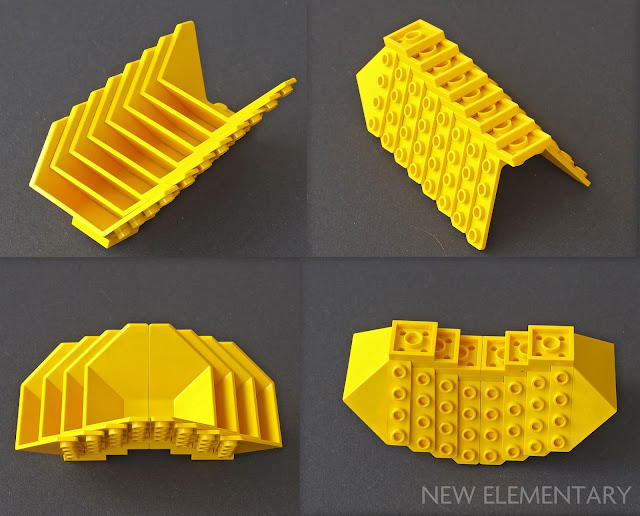 READ MORE: Eero now shows how he uses the Tipper End Family in his MOCs, both old and brand new

Products mentioned in this post were kindly supplied by the LEGO Group. All content represents the opinions of New Elementary authors and not the LEGO Group. All text and images are © New Elementary unless otherwise attributed.
Posted by: Admin Posted on 6/22/2020 04:51:00 pm
Email ThisBlogThis!Share to TwitterShare to FacebookShare to Pinterest
Labels: Old parts, Technique