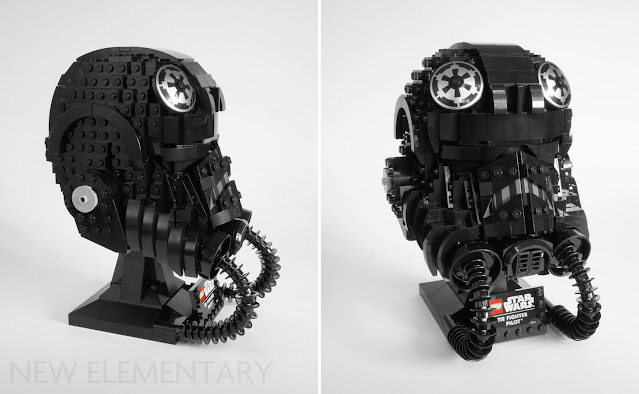 While there are no new moulds, there are some exclusive printed pieces. Weirdly there are also just two stickers. 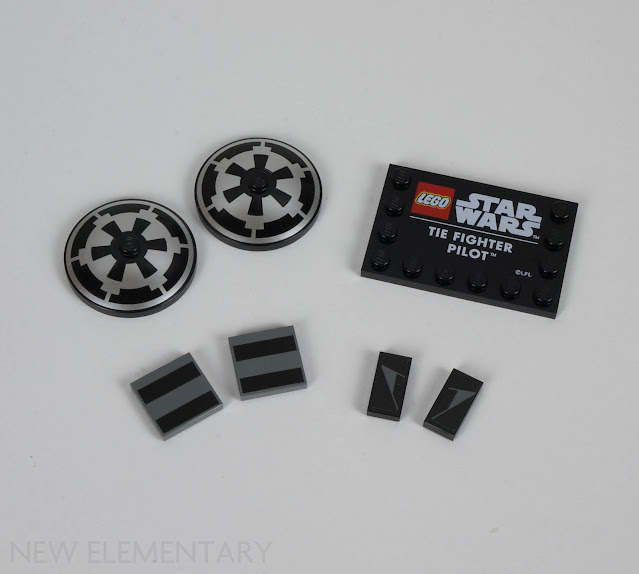 The striped squares are more interesting than you might first think. Rather than each tile having 4 equal stripes, they have 3.5 and so form 7 stripes across 4 modules when the two tiles are placed together. 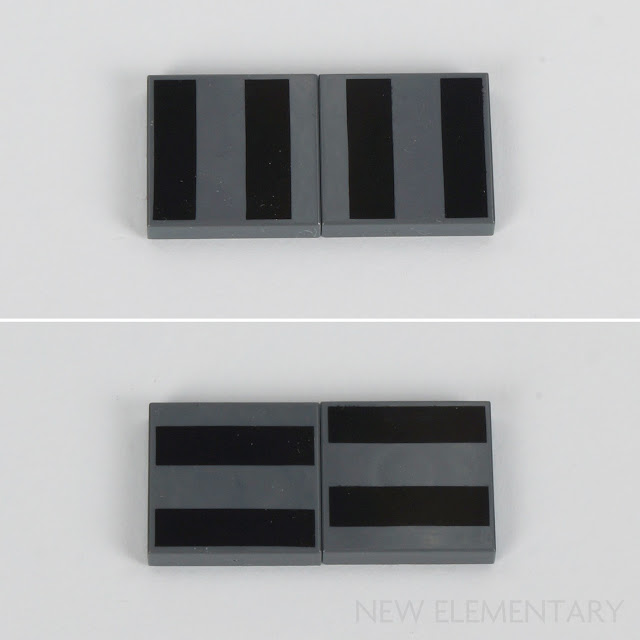 Although that makes them less flexible, I think it is much more interesting and I imagine the various patterns possible could be utilised in any number of ways in your MOCs, especially if you had these in bulk. 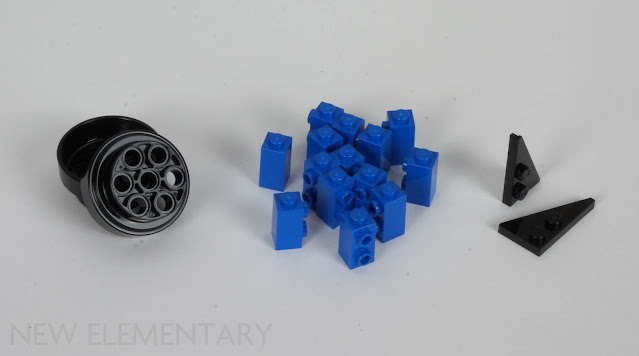 I always mistakenly think those new 2x4 wedge plates are actually 2x3... I only just realised why: 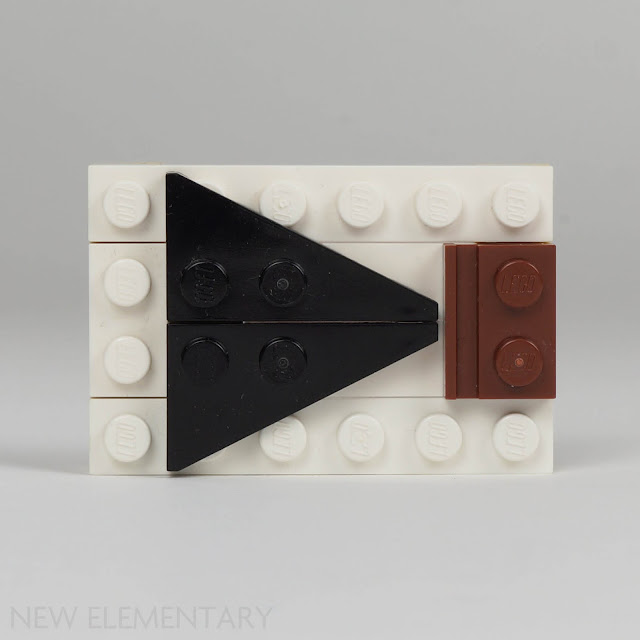 Their blunted points result in the element actually being just under 3.5 modules long! Worth remembering in case it becomes useful in a MOC somehow? 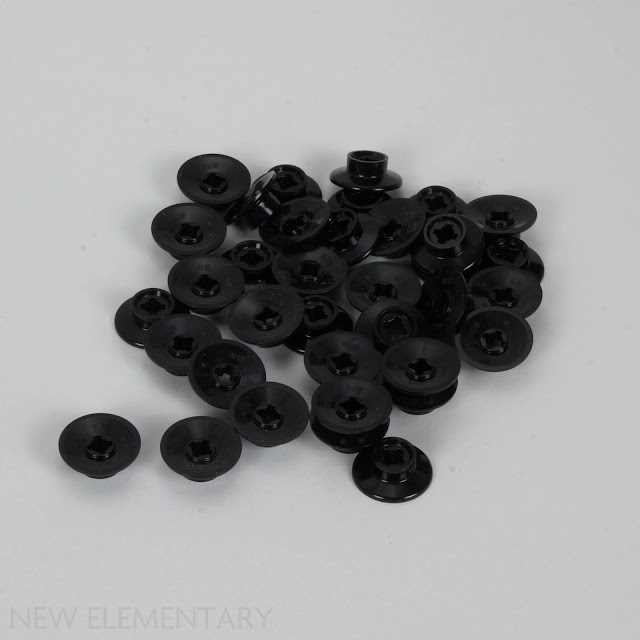 There are some high quantities of certain parts in the set, most prominently 36x Train Wheel Small, hole notched in Black (4227006 | 50254). Unless you’re a train person, that’s possibly not the element you’re needing most in your life – but if you are, this is the highest quantity to ever appear in a set. And as this set proves you can get inventive with them. 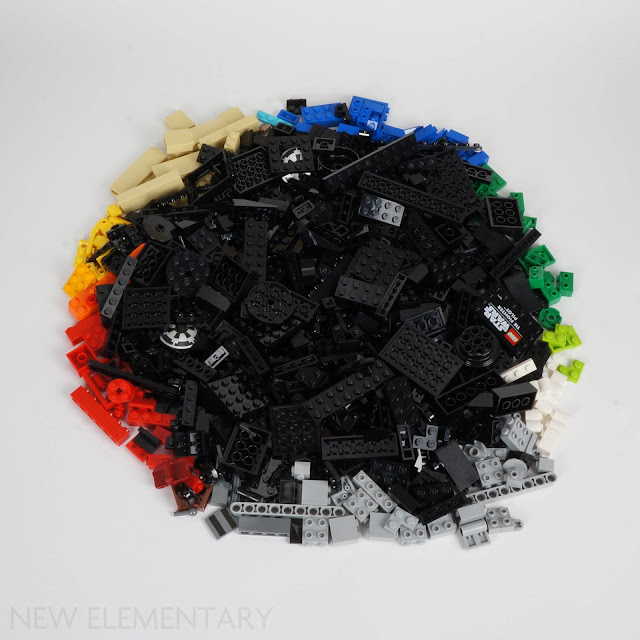 Obviously, black is far and away the most prevalent colour in the set, but others are hidden within.

AFOL Bruce Lowell came up with a technique for building a LEGO ball in 2003 that he named the Lowell Sphere. Bruce adapted his concept to create more complex rounded forms, like a doughnut for example, and you can perhaps think of these helmet sets as being a great-grandchild of this seminal SNOT technique in that studded elements are added sideways onto a central core to create a rounded effect. 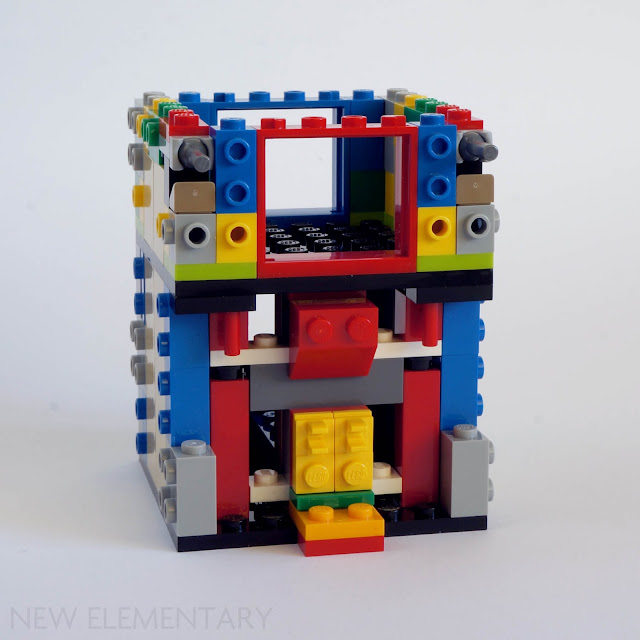 In the case of 75274 TIE Fighter Pilot, the studs-out core is a delightfully quirky affair with the usual riot of colours used. This is to assist the builder identify different parts more rapidly during construction and to provide basic orientation during later stages. 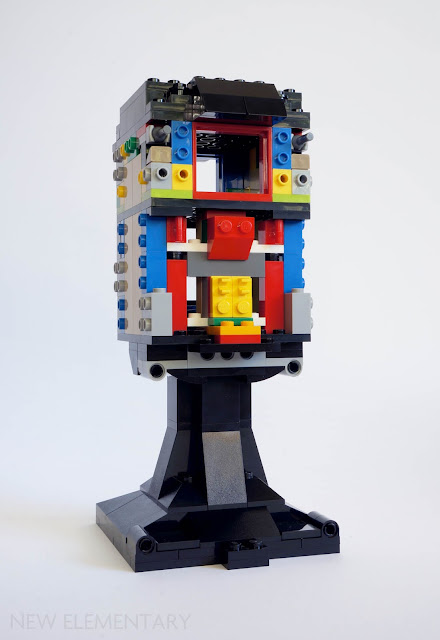 Once it is firmly connected by Technic beams to its stand, the SNOT cube resembles a work of modern art more than an elite intergalactic pilot. I’m intrigued by the use of windows rather than bricks or panels; are they stronger? Cheaper? 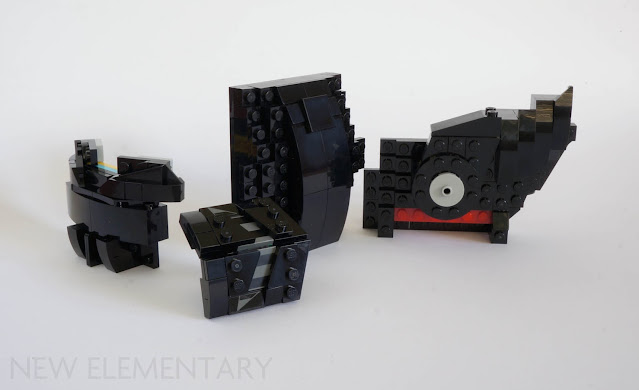 Next, the core is coated in an array of weird black shapes that are quite beautiful ‘tablescraps’ in their own right.

They feel almost random as you create them and yet you know they’re all going to match up together at the end to create neat forms, like some 3D jigsaw puzzle. That’s pretty much the joy of this set; imagining how it will all come together and anticipating the pleasure. It did make me wonder if it would be even more exciting for someone to build this model without being told what it is.

Out of interest, when deconstructing the model afterwards, I pulled one whole side off as a single piece. 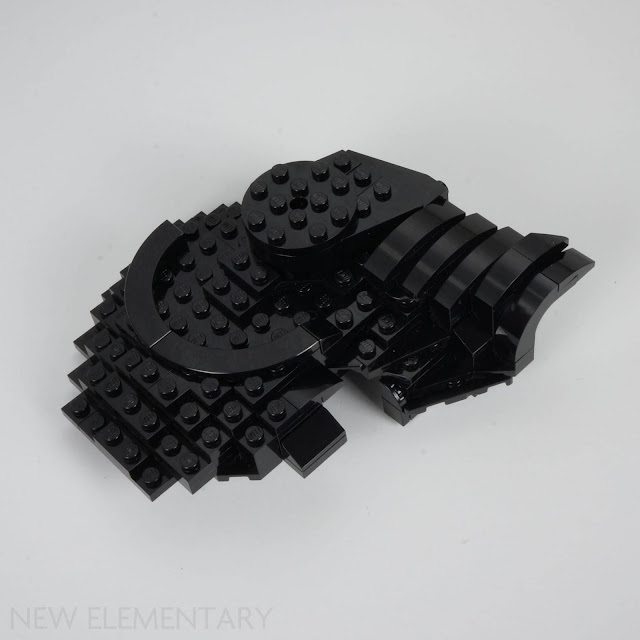 It reminds me of a secret base on an island! But black.


Not everything is connected via side studs; there are some other connectors involved in the core. 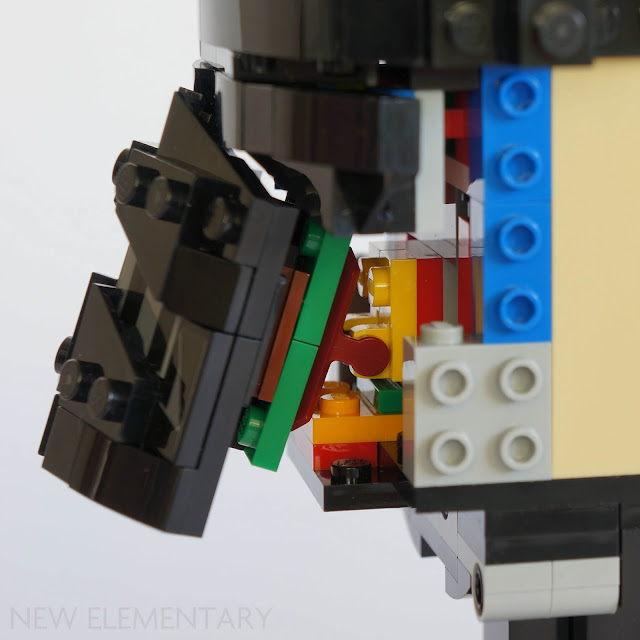 Two yellow clips grip a Minifig Shield Rectangular with 4 Studs in Dark Red (6220561 | 30166), one of the most interesting elements of recent years. It is being used so widely and surprisingly by LEGO designers. One useful aspect of its geometry is the thinness of the shield; great when placing things at an angle in a tight space, such as the helmet's mouthpiece. 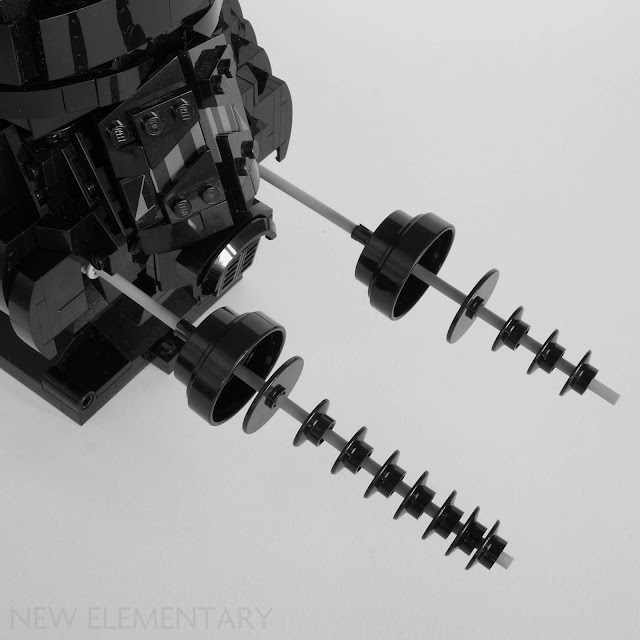 Some other connection points are Technic holes which are used for the flex tubing that forms the core of the pipes in the breathing apparatus. In a clever bit of parts usage, the effect of ribbed pipes is created by threading 18 of those black train wheels on each tube. 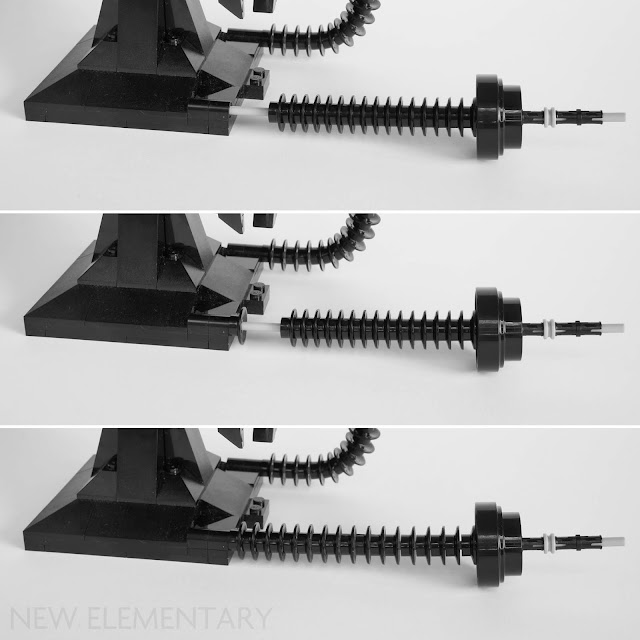 You have to get the spacing right as if they’re too close together, the tube won’t bend into a nice even curve. In perhaps what is a nod to the 18+ age mark, the instructions give no clue to this and I needed to figure it out myself.

Also in the core are a couple of ‘Mixel’ cup connectors with Bar 2L with Towball used to attach the two printed dishes. It is stunning how snugly the dishes nestle against the surrounding plates; once attached they don’t wiggle at all. 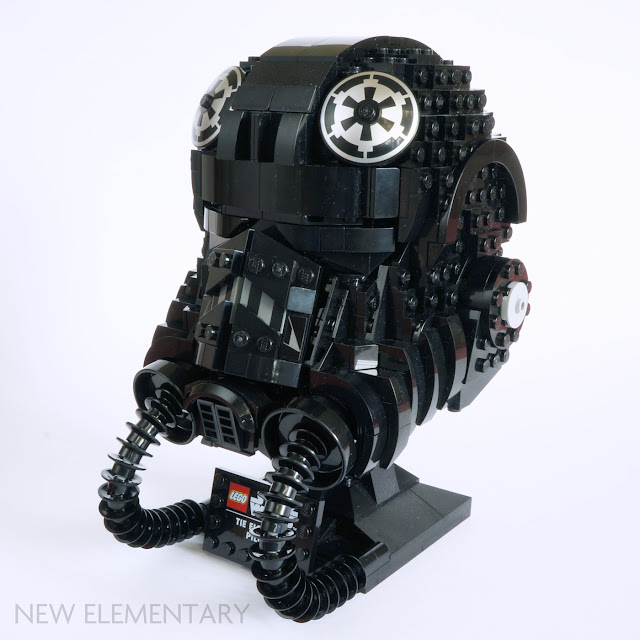 There’s a reason LEGO designers often throw what can look like incorrect colours into models; monotone is boring and without some contrast, displayed models fade into the background. This exception certainly proves the rule so I’d recommend placing your completed model against a light background, perhaps opposite a window where reflections will make its textures pop. Because although it is pretty much just black, there’s a lot of textural contrast going on here. 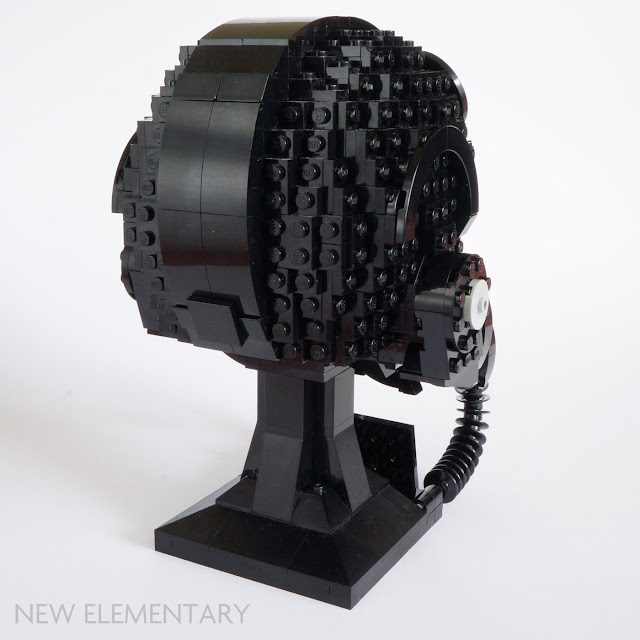 The sides and rear sport lots of exposed studs, giving that ‘LEGO DNA’ feel, but are broken up by the largely smooth band of slopes circling over the top, and in turn this contrasts with the detailed ‘face’.

The two rounded vents running along the jawline are distracting however, due to being fashioned from a staggered range of curved slopes whereas the originals are smooth wide tubes at an angle – terribly difficult to reproduce in LEGO form. This was obviously decided to be the best all-round solution and without me seeing the sketch models or attempting my own version, I can’t really judge if it was ‘correct’. But the jagged texture draws the eye, which is an unfortunate distraction from other detailed areas. 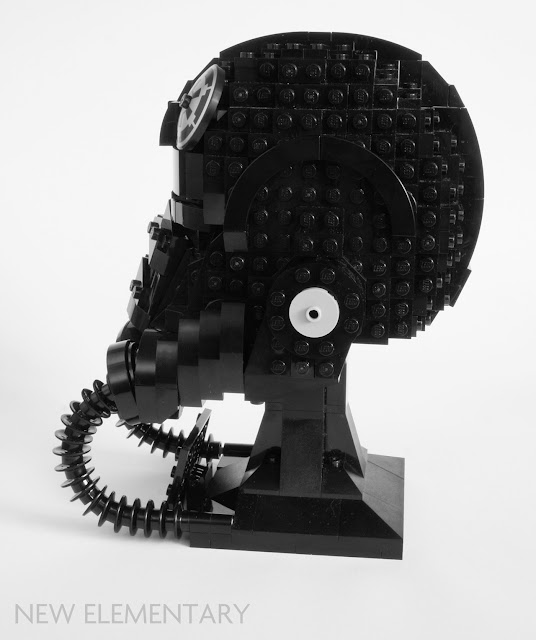 As for how ‘correct’ other proportions are, they look good to my eye – I find it hard to judge without an official reference to compare with, which no doubt the designers had to hand anyway. It definitely conveys that creepy ‘ball with snout’ gas mask shape of the original, while adding that unmistakable LEGO vibe.

The model is about 18cm (7”) tall; which is smaller than you might perhaps expect based upon the height of the box, which is twice as tall. This is a good size for display however which is, of course, its sole purpose as there are no play functions.

Creating all these small, seemingly random tablescrappy bits and bobs, assembling them on a weird cube and adding some train wheels might not be to everyone’s taste but I loved it. I’m not sure I’ll rush to build another... unless the rumours of a Darth Vader in 2021 are true.

I chose the TIE fighter out of personal preference for the design, but I suspect I am in the minority. The others make better display models due to their colouring.

As we all now know, 18+ sets aren’t marked as such because LEGO have increased the complexity accordingly – just look at 123 Sesame Street – but it would be an interesting experiment if they did. For example, in the case of this set, what if as much of the filler brick as possible were black? Ok, loads of frustrated people calling Customer Services probably. But you’d be left with an even better parts pack like a mini Architecture Studio, which all these newly-converted AFOLs could be encouraged to rebuild their own ideas with. I appreciate TLG are marketing these and other 18+ sets as collectible display pieces, but if the company is to continue to ‘embrace the brick’ at the core of their business, they may need to somehow address that tiresome criticism that LEGO sets are too specialised and only make one thing that never gets pulled apart.


All text and images are © New Elementary unless otherwise attributed.
Posted by: Admin Posted on 1/05/2021 11:24:00 am
Email ThisBlogThis!Share to TwitterShare to FacebookShare to Pinterest
Labels: Set review, Star Wars