Caz Mockett reviews LEGO® Monkie Kid set 80011 Red Son's Inferno Truck and designs some MOCs of her own using its parts. Buying this set? Consider using our affiliate links: UK LEGO Shop | USA LEGO Shop | Australia LEGO Shop, for other countries 'Change Region'. New Elementary may get a commission. The products in this article were provided for free by LEGO; the author's opinions are not biased by this. 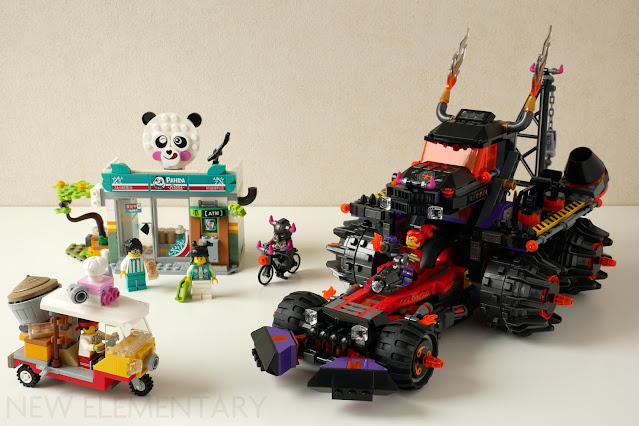 80011 Red Son's Inferno Truck sits at the £89.99 / $119.99 / 99.99€ price point in the first of the 2020 LEGO® Monkie Kid releases. It contains 1111 pieces which enables the builder to make the impressively menacing two-part Inferno Truck for Red Son and his henchmen, along with two wonderful side-builds: a tuk tuk for Monkie Kid who is working hard to deliver dumplings for Pigsy, and the Panda Convenience Store.

I confess I haven’t been watching the animated series, so I can’t comment on how close these builds are to anything which has been seen so far. I was however intrigued by the pieces in the set, so let’s take a closer look at those. 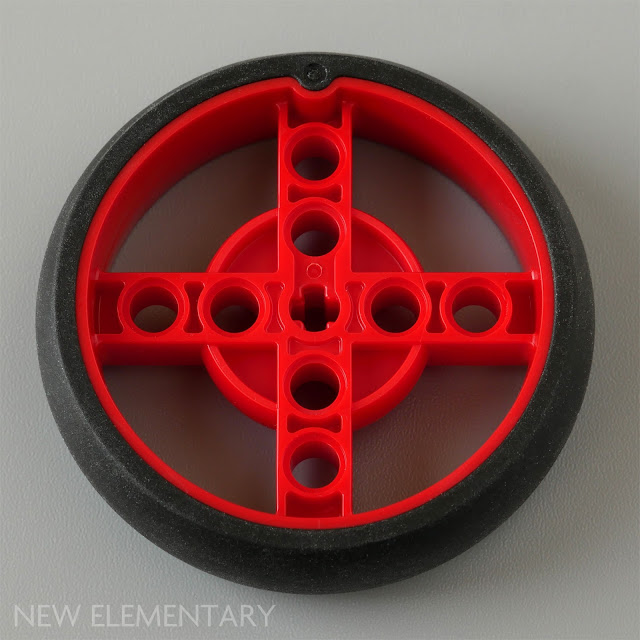 While there are no new moulds in this set, we are treated to a single exclusive new recolour: 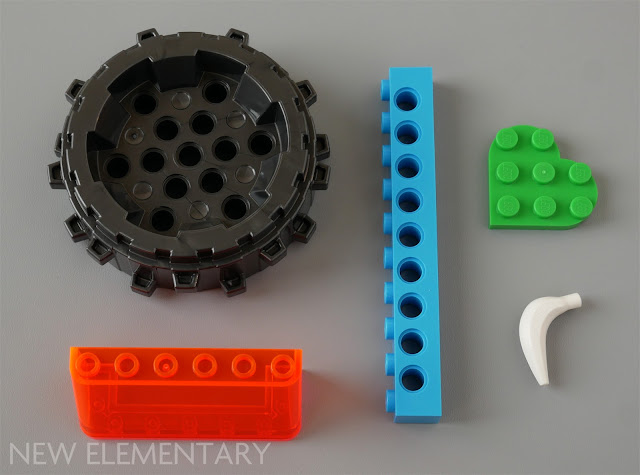 The following elements have only been seen in one other set: 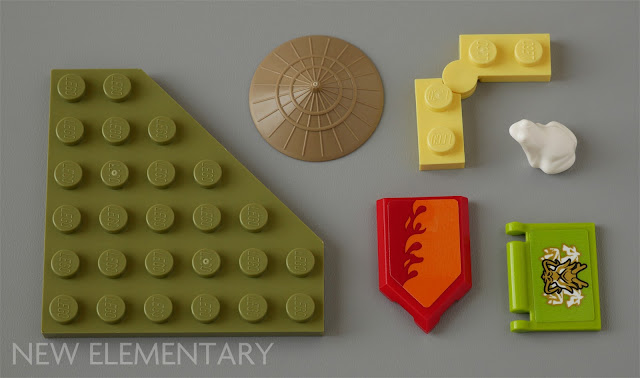 These have appeared in two additional releases: 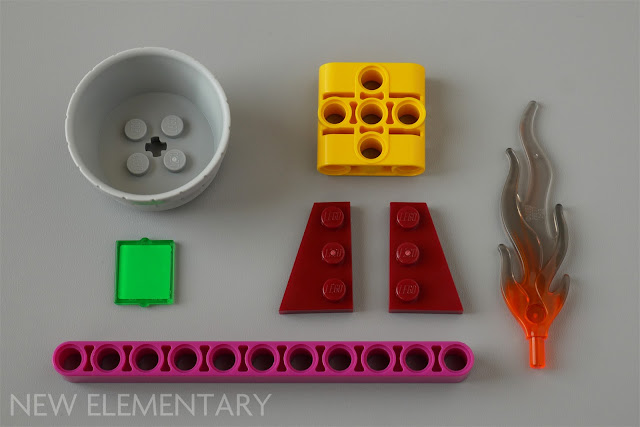 The following have been in three other sets: 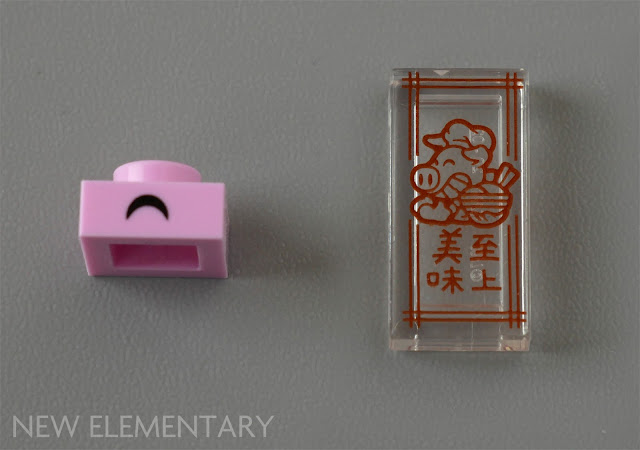 The set does not give us much in the way of unusual printed items, with most of its decorative flourishes being achieved in the form of stickers, but these two are relatively uncommon: 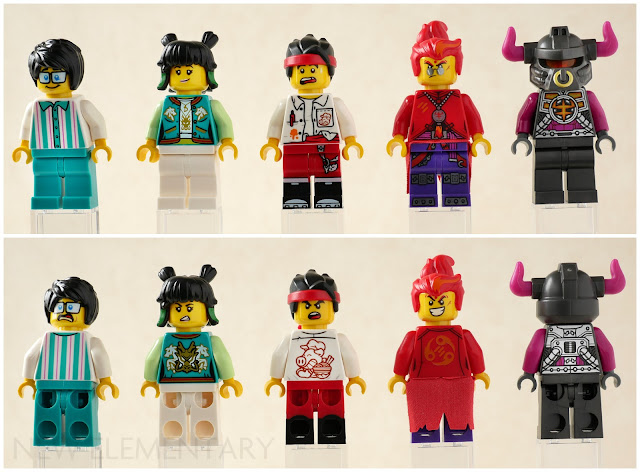 The set comes with seven minifigures. Shown here are Lee, Mei, Monkie Kid, Red Son and an Ironclad Henchman. Although the henchmen each have unique names (Snart, Grunt and Roar, according to the box) they are identical and have appeared in quite a few sets already. The others have some unique elements and double sided heads, with the alternative expressions shown in the bottom row.

Lee’s head is quite common, but the other elements he comprises are:

This is the first time we seeMei without her white and green armor. Her most interesting components are:

Monkie Kid’s hair, head and torso have only appeared additionally in Monkie Kid's Delivery Bike and Pigsy's Food Truck, but his legs have been in 12 Monkie Kid releases in total:

The villainous Red Son has only appeared in one other Monkie Kid release, the Flaming Foundry. He consists of: 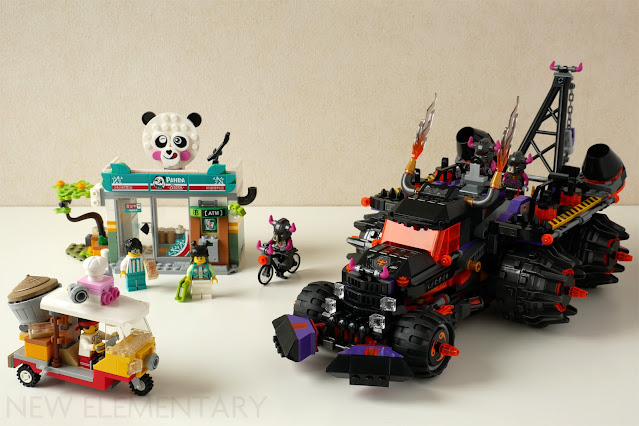 Two substantial instruction booklets guide you through the build. The first contains directions for bag one (tuk tuk and tree), bag two (the chassis for Red Son’s trike), bag 3 (wheels and armour for the trike) and bag four (the Panda store). Meanwhile, book two is dedicated to building the main Inferno Truck from the remaining 4 bags of parts. 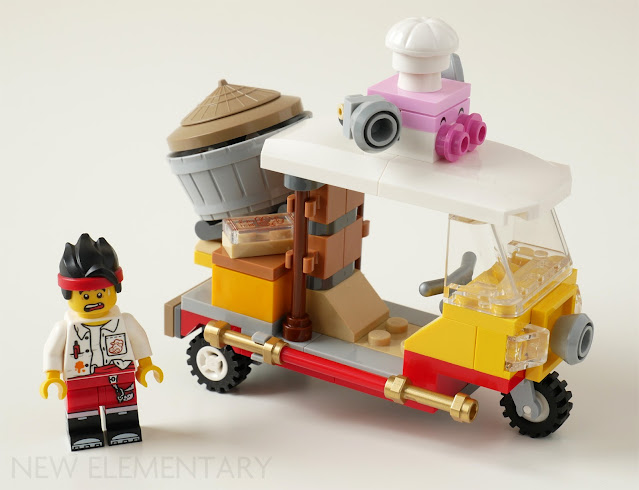 Although a fairly straightforward build, the tuk tuk turns out to be a great little vehicle with a huge carrying capacity at the rear - the barrel is chock full of delicious dumplings and buns from Pigsy’s fast food establishment. The 3D pig head sign on top presumably blares out aural advertisements as the tuk tuk plies its way around the streets. 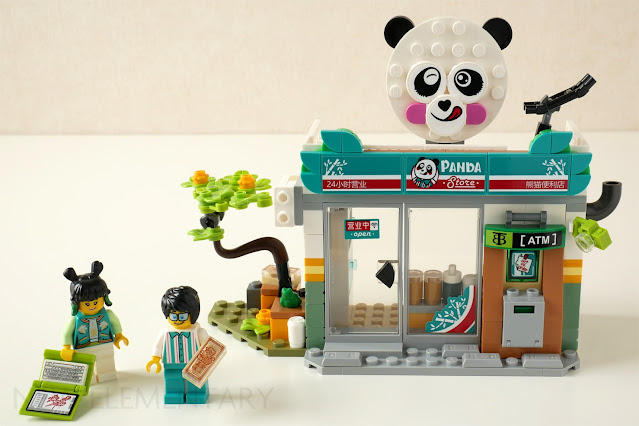 The Panda Store is another conventional build, but produces a nice little shop which would not look out of place in any LEGO city. It is staffed by Lee and is stocked with various beverages plus a fridge for your all-important white bananas (I have no idea!). The little tree at the side sits on a plate which has two bricks with integrated Technic pins, and can be attached to either side of the store. Mei has a massive laptop which the poor girl has to lug around - no wonder she needs to stop by the shop for refreshments! The store also houses an ATM with a nice little play feature which I will mention in due course.

With Red Son’s trike, the building techniques start to get a bit more advanced. The basic studs-up structure is adorned with various panels on each side which end up studs-out. Several are attached by means of bar and clip arrangements, while the more complicated detailing based around the horse hitching element (2397) is applied with one of the relatively new 2 x 4 bricks with 3 Technic axle holes (39789) mounted sideways onto the chassis with a couple of 2L axles. All three of the trike’s wheels feature rubber tyres which means it grips well even on smooth surfaces - although I noticed they do tend to pick up the dust quite easily. 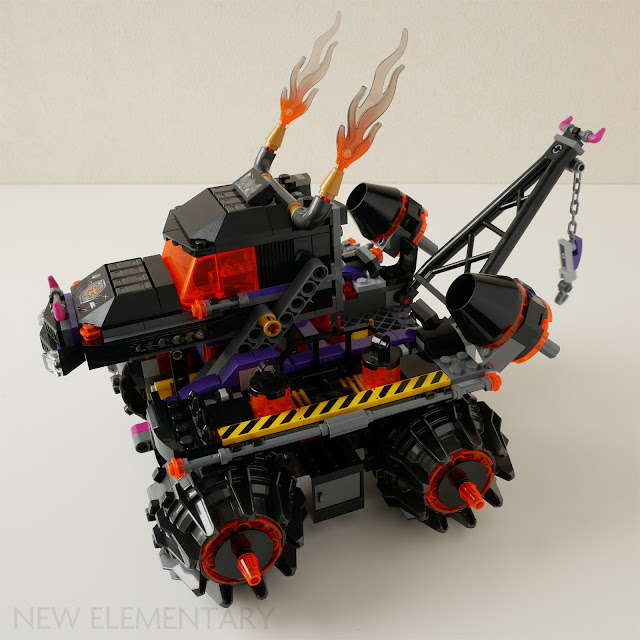 The Inferno Truck itself is a substantial build with almost as many steps as the rest of the set combined. When finished, it certainly looks like a very mean machine indeed, with two rear-mounted canons for defence, some chunky off road wheels and a formidable pair of exhaust pipes which belch huge flames into the sky! The wheels are plastic and thus might slip on smooth surfaces such as a tabletop, but will have plenty of grip on carpet due to their deep set treads.

The substructure is a mix of System bricks, a couple of long Technic bricks and - rather surprisingly - five Ornamental Asian Lattice fences buried deep within! These provide a lightweight but strong chassis on which the rest of the beastly machine rests. 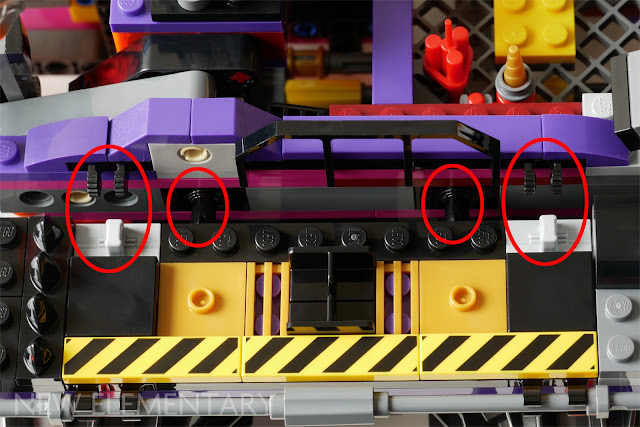 I was particularly impressed with the rigidity of the horizontal platforms above the wheels on each side. These are attached with a very clever combination of click hinges on top of the platforms and Technic pins slotting into inverted plates with Technic holes which are attached underneath - none of which was in the least bit obvious until the final step when they were brought together. They were so strong that trying to take the model apart again proved to be a bit of a challenge! 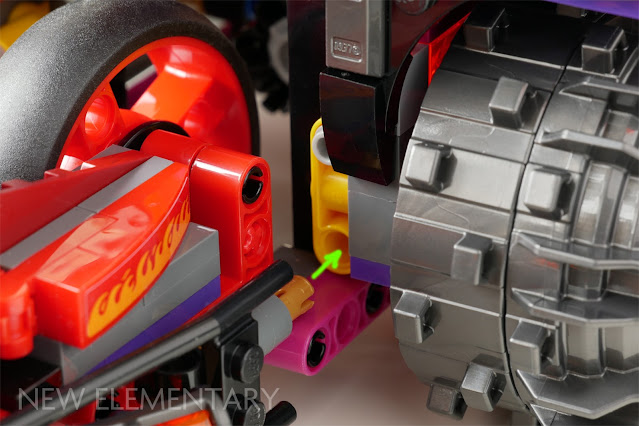 One part of the build I am less impressed with is the method of attaching Red Son’s trike to the Inferno Truck. There are two Technic pins on the rear of the trike which are meant to slot into a couple of the 3x3 Technic beam pieces inside the front wheels of the truck. Once they are in place, the trike/truck combo is very stable but getting them to lock into position was  really fiddly - having to line up both together without much access to the pins was difficult to achieve quickly, and I wonder how annoyed and frustrated young builders will be with this aspect. 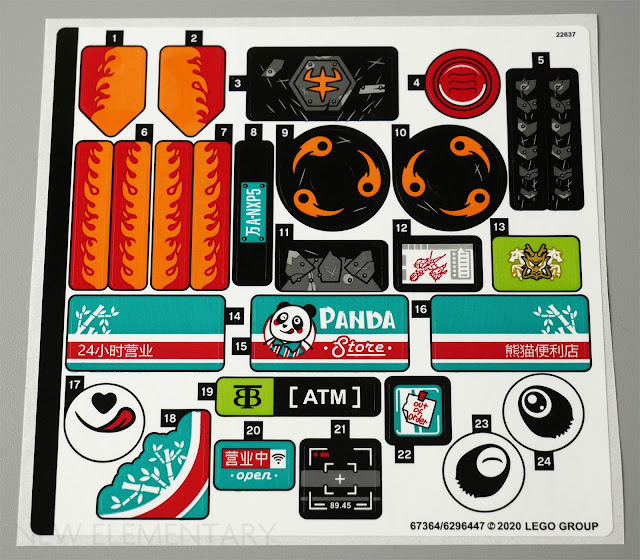 The set includes 27 stickers which I feel go a long way to adding character to the models with their distinctive decals, particularly the Panda Store and Red Son’s trike.

The Inferno Truck comes with several fun play features - the top of the cab can move from covering Red Son in his trike at the front, then up and backwards to cover one of the Ironclad Henchmen who is in the driving seat of the main truck. Once the cab is lifted out of the way, a plunger at the rear of the truck can push the trike forward so it can roar off independently, and you now have two vehicles to play with.

The cannons at the rear of the truck also have plungers to launch some incendiary bombs which are normally stored on the side platforms. The crane at the rear can be manoeuvred to pick them up for reuse if required - although this has to be left largely to the imagination as there is no winch mechanism on the chain and hook, and the crane jib cannot swivel, it just angles up or down. It can also latch onto the modified plate atop the ATM, allowing our crooks to drive off with their loot.

The ATM outside the convenience store can be blown out of the wall by turning the vent pipe in the adjacent wall, which in turn pushes the CCTV monitor inside the shop far enough to knock the ATM clear. So it seems that a robbery is the main aim of the nefarious gang in this set. I do feel sorry for one of the Henchmen who only has a bicycle to make his escape on. It’s not made clear if it is Snart, Grunt or Roar - but given the exertion which will be required, it’s probably Grunt! I’m sure there are numerous scenarios which young minds can conjure up with all these ingredients at hand.

When I first saw images of the set, I was immediately captivated by the side builds as much as the main vehicle. In particular, I felt that the Panda Store could be integrated into the custom Ninjago-inspired District in my city.

So the first thing I did for a MOC was to expand the shop by 2 modules in width and depth, and add it as the upper level of a new Ninjago block, sitting above an expanded Bike Shop made with pieces from one of my previous review sets, 60306 Shopping Street. 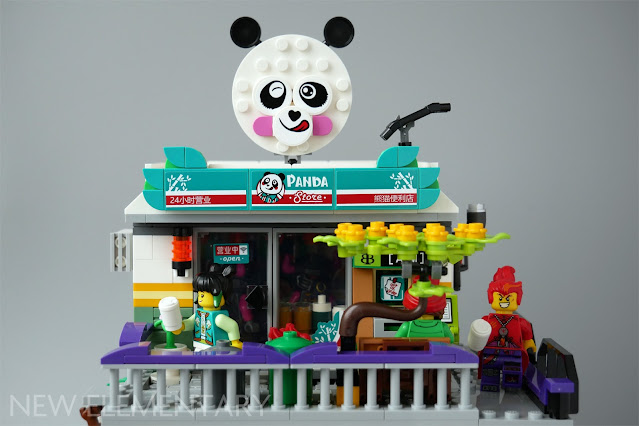 It looks like Red Son has given up his criminal lifestyle and is just in town on the lookout for a decent cup of coffee. I made the Panda sign on the roof swivel so that it can be seen from all angles. 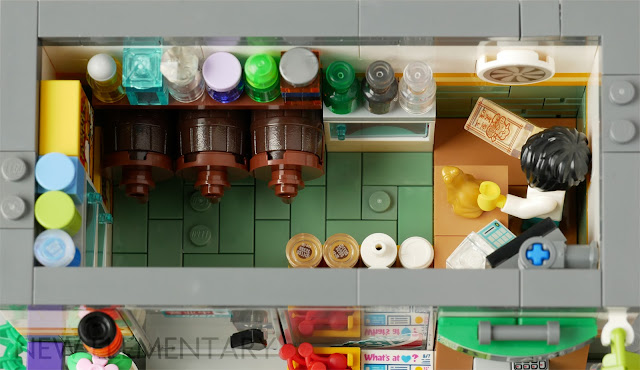 The shop’s interior has been expanded and fully stocked. It now houses shelves with cereal and spirits, an extra fridge contains some sausages and the three barrels along the back wall allow patrons to take away some cask ales if they wish. I’m sure the new block will integrate very well with the rest of my Ninjago District. 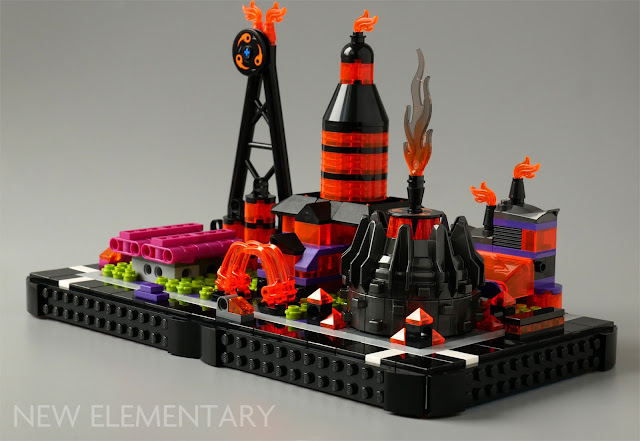 While the Panda store expansion was really just an enlargement of what was already in the set, I felt some of the other components could be used in innovative ways in a new Micropolis build. I love making smaller scale models, especially due to the fact that elements which have one function in minifigure scale can be made to represent vastly different things in microscale. The transparent neon orange, black and purple colour scheme suggested something menacing. With the addition of a few other pieces from my collection, Inferno Plaza was born. 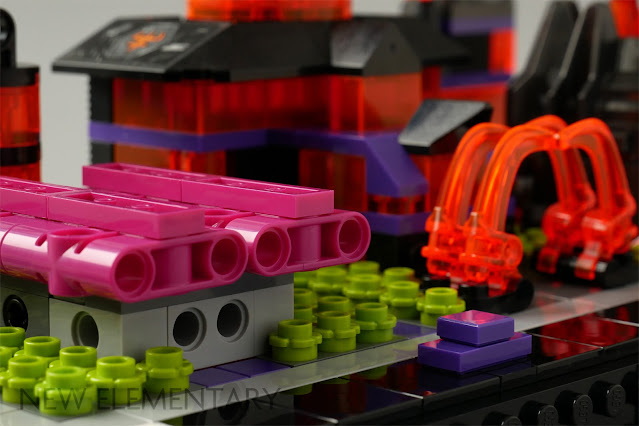 I’m not too sure what the function of each of these buildings is supposed to be, but I think it will be right at home in an industrial area.

Red Son’s Inferno Truck gives Monkie Kid fans in the 9+ age range an interesting build experience which results in some fun vehicles and engaging play features. I very much enjoyed the quality of the side builds in this set, which can sometimes seem like afterthoughts to the main model, but here they very much pass with their own merit. In fact, I think that both the shop and tuk tuk would make a great standalone release, and would be just as popular with LEGO City builders as well as those who are fans of the Monkie Kid theme.

The price point offers decent value for money at 8.1p / 10.8c / 9.0c and the resulting models feel substantial in size and complexity once they are put together. The two separate instruction booklets enable the models to be built in parallel which is a nice way of getting more than one adult or child involved simultaneously. If you're going to buy it, consider using our affiliate links: UK LEGO Shop | USA LEGO Shop | Australia LEGO Shop, for other countries 'Change Region'. New Elementary may get a commission.