2019 Parts Fest #2: Eero Okkonen's Doctor Who and the Frost Serpent

Finnish builder Eero Okkonen returns to our Parts Festival today with another two varied creations using new LEGO® parts. You can see his earlier two builds here and follow his builds on his blog.

Sometimes the bulk of a creation stays almost the same while the concept changes completely. 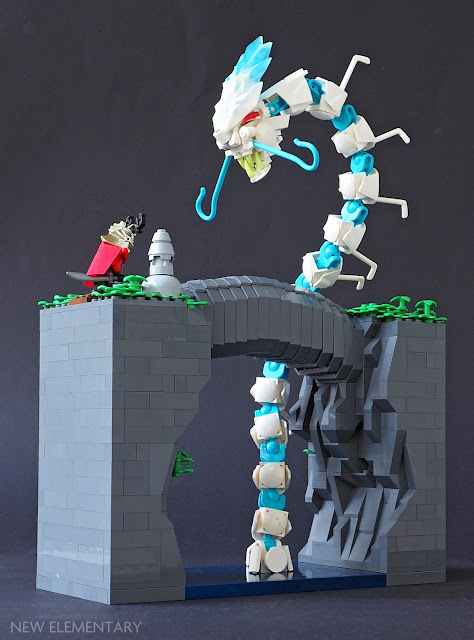 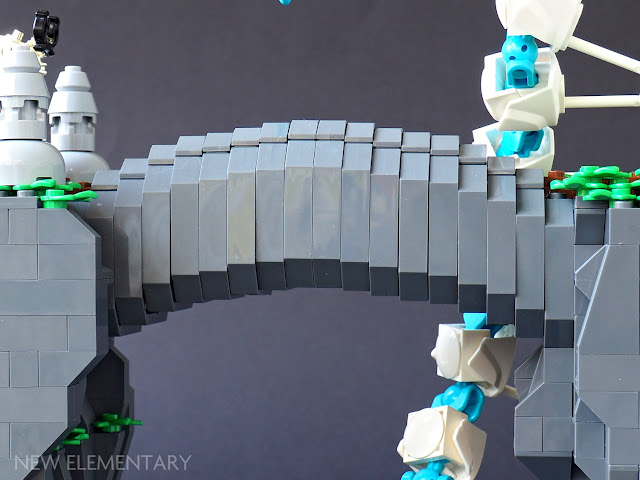 After considering a few different options, I ended up making a SNOT water base - I feel I made lot of those around nine years ago – and somewhat high cliffs. I also build an actual, solid bridge inside the panels, with different surfaces holding the panels on different heights: studs, tiles, tiles on sides… The steps are bigger near the ends and around 1/3 a plate near the middle. 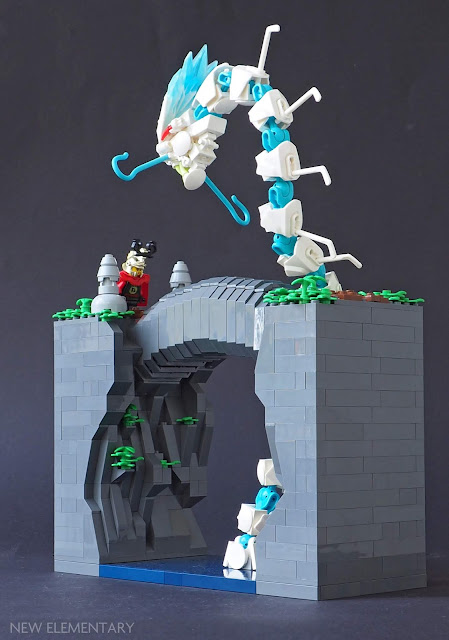 After making the water, the cliffs and the bridge I had to define the scene. This turned out to be harder than expected. I ended up building a mythological dragon serpent and giving the scene an Asian feel. It is a mix of CCBS and SYSTEM parts with the defining quality of the shepherd staffs - Tool, No. 10 in Medium Azure ( 49492 | 6256157 ). I hadn’t used them yet, and a dragon moustache had been one of my first ideas.

I had plenty of 5-long CCBS bones in Medium Azure and small shell pieces in White, so made the most of the serpent. Its structure is very homogenous: there are no thicker or thinner sections. It feels a bit unrealistic in a way, but I like the way that it suggests that there’s no clue how long it actually is; are we meeting only the tip of the iceberg? Mini Figure Hocky Stick in White ( 64000 | 6276148) were added on the back as they reminded me of fish bones. 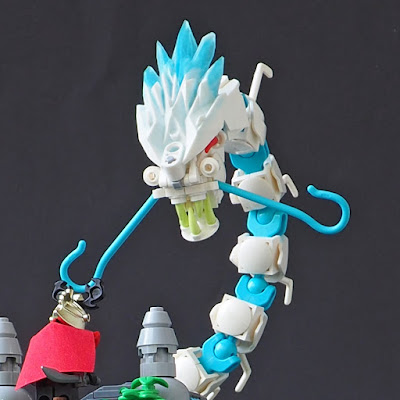 Building the head of the dragon was a nice challenge. I wanted it to be bit like the gale serpent’s head from Gale Serpent Arises (a build I created back in 2016) but not a copy. The mouth is similar with its boat stud lower jaw, and bright green teeth worked nicely with the colours. Big nostrils and a small, angled connection to the moustache were essential. As a defining part I used ice armour piece from Bionicle set Strakk (Skal 3 5X11X3 4537512|64273).  I posed the serpent so that it circles around the bridge, guarding the pass. It’s not openly hostile towards the travelling warrior, who bows respectfully between the shrine posts, while still holding her sword. There’s a tension between the characters, and that was something I quite couldn’t achieve with only the figs.

With the new scene, the landscape went through couple of changes. I built two shrines that use another seed part, 3x3 domes (Sphere 3X3X11/3, W/ Knob in Medium Stone Grey/ Light Bluish Gray – 49308 | 6263183), and added more foliage to define the path leading to the bridge. I ended up making the bridge smooth with cheese slopes and 1x2 tiles. I was unsure about it at first, as I wanted the bridge to feel like it would be made of one material – not build, just formed from the cliff itself. In the end, the tiles surface captures that better. It also made the shape rounder. The flat area on it, the pathway, is also two studs wide, so it’s very intimidating bridge to cross, dragon or not. Don’t slip!

Building my own version of the Tardis console room was actually my first clear idea for the Parts Festival. I’m a fan of Doctor Who (though, to be honest, I’ve only seen handful of classic episodes) and those various silver mechanical bits (Mini Accessory, No. 10 – 40598 | 6266155, and Mini Accessory, No. 11 – 50018 | 6266977), along with the various round pieces made me think of Tardis interiors. 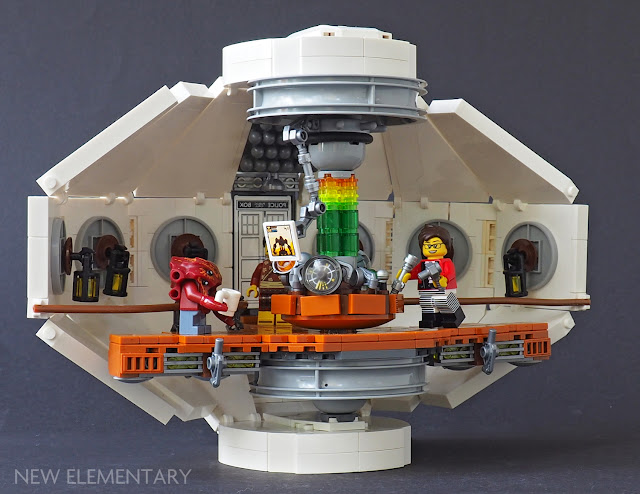 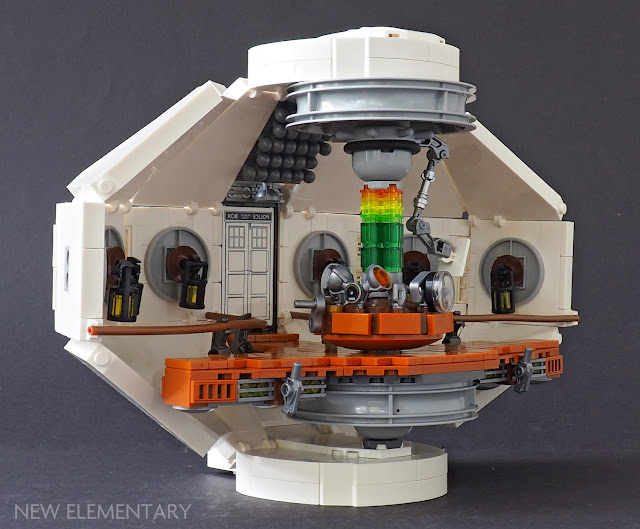 Most of the piece uses defined themselves during the building process itself but I hadn’t given much thought to the walls. I wanted it to be a somewhat round space. I think that was inspired by the 9th, 10th and 11th Doctor’s Tardises – Matt Smith’s first console room is my favourite – but I didn't check any inspirational material during the process. 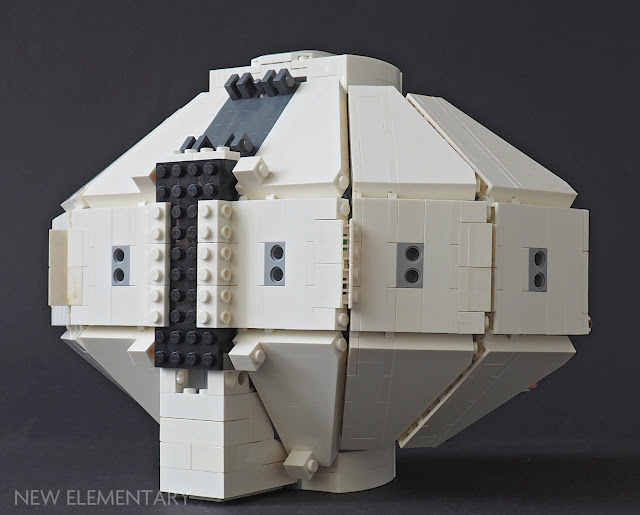 I first though about using some wedge plates for the shape, but then I realized that those 1x8x3 white slope pieces (Roof Tile 1x8x3 Deg 25 No 1 in White – 49618 | 6262530) would be perfect. Together with plate swivel hinges and brick hinges they formed a half of an UFO-like structure. It also reminds of Finnish architect Matti Suuronen’s plastic Futuro home, designed in 1968. 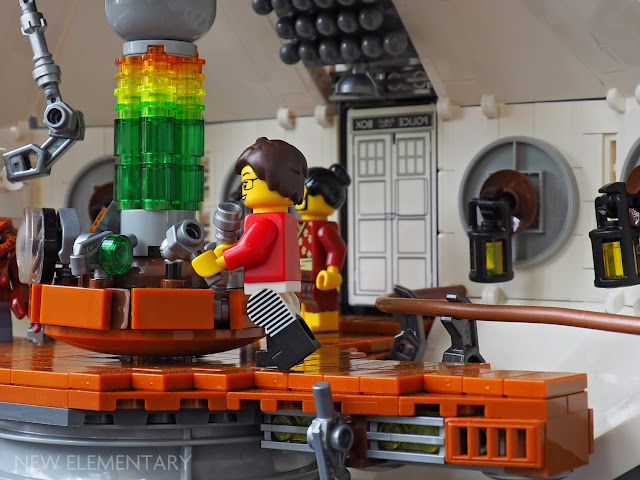 In the center of the wall, an interior police box door print from the official Tardis LEGO set marks the main doors. Above it there is an interesting pattern made on 1x2 plates with ball joint – nothing to do with seed parts, but Tardis-esque anyway. 4x4 circle pieces (Plate 4X4, Circle, W/ 2 Knobs – 32627 | 6250188) have been used on the walls as the console room tends to have round things along the walls. 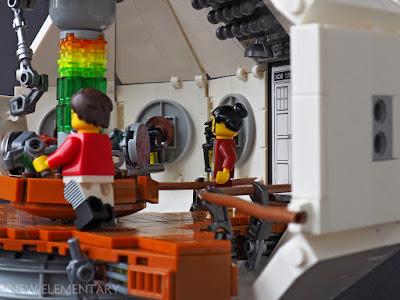 As the white structure felt very clean, and even cold, I wanted to add some warmth and cosiness with colours and various bric-a-brac; this refers to 11th’s Tardis. Dark Orange tiles were used on the walkways to bring warm feel of varnished wood.

The copper rails – I think the odd bends give them authenticity – are connected using Batman greeble bag gun pieces.

The console is the main course here, and the funniest one to build. It forms a pillar that runs through the build, supporting the hinged structure. It is quite sturdy, even though it leans on some slightly weak connections. 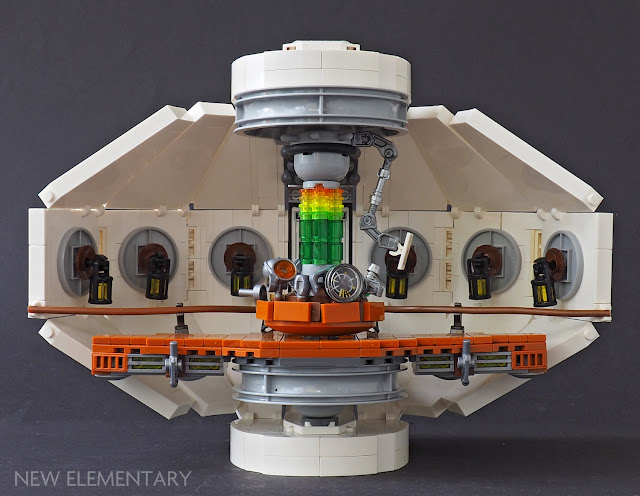 On the structure, there are two Fat Boy wheels, two 3x3 domes and two ship’s wheels (Fabuland Ship Wheel in Medium Stone Grey – 52395 | 6278555 ) – the another one is hidden inside the console itself, keeping it together. Brown 1x1 bricks with studs on all sides connect to each bar, and various apparatus are connected to them. It uses a wealth of Batman greeble bag parts, along with some other interesting parts. There should be things on a Tardis console that spin around and flash and go “ping”… and a big lever to pull. 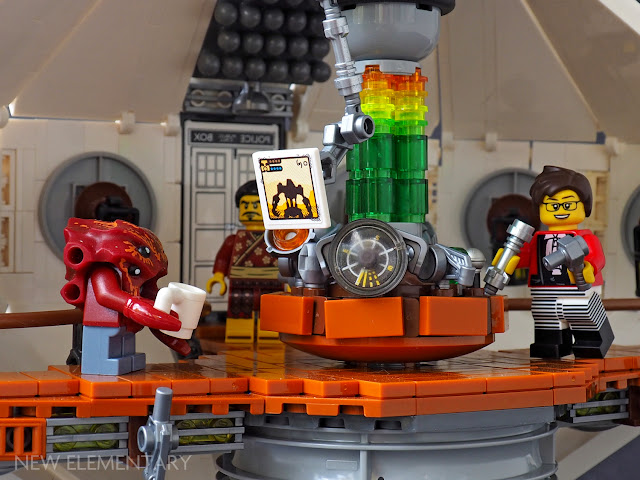 There’s a little Bionicle reference on it, as the view screen hanging from the above has a sticker representing unreleased Bionicle game from 2001; it’s from the Hidden Side school bus. Batman bits are used on the screen’s arm, and another one of those pieces represents my Doctor’s sonic screwdriver, too. 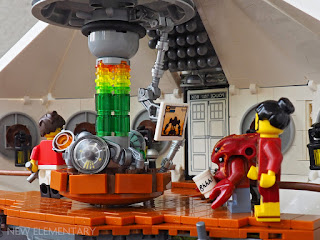 I also designed a new Doctor and her companions for this MOC. The Doctor – let’s call her Nth Doctor – has an attire that combines new and old styles, with classic ascot and cool striped trousers.

The companions represent those I’d like to see in the show: a non-human companion (I’ve been wanting to use Atlantis crab-person for some time) and a non-present-day human companion (who is sort of a Samurai fellow). They also represent Tardis’s ability to travel anywhere in time and space.

Products mentioned in this post were kindly supplied by the LEGO Group. All content represents the opinions of New Elementary authors and not the LEGO Group. All text and images are © New Elementary unless otherwise attributed.
Posted by: Admin Posted on 11/19/2019 07:00:00 am
Email ThisBlogThis!Share to TwitterShare to FacebookShare to Pinterest
Labels: CCBS, Parts Festivals, Space, Technique