Returning now to our Parts Festival, the next participant is Finnish builder Eero Okkonen. Eero is best known for his character builds and he is currently displaying some of his work within the Masterpiece Gallery at LEGO® House. Eero took part in the infamous Iron Builder with Duplo Grass as the seed part, so this Parts Festival should be a breeze by comparison! You can read more about Eero and his builds on his blog.

Herald of the Carp Speeder

I like bright colours, so I find some of the more vibrant seed parts the most inspiring. Among the seed parts there was a bag of small sea creatures from Friends marine-themed line. 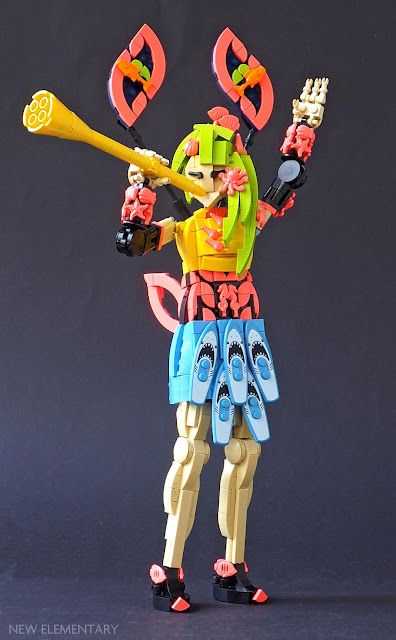 Accessories, Marine Life, No. 1 in Vibrant Coral (49595 | 6262127) includes two clams, fish, starfish, octopus, seahorse and sort of pond snail (or a sea mollusc looking like a unicorn horn). They’re the only seed parts used in this build, but hey, that’s seven parts in total.

The MOC is a character build, as that’s my speciality. It was a casual, fast an enjoyable process, relying mostly on familiar themes and techniques, but also embarking some new challenges. I have this ongoing series of large-scale speeder bikes and their drivers. I’m planning to make some sort of compilation, featuring racing track things like supporters for competitors, hot dog sellers and things like this. So my existing builds needed additional character inspired by them in-universe. 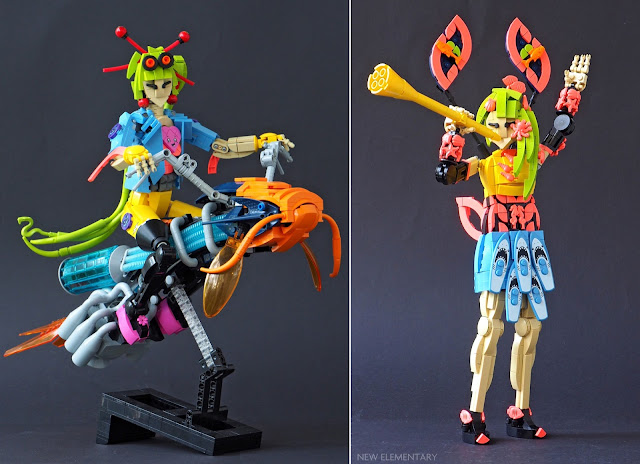 So this new character is the supporter of my earlier Kiirus Ögonblick and her Carp Speeder, shown above, and thus the aquatic animal concept was fitting. The new character got a similar lime green hair, but otherwise uses Kiirus Ögonblick’s colour scheme mixed in a new way: yellow tank top (yellow trousers on original), black and coral wide belt, sleeves and shoes (black stockings and coral shirt) and medium blue skirt (medium blue jacket). 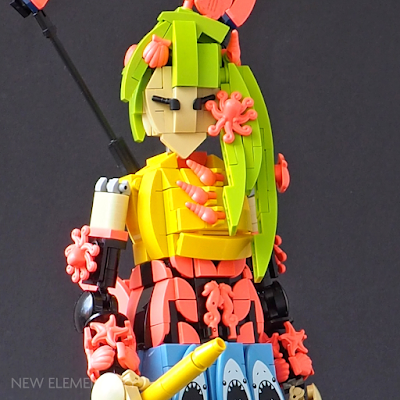 Fish creatures are used throughout the build, mostly as decoration, but also as toggle buttons on the shirt.

I especially like the fish in the shoes, hiding the light bley ball socket, and clams and starfish composing the wrist bands.

The skirt with its hungry shark prints (surfboards from AFOL Day’s PaB) enhance the aquatic theme. In a way, the seed parts are “slapped on” the build, but given the promotional nature of the character, it feels distinctive to the concept. Also, it would have been almost impossible to use those animals in a structural way… But I’m looking forward seeing what others came up with using them!

Unrelated to the seed parts, the main challenge here was the legs with a skirt (again). Brick-built skirts and dresses are lot thicker than actual textile ones, so it’s hard to fit legs in there! This is an evergreen issue in my builds. 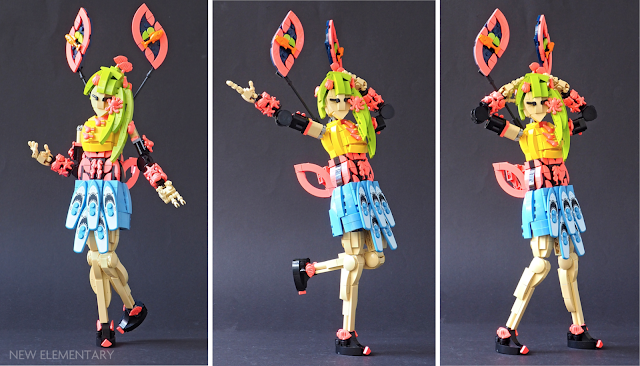 The design here is almost realistic. The hip joint is pretty much on realistic height, but the joints are too close together. This results the legs looking a bit awkward in some angles and poses but alright in others. 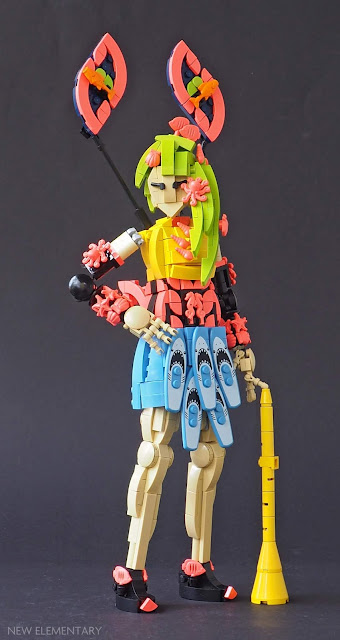 Another interesting thing was the accessories. What sort of things would sci-fi speeder bike race fan carry? My partner suggested cheerleader pom-poms. It was a nice idea, but I preserved it for another build (I’ve got three finished speeders.)

Instead I made couple of flags, featuring simplified image of the carp speeder and its rider. In addition, I gave the herald a big yellow vuvuzela – a loud menace in all competitive sessions throughout the future.

The concept behind this MOC originated during an unessential lecture about geo-critical analysis of literature. 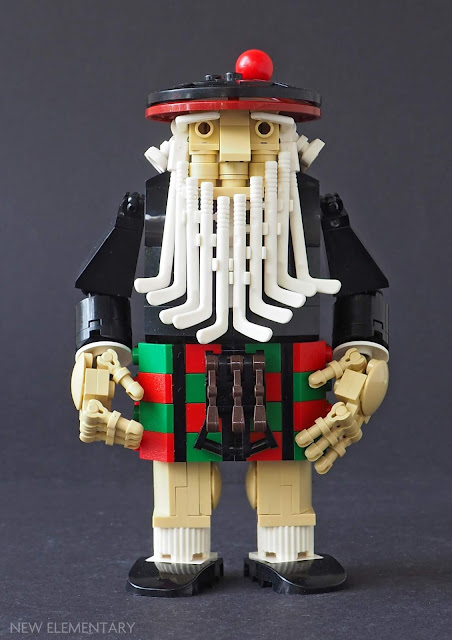 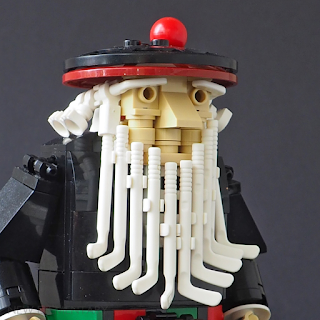 I was doodling some seed part doodles on the side of my notes and came up with this idea of connecting those hockey sticks (Mini Figure Hocky Stick in White – 64000 | 6276148) side by side, next to each other by connecting them all to a single bar with battle droid arms.

I also used another pair of hockey sticks as the eyebrows. Having eyebrows partially in front of the eye socket – a headlight brick – gives the build emotion. Those sticks can be adjusted into an angry position, but this slightly worried looks fitted the character better. The eyebrow sticks continue quite far back but they fade into his hair.

The head defined what kind of character it would be as the WIP looked like Balin the dwarf from the Hobbit movies.

A bust of Balin, back in 2012, was my first character build in this scale, so it’s very important subject for me, having played such critical role in my development towards SYSTEM character builds. This hockey stick WIP looked more like Balin than my first Balin, too, with its lack of moustache and white beard bending in the ends. 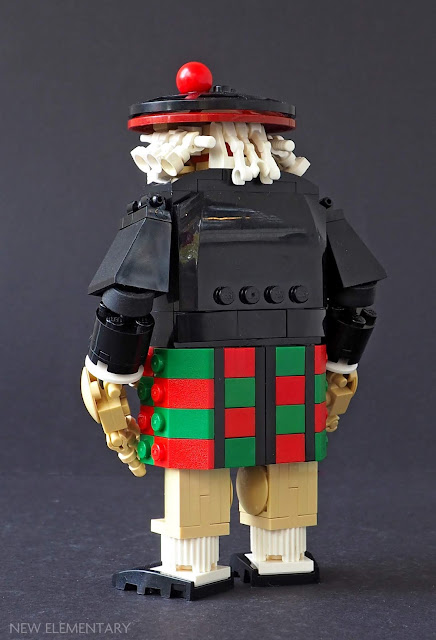 I made some background work on traditional Highlands attire. I was aiming for a small, somewhat light-hearted figure. I made the bonnet – it has a pattern when seen from above, as there’s black webbed 6x6 dish above a regular dark red one. It’s not perfect, but it was an interesting idea and I wanted to use it.

The jacket ended up being black and very simple, not draw attention away from the beard that would cover most of it anyway. There were also some lot more complicated kilt designs, but I ended up with a very simple one. 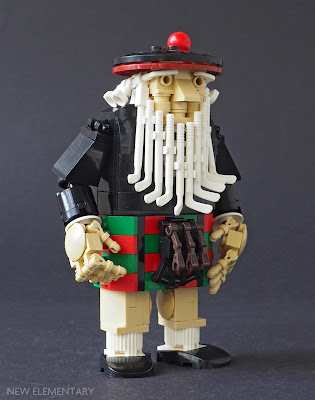 To keep the scale logical, I had to have the leg elements in small space – bit of a bare leg, some stocking and pair of black shoes. They look odd in some angles but use some parts that still feel new to me; Tile 2X2 With Vertical 1X2 Plate (41682). Looking at it now, I feel I should have just added a 1x2 TECHNIC brick in there instead, as the 2x2 tile portion sticks out too much.

In the arms, there’s also some experimentation. Straight arms would have looked awkward, yet it was hard to include proper joint in this scale. The compromise uses sausages to create a slight curve in the arm; a tire hides most of the gap, at least in theory.

Products mentioned in this post were kindly supplied by the LEGO Group. All content represents the opinions of New Elementary authors and not the LEGO Group. All text and images are © New Elementary unless otherwise attributed.
Posted by: Elspeth De Montes Posted on 11/10/2019 11:52:00 am
Email ThisBlogThis!Share to TwitterShare to FacebookShare to Pinterest
Labels: Parts Festivals, Technique