Now that we have shown you the new LEGO® elements that we sent our latest Parts Festival participants, it is time to start taking a look at the results of their hard work. We invite inspiring builders to explore new elements for inspiring ideas, connections and techniques. We start with a favourite builder of mine who is taking part in our Parts Festival for the first time. Andreas Lenander is from Sweden and, despite being a busy medical doctor with three children, he has blown us away with his builds for this parts fest and the speed at which he delivered them - the first pictures appeared only two days after receiving the parts!

As a builder that has a tendency to jump between themes and challenges, I was very pleased when asked to make some MOCs using some of the newer LEGO pieces. I received the parts during the fan weekend in Skaerbaek and spent most of the (long) drive home thinking about what I could build with them. When going through the parts there were some that I instantly loved (the greebling pieces from Batman in particular) and others that I was less blown away with... yes, seashells, so many seashells… haha!

I decided to try and tackle the biggest piece first, which is the new rim from the Harley-Davidson Fat Boy set (Motorcycle Rim Ø 75 Solid in Medium Stone Grey – 6268590|46334). 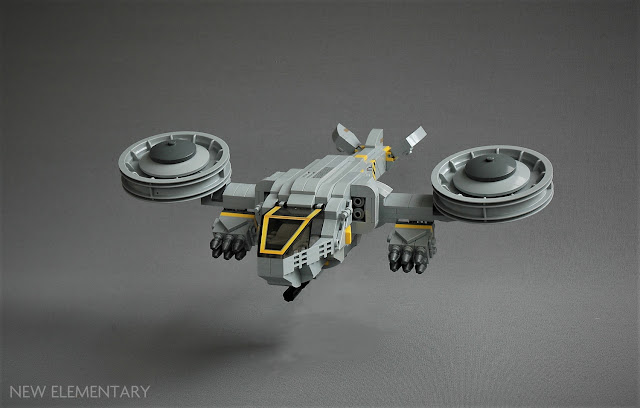 After looking at it for a while I realized it sort of resembled the rotors on the helicopters from the movie Avatar, so I figured I would go for something like that. Since the piece comes in LBG I decided to continue with that colour through the whole build and then added some yellow pieces for contrast. I usually stay away from conventional military builds for some reason but decided that since it’s sci-fi, I could make an exception. I found that one of the “greebling” pieces (Mini Accessory, No. 10 in Silver Metallic - 6266155/40598) made great missiles so I added a few of those underneath the wings. The pieces fit nicely in a Technic pin which can be placed in the underside of a normal 1x1 brick without too much stress on the elements.

After my initial struggle with the big wheel rim, I slowly started to appreciate it more and more and figured there must be more things that could be built with it. Staying with the sci-fi theme I decided to take a stab at something every space station with any self-respect should have, a decent power generator! 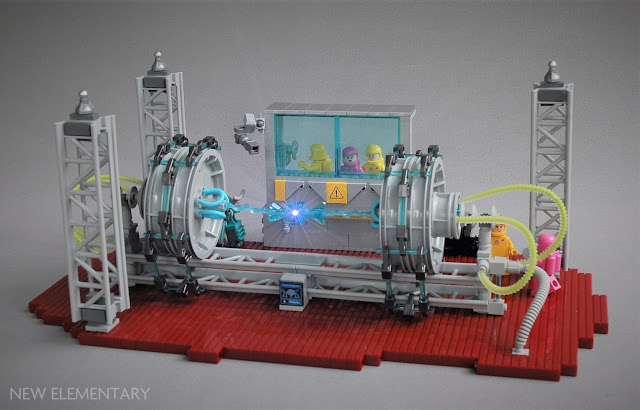 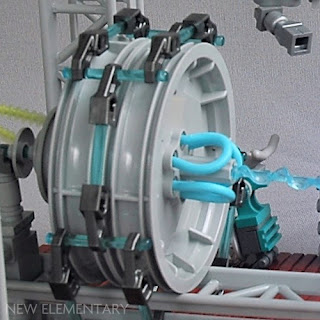 I also wanted to try and use the new staff from Toy Story (Tool No. 10 in Medium Azure - 6256157|49492). When building the power generator it became clear that the blue staff could be used to create a pretty cool effect if it was somewhat hidden.

Thanks to its curved top, I could place one of the ends in one hole in the rim, and then place the other end in the adjacent hole. This way, the only thing showing was a blue loop; the rest of the staff could be hidden within the rims. What really blew my mind was when adding a smaller rim to elongate the power generator a bit (to hide the ends of the staffs). The smaller rims had holes perfectly fitted to allow the staff to pass through enough for them to stick out as much as I felt was appropriate.

Continuing in the vastness of space, I decided to make a microscale space station. 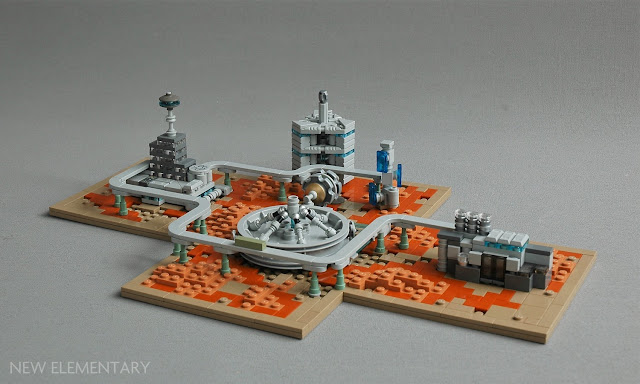 I had built something similar previously, but tried to integrate the rim in this build as well. When fiddling around with it I realized the small details on the outer parts of the inside of the rim (if that made sense…) could be used to connect a lever base with somewhat decent clutch. It’s not enough for a 7-year old to play with…but enough to display and use for a photo session.

Building steampunk has always been one of my favourite themes when making MOCs. I wasn’t sure what to build at first but figured you can never go wrong with a snail! 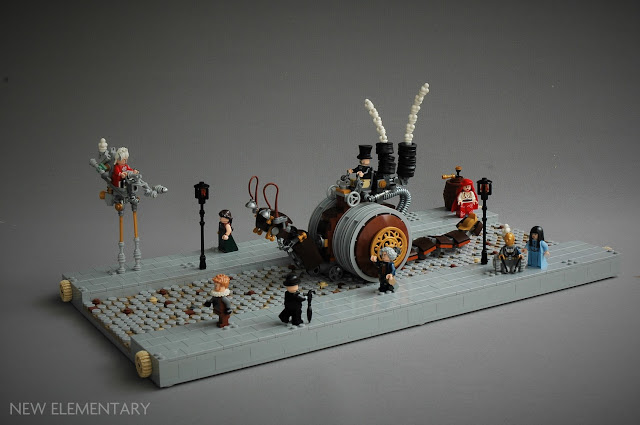 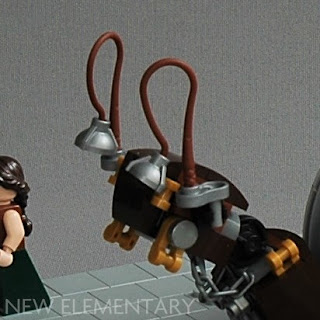 Placing two Fat Boy rims next to each other gave the build the bulky look I was going for so after that I just added details to make it into a proper steampunk snail.

The part I was most pleased with in this build is probably the eyes of the snail, made using the small dome pieces from the Mini Accessory, No. 11 in Silver Metallic (6266977|50018), together with two Reddish Brown whips.


READ MORE: AFOLs at our 2-hour workshop used the same parts to speed-build some creations

Products mentioned in this post were kindly supplied by the LEGO Group. All content represents the opinions of New Elementary authors and not the LEGO Group. All text and images are © New Elementary unless otherwise attributed.
Posted by: Elspeth De Montes Posted on 11/04/2019 04:30:00 am
Email ThisBlogThis!Share to TwitterShare to FacebookShare to Pinterest
Labels: Parts Festivals, Space, Technique