It is Parts Fest time once more here at New Elementary. We have posted a lovely selection of new-for-2019 LEGO® elements to some of the most innovative, inspiring builders we know and love. This time our featured builders are from Ireland, the Netherlands, UK, Germany, USA, Poland, France and Sweden; each with their own style and techniques to bring to our parts festival. 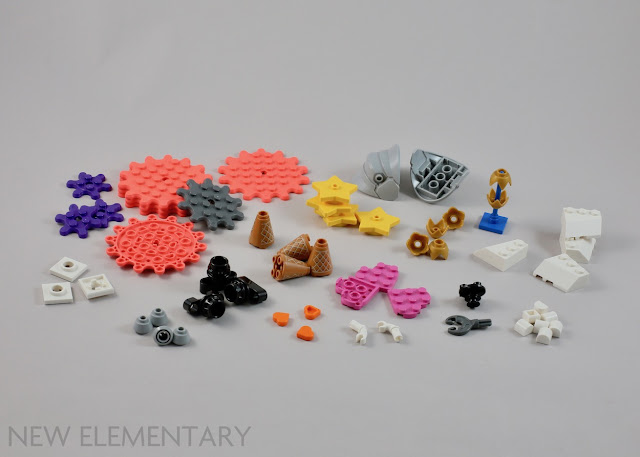 In this first post,  we wanted to introduce the elements included in this parts festival. All the elements are new to 2019 and almost all are completely new element moulds. Without further ado, let's meet the elements. 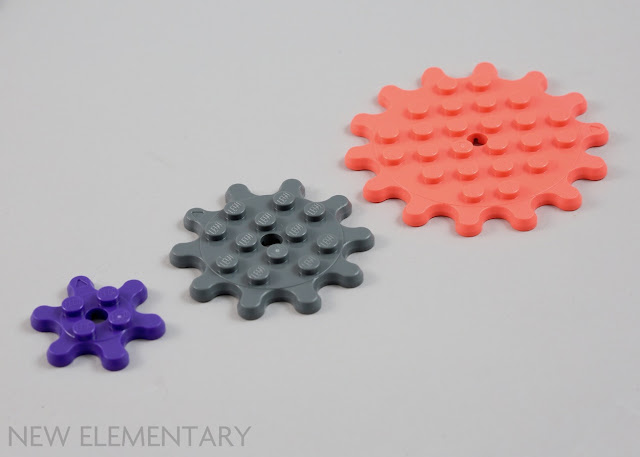 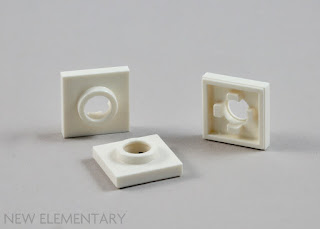 White Turntable 2x2 Female (6238334| 27448) is also included. LEGO developed the turntable base in connection with the new gears. 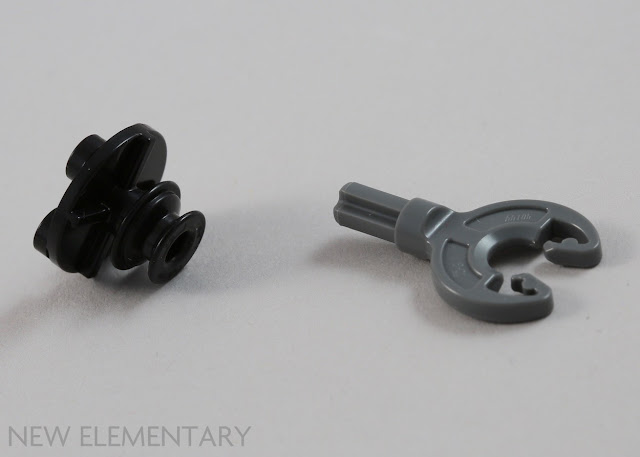 While Sven investigated some of the connections and play opportunities in our article LEGO Ninjago Turntables, we thought there was more to explore. Black Turntable 2X2X1, w/ Function (6252373| 40145) and Dark Stone Grey Turntable Holder, W/ Cross Axle (6252372|40144) are both going to feature in the next parts fest. 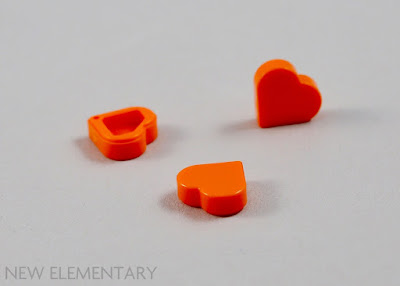 This element is exclusively found in the limited release 80102 Dragon Dance and you can see the other new elements that first appeared in this set in our article about the teasing 80102 Dragon Dance Twitter conundrum posed by LEGO Designer Nick Vas. 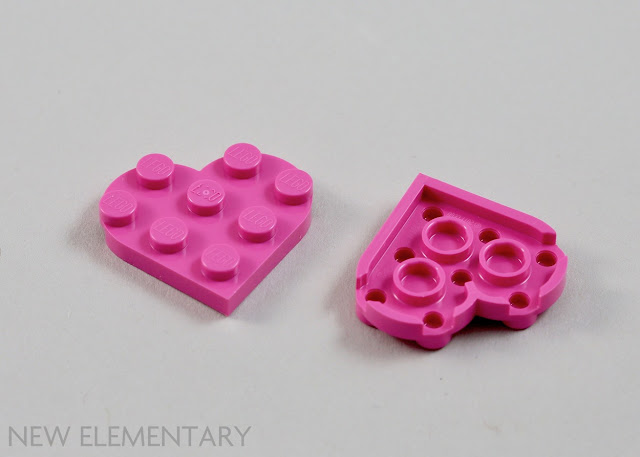 This new element offers an excellent alternative to stacking two Coupling Plate 2X2 (3176), which in the past have been used to create a heart shape. This new heart plate is exclusively found in four sets from The LEGO Movie 2 theme. At present it is not available in any other colours.

The Crown and Star 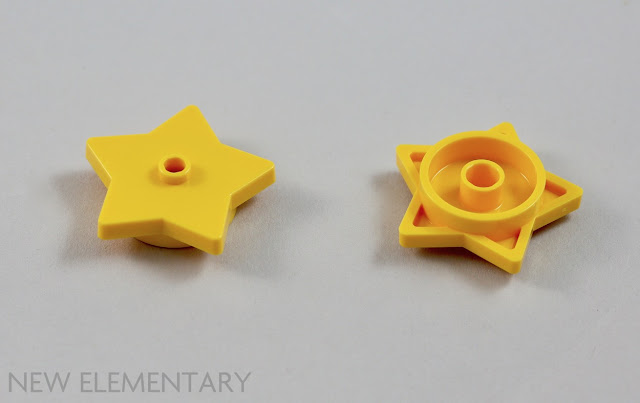 In May we chatted with LEGO Overwatch designer Woon Tze in Billund about the Overwatch theme and its new elements, including the development of Reinhardt's pauldron: Medium Stone Grey/ Light Bluish Gray Design Element 5X5X3 (6254171|49523). 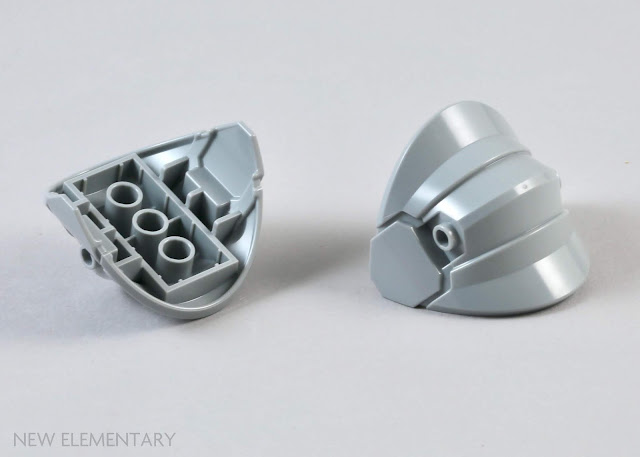 This element is exclusive to 75973 D.Va and Reinhardt (read our review here) at present and is a very interesting element for our parts fest. 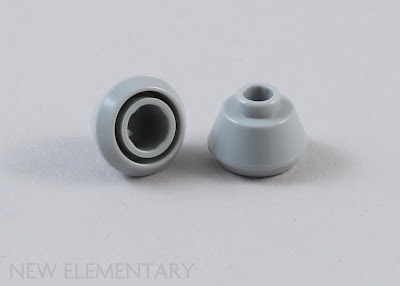 This element has a truncated cone shape at the top, an inverting curve at the base and is topped with a single recessed stud. The underside has an anti-stud sized central tube.  We also looked a little more closely at this element in our review of 75973 D.Va and Reinhardt. 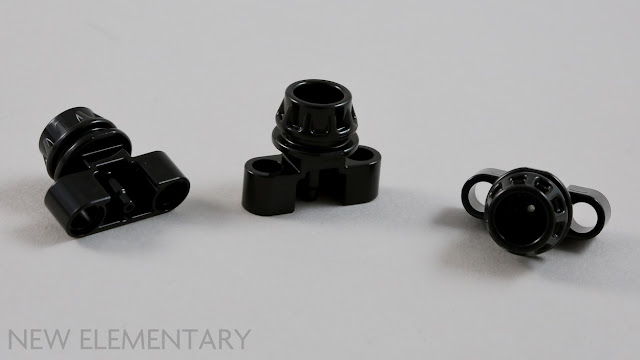 Black Pneumatic Connecting Piece, No. 1 (6249327|41817) might look like it has been taken from a complex Technic set but at the moment it is exclusive to one City set - 60216 Downtown Fire Brigade. We haven't looked at this element at all so it will be great to see what our builders come up with. 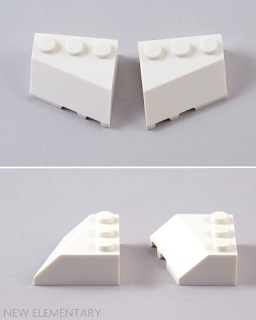 The element has a 45° slope at each end but being two studs wide at the top and three studs at the base gives it an 18° angle across the face of the slope. The top surface is a familiar shape as it matches a Left Plate 2x3 w/Angle (43723).

Shooter w/ Cross Axle, No. 1 (6248534|41812) has only appeared in three City sets from earlier this year so you may have not noticed this new element. It also appears in Dark Stone Grey in 76120 Batwing and The Riddler Heist, a DC Comics Super Heroes set released either last month or last week depending on where you reside. 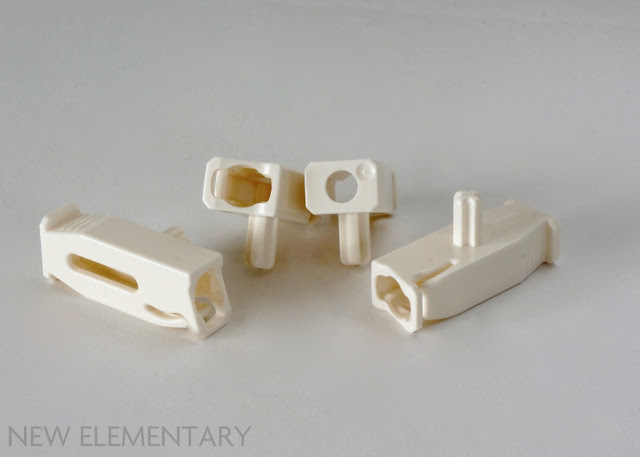 As a projectile firing element generally considered to be a 'play function' piece, we thought the Shooter would be an interesting challenge for our parts fest builders. 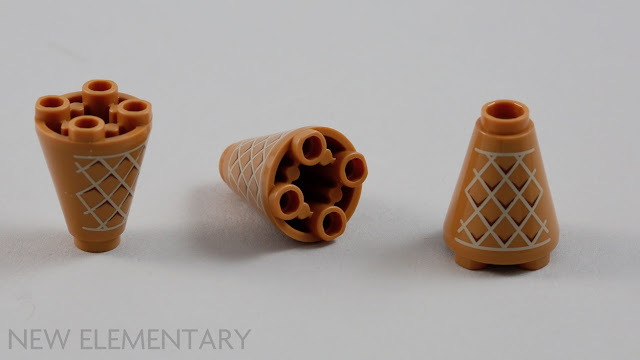 LEGO often uses a different Design ID for printed elements now which is important when searching for an element on Bricks and Pieces but less helpful when using BrickLink. 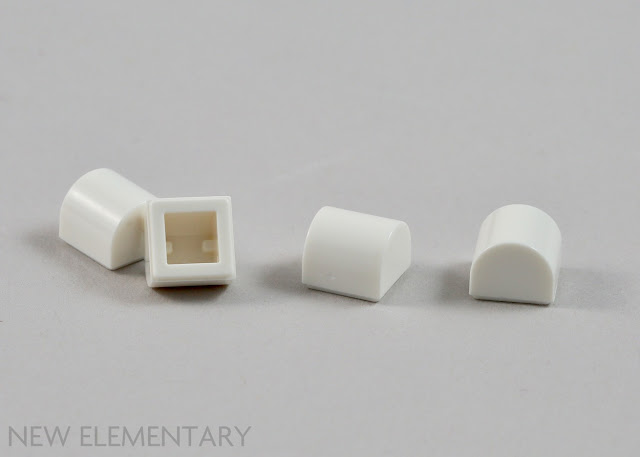 At two plates high, it’s a half-plate shorter than the "D" tile (24246) when placed on its side. And with some wiggle room for part tolerances, it fills the space under the 1x3 arch (Design ID 4490) rather well.

Let's see what our parts fest builder make of this little element.

This piece actually dates from 2017 but it kinda passed us by, and is pretty interesting as a right-angled bridge piece between Technic connections and 3.18mmm connections. Arm, No. 1 first appeared in Sand Blue (6177934|28660) in six Nexo-Knights sets all from 2017. 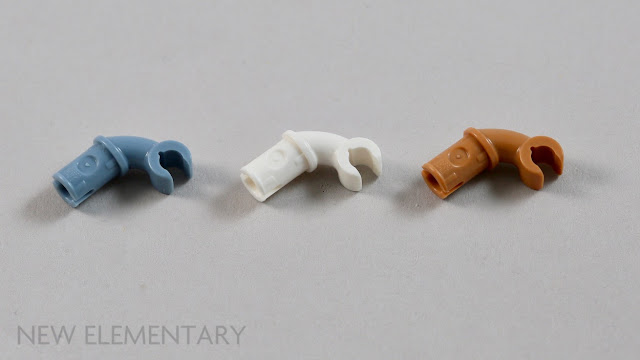 To keep things "2019" we were originally going to use the Medium Nougat (6259768) version from 70822 Unikitty's Sweetest Friends EVER! but went with the White from 2018 as it is more neutral. Let's just call this our 'outlier' element.

And that is it folks.

I'm sure you will agree that this is a great selection of new elements for our parts fest builders to explore so keep an eye out for our upcoming articles showcasing the results.


READ MORE: See what our first builder came up with, using the white stud shooter

Products mentioned in this post were kindly supplied by the LEGO Group. All content represents the opinions of New Elementary authors and not the LEGO Group. All text and images are © New Elementary unless otherwise attributed.
Posted by: Elspeth De Montes Posted on 8/15/2019 03:30:00 am
Email ThisBlogThis!Share to TwitterShare to FacebookShare to Pinterest
Labels: Community, Parts Festivals