The next LEGO® builder to introduce you to is Jaap Bijl (jaapxaap, found on Flickr and Instagram) from the Netherlands and he is a member of Lowlug and Innovalug. His building motto is “Never ask whether something is possible with LEGO or not. Only ask how.” Sounds like an ideal candidate for our challenging Parts Festival! Jaap has taken the unique approach of sending us weekly updates on his progress; an insight into his creative process.


A week ago I got my hands on the parts New Elementary sent me and that made me excited as I had no idea what pieces I would receive. I took the package straight to my room, got a pair of scissors and immediately opened it. Since then they have been sitting on the coffee table in my room! I had a lot of work to finish first but by having them in sight I still saw them a few times a day, to get inspired.

I started experimenting with the pieces that immediately triggered my creativity, such as the purple gear (Gear Wheel 2X2, Z6 in Medium Lilac/ Purple  – 6238330 | 35442). That was not because of the shape but the colour. If you follow me, you might know that I have done a lot of fantasy builds with purple, so getting new purple pieces was a fun surprise! It just looked like a flower to me. This was the same thought I had with the yellow star pieces from The LEGO Movie 2 sets (Design Plate, 4X4X2/3, No. 1 in Bright Yellow/ Yellow – 6248804|39611) which were a lot bigger than I expected, which means a harder (and more fun!) challenge to incorporate them into a build. 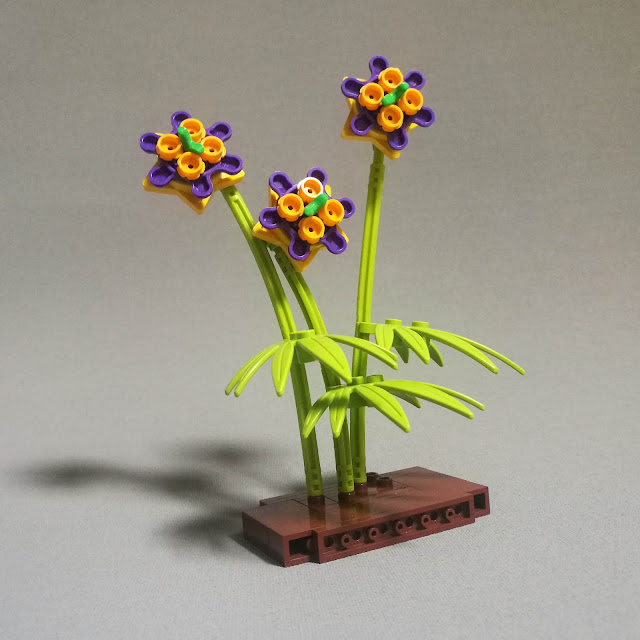 While building this tablescrap, I actually discovered that I can connect clips (such as on the lime leaf pieces) with the flexible Technic piece. Although those are fairly old pieces, personally I have never seen them connected in this way by others. Note; the soft material of the Technic piece makes this connection a bit clumsy.

Next were the heart-shaped tiles (Tile 1X1, Heart, No. 1 in Bright Orange/ Orange – 6258993|39739). This is a part I really like but because of the shape I already knew I wanted to use them without looking 'girlish'. While thinking about love, my mind led me to think of Cupid with an heart-shaped arrow. Then I realised that putting the heart in a clip would change the shape more towards something like spades on playing cards. This made me experiment a bit with connecting the piece on its top side. One of my first connections was to clip them between the studs of a plate. By adding a few more heart tiles next to each other, made the pieces really look like flames to me. 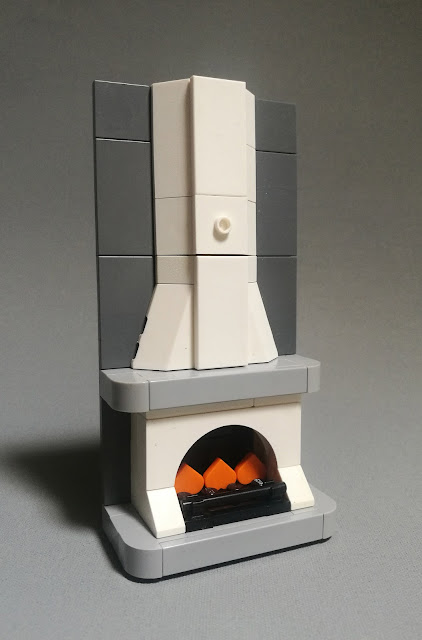 To end this first contact with the new pieces, here is an interesting connection I found with the 2x2 tile with a hole (Turntable 2x2 Female in White – 6238334| 27448). The piece got me thinking, what would be the advantages be compared to a 2x2 tile with a stud in the middle? For now, I end this little writeup with some Technic. 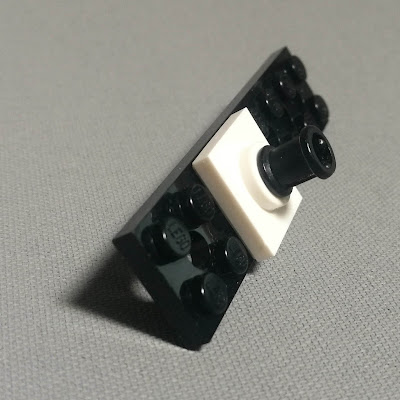 The hole is too large to hold the pin, hence the Technic plate below, but I like the look of this combination and want to experiment more!

Products mentioned in this post were kindly supplied by the LEGO Group. All content represents the opinions of New Elementary authors and not the LEGO Group. All text and images are © New Elementary unless otherwise attributed.
Admin: Tim Johnson Posted on 8/22/2019 03:30:00 am
Email ThisBlogThis!Share to TwitterShare to FacebookShare to Pinterest
Labels: Parts Festivals