We chose a difficult, controversial seed part for our latest LEGO® contest: 'Ship Front 12X12X1 1/3' (Design ID 43979). The idea was to BUILD using the seed part in an inventive way to FIX those negative opinions that this is merely a Big Ugly Ship Hull (BUSH). 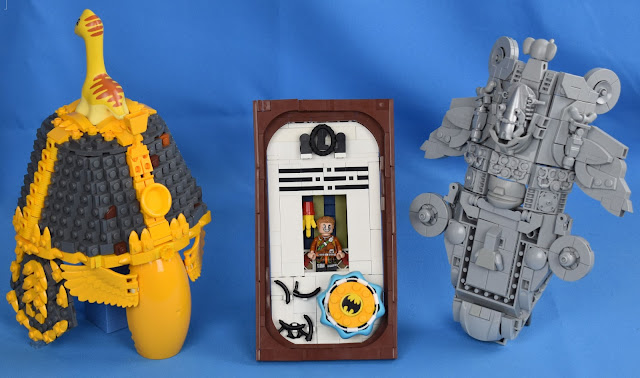 In creation - medieval russian helmet and stone mask of the Maya and certificate. 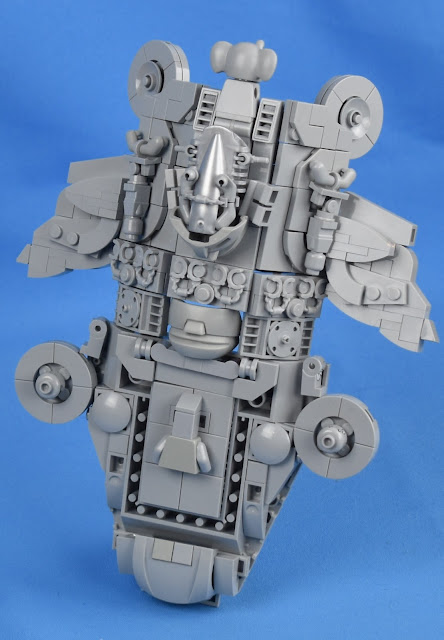 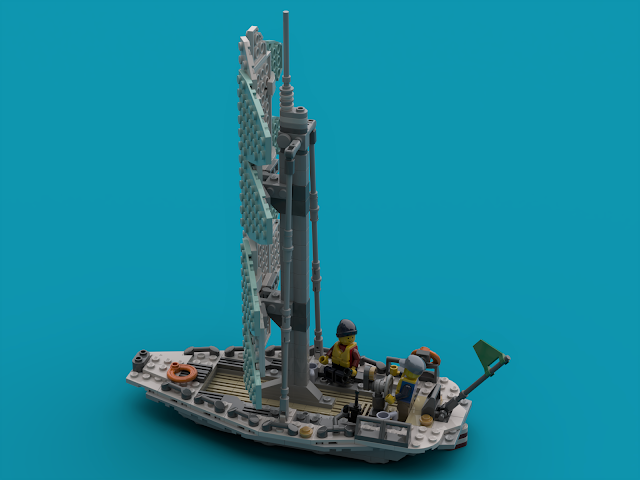 Some kind of Dyna-Rigg inspired little sailing ship. Not considered to be realistic. 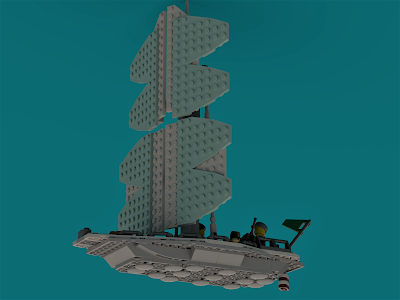 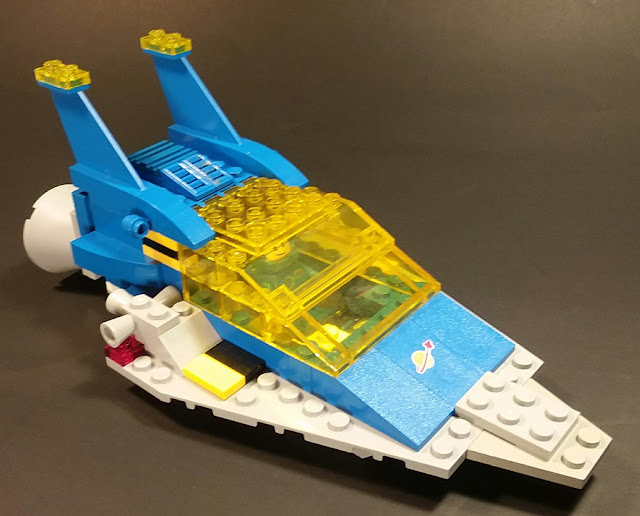 I liked the new smallish ship but like an enclosed one for better interstellar travels. I also spruced up the outside a bit. Kind of old meets new, it had the bones of an 80s NCS but needed some more current help. The seed part is way better than I originally thought. 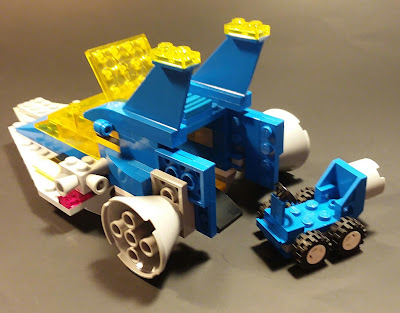 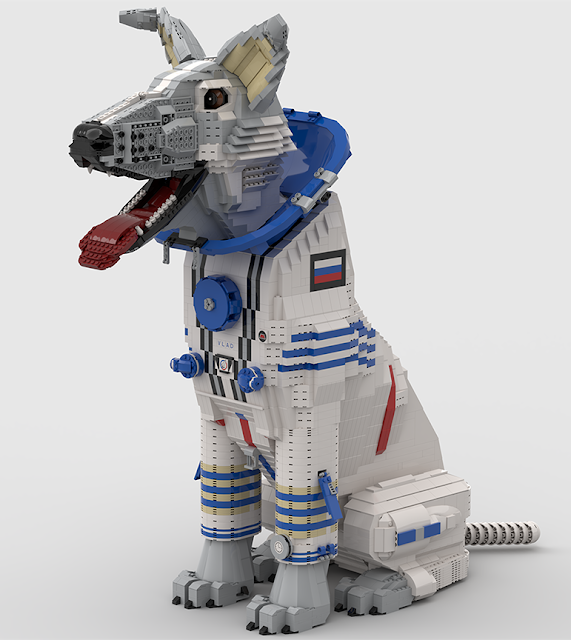 Vladimir ("Vlad") is one of a select few dogs chosen to accompany astronauts and cosmonauts on the ISS. He is a faithful companion, hard worker, and loves barking at pesky satellites that pass by every 90 minutes. 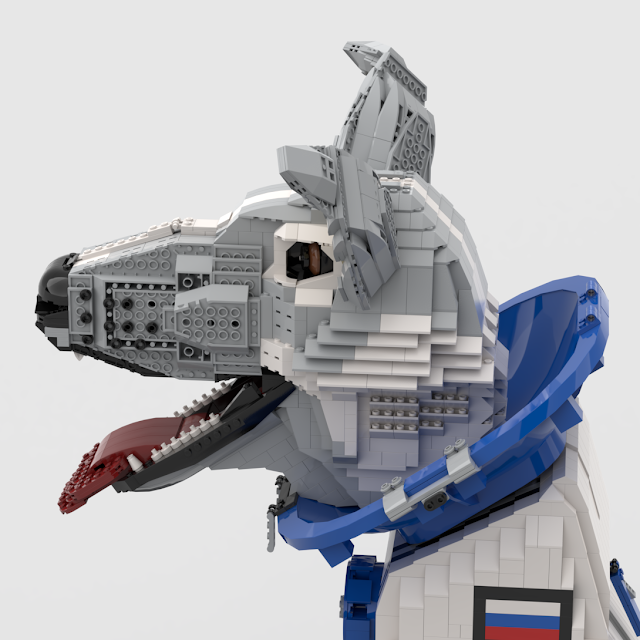 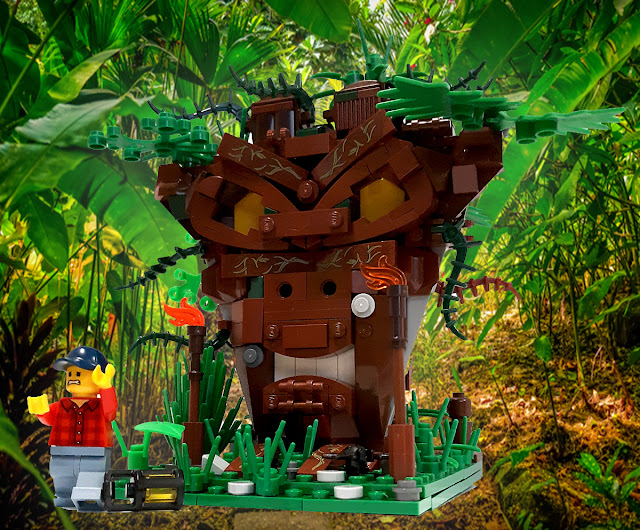 As soon as I saw this contents announcement, I knew exactly what I saw in that seed part; a giant tiki head! 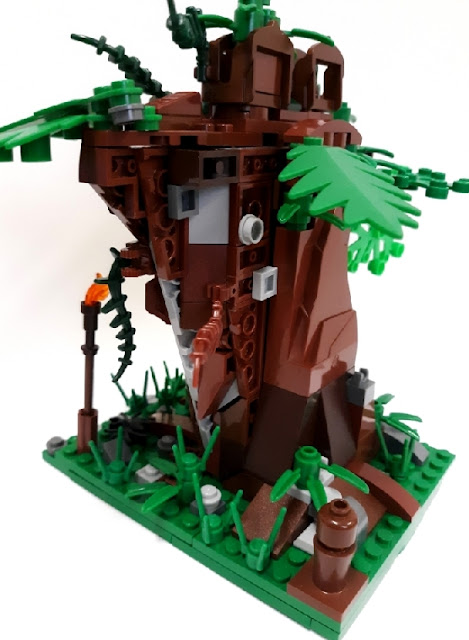 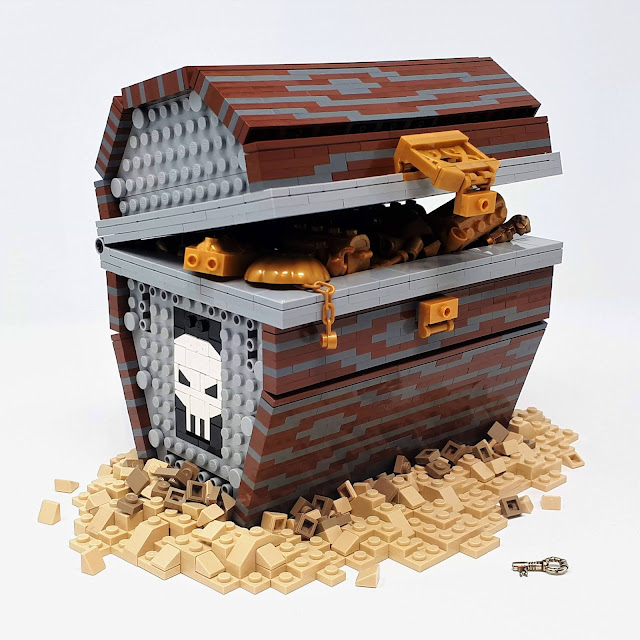 Wanted to find a use the recessed section of the part, a cheese slope skull mosaic filled the gap nicely! 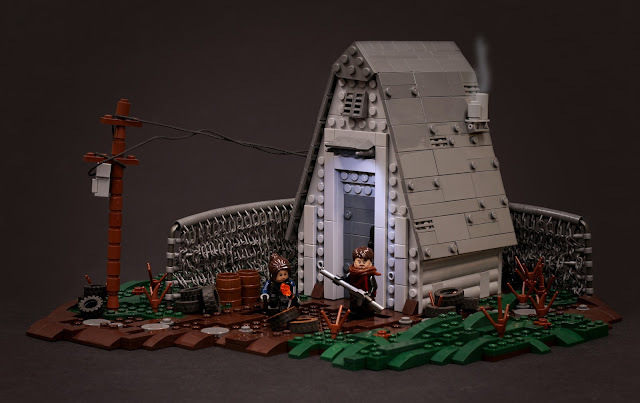 Resources can be scarce in these trying times, luckily rubber is still readily available if you know who to ask.

Quick! To the Star Beard! 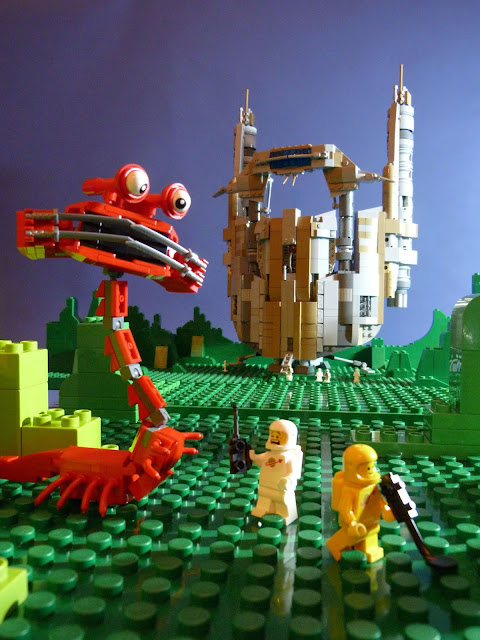 Some years ago this image came to me, inspired by Frank R Paul 1920’s cover illustrations for the pulp fiction magazine Amazing Stories. Just recently the image came back and said “it is time”.

So I was sat in front of LDD piecing together the central module of the ship, whilst also holding the Ship Front ID 43979 in my hand and wondering if I had any ideas to enter the Build and Fix competition, and I realised that the seed part was precisely the shape I needed.

So, as a result, I introduce the HYPerSpace Terrance Exploration and Research vehicle Star Beard!
The first image is the Frank R Paul inspired picture, and the second image shows the Goatee attack module (based around the seed part) and Tash command unit escape pod detached. 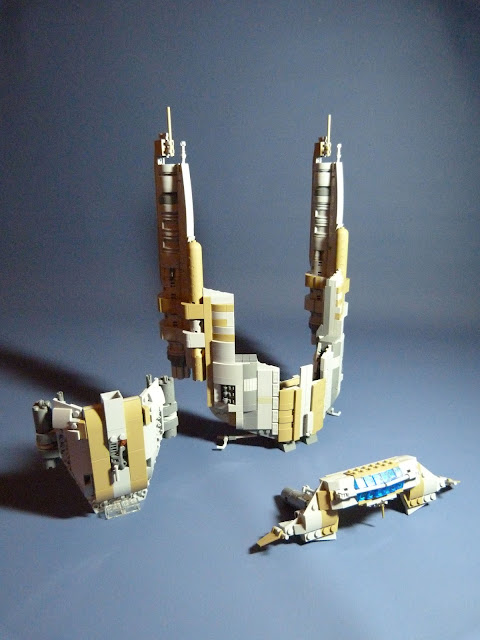 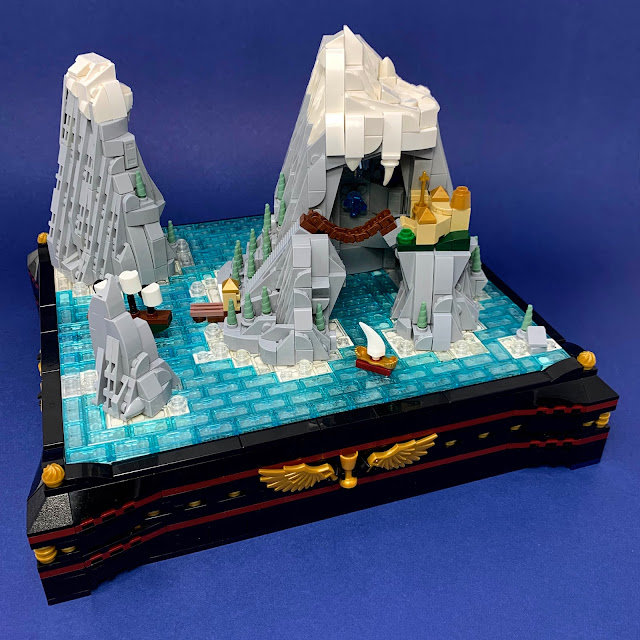 A tiny monastery perched at the mouth of a cave between the frozen heights and crashing waves of a volcanic island. My inspiration for this microscale build came from the secluded beauty of the Meteora monasteries in Greece. This build incorporates the new Ship Front part as a base for the large sea cave of the main island. 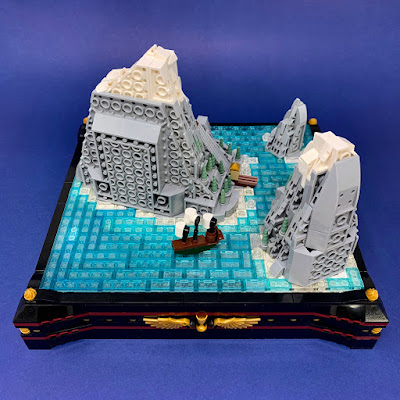 Bonus feature - the holes in the Ship Front part let light into the back of the cave to illuminate clusters of bluish crystals. Do the silent monks of the monastery know of the untold treasures of their island? Only the adventurous (and those not afraid of heights) can find out! 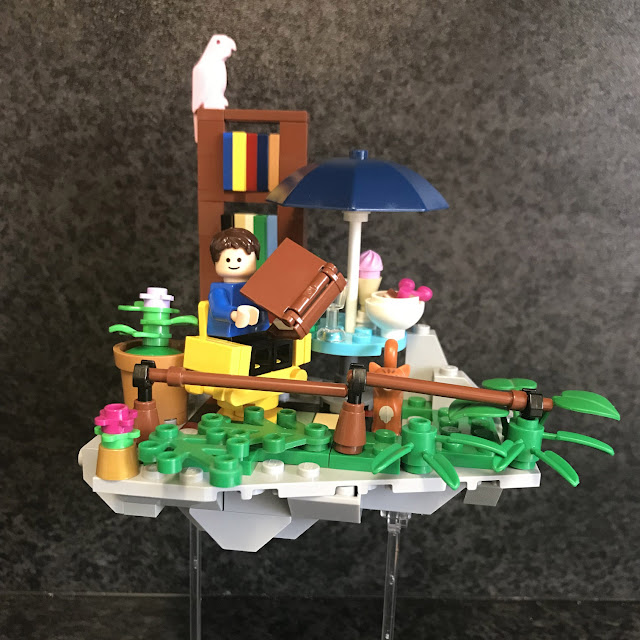 The floating Rock of Recreation; a place where the heavy-hearted and the burdened come to escape their toils. A space of tranquility where the books are numerous, the cat is friendly, and the ice-cream is always double scoops. 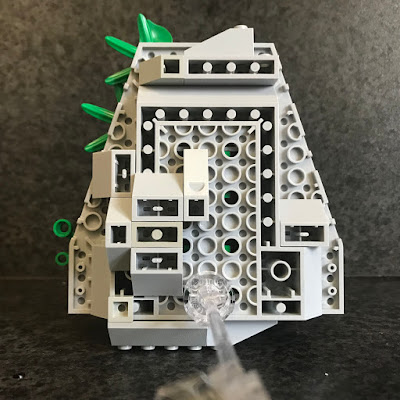 Don't make me clamp you! 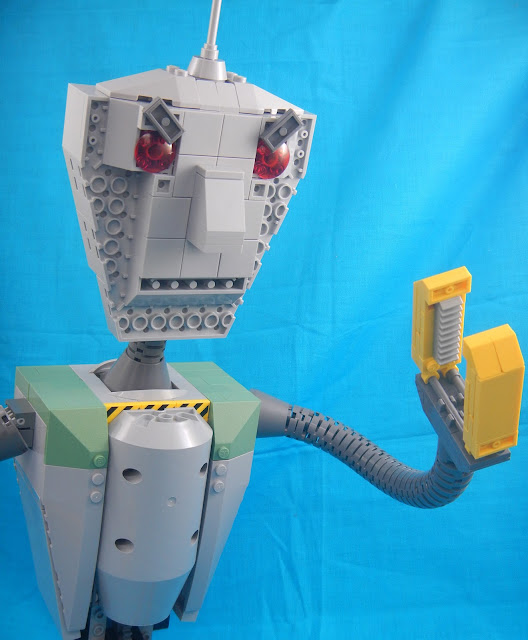 Based on the Futurama character Francis X. Clampazzo, aka "Clamps", a member of the Robot Mafia who has clamps for hands and an incredibly short temper. In this MOC, the seed part forms the core of Clamps' head. 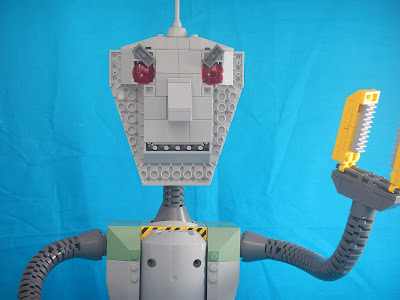 What do you mean? Space wants its BUSH back? 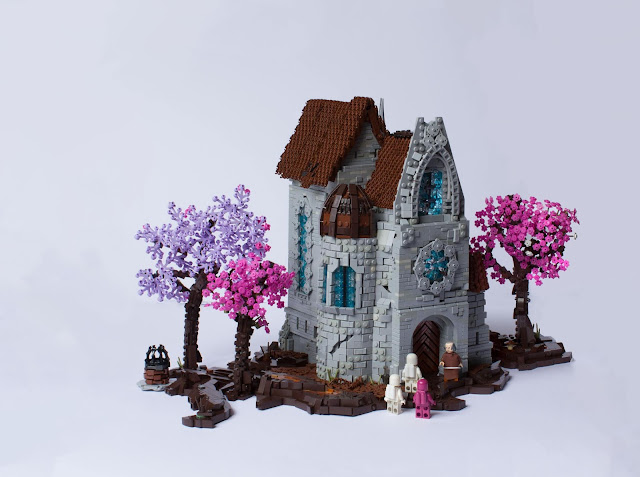 I used the holes in the BUSH base to incorporate some 4 mm hoses. The inner frame of the BUSH was perfect for making a mosaic as you can exert pressure without having to worry about everything blowing in you face.

There's some Modulex used for the dome and for the inner rose window and a single brick in the wall. I used quite a lot of turntables here and they are surprisingly usable and allow bending.

I didn't wanted to do a whole chapel but this was the idea that worked best optically.

Knoll, the engineering ogre, and her mech 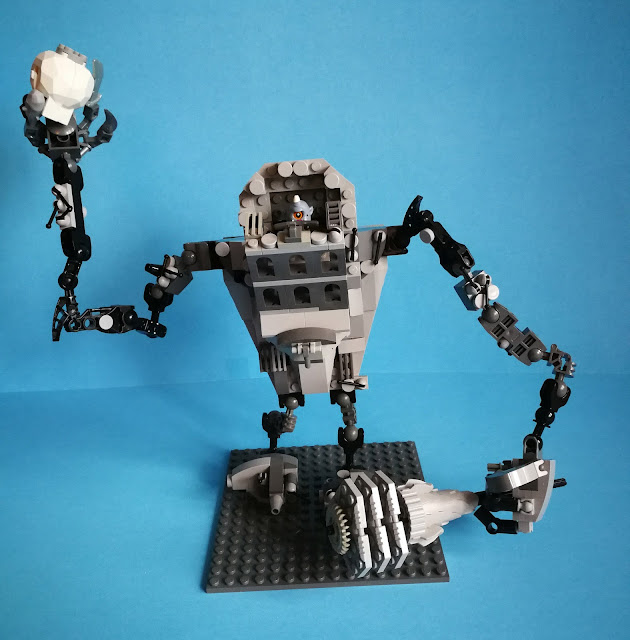 Ogres are typically known for their brawn, not their brains. Knoll is an exception. Despite, or perhaps because of her diminutive size, she has become a renowned engineer in the Notsosouthern Ogre tribes. Her newest creation, a mech suit, allows her to raid and pillage alongside her larger peers. 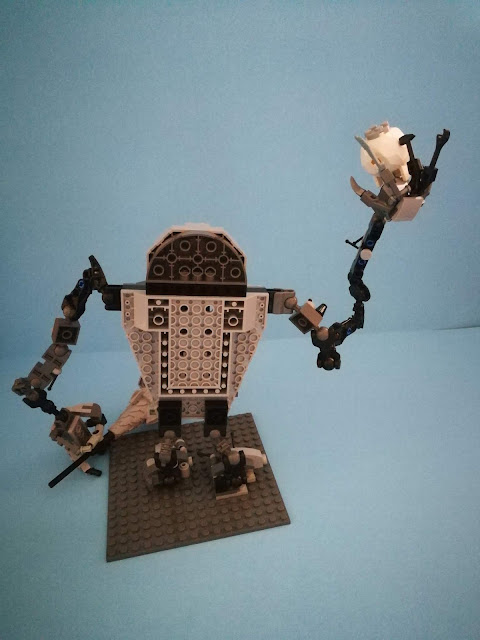 The seed piece made a great torso, with the cutaway section being prime for a standing control panel. 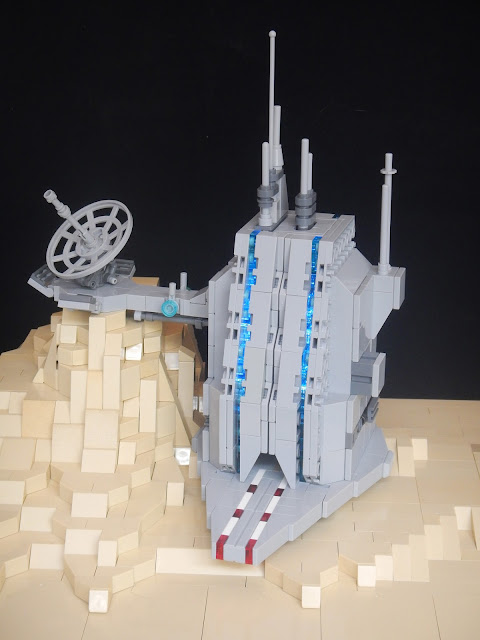 On a barren plateau on a remote moon sits Communications Relay Tycho. Without its massive receiver dish and transmission antennae, communication outside of the local solar system would be all but impossible.

Each side of the relay contains one of the seed parts as its core. It is lit internally by two sets of Power Functions LEDs, whose wires run through a hole in the base of the relay and terrain, and down a channel to side to the battery box. 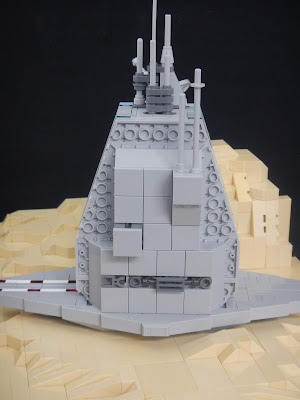 Posted by: Admin Posted on 4/16/2019 03:58:00 am
Email ThisBlogThis!Share to TwitterShare to FacebookShare to Pinterest
Labels: Community, Space