Recently there's been a lot of interest in the AFOL Designer Program, where a handful of fan builders have had their designs turned into crowdfunded sets for sale. Given that a couple of the builders are good friends of New Elementary, we thought we'd ask them for an insider's view on their designs and the program itself. First up, Jonas Kramm reveals how he used this opportunity to make a Wild West Saloon that is also an exciting parts pack. 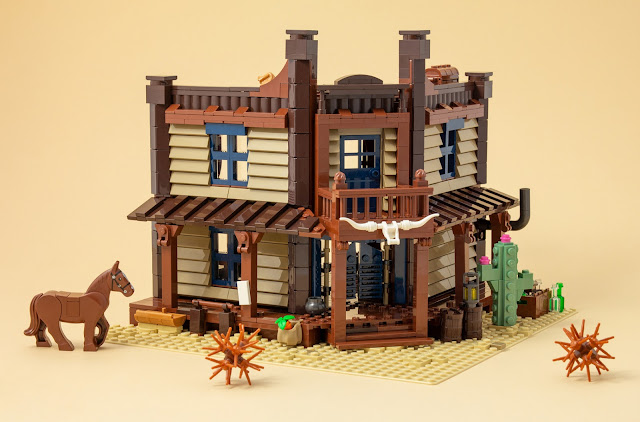 The AFOL Designer Program is a first-of-its-kind cooperation between The LEGO Group and BrickLink. Both companies collaborate on making a small selection of fan designs into sets for sale. That may sound like a second LEGO® Ideas to you but I will take a look at the differences, and they are essential!


Announced in September 2018, builders had two months to come up with new designs and submit them on BrickLink. Quite stressful, but the tight schedule will all be worth it when the sets get shipped – perhaps as soon as May.

After the submission phase the first part of the collaboration took place when the most promising designs of the 400+ entries got built and tested by a team including LEGO designers. They made sure that the models fulfilled all the predefined criteria: to be creative, new and not from a licensed theme. Because submissions had to be built in BrickLink’s own digital building tool Studio, they also had to test the models on stability.


Comparison of the AFOL Designer Program to LEGO Ideas

At this point in the path of a LEGO Ideas set the designers in Billund would take the submission and make it a LEGO set that fits within the company’s guidelines. The extent of how much gets changed differs from project to project, but as you can see on the recently released Steamboat Willie, they don’t hesitate to rebuild the model completely.

The AFOL Designer Program instead tries to stay close to the fans’ original designs and doesn’t intend to make any major changes on the submissions. For example, only a single detail was changed on my model.

The price of the freedom to produce sets of fan designs is that they are not official LEGO sets and therefore don’t come with the LEGO logo or a set number. The LEGO Group provide all the pieces, but packaging and shipping gets handled by BrickLink in the US.

The AFOL Designer Program immediately caught my attention but I actually expected that entries would be dominated by those fans in the community who focus on digital building. I decided to participate nevertheless and to use that opportunity to finally get familiar with a digital building tool.

I didn’t have to think long about what to create, as I was playing with the idea to build something from the Old West at that moment anyway; a theme many fans would love to see made by The LEGO Group properly. There were quite a few minifigures from that theme, but never really any larger buildings.

My plan was to build the whole model with real bricks and digitise it later but as I got more used to the software I simply switched over and finished the Saloon in Studio. 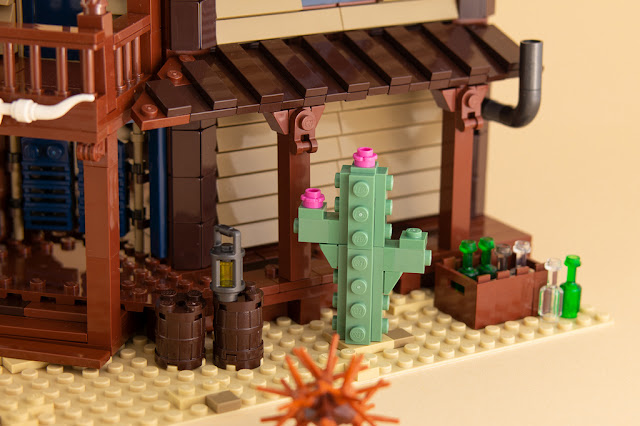 One of the building challenges were the walls. The technique to get that structure isn’t really new, but finding a connection that didn’t affect the interior took me several different tries. It’s now directly linked to the connection of the roof and oddly satisfying when you put everything together.

Another one was the entrance section that had to be built at a 45° angle. It’s actually just rotated upon one stud, but gets held in place by a clever build-around. 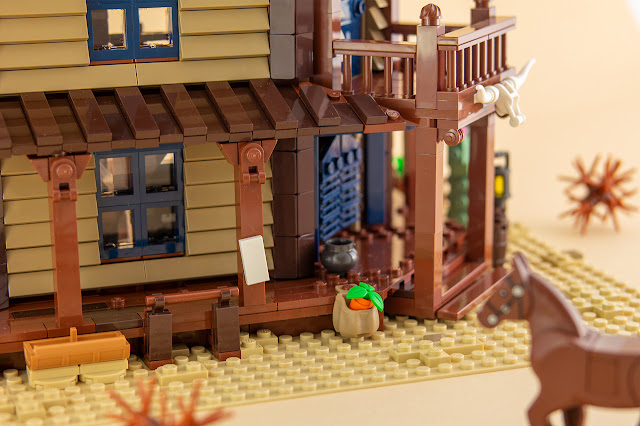 What really helped me when tackling these problems was to build them in real life. That not only makes it easier to find the right technique, but you immediately get an idea how sturdy it is. Angled sections are especially hard to build on the computer and should be tested with bricks first. On the flipside, it takes only one click to try out different colour combinations digitally, and copying a wall design is way faster. I tried to use the strength of each method to my advantage in the designing process.

When the rough work was done, the most enjoyable part of the building process began – I started adding details. Of course I had already designed some of them while doing the rough work, such as making the piano fit under the stairs, but there was still a lot of space to fill. 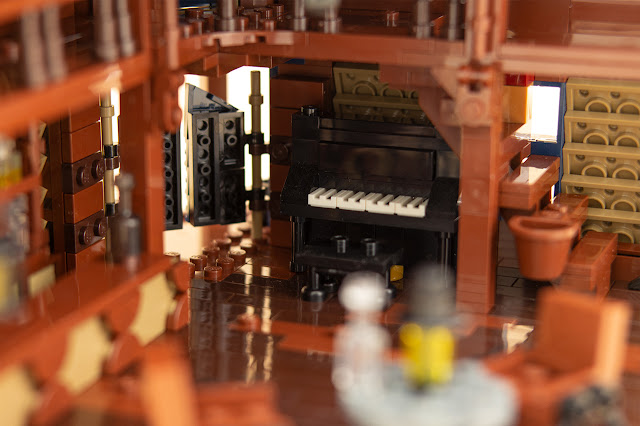 On the outside, my favourite one has to be the tumbleweed as I don’t remember seeing one included in Western models before.

A close second is the skull. My first idea was to use the special cow skull mould (Element ID 6032363), but that wasn’t available. So I went with the droid body instead and in the end I found that way more creative. 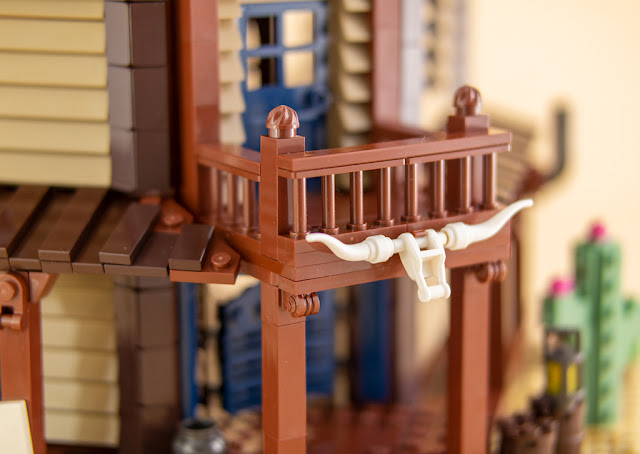 From the beginning, it was important to me to give the Saloon a full interior and so I had to make a key decision: giving it a wall on the back and stacked floors, or to leave it open. I went with the open back as I think it fits the model better. I like that you can actually lay down your chin on the desk and explore the interior from the point of view of the minifigure instead of looking from above. That way you can better appreciate the different floors inside, and appreciate details like the chandelier. Part of the roof can still be removed to make playing (...what the heck, who would do that?) in the gallery easier. 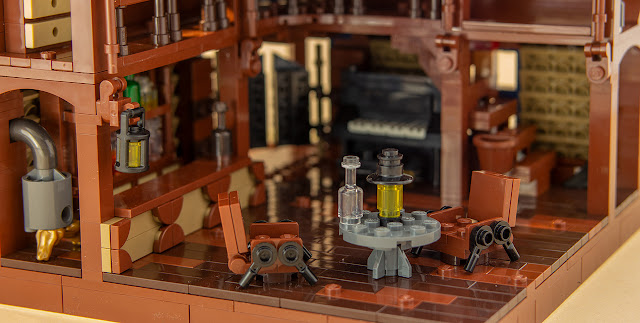 The lamp on the table is a homage to one of my very first posts on New Elementary, about lamp designs. Also the stove legs made from frogs (6171138) are worth a mention I think.

The pieces available for the program were defined by The LEGO Group and comprised only a selection of the parts that are currently in production. This meant that entries could not include part/colour combinations that don’t exist. The only exception to this rule is the one “exclusive part” in each set. Even us designers haven’t been told yet what it is, so I’m as curious as you to find out.

To make sure that the builders knew the usable pieces, BrickLink released a special palette for Studio which made it very easy to filter the parts by colour or type.  While I read the complaint many times that the selection was too small, I was rather surprised by it. Not only were all common parts available but also pieces that I didn’t expect at all, such as the Bright Green plant stem (6235080) from the Neville minifigure. I guess that’s one of the benefits when your models are usually limited to your own collections. At my Western Saloon, I could go wild.

Of course my build is designed to be a good looking model, but as a huge lover of parts I couldn’t resist making it a quite good parts pack as well. 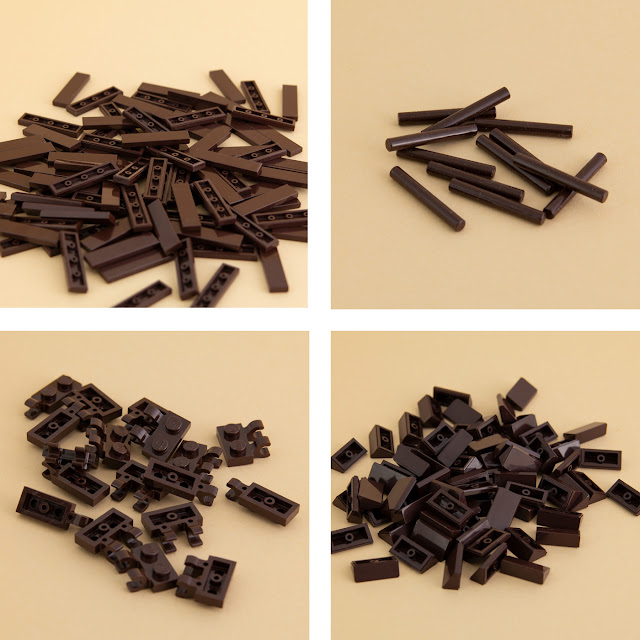 Flat Tile 1X4 in Sand Yellow [TLG]/ Dark Tan [BL] (6175927|2431) was introduced last year thanks to the BrickHeadz and completes the Sand Yellow tile family. But it hasn’t been used much since then, so I was glad to make good use of 30 here.

There is much more, but for now I will leave that as a surprise.

Throughout the whole process of turning the fan submission into real set, BrickLink worked closely together with the fan designers. After the testing I was informed about the one change that was made to my original submission. Initially I had used a wagon wheel as the centrepiece of the chandelier, but there were concerns that due to the square edges, the clips could break. Something you tend to forget when you build your own creation, but that could ruin the day of one of the thousand supporters who pre-ordered the set. I like the compromise that was made as it still looks good and is very sturdy. 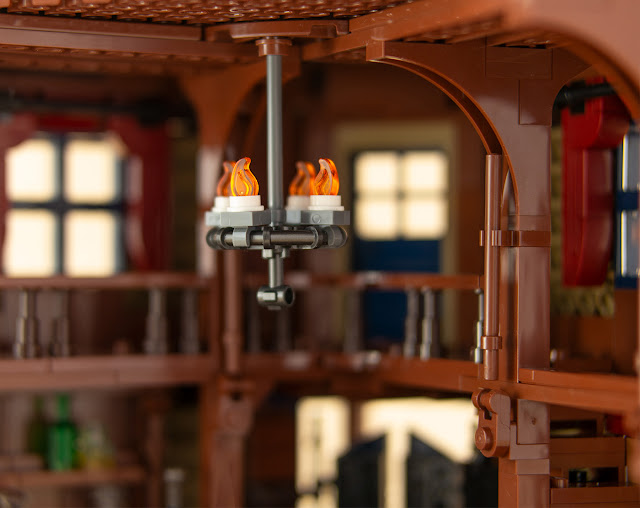 The BrickLink team isn’t used to making instructions, so they asked for help in this matter. I know how to handle my model so I could give them some feedback and as a result the instructions – from what I have seen – could live up to the high expectations we are used from official LEGO sets.

Recently they revealed the boxes, specially designed for this occasion. They look minimalistic, but stylish. The front side shows the “60th anniversary logo” in the top right corner and on the bottom right each set is numbered by hand. The inside of the sleeve is printed and can be used as a background. 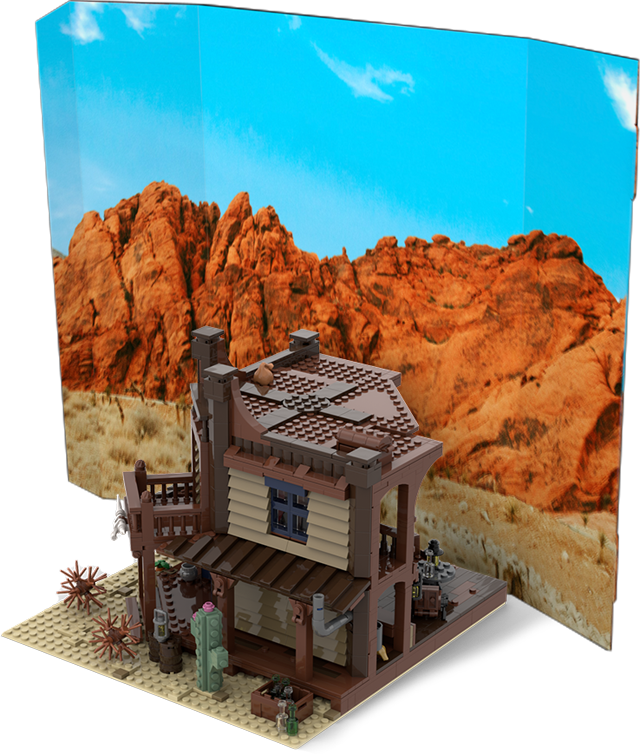 Personally I like that they went with slide boxes and vary a bit from the ordinary set boxes.

One of the criticisms I received about my Wild West Saloon was the lack of minifigures. I can totally understand the concern, because when I see a new LEGO set in minifigure scale I care about the figures as well – I’m interested if there are any headgear, or prints on the heads or torsos. For the AFOL Designer Program, only existing parts were available. The selection for LEGO CITY minifigures was okay, but with no Western theme available at the moment there were no suitable torsos, legs or heads available. Instead of putting any minifigures in, that feel out of place and that may up the sale price, I left them out. But you get a horse!

Personally I will display the Saloon with the figures from The Lone Ranger movie, but I’m sure the Western figures from 20 years ago, the ones from the Collectable Minifigure Series or the first The LEGO Movie will fit great too.

This isn’t the usual review here on New E, as I am in fact the designer of the set I can’t give you an objective opinion. But if my model caught your attention, give the Wild West Saloon a look on the crowdfunding page and consider if it’s worth going into your collection. It’s $149.99 for 1496 pieces. (Please keep in mind that the sets ship from the US and so may come with additional fees.) Also look around and maybe support one of the other great crowdfunding projects. All 13 successfully crowdfunded designs are available for general sale until July 1. A maximum of 2500 copies of each set can be sold. 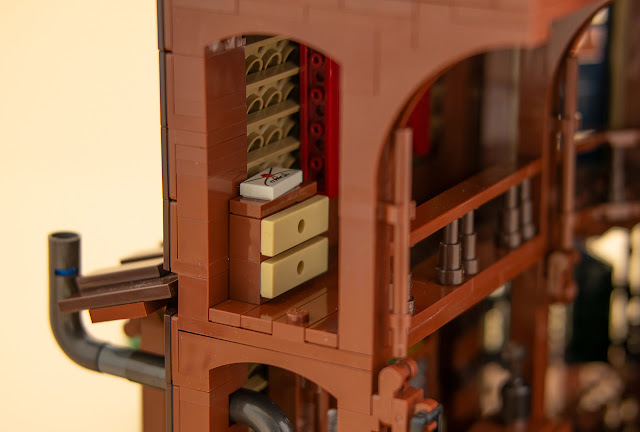 If you have any further questions about the model or the program, please leave them under this article, I will be around to answer them.

Posted by: Admin Posted on 4/30/2019 04:52:00 am
Email ThisBlogThis!Share to TwitterShare to FacebookShare to Pinterest
Labels: Community