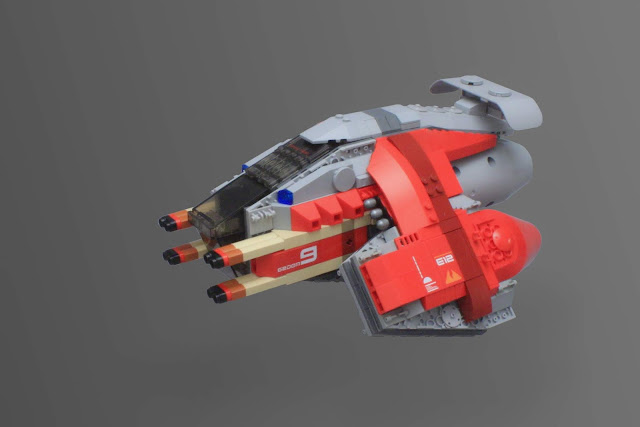 I ordered six 43979 and started combining them in different ways. I liked the shape I got from combining two of the parts stud-to-stud. I started attaching bricks on the outside of the parts and this is the result. There are two engines with two 43979 each, and there are also two 43979 in the front of the fuselage.


I imagine this to be a shuttle for in-atmosphere flight on a far away planet, enforcing customs regulations in a busy spaceport where things usually get a bit rough. 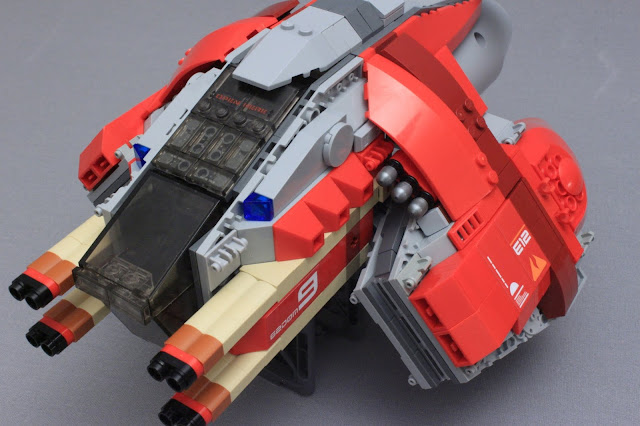 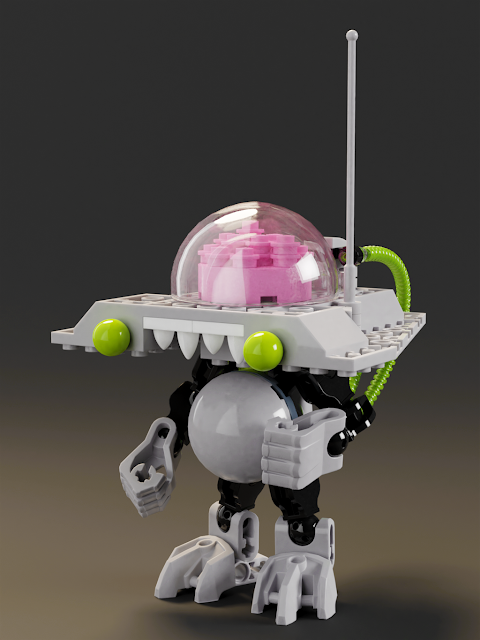 An interesting little specimen buddy with the Ship Front 12X12X1 1/3 (Seed Part) used for it's head.

As a design note, I didn't polish off the head with tiles and sloped pieces because I wanted to maintain the look of the seed part, and I thought it looked good enough as it is with the brain and the antenna. 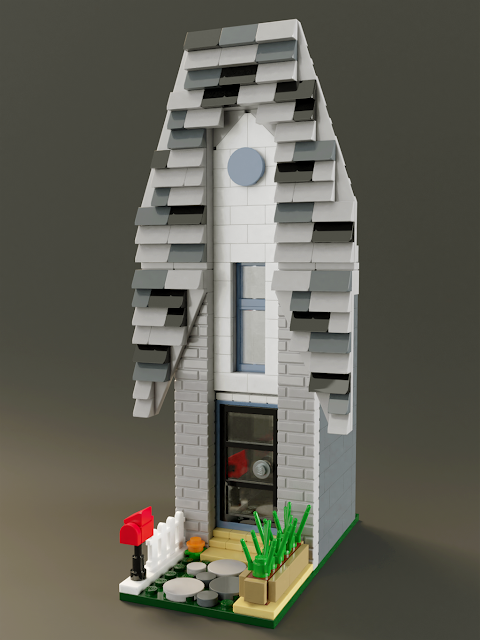 Upon inspecting the Ship Front 12X12X1 1/3 (Seed part), I thought it would fit well on top of a small
house. So I attached some sloped bricks onto the seed part to create the roof shape, and some cheese slopes on the front for some texture. 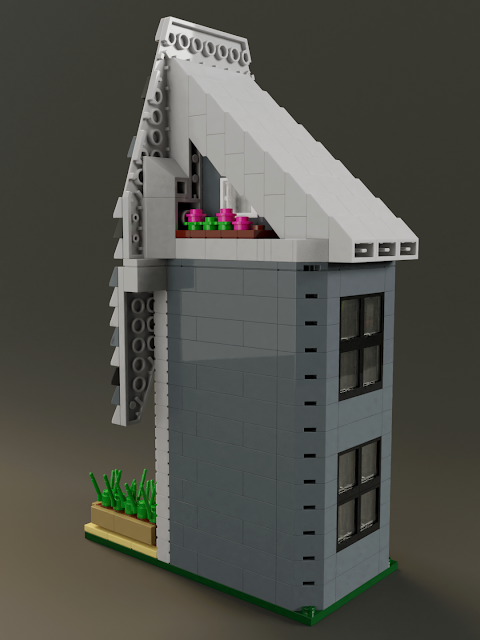 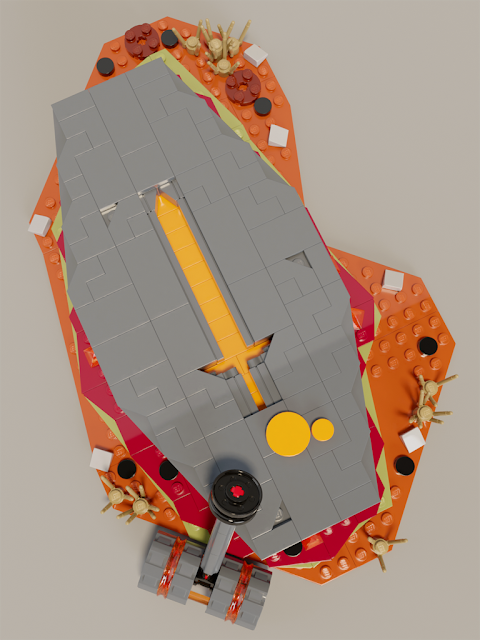 This idea came as a fluke when I was just messing around with the seed part. Four Ship Front 12X12X1 1/3 placed in a way that it would form the shape of an anvil of some sort. I thought that the indentation of the seed part could be used for something interesting, which is why I added a sword casting mold at the center. 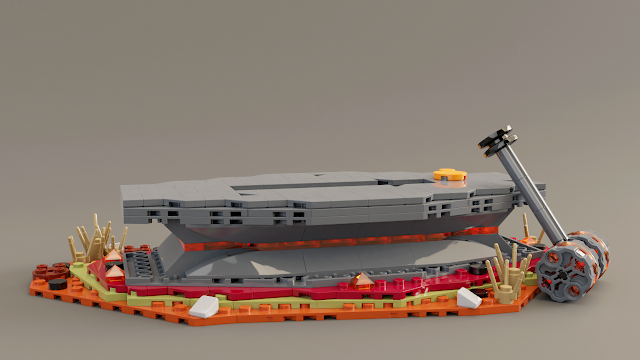 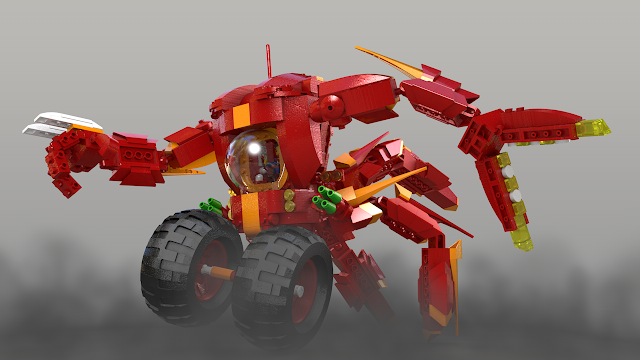 MeCrab is a rare hybrid mecha that came from the sea, nobody knows who built this robot, but it's really fast and resistant, some people says that it was made by intelligent creatures inside the ocean inspired by the anatomy of some sea monsters to fight against them. 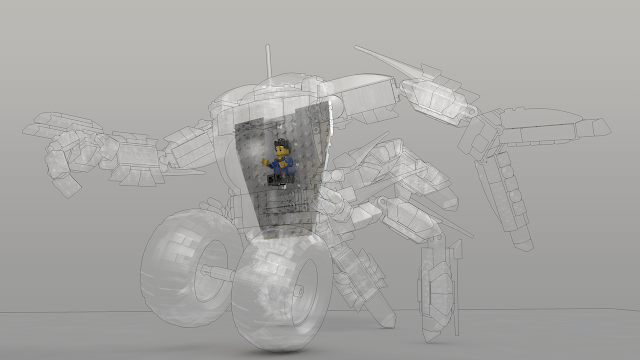 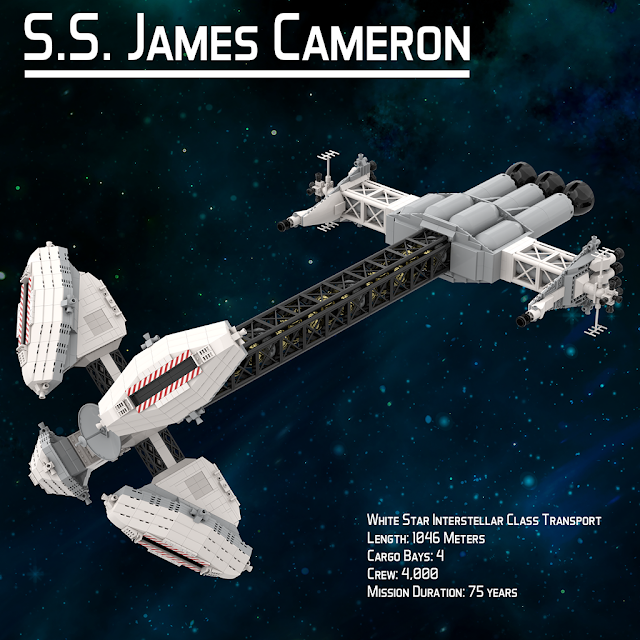 In the distant future, earth is exploring other solar systems with the help of giant spacecraft like the S.S. James Cameron, a White Star Interstellar Class Transport. This spacecraft is 1046 meters long, has 4 large cargo bays, a crew of 4000, and a mission duration of 75 years.
There are 12 of the seed part in this build and it has 1664 parts in total. 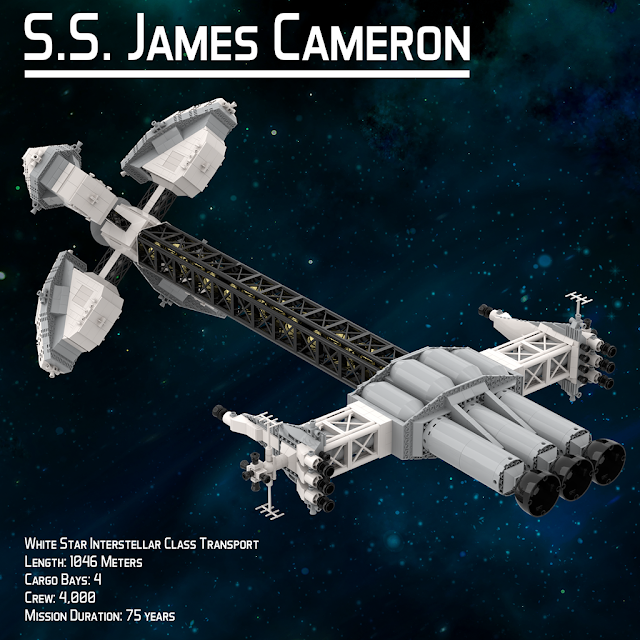 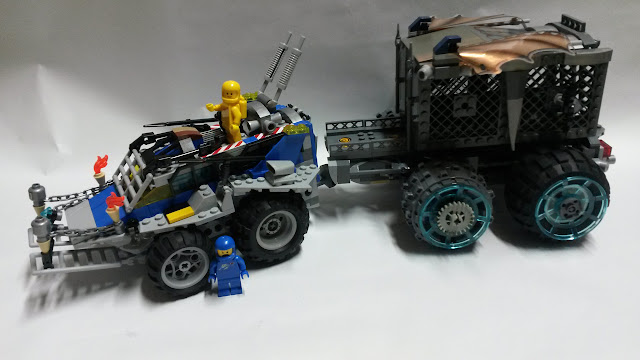 A simple apocalyptic space wagon build for benny and his crew to catch the evil Duplo monsters. 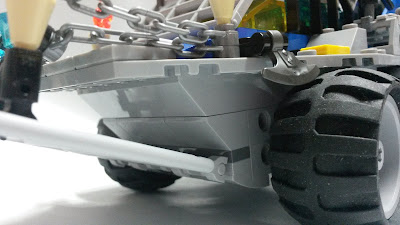 Tools Of The Trade 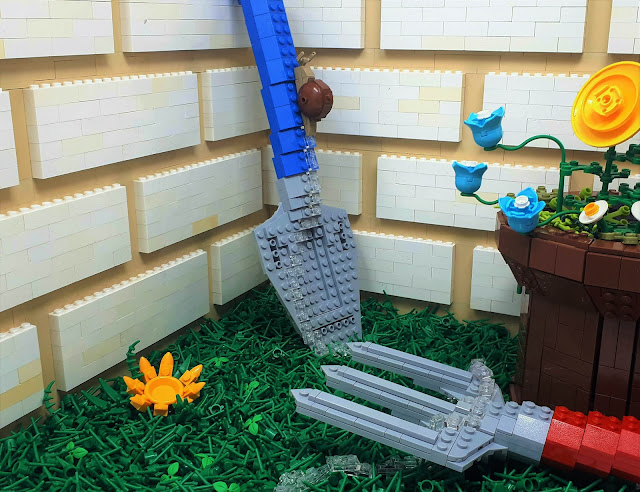 Despite Gardener Gary’s best arguments, Shella was insistent on assisting him planting the new raised beds! (Shella...get it? because snails have *shells*.. get it?..anyone?) 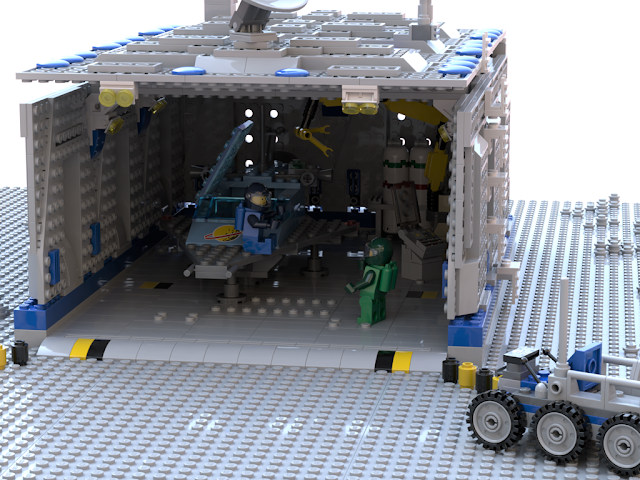 Classic Space inspired, could be used anywhere, though. -- This is on Stud VII, a large moon with dusty and stormy atmosphere, so even the coolest spacecrafts need some kind of shelter. Manufactured by TASC Limited (The Anti Stud Company). 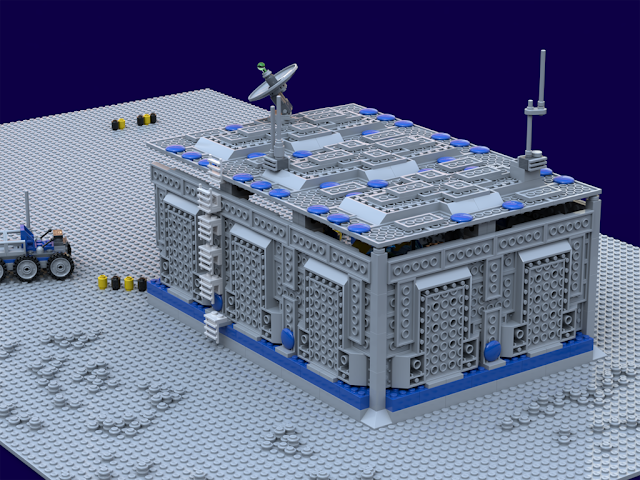 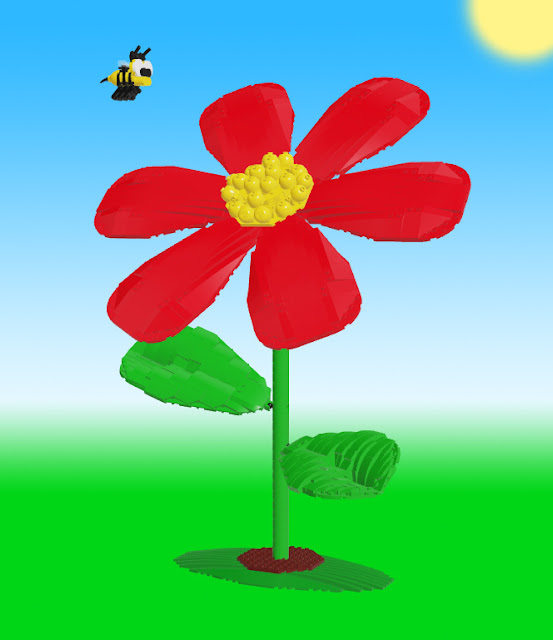 I used 8 of the seed part to create a cartoony flower. The seed part serves as both the petals of the flower and the leaves on the stem. The recessed area in the middle of the part and the Technic holes on its wide end allow the leaves to have that curved crease in the center. I also included a cute little bumblebee for fun. :) 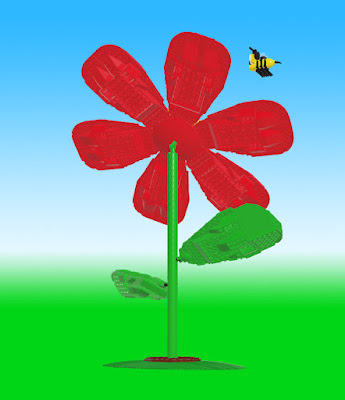 Emmet didn't think of this, did he , brother ? 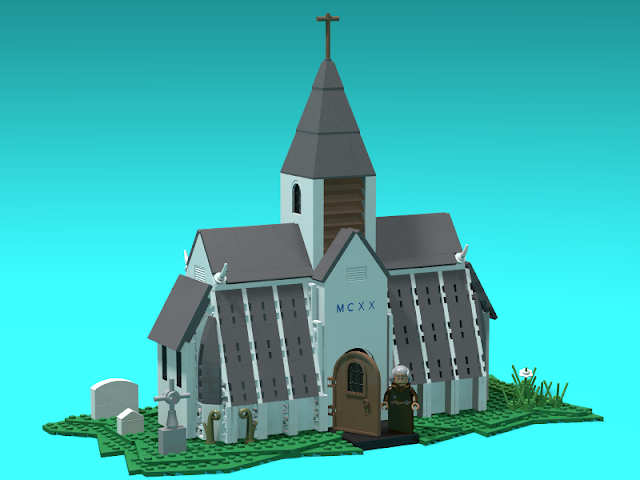 "This is no cave" 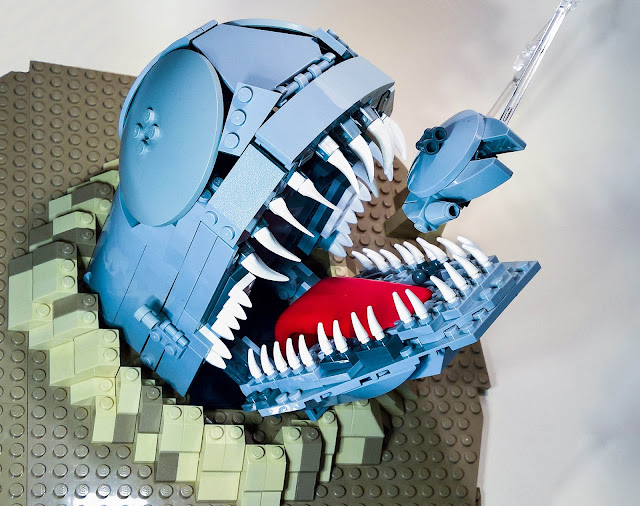 The famous space worm scene from SW:Episode V. I think that the seed part is almost perfect as the Exogorth's jaw, it just needed some teeth and a tongue made with a Fabuland car roof! 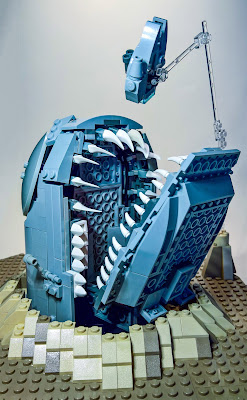 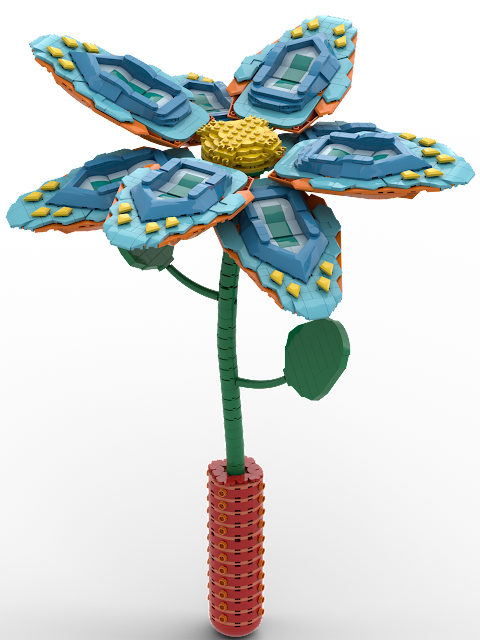 What can I tell you... That's a simply sky blue flower, I used the seed part for the petals, which are not Light Bluish Gray. Sorry :) Hope that you guys enjoy the idea and the flower! 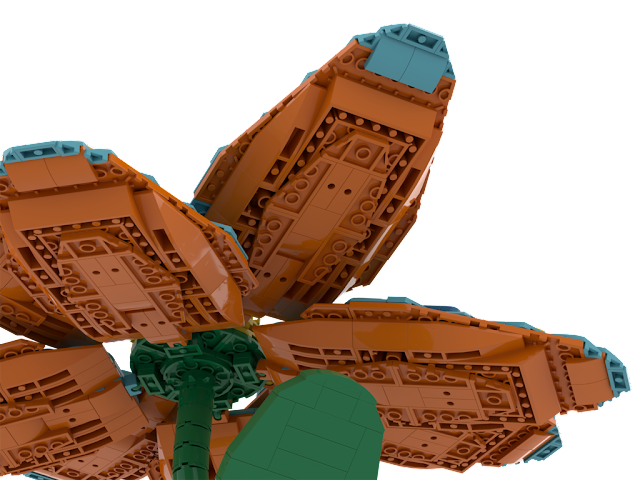 Posted by: Admin Posted on 4/15/2019 09:35:00 am
Email ThisBlogThis!Share to TwitterShare to FacebookShare to Pinterest
Labels: Community, Space