Eero Okkonen (on Instagram) continues his occasional series of articles today looking at techniques using specialised LEGO® parts he likes to put in his own creations. In previous articles he examined Windscreen 9x3x1 2/3 Bubble Canopy and Wedge 4x3 Cut Back with Cutout; then Wedge 4x3 Open with Cutout and the two 3x4x1 2/3 Curved Vehicle Mudguards. Today's selections, dating from the 1990s and 2000s, have no particular similarity other than being the kind of LEGO part that some people complain about being too specialised! 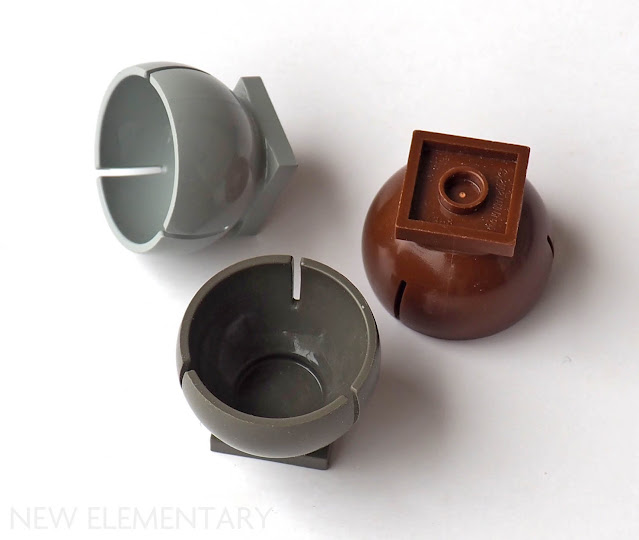 Cylinder Hemisphere 2 x 2 Ball Turret Socket Bases, introduced in 2002 LEGO® Star Wars Episode II sets, are a deceptively useful part. They’re currently available in 37 sets, used mostly as ball turrets as their name suggests, but also as eyes, catapult buckets and pots. Although not common, the piece has received fairly regular appearances in sets and is still in use, last appearing in 2020’s 76153 Avengers Helicarrier. The most common colours are light bluish grey followed by reddish brown, but they have also appeared in old grey and old dark grey, dark blue, lime and tan. 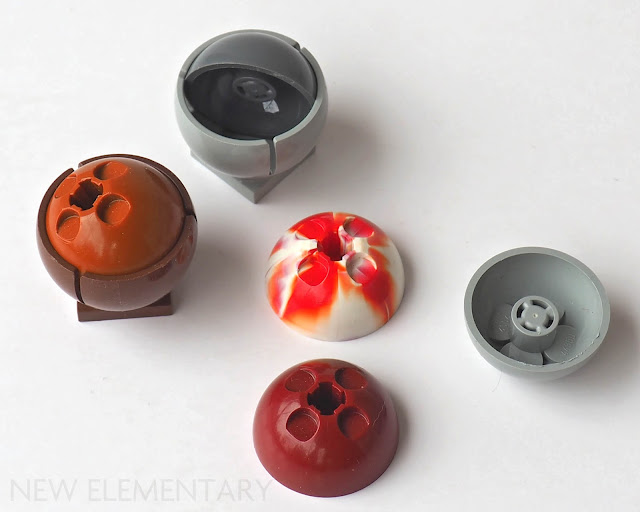 The original counterpart for the turret socket is Cylinder Hemisphere 3 x 3 Ball Turret (44359). “Cylinder” is quite strange category for BrickLink to have given this piece, which is essentially half of a 3x3x3 sphere (Rebrickable categorise it as a Dome and TLG a Ball). It is available in reddish brown, dark bley, old dark grey, dark orange, dark red and glow-in-dark trans. There’s also a white “eyeball” variant (44359pb01) which, quite interestingly, is used as a bowl in a Scala house in addition to being giant squid’s eye. It is also sometimes used as a bowl. 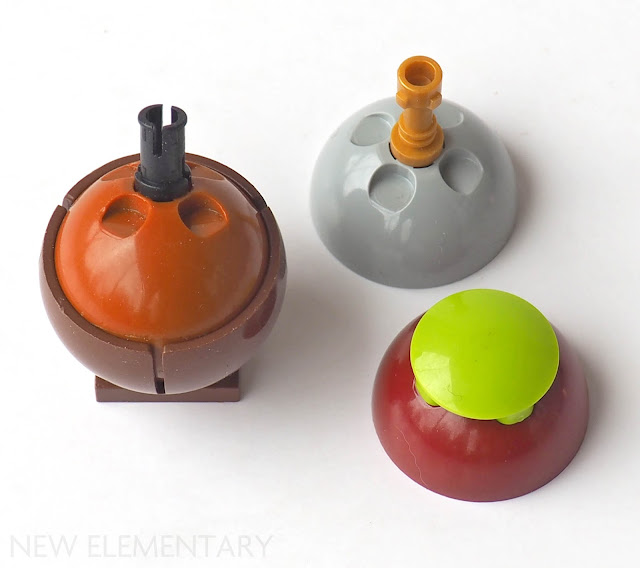 The ball socket has a weird pin/stud hole and four sort-of antistuds, and has some friction but not enough for limbs on large figures. It’s also hard to connect anything on the underside of 44359, which means the connection is limited to the weird connection points of ball’s surface, and these don’t enable any load-bearing connections.

However, 44359 is not the only piece that fits inside the socket. If you allow very slight stress to pieces (and in fact it’s impossible to fit the 44359 ball inside without stressing the socket temporarily), any round 3x3 part should fit inside. 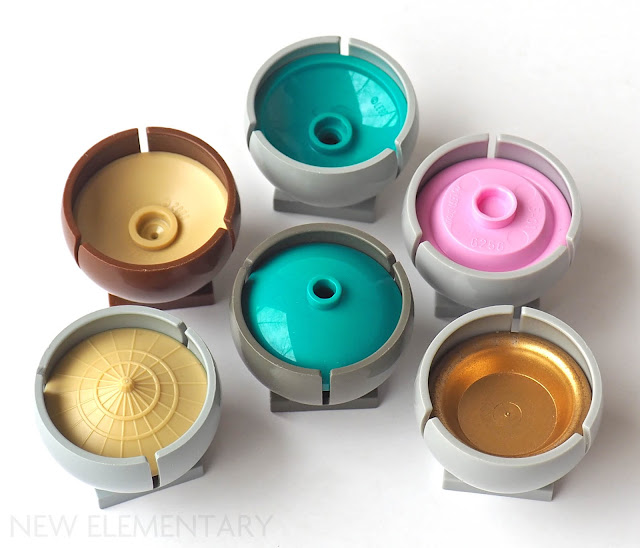 Examples above are the straw hat (93059), the 3x3 dish (43898) and minifigure utensil dish (6256). The 3x3 dish is the most versatile, with its bar-hole connection and stronger friction within the socket. The connection is also inside the joint, making it easier to set the limb inside the socket, like on my Dwarvish Dragonguard below. 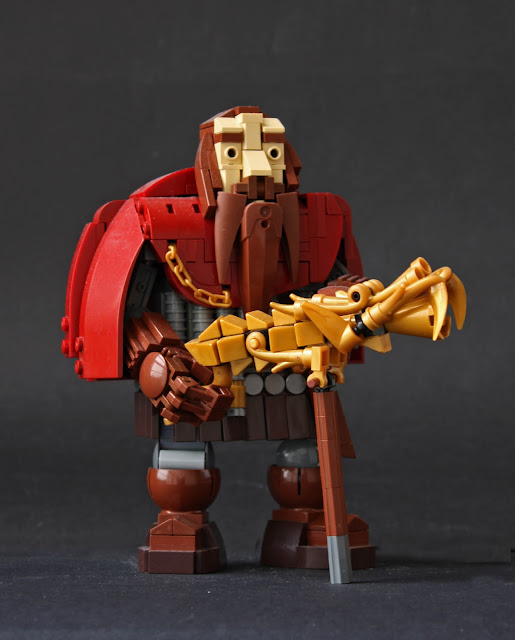 And for my Slalom Probemaster robot (2019), trans-yellow boat studs are connected inside the dishes to create goggle-like spotlights: 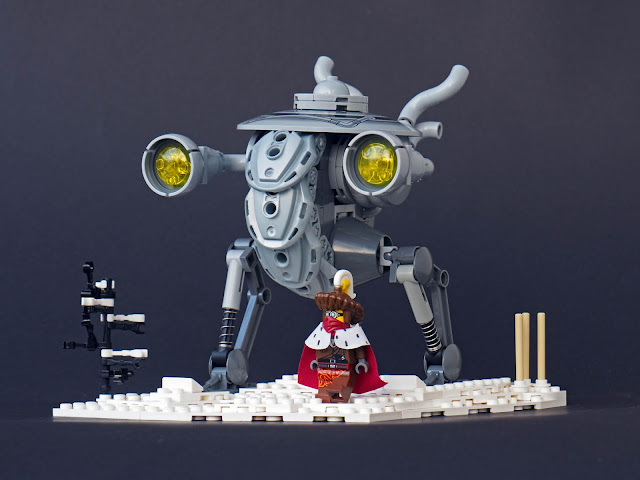 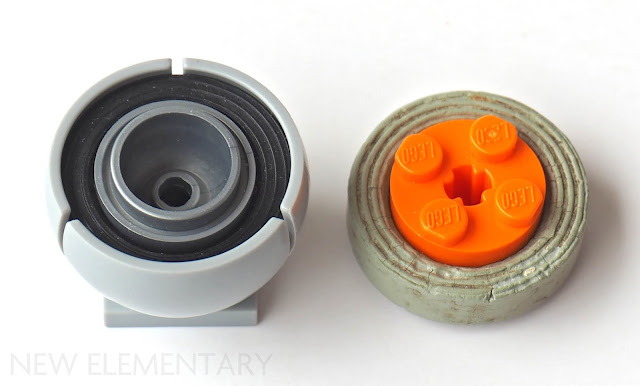 Using the old small smooth tyre (132) which appeared in sets from 1959 until 1977, you can connect smooth and small pieces like 2x2 dome pieces or 2x2 round bricks. 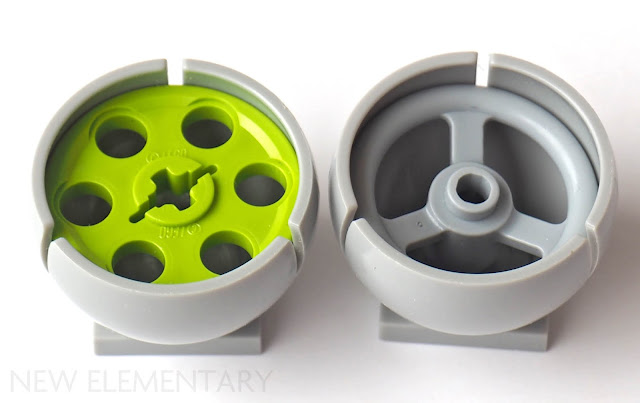 Technic wedge belt wheel pulley (4185) fits, but stresses the socket a lot, so I wouldn’t recommend it. Steering wheel (30663) is very loose but makes for an interesting pattern. 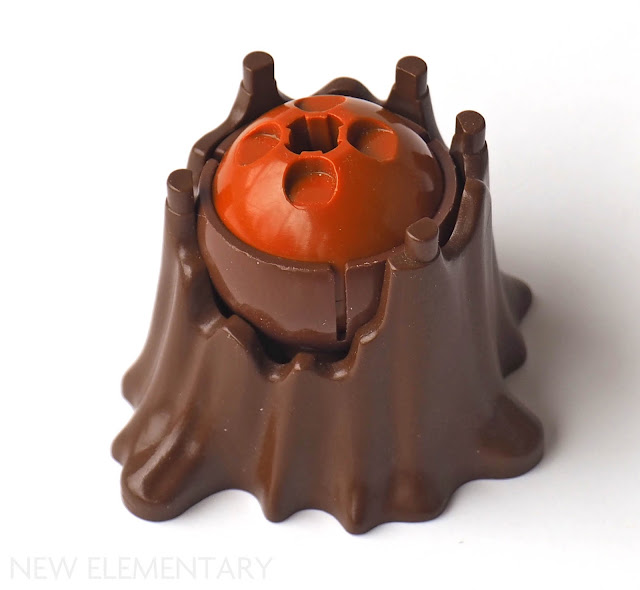 The full socket can also be connected inside the tree stump in old brown (30131) from 1997 Western sets; this connection, I believe, was spotted by Karf Oohlu several years ago. 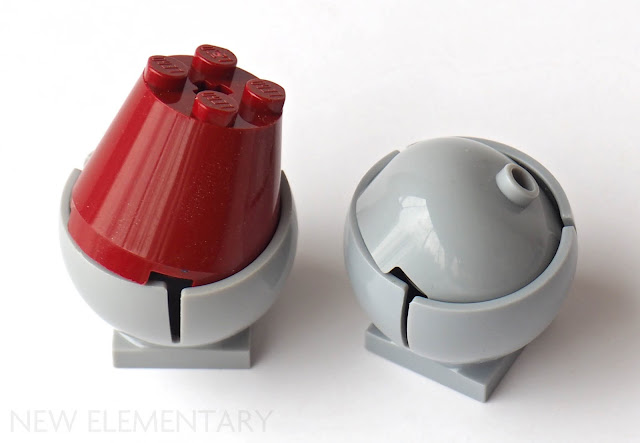 However some 3x3 parts do not fit, including 3x3x2 cone (6233) and 3x3 dome (49308). The latter piece featured in one of our parts festivals back in 2019 and so you can get further inspiration about using this dome from Mansur “Waffles” Soeleman, Peter Ilmrud, myself as well as Andreas Lenander who was inspired to create 3 builds from it! 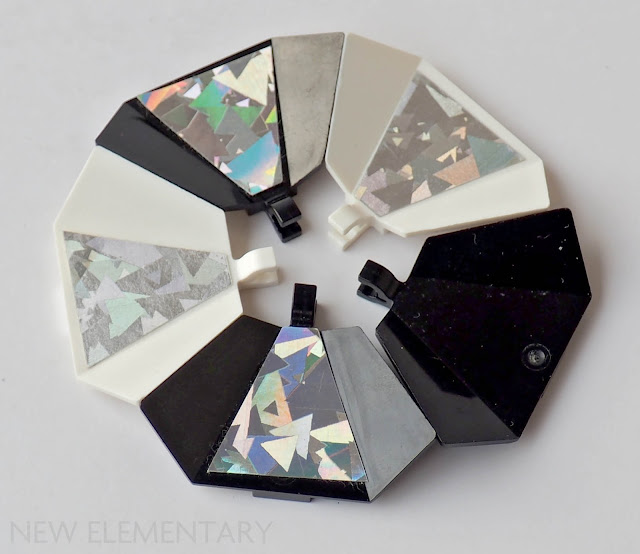 One of  the 1990s weirdos is Panel 3 x 5 Solar/Clip-On/Deltoid (30034), which was produced in black and white from 1996 to 2000, originally for the Space subtheme Exploriens but followed by UFO and Roboforce, plus a special guest appearance in Star Wars 7171 Mos Espa Podrace. The piece is usually stickered with holographic chrome detail. 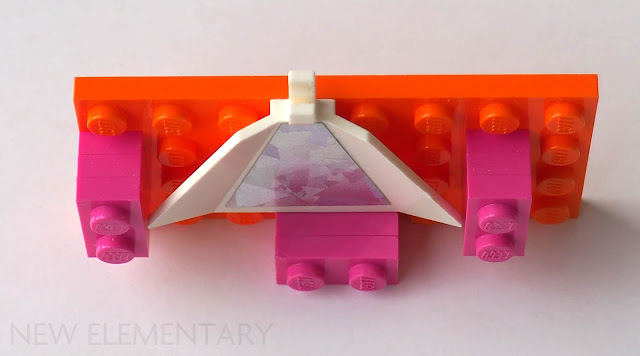 There is a vertical clip on the end and three antistuds on the bottom; the shape approximates a hexagon with sides slightly angled upward. The height on the sides is three plates and the piece is unusually five studs wide. 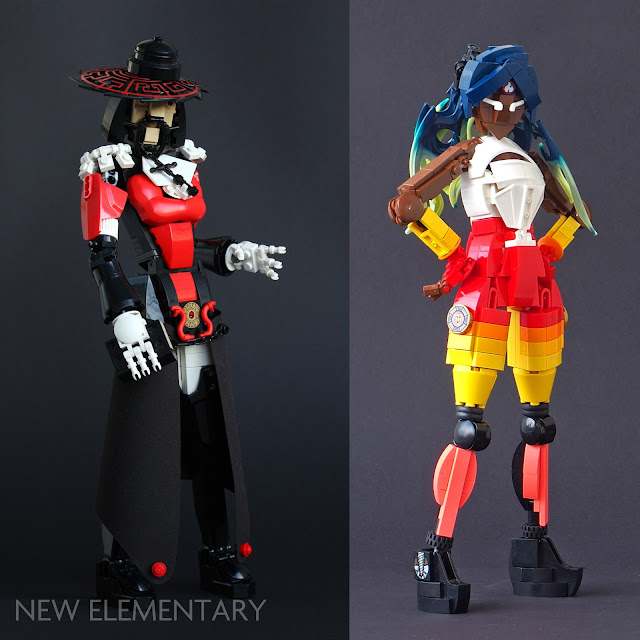 Overall, it’s a thin and unusual piece, and I like it. It’s not anything technically amazing, but overlooked and rare in fan models. My applications include a clerical collar on Reverend Frantic (2018) and tucked-into-trousers shirt on Aurora Sievert (2020) above, as well as a neck-strap dress on Zinnia Superfuzz (2019) below: 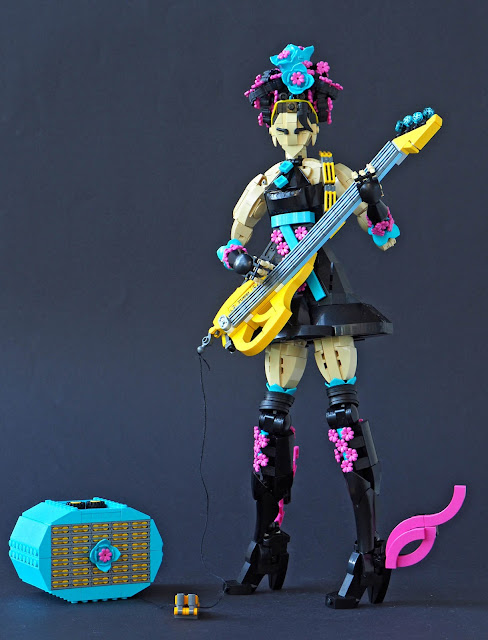 Posted by: Admin Posted on 7/12/2021 08:55:00 am
Email ThisBlogThis!Share to TwitterShare to FacebookShare to Pinterest
Labels: MOC, Old parts, Technique