Aron Gerencsér (@_pohaturon) reviewed LEGO® Monkie Kid sets 80018, 80019, 80020, 80021, 80022, 80023 & 80024 earlier this year and now, as promised, he presents MOCs he created inspired by the new elements in the range. If you're getting Monkie Kid sets from LEGO.com, please consider using our affiliate links, New Elementary may get a commission: USA | Australia | UK - for EU countries 'Change Region'. Products in this article were provided by LEGO; the author's opinions are their own. 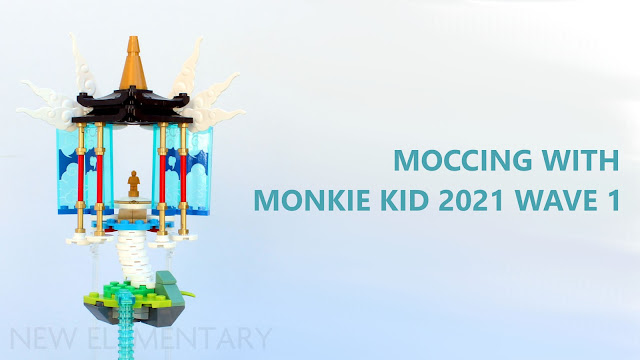 I recently had the chance to review the first wave of LEGO® Monkie Kid sets released this year, which brought many new interesting recolours and a couple of new moulds to the table. While we took a closer look at the pieces themselves in the respective reviews, the best way to show off new bits is in action, so I’ve built a couple of MOCs to explore their utility!

Without further ado, let’s look at the builds!

My initial plan for 73682 was to subvert its intended use as a roof element and utilize it as shoulder armour on a character build, but I got sidetracked by what began as a tablescrap. Back when I reviewed 80015 Monkie Kid’s Cloud Roadster, one of the MOCs was an Asian-inspired shrine, and I decided to keep the tradition alive. 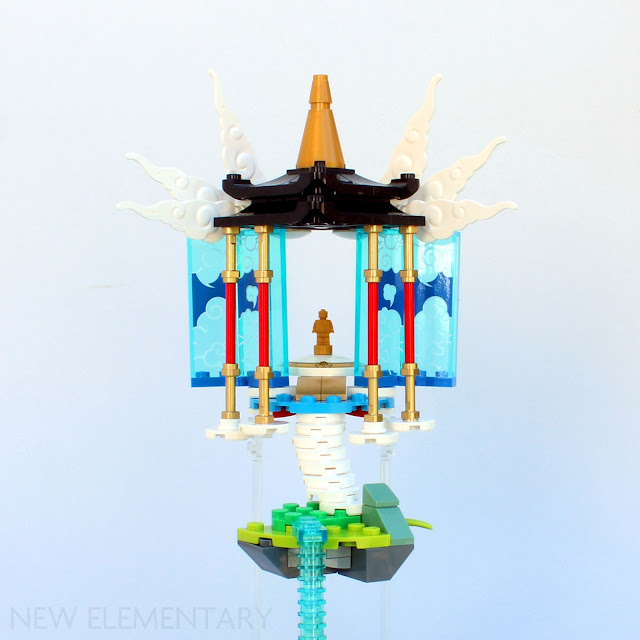 These new corner roof pieces definitely lend themselves well to the pagoda look, as evidenced by the front facing facade on 80022, and the cloudy stickers from the arcade side-build from 80021 complemented the aesthetic nicely. I implemented the printed dish used on the Lion Guardian’s drums/missile launchers as a dais here.


The recurring red and gold Bo weapon that you’re prone to find in most Monkie Kid sets reminded me of decorated pillars at this scale. Building something so System-heavy and at microscale is definitely a mile out of my usual moccing comfort zone! 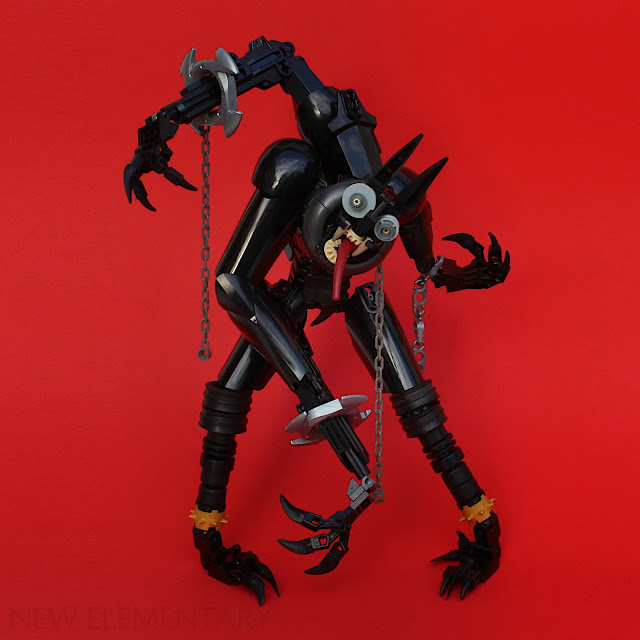 Taking things in a wholly different direction is the Scorned Wretch, utilising the new bent bar holder piece as fingers and toes. When these new sets were revealed and we caught a glimpse of 72869, the initial reaction of “new fingers!” in the building communities I frequent was tempered by its fixed angle. In most cases the new parts would look a bit unnatural as fingers as a result, unless they’re used in a balled fist... or deliberately as somewhat unnatural and contorted digits.

The gunmetal ‘maxaroni’ in 80019 are a definite highlight of the set and I just knew I had to use them for an eventual MOC, but at the time I had no idea what I’d use it for - it isn’t like the bar holders or the roof corner where you look at it and you instantly get an idea for it. 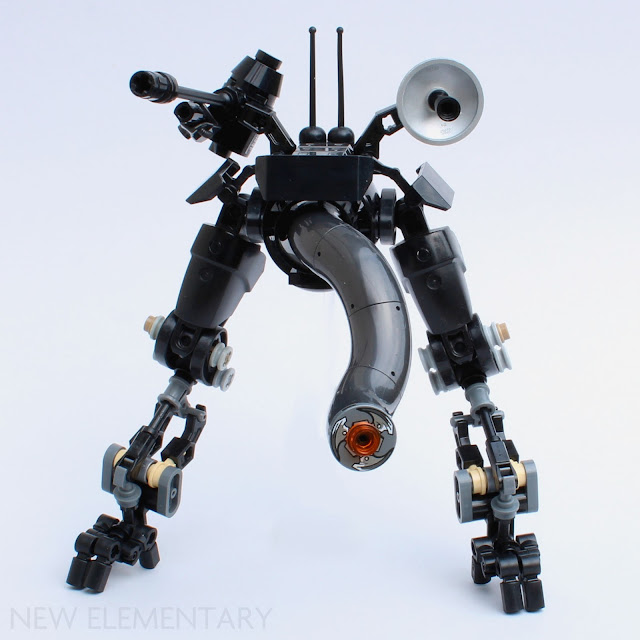 After messing around with parts for a bit I ended up going with a smaller counterpart to a previous MOC, Komondor. This model is intended to be a smaller, more mobile scout unit with an extending eye on a flexible armature, which is where the maxaroni came into play.

The bar holders make a return on the feet, and throughout the MOC I incorporated parts that, while not new, can be found in the inventories of the 2021 Monkie Kid sets, such as Armor For Hand W/Ø 3.2 Shaft in Pearl Dark Gray/Titanium Metallic (6168708 | 28803) on the weapon. 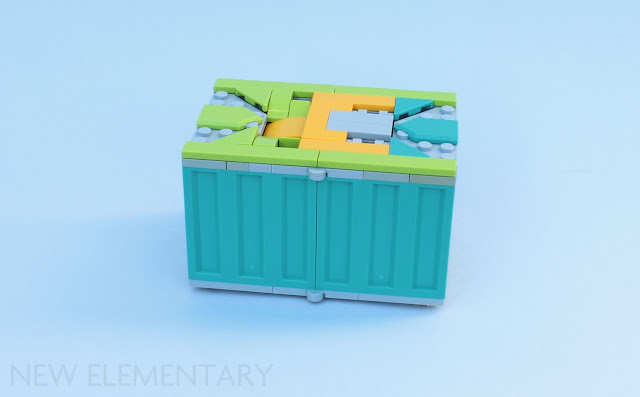 No, this isn’t a seafood themed dinner dash service - though that sounds like a neat startup idea. This MOC is a veritable smorgasbord of inspiration, as the idea came from the opening container sub-models from 80023; artist and fellow builder Yannick Godts’ “Tropicon” designs (themselves coming from a LEGO inspiration); 52Toys’ product line of robot animals that transform into boxes, and finally my own love for crustaceans. This isn’t just a colourful cargo container with a needlessly busy roof…

Thanks to hinges and Mixel joints, the container unfolds to reveal a robotic crab - albeit a false crab, since he’s only got 6 legs. 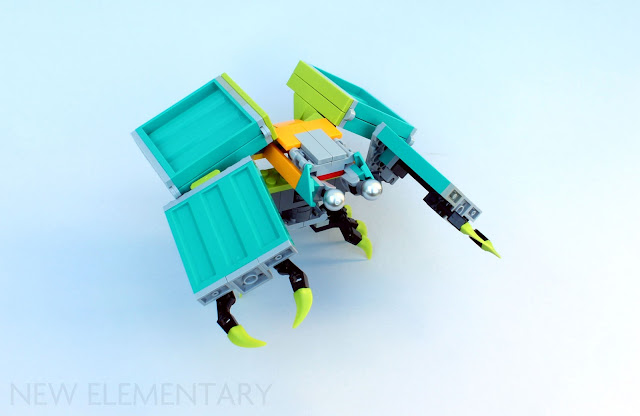 The main challenge here was figuring out how to cram a crab in there so that the container closes flush, without any partsforming involved. I went through several iterations before settling on the three layers of rotating inner structures which finally let me tuck everything inside properly without causing the Wall 1X6X5 Container in Dark Turquoise (6337306 | 23405) pieces to be either unseemly on the crab mode or wonky in container mode.

If you want more detail on the parts or original sets, check out my original reviews:

Posted by: Admin Posted on 7/05/2021 05:41:00 am
Email ThisBlogThis!Share to TwitterShare to FacebookShare to Pinterest
Labels: MOC, Monkie Kid