Eero Okkonen (@eerookkonen) casts his critical eye over the architecture of LEGO® Friends 41449 Andrea's Family House today, before creating a brand new model inspired by some of its parts. Buying this set? Consider using our affiliate links, New Elementary may get a commission: USA LEGO Shop | Australia LEGO Shop | UK LEGO Shop/for Europe 'Change region'. Products in this article were provided by LEGO; the author's opinions are their own. 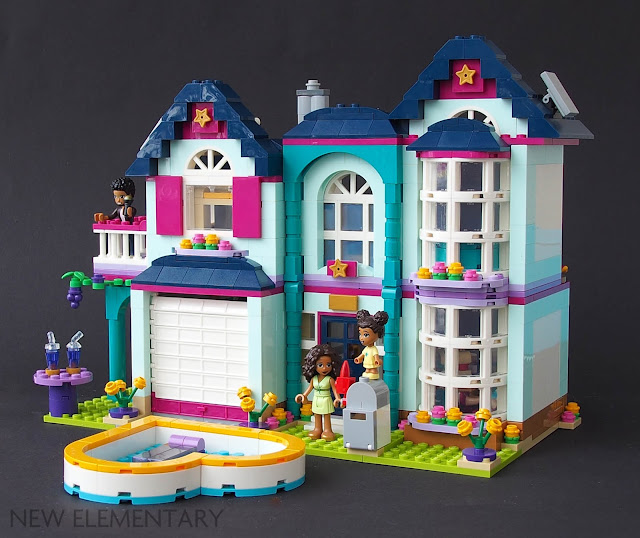 41449 Andrea's Family House - released in January 2021 - adds a new building to the series of homes inhabited by the main characters of Friends. Let's analyse its architecture and interesting parts before getting creative with the parts. 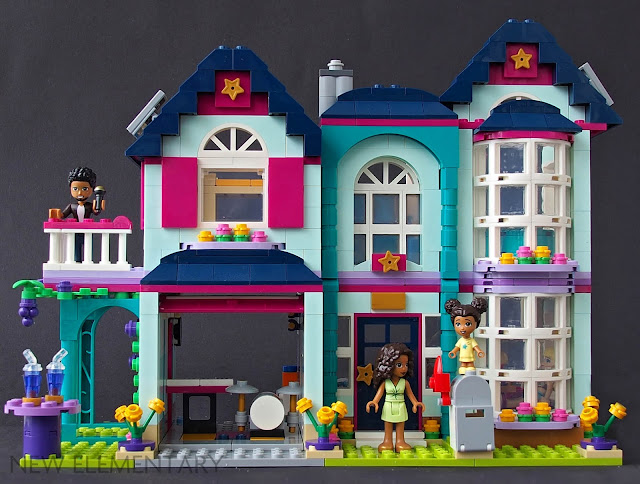 The building seems to be a postmodern mix of vaguely classical features, rationalistic bay window and romantically manifold roof. It is something that, stereotypically, an architect hates and “common” people love. Trust me, I know this. I think the pilasters at the main door fit the Friends aesthetic well, and the bay window is very charming… but overall, it’s too random and oddly balanced for my liking. The roof shapes do not work well with each other, and being very two-dimensional doesn’t help at all. In general, the massing and the facade lack hierarchy. I’m also baffled by the roof of the bay window, which almost completely obscures the arch window behind it, under the right gable. I thought I had made an error during building but that was not the case. 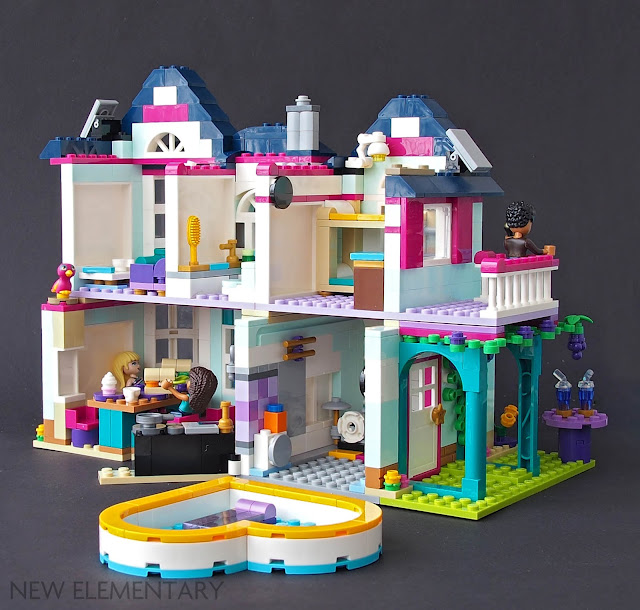 The back view has even less serenity. Maybe it isn’t a problem; it’s fine for a play set to have all sorts of things around. But still… the walls, which consist mostly of light aqua bricks and 1 x 6 x 5 panels, cry for some uniformity, something for an eye to rest upon; and the roof, which ideally would be the symbol of comfort and shelter, is reduced to mere gables and eaves. This, too, is likely due to playability and budgetary reasons, but it severely cuts the homeliness of the building. The architecture feels incomplete. 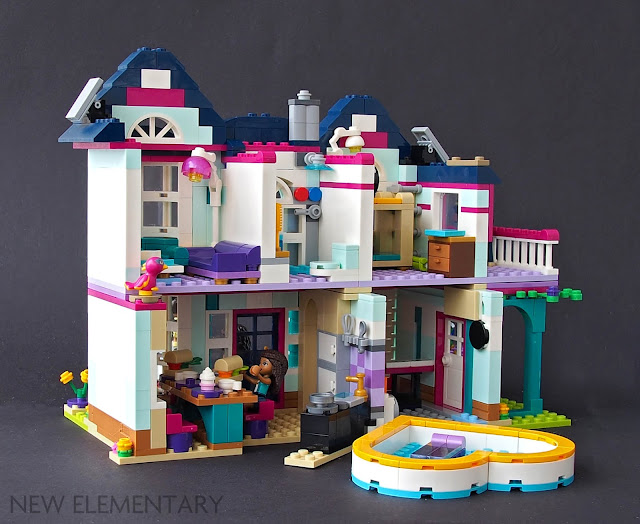 It’s not all bad, though. The selection of rooms is nice: there’s a kitchen with a swinging sink, a garage for band practice, living room, bathroom (curiously behind the big window above the entrance - but that’s okay as we get Transparent Brown Opal/Satin Trans-Black window panels) and a kid’s room. Omitting the stairs works well, but a door to the balcony would have been nice. This family is also actively cutting their carbon footprint: They have a couple of solar panels where the roof would be, if there was a roof, and they have given up their personal car for rock’n’roll. Great! The garage door function is smooth and satisfying, as always. 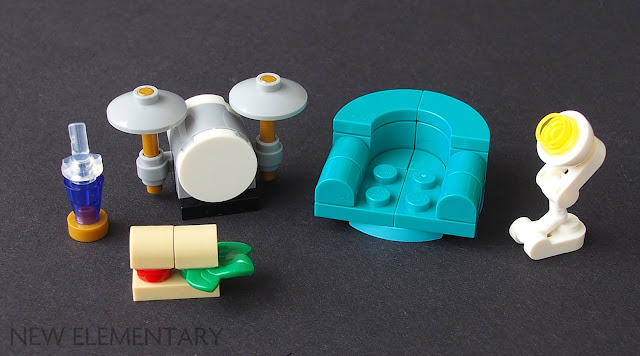 The best parts of the build are these sub-assemblies: I especially like the bread! 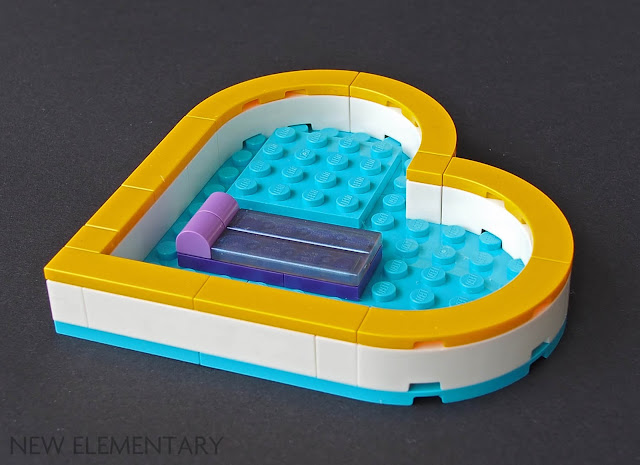 Aside from the main residence there is also a heart-shaped pool as a side build. Transparent Brown Opal 1 x 4 tiles (more about them later) work nicely as the air mattress, but the essential 4 x 4 plate in the pool is more than jarring; I would have preferred this structural element under the pool rather than within it. 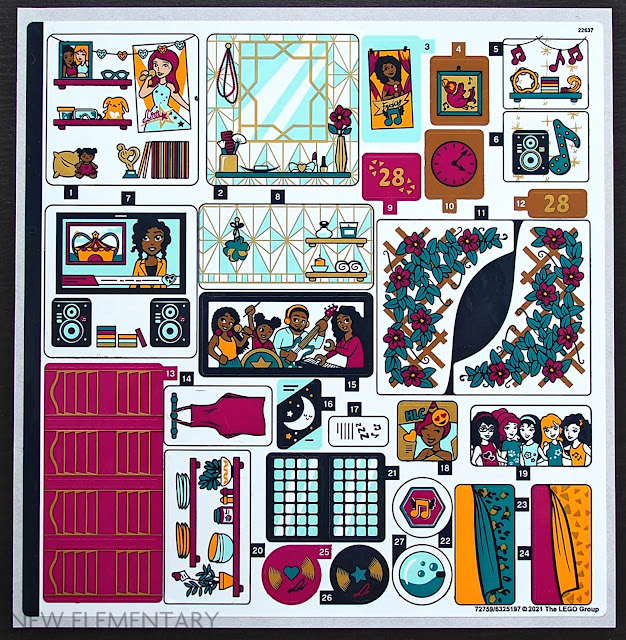 It is also worth noting that I didn’t apply the stickers, which affects the look of the interior. Some of the stickers are nice and useful, and I’ll surely use these later on, but I dislike the big stickers designated for 1 x 6 x 5 panels. Their size makes them hard to repurpose on other pieces; for example the “Liv” poster on 1. would have been useful on a 2 x 4 tile. Also adding details like loudspeakers as a mere image of them feels dull.

There are five figures: Liz, Donna, Martin and Andrea plus one wee bird and, as a special guest, Andrea’s Friend Stephanie (in the middle). Liz is a microdoll, similar to the figures in Disney Storybook sets; she felt a bit creepy at first, but now I think she’s fine. Her hands are 1.5mm pin-sized, which means she can mostly just terrorize the garden by pulling out grass stalks. 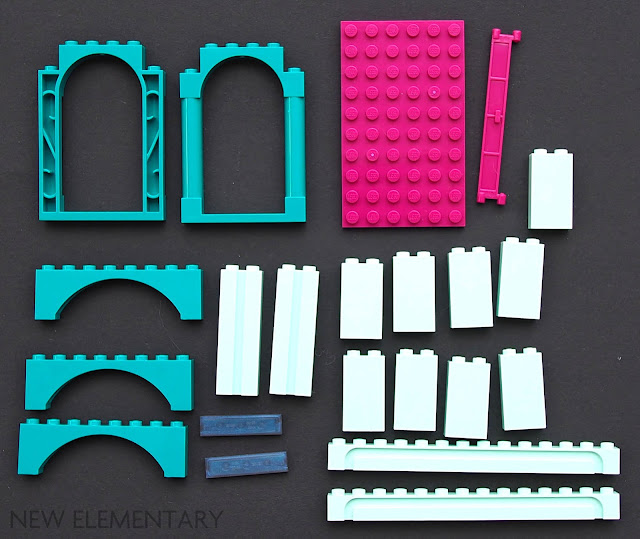 The unique pieces in this set (not including the minidoll parts) are: 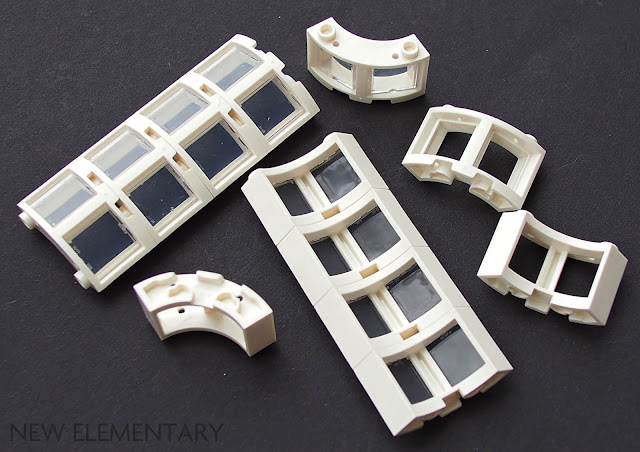 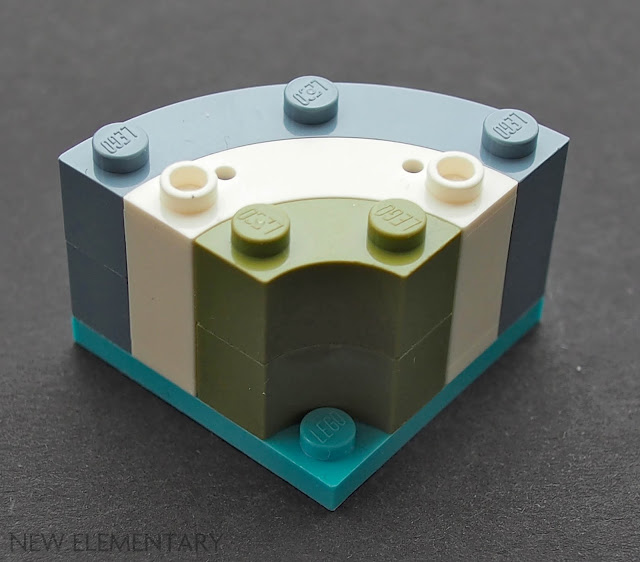 Their curve matches the classic macaroni bricks perfectly. They are designed for usual small pane Glass for frame 1x2x2/Glass for Window 1 x 2 x 2 Flat Front (35315), or alternatively Bars For Frame 1x2x2/Pane for Window 1 x 2 x 2 Lattice Diamond (38320) as used on the only other current set that includes the White frame - 41447 Heartlake City Park, containing 4. Reddish Brown ones appear in 76389 Chamber of Secrets and 31220 Medieval Castle. We’ll return to the architectural possibilities of this exciting part in a later article.

Speaking of window panes, this also includes six in Transparent Black Opal. They make a return from 43179 Mickey Mouse and Minnie Mouse, where they were used as film panels. They have a sort of purple-ish glitter glow… in certain lighting. Against light they appear muddy brown. They’re quite cool. 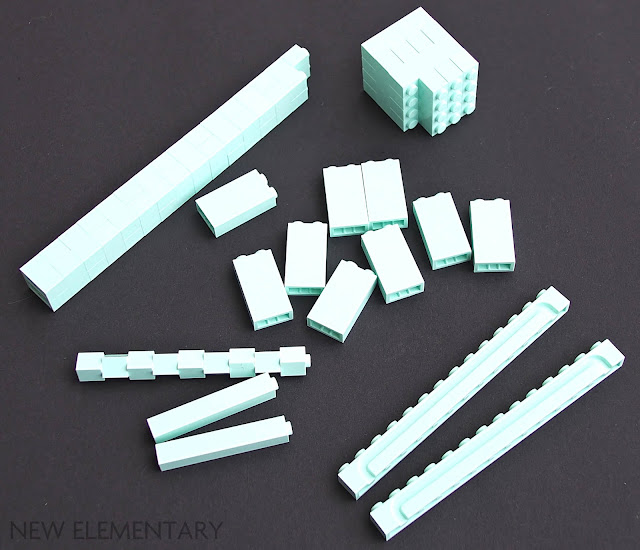 The set also includes a substantial assortment of Aqua/Light Aqua pieces: 70 in total, including the grooved pieces. (Due to a humorous error by your author, 1 x 2 x 5 groove bricks are not in the photo.) It’s a definite starter kit for those who have always wanted to make aqua buildings! 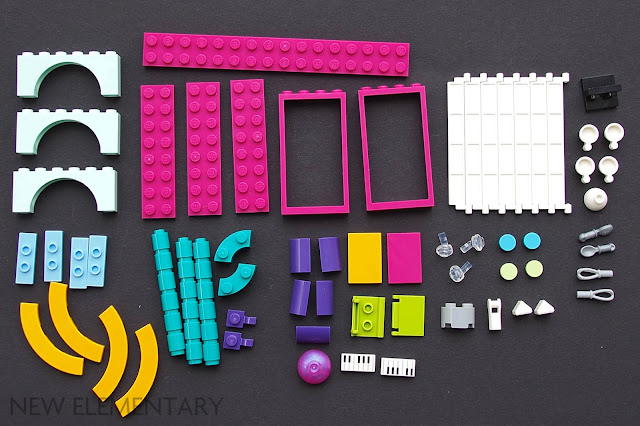 Pieces pictured above are unusual, rare or interesting, but not unique. Remarkably the white garage door panels, 7 included, last appeared in 1994, in the Town set 6571 Flame Fighters. 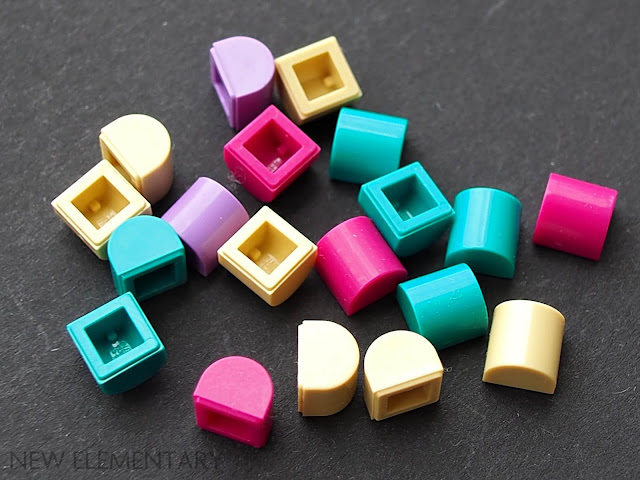 I was also pleased to find 19 x Plate 1x1x2/3 Outside Bow/Slope Curved 1 x 1 Double in various cool colours. They’ll prove useful for sure.

You could have expected an architectural model from me with this set, but my urge to build characters was too strong. So here’s Virva Staccato. 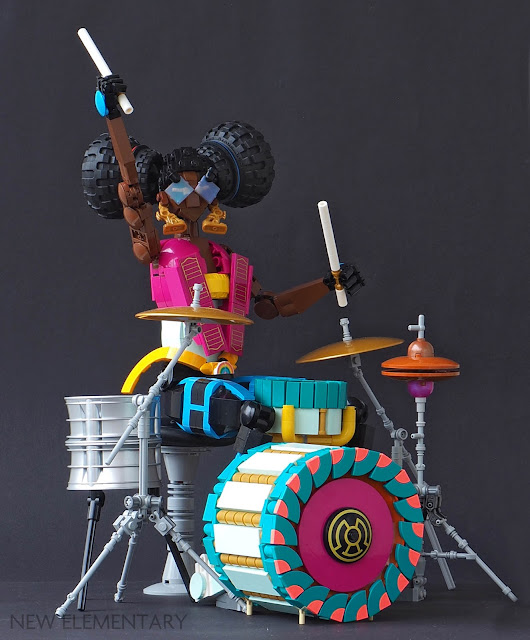 She’s a drummer, part of a series of large-scale musicians I’ve been building recently. The MOC was inspired by the subtle musical theme of Andrea’s family home; there is even a small drum kit in the set!

Often action figures - including custom brick-build ones - are some sort of warriors with little plastic weapons of destruction. However, violent themes feel a bit overused in figure builds, and I constantly try to find alternative ways of defining characters. Musical performance is a great way - instruments, despite being gadgets of sound, are very visual objects and in an intrinsic contact with their players. The drum set here consists of floor tom, snare, hi-hat, bass drum - using Aqua bricks and Dark Turquoise round bricks from the set - and two crash/ride cymbals. 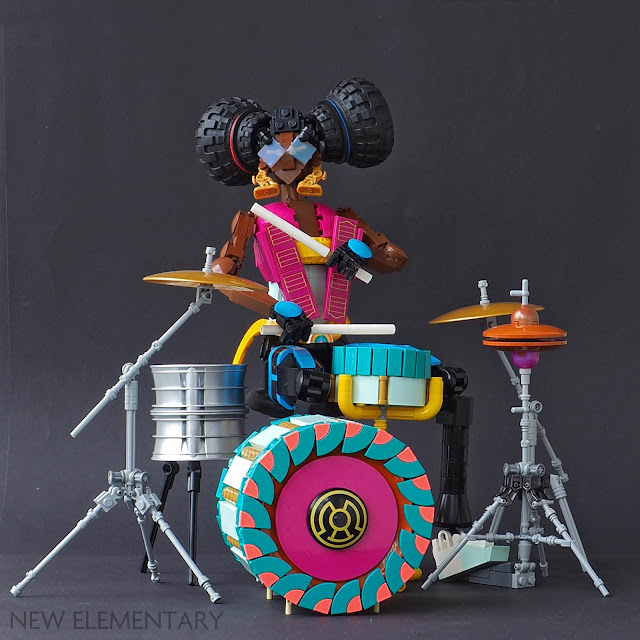 Theme aside, I took inspiration from some of the colours of the set: Aqua, Light Bright Orange, Dark Turquoise and Magenta. I think those colours work better on this vibrant performer than on a family home. But I’m not complaining - I’m happy that the set included these colours! I also applied the stickers of (cosmetic, non-functioning) window shutters to the jacket as their golden pattern is so good. 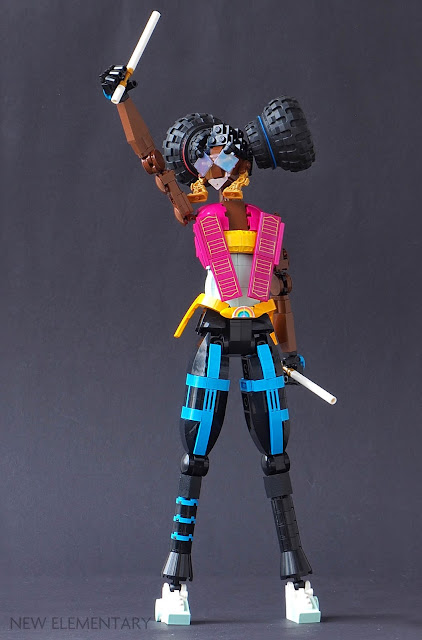 However, the original idea was just to use Satin Trans-Black window glass panes as sunglasses. I think they work very well, showing enough of the eyes behind, while feeling unique. They’re connected snugly with lever bases.

41449 Andrea's Family House is a playset, and fits this function just well: The spaces are diverse and the details numerous. I’m delighted by the garage housing musical instruments instead of a personal car. But as an architectural work - or a display piece - it lacks serenity and hierarchy of elements. It doesn’t feel quite finished. However, I believe that the main target audience is not disturbed by this. 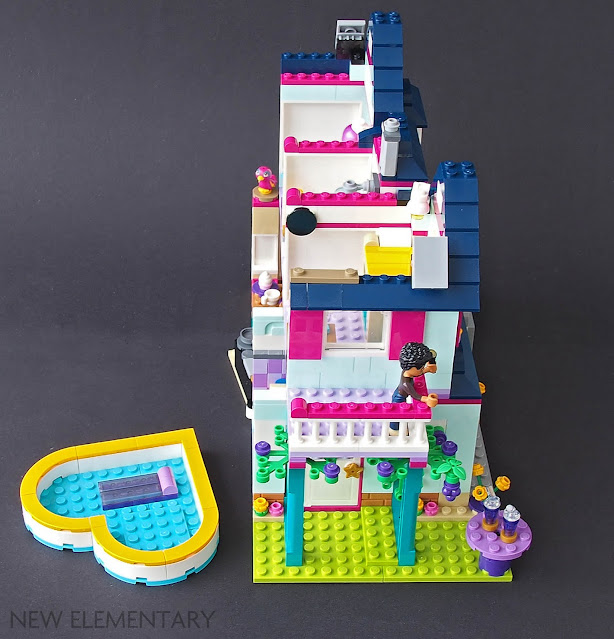 As a parts pack, 41449 is a good set. The new round window frame is the main attraction and the steady supply of aqua could attract some buyers. The recolours are not revolutionary but nice nevertheless. The colour scheme makes the house a bit chaotic, but I can’t complain: the colours are somewhat unusual and packed with energy, freshness and other adjectives associated with Heartlake City!

If you enjoyed this article and are buying this set, consider using our affiliate links, New Elementary may get a commission: USA LEGO Shop | Australia LEGO Shop | UK LEGO Shop/for Europe 'Change region'.

Posted by: Admin Posted on 7/23/2021 08:28:00 am
Email ThisBlogThis!Share to TwitterShare to FacebookShare to Pinterest
Labels: Friends, MOC, Set review