The LEGO® VIDIYO™ theme launched in March 2021 with a series of six BeatBoxes, similar in size and shape to the LEGO Friends play cubes, along with a collection of 12 different BandMates supplied in blind boxes. In the second wave which will be available from 1st June, two more BeatBoxes will be released, along with five larger buildable sets. The LEGO Group sent us the two new beat boxes to examine, and I have added components from the first wave releases from my own collection so that I can give you a comprehensive rundown of the new moulds and colours available to AFOLs. It is easiest to list the sets here first, and I will just use a short version of their name later in the article: 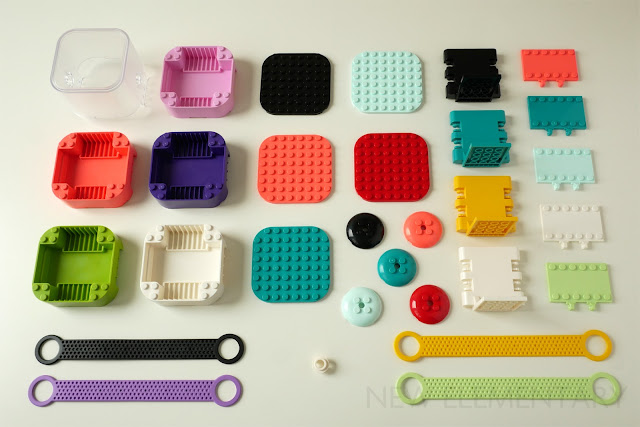 As you can see from the image, there are a wealth of new elements to discuss, some more useful than others! Common to all of the BeatBoxes is a transparent top for each pod, a base which this clips into, in one of five colours, a curved-corner 8x8 plate in one of five colours, a right-angled hinge bracket and two hinged plates (in 4 and 5 colours respectively), a rubbery strap in a selection of 4 colours and a couple of 4x4 dish pieces (5 colour options) which help to hold the straps onto the pod top by means of a new turntable base with clips. Hopefully the following table will give you a clearer idea of which piece comes in which colour in these eight different BeatBoxes.

Most of the new elements are included in two or sometimes three BeatBoxes, but a handful only appear once. In addition to the above, three of the components also appear in the larger buildable sets in the June 1st wave of VIDIYO:

The other two elements which are not unique to the line are:

One of the things which excited AFOLs about the new VIDIYO theme was the inclusion of many printed tiles, known as BeatBits. The original wave of BandMates saw one unique tile per BandMate and two more randomly selected from a pool of 80 different designs (not shown) - see our BeatBits Guide for more information.

Each BeatBox from the first wave, and these two new releases, comes with two unique tiles per minifigure, and another 14 selected at random from the pool. All of these BeatBits, when used in conjunction with the accompanying Augmented Reality app, will unlock a unique sound or visual effect. Unfortunately, an update to the app, which may have shown us what the new BeatBits from Metal Dragon and Folk Fairy might do, was not available at the time of writing. Below, I have photographed the minifigures from all the BeatBoxes together with each of their unique BeatBits so that you can see which comes with which.

Minifigures in the VIDIYO BeatBoxes

At present, all of the main components of the minifigures are unique to the VIDIYO line. 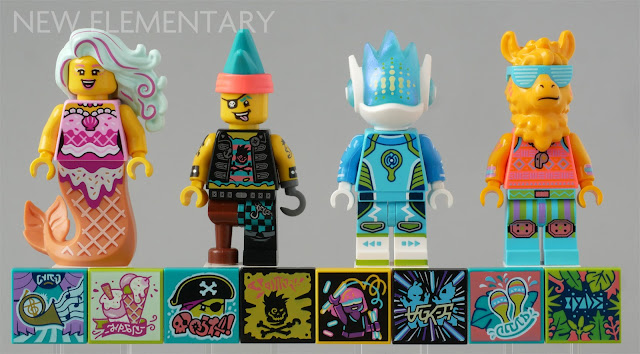 From left to right, the first four minifigures are as follows.

Both the torso and legs have some nice metallic silver printing, and the arms also have tattoo details.

The Alien’s head mould first appeared in this BeatBox in March 2021 but will also appear in  Transparent Green with Opalescence / Satin Trans-Green Visor Pattern in Dark Bluish Gray variant in The Boombox on 1st June, which I have already reviewed. And just like its green counterpart, the blue spiky head shape does glow under UV, although it is not a very strong effect. 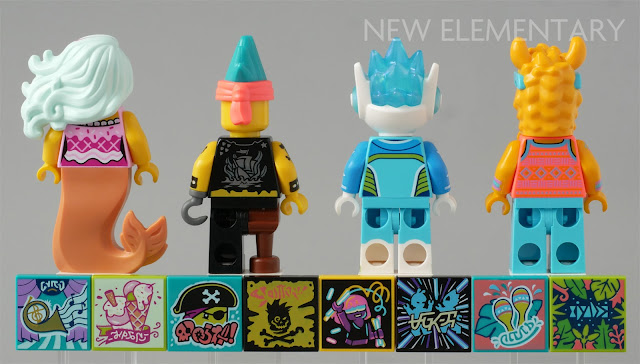 The reverse of each minifigure also has printing on the torso, shown in the image above. 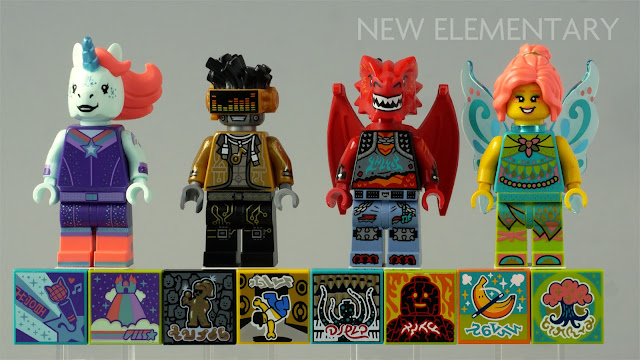 From left to right, the last four minifigures are as follows.

The last two figures are from BeatBoxes whose online inventories have not yet been published at the time of writing, so I can’t give you quite as much detail about them. 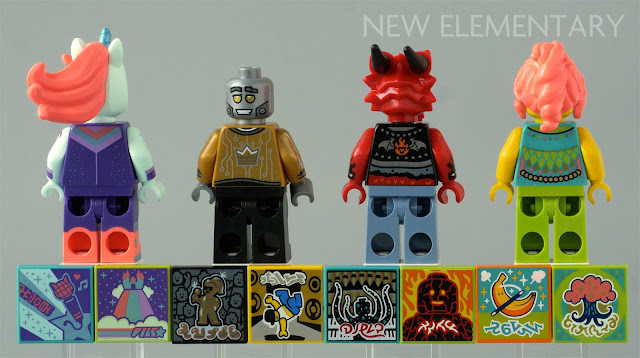 Once again, each of the minifigures has some nice printing on the rear of the torsos - and I have removed Robot’s hair and turned his head around so you can see properly what that looks like too (there is no face print on the rear). 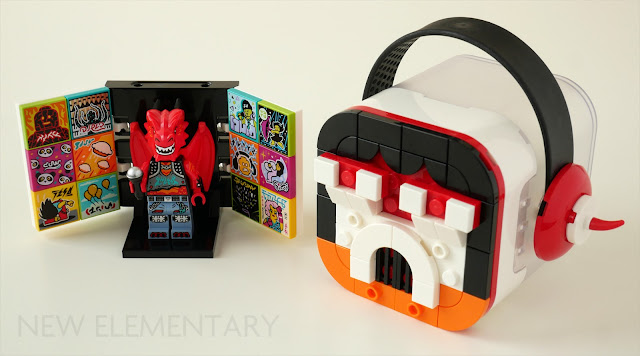 To be honest, the longest part of any of these BeatBox builds is applying the pattern to the large 8x8 plate which sits on the back of the pod base, and prevents the spare BeatBits which you store inside it from falling out. The exact pattern is shown in the instructions, but other suggestions are also made to encourage you to do your own thing. 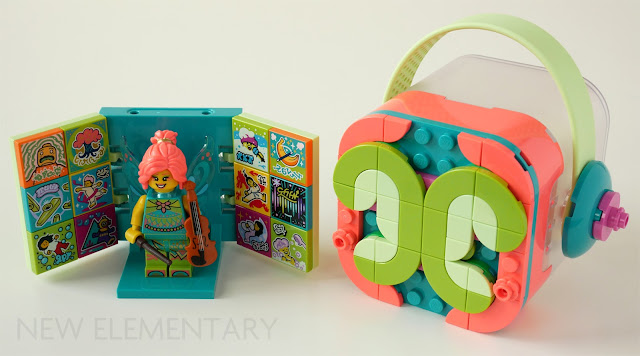 The two 4 x 6 Hinge Plates click into the L-shaped bracket very quickly so that you can arrange 12 of your favourite BeatBits to display, from the selection of 16 which come with each BeatBox. The ends of the flexible strap are captive between the turntable snap which clicks into the transparent pod top, and the 4 x 4 dish pieces on the outside. 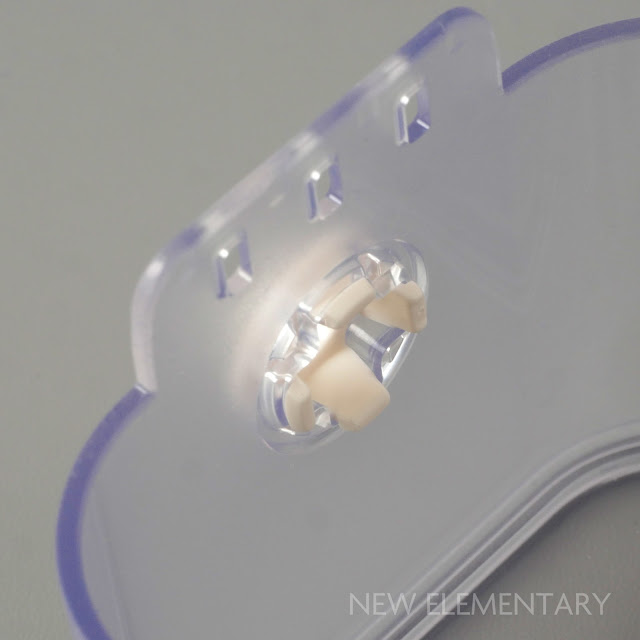 Talking of those Turntable Snap pieces - once they are clicked into the Pod top, they are pretty hard to get out again. You have to get both your thumbs inside the pod and try to push simultaneously against two adjacent clips which are very stiff. Nothing happens for a while and then the snap pings across the room at great speed and you are left with dents in your thumbs. I’m not sure how many kids will manage it without hurting themselves. 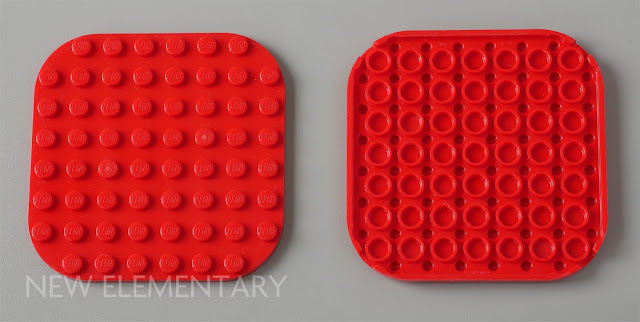 There is nothing very remarkable about the rounded-corner 8 x 8 plates which are new in this theme, except to say that they have a cutout under the edge of each corner so they can be attached on top of a larger plate without fouling any of the studs below. The corner radius is the same as existing 2 x 2 macaroni bricks and tiles. 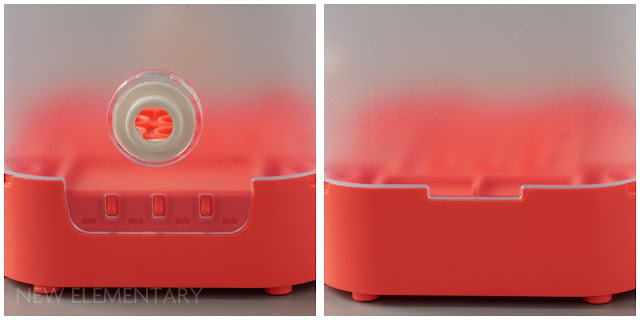 The pod tops clip into the pod bases by means of two long tabs on opposite sides, just below the holes for the turntable snaps. Small bumps on the base click into three cutouts of the tab. In order to remove the top once it is attached, you need to gently squeeze the two opposite sides with the smaller tabs - something which is not very obvious at first, but once the strap is attached, it is almost the natural thing to do because you can’t get your hands around it easily the other way. 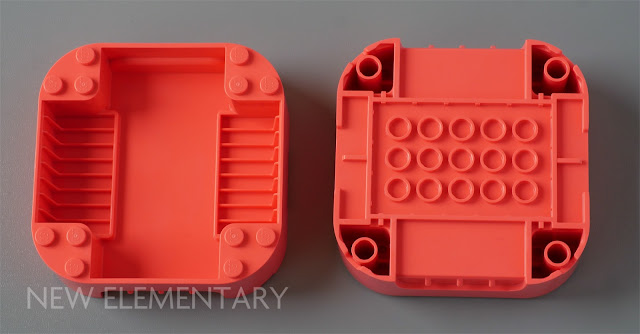 The area of the pod bases is of course identical to the 8 x 8 plates previously shown, but the available studs on top and below are somewhat different. The pod top actually attaches to the anti-stud side (bottom) of the base. The L-shaped bracket that the minifigure sits on has several studs on its rear to attach to the anti-studs of the pod base, which offers just the area of a 4 x 6 plate in the middle, and space for three anti-studs at each corner. Meanwhile, the other side is really the “top” of the base, with just three studs at each of the rounded corners. The spare BeatBits slip into the 8 slots on each side of the container - but they are a very loose fit and only stay in place once the 8 x 8 plate is attached to these studs to cover the container. Having tried to make a few MOCs with these bases (which you will see in later articles), I have to say I found it frustrating that all the stuff I wanted to build was inside the transparent part of the pod and therefore had to be accomplished upside down, which isn’t always very easy! 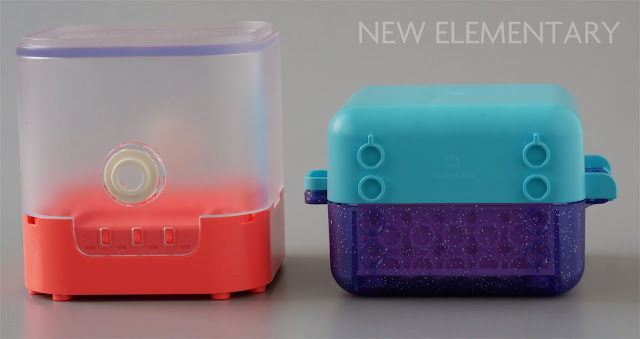 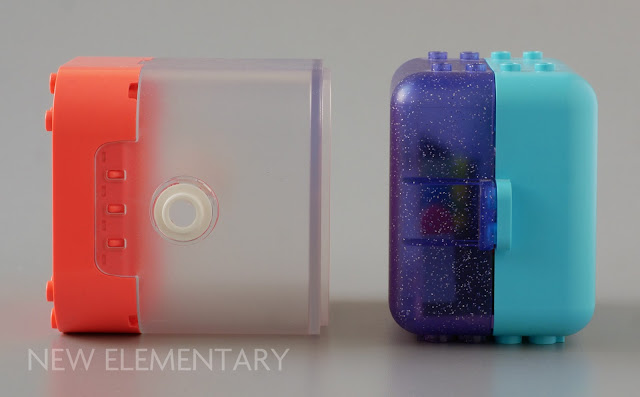 I mentioned the Friends Play Cubes at the start of the article, and I thought it would be useful to include a couple of comparison shots here. As you can see, the base of the BeatBox is a similar height to each half of a play cube, but the transparent top is quite a bit taller. 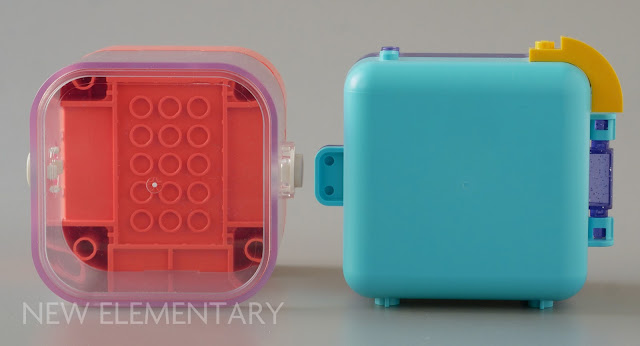 The other significant difference is the corner radius - whereas the outside radius of the BeatBoxes are the same as a 2 x 2 Macaroni brick, the Play Cubes have a sharper radius which exactly fits the inside of Arch 1 x 3 x 2 Curved Top (6005).

The other disappointing aspect of the transparent pod tops, which I feel can limit their usefulness for MOCs, is that only the top surface is clearly transparent - the sides all have a frosted effect which means you can’t see what is in the pod very well, unless you are viewing it exactly head on.

Integrating the BeatBoxes with System builds is not very straightforward - partly due to there only being studs exposed when the top and base are connected together, rather than anti studs which would easily click onto any old brick. And if you just want to use the top without the base, then you have to find a way to connect via the Turntable Snap, or get even more creative. Some of our reviewers will be exploring these possibilities in later articles. 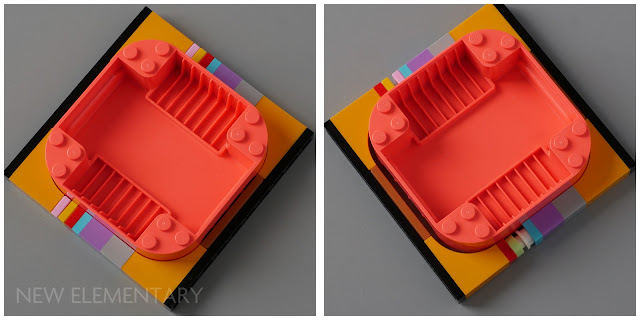 I did a few tablescrap experiments to see how the 8 x 8 with cutoff corners shape might fit in with various System bricks. Arch 1 x 3 x 2 Inverted (18653) is the only curved slope which has a radius matching the corners, and there is no equivalent curve the other way up, so they have to be built facing in opposite directions for each half (first picture above). Two bricks, two plates and two tiles distance separate each slope - you will have to find a way of attaching these assemblies together firmly in the rest of your build, as they are just laid next to each other here.

One trick for such instances is to add a Plate, Round 1 x 1 with Open Stud (85861) back to back with Tile, Round 1 x 1 with Bar and Pin Holder (20482) but in this case it leaves an unsightly gap around one side which is annoying just less than one tile thick. Another useful piece is Brick, Round Corner 3 x 3 x 1 without Studs (65617) which has an internal radius of exactly the right size for the corners, but unfortunately I didn’t have any of these in my collection to demonstrate here.

There are plenty of new elements in the BeatBoxes which offer interesting MOCing potential for AFOLs. Children and adults alike will be captivated by the vibrant prints of the BeatBits, and the colourful characters of the minifigures. I can’t comment on the play value of the app, but the main thing letting the range down is their exorbitant price. The RRP is currently £17.99 / $19.99 / €19.99, with each set carrying around 70-80 pieces. This gives a price per part of something in the region of 25p/27c at worst case. An RRP of half that would seem about right, especially when compared to similar sized items such as the Friends Cubes. I’m sure many consumers are waiting for them to drop in price via third party deals before jumping on the BeatBox bandwagon,

Posted by: Admin Posted on 5/28/2021 09:07:00 am
Email ThisBlogThis!Share to TwitterShare to FacebookShare to Pinterest
Labels: Set review, Vidiyo