Kevin J. Walter (@public.brickstory) returns as our guest reviewer today with a look at LEGO® 10292 Friends - The Apartments, coming 1 June 2021. Buying this set, priced £134.99/ US$149.99/ AU$259.99? Consider using our affiliate links, New Elementary may get a commission: UK LEGO Shop | USA LEGO Shop | Australia LEGO Shop, for other countries 'Change Region'. Products in this article were provided by LEGO; the author's opinions are their own.

The 1990s TV-series Friends is without a doubt a cultural phenomenon and still one of the most watched and streamed shows of all time. For the series’ 25th anniversary in 2019, TLG launched LEGO® Ideas 21319 Central Perk, so it comes as no surprise that Friends: The Reunion, also known as “The One Where They Get Back Together” which aired on 27 May 2021 is being used as an opportunity by TLG to launch the consecutive set. 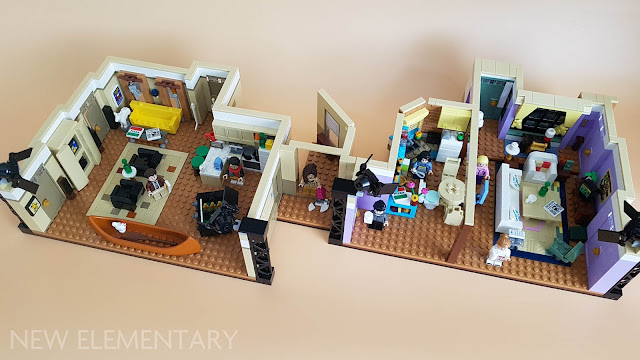 “The One Where They Got Bricked Together!”

The new LEGO set 10292 Friends - The Apartments contains 2,048 parts, 7 Minifigures, a few animals, some furniture and a whole lot of allusions to the episodes throughout the entire series. It comes in the now-usual 18+ box and the instruction manual has an introductory section depicting the background of the set, development and detailed description of the apartments. It covers as well the 7 included minifigs, linking their appearance in the set to certain episodes. While the whole introductory part takes up seven pages, it is very “airy” and not overloaded with text, but I do not like that less space is given to the designer – just one page with a small paragraph of text and a picture of the designer Anderson Grubb, however he is not even named.

Alright, let us dive straight into the new parts in this set. It features no new moulds, but we do get  a lot of great recolours. 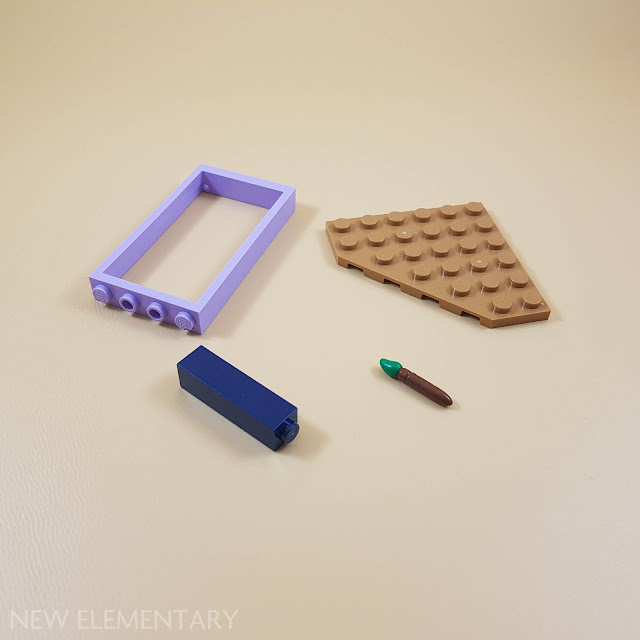 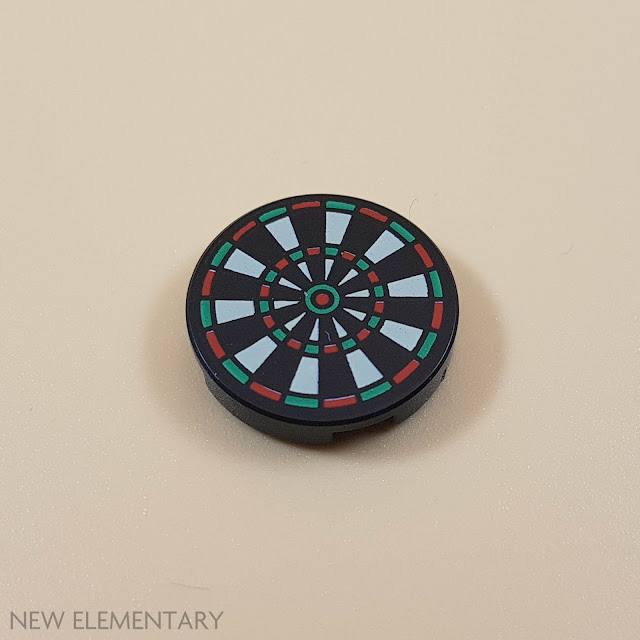 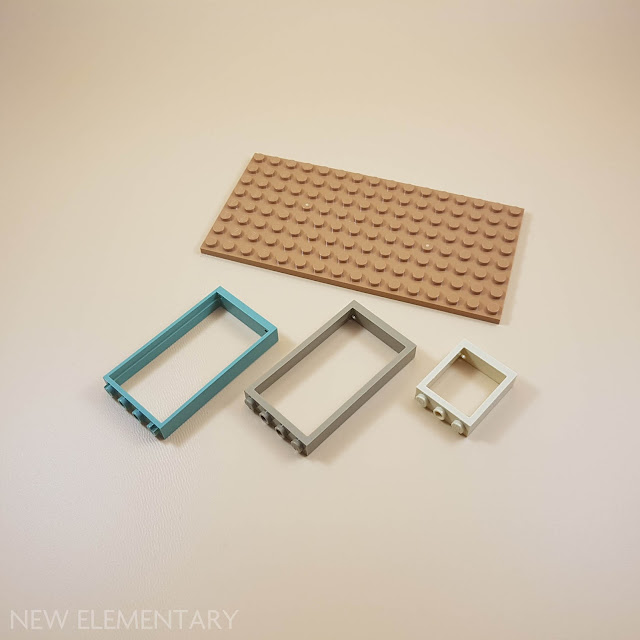 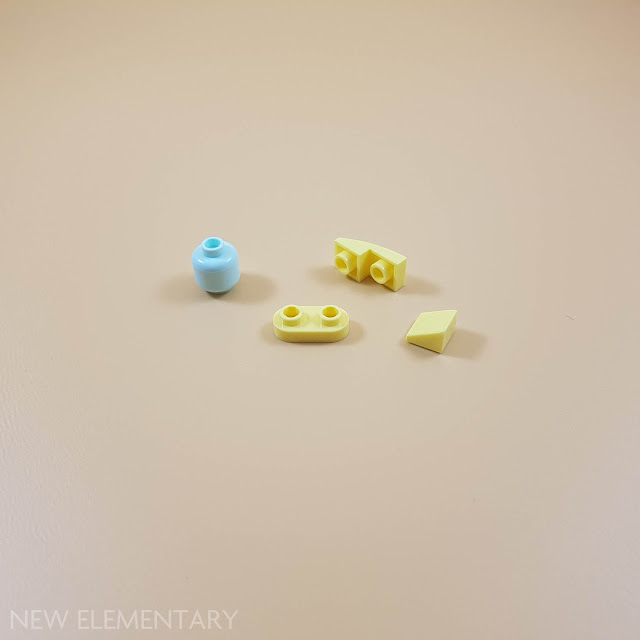 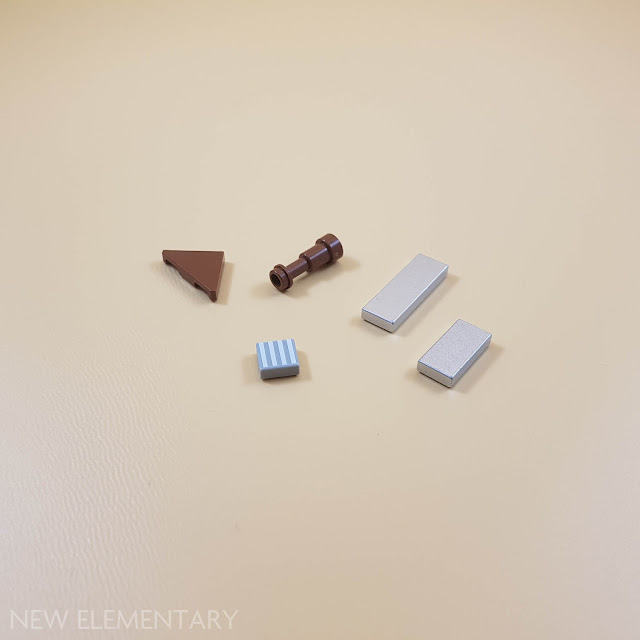 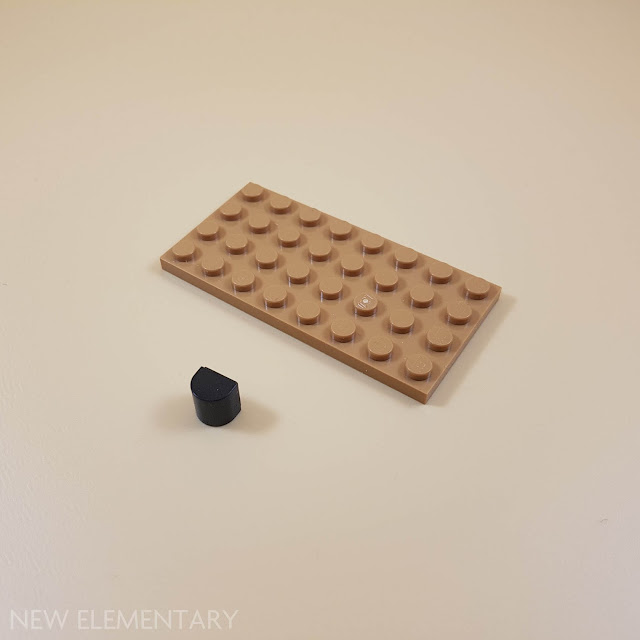 To sum the parts of this set up - The Apartments brings you some nice new recoloured parts. My favourite part is the Canoe in Dark Orange; the best part and best recolour of this set! In general, this set delivers you a wide variety of parts in earth tones, mainly Tan, Dark Tan and Medium Nougat. But it also brings you decent amounts of brighter and contrasting colours, like many Lavender parts and some Bright Light Yellow.

“The One With The Colourful And The Messy Living Room” –

The set follows the same principle as the Central Perk set, being realised as a shooting stage with Traverse headlights, a reflection of the sets of the sitcom itself; a concept that works well for the model.

The first apartment to build is Joey and Chandler’s. Bag 1 starts with the carpet and the two black chairs, bringing you as well the minifigs of the apartment-owners, so you can immediately re-live the iconic scene where both simultaneously lean back in their reclining chairs.

Bags 2-6 form the apartment itself and introduce Janice to us - Oh My Gaaawd! It features one of my favourite parts usages in this set: the use of Cylinder Half 1 x 2 x 1 (68013) as kitchen sink is perfect. Sadly, you are not able to see it very well in the finished kitchen, because it is overlaid by the many surrounding details.  Another nice touch is the table soccer built with the Minifigure, Utensil Statuette / Trophy (90398). Two personal highlights for me, from the perspective of the sitcom, are “The Chick and the Duck”, because I loved the episodes where these two birds were quacking and running around, even though it is a bit disappointing that the duck is represented by an ordinary bird element (41835pb01|41835pr0001). The second highlight is the book you find on the counter beside the door; an allusion to the hilarious episode where Joey buys the “V” volume of an encyclopaedia and constantly uses words beginning with V, whether fitting in that situation or not. 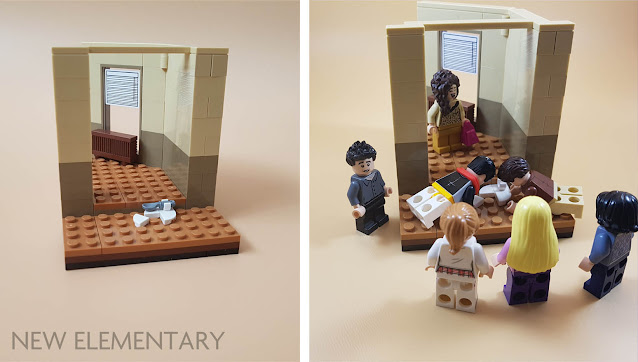 Next up in bag 7 is the hallway that connects the two apartments. Not much to say, so I will drop that cheesecake here and leave the rest up to you.

That brings us to the second, and in my opinion, more interesting apartment: Monica and Rachel’s. Starting with bags 8 and 9, again the carpet and surrounding furniture are created, with bags 10-15 giving the remaining apartment shape. This apartment is not only more interesting because of the greater variety of shapes and colours but also its balcony and the iconic, angled window front.

When I heard the first rumours earlier this year about this upcoming set, my first question was: how will they do the window front? Exactly how I thought it would end up. I really liked the use of the sausage piece (33078) as the curved top of a suggested fire ladder.

I also prefer the details in the second apartment over the first one. The lampshades beside the wooden structure are fantastic. The kitchen unit is great, with its hanging pans, side counter and the 45-degree angled sink with window. 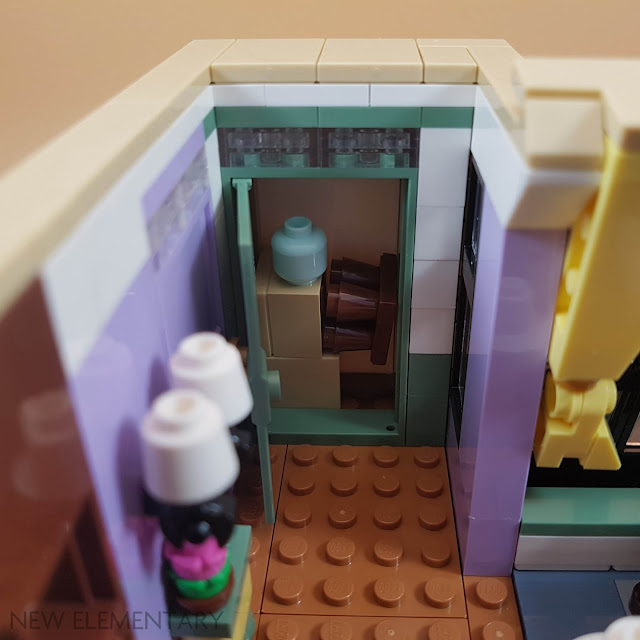 I particularly struggled filling the box room as indicated by the instructions as the boxes fell out of the door before I could close it, so I had to flip the whole apartment sideways. I would have preferred it if the boxes were attached to the walls at the time you build them. Adding them after the apartment is done can be difficult if you have stubby fingers.

Although the second apartment was way more diverse and features many more little details, I miss one detail. While we have the Chick and the Duck of Chandler and Joey, as well as the smelly cat on the balcony that interrupts Ross and Rachel’s first kiss, I really miss Marcel - Ross’ little monkey!

One last remark about the apartments as a complete set-up. You can connect the single apartments with the hallway. A modified plate is used here to create an offset tile that slips into a slot in the hallway. Problem is, there is no fixed connection to stability to it. I would have preferred a solution using a simple plate that attaches to the hallway.

10292 Friends Apartments gives you a nice stage-style model with lots of different furniture and details, and allusions to the series. It’s a perfect, though expensive, addition to the Central Perk set. Even if the apartments are the more recognizable and common locations of the series, I liked the Central Perk set more. It had more variety in its angles and shapes, details and interesting techniques – all on a footprint a third to half the size of the apartments.

I don’t consider myself a fan of the series, although I watched the entire show some years ago and had a lot of fun remembering certain episodes and moments as I built the set. While I already talked about the instructions above, I particularly also want to highlight that throughout the whole manual there are many little “info-boxes” referring to the various iconic moments of the sitcom and their realisation in the set. This was extremely helpful in triggering flashbacks to those moments and also increased the fun of the building process of an otherwise not overwhelmingly exciting set, even though it is pleasing for the eye.

As a standalone, it is in my perspective a bit weaker than Central Perk for the above-mentioned reasons. And while it offers a great palette of parts and colours, I would not recommend this set only for parting-out its pieces. Fans of the series will enjoy the set and for owners of the Central Perk it is a great addition to the collection which overall is a nice display piece. It is available from this coming Tuesday 1 June priced £134.99/ US$149.99/ AU$259.99. If you've enjoyed this review and intend to purchase, please consider using our affiliate links as New Elementary may get a commission: UK LEGO Shop | USA LEGO Shop | Australia LEGO Shop, for other countries 'Change Region'.

Some extra pictures that didn't make the review are available to our Medium Azure + Vibrant Coral supporters on Patreon!