Thomas Jenkins (@thomas_jenkins_bricks) examines LEGO® Marvel Super Heroes 76178 Daily Bugle across 2 articles; today analysing its parts and then the build in this separate article. Please consider using our affiliate links to purchase, New Elementary may get a commission: UK LEGO Shop | USA LEGO Shop | Australia LEGO Shop, for other countries 'Change Region'. Products in this article were provided by LEGO; the author's opinions are their own. 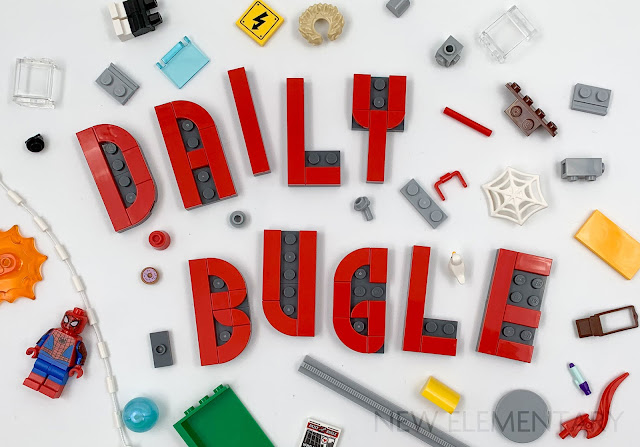 There are no new moulds in 76178 Daily Bugle, but we are treated to a large and varied selection of parts which include a handful of recolours and rare elements. We also receive significant quantities of some quite useful pieces. And of the 25 minifigures included in the set, 5 are brand new and exclusive.

For a set with such a great number of parts, there is a relatively small number of recoloured elements. 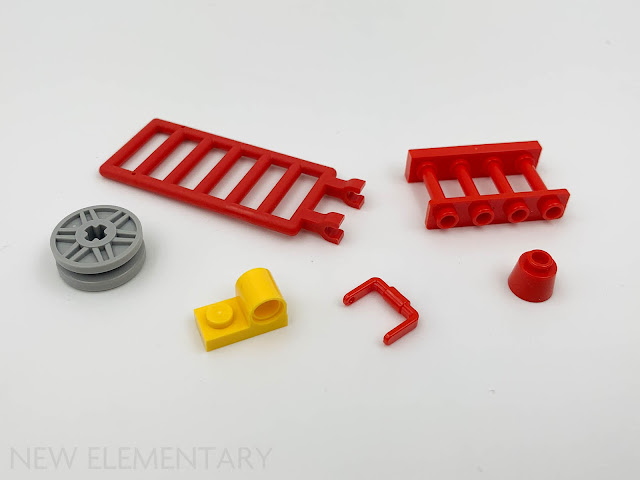 That’s not to say I’m disappointed. It’s great to see a classic piece like the ladder get a refresh with a new colour; great for making fences and guardrails. Paired with the fence, they really are excellent choices for the fire escape, and I imagine a number of town planners will incorporate this idea into their city MOCs. Personally, I can see myself using the bucket handle as a greeble piece but I wish we got a couple more (note that we do actually get an extra as a spare here, though).

Of these recolours, the wheel surprised me, it’s only been available in White up until now and has appeared in a whole bunch of sets. Grey seems like an obvious choice for such an element, and this kind of wheel comes useful in a number of situations to represent any mechanical cylindrical shape, like engines on a starfighter for example, so this is a welcome inclusion. 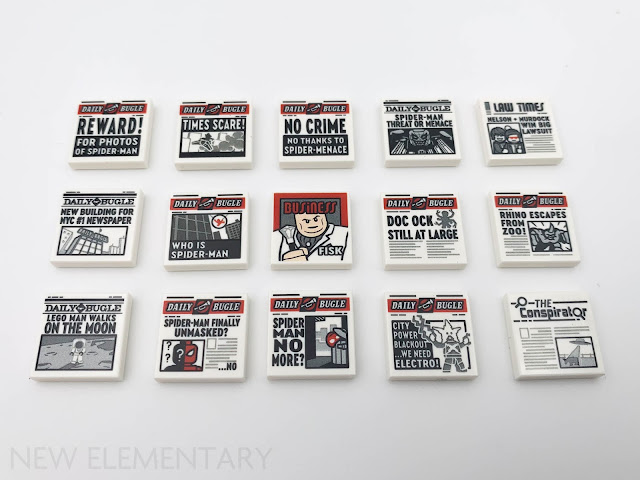 The Daily Bugle contains a delightful set of 18 printed tiles that are packaged together in a single bag and listed in the inventory as a single item, the element ID is 6360862. There are 15 unique prints but the set of tiles contains three extra ‘No Crime’ patterns. These are really fun elements and contain a number of Easter eggs featuring characters from the Spider-verse. The ‘Conspirator’ newspaper is a more generic print having been created by the LEGO designers rather than the Marvel writers.

There are plenty of rare parts contained in 76178 Daily Bugle. I spent a long time poring over the set inventory which spans the last five pages of the manual, and yet I continued to find rare and interesting pieces during the build. Yep, this set contains a lot of parts.

The following parts appear in one other set: 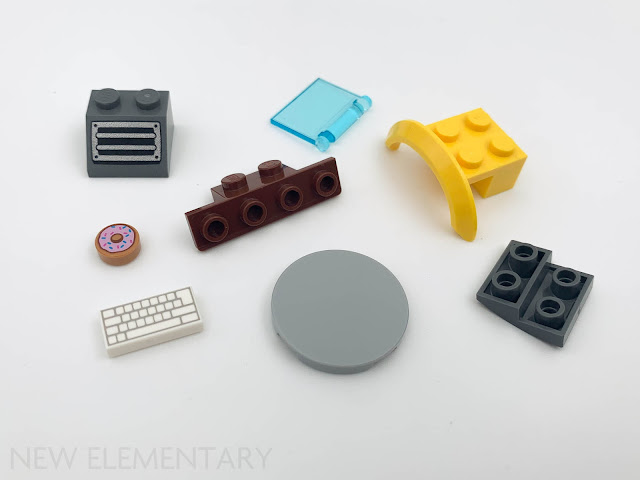 The following parts appear in two other sets: 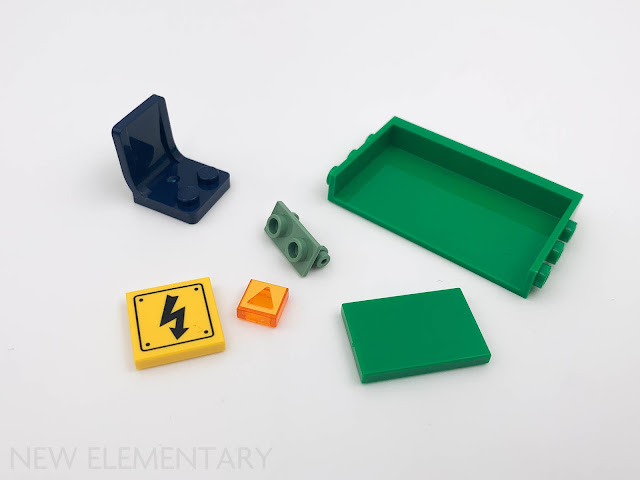 And the following parts appear in three other sets: 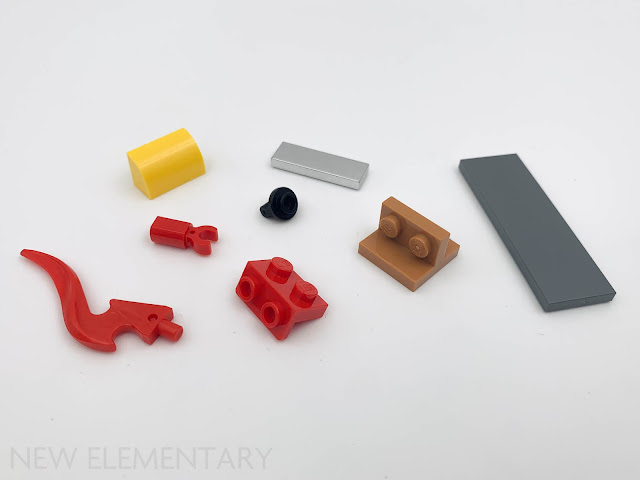 As this is such a large set, there are a number of elements  that appear in large quantities, many of which are extremely useful.

First up, a variety of grey SNOT bricks. I always find myself running out of these pieces so I’m grateful for this top-up. That is, if I can bring myself to part out this magnificent model. 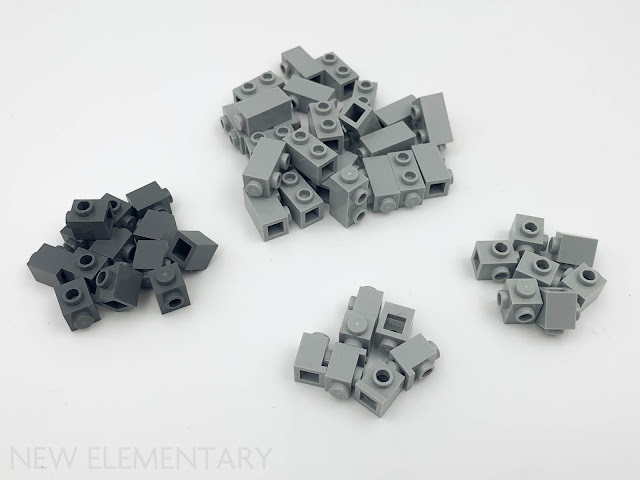 We also get a nice selection of useful parts for the budding architects out there. 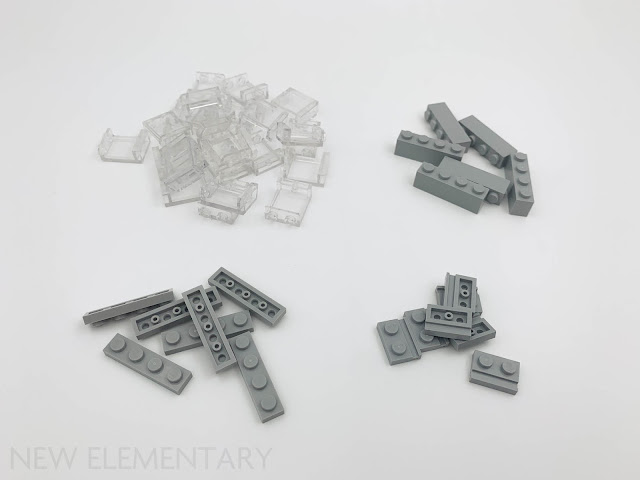 Next up is a decent portion of studless elements. 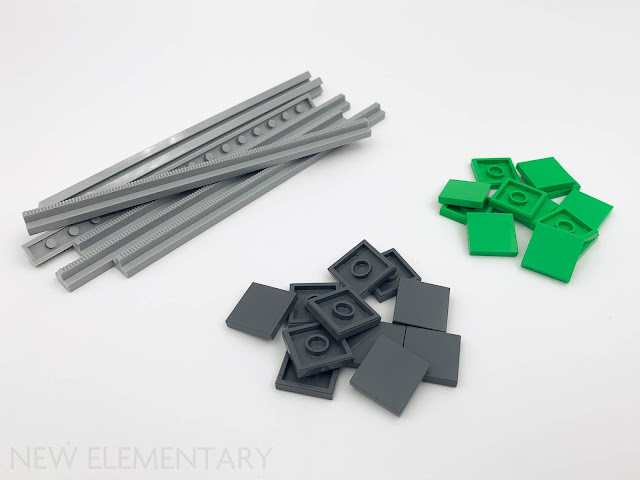 And finally, a generous helping of some really useful parts which I’ve categorised as 1x1 elements: 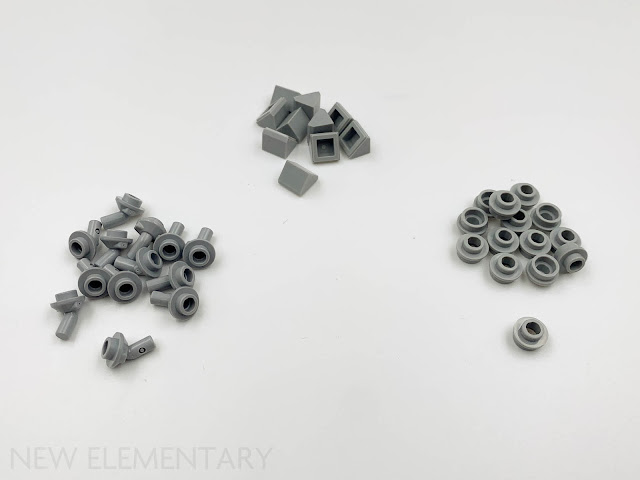 I’m delighted we get so many of these elements. I’ve found the former especially useful for rcreating 45-degree angles in the internal structures of my builds, but the Light Bluish Grey colourway that has appeared only a little earlier this year has been a great part for greebling. I was so impressed with the way this part was used in the set; I have to show it off now: 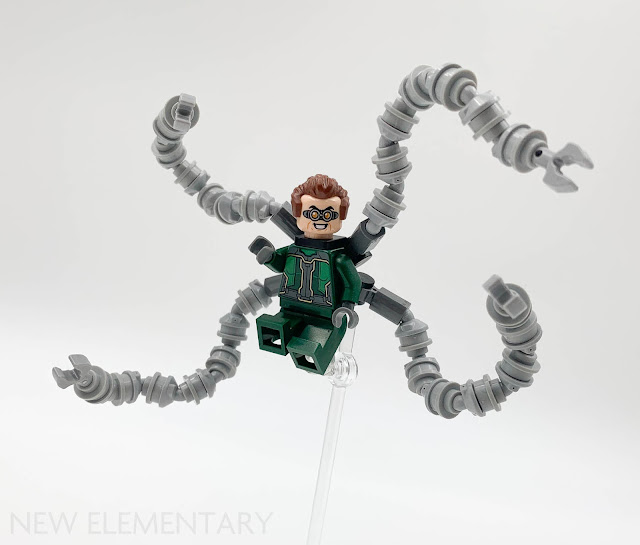 We’ll have a look at the building techniques in 76178 Daily Bugle in a later article, so consider this a preview. This is such a great technique for Doctor Octopus’ prehensile mechanical arms, I’m sure it’ll work its way into the MOC building community; perhaps not just for robot arms but maybe also to represent some pipework or hose-like greebling in a sci-fi or space build.

We’ll also have a look at the rest of the minifigures a little later, but this iteration of Doc Ock may be one of my favourites among the 25 minifigures that appear in here. His mechanical arms may take a little time to position just right but they do look superb.

There are two sticker sheets included in the set: one large opaque sheet and one smaller transparent sheet. 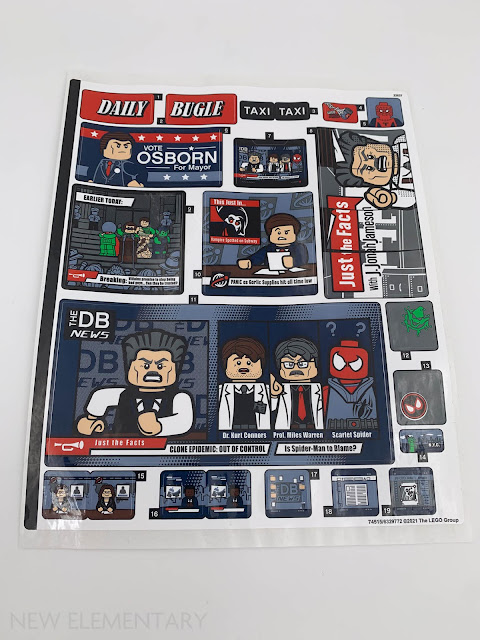 Usually I’d recoil at such a large number of stickers in a set, and such big ones too, but the graphic design team did a fantastic job with these and since they are so big, the model would suffer without them, leaving big empty black spaces in the build. Many are Spider-man-specific in their design so once applied those elements will have their usability decreased significantly, becoming pretty much exclusively Spider-man parts, but most aren’t applied on particularly rare pieces, save the manhole cover which is used on the Light Bluish Grey 3x3 round tile. 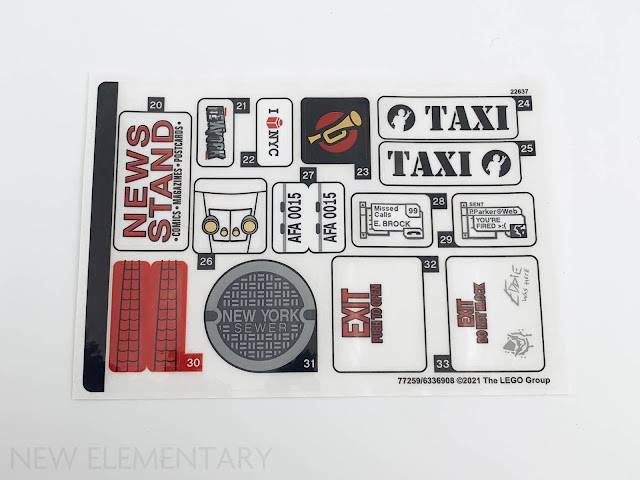 I’m a fan of the New York City-centric graphics too. They might work well as bumper stickers on a car or truck.I’m sure some of the other designs such as the ‘TAXI’ print will have some appeal for MOC purposes too.

I know, I know, you must be yelling ‘Get me pictures of Spider-man!’.

There’s a whopping 25 minifigures that appear in the Daily Bugle. That’s a whole series of Collectible Minifigures, and then some! The set boasts five exclusive figures and they are: 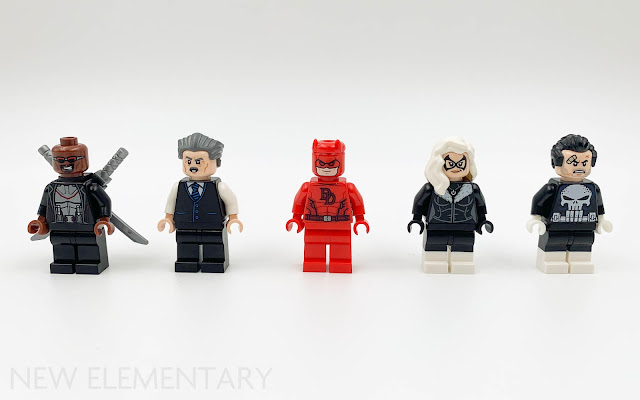 As you’d expect, the new figures are adorned with some nice new prints. I particularly like J. Jonah Jameson’s alternate head print. 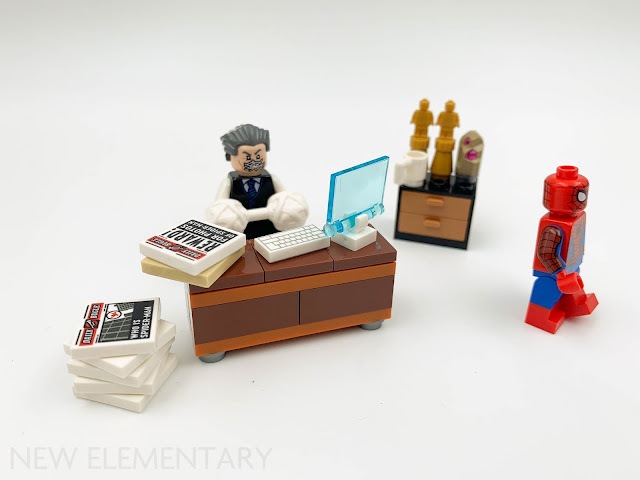 There are a few notable elements that make up the minifigs, for both the new faces and returning characters: 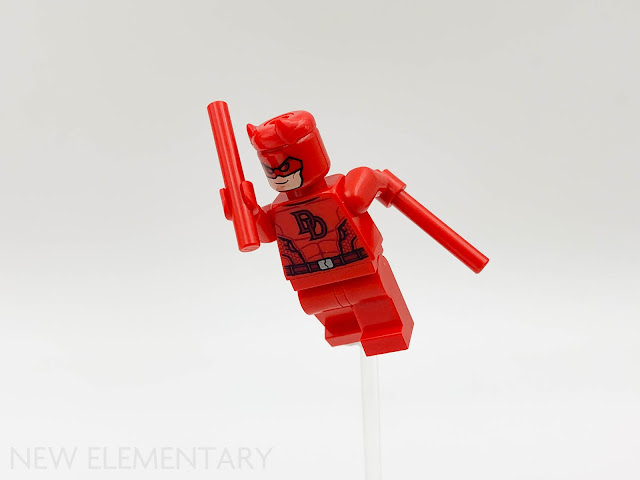 Daredevil has a 1x Minifig Head Top with Panther Ears [Plain] in Red (6344698|25264) to represent the devil horns of his costume. I think these would work well paired with other Red minifig heads to create a demon or devil. This is a new colour for the part and we get a spare in the set. More useful to builders will be his signature batons, they are 2 x: Bar 3L in Red (6275080|87994). It’s an uncommon piece having only appeared in four other sets. 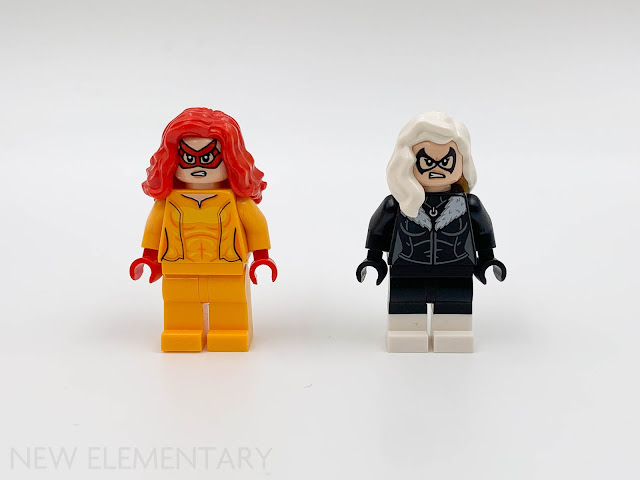 Firestar has a recoloured wig in Minifig Hair Long Wavy with Centre Part in Red (6343473|95225). She’s a new figure, but not listed as ‘exclusive’ in the press release. Perhaps we’ll see her reappear soon in an upcoming Marvel set? 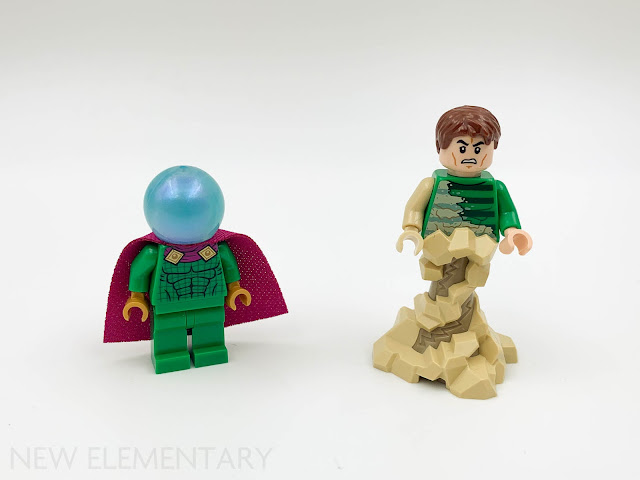 Mysterio is back sporting 1x Minifig Helmet Round Sphere with Small Hole in Trans Blue Opal (6324167 |51283). This is the second appearance of this part as we also saw Mysterio in this costume in 76174 Spider-Man's Monster Truck vs. Mysterio.

Sandman has a Lower Body, Swirling Rocks over Dark Tan Cone Pattern (6249263|28376c02). It’s only been in two other sets thus far. It’s an interesting element and despite its origins as a minifigure part, I think it could be useful elsewhere. 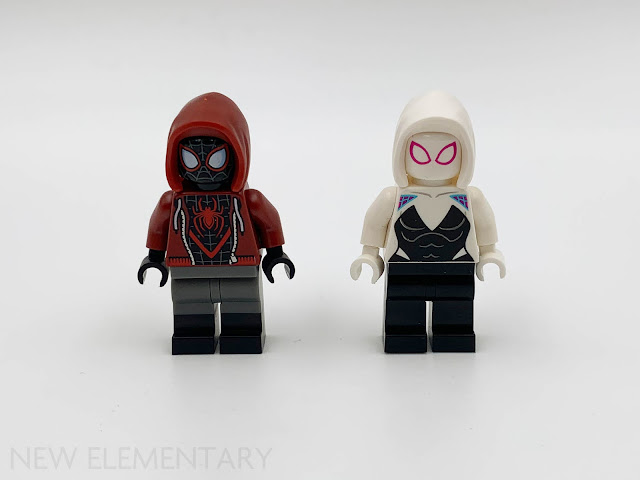 There appear to be a few new torso prints for the civilian figures too. They are some useful prints that are generic enough to be used in a variety of settings: 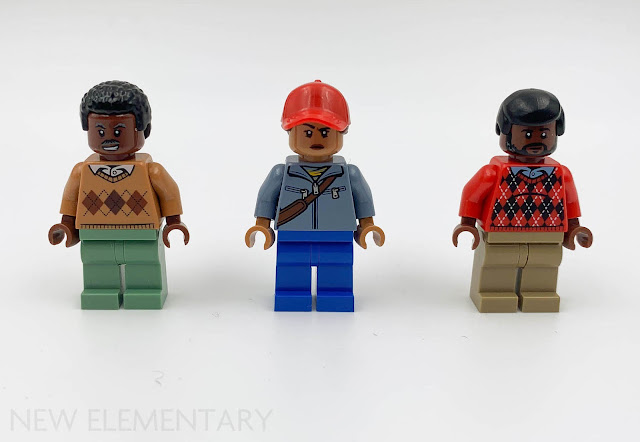 Left to right these figures are:

I don’t think I have to re-iterate just how massive a set 76178 Daily Bugle is. A great deal of useful parts appear in large quantities, such as the windows (which account for almost 10% of the total pieces) and the selection of different SNOT bricks, which might be enticing for builders from a number of different genres. Despite the sheer number of these pieces, there is still plenty of room for a surprisingly diverse selection of parts, and hopefully the rare parts pictured above will give some idea of the wide range of colours that are included too (a bit surprising for a set that appears mostly grey from the outside). Check out my build review to see how colourful the Daily Bugle interior really is.

If I can bring myself to part out this set (the number of pieces make this a daunting task, and it’ll be hard to dismantle such a beautiful model), the newly recoloured red ladders will be interesting to play around with... and I won’t be running out of SNOT bricks any time soon.

But as is the trend with a number of licensed sets these days (especially larger ones like this) the exclusive minifigures, a few of which have been long-awaited, will be the biggest draw for fans of LEGO and Marvel comics alike. It will be available from tomorrow, 26 May 2021 for LEGO VIP members and will be available to all from 1 June priced at €299.99/ £274,99/ $299,99/ 499.99 AUD/ 399.99 CAD. If you enjoyed our coverage, please consider using our affiliate links to purchase it, as New Elementary may get a commission: UK LEGO Shop | USA LEGO Shop | Australia LEGO Shop, for other countries 'Change Region'.

READ MORE: Continue to part 2 of this review; the build

Posted by: Admin Posted on 5/25/2021 09:52:00 am
Email ThisBlogThis!Share to TwitterShare to FacebookShare to Pinterest
Labels: Super Heroes