Jonas Kramm (@jonaskramm) is joined by Stefan (@robo.block) today to create alternate models from 4 LEGO® Harry Potter sets coming in June 2021! Editorial note: Although views expressed by Harry Potter's creator do not align with that of New Elementary, we continue to cover some sets for their parts. Read about our stance here. Products in this article were provided by LEGO; the author's opinions are their own.

In the first part of the review we took a detailed look at the new moulds, and recolours of existing pieces. Today we take it a step further to see what else we can build with the pieces from upcoming LEGO® Harry Potter sets. To make this alt-build task a bit of a festival, I got help from Stefan who dropped by to contribute his own creative juices. 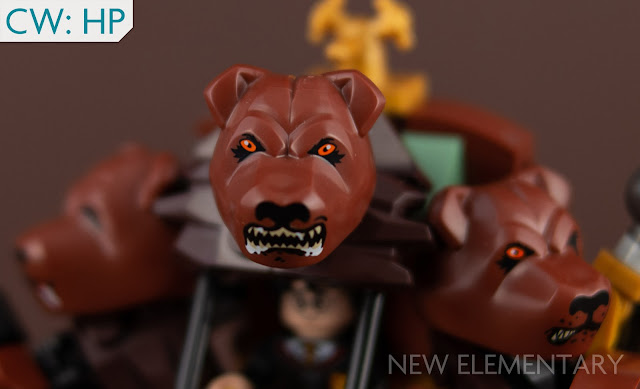 For the first build we jammed together 76386 Polyjuice Potion Mistake and 76387 Hogwarts: Fluffy Encounter. Neither one looked to have a lot of potential on their own, so we extended the possibilities by combining them.

Ever wondered what would have happened if Harry Potter got into LEGO Rock Raiders? 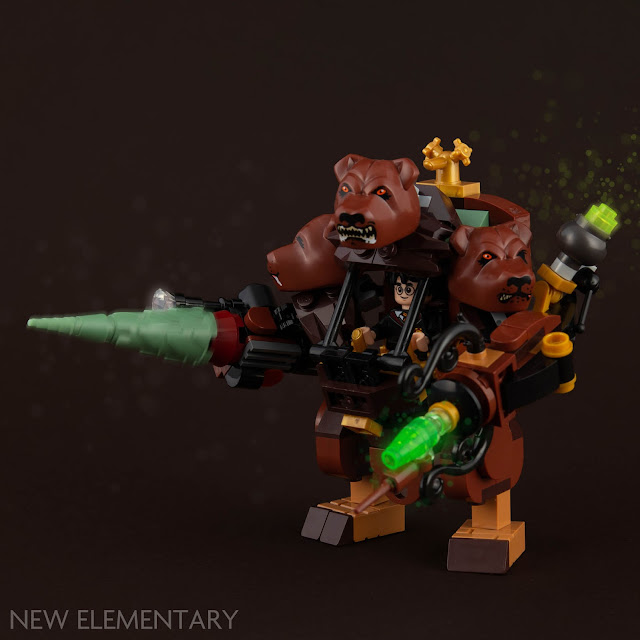 Maybe he would have used his magic skills to build a Mech to defeat Lord Voldemort with a Hogwarts drill or the Polyjuice canon. 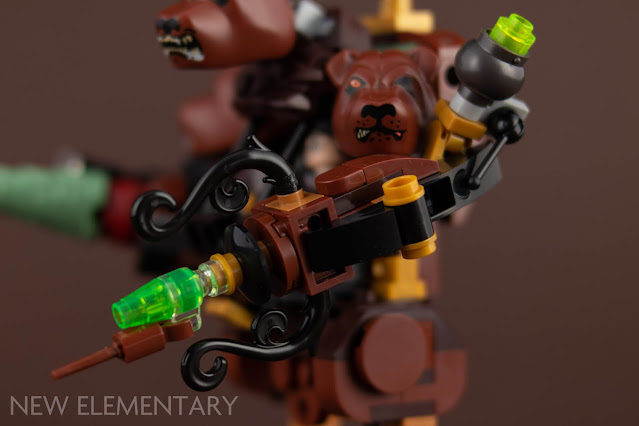 With all the Warm Gold/ Pearl Gold elements used, it also has a Steampunk aesthetic. 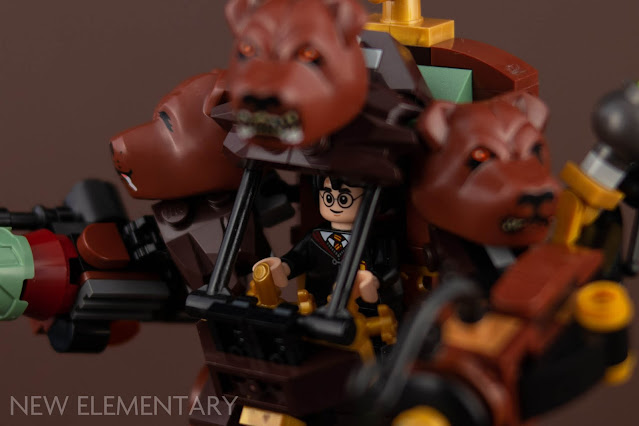 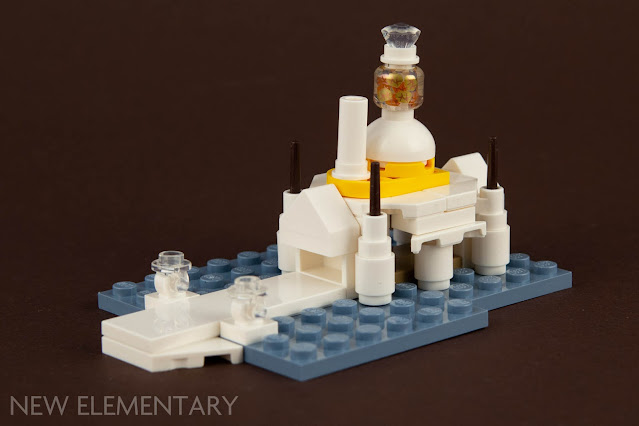 And from the leftover pieces of 76386 and 76387 this little tablescrap of a temple came to life using the white slopes.

For set 76388 Hogsmeade Village Visit we split up the set into its two buildings. 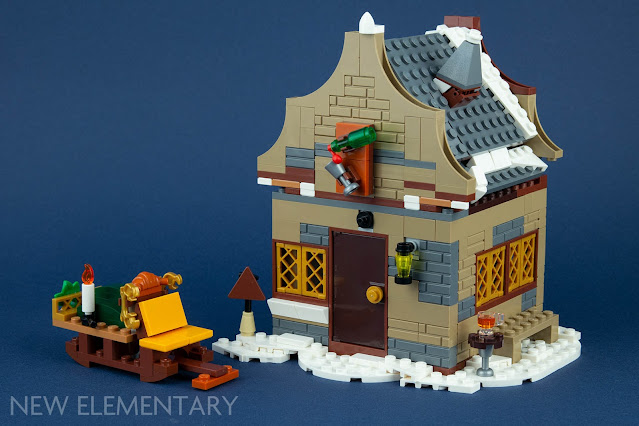 Stefan got the bags from Three Broomsticks and built a tavern in a winter scene. His inspiration was using the inverted arches, which come in Sand Yellow/ Dark Tan for the first time. 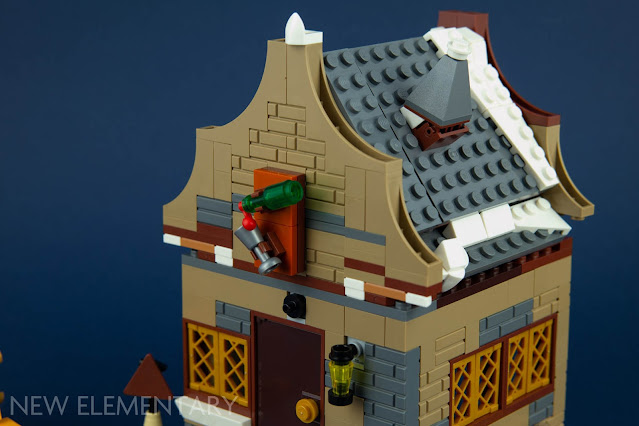 The inn’s sign is made by combining a bottle, a goblet and cherries as red wine. 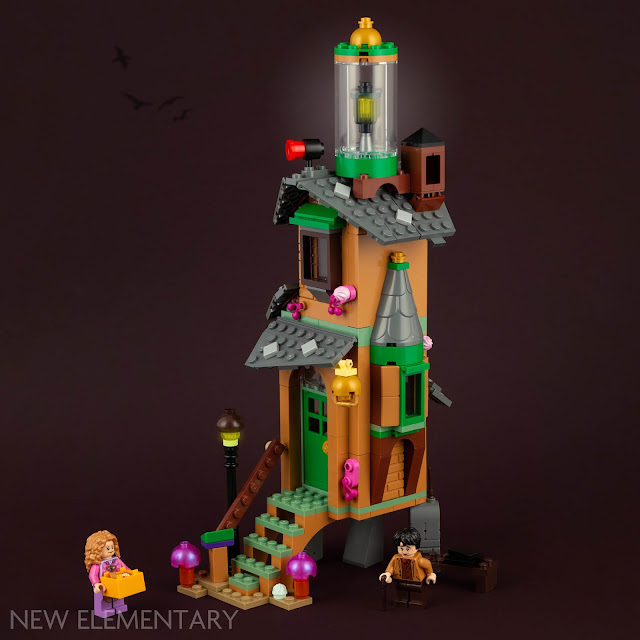 I got the bricks from the Honeydukes and wanted to go for a tall and narrow building with fragile architecture inspired by The Burrow. 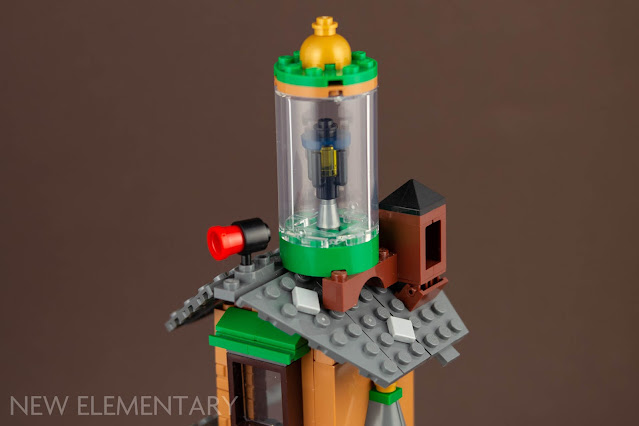 The Transparent/ Trans-Clear bay windows became the lighthouse light and pushing a Minifigure bucket into a saucepan makes a fun siren. 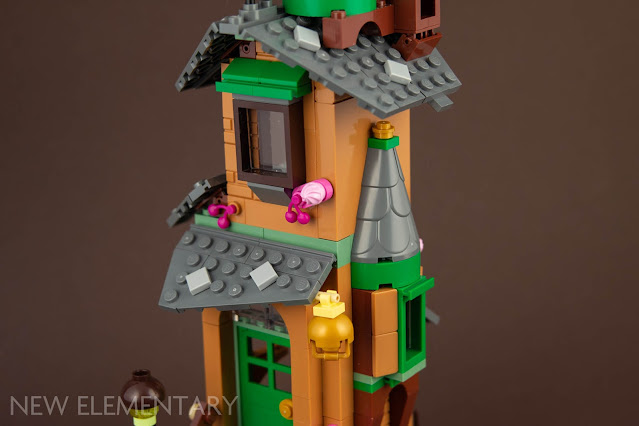 While building I became fond of the colour combination of these parts. Medium Nougat walls, Dark Green/ Green windows and a Dark Stone Grey / Dark Bluish Gray roof look good together. The random supply of different window sizes worked to underline the crooked look of the building. 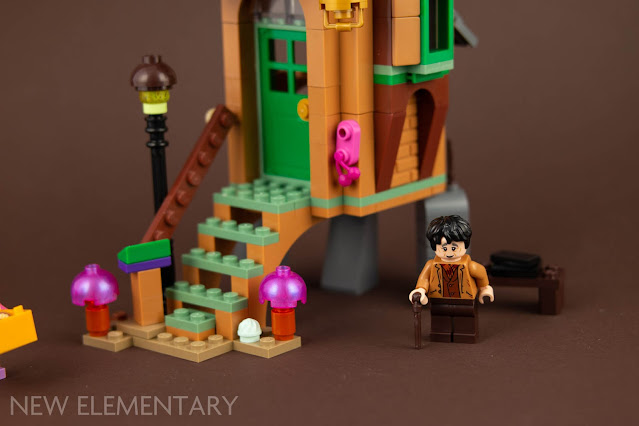 For our last build we used the more-than-1000 bricks of 76389 Hogwarts Chamber of Secrets to see what we could do with them. 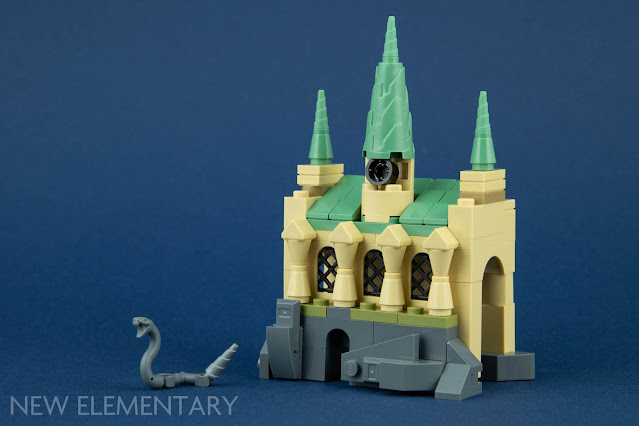 Stefan had the idea to build a micro version of Hogwarts and therefore used all the tiny pieces that come with the set. To make the best of the scale he clamped in a Black Fez to make the window of the tower, and also built the Basilisk with the available elements. 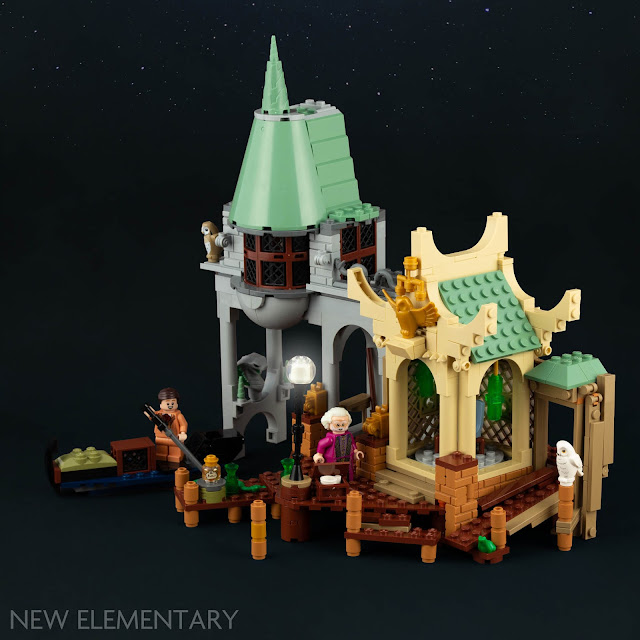 For my final model I went big and created a scene which was influenced by the canals in Venice, but also features architecture that looks rather Asian. I didn’t think too much about it though, and just enjoyed mixing the styles a bit. 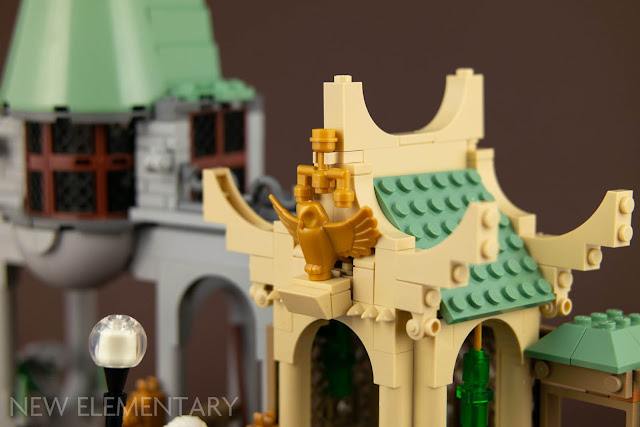 On the right side is a small Asian temple that uses the new golden candlestick and owl as decoration.

The round arches have small holes, which fit wands. This is very useful as it allows the connection of the lamps in the temple and holds the snakehead in place. 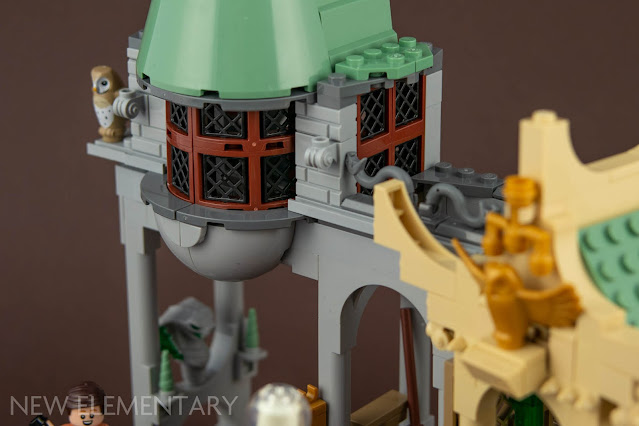 For the building on the left I used the new round windows in Reddish Brown. They are 3 x 3 and fit perfectly inside the 4 x 4 Macaroni Tile. 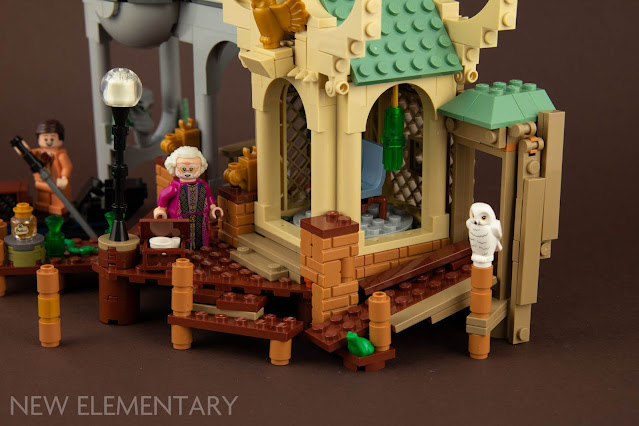 I would have loved to include a tree or other plants in the scene, but unfortunately the set doesn’t include any. We also had the experience that all Brick 1 x 1 in Brick Yellow/ Tan and Medium Stone Grey/ Light Bluish Gray in this set are Technic Bricks with a hole, which can be quite annoying when you want to build a wall. 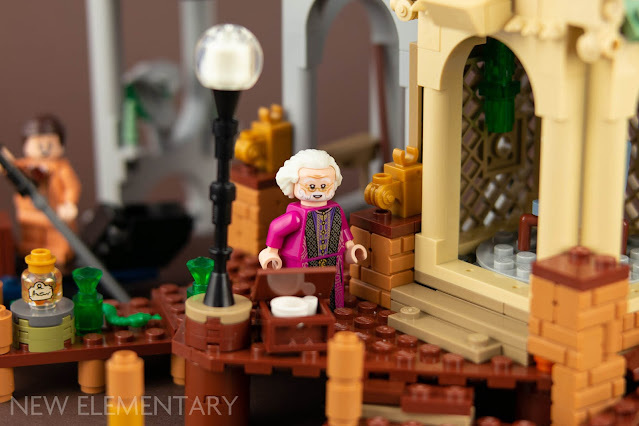 Making alt-builds from these four Harry Potter sets was a lot of fun. I think especially the Mech shows how you can make something completely different, if you want. 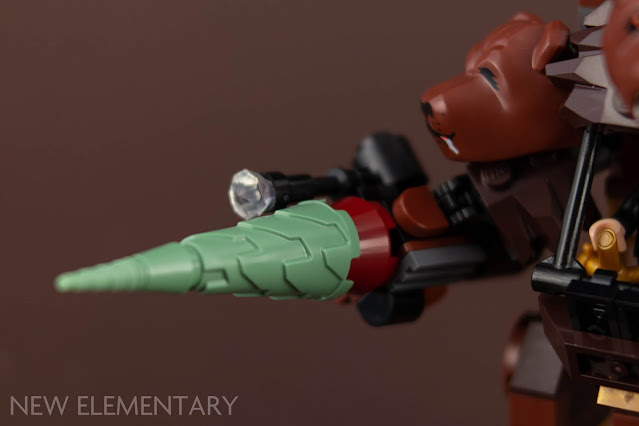 Usually I start with the idea of what I want to build and then collect the required bricks from my collection. Being limited to what’s on the table helped me sketch out some fun ideas faster and be more open where the available bricks would guide me. 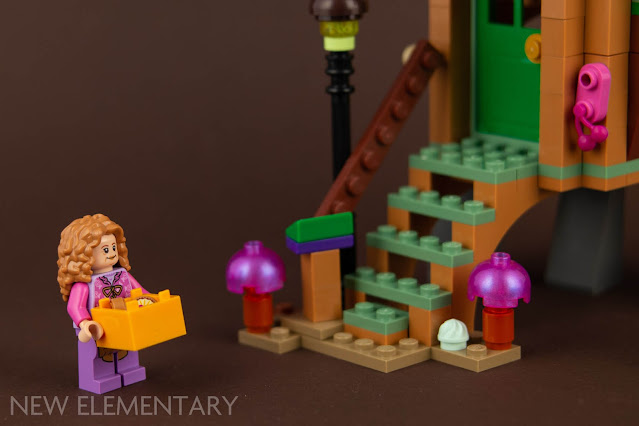