TobyMac (@efraimaspie) examines another of the upcoming 2021 LEGO® Creator 3-in-1 sets: 31122 Fish Tank. Released 1 June 2021 priced £24.99/ €29.99/ AU$44.99 (except North America; 1 August US$29.99). Buying this set? Consider using our affiliate links, New Elementary may get a commission: UK LEGO Shop | USA LEGO Shop | Australia LEGO Shop, for other countries 'Change Region'. Products in this article were provided by LEGO; the author's opinions are their own. 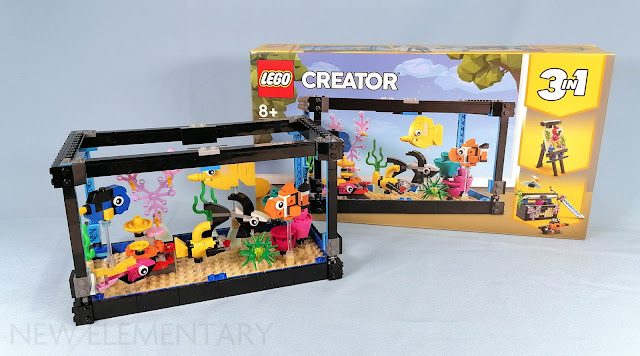 The second LEGO® Creator 3-in-1 set I’m reviewing is a lot smaller than 31120 Medieval Castle. But size doesn’t matter, as long as it brings us some new elements. Let's take a dive into the Fish Tank.

The set contains 118 different elements, with 352 parts in total quantity. The tank itself uses a lot of black elements, but the fish in the tank bring a colourful palette for you to enjoy. There are no new moulds, prints or a sticker sheet. 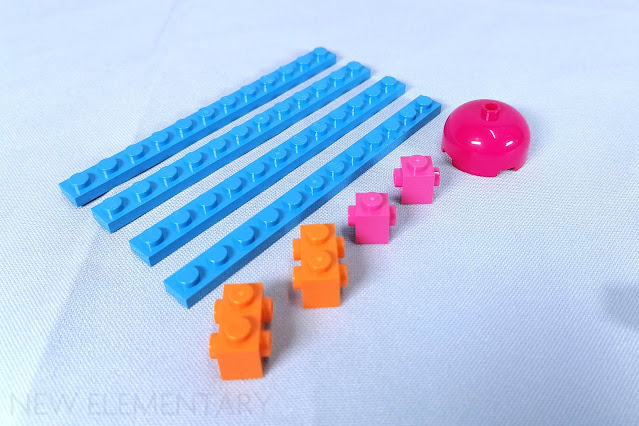 We welcome 4 new recolours. I’m most excited about the 2 SNOT bricks, expanding the possibilities of colourful MOCs. 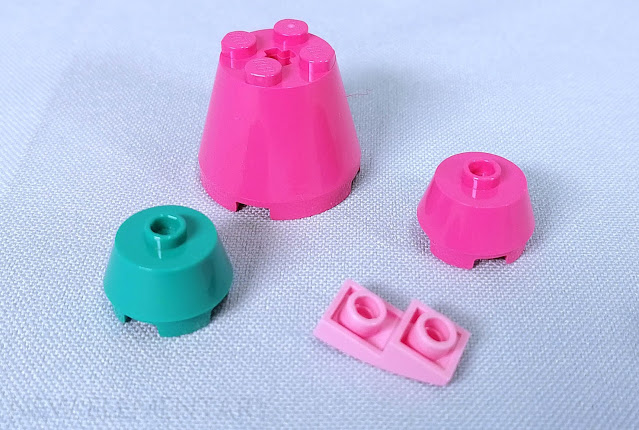 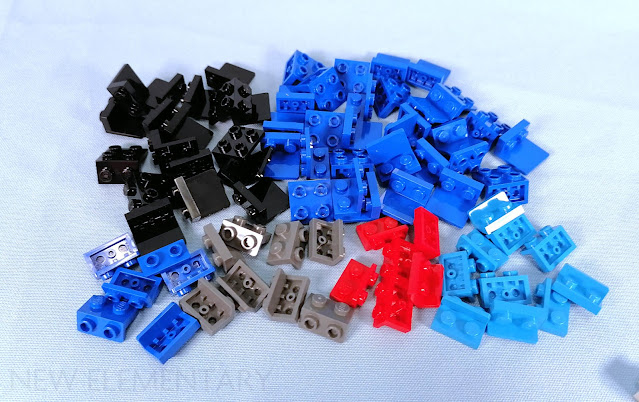 Also worth mentioning is the quantity of brackets in this set. You get 78 pieces of various 2-wide brackets, along with some extra 1-stud wide and 4-stud wide brackets.

As usual, there are 3 models in this set. I must say, only the Fish Tank seems really interesting to me, but I’m ready to be surprised. 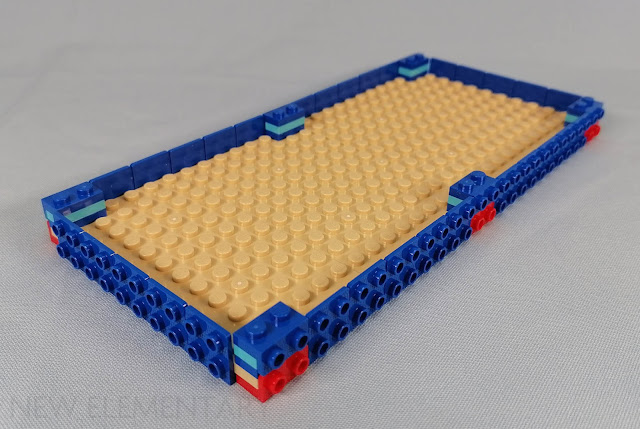 Model A is the Fish Tank. The base is made out of Brick Yellow/ Tan plates, surrounded by brackets. So far, so good. 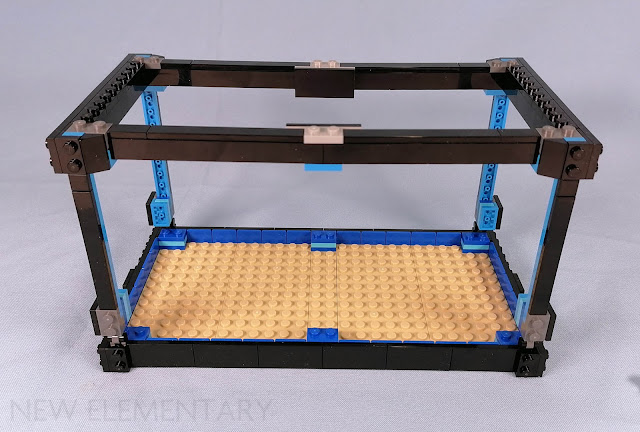 The tank is done pretty fast. I do have a hard time liking it. There is grey and blue sticking out and the sides have a thick part near the bottom, with a very slim clip connection underneath it. It just looks messy. 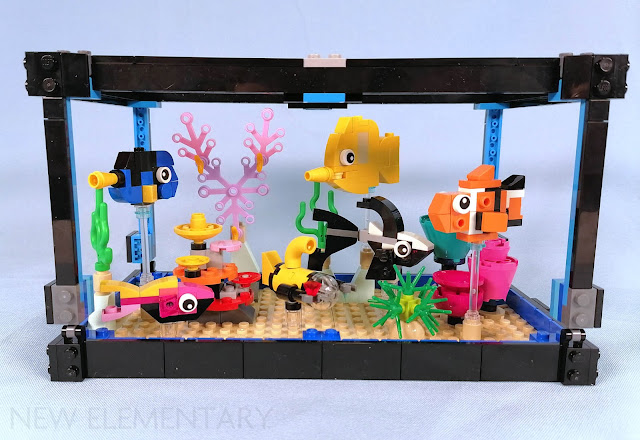 The saving grace of the model are the inhabitants of the tank. There are 5 cute fishes, a submarine and coral decorations.

Model B is a treasure chest, along with some mini-builds. The model uses 224 parts, of which a lot are brackets. 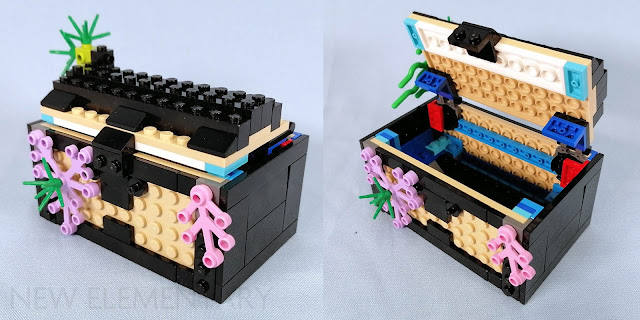 What can I say? The multitude of colours in the brackets disrupt the looks of the chest. It feels like a prototype model where the designer used whatever colour of part was within reach, and then forgot to update the colours for the final model. 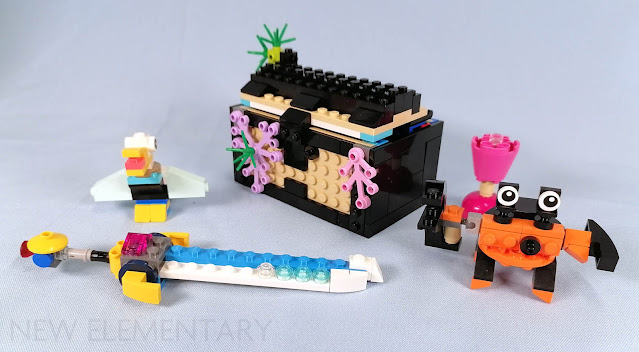 Again, the mini-builds save the model a bit, but this is really not doing it for me. 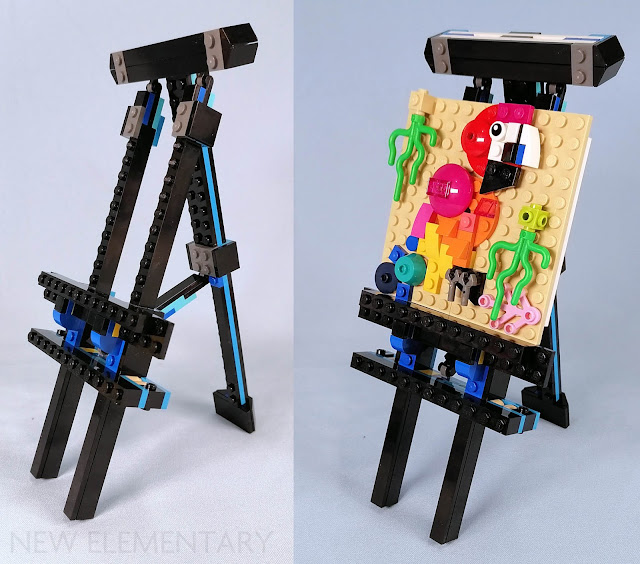 The third model is an easel with a canvas, using only 160 parts. Again, I’m not a fan of the distracting colours in the easel, but as a build, it works very well. It could work as a small display piece. I like the idea of adding a canvas. Most readers of New Elementary will of course immediately design their own paintings.

As you might have noted, I’m not liking the models in this set. The Fish Tank has a great interior, but the tank itself needs some colour swabs for me to work. The treasure chest, well, it’s a direct skip. Weirdly enough, I like the smallest model, the easel, the best. With ‘the best’ being relative to the other models.

You do get some nice recolours with this set. And besides a load of brackets, there are also some black tiles to be found but they can also be found on Bricks & Pieces, so I’m not sure if the set is worth it.

Posted by: Admin Posted on 5/23/2021 11:20:00 am
Email ThisBlogThis!Share to TwitterShare to FacebookShare to Pinterest
Labels: creator, Set review