Eero Okkonen examines the parts in LEGO® BrickHeadz sets 40495 & 40496, both released on 1 June 2021, before using some of them in his own creations. Note, this article does not cover the actual build of the models – please visit other fan sites for that, such as The Rambling Brick. The products in this article were provided for free by LEGO; the author's opinions are not biased by this.

The target audience for LEGO® BrickHeadz sets 40495 and 40496 are people who want to have simple, rectangular models of Harry Potter franchise characters on display. These two Brickheadz sets, each containing multiple characters, are not what I would call “essential New Elementary content”; they’re fairly basic models with only a few unique printed parts. Also their theme licence has its problems: New Elementary has a stance on Harry Potter sets following JK Rowling’s shocking and hurtful views on transgender people, which you can read here. I am aware that reviewing this merchandise might work as an advertisement, and JK Rowling might even profit from it. I don’t like it. 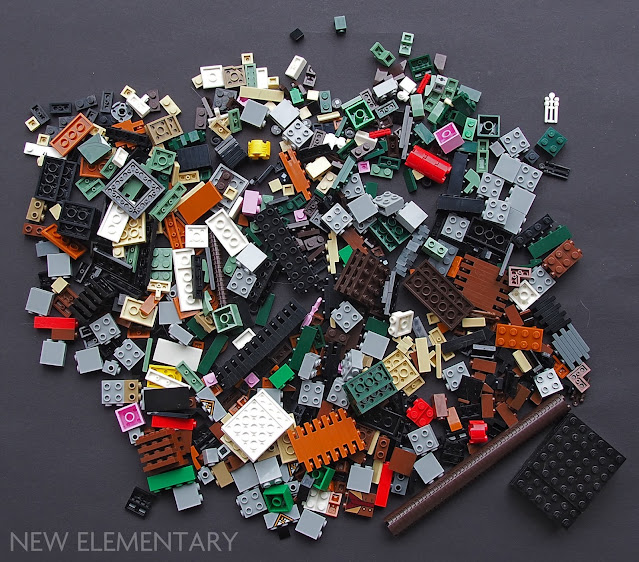 So, why do we review such sets? Firstly, we do not always know what pre-release sets we’re getting from TLG, and secondly, it’s worth knowing that all sets are not new mold powerhouses; and such sets may have other qualities. Due to this issue, I have deliberately faded out the Potter aspect of this article, rather focusing on the parts and creating my own models. I will also return to this issue later on. 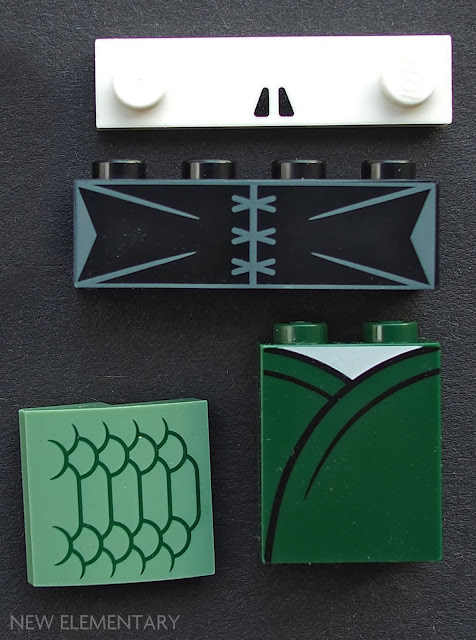 They are not super exciting; The bodice is geometrical enough for some surprising uses in MOCs. 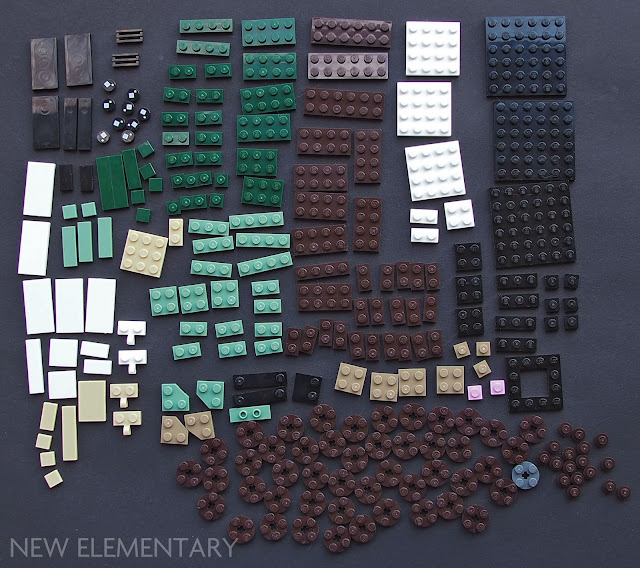 Looking at the useful parts like plates, tiles and suchlike; the most notable are 16 1x1 round plates in Dark Brown, which have previously only appeared in LEGO Art sets although right now, the gift-with-purchase at LEGO.com is 40451 Tatooine Homestead which contains one. (As always, please consider following our affiliate links to LEGO.com, New Elementary may earn a commission). The 1x3 “Double Jumper” has only appeared in Sand Green before in 75318 The Child. There are also 47 Dark Brown 2x2 round plates; they’re very common pieces, though. 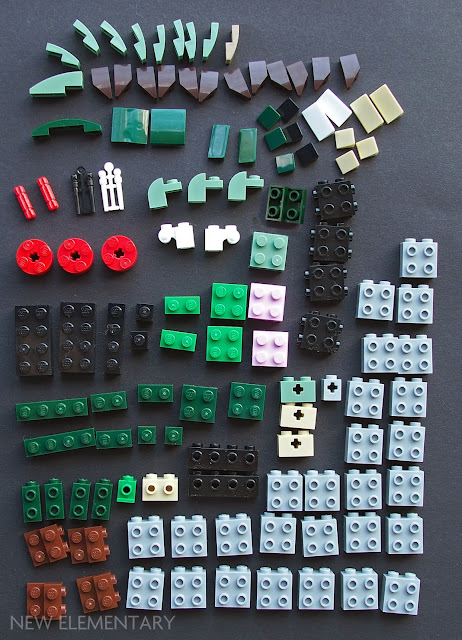 As for the rest; 1x1 Technic Brick with Axle Hole (6336539|73230) makes a pleasing appearance, having been in just six 2021 sets before. Otherwise, it’s nothing special but definitely an useful array of parts.

There are seven elements sporting four unique prints in 40495. 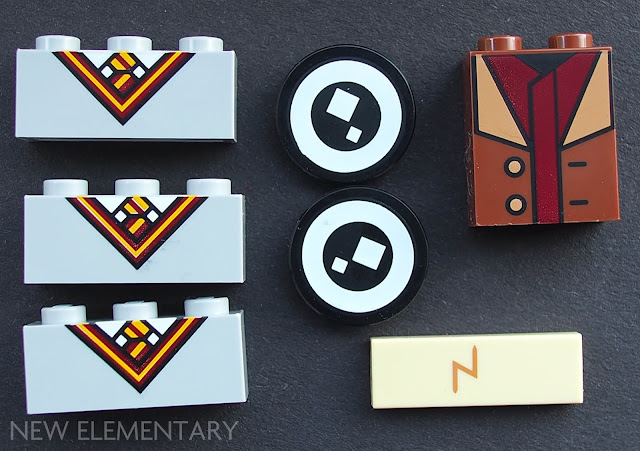 The tie print on Brick 1 x 3 in Medium Stone Grey/ Light Bluish Gray (6345694) appears to be very similar to the previous school uniform printed 1x2 brick in Brickheadz 41616, only now it’s printed on a wider brick.

The enlarged “goggle” eyes on Tile Round 2 x 2 in Black (6345693) look humorous, and might have a bright future in cartoony MOCs. 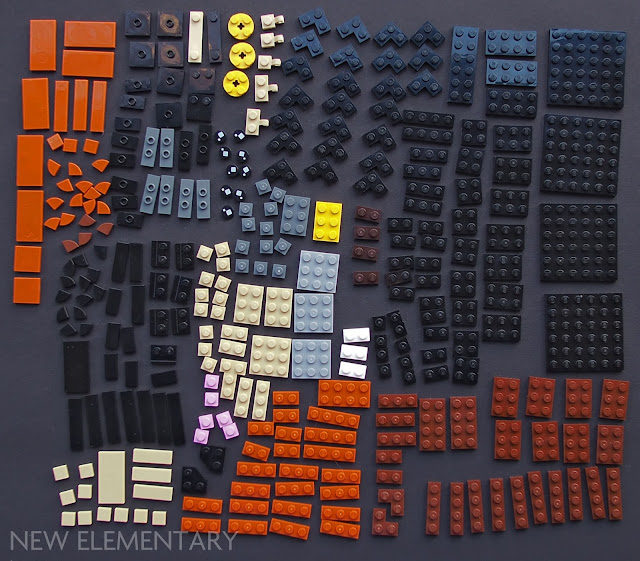 Plates, tiles and such; there is a very welcome recolour of the 1x3 “Double Jumper” in Dark Stone Grey/ Dark Bluish Gray (6343852) at last, and overall these are very useful parts. I’m happy to see 24 2x2 corner plates in Black. They’re friendly pieces! 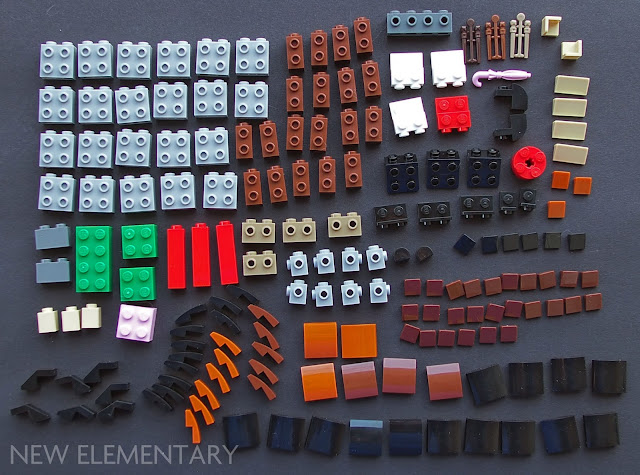 The rest; again, overall useful parts, but nothing really exciting.

The Appetizer: A Bunch of Bags

I do not know why 1x4 brick printed with a bodice made me think of a handbag. Maybe it’s the triangular shadows on the sides, depicting curves of a human body (as absurd as that is in a deliberately rectangular figure). They look a bit like a bulging bag, right? Right? At least this 3:10 bodice is too short and wide for any realistic character.

The other bags were made to accompany the black one; The tie print bag is maybe a tad far-fetched but I quite like the snakeskin one.

My original MOC idea for Brickheadz - before seeing these sets themselves - was to use their printed parts on an entirely different type of character. The bodice print turned out to be too wide, the school uniform ties and the dark green robe were a bit bland. Fortunately the Reddish Brown 1x2x2 brick had a pleasant open jacket print with dark nougat and dark red print. 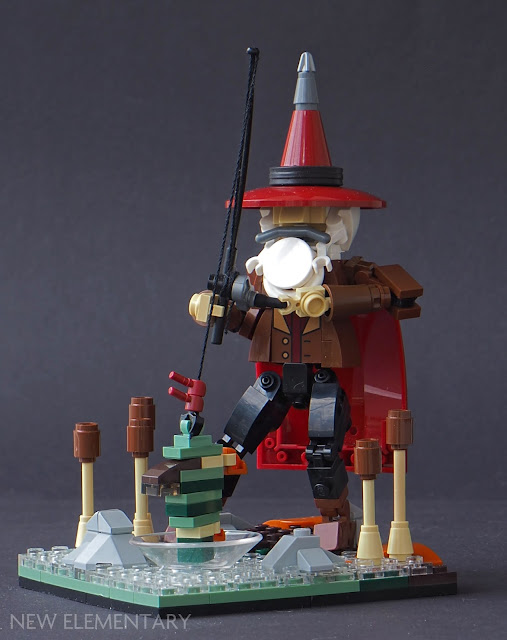 That was perfect for Mustrum Ridcully, the archchancellor of Unseen University on Sir Terry Pratchett’s Discworld books. (There have been a couple of 10,000-vote LEGO Ideas projects depicting Discworld, but no sets so far). On magic-using characters working on institutes of learning, I prefer Ridcully. He’s an avid fly fisher, thus resembling my father. So I wanted to capture him in his leisure, and a fishing scene required dynamic posing - something entirely different from the blocky, static nature of Brickheadz! 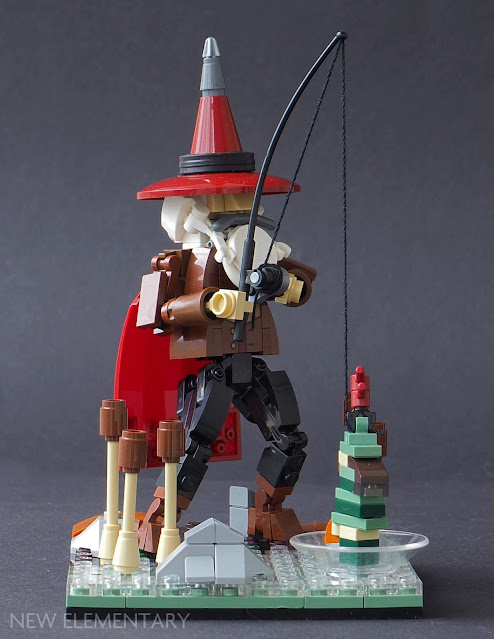 The figure is roughly Miniland-scale. Miniland figures are usually statue-like, but their construction allows different body types, poses and stances, thereby giving them loads of character - something unattainable on minifgures or Brickheadz! My small Medium Ridcully (I’ve also built a minifig version, 1:2 bust and several large figures of him) takes this a bit further, as he’s a poseable figure with 19 points of articulation. Though to be honest, the arms could be better in terms of both joints and proportions, but the Reddish Brown palette of “small fiddly pieces” was limited. 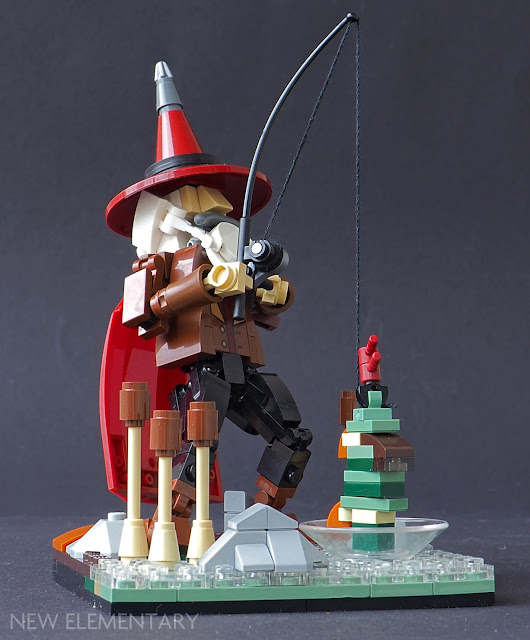 These MOCs are not alternative models - you can’t build your own Ridcully with 40495 and 40496, unfortunately - but the sets also helped with the landscaping of the scene, as they have plenty of earthly colours.

Also, to all anglers writing your sharp feedback, I know that perch isn’t the typical fly fishing fish, but this is a Discworld vignette, so probably it’s a Lancrean Rapid Perch; very keen on nymphs.

The models look like they do on the box (for reviews of these sets visit our friend The Rambling Brick); there are no adjustable landing gear, opening drawbridges nor arm-swinging functions upon cranking a gear on their backs. They’re collector’s items. It’s hard to find much “universal value” on these models. They’re decent models of rectangular Harry Potter figures, but if you are not into rectangular Harry Potter figures - no matter if they are LEGO or not - you likely won’t like them. I don’t, but I believe collectors will buy these sets no matter what my opinion on them is.

Part-wise these sets are packed with humble, usual and useful pieces constantly needed by MOCers. They’re useful for architecture, castle dioramas, character builds, anything. There’s no new weird parts with excitement value, but hey, I’ve seen countless amazing MOCs without them. And even when building MOCs based on some weird seed parts, the vast majority of parts used tends to be something akin to what’s available in these Brickheadz.

Nevertheless, I don’t recommend these sets. The parts, despite being universally useful, are very common. It’s easy to buy them from BrickLink or Pick-A-Brick, without paying higher pricing of a licenced set and indirectly steering a cut of profits to the author with discriminating and inhumane views. Every consumer has a power.