TobyMac (@efraimaspie) reviews a much-anticipated upcoming set today: LEGO® Creator 3-in-1 31120 Medieval Castle. Buying this set when it is released on 1 June 2021? Consider using our affiliate links, New Elementary may get a commission: UK LEGO Shop | USA LEGO Shop | Australia LEGO Shop, for other countries 'Change Region'. Products in this article were provided by LEGO; the author's opinions are their own.

Name a theme that LEGO should revive, and the most-heard answers will be Space, Castle and Pirates (and, surprisingly for me as this theme was launched during my dark ages: Bionicle). TLG has said those three ‘Classic’ themes will not return as stand-alone themes, but will instead be featured in the Creator 3-in-1 line. We’ve already seen 31109 Pirate Ship, 31107 Space Rover Explorer and 31115 Space Mining Mech as examples, and now Castle joins the line with 31120 Medieval Castle.

I must admit that I did not build much Castle as a kid, I was more into Space and Technic. But my brother had some sets, and I still remember the look and feel of them. When the box arrived, I directly re-lived these memories. Just going by the box art, the set looks to be the perfect mix between nostalgic Castle, with updated parts and colours. So let's not waste any time and start building.

Giving you 1246 parts, the main colours in the set are, as expected for the stone walls, Medium Stone Grey/ Light Bluish Gray and Dark Stone Grey / Dark Bluish Gray. The support colours are Reddish Brown, Bright Yellow/ Yellow and Earth Blue/ Dark Blue for the rest of the buildings. It directly gives me the right medieval vibes.

There are no new moulds or prints to be found in the set but there are recolours, as well as a couple of interesting rare elements. 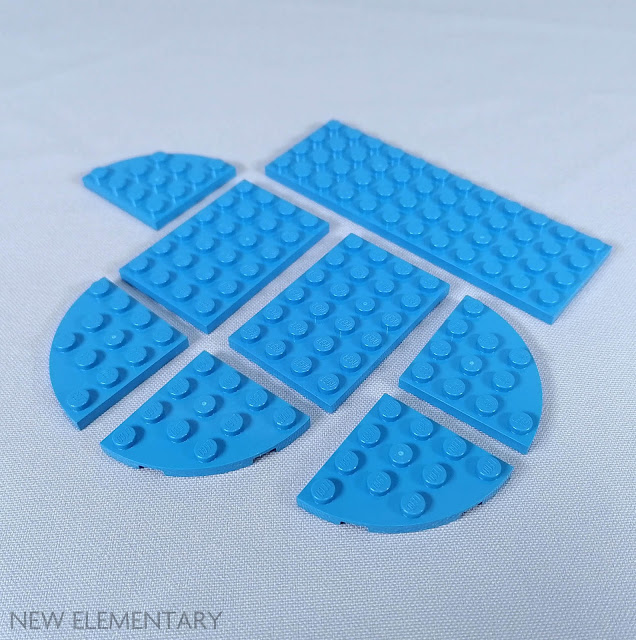 These first recolours are in Dark Azure: 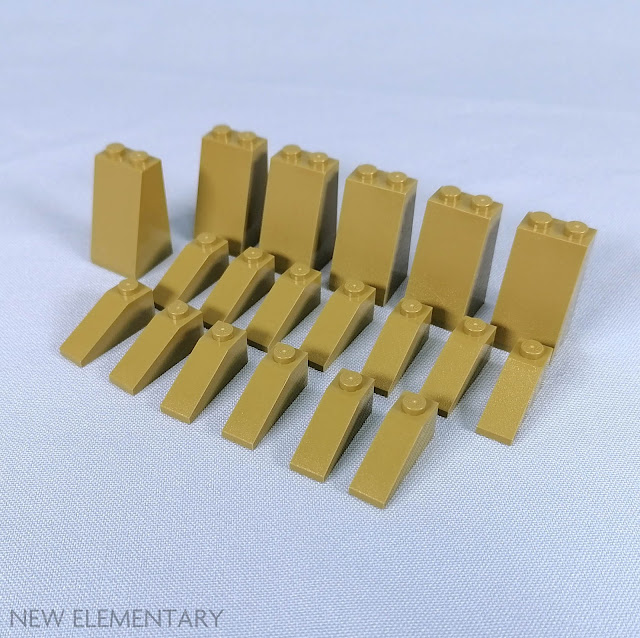 We also get 2 new recolours of slopes in Olive Green: 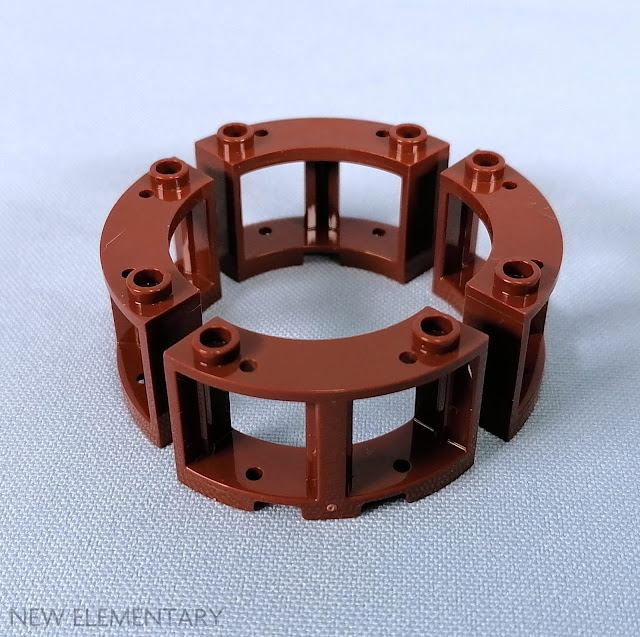 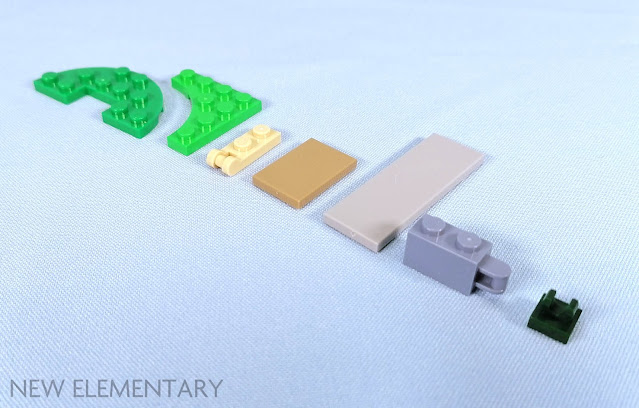 There are 4 minifigs in the set. The skeleton has been done to death (pun intended), but the other figs have some rare parts. The torso of the second figure, Torso Tank Top with Blue and White Stripes, Belt Print, Yellow Arms and Hands in White (6316914), has only been seen in 21322 Pirates of Barracuda Bay. The torso used for the soldiers – Torso Armor, Black and Silver Falcon Symbol, Dark Bluish Grey Cloak print, Pearl Dark Grey Arms, Black Hands in Bright Blue/ Blue (6335192) – has only been seen in 21325 Medieval Blacksmith. The same goes for their legs, Hips and Legs with Blue Coat, Red Belt print in Titanium Metallic/ Pearl Dark Gray (6335666). 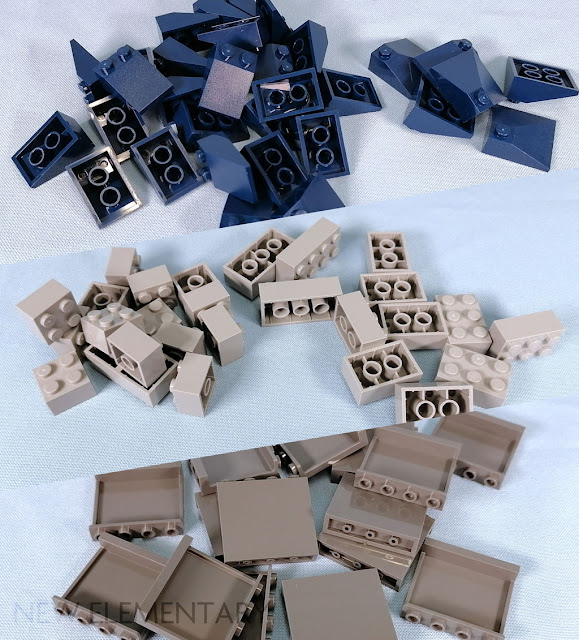 There are some other parts worth mentioning. There is a nice high quantity of Earth Blue/ Dark Blue slopes to be found as well as common 2-module wide bricks in Medium Stone Grey / Light Bluish Gray. The set also brings 15x Panel 1 x 4 x 3 [Side Supports / Hollow Studs] in Dark Stone Grey / Dark Bluish Gray (6008715 | 60581). Not very interesting as a MOC-feeder, but I do like the amount of ‘normal’ bricks in this set. Don’t get me wrong, I like the possibilities of new elements, but a good design respects the classics of LEGO System. There are 354 standard bricks to be found here, accounting for a good 25% of the total.

Building the models in 31120 Medieval Castle

As is to be expected from a 3-in-1 set, there are 3 models in this set. The models can’t be built simultaneously, but they all feature bar-and-clip attachment points. This makes it possible to connect the builds together into a larger castle which will require multiple copies of the set.

Model A consists of 3 buildings. First up is a gate, with a system to lower and raise the drawbridge. At the end of the review will be a video featuring all its moving parts. Judging by the shield above the gate, this is the home of the Silver Falcons. 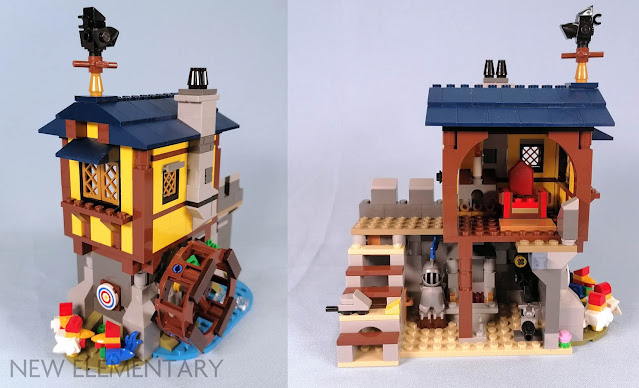 Next is a small blacksmith with a small room above. Cleverly, the watermill utilises the new curved windows. I love the microbuilds of the chickens, crow and mouse. I prefer these brick-built animals usually featured in Creator 3-in-1 sets over one-piece moulds. The hammer of the blacksmith is connected to the watermill, making it hit the sword. 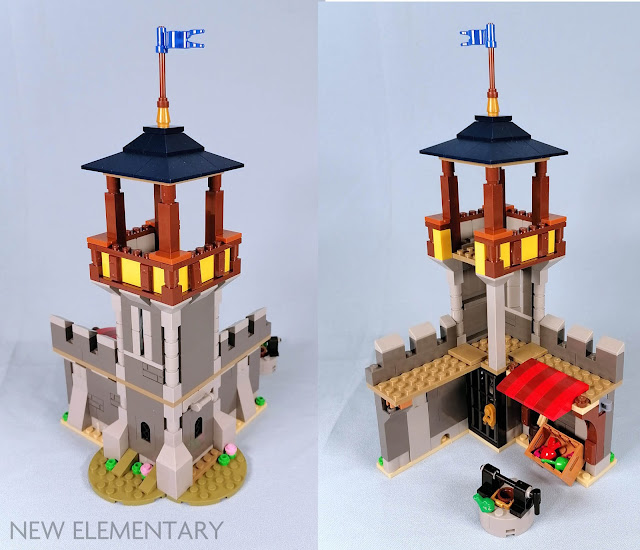 The 3rd building is a wall section with a watchtower. As a cruel form of torture (is there any other form?), the base of the tower features a jail cell with a starving prisoner... next to a food-market. The outside wall of the jail can be pulled out to let the prisoner escape. A cute dragon finishes the build. 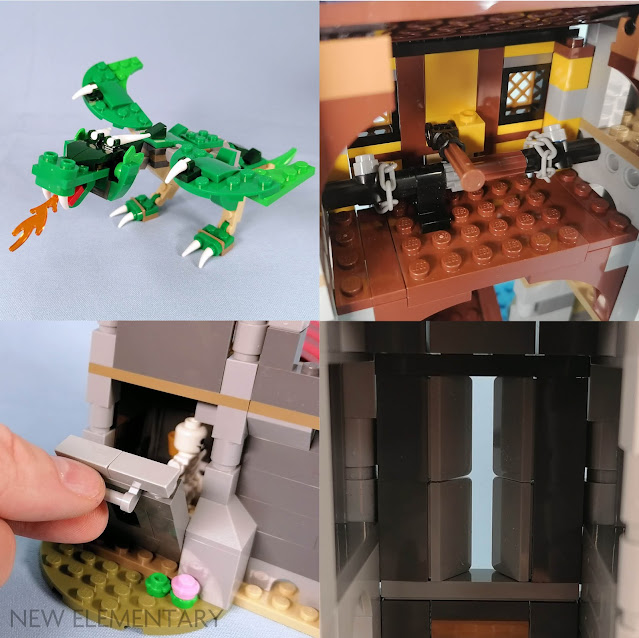 The finished build is just great. The model is packed with small details, and offers both a good play-experience and a nice display model. 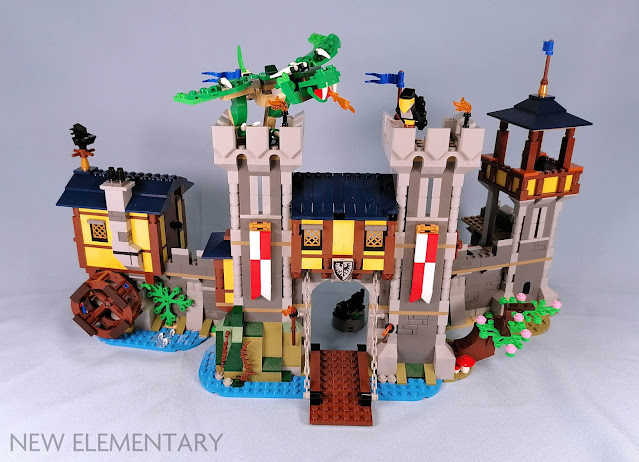 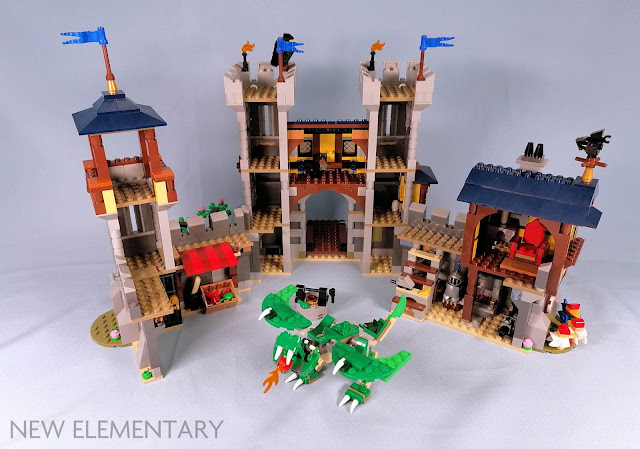 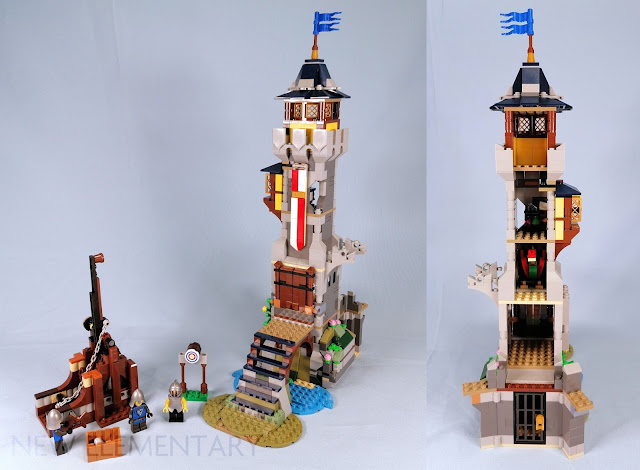 Model B uses 827 parts. It features a large tower, inside of which we find a small room with a book, crystals or flasks, and a telescope. I assume this is the room of a wizard or scientist. Below that, we find a small red and green dragon. At the bottom is a jail. 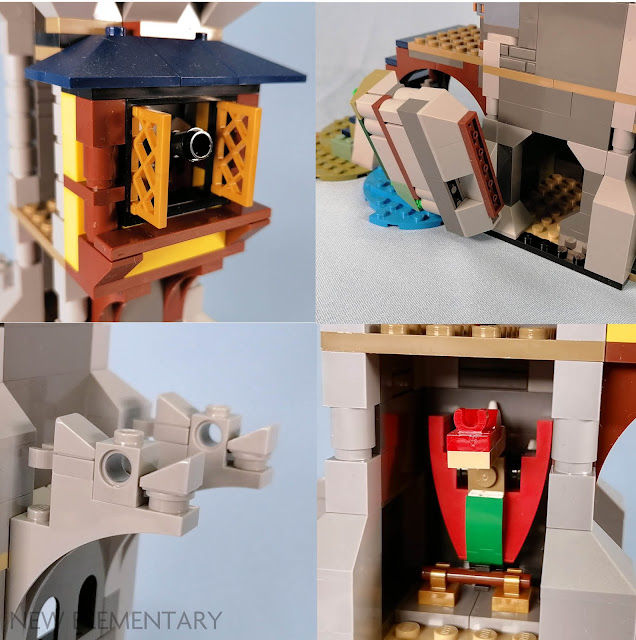 The big rock on the side can be rolled away on a ball joint, giving the option of escape. I love the stone dragon gargoyles. 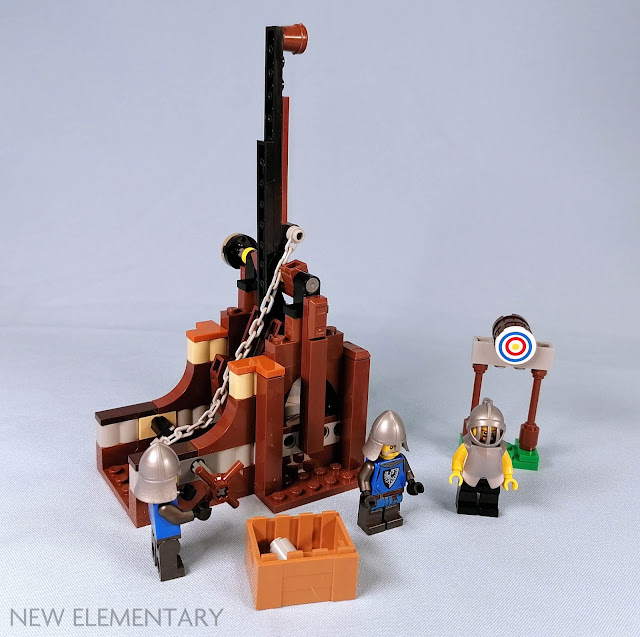 But the best part of this build is a working trebuchet! This is just awesome. Using the winch on the side, you lower the arm. Add a 1x1 round brick, and release! It works flawlessly. There is a small target built as well, so you have something to aim for. See the video on the end of the review for the trebuchet in action. 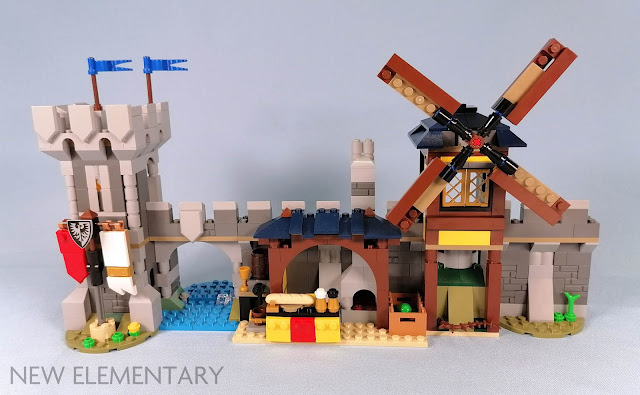 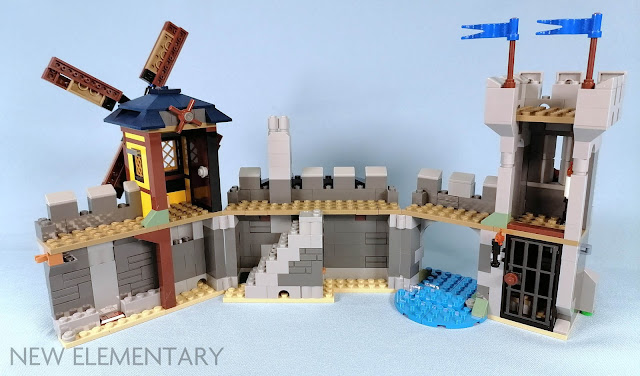 Model C uses 716 parts and features a water gate, another jail cell (how many enemies do they have?) and a bakery with a mill. There are also 2 small loose builds of a tree and a market place. 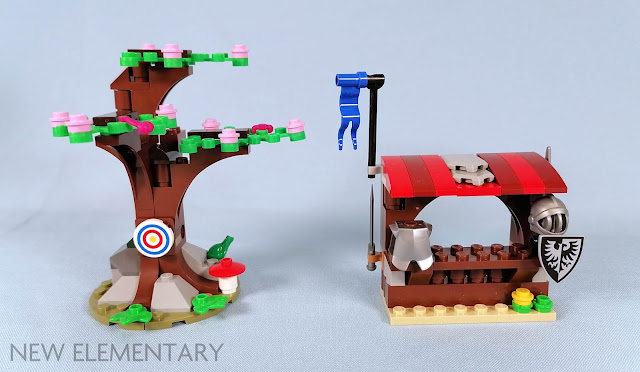 The mill is a nice build, but the rest feels a bit ‘meh’ compared to the other models. 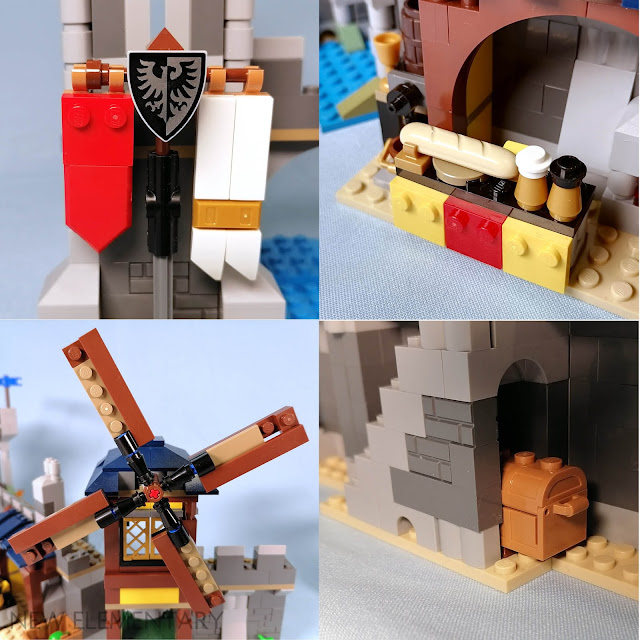 The set features a new experience in terms of part usage and colour scheme, but still captures the nostalgia. From a New Elementary perspective, there are some interesting recolours and rare parts. The only thing I’m not liking is the use of the 1 x 4 x 3 panels to fill the walls. The square shape and lack of texture make it feel like a cheap filler. I would replace them with standard bricks, and some masonry bricks thrown in for more texture. More importantly: it is a great starter pack to create your own castle. 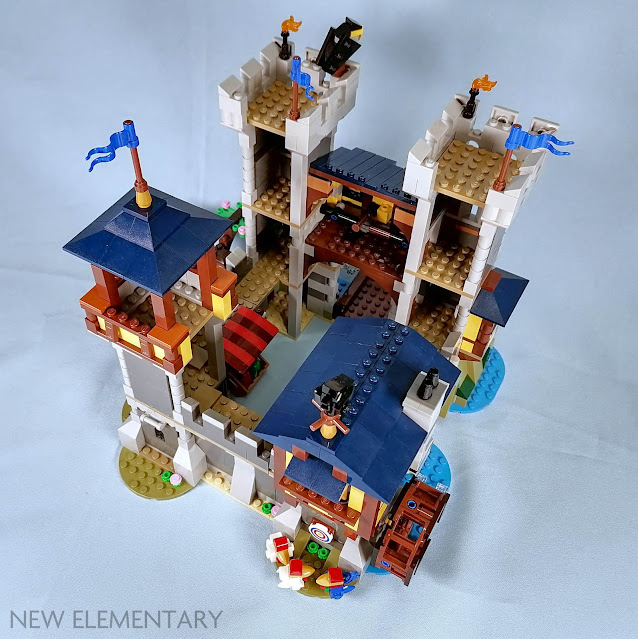 What I did notice, both here and in the other 3-in-1 sets, is a pattern in the builds. Usually, the A model is the best one, with the B model being a close runner-up. The C model trails behind, lacking some of the shine of the A and B model – it’s not bad, and would work nicely as a separate set but next to A and B, it’s just the lesser one. Although I liked the A model best, going by the complete build, I think model B wins out. The tower is a nice design with all the rooms in it, but the trebuchet is the highlight of the set for me. It’s a very sturdy design, and despite shooting a good 40 bricks or more, I had no jams or other issues. The only minor thing is the bucket. The brick fits in it with only the lower dent, making it tricky to load. As promised, some moving pictures of this set's play functions:

I like the fact that all builds can be connected into a larger castle, adding to the playability. You could see this cynically – as a ploy to make people buy multiple sets. But that is just a suggestion; the models work very well as a single model.

I’m not sure if I like the decision not to release a dedicated Castle theme. But if TLG keeps up the quality of these Creator 3-in-1 sets, I can live with it. I’ve already built the 31109 Pirate Ship and 31107 Space Rover Explorer, and I loved those sets. Now, the 31120 Medieval Castle has also won my heart.

READ MORE: 43115 The Boombox is the largest of the upcoming new LEGO® VIDIYO™sets and includes the new 1x5 plate