Lee (@citysoncreation) designs his own alternate model from a 2020 LEGO® Friends set for you today: 41433 Party Boat, which is priced 79.99€/ US$$79.99/ £74.99/ AU$$159.99. Buying this set? Consider using our affiliate links: UK LEGO Shop | UK Amazon | USA LEGO Shop | USA Amazon | Australia LEGO Shop, for other countries 'Change Region'. New Elementary may get a commission. The products in this article were provided for free by LEGO; the author's opinions are not biased by this. 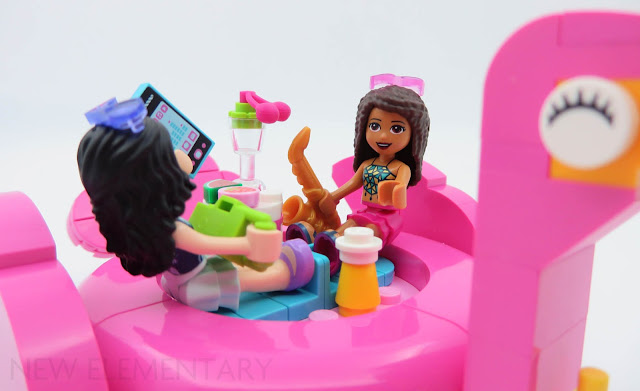 It may be a 2020 set but there is no such thing as a bad time to build and review a LEGO® party boat, so let’s hop on with Andrea, Emma and Ethan to take a break as I examine for you the second-largest boat set in LEGO Friends yet: 41433 Party Boat. Then, I use its parts in my own creation!

Like any typical New E article, I will go through the interesting parts in the set first, as it was the main draw of the set for me as a builder.

There are 5 exclusive recolours in this set: 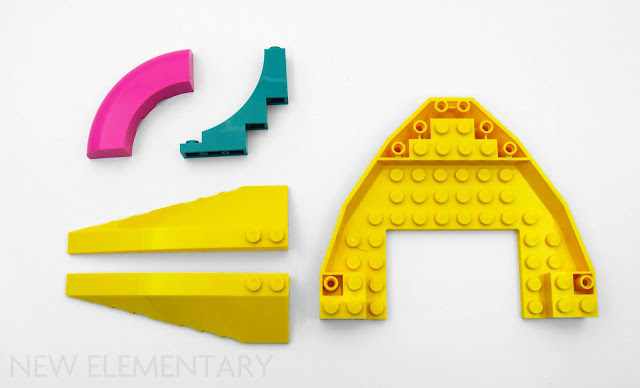 Besides the exclusive ones, there are also quite a number of relatively new recolours in this set: 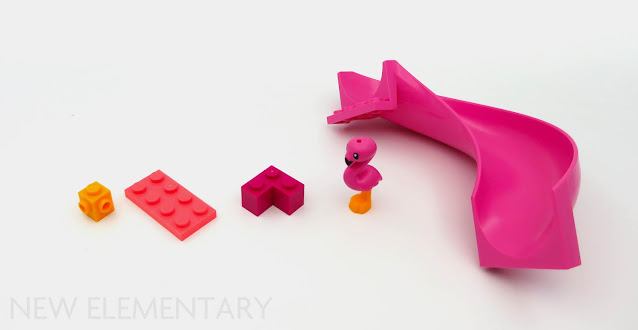 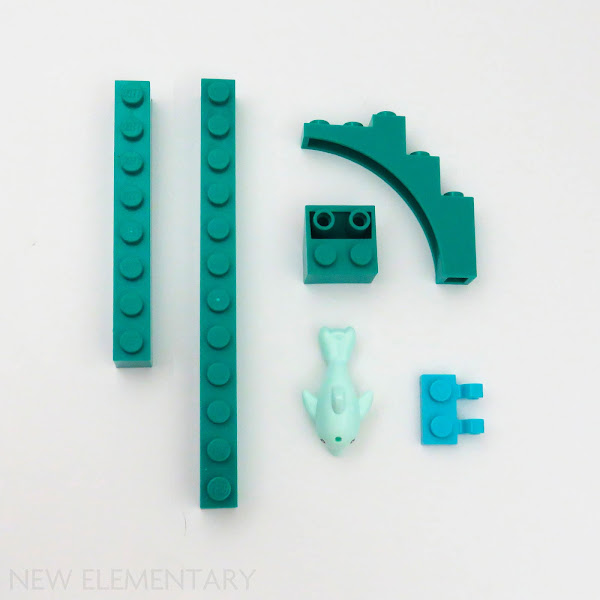 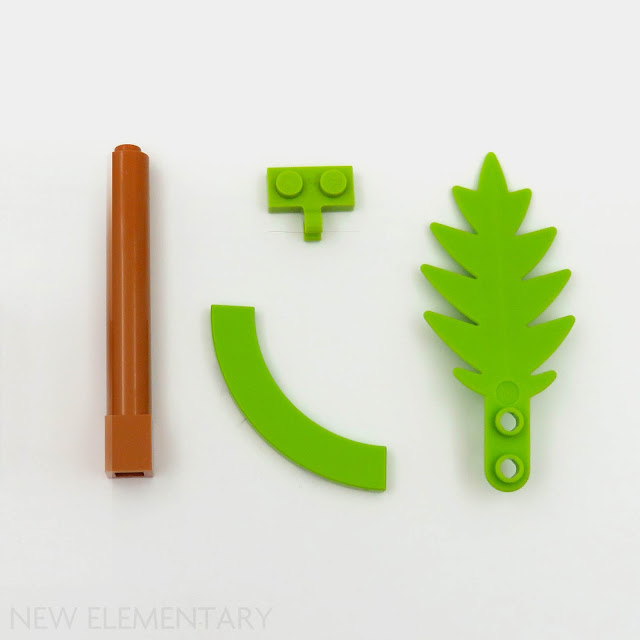 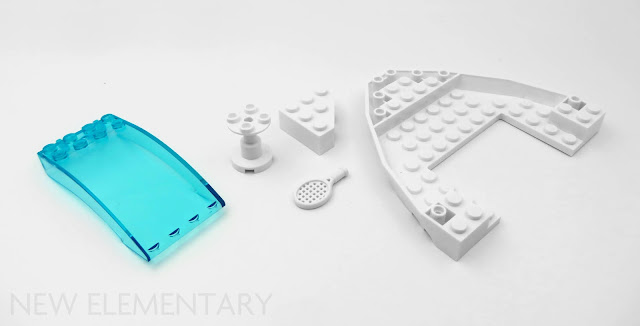 In addition, I also find these two elements from the set worth mentioning: 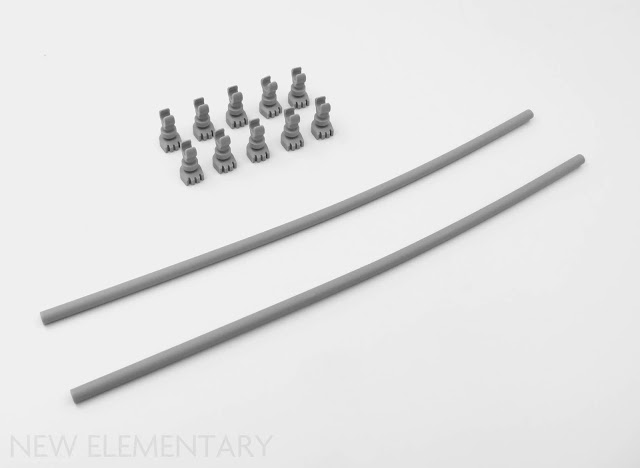 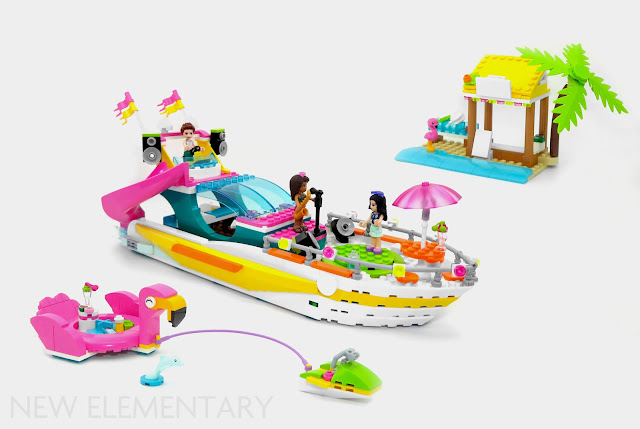 The finished party boat is of a respectable size in my opinion, perhaps even slightly larger than I expected from the box art. Along with the water scooter, flamingo boat and beach store, it almost feels a little underpopulated for a playset. That said, I may simply be a bit spoilt by the generous minifigure line up in many other recent sets. 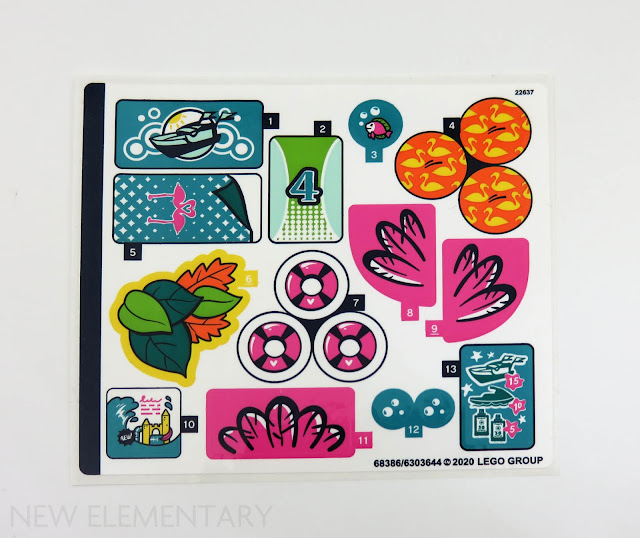 The set does include quite a number of stickers, which I have left out for the review. As someone who applies his stickers in sets most of the time, I actually think this is one of those sets where the stickers are not particularly essential, thanks to the colourful nature of the build itself. 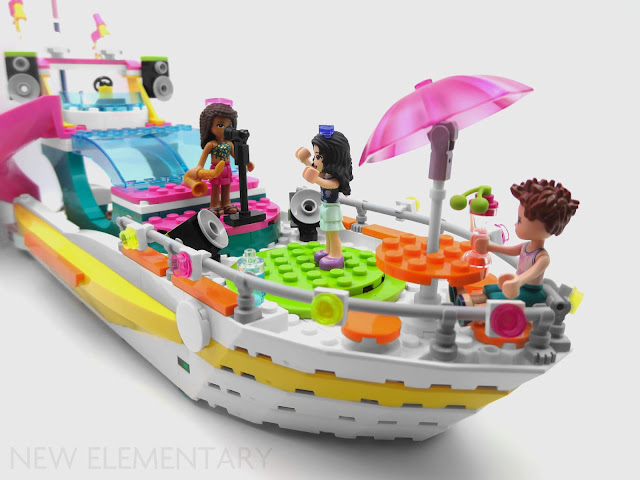 The front of the boat is where the party happens, with a Dark Pink stage for our music lover Andrea to perform, a Lime dance floor for Emma to dance to the music, and a Bright Orange/ Orange set of table and chairs for Ethan to just sit back and relax. I like how everything is colour-coded with such vibrant colours, and the White of the boat makes everything pop without clashing with each other.

The dance floor also has a simple mechanism for kids to play with, driven by a knob from the back of the party boat. This is nothing groundbreaking, but it was a pleasant feature for sure. You can see the play function and the knob in the video below. The choice of using a red 1x2 Technic brick behind the knob was a little distracting to me, as I really appreciate how subtle the knob was, yet the red brick kind of undid the magic. You can also see the comfy relaxing zone at the back of the boat, again distinctly colour-coded in Medium Azure.

The more eye-catching feature though, would definitely be the water slide on the side. However, while I was having fun dropping Ethan from the slide over and over, I became a little concerned for his safety, as he seemed to be sliding right into the engine area and bounced off of it. 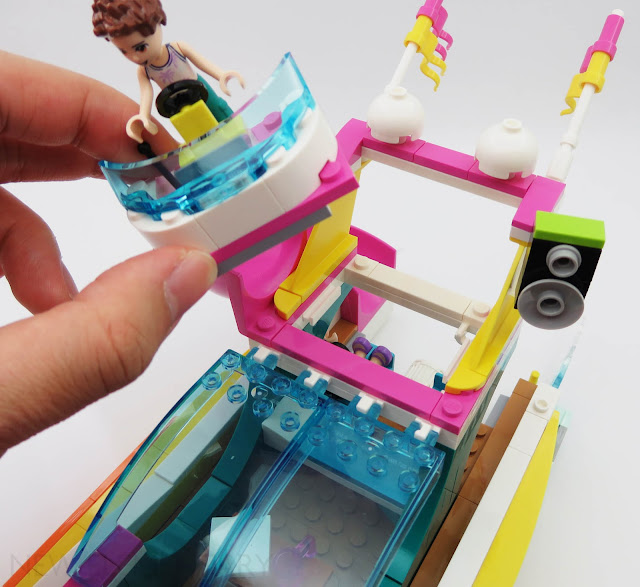 Upstairs is where you can steer the boat, and I appreciate how it can be taken off for easier access to the resting area below. 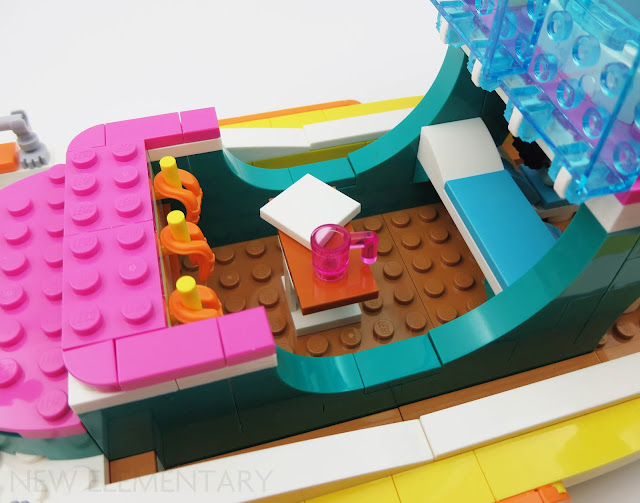 Inside the small cabin, you also get some storage space for the life jackets and a small table, and a proper bed for a quick nap. I like how the combination of the three different Dark Turquoise arches create such an elegant geometry here. Simple yet elegant. 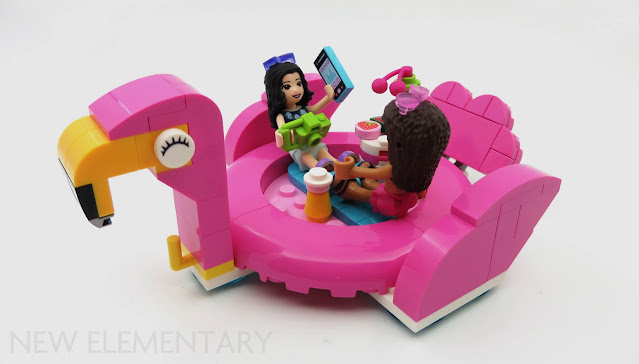 The flamingo boat is perhaps my favourite part of the set. It has such a personality with all that Dark Pink and its smooth curvy shape, even without putting the stickers on. Two minidolls can sit comfortably on it to share some snacks and drinks.

While it is suggested on the box front to have the flamingo boat dragged along by the water scooter, I prefer to have it parked near the party boat, but I am glad that options are provided. 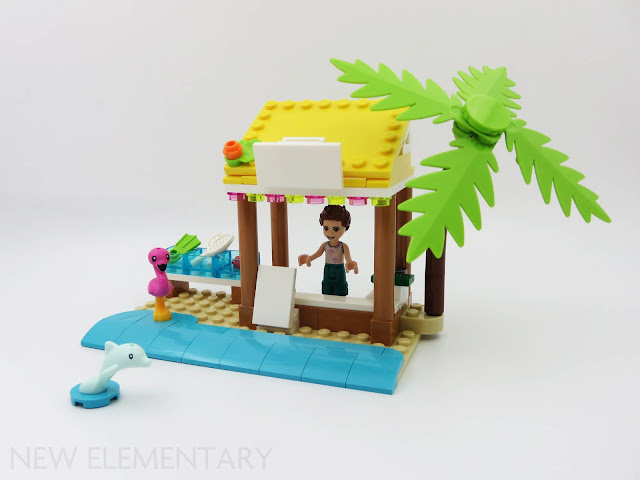 Lastly, there is the tiny beach store renting out beach kits and the water scooter. Since we are a bit short-handed here, I have Ethan again to stand in as the shopkeeper. Nothing too interesting with the build, but the combination of colours are definitely pleasant to look at and give a strong summer vibe. 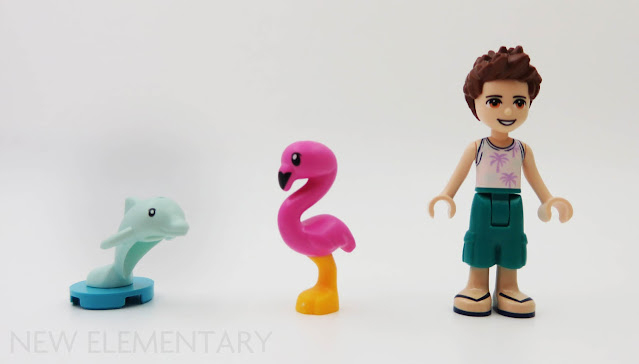 Last but not least, here is a size comparison of the two baby animals included in the set, standing next to minidolls. Each of the animals has the small hole for some typical Friends accessories on top.

While I never limit my LEGO collection to a single theme, this is in fact my first Friends set since their introduction in 2012. Despite being a well-designed party boat, I must confess that I am not much of a party person. 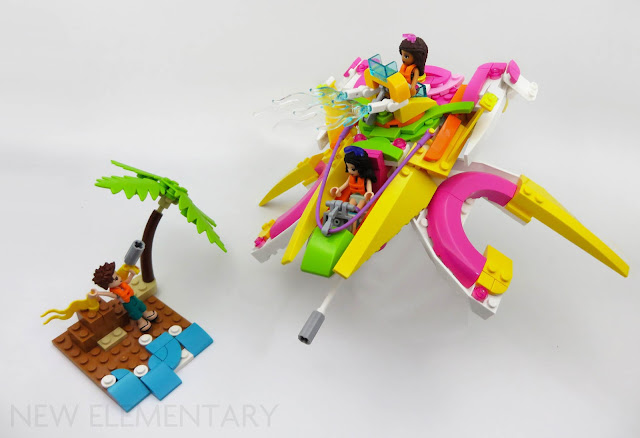 I soon found myself a little bored by it and decided to build something slightly more action-packed with it: a water fight at the beach. They may be friends, but I think Ethan probably didn’t get notified what kind of a “water fight” Andrea and Emma had in mind. 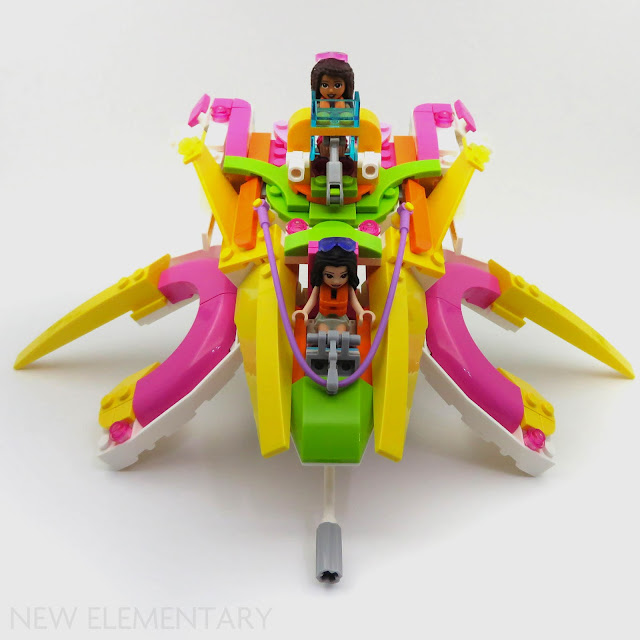 I don’t build a lot of vehicles myself, but it is always fun to venture outside your comfort zone as a builder. I also thought it was quite interesting to build a cool cyber-vehicle from an ordinary party boat in such bright colours. 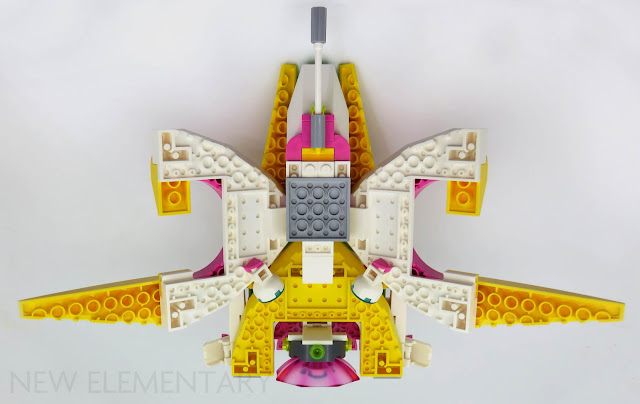 When I first started trying to put together an alternate build from this set, I found the amount of large elements to be quite intimidating, but I also wanted to embrace the challenge and use as many of them as I can. I am quite happy with the way the Boat Hull Sections (47404) are joined at an angle and form the bulk of the vehicle. 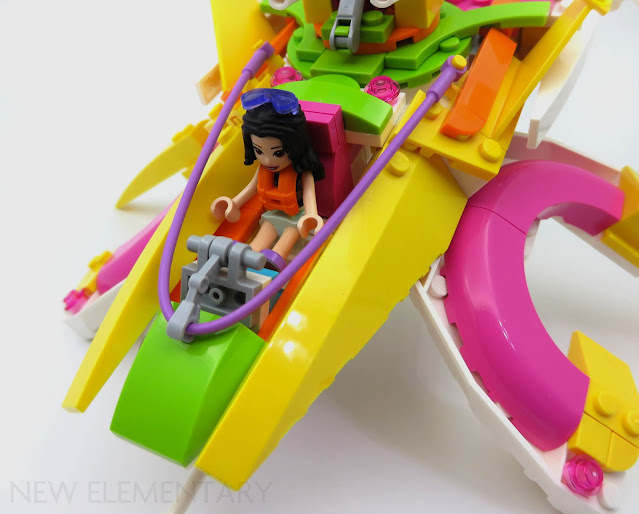 The cockpit is another area I am quite satisfied with, as I get to use the exclusive Wedges Curved 10 x 3 in Yellow and fit the Lime Wedge Curved 4 x 3 No Studs (6215026 | 64225) so naturally between them. The Medium Lavender Flexible Zipline, 22L with 2 Connectors (6200551 | 27965) also adds such a nice curvy outline to the otherwise rather boxy cockpit. Emma is safely secured by the Panel 1 x 2 x 1 with Rounded Corners and Central Divider (93095) angled from the front. 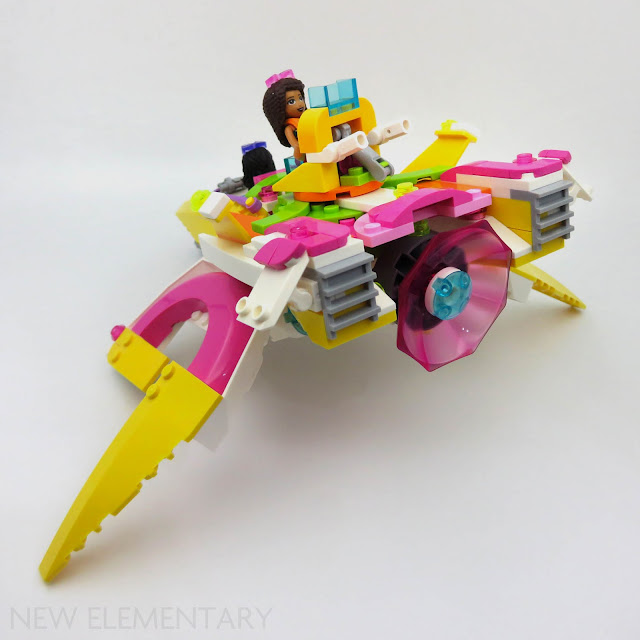 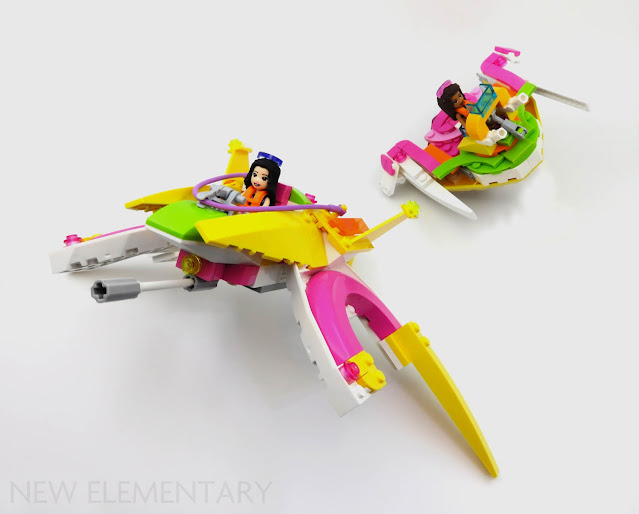 I think both water jets have such unique personalities to their shapes, but I still favour Emma’s one a bit more because of its cool wing geometry, formed again by the exclusive Yellow Wedges Curved 10 x 3 and Dark Pink 1/4 Arch Bricks 5 x 5 W/Cut Out. 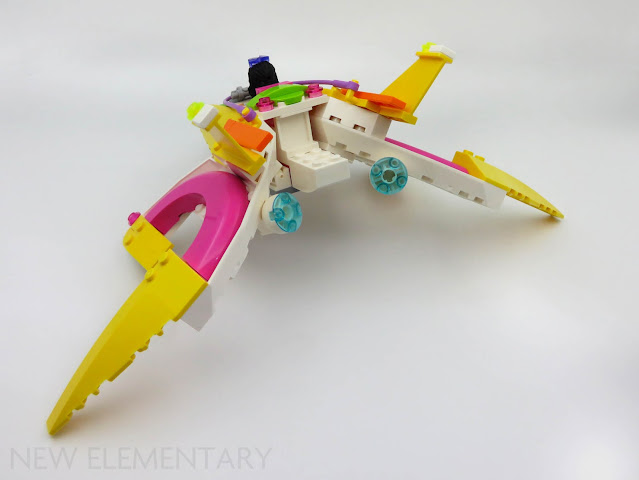 There is also a separate set of exhaust at the back of Emma’s water jet after the split. The tip where Andrea’s jet parked becomes a handle, making this model quite swooshable on its own.

Andrea’s jet has a much simpler construction, but it is still fun to swoosh around nonetheless.

As briefly mentioned above, I find this set to be a decent set. It is what it sets out to be - a well-designed Friends party boat for a relaxing day at Heartlake City. I can’t say I enjoyed the post-building experience with the model as much as I do for sets from other more exciting themes, but I don’t think I was the target audience to begin with. That said, the best part about LEGO sets is that there is always more you can do with the sets than what is shown on the boxes. This set does offer quite a lot of interesting parts and colours, and I had a lot of fun building the water jets out of it. The post-building experience of any LEGO set is entirely up to you, and only limited by your imagination.