Nicolas Geeraert, a UK-based builder and former contestant in LEGO® Masters, is our special guest reviewer today. He's taking a look at the parts in the 2021 LEGO Super Mario set 71383 Wiggler’s Poison Swamp. Buying this £34.99 / US$39.99 / 39.99€ set? Consider using our affiliate links: UK LEGO Shop | USA LEGO Shop | Australia LEGO Shop, for other countries 'Change Region'. New Elementary may get a commission. The products in this article were provided for free by LEGO; the author's opinions are not biased by this. 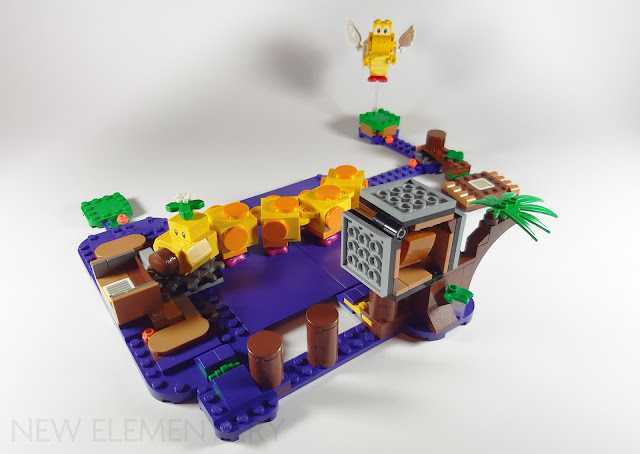 Alongside the Character Pack Series 2, a series of LEGO® Super Mario sets was released at the start of 2021 including 71383 Wiggler’s Poison Swamp. This is my first experience with the Super Mario sets, and so the lack of a Mario figure prevented me from reviewing the gameplay, but that should not spoil the fun. The set brings some great new parts and recolours, with a new SNOT element as the highlight. 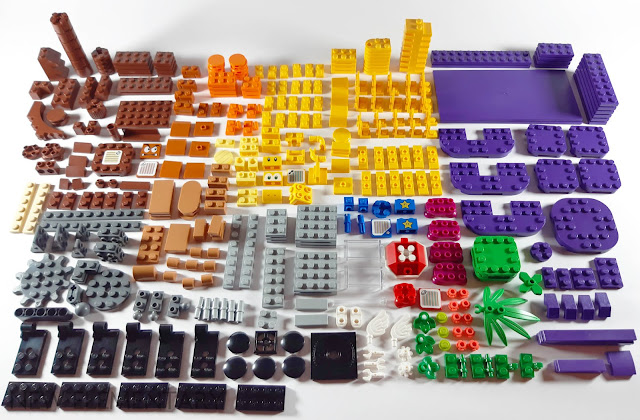 I started by laying out all 374 elements. In terms of colour palette, the set is dominated by the presence of dark purple and yellow, alongside a more neutral palette of browns and greys.

Growing up in the 1980s, I remember being in awe of the revolutionary Nintendo console and its flagship game, Super Mario Bros. However, as a kid I never owned a console and thus I confess that my knowledge of the Super Mario universe is somewhat limited. Luckily, unlike the ‘80s, I can now look up the backstory of the video game using the internet. 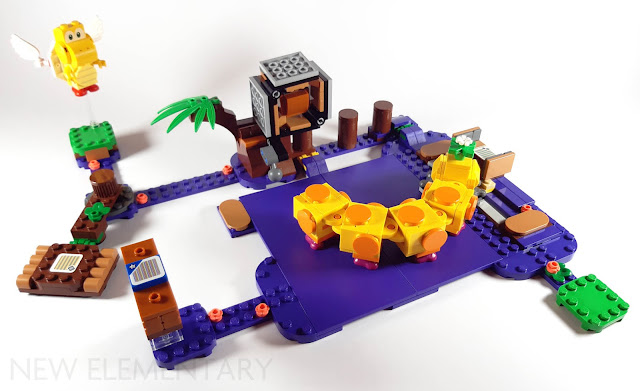 Overall, I had fun building the 71383 Wiggler’s Poison Swamp. The poison swamp is part of the Soda Jungle theme from the video game. Aimed at a younger audience, the building experience is relatively simple and straightforward. The final build consists of a series of modules that can be arranged in a number of ways, one of which is shown above.

Three brick built characters are included in the set: a Goomba, a Koopa Paratroopa and a Wiggler, which is the caterpillar-like creature. In the absence of a Super Mario figure, I created one to assist me in demonstrating one of the play features. 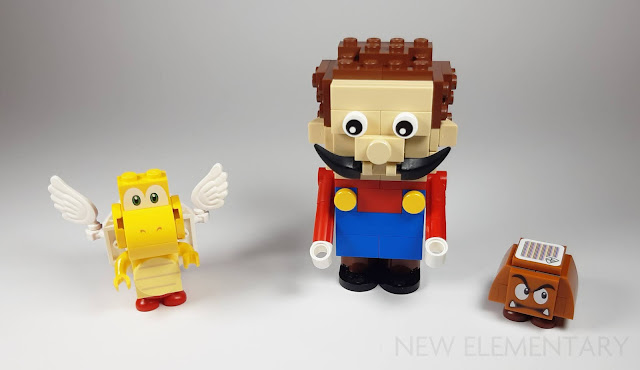 Mario can be made to slide the little cart back and forth. This causes the wiggler to start swirling, which in turn releases the bridge for Mario to cross. It is a nice feature, and I imagine it would be fun for the target age group.

The segments of the wiggler are constructed using three double jumpers in Bright Yellow/ Yellow (6228602 | 34103) and some clever snot techniques. 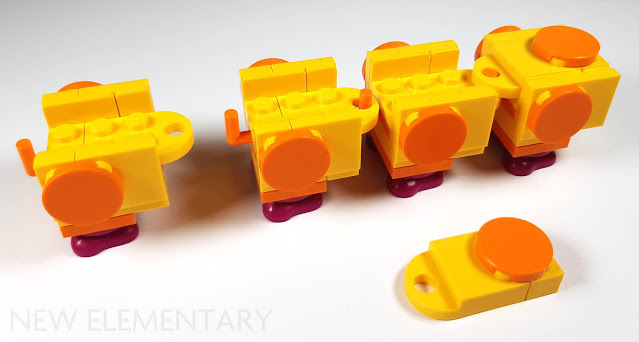 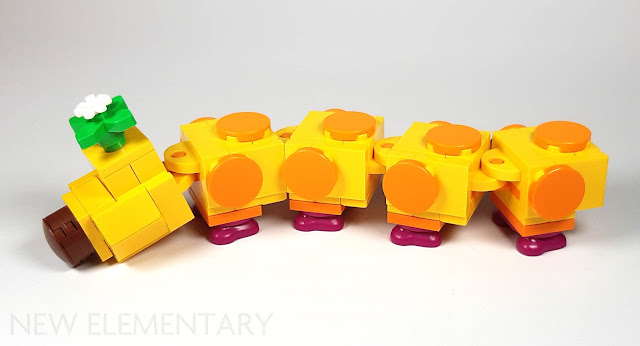 Although the final wiggler is less rounded than the source material, it is an elegant build. Unlike the segments of the main body, the head is not supported underneath, which causes the head of the wiggler to droop a little. Although the head is intended to rest on a base plate, I would imagine that kids may want to play with it on its own, thus the sagging seemed to indicate a minor design flaw. 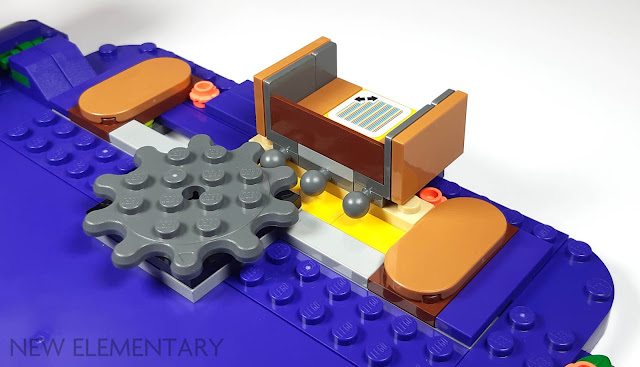 We already knew the gears could be adapted to function as linear actuators, however at New Elementary we hadn’t seen this particular technique. It is a nice demonstration how new elements are designed to fit into aspects of the existing system.

Comparing the new SNOT bracket with some of the existing ones, the new inverted bracket provides a nice addition to the family. A series of other ‘upward’ brackets (in Black) and ‘downward’ brackets (in Medium Stone Grey/ Light Bluish Grey) are shown for comparison.

Comparing the downward and upward brackets, there clearly is scope to extend the family of downward brackets as well. In the current set, the new brackets are used to expand a wider bracket (a 1 x 2 – 2 x 2) in both the wiggler and the cart. However, it definitely also opens up a number of possibilities for SNOT work in MOCs. I imagine this will be a popular element.

A range of elements have been recoloured in Medium Lilac/ Dark Purple: 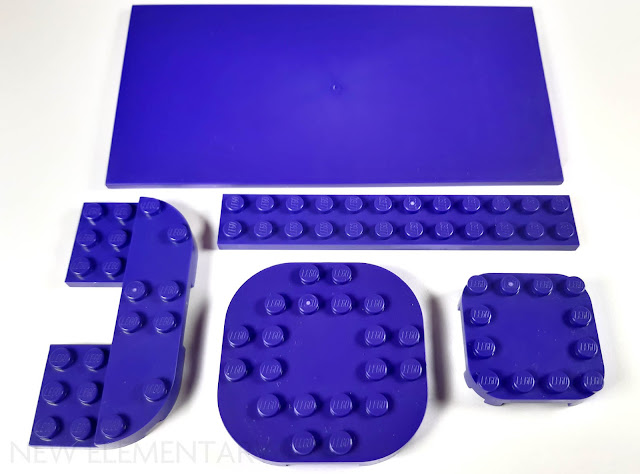 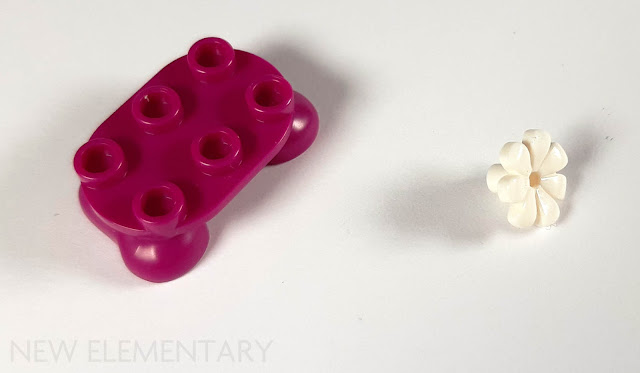 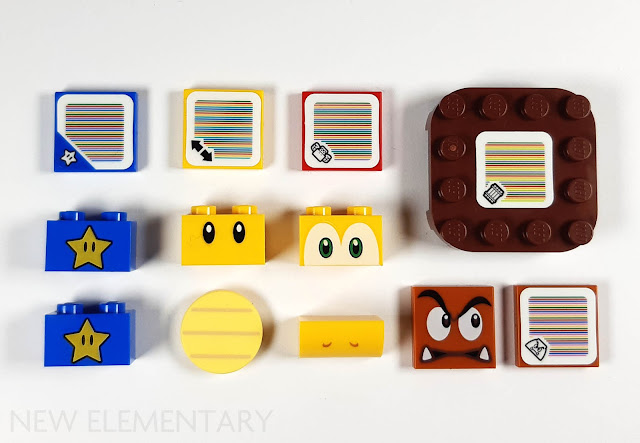 The set also contains a number of printed parts as shown here, some of which are new and unique:

Some of the ubiquitous barcodes are also included:

I imagine we may see some of these barcodes eventually making their way in Mindstorms MOCs.

71383 Wiggler’s Poison Swamp continues expanding the universe of LEGO Super Mario. Some of the play functions will definitely appeal to younger fans. More importantly, this set also heralds the arrival of a new bracket piece, which will be particularly useful for SNOT work in MOCs.

If you're buying from LEGO.com, consider using our affiliate links: UK LEGO Shop | USA LEGO Shop | Australia LEGO Shop, for other countries 'Change Region'. New Elementary may get a commission.