Tim Goddard (@tim_goddard928) reviews a 2020 LEGO® City set today with an interesting inclusion: magnets! Buying 60243 Police Helicopter Chase? Consider using our affiliate links: UK LEGO Shop | USA LEGO Shop | Australia LEGO Shop, for other countries 'Change Region'. New Elementary may get a commission. The products in this article were provided for free by LEGO; the author's opinions are not biased by this.

Last time I looked at a brief history of LEGO® magnets, today I look at the 2020 return of the magnet and one of the two sets that these new offerings come in. But before the pull of the magnets overwhelms us, let us have a look at the rest of the set. 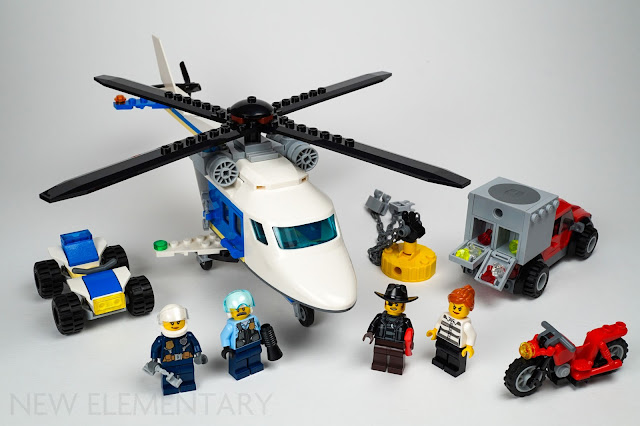 This is a fairly basic set, at least by New Elementary standards, and so something that AFOLs may easily overlook. It is the kind of set designed to appeal to younger children who might just be able to pester a parent into buying it for them during a trip to the supermarket. It offers good value for money and plenty of play value and I have often seen it available on discount.

It has a certain 1980s action film vibe. There are 4 minifigures, 3 of which are unique to the set. The helicopter pilot is called Sam Grizzled and he has a big grey moustache. I bet this is his last investigation before he retires, I hope he is careful! The other named character is the villain Snake Rattler. You can tell he is the villain because he has an eye patch, a big hat and a crowbar. The other two characters are unnamed females; an ATV rider and another villain with a striped white and grey prisoner outfit on.

The set portrays a classic chase: a van which perhaps inadvisably advertises its contents with a giant diamond on the side has been stolen, accompanied by a presumably stolen motorbike.  The police give chase in an ATV and a helicopter armed with a standard issue giant magnet. 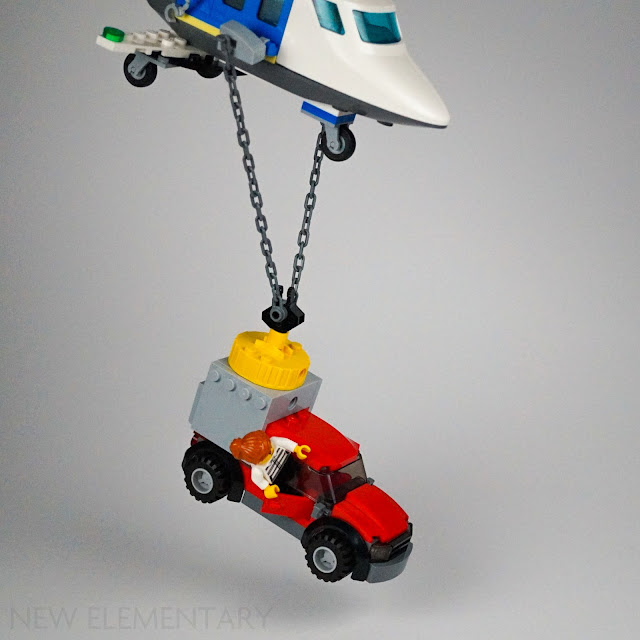 I defy anyone not to enjoy chasing down and picking up the van with the helicopter magnet. 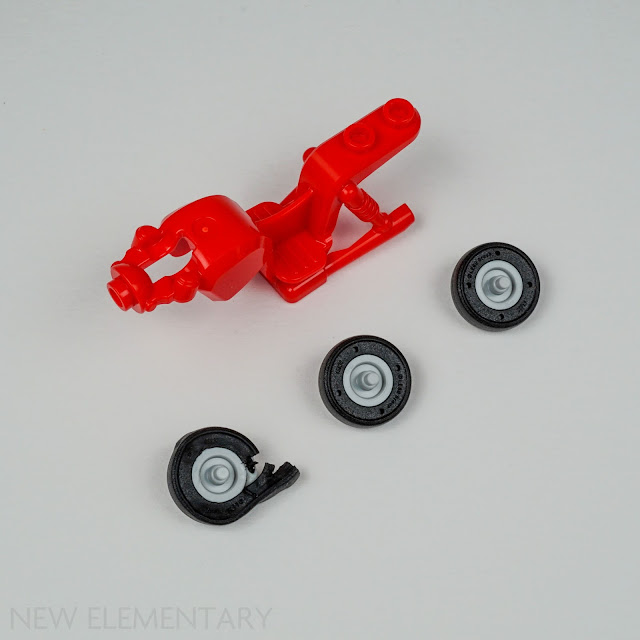 The new wheel has a rubbery tyre which is almost fused with the hard plastic hub. As you can see I tried to separate them in the interest of research but it proved impossible; there are holes in the hub which the tyre is moulded through and into. I am slightly sad to see this new wheel design as it is likely to mean the retirement, or at least reduction in use, of the venerable pulley wheel, Wheel Centre Small with Stub Axles (3464 – you can see one attached to a magnet holder in my previous article). The pulley wheel is one of those rare elements which is both small and can be used to reverse the direction of build by 180 degrees; the centre of the hub is a stud width in diameter.

There is a surprising sprinkling of Cool Yellow/ Bright Light Yellow which looks great against the blue of the helicopter: 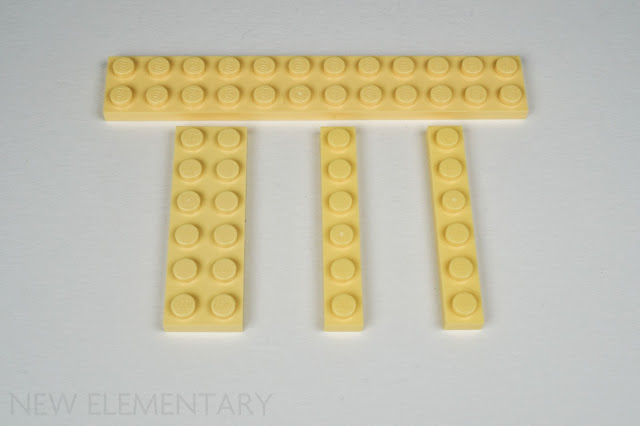 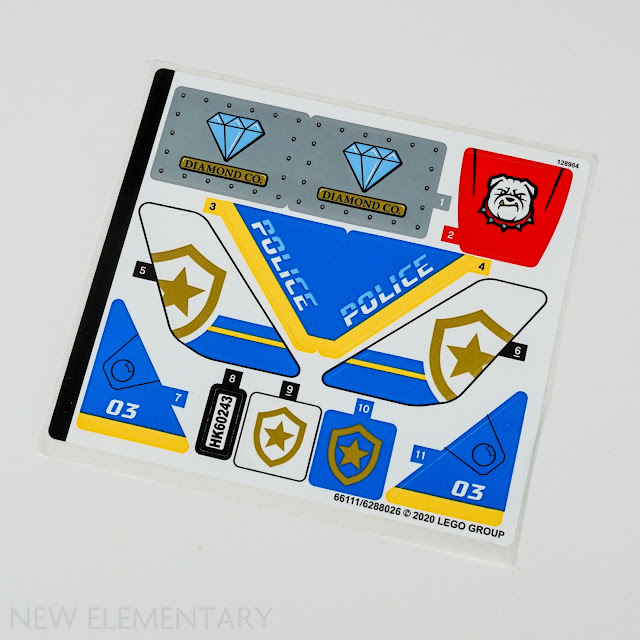 The helicopter in particular relies on stickers to finish the design, I have not applied the stickers so here is the sticker sheet for your information.

The main event of course are the two new magnet counterpart composite pieces:

Both have a round dark grey circle sealed into the main body of the piece with an inset horseshoe magnet design.

When you pick either up the first thing you notice is that they rattle. The actual magnet is loose inside which is a rather inspired idea; it means that there is no problem making sure your magnetic poles are lined up, the magnet just flips over and lines up with whatever magnet you want to attract.

Both pieces are rather large compared to older LEGO magnet designs but presumably this is to make them impossible to swallow. The large size did rather put me off when I first saw them but they are nicely designed and, as with every LEGO piece, the main limitation in use is your imagination.

In what is not a massively radical move, I decided to build a crane but not just any crane: a spacey crane! 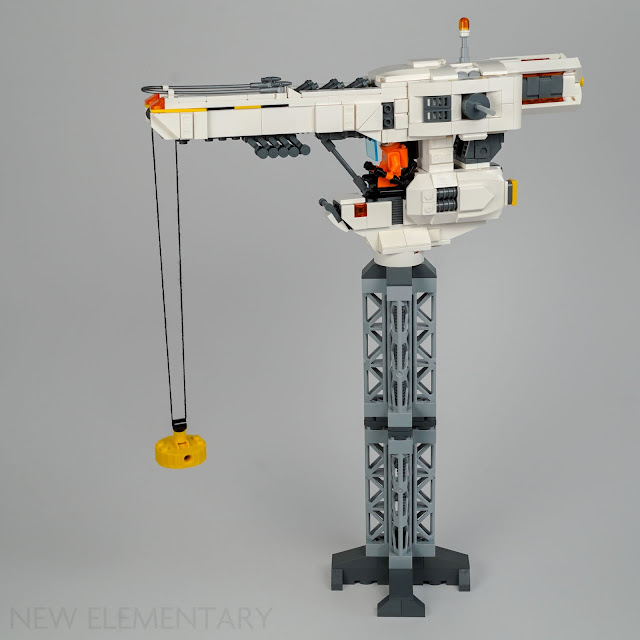 The magnetic space sets of old were all about moving containers so this was my inspiration. The first one I built proved a little too heavy so I built a slimmed down version and this held just fine. 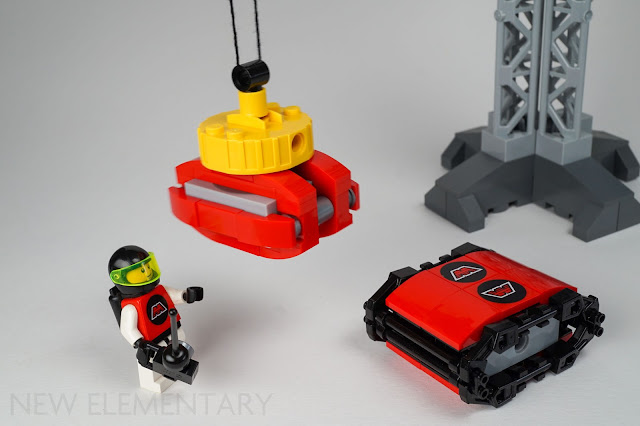 Even wrapped inside a plastic case the magnets are pretty strong but just how strong are they compared to the venerable 73092? Let us find out! 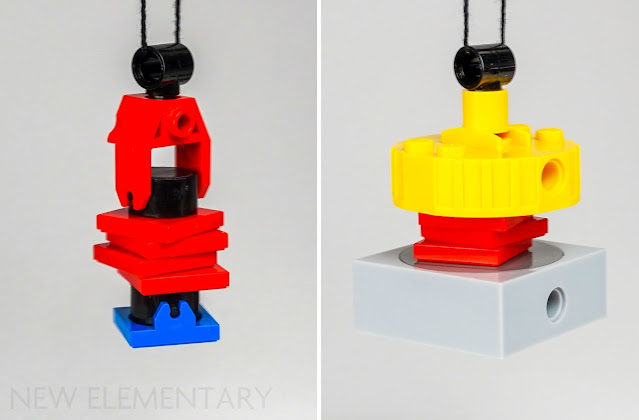 The new system (right) can cope with 3 tiles between magnets and still hold. Can the old system (left) beat that? Yes it can, 4 tiles and it can still lift! Impressive.

Not the most scientific of tests and the difference between the two systems are not poles apart. No doubt the actual magnets in the new pieces would be stronger if freed from their plastic prisons but from the practical aspects for building, the old pieces win.

The older magnets are likely to be a ferrite material; a mixture of mostly iron oxide. The newer ones are likely to be newer, stronger neodymium-containing magnets which allows them to be strong enough even when encased in plastic. But enough with theorising, let us take a look inside! 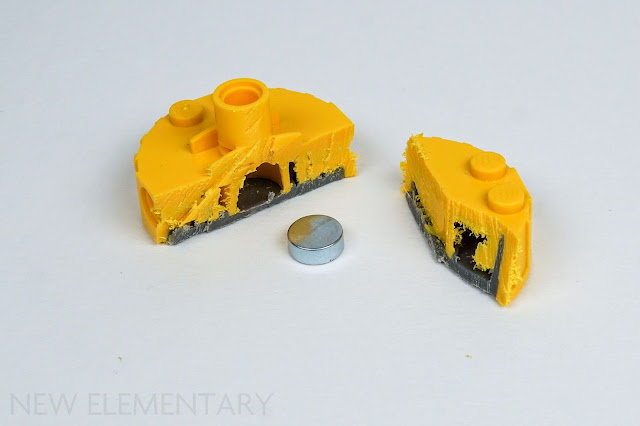 And wow is this tiny magnet strong, it takes quite some effort to separate it from another. It has much more power than the old magnets.

One last thought, the beauty of magnets is that they are backward and forward compatible; yes your old magnets will work just fine with new! 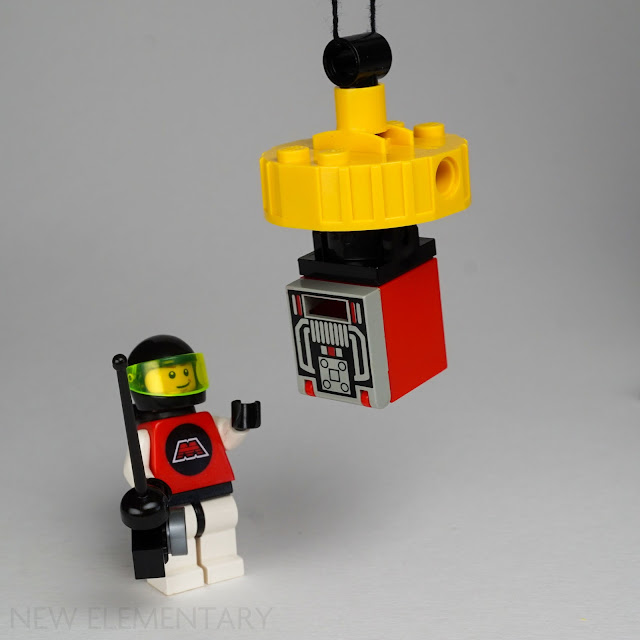 Posted by: Admin Posted on 4/02/2021 04:41:00 am
Email ThisBlogThis!Share to TwitterShare to FacebookShare to Pinterest
Labels: City, MOC, Set review