We turn to Inthert once again for our next LEGO® Monkie Kid review: 80007 Iron Bull Tank, and he has also reimagined the set by using it as a base to create his own version! The products in this article were provided for free by LEGO; the author's opinions are not biased by this. 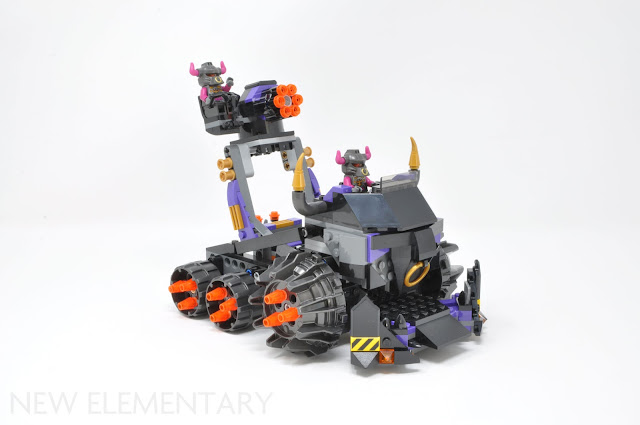 Aside from parts that are almost ubiquitous across the entire Monkie Kid line (which we’ve previously covered on New E), the Iron Bull Tank contains only a light dusting of noteworthy elements. 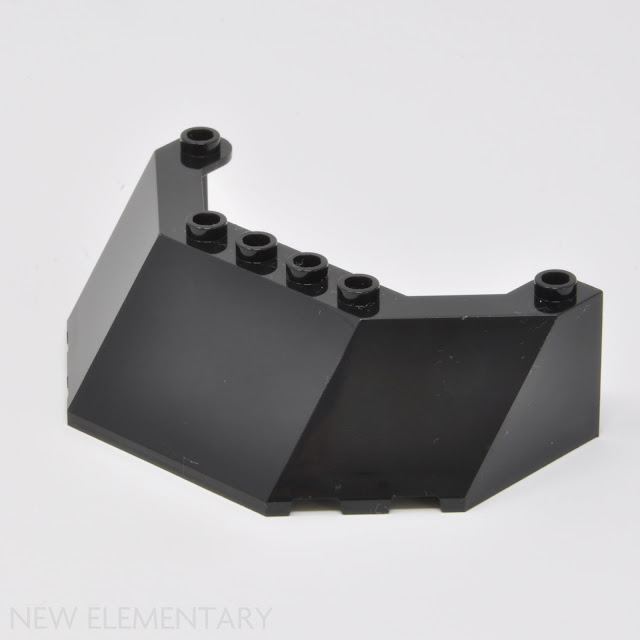 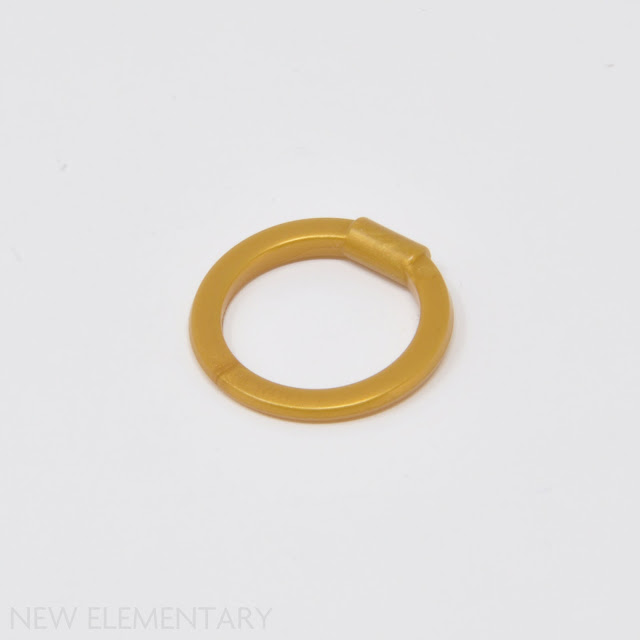 Once again, the AFOL in me is left a tad disappointed. The build process has the usual intuitive steps, efficient use of brackets and a good deal of sturdy Technic construction too - but nothing that feels especially groundbreaking. In fairness, we can hardly expect the build process of a set with an emphasis on play features and durability to also deliver a wealth of jaw dropping techniques. Sometimes a playset is just that - and rightfully so! 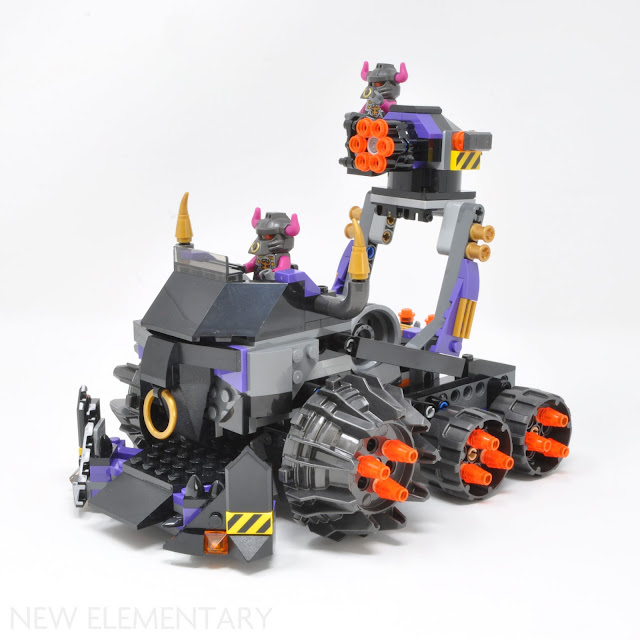 If it’s intimidation the Bull Clones are aiming for, I think they’ve succeeded! As you’ll no doubt have noticed, the finished model has some not-so-subtle and fun design cues that make it resemble its namesake. 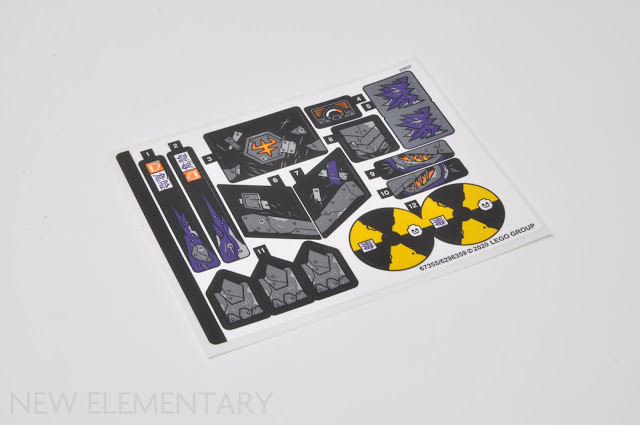 I’m sure the likeness would be even stronger had I applied the stickers but even without them, it remains a rather menacing looking vehicle thanks to some well-chosen spots of texture. 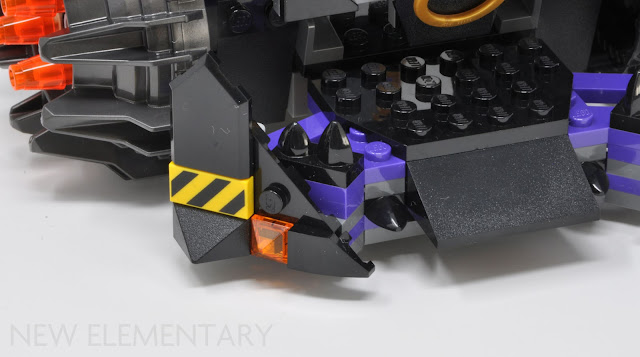 The bulldozer blades in particular have a good selection of modified tiles, slopes and wedge plates breaking up their otherwise uninspired flat surfaces.

The tank might be lacking in new parts and especially interesting techniques, but one thing it’s not short on is play features! A prominently mounted 6-stud rapid shooter catches the eye first. Its elevated position and turntable base provide a great range of motion for those intent on exacting imaginary destruction. 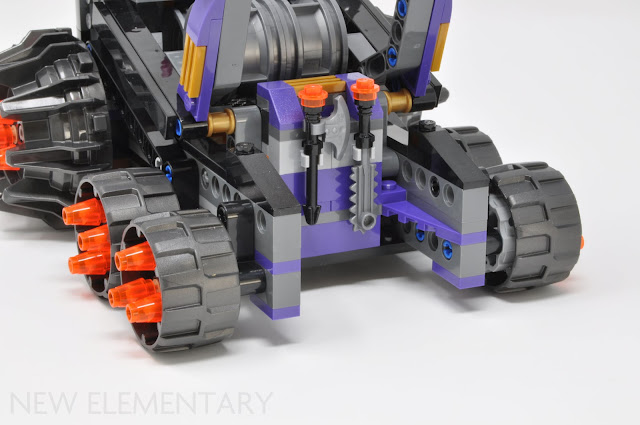 A small but appreciated inclusion are the clips for Grunt and Roar’s weapons at the rear of the tank. It’s a shame the surrounding area is a little devoid of detail though.

Now for the headline play feature: it’s both an additional form of attack and a transformative function.

Pushing the turret down (or the less satisfying method of lifting the cockpit up) will cause the tank to release its deadly cargo of oil barrels. Though if the sticker sheet is anything to go by, they’re also radioactive - twice the danger! 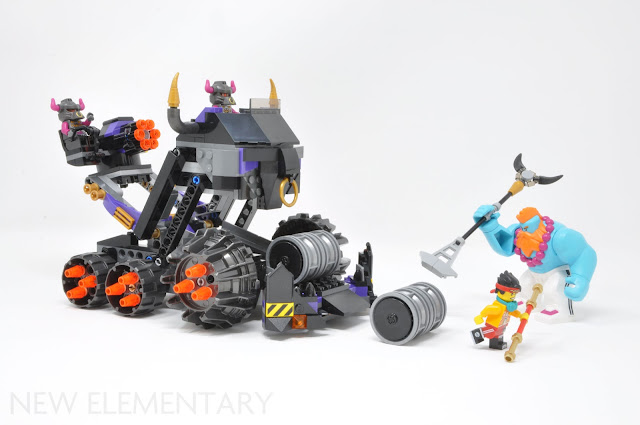 Here the inclusion of Sandy the big fig makes sense - while Monkie Kid has no hope of repelling such a dastardly attack, Sandy’s size and sure footing stops the barrels dead in their tracks. Though basic in principle, the release mechanism feels very smooth and is surprisingly addictive to perform repeatedly. 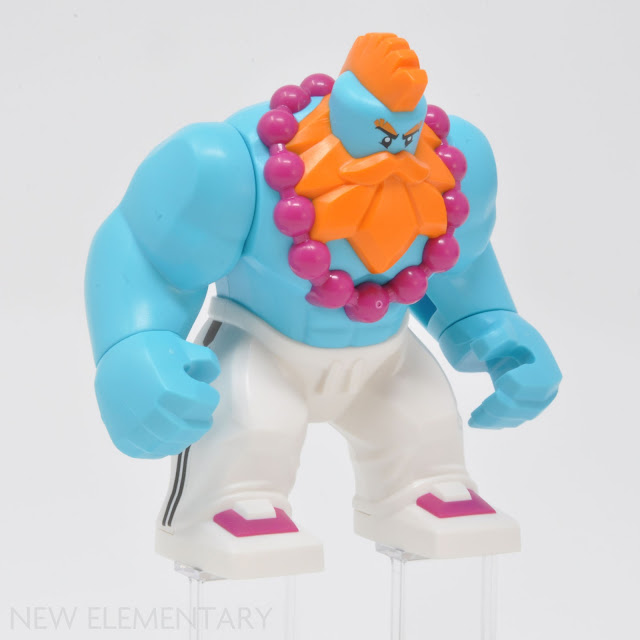 Besides the play features, the Iron Bull Tank does have some other positives to note. One being that it is currently the cheapest way to get Sandy. 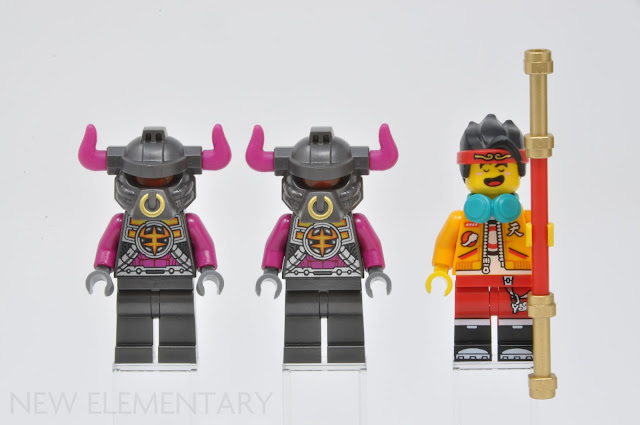 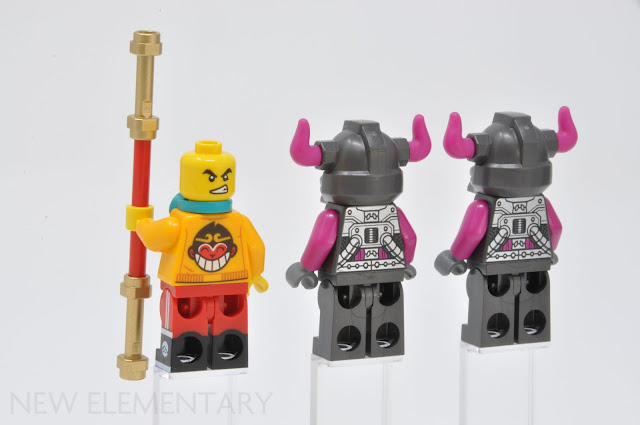 In fact, the minifigure selection in general is nicely balanced with two baddies and two goodies, one of which of course being the hero: Monkie Kid, who also gets an alternate face. The price is also reasonable, especially considering the inclusion of the expensive-to-produce bigfig.
As alluded to throughout the review however, this really is a playset first and foremost. While certainly not devoid of desirable qualities, I feel there isn’t a great deal the average AFOL would gain from this set - though the child in them would definitely get a kick out of it.

But what if an AFOL were to get a kick out of it? I said before, I was quite captivated by the barrel release mechanism and I was trying to figure out why. Then I realised it reminded me of the kind of fantastical vehicles you’d expect to see emerging from Thunderbird 2! I therefore decided to use the basic size, shape and mechanics of the Iron Bull Tank but reimagine it all as a vehicle of the International Rescue organisation. No photographs please, it's top secret! 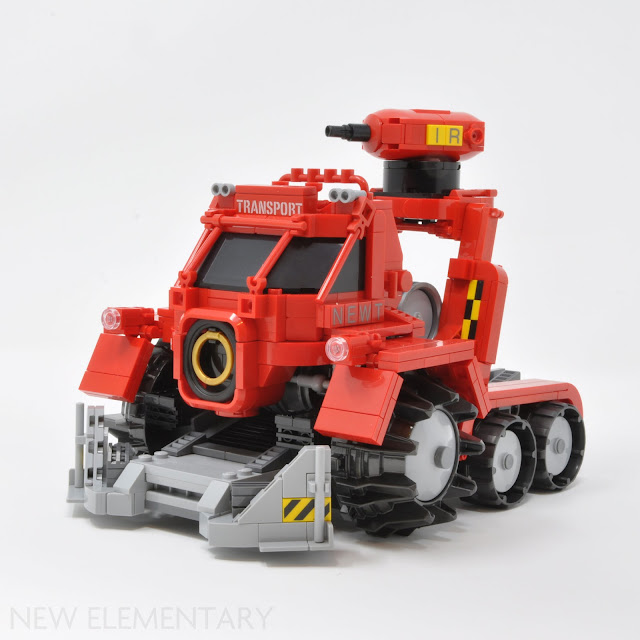 Introducing the N.E.W.T. (Neutralising Electrostatic Water Transport). This specialised firefighting vehicle is designed to push through flaming debris using its high-power water cannon and forward-mounted shield. Once in position at the heart of a blaze, the NEWT’s cab section elevates to dispatch its cargo of electrostatically sealed water barrels (definitely not made up) – capable of subduing even the most ferocious fires. 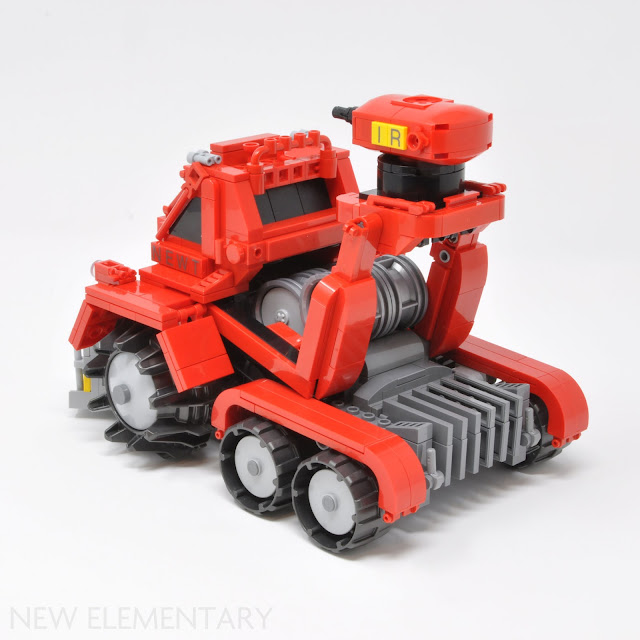 Overhauling the tank into something less mythical, if not more realistic,  was a fun challenge. Obviously, the red colour scheme instantly achieved a fresh appearance but things like adding mudguards over the wheels made a big difference too. I was keen to retain something of its former animalistic aesthetic though; namely the nose ring, now a highlight in the engine intake. Note that the windshield was also kept, albeit with some added brick-built outlining. I briefly considered retaining the horns as exhaust stacks but thought that would be a little too much. 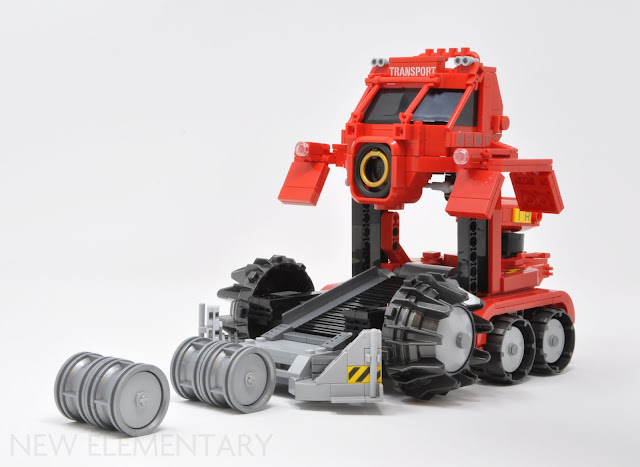 There are of course innumerable other changes made and details kept but since they’re all rather easy to spot, I won’t bore you with an exhaustive rundown. Instead, I’ll leave you with a shot of the NEWT in action - much more exciting! 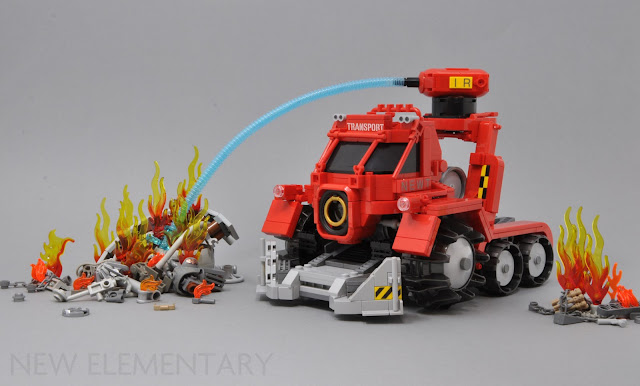 Having undertaken a rather drastic reimagining of the original, I now have to believe there must be ways to restyle similar play-centric sets. Perhaps there is something for AFOLs to enjoy in the Iron Bull Tank after all!

All text and images are © New Elementary unless otherwise attributed.
Admin: Tim Johnson Posted on 10/04/2020 05:54:00 am
Email ThisBlogThis!Share to TwitterShare to FacebookShare to Pinterest
Labels: MOC, Monkie Kid, Set review