Yesterday in part one, Ben Davies looked at the new pieces in 71374 LEGO® Nintendo Entertainment System and today in part 2, he reveals the interesting techniques he found in its build. The products in this article were provided for free by LEGO; the author's opinions are not biased by this. If you're buying this set, consider using our LEGO Shop at Home affiliate links: USA or UK. New Elementary earn from qualifying purchases. 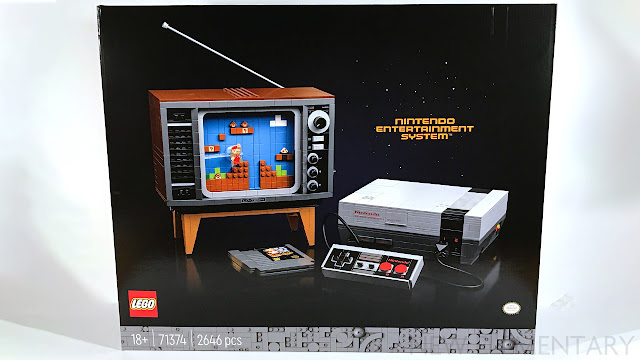 The box for the LEGO® Nintendo Entertainment System (NES) is appropriately massive, measuring 58 x 47.7 x 12.1 cm (22.8 x 18.8 x  4.8 in). Like other large sets, the first several bags of parts, as well as the bagged instructions and stickers, come in a white cardboard sub-box. 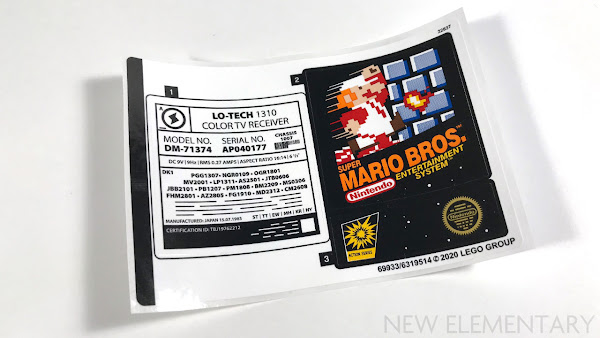 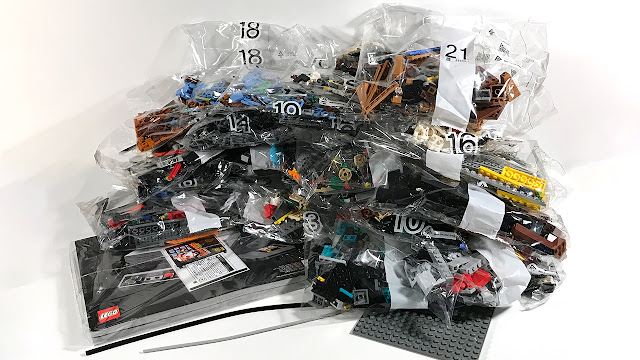 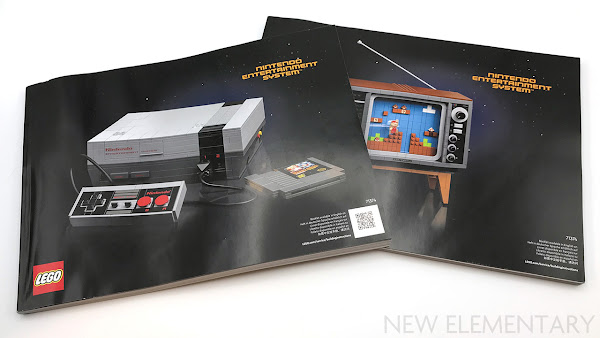 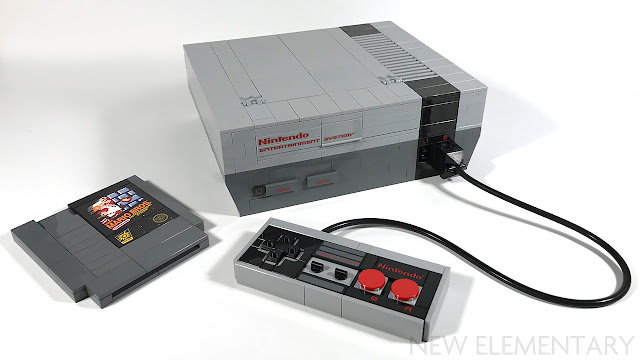 Despite initially appearing somewhat monolithic in appearance, the NES Control Deck is actually quite detailed when examined up-close, and has a similarly deceiving construction process chock-full of interesting, non-conventional building techniques. 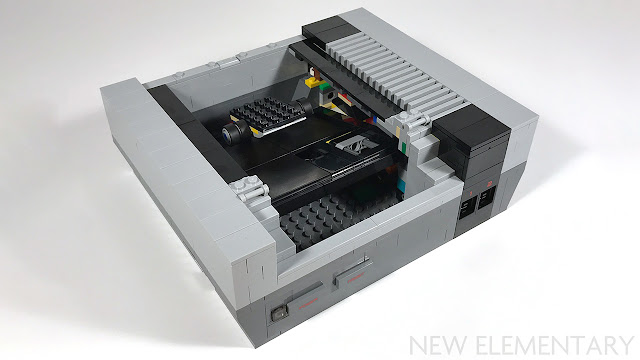 One of the most intriguing aspects of the LEGO NES is the fully functional Game Cartridge Tray which features a press-and-lock mechanism for inserting and removing the mock Game Pak with a satisfying click. 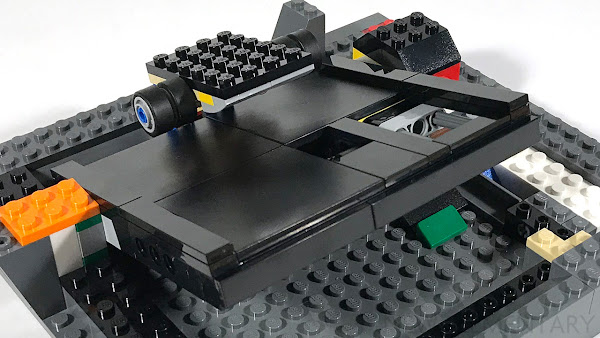 To achieve this, the tray is built on a Technic brick frame, and connected to the baseplate of the LEGO NES with two Technic Shock Absorbers (76138), which force the tray upwards. The back end of the tray is then locked into a lower position using two loose technic axles. 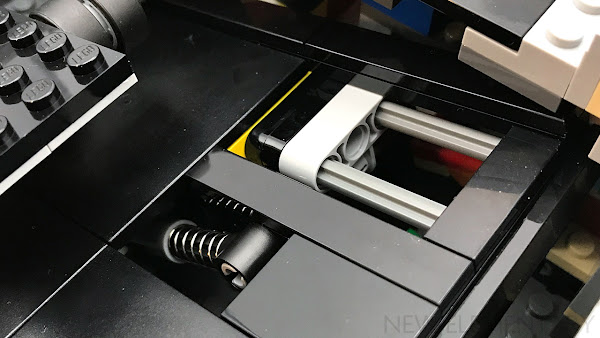 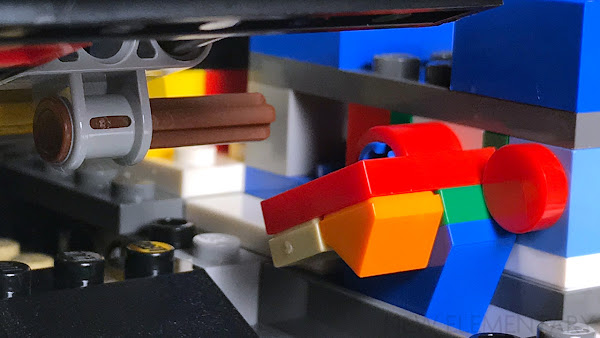 Together, these components form the basis of the press-and-lock mechanism. When the tray is pressed down, the slider slides down along the axle rails, and the exposed axle becomes caught on the underside of the catch latch assembly. Press down again, and the slider slides under and past the slope on the catch latch, falling back into the original position, and leaving the tray elevated on one end. 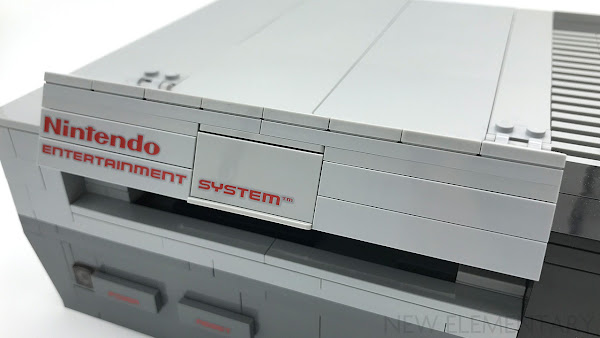 The commitment of the designers to capturing the little design nuances of the iconic NES console is seen throughout the set. This is perhaps most apparent in the incredible lengths they went to accurately reproduce the small extended lip along the Flip Top Door. 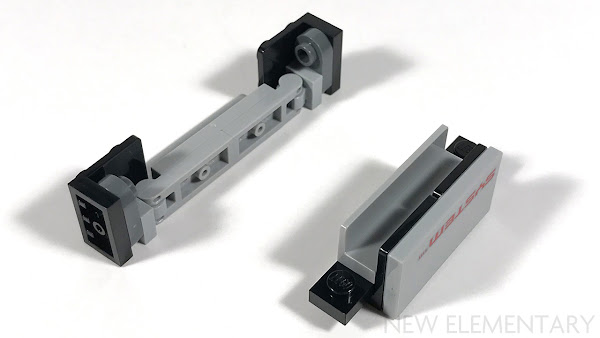 The portion of the door with the lip is built in two sections. The first section features a Panel 1 x 4 x 1 with Rounded Corners (15207), which is connected to two Plate Special 1 x 2 with Handle on End (60478). On either end, inverted brackets are attached to the handles via clips so that the exposed studs of the brackets are offset just above the ‘top’ tile face of the panel. 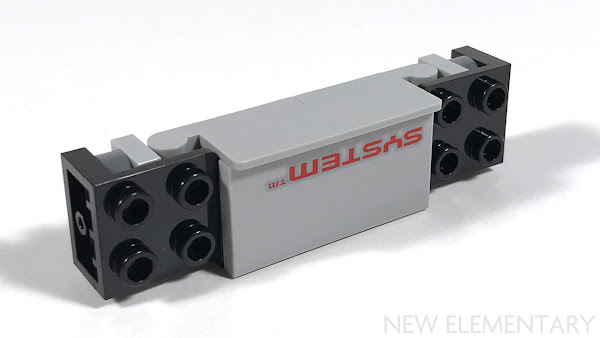 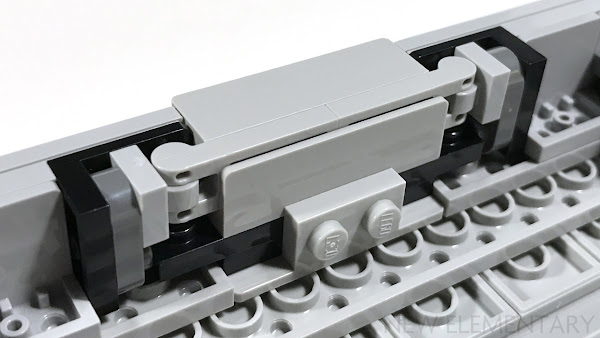 This is then placed into the larger door assembly, against the back of a 2 x 4 bracket. This bracket serves multiple purposes, helping to create a recessed surface for the lip assembly to fit, while also holding it in place. Lastly, the assembly is connected to the door using tiles connected to the exposed studs on the ‘front’ brackets. 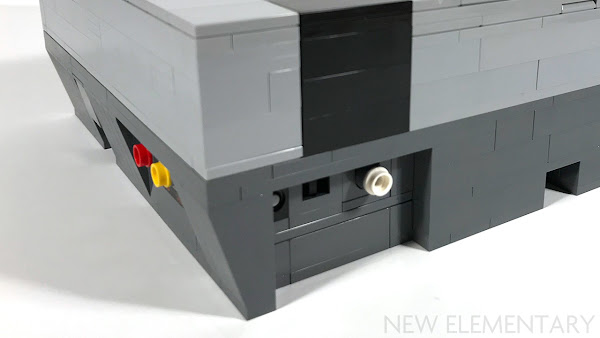 Variations on another interesting technique are used for the various ports exposed on the NES. Window 1 x 2 x 2 Castle (90195) form the basis of the ports, but requires placement upside-down to most accurately capture the original NES. 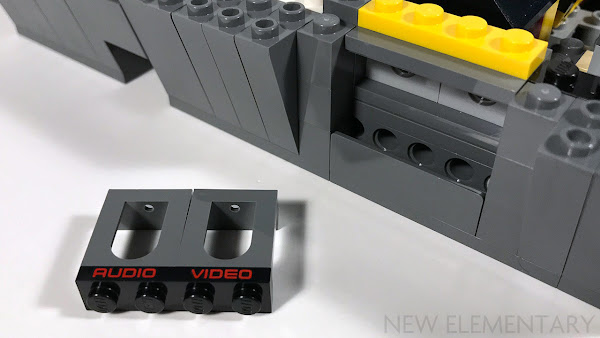 For the Audio and Video ports, a Panel 1 x 4 x 1 with Rounded Corners (15207) is used to create a gap in the structure, where an assembly of windows and a 1 x 4 plate is then inserted studs-down. In order to support the assembly, a 2 x 4 jumper is placed in such a way that it creates a shelf that catches the bottom lip of the windows. 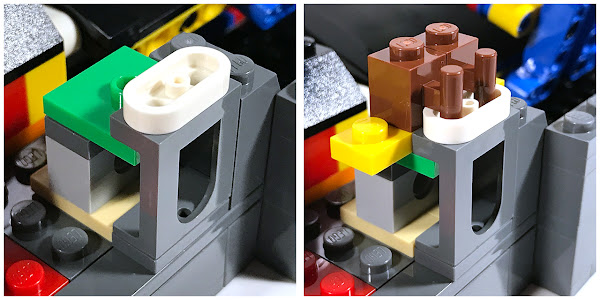 A similar assembly is used for the single large port on the back of the NES. The primary difference in this instance is, rather than using a panel to hide the studs, a 1 x 2 tile is attached to the studs of the window. To lock the window in place, a combination of 2 x 2 jumper, Plate Special 1 x 2 Round with 2 Open Studs (35480), and Brick Special 1 x 1 with Handle (2921) are used. 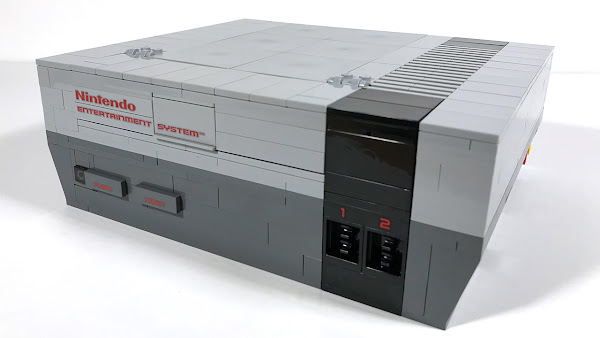 The remaining construction of the LEGO NES Control Deck is pretty straightforward, consisting mainly of tiling over the top of the console, though SNOT building is used for creating a vent. 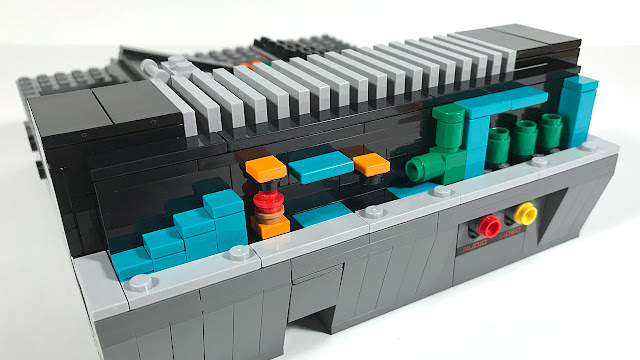 Unused space inside of the LEGO NES hides an Easter egg in the form of a microscale recreation of World 1-2 from Super Mario Bros. This can be exposed by removing a hidden panel. 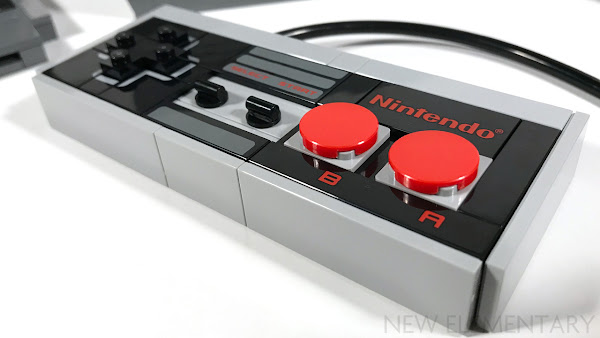 To go with the Control Deck, a recreation of the Super Mario Bros. Game Pak and NES controller are included. Although there are no mind-blowing techniques in the construction of either element, it is worth mentioning the use two Plate Round 1 x 1 with Open Stud and Bar on Underside in Black (6318701 | 25893) on the controller to simulate the Start and Select buttons.

With construction of the Control Deck complete, focus shifts towards the 1980s-style television set, which features a scrolling screen that displays a game of Super Mario Bros. being played when a crank on the side of the TV is turned. 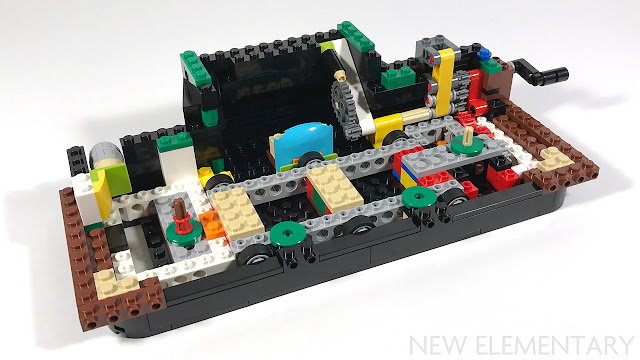 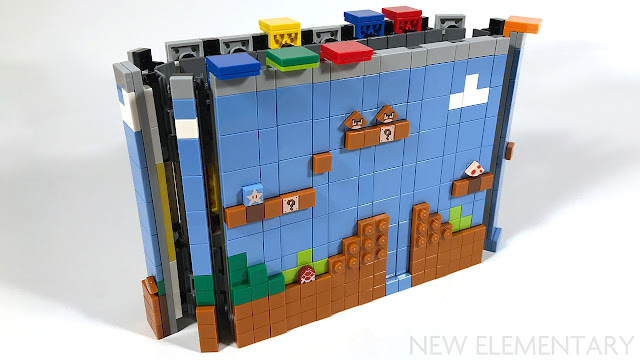 This axle connects to a removable Technic shelf assembly featuring four Technic Tread Sprocket Wheels (57520) for ‘scrolling’ the game level, which is built on two strips of Technic treads (88323). The actual level structure is built from a combination of plates and tiles, which are mounted to the treads using the all-new Plate 1 x 4 with 2 Bottom Pins (68382). At various points, coloured tiles are placed along the top of the flexible sections of level.

When the crank on the side of the television set is turned, the movement is transferred to the sprocket wheels of the Technic assembly, causing the treads (and connected components) to move, creating the illusion of an infinitely scrolling screen. A pixelated Mario tile is connected to a border of the television screen by a bar which swings up and down as a 3 x 3 dish placed below Mario collides with portions of the game level. 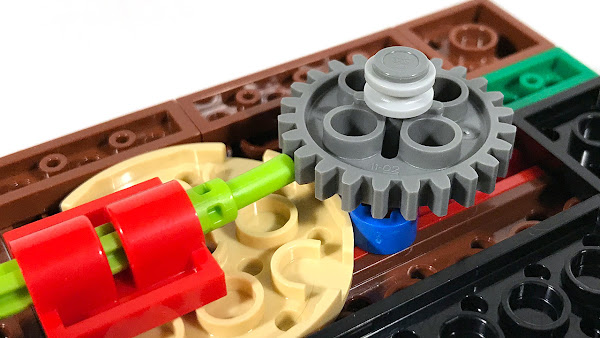 A small, but charming technique is used to create the dial on the television set, which only turns at 15 degree increments with a pleasant clicking sound. This mechanism is formed by a Technic Gear 24 Tooth (24505) and Hose Soft Axle 7 (32580), which are mounted behind the front panel of the television. When the exterior dial is turned, the teeth of the gear mesh with the end of the flexible hose, adding turning resistance and limiting rotation of the dial to 15 degree increments.

Compatibility with 71360 Adventures with Mario 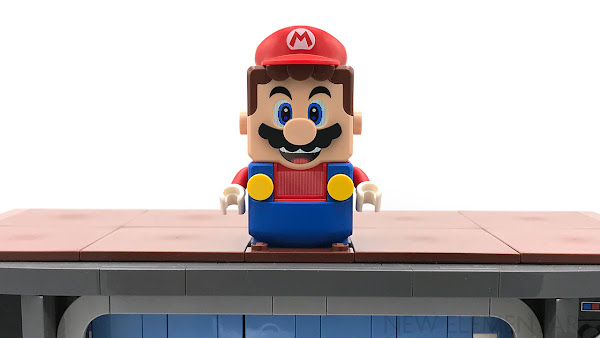 One last feature of the LEGO NES is only apparent when the set is combined with the LEGO Mario interactive figure from 71360 Adventures with Mario. 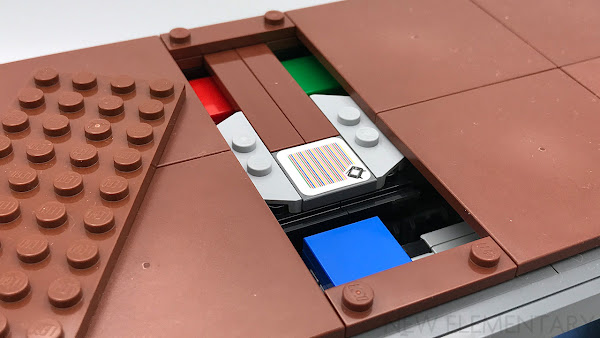 A panel on the top of the television can be removed to reveal an action brick which can be scanned by the LEGO Mario figure, and an opening that reveals the coloured tiles mounted to the top of the scrolling screen mechanism. 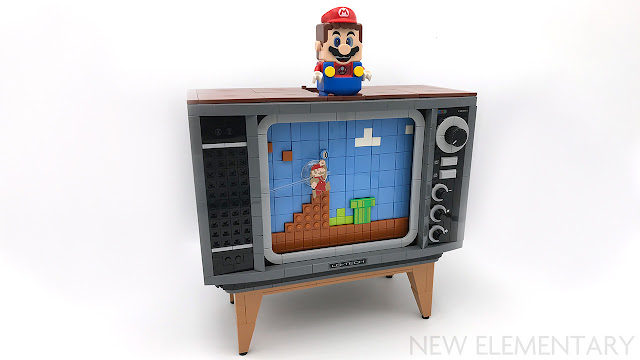 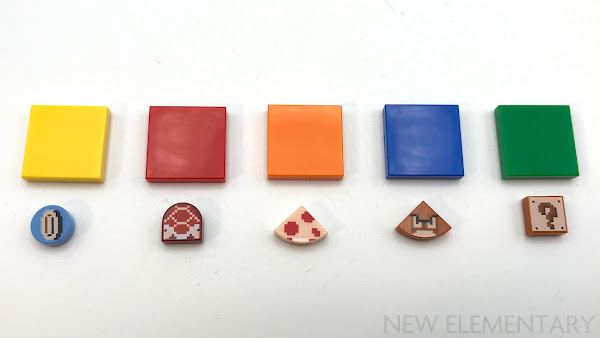 In reality, the sound effects are determined by the coloured tiles the figure senses below it, with different colours associated with different power-ups or enemies.

While admittedly an unusual subject matter for a LEGO product, 71374 Nintendo Entertainment System is an immensely rewarding set in all aspects and manages to stand out in a year full of exciting exclusives.

Building the set, while repetitive at points (particularly with construction of the scrolling screen), remains entertaining throughout. It provides an array of clever building techniques, Easter eggs, and plenty of “a-ha!” moments when elements come together.

Add the working game level on the television screen, and the set is elevated even further. Additional value comes through compatibility with the electronic LEGO Mario figure from 71360, which produces game music and sound effects in time with the moving screen.

At the end of the day, 71374 Nintendo Entertainment System is one of the most exciting sets in recent memory. This is one that you are likely to enjoy, even if you have no experience with the original NES platform. 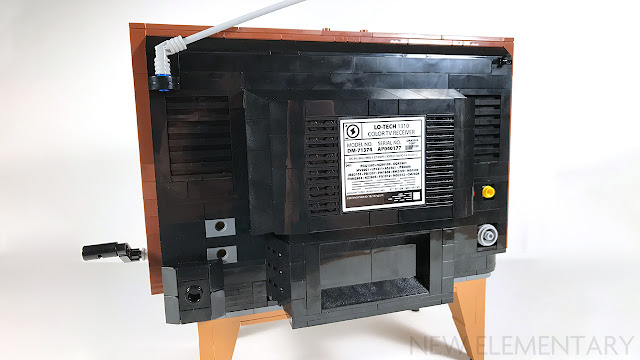 READ MORE: Our interview with the design & marketing leads on LEGO Super Mario reveals the thinking behind the range of sets

All text and images are © New Elementary unless otherwise attributed.
Posted by: Admin Posted on 10/14/2020 10:43:00 am
Email ThisBlogThis!Share to TwitterShare to FacebookShare to Pinterest
Labels: Set review, Super Mario