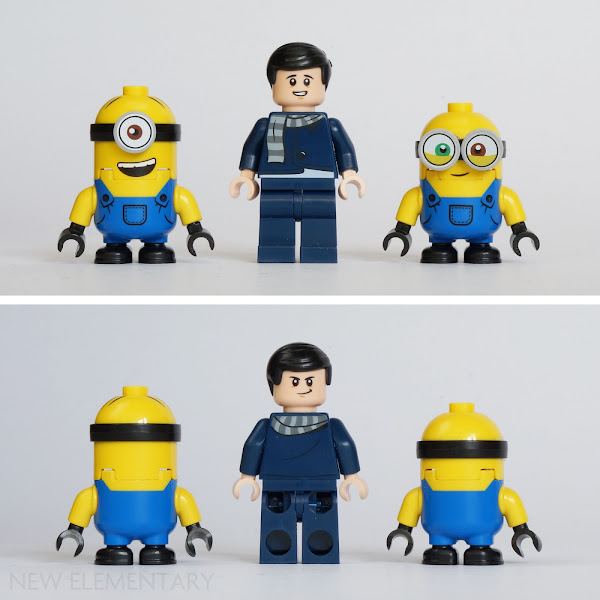 75549 comes with Stuart, Gru and Bob. Gru has 2 expressions and printing on the rear of his torso. The Minions come in their traditional overalls. 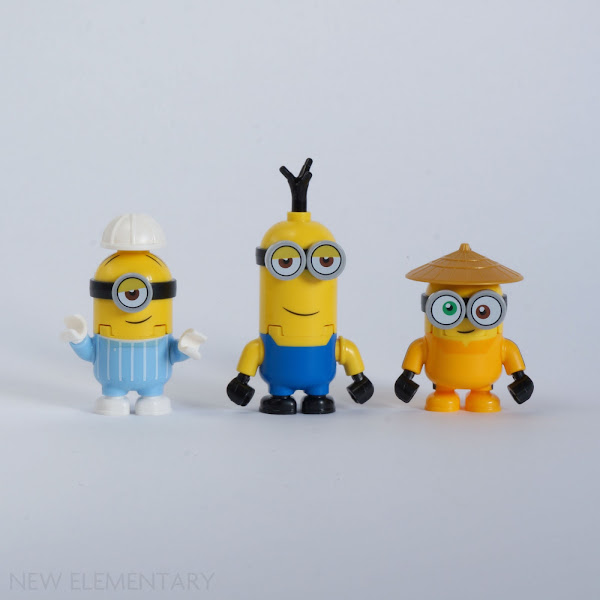 As for 75551, this set features Kevin in the traditional costume, while Stuart and Bob have different outfits: Light Royal Blue/ Bright Light Blue pyjamas and a Flame Yellowish Orange/ Bright Light Orange rubber suit with Black stripe, respectively. Note also that their eyes are different prints from 75549. The trio also come with incongruous headwear: a construction helmet, a conical Asian-style hat and there's also a fire helmet, not pictured. 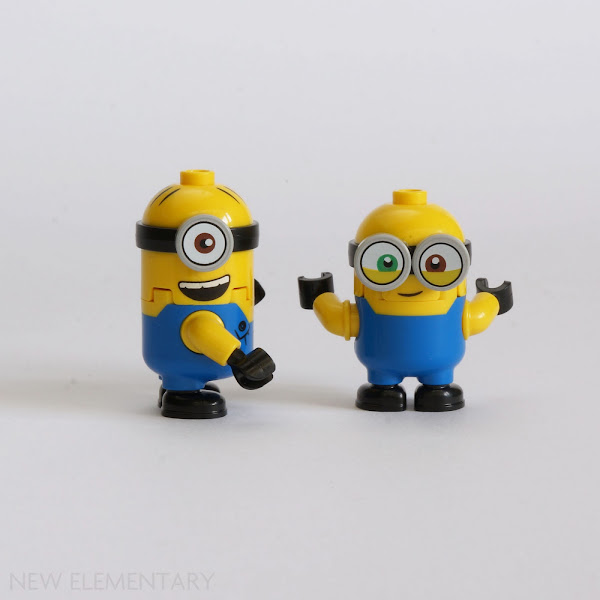 Given the Minions are composed of studded bricks, you can’t rotate their heads. This makes them less ‘poseable’ which seems counter-intuitive but perhaps might have been a deliberate decision so that the constituent elements match existing LEGO System designs more closely? However, 90° rotations are of course possible as shown above. 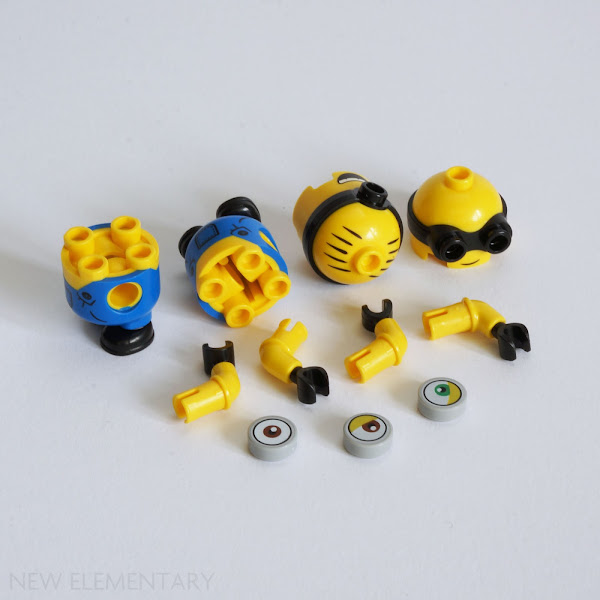 Pulling them to bits, you can see their bodies echo earlier LEGO elements like Star Wars droid bodies, but those would be challenging to use in a creation of your own. There’s more interest in their other constituent parts however, so let’s go through those now.

The 'minifigures' created for sets based on existing IPs frustrate many builders as the heads are so specialised but in the case of the Minions, the heads sit surprisingly well within the LEGO System. And you know what, you might even find a practical use for them. They are essentially 2x2 domed parts in Bright Yellow/ Yellow ranging in height, but with Black goggles that comprise of a headband with side-studs. 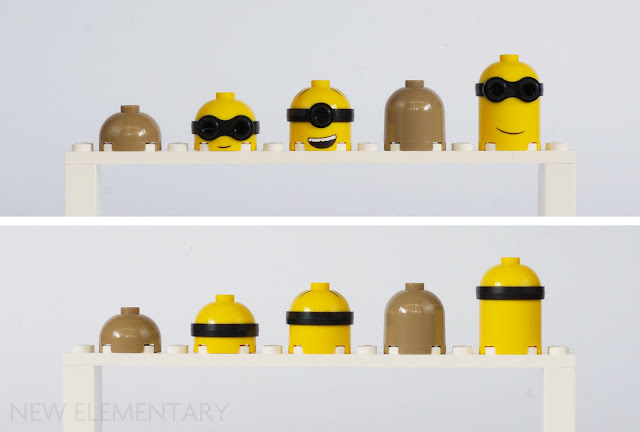 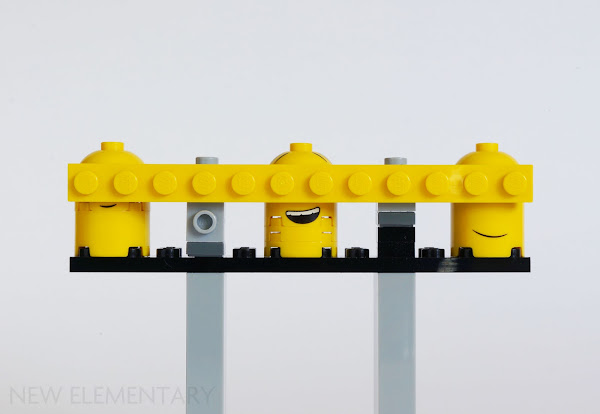 As the eye connections on the goggles are side studs, you could think of these new parts as ‘SNOT domes’. The level at which the eyes are positioned seems to be pretty much within the System grid, but I wasn’t quite sure. It felt like they were perhaps microscopically higher, and indeed in my picture above you can see the tiniest of gaps between the light grey bricks and the dark grey tiles below them. Perhaps this is just the regular tolerance though. It seems unlikely to affect your building, should you decide to employ the side-studs in a construction. 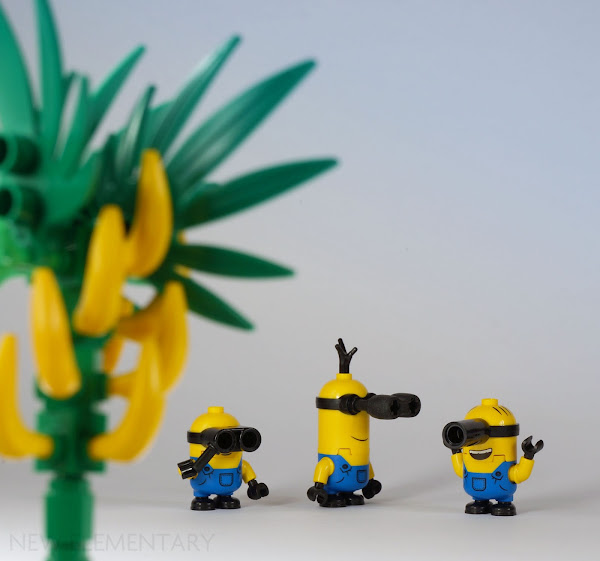 Those rounded eyes inspired me to locate similarly rounded LEGO elements, which became a fun exercise in creating Minion binoculars and... monoculars? 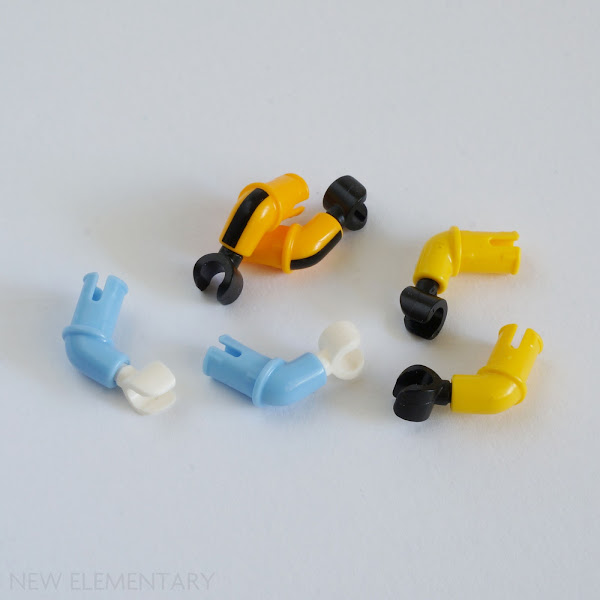 If arms like these, which seem to be becoming more common, strike you as being too specialised to use in your builds then perhaps reconsider them as being an angled connector with a Technic pin at one end and a clip at the other. The angle is around 110°.

Other notable parts in 75551 Brick-Built Minions and Their Lair 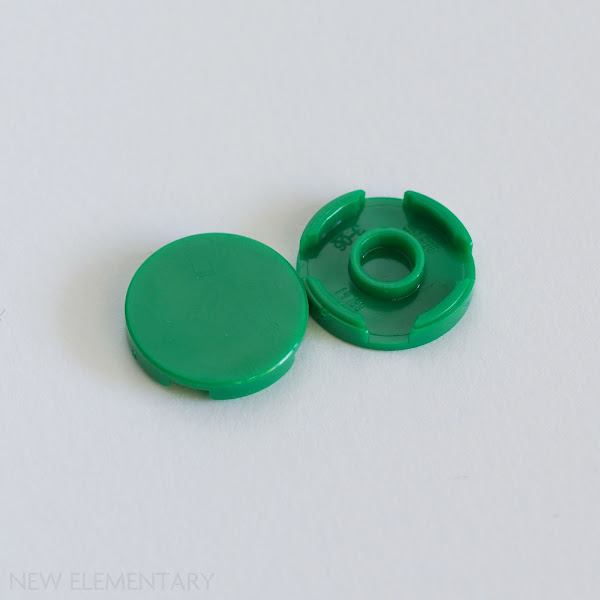 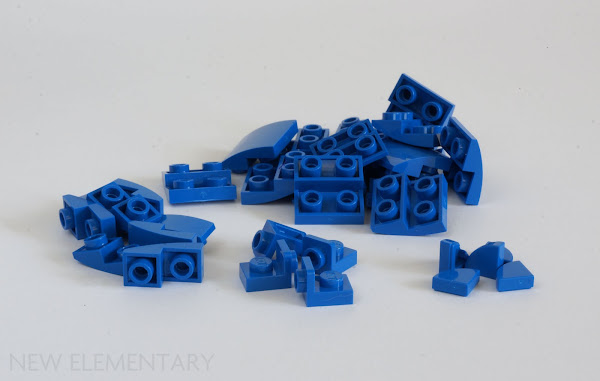 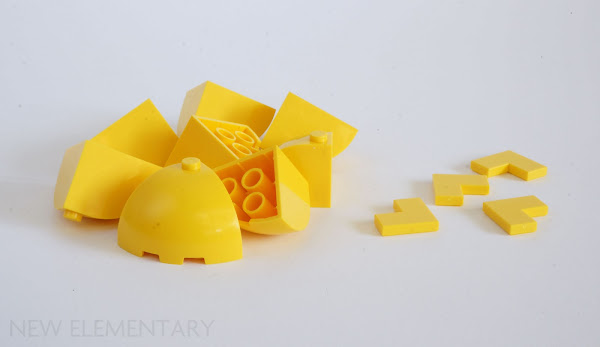 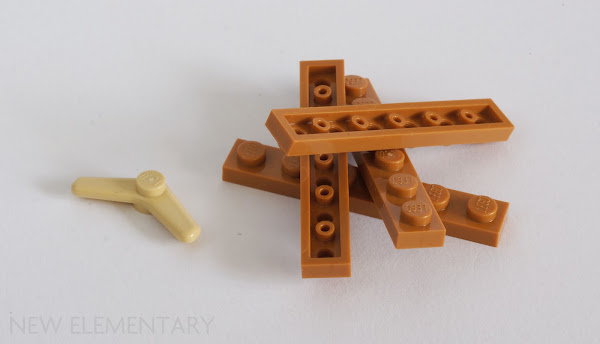 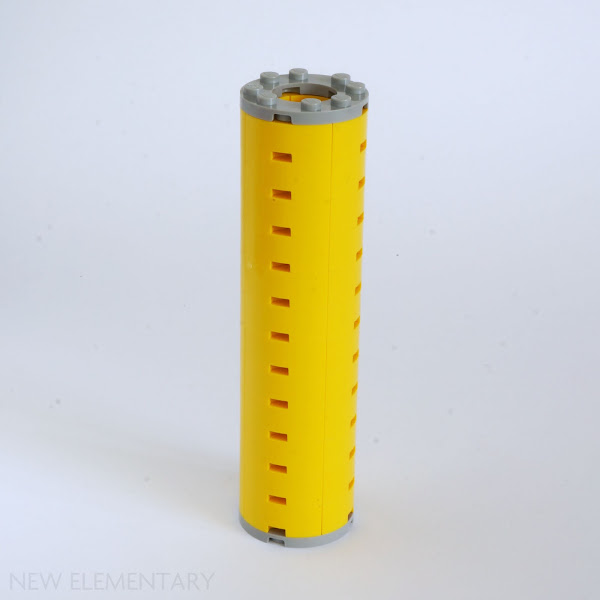 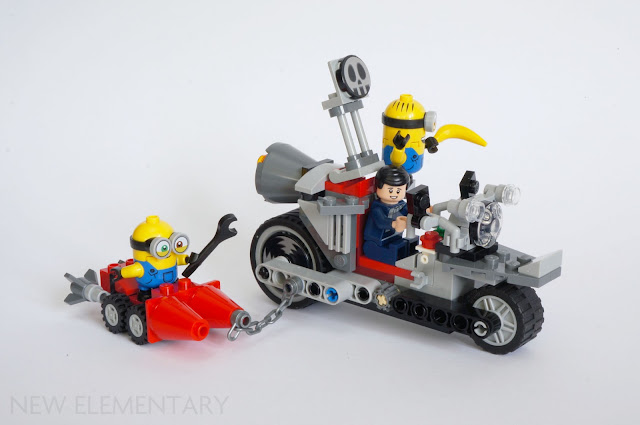 As mentioned earlier there is little of interest in this set for adults. It comprises a post-apocalyptic-esque bike plus a smaller vehicle that really looks like it should be able to propel itself... yet needs to be towed along by the bike? I’m sure the movie will explain everything in a logical and clear manner. 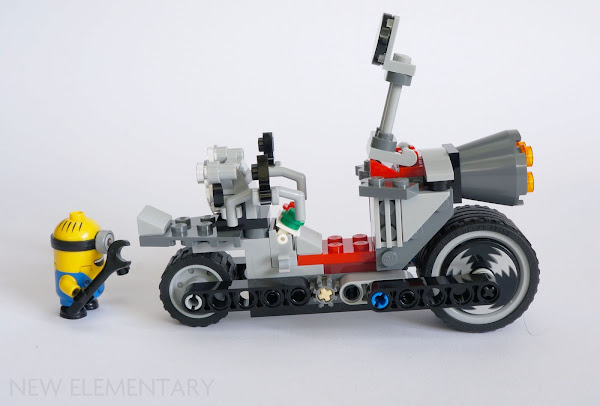 It’s a fun-looking bike with a nice profile, achieved with a minimum of elements – the entire set only has 136. 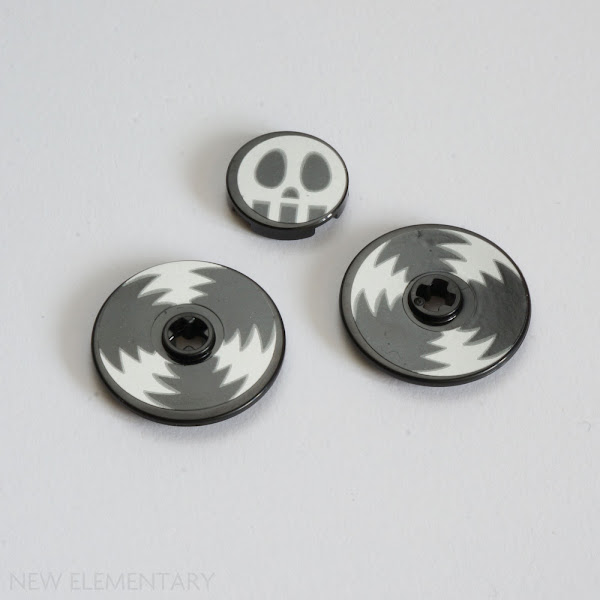 Atypically for me, I applied the stickers as they seem relatively useful and the parts are common enough. The skull face is cool; it makes me think of the artist Pete Fowler.

The completed set 75551 Brick-Built Minions and Their Lair

This set is much more fun, coming in at 876 elements and although it is a basic, relatively unremarkable build I found an innate satisfaction in building curved LEGO walls and topping the lot with quarter-domes. Despite the differences between the Minions' insides, it does get repetitive if you build all 3 yourself so this is definitely a good one to share with friends and family. 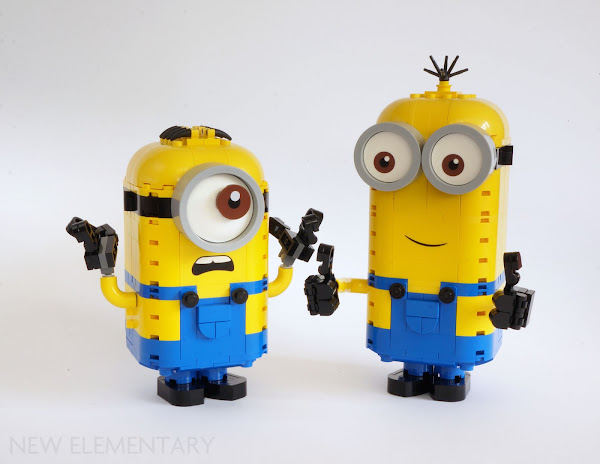 The completed Giant Kevin and Stuart are frankly delightful. The arms in particular are highly poseable, with rotation at the shoulder, wrist and fingers.

I am really impressed by the design of the feet. It can’t have been easy to engineer something sturdy enough to support the giant Minion that still looks true to the source material, and not only has the designer achieved that; they’ve also created a footprint that allows for wide rotation, providing more posing options. 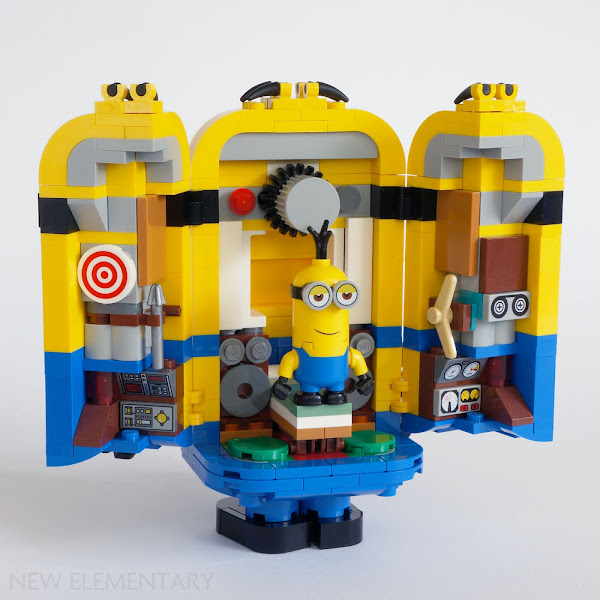 Their rear halves are huge doors you open to reveal all sorts of technical guffins inside. Admittedly this would be far more impressive had I applied the stickers. A little Technic work towards the end of the build creates the interior dial which rotates the Minions’ eyes; a superb play function. The lack of space dictates a lack of many other play functions, although there is a fold-down panel inside Stuart that the minifigure stands on. 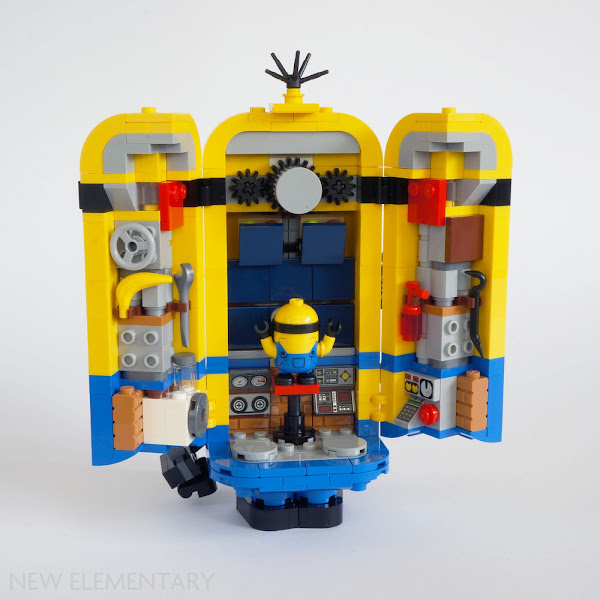 Naturally, Giant Kevin’s interior is the most spacious. It houses an impressive bank of monitors – or they would be impressive had I, again, applied the stickers, but I was lacking Dark Blue 2x2 tiles in my collection! 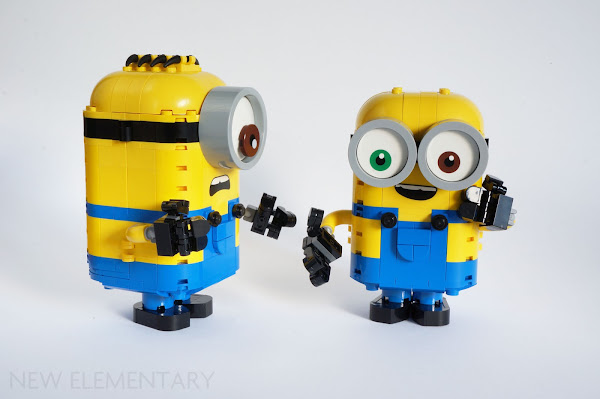 Striking a nice balance between playability and cost effectiveness, you can deconstruct Kevin and construct the much smaller Bob from his parts (much to Stuart’s amazement). I’ve read many comments online about people’s frustration that all 3 Minions cannot be built from just one copy of this set but I like the fact that it strongly encourages kids to rebuild their LEGO set. 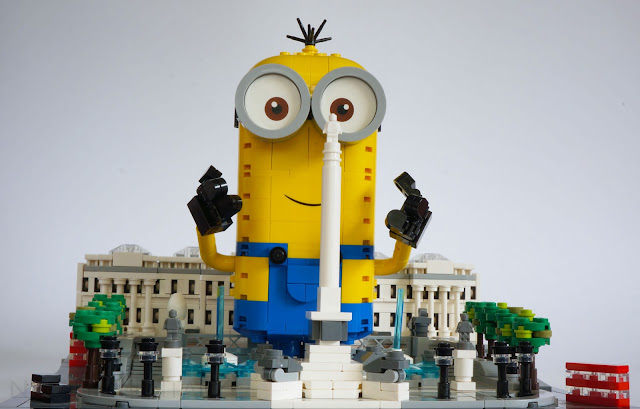 And if you own a copy of LEGO Architecture 21045 Trafalgar Square you can recreate the climactic scenes from the first Minions movie. Yes, I watched it. I was left with the thought that if you put a monkey in a room for an infinite amount of time with a typewriter and an awful lot of sugar, it would eventually produce the script for the Minions movie. Probably pretty quickly actually. I can confidently say I won’t be seeking out The Rise of Gru in cinemas next year, but its effects on LEGO System will be welcome in my parts collection forever.

READ MORE: Our detailed review of 71374 LEGO® Nintendo Entertainment System covers all the new parts and the fascinating techniques

All text and images are © New Elementary unless otherwise attributed.
Posted by: Admin Posted on 10/18/2020 06:36:00 am
Email ThisBlogThis!Share to TwitterShare to FacebookShare to Pinterest
Labels: Minifigures, Set review