We have a new contributor writing today; Omid (@nwbricks) who is a LEGO® City- and train-loving AFOL from the UK. His first assignment is an unusual one: the new storage boxes from IKEA®. The products in this article were provided for free by LEGO; the author's opinions are not biased by this.

History teaches us that very occasionally, when the stars align just right, some things are destined to be together. Romeo and Juliet. Mac and cheese. The Chuckle Brothers. These pairings are so utterly ingrained in mankind's collective psyche that to mention one without the other feels weird and incomplete; they are two halves of a greater whole, a plurality made singular.

But all that nonsense pales in comparison to 2020's new heavyweight power couple. Stand aside Kim and Kanye. Supreme x Louis Vuitton? Don't make me laugh. 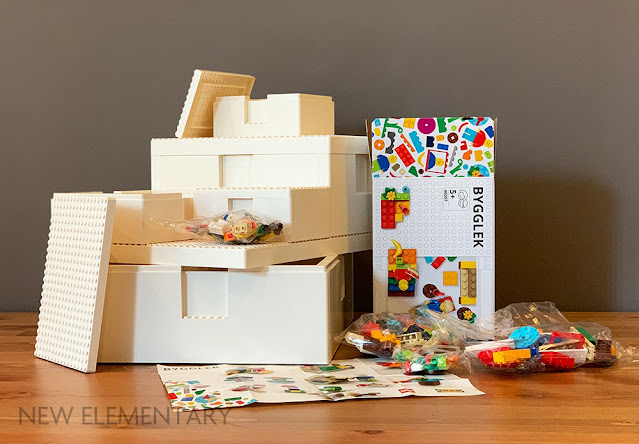 A Match Made in... Scandinavia?

As far back as anyone can remember, people have been measuring their LEGO train layouts in Linnmons and sizing up storage and displays based on their Kallax-ability (or Expedit-ableness, if you're old school). Half of my home layout is resting on top of £2 Burhult shelves, the building area is lit with various IKEA lamps and light strips, and even the wooden surface in these photos is a budget Jokkmokk dining table. In other words, LEGO and IKEA is not a new relationship.

So when I first heard about the new product line I was pretty excited, and while I wasn't sure quite what to expect I'm a sucker for clever storage solutions so had high hopes. I'd half expected some sort of plastic drawer and divider system given that's how the majority of AFOLs store their parts, but I guess that would be reinventing the wheel. 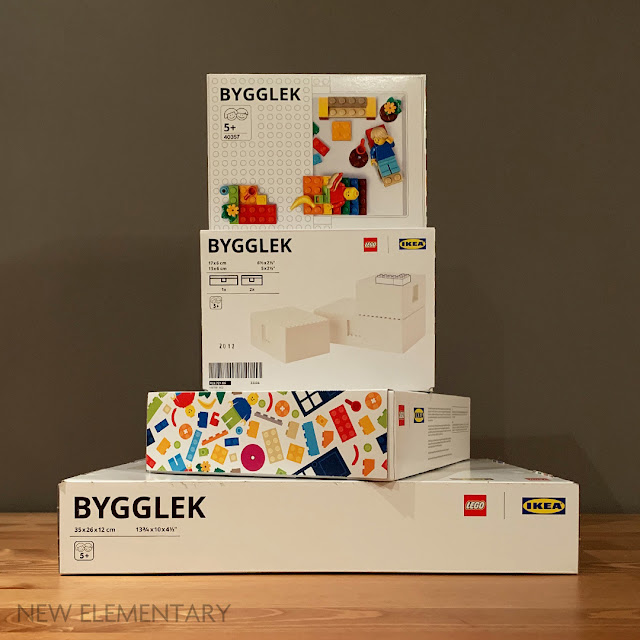 When the boxes were unveiled I was pleasantly surprised, and even more so when they turned up in the post. The packaging is really attractive and unlike some sets (not pointing any fingers) the tabs are glued fairly lightly in just two places meaning you can easily get it open in one piece with a sharp knife.

Aside from the range of boxes themselves, there's also the 40357 Bygglek box of bricks.

I won't spend time looking at the pieces as there's nothing particularly new or exciting, but I counted 201 plus the two "classic smile" minifigs. While there's no instructions to speak of — just a small Ideas Book-style page of mini builds — it's a decent little assortment of common elements. Having said that, a printed IKEA tile or torso would have been a nice touch.

Inside the other packages everything leans heavily toward the IKEA end of the spectrum. The larger boxes require some assembly, which is just a case of snapping the four walls together into the base. It's not quite a 942 piece pneumatic set with 32 steps but if you're anything like me you still might put the wrong sides in first, and while the tolerances aren't quite up to LEGO standards they lock together well and are extremely difficult to take apart once together.

I did wonder if we might get some thoughtful touches like LEGO-style instructions or even a minifig in place of the usual IKEA Man in the manual, but that's probably just me being a graphic design nerd. As it is, the manual is a fairly throwaway affair although there's a subtle hint at one of the major design flaws on the back page. 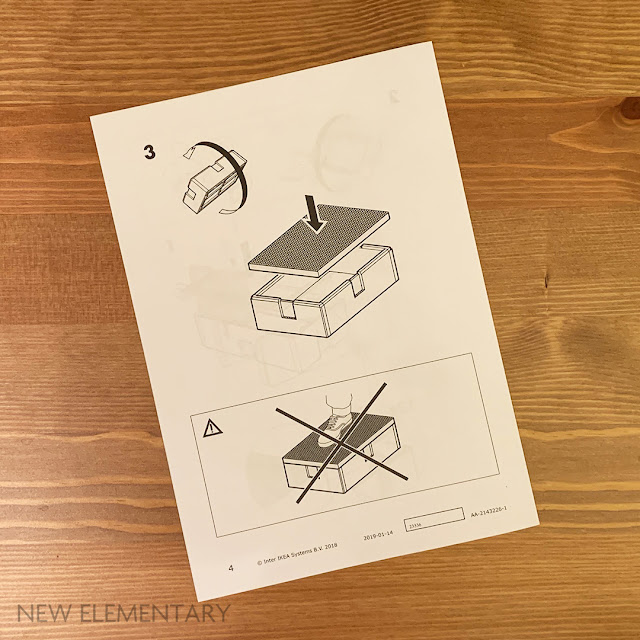 Once assembled it has to be said the boxes look great and they're clearly very well made. They use the same plastic as typical LEGO bricks although they do feel slightly different, presumably because we're not really used to such a large, flat surface area of shiny ABS.

Much has been made of Bygglek in the last few weeks and there have been some brilliant interpretations from the AFOL community, as you'd expect. We've seen palaces, planters and even Blacktron bases — all really clever ways of repurposing the boxes and capitalising on their playful side.

But the reason these things exist is for storage. New Elementary prides itself on finding creative and alternative uses for weird parts, but in this case it's more important that the product actually does what it's supposed to. And I really think they've missed a trick or two here.

The boxes come in four flavours: 44x32, 32x22, 22x16 and 16x11. All the internal walls are exactly 2 modules thick which is a nice bit of symmetry but unfortunately means that by the time you get to the smallest ones the internal area is a measly 7x12 modules with a height of four bricks. It would make a nice little trinket box but with all the will in the world, you won't get many more than about 20 2x4 bricks in there. 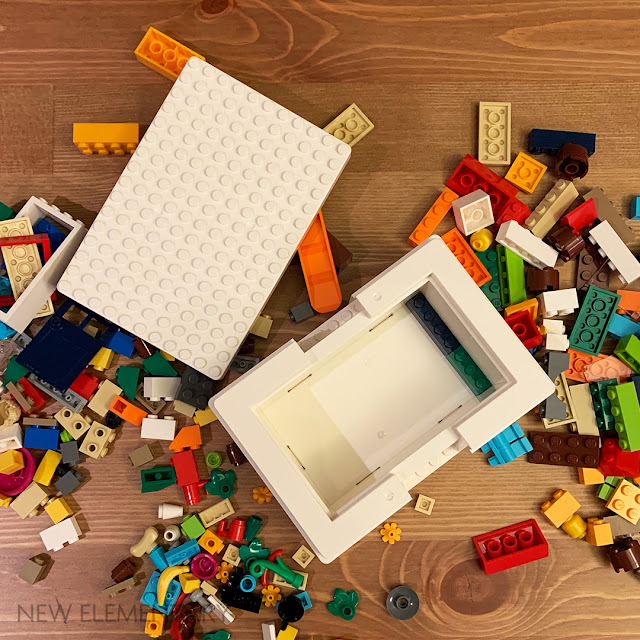 Why 44 was chosen as the length is a question for the ages. Bumping that up to 48 would have given nice, clean divisions that line up with existing LEGO baseplate offerings and also added a smidgen more space to the smallest boxes. Really though, this issue is kind of arbitrary. It's still a nice little box. No, the real problem with Bygglek is the kind of oversight that makes you wonder how on earth it got past concept stage: the lids don't lock.

As I'm writing this I'm still looking at them thinking surely not?! I keep half-convincing myself that I'll find some ingenious mechanism hidden in the lid that will restore my faith in the good names of our collective Scandi overlords but it's futile: they don't even try to lock by friction or otherwise. This is in stark contrast to basically every other container IKEA sells, for which you can buy any of approximately seven million different lid and base combinations, give or take.

Just feast your eyes on that lovely, homely display. So nice and tidy (well, mostly). I give it about ten minutes before a toddler tries to grab a box out of the cupboard, assumes incorrectly that those things on the side that look like handles are, in fact, handles, and tips the contents all over themself and the floor.

As a concept, Bygglek is great. Unofficial storage boxes with studded lids have been around for a while so it's nice to see them being produced officially. But as much as I hate to say it, the idea is poorly executed with function playing a very obvious second fiddle to form. If the recessed areas on each side had been omitted that would be a small saving grace but as it stands the shape naturally invites you to pick the box up at its weakest point.

At the end of the day, they're cute little boxes with nice geometries that line up with the LEGO System. The negatives take nothing away from the play side of the product: I can think of numerous uses for the lids, which are exactly one brick tall and would make great chunky baseplates for a variety of MOCs. In fact, LEGO historians will immediately recognise the satisfying similarity between the lids and the early baseplates from the 1950s and '60s. The boxes themselves, meanwhile, could make boats, truck chassis, houses, swimming pools…

But they're not marketed or purchased as LEGO parts, and if the goal was simply to create some chunky, odd-sized hollow boxes to be used alongside System bricks then there would be no need for the IKEA collaboration. There's nothing particularly wrong with them, but they are billed as storage solutions and they're not doing anything you couldn't achieve by gluing a baseplate to some Tupperware — and to be honest that would be an improvement because you could at least seal it shut. I rate them for play, but for storage you may as well just use the cardboard box they're sold in.

READ MORE: 71374 LEGO® Nintendo Entertainment System: the parts, all the cool techniques inside

All text and images are © New Elementary unless otherwise attributed.
Posted by: Admin Posted on 10/15/2020 06:40:00 am
Email ThisBlogThis!Share to TwitterShare to FacebookShare to Pinterest
Labels: Set review