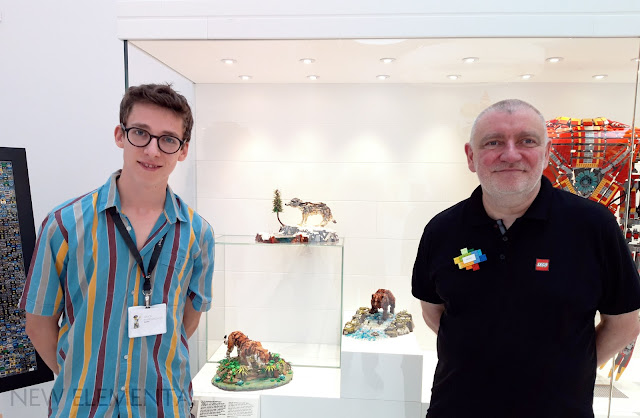 What are you looking for in the Masterpiece Gallery?

Stuart: It’s a mix, if you like. So we try to put together quite a diverse collection because we’re really trying to showcase the breadth of building styles, whether that’s different sorts of building techniques as well as different cultural aspects to the way that people are building. If you go to different shows around the world you will see quite a difference in terms of the cultural aspect to the designs. We actually have 13 different countries represented here from Taiwan to the USA, Russia, Croatia, Austria…

Ah, that would be you then, Simon! How did you decide which of your models to include, or did Stuart request some in particular?

Simon: I don’t think you asked for a specific one, Stuart, but I knew that my tiger is one of my most popular creations on Flickr. I agreed to rebuild it, because I always destroy my creations right after taking photos of them, in order to have the pieces to move on.

Then I just thought it would be nice to build more animals that fit together nicely. I chose to build three ‘loners’, and every one comes with a different kind of water. That is the idea of my exhibition.

So, joining the tiger, we have a bear and a wolf?

Simon: I actually built a wolf a few years ago at a larger size, and technically not very advanced, a basic style.

Did you use your previous version and just think how to build it smaller?

Simon: No, I didn’t even look at it. But I bought some Schleich animal figures that are very small, realistic-looking. Because you can look at photos on the internet, which I did do for the tiger, but it’s easier if you can hold it in your hands and see the more complex parts where different parts of the animal meet. That was very helpful for building. It’s really about breaking down a complex organic shape into these basic geometric forms that bricks have.

How do you approach using small and specialist parts, are they purely for details?

Simon: I didn’t  focus on the small details; it’s more about the overall proportions. The process was quite a challenge because I never immediately knew if the part really was the right one. Let’s say I do a micro model where every element represents a single detail: I know when I have found the perfect piece I’m happy with. But in this case I would oftentimes later return and see, no, this doesn’t work. It’s more like a pointillistic or impressionistic kind of approach - the idea of of many apparently meaningless parts coming together forming the overall imagery. Luckily it’s possible to adjust in retrospect – if there’s too much texture, or darkness, or colour… I would try to balance it by changing some elements.

Nevertheless there is some great parts usage here, like the green painters’ easels as lilypads and minifig hair for ears on the tiger model. And then the bear’s eyes - what are those?

Simon: The larger ball joints, the outer cup piece (Design ID 92013). These are the details I still try to incorporate just for fans and for fun so that you can also zoom in a little bit and enjoy the details. There’s also a stud shooter (15391) used as the nose for the bear.

Stuart: So does his nose fire?

Ha, we included that in Dark Blue in a workshop last year; people were really struggling but there were some clever ideas. Having it in grey would have helped!


Simon: With the tiger, probably one my favourite detail is a seashell under the jaw. It’s just a round plate in there to attach.


I see! It’s the whole part, opened up. What other things did you consider when creating this display?

Simon: One of the thoughts I had was to have three different kinds of water. So there’s this really dirty jungle water; still water. Then there’s this fresh, moving water and this cold, icy river. I tried to bring diversity also with the colour schemes; I did three different schemes without going into a different style of colour usage, so it is all in the same more subtle muted colour scheme but trying to find different feelings –  a more warm feel, then to give a very cold impression.

Stuart, what were your thoughts around placing Simon’s pieces with the other works in this case?

Stuart: Creating diversity. You have this highly detailed style and then this big ‘drama’ piece here. Everyone is drawn to that which is why we’re trying to make it as diverse as possible. Mixing it up so that you’re seeing a lot of difference between the exhibitors.

Simon: I’m next to the biggest eye-catcher!

I notice that another cabinet has two models of rock bands built at a similar scale but the builders are from Finland and Taiwan! And had no idea what the other was doing.

Is it up to you, Stuart, to choose which AFOLs are going in which cabinets?

Stuart: Yes, and so far we haven’t arranged them by geography; we’ve tried to spread them out. It’s more about balancing the work. Within the space the we allocate to the AFOL it’s a case of working with them to set the layout. We’ll say what the footprint is going to be. Some of them will take a photograph, they’ll try to do a dry-run setup at home; that way we have a better idea of the layouts.

How do you choose which AFOLs will feature in LEGO House?

Stuart: Every September we bring new fan content in, and we source the collection for Masterpiece Gallery via the LEGO Ambassador Network. We reach out to the LUG Ambassadors and ask them to make nominations. If you’re interested, approach your Ambassador to let them know that you’re interested and they’ll consider you in their nominations. From that we get 250 or so names… and then have a lot of Flickr sites to go through! A lot of fantastic work – it’s a really challenging but a fun thing that I have to do every year to put the collection together.

Then of course I go around to a lot of fan exhibitions and might see something that might be perfect in LEGO House. This year I have been to five myself: a couple in the USA, one in Shanghai, one in Italy and then of course we have the Danish one. We try to do different shows each year, spread them out. I will approach the fan directly and ask if they’re interested. Very often they are! Which is really great. We will get their piece as something in one of the wall cases, or here in the Masterpiece Gallery.

As Simon said, you didn't ask for specific works from him but are there also situations when you do ask a chosen AFOL for a particular piece?

Stuart: It’s a mix. With some people we’ll say “we really love this, what do you think, is there anything else you would suggest?” It becomes a bit of a negotiation. Very often, because we’ve seen their website, then we’ve seen their big collection of work. From that we’ve seen some pieces which we really really liked and we’ll reference those, but they might have pieces that they haven’t published or some piece we have seen has now been ‘recycled’ into some other MOC! So it’s a mix of ‘classic’ ones from them, if you like, and sometimes they’ll do a ‘custom’, a new piece. It’s really nice to get that mix.

And if people want to display elsewhere in LEGO House, how does that work?

Stuart: We have wall cases in the different Zones where we run competitions around a particular theme. So for example the yellow case is all about nature and the competition on LEGO Ideas was alternative nature builds. In the green case, we have minifigure vignettes. Anybody can submit a model for these competitions and from the few hundred that we get we whittle it down to a collection that we put in the wall case.

Thanks, Stuart, for delivering a really spectacular collection this year... and congratulations on the amazing display Simon!

READ MORE: Watch a video of all the new additions to the Masterpiece Gallery by Caz Mockett, one of the chosen artists

All text and images are © New Elementary unless otherwise attributed.
Posted by: Admin Posted on 10/22/2019 03:30:00 am
Email ThisBlogThis!Share to TwitterShare to FacebookShare to Pinterest
Labels: CCBS, Community, Event, Inside LEGO, Interview