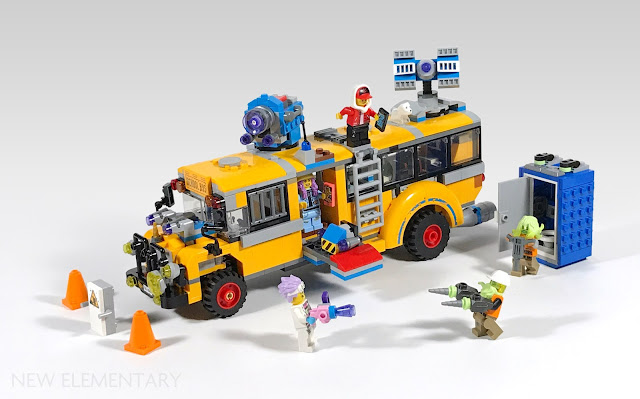 For all the different LEGO® buses produced over the years, there’s been surprisingly few depictions of school buses. Historically, LEGO has instead opted to reproduce public transport and tour buses. With the launch of LEGO Hidden Side 70423 Paranormal Intercept Bus 3000, they have finally rectified the situation. The Paranormal Intercept Bus 3000 is modeled off of a typical American school bus, retrofitted with various gizmos and gadgets to help heroes Jack, Parker, and J.B. defeat the ghosts of the Hidden Side.

Surprisingly, only one new Flame Yellowish Orange/ Bright Light Orange element has been introduced specifically for the Paranormal Intercept Bus 3000: the 5x5 Corner Rounded Brick (6267423 | 24599) is currently exclusive to this set. Four are included, though they are unfortunately covered with stickers during the building process. Also notable in Flame Yellowish Orange is the 1x2 Gold Ingot (6236454 | 99563), which makes its second appearance here after being introduced in 2018’s 21311 Voltron.

The set includes four new decorated elements, which have been introduced specially for the Hidden Side theme. 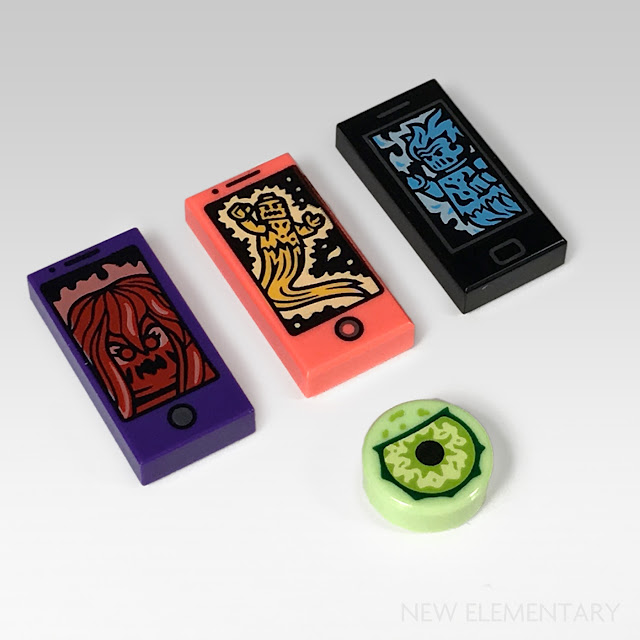 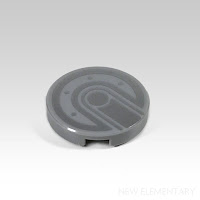 The Paranormal Intercept Bus 3000 comes with five minifigures, though only two are exclusive to the set. The first three figures are Jack, Parker, and J.B., who appear across the Hidden Side set line. 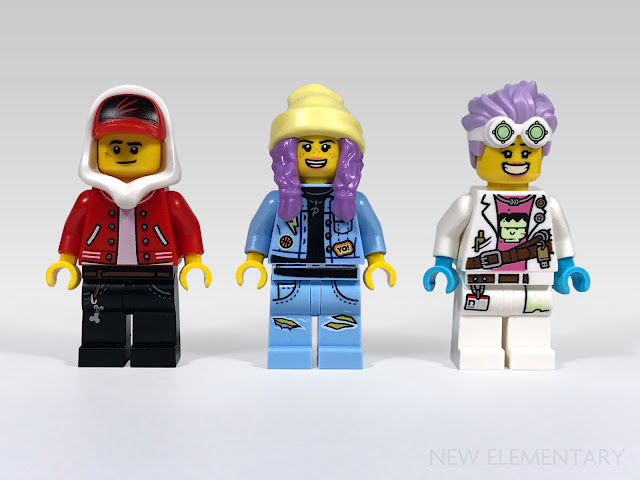 The remaining two figures are a male and female construction worker. 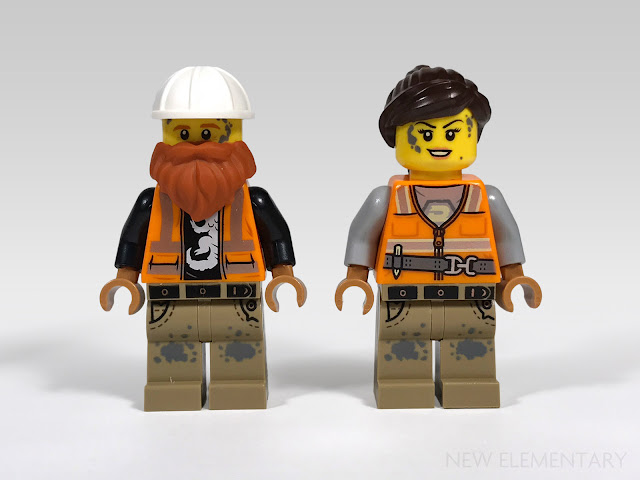 The torso and legs for both these minifigures are exclusive, with one featuring a nice reference to Blacktron in the form of a faded shirt below the orange vest. 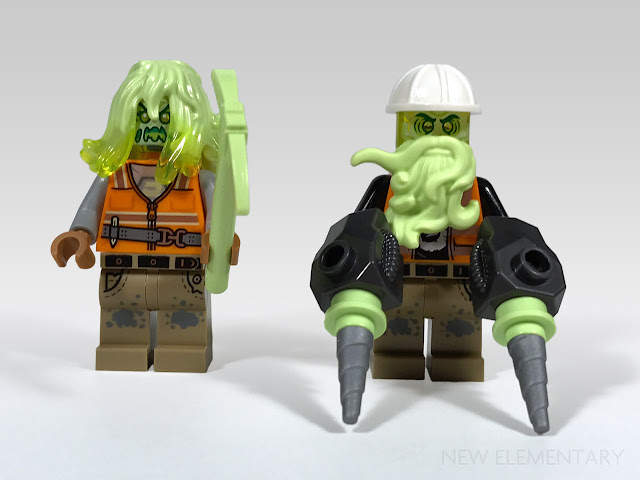 Both construction workers feature alternate heads and accessories to represent gloom possession. The female worker features a new wig element (6275120 | 53801) which is moulded in a combination of Spring Yellowish Green and Transparent Fluorescent Green/ Trans-Neon Green, while the male worker features a new Spring Yellowish Green beard element (6273231 | 53821). Both of these elements appear across the Hidden Side range.

The first bag is used for building various construction equipment, a portable toilet, and the removable interior of the bus. 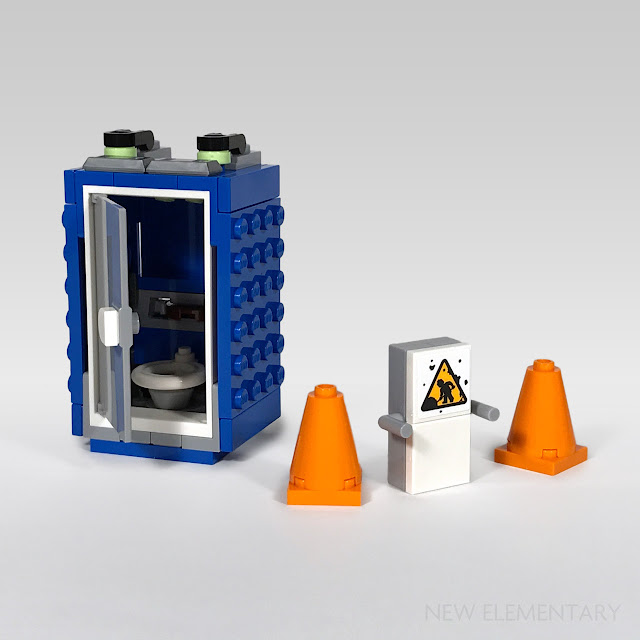 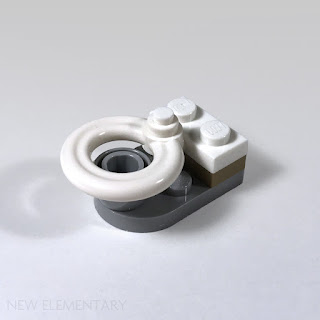 Inside the portable toilet, the first truly interesting technique is found. The body of the toilet is cleverly created by combining a 2x2 coupling plate with an unprinted Medium Stone Grey mini hat element (6200065 | 35012), introduced earlier this year in set 75973 and featured in our recent Parts Festival. A floatation ring/ life preserver/ lifebuoy with knob is then attached to a 1x2 plate with vertical shaft to create the toilet seat.

While LEGO toilets have been constructed using a variety of methods over the years, this is certainly one of the more simple and clever techniques I’ve seen.

But not all is as it seems... the construction equipment and toilet can be combined to create a haunted living port-a-potty. (Though it’s still less scary than most real-world ones!) 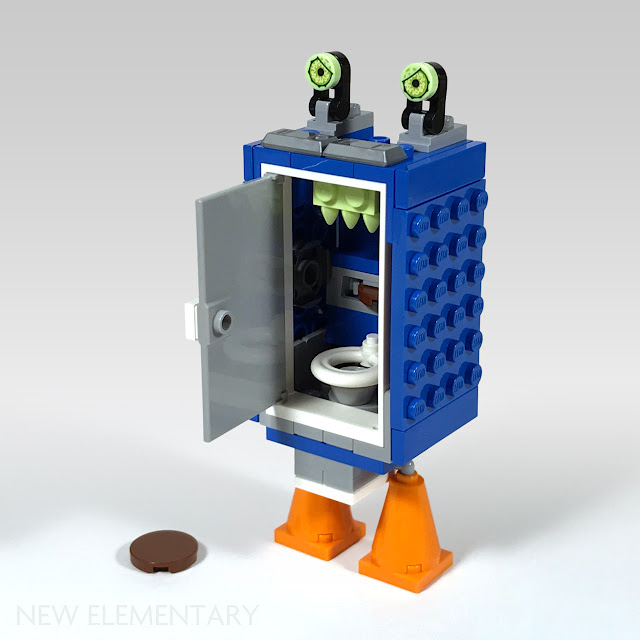 The removable interior of the bus features a number of fun and interesting details. 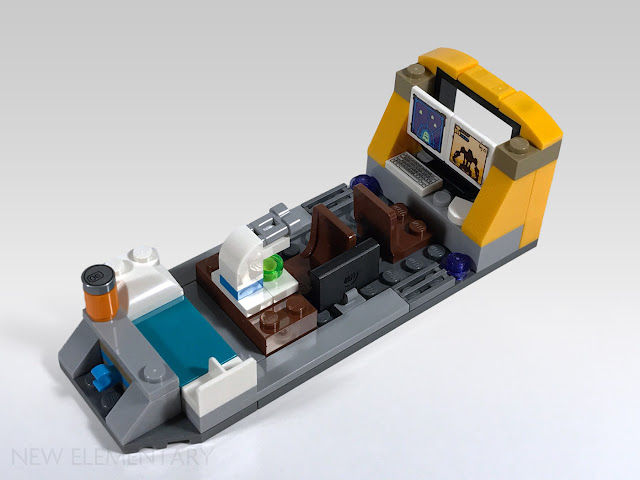 At the far end, a computer station features dual monitors with a keyboard and mouse. (In a fun Easter egg, one of the stickers for the monitors features a rendition of a screen from the unreleased 2001 Bionicle: The Legend of Mata Nui video game.) In the middle of the bus, a mobile lab can be found with a microscope and laptop. Lastly, a bed is included for minifigures to rest in-between sessions of ghost-fighting. A reference to 1999’s Rock Raiders is also present through a bumper-sticker on the back. 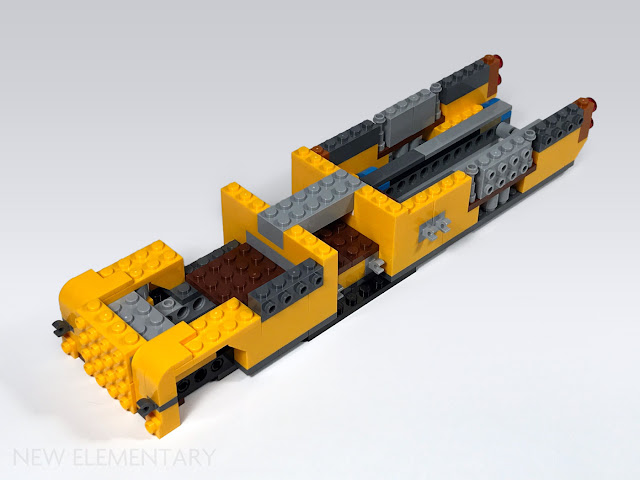 In the second bag of the set, focus shifts to the Paranormal Intercept Bus 3000, which is the central focus of the set. A few steps into this section, the large scale of the bus becomes apparent. Whereas most LEGO vehicles have alternated between four and six studs wide, the core of the bus here is eight studs wide. At various points, the exterior detailing even brings the bus to as many as ten studs wide! 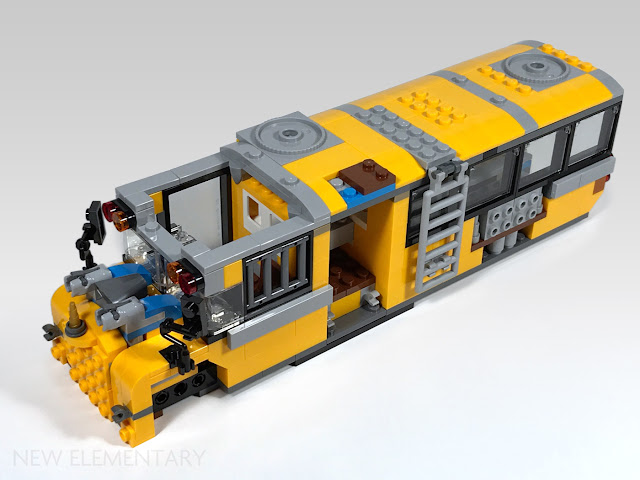 The third bag of the set completes the basic body of the bus by adding windows, doors, and roofing to the back of the bus. Certain details are also added, such as stud shooters and an engine at the front of the bus, a ladder to the roof, and mirrors which are created by attaching paint rollers to 1x2 plates with vertical grips. 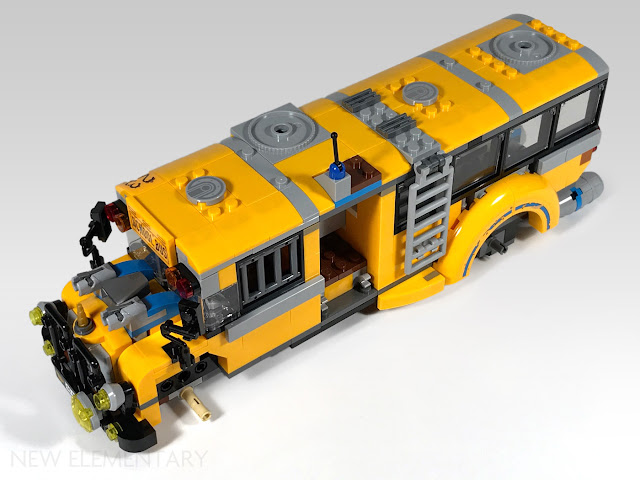 Using the fourth bag, the remaining front section of roof is constructed, and the focus turns to detailing. 5x5 rounded corner bricks are used to complete the back wheel well, while two exhaust pipes are constructed using macaroni tubes and the recently-resurrected Medium Stone Grey barrel (6278993 | 26170). 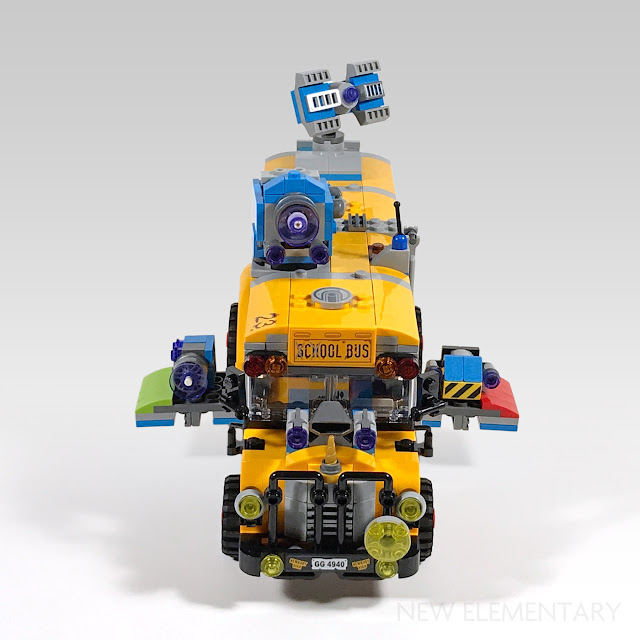 Grills, front bumper, and headlights are added to the front of the bus. To create the headlights, Niek has used another unprinted Medium Stone Grey mini hat element. 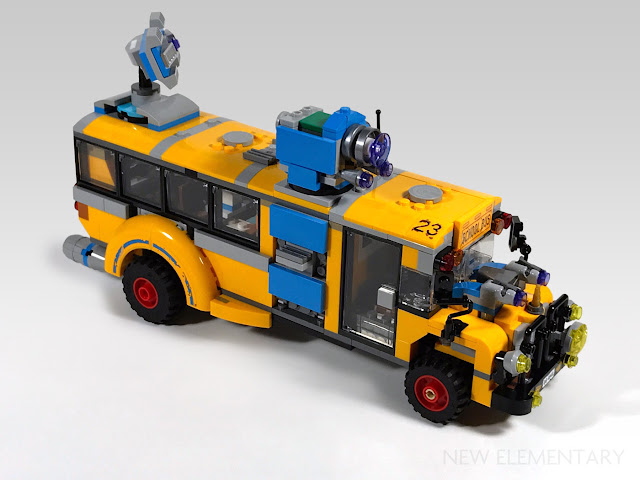 The fifth and final bag of parts is used for completing the exterior detailing of the bus. Two opening hatches are constructed around the holes in the sides of the bus, each featuring ghost-fighting gadgetry and color swatches which can be used in the app. 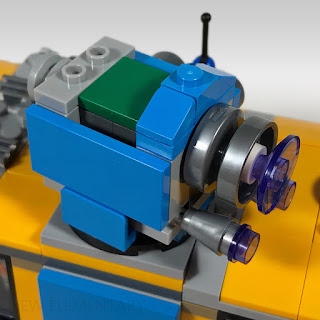 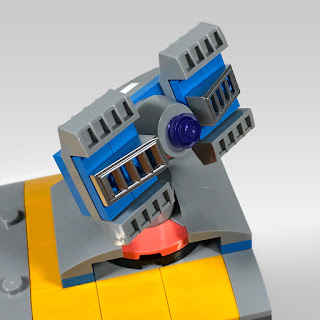 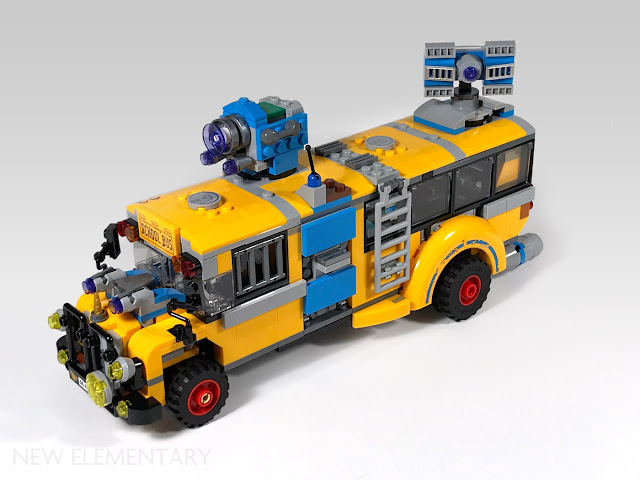 Two different kinds of tires are used at the front and back of the bus, in order to keep with the retrofitted look of the model.

After building the Paranormal Intercept Bus 3000, I am confident in saying that it is one of the most creatively interesting sets of the Hidden Side line. The unusual choice of subject matter helps it to stand out from previous LEGO sets, though at the same time it could easily be modified to fit into a post-apocalyptic or City layout.

On the subject of parts, what the set lacks in new or exclusive elements, it makes up for in the quantity and diversity of the parts it does have. It features a wide variety of parts in Dark Azure (almost 20 types), Flame Yellowish Orange (almost 30 types), and Medium Stone Grey (over 65 types). For these reasons, I could easily see this becoming a popular parts pack. 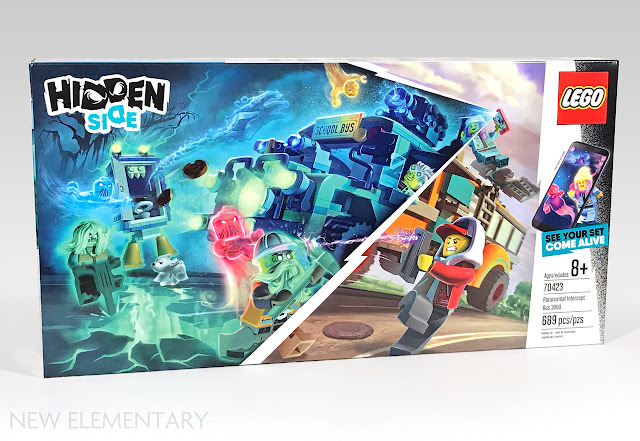 READ MORE: Weird bug legs from 1998 analysed by Duncan Lindbo for our Old Elementary series, with some really cool builds!

Products mentioned in this post were kindly supplied by the LEGO Group. All content represents the opinions of New Elementary authors and not the LEGO Group. All text and images are © New Elementary unless otherwise attributed.
Posted by: Admin Posted on 10/04/2019 03:30:00 am
Email ThisBlogThis!Share to TwitterShare to FacebookShare to Pinterest
Labels: Hidden Side, Set review