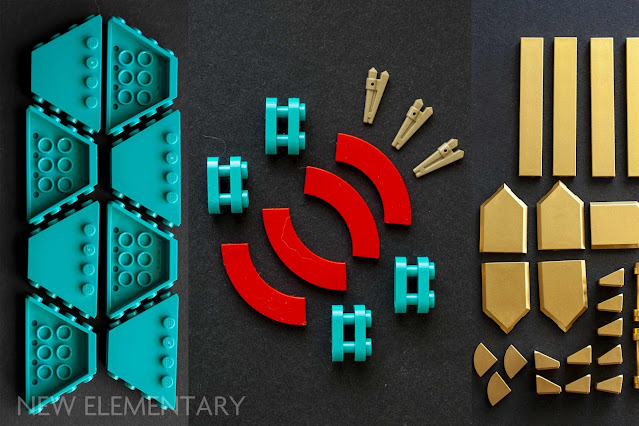 The printed legs and dual-molded helmets are unique to this set. The torso print also appears on 80032 Chang'e Moon Cake Factory. 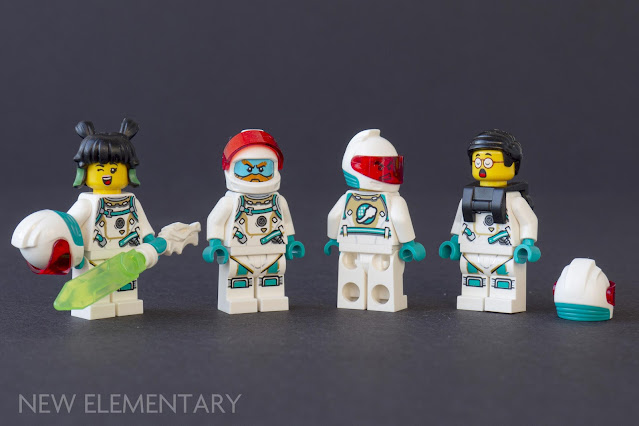 Sandy's minifig scale version with the head print and the recoloured orange mohawk are new for this wave. They appear also in 80033 Evil Macaque's Mech. The beard has only appeared before in CMF Viking in 2020, making it a welcome return. 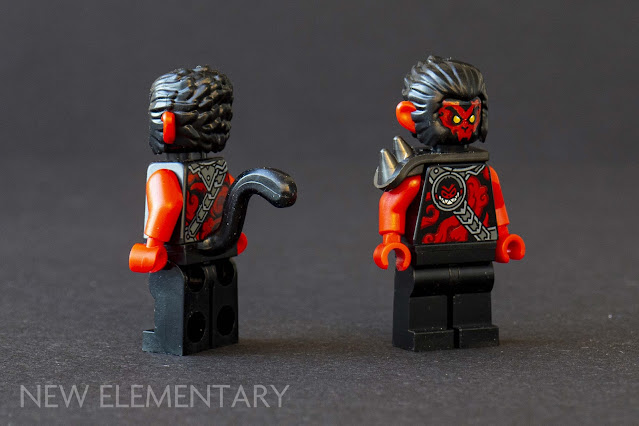 The monkeys are identical except for the pauldron, and their new parts are also available in 3 other sets of 2022 January wave. The black tail makes a return from the CMF cat costume girl from 2018. 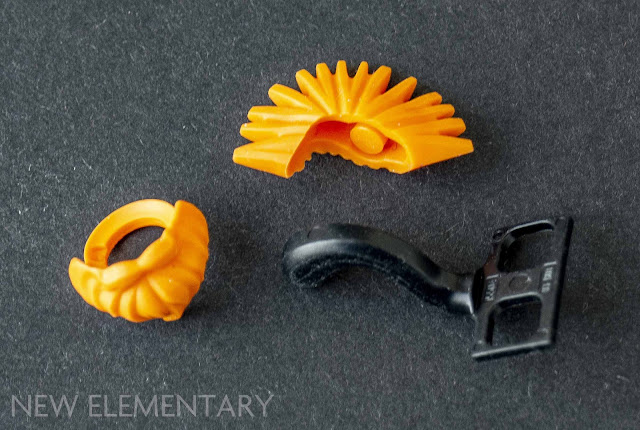 An extra tail, beard and mohawk are also included: the tail and the beard are true extras, white the mohawk is used on a brick-built cat automaton.

New molds of the January 2022 wave 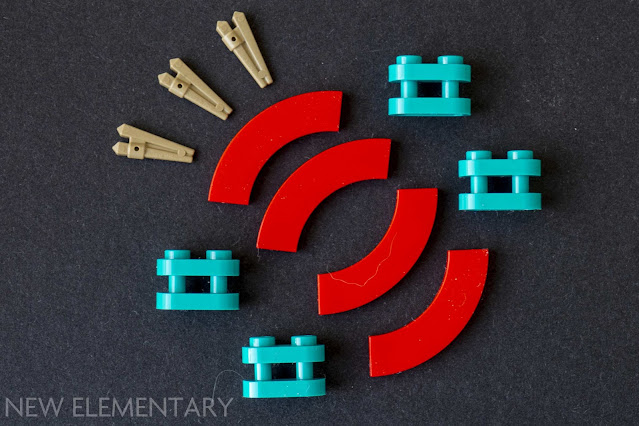 Tom Loftus already analysed the new 3x3 macaroni tile in his 80109 Lunar New Year Ice Festival review. It's always nice to see a family of parts completed. The 1x2 round brick with bars is another curious new piece. I believe a single bar/clip connection would be too weak in friction for larger character models, but the part is a nice tool for opening buildings. It's also a cool greeble element. The chopstick is a more specialised one, having only one 3.18 mm bar connection on side. I think a bunch could make a neat array of toggles on a coat. 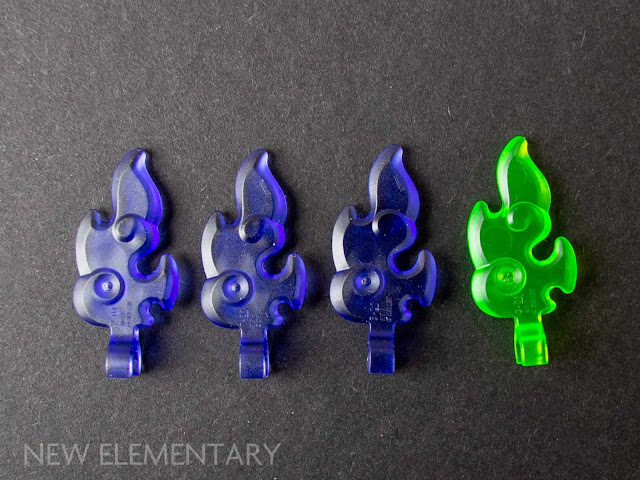 The new energy effect pieces - Trans-Purple ones for baddies and a Trans-Bright Green one for goodies -  are pretty. My first idea was some earrings. 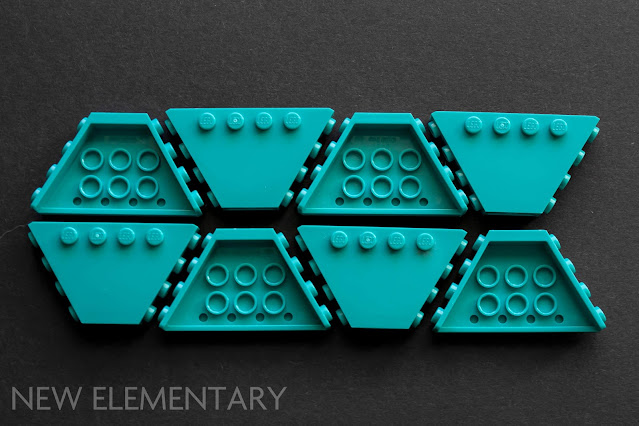 Ah, the tipper end. I dig these pieces - actually the first thing I ever wrote for New Elementary was an article on the exciting tipper end exciting piece family. Dark Turquoise is an excellent colour for them, too - so I definitely earmarked them for my MOCs. The set also includes 5 yellow ones. 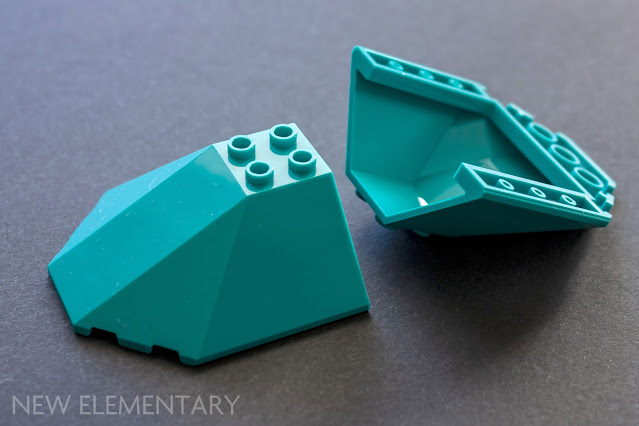 As on 80008 Monkie Kid’s Cloud Jet, the tipper ends are accompanied by this polygonal windscreen piece - only this time in Dark Turquoise, a fan-favourite colour. I like opaque windshields, as such thin pieces make it possible to build plenty of stuff inside. This enables their usage as skirts, coats, pauldrons and the like. 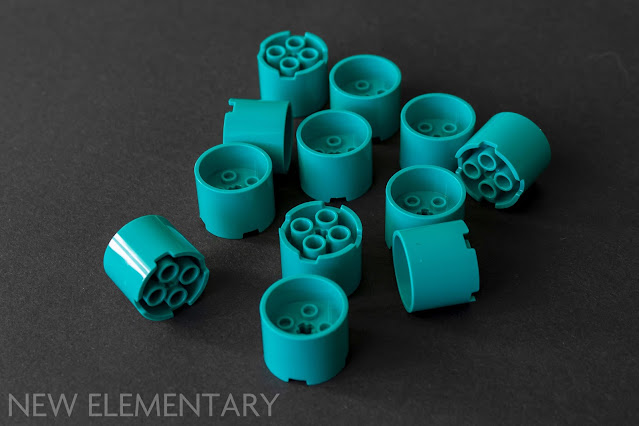 However, the most eye-catching parts to me are the 12 new-ish 3 x 3 x 2 round bricks in Dark Turquoise. These pieces tickle the character-builder part of my brain, but they also have plenty of architectural potential. They look like sawed-off Cylinder 3 x 6 x 2 2/3 Horizontal - Round Connections Between Interior Studs (30360) from the late 1990s, aka the Star Wars engine piece. Kev Levell wrote an insightful analysis on this part in a LEGO Star Wars review back in June 2021. 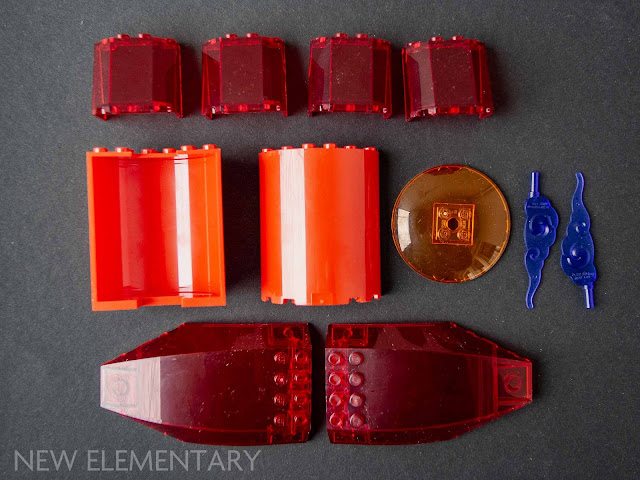 Space Police I fans should be happy with these trans-red windscreens, and so am I. New colours for dishes are always nice, too. The red cylinders are not as exciting, though; they remind me of the Atlantis theme from 2010. (12 years have gone by so fast.) The swirly cloud part in Trans-Purple debuted in this January 2022 wave, but was not unique to this set. 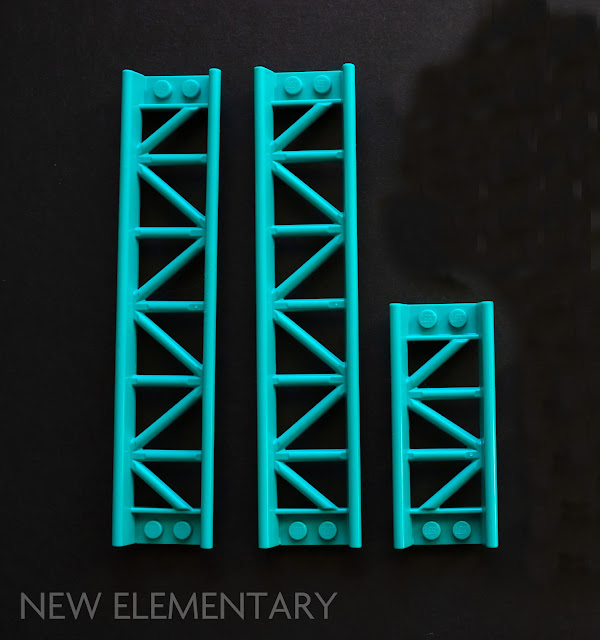 The roller coaster tracks have been proven popular in playset design since their introduction in 2017. They appear in two sets of January line-up. 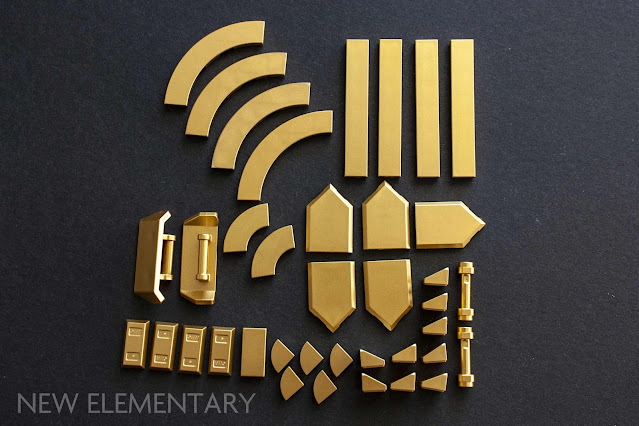 This set sports a nice array of Metallic Gold (drum-lacquered) pieces. Not all of them are especially rare, but there's a certain aura of exclusivity on them. The drum-lacquered parts have different Design IDs - these are marked between the Element IDs and usual Design IDs; Bricklink, for example, does not make this difference.

From the rarest to the most common: 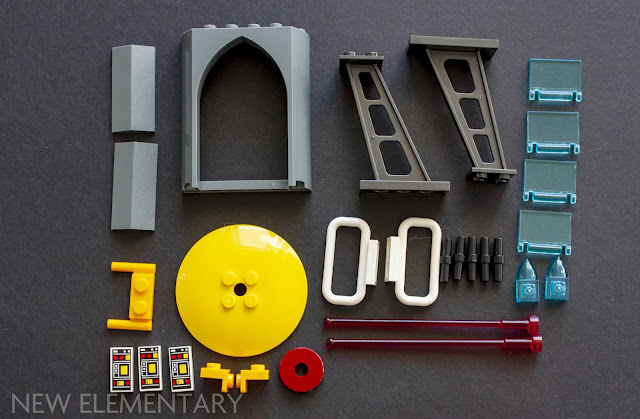 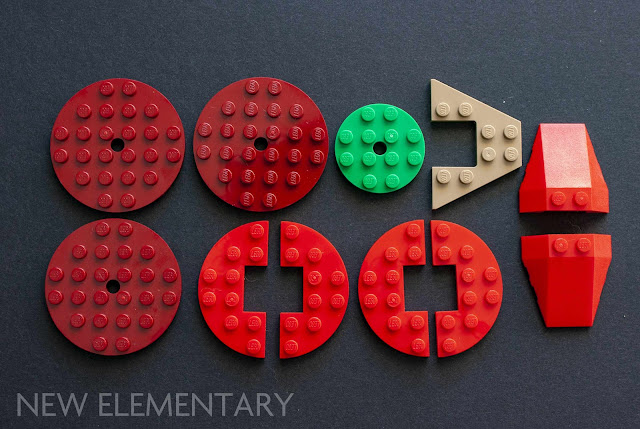 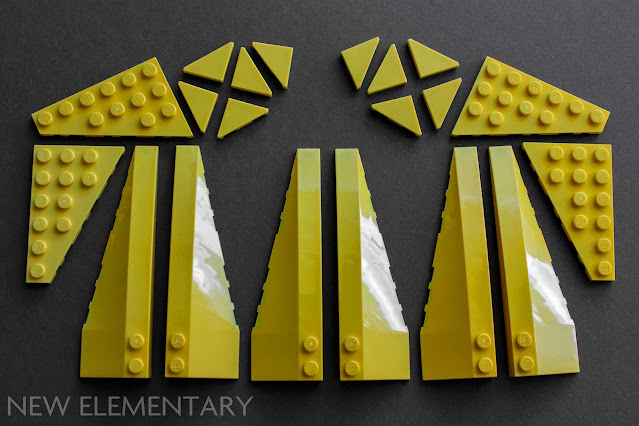 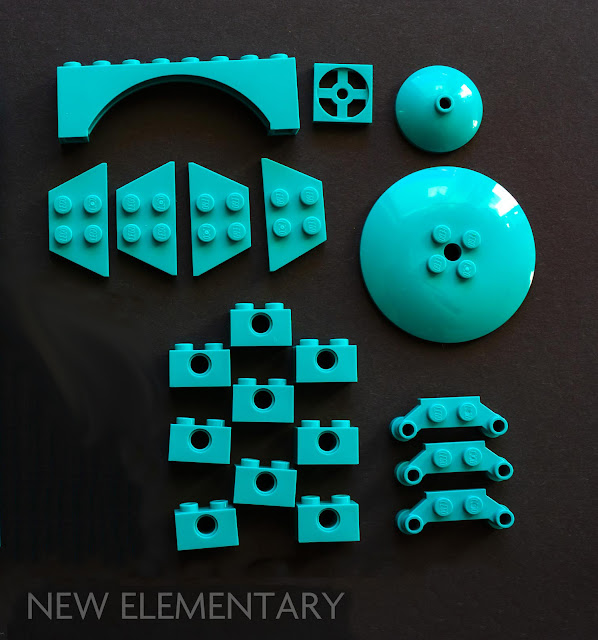 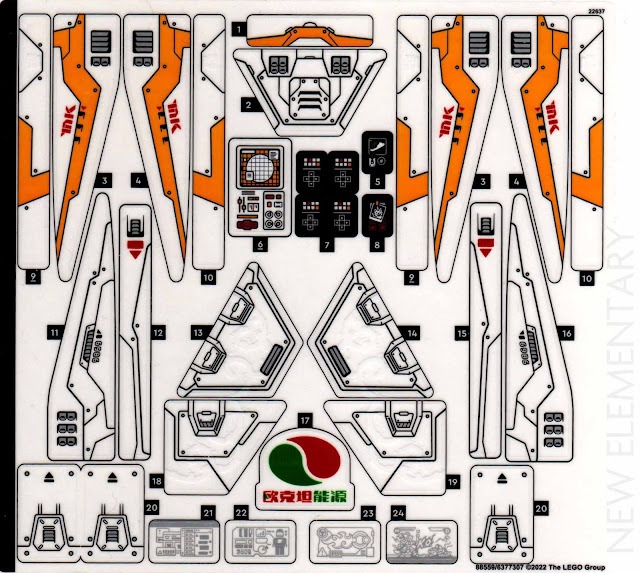 The stickers are printed on transparent background, which was a pleasant surprise. I did not apply them but these are some interesting ones for future uses on MOCs.

Eero Okkonen's MOCs inspired by the pieces of set 80035 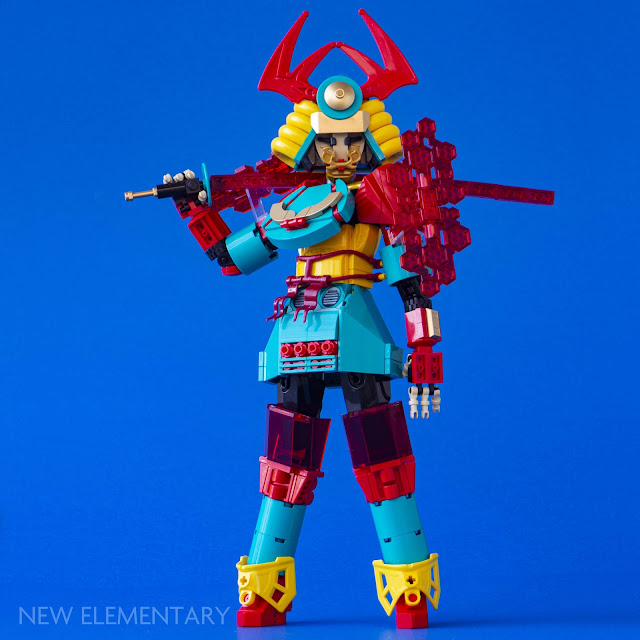 Here I wanted to use Trans-Red Windscreen 10 x 6 x 2 Curved (6376786 | 35269) as hair. In the end, it didn't work out, as the piece was too big - it would have blocked the shoulders. The second idea used the same pieces for the side panels of a samurai helmet (kabuto). They were angled more horizontally than on the hair idea, and it didn't look bad; but in the end, I was not able to fit a decent pair or pauldrons underneath, and all the connections were fragile at best.

After dumping the seed part I turned into other exciting pieces of Monkie Kid's rocket and based the helmet on the Dark Turquoise tipper end recolours, with the Metallic Gold spoiler piece forming the peak. The Trans-Red preserved in the way of knee pads using the another recolour from this set - Windscreen 3 x 4 x 3 (6365003 | 35193) - and levitating shoulder pad shields. I want to give a shout-out to LEGO System builders about this interesting part: it is 98566 Hero Factory Hexagon Shield and this MOC uses 4 of them. 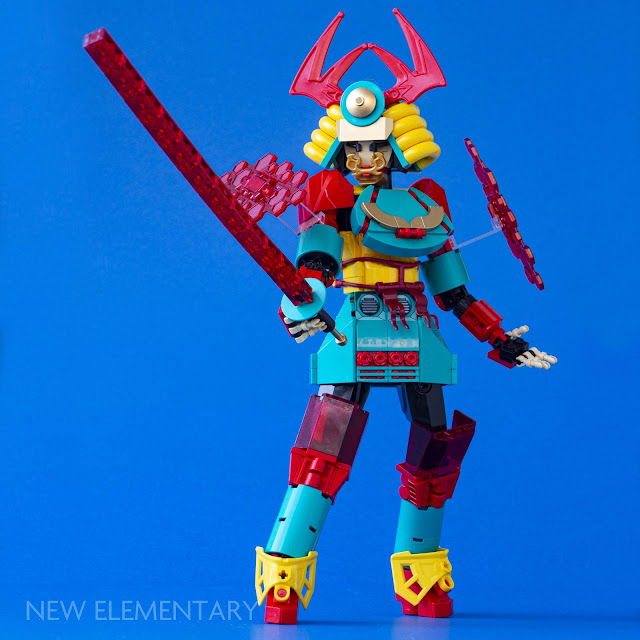 I mentioned the potential of opaque windscreen parts as skirts earlier, and naturally the Dark Turquoise windscreens (6365000 | 35332) ended up covering the hips, leaving plenty of room for the legs to move. The belt above features some more hardcore building - it was not easy to squeeze the rubbery harness part through the flags' pin holes. The Dark Turquoise Brick, Round 3 x 3 x 2 with Recessed Center and Axle Hole (6365001 | 73111) is used on both the legs and the arms to give my futuristic samurai some clear-cut, almost toy-like shapes. I think their simple Euclidean geometry has a nice contrast with the more natural or streamlined parts of this character. 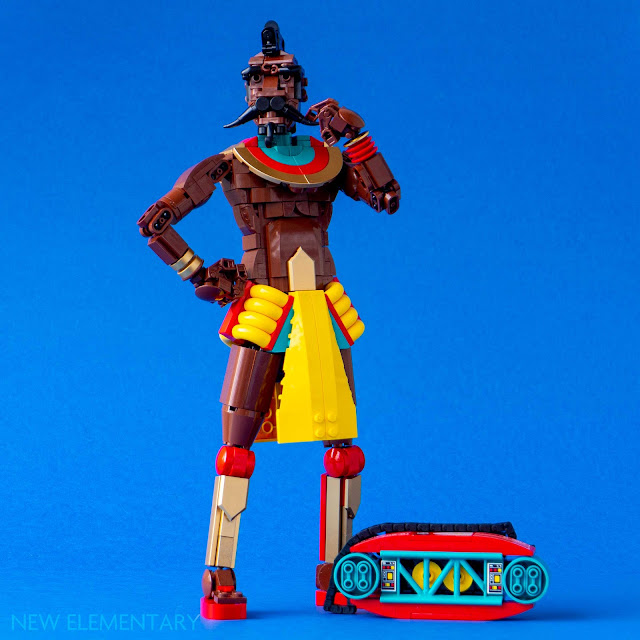 The second character was going to be a wizard at first. The first seed part was the monkey tail, and it formed a long thin beard quite painlessly. I also made a version that used the two other tails as a moustache, but it had a bit too much of "evil vizier" look in it and didn't fit. I ended up ditching the wizard concept, though. I tried to build a robe that used the roller coaster rails as embroidery, but their geometry was very challenging; I could not make anything that wasn't too blocky or unfocused. It was like running into a stone wall, metaphorically, and I ended up ditching the big robe.

I turned into the pleasant geometry of the completed macaroni tile set and made a collar. It was inspired by Tutankhamun's golden collar; Dark Turquoise, Metallic Gold and Red made a convincing colour scheme.

This turn made the process much more enjoyable. I complemented the fun facial hair with a mohawk and sideburns to compose a wild rock'n'roll feel with ancient Egypt vibes. I used two more Dark Turquoise tipper ends (6364998 | 30022) to make the kilt, or a loincloth; the technique is the same that I used on the samurai's helmet. They had enough room inside to give a decent amount of movement to the hip joint (there are actually four ball joints in there). Also much of the Metallic Gold included in the set went to the shin guards. I'm particularly happy with the sandals. 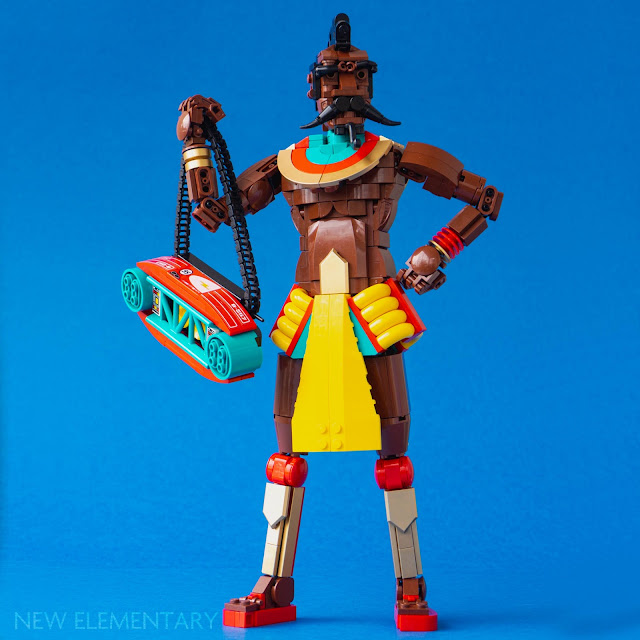 80035 is a happy, delightful set with a striking colour scheme and plenty of exciting recolours. I did not build the set, but the design looks good, too. Anyway, one does not have to build the model to enjoy this set; the parts inspire plenty of MOCs in their own right, and those MOCs won't suffer from Boring Grey Walls! It is nice to see recolours of parts like tipper ends and opaque windscreens, not to mention the 12 Dark Turquoise 3x3x2 round bricks. Metallic Gold lovers get their share, too.

One could think that the minifigs as the weak part - there are only two different torsos, for example - but their uniformity stands a reason; and on the other hand, isn't this what Army Builders want? I did not have a huge interest in minifigs here, but I'm always happy to have a couple of rare beards and versatile double-printed heads.

Dark Turquoise, Yellow, Red and Metallic Gold? Nothing to be frowned upon here. I can truly say it's a galactic adventure, despite never swooshing the set itself!