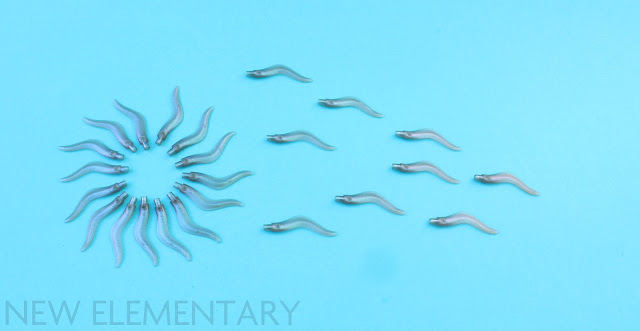 The perpetual, joined media engine of Marvel and Disney keeps on churning and every year the sprawling 'MCU' expands in more and more directions. Not too long ago - though not even the most recent - the Eternals were added to this ever growing universe and accompanying their film were a crop of licensed LEGO® sets.
Fellow New Elementarist Caz Mockett has already taken a look at some of the offerings in this line; meanwhile I received two other sets, 76145 Eternals’ Aerial Assault and 76154 Marvel Deviant Ambush! One particular new piece from this set caught my eye so I decided to eschew the usual review route and focus instead on what is formally known as Sword, No. 20 in Satin Trans-Black/ Transparent Brown Opal (6318222 | 69858).

At first glance, 69858 might not seem like a design that invites a lot of analysis - it is a fairly simple curved blade design, with one official connection point in a 3.18mm bar at one end. It has appeared across 10 sets to date in four colours, with Black, Dark Red and Pearl Gold joining the fancy opalescent variant we’re focusing on today. In sets, it has mostly been used either as a blade piece for a minifig weapon, or as a decorative element on creatures depicting spikes, feathers or hair. The piece is roughly 4.5 modules long, and because of the curvature it’s a midge wider than one module.

The curve of the piece is pleasant, especially in this colour, however the dimensions make it tricky to find unorthodox, friction connections. When handling a new part I always spend some time jamming it into various gaps and slits on other pieces to see if anything takes, and in this case the success rate was fairly low. The material used for 69858 is also softer than usual, likely for safety reasons, which means that overzealous part-mashing will likely leave some blemishes on the pieces. 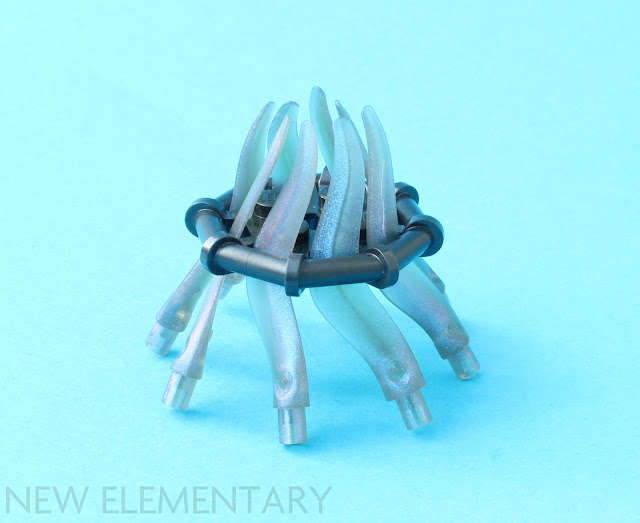 One particular interesting and successful case of jammery occurred when I introduced the blade piece to Parabolic Ring (75937). If one were to cover the bottom bits, it could work as an exhaust of some sort, or a stovetop. Maybe a fireplace? I definitely hope to see the mould released in hues of transparent red or orange in the future. 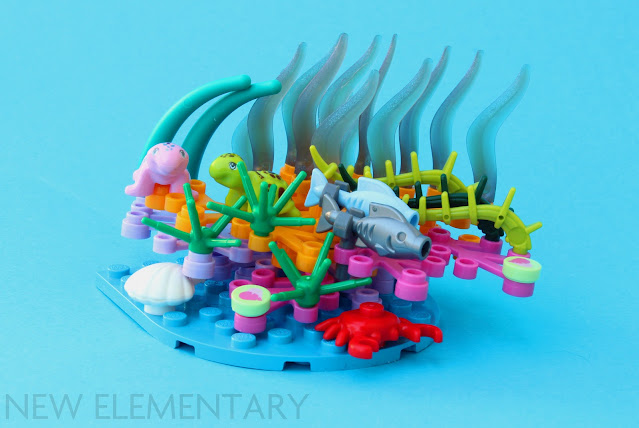 First up, I put together a small, humble coral reef vignette tablescrap as particularly in this colour the Eternals blade piece felt a lot like some kind of sea grass - this might not be accurate marine flora terminology, but I’m not too well versed in the subject beyond reefs looking pretty and being essential for the ecosystem. The parts definitely felt like they looked the part!
Caz whipped up an infinitely more impressive reef for her own Eternals review linked above - we both came up with the reef idea independently, so this definitely seems like a fitting use! 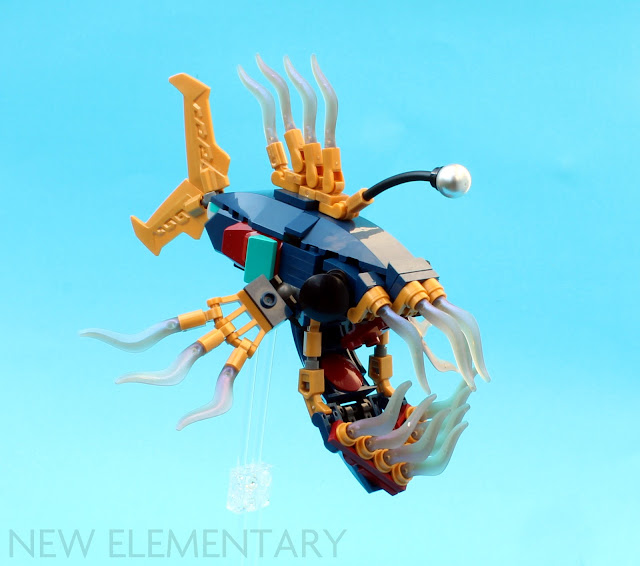 Sticking to the aquatic theme - and mostly relying on the pieces that were included with the sets themselves, with some outside help - I wanted to utilise the blade piece as a tooth rather than a spike or frill.
Due to the size of the part, using it as teeth would have meant a rather large build to match the scale. My initial plan for the piece being used as teeth was to make a sandworm based on the ones described in Dune; this was also around the time when hype around the movie adaptation was peaking. That plan didn’t quite work out, and after a return to the drawing board I opted for an angler fish instead.
Sticking to the colour scheme of the Deviants in the sets themselves, the tendency for angler fish species to have comically small bodies compared to their gargantuan mouths came in handy with the scale of the build. 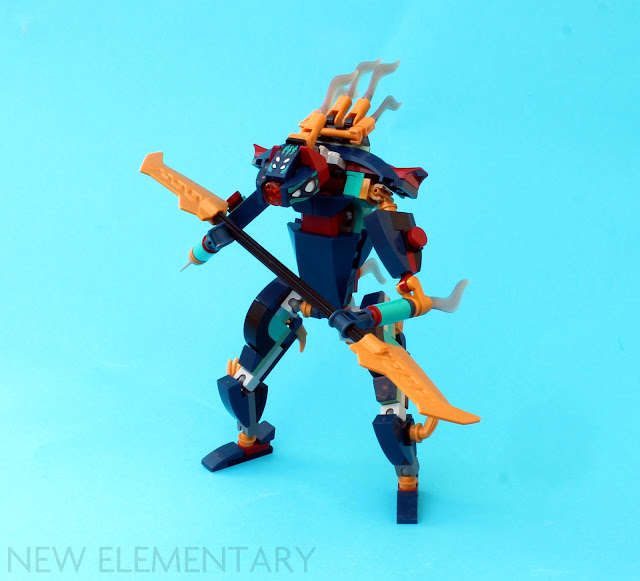 Continuing the trend of trying, in broad strokes, to stick to the overall colour scheme and design of the Deviants while using as many parts from the sets themselves as possible, I put into bricks one of my first ideas when I saw this part appearing.
In 2003, the Bionicle theme welcomed the Rahkshi line of villainous canister sets, bringing the shocking innovation of knees to the figures for the first time. The design became a fan favourite, and saw a slight reinterpretation in the animated movie. Here, the spiky spines running along their backs were more organic looking, and one of them had a set of spines that look just like these blade pieces. 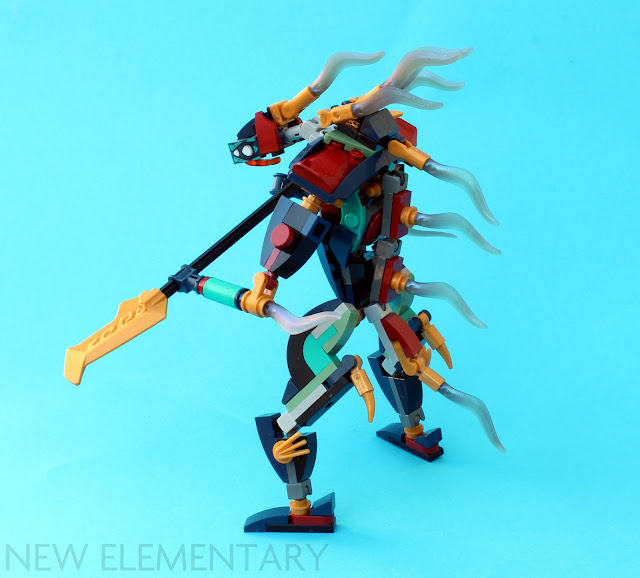 The printed tiles making up the eyes and heads of the Deviants included in the sets came in handy here, as did the large pool of the seed part available - the two Eternals sets I received had 24 of them in total between them!
Sword, No. 20 in Satin Trans-Black/Transparent Brown Opal (6318222|69858) is a simple piece with a simple shape and a single connection point, but it still crams a lot of potential and versatility into the design regardless - I’m definitely looking forward to the part appearing in more colours in future sets!
Editor: Chris Baginski

Posted by: Pohaturon Posted on 4/17/2022 04:13:00 am
Email ThisBlogThis!Share to TwitterShare to FacebookShare to Pinterest
Labels: MOC, Super Heroes