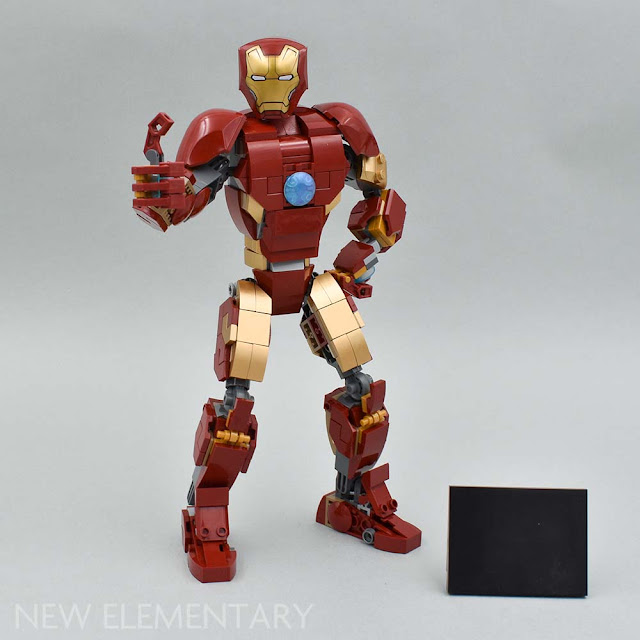 LEGO® 76206 Iron Man Figure heralds the return of LEGO Constraction! LEGO Marvel Super Heroes 76206 Iron Man Figure is a 381 piece-set priced at £34.99 | €39.99 | $39.99 and available now. LEGO designers have ditched the specialized elements of the character and creature building system (CCBS) and created an action figure purely with traditional LEGO System bricks. Does this new direction in design stick the (superhero) landing? Read on and see. 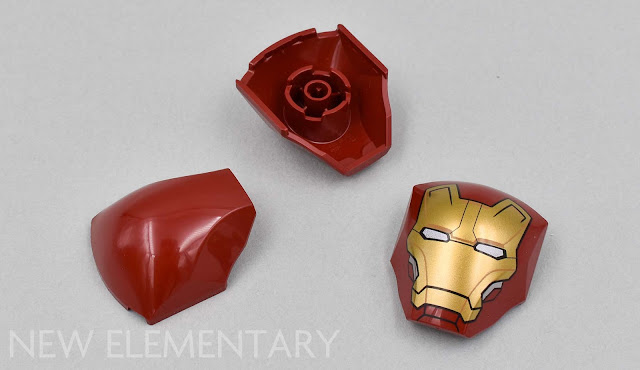 My initial reaction was to compare this new shoulder element to the Large Figure Shoulder Cover, Armor, Round, Smooth [Plain] (21560) element. This older shoulder armour first appeared in 2015 in the Star Wars Buildable Figure series. Those figures relied heavily on specialized elements in their construction and were designed to integrate easily with that style of building rather than ‘traditional’ LEGO bricks (i.e. those with studs). This new element on the other hand is super easy to integrate into System MOCs… 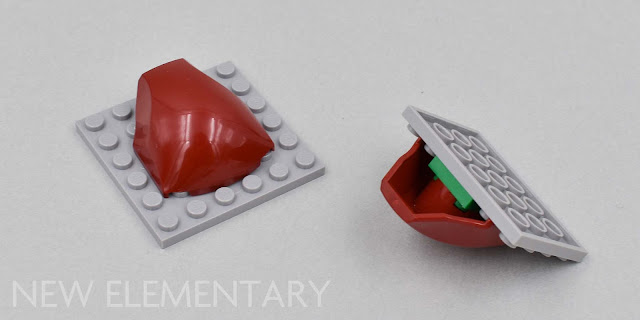 To start, it can be attached to a baseplate without any interference thanks to two recesses in the curved edge. It’ll stay put too as connections can be made thanks to what is essentially a 2x2 round brick on the inside which even has an axle hole. You’ll need an extra plate for the part to reach the baseplate though. 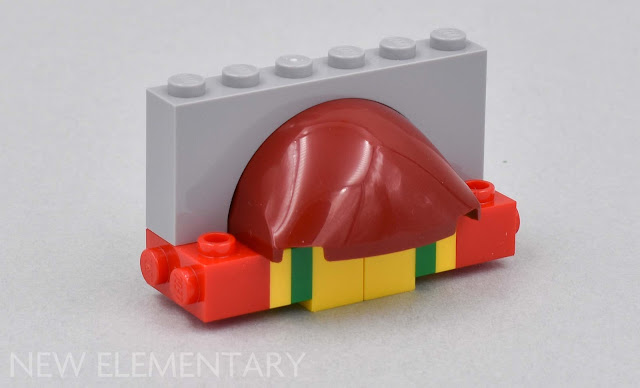 The curved edge of the element matches Slope Curved 4 x 1 Double. This match is utilized in the Iron Man Figure build. Finally, there is a curious mix of curves and angles on the inverted sloping portion of the element. I was very impressed to see that this actually fits into the System too! It partly matches a Slope 2x1 Curved but that changes to a sloping 45 degree straight edge. All in all, this is a very interesting and unique element. It seems like the perfect part to build mechs and dragons so I’m sure we’ll see it pop up in the Ninjago theme. Beyond that, it might make a nice flower petal or even a cockpit canopy in a vehicle. It’s a shame there won’t be much room for a figure inside though. 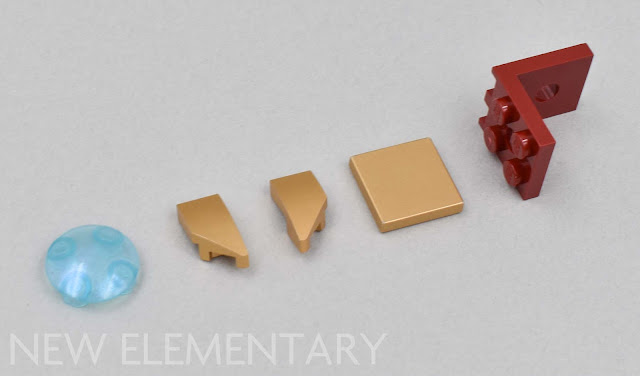 There’s also a generous helping of rare elements in a variety of type and colour: 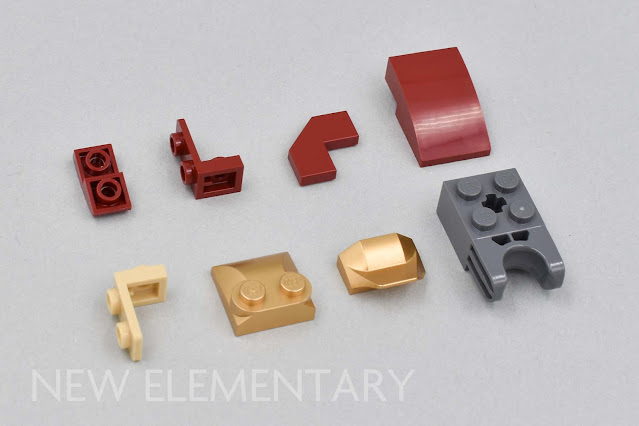 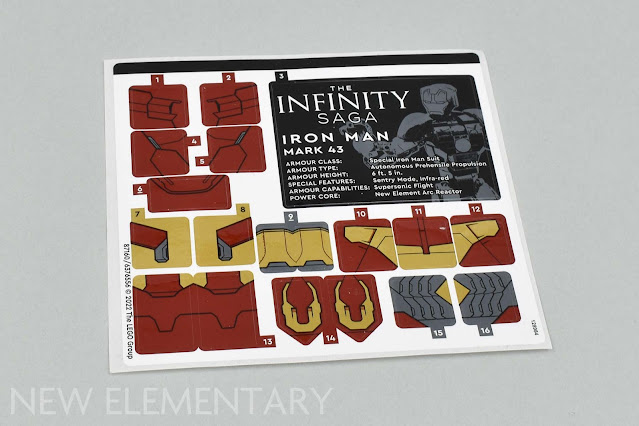 Many of the details on the Iron Man figure are recreated using stickers. Some of which are applied over our beautiful new Drum lacquered Metallic Gold elements. The colour match is surprisingly good in the right light. We also get a big UCS or Creator Expert type sticker telling us some of the specs of Iron Man’s mark 43 suit.

The build starts with the lower half. If you've built other LEGO mech-type models, you'll be familiar with the technique of sandwiching ball joints and ratchet joints between brackets. Tiles are added to complete the Dark Red and Metallic Gold paint job. 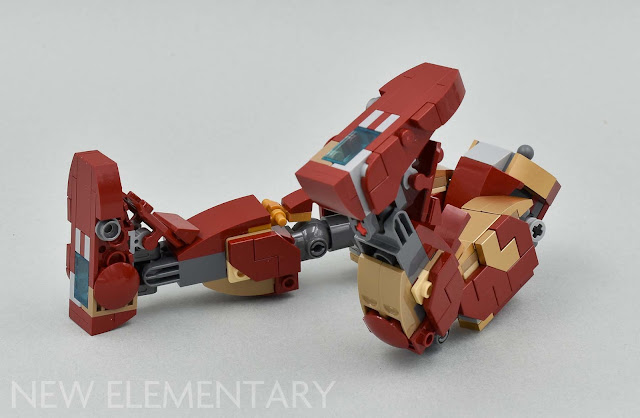 It all looks great but the mobility of the hips is limited to pretty much one plane of motion. This problem lies in the technic bush which helps secure the Technic Ball Joint with Through Axle Hole (53585) in the joint but severely hinders the mobility in this area. It can be easily remedied by using a Technic Ball Joint (32474) in its place, although the legs may be liable to being pulled off. And slightly frustratingly, the knees have a totally different problem in that they are hyper-mobile. 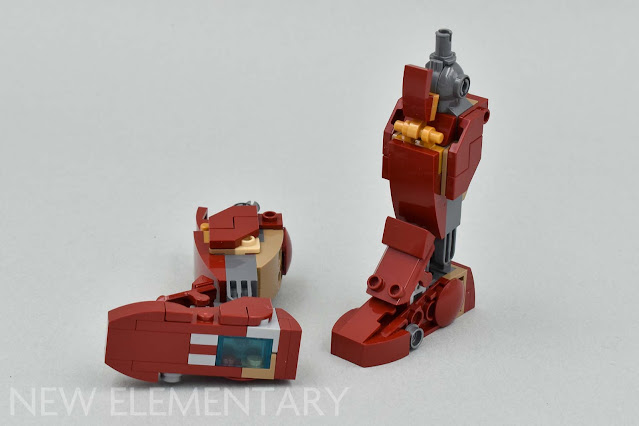 I really can’t fault the aesthetics as the colours and shaping are excellent. I particularly like the design of the boots which even have Trans-Blue bricks to simulate thrusters in the soles. 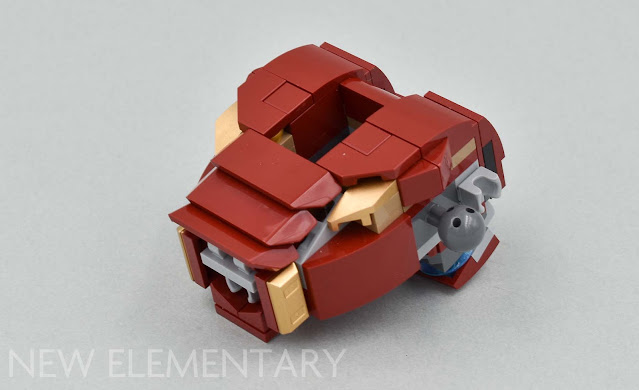 The build continues with the torso, which relies on stickers for a large portion of the details, but there’s also some real NPU too - check out those washboard abs! The connection at the waist to the hips is a Mixel joint which affords the model some rotational mobility. More Mixel joints are used on the back to attach thrusters which can be folded away or deployed should the occasion arise. 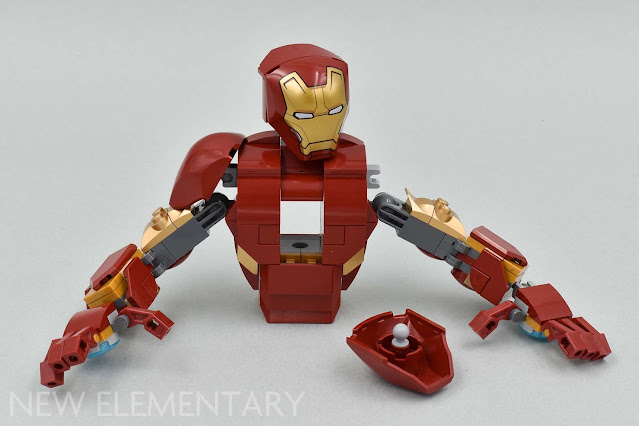 The arms feature hinges at the elbows and fully articulate wrists and fingers. However, the shoulder connection might be my biggest gripe with the set. In order to accommodate the new Shoulder armour elements, the arms attach very low on the torso, though it isn’t as noticeable of an issue when the model is posed in a neutral stance. As much as I like those new shoulder armour elements, their placement here seriously hinders the mobility of the shoulder joint. With a bit of modification I’m sure most builders could find a more articulate solution. 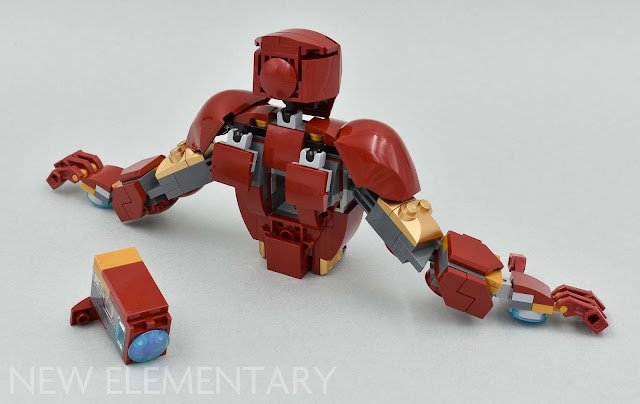 The final touch is the arc reactor in the chest. I wonder why this step wasn’t incorporated into the assembly of the torso two bags ago… Nevertheless, it’s quite satisfying to push that final block into the square cavity of the chest. The arc reactor consists of a light brick with clever use of the newly recolured bracket to allow the LED to shine through the Trans-Blue Opal Boat Stud. The LED colour is orange (rather than a cool blue which we see in the movies) which I’ll forgive as this is a very cool little feature and I must give kudos to the designer for this clever construction.

The finished model is imposing at just shy of 10 inches in height. The armour is resplendent in Dark Red and Metallic Gold tiles which really sell the idea of armour plating. I didn’t even apply the stickers and it looks great.

The figure boasts plenty of articulation points, though it’s a shame they don’t afford him much mobility.  He has just about enough reach to fire off the repulsors in his palms but I couldn't get him into his signature 'superhero landing' pose.

I can totally envision these being used in some Ninjago dragons. I think they’d work well as petals of a flower too- the Dark Red in this set certainly makes me think of roses. But even putting just two of the parts together creates a shape somewhat reminiscent of a tulip. 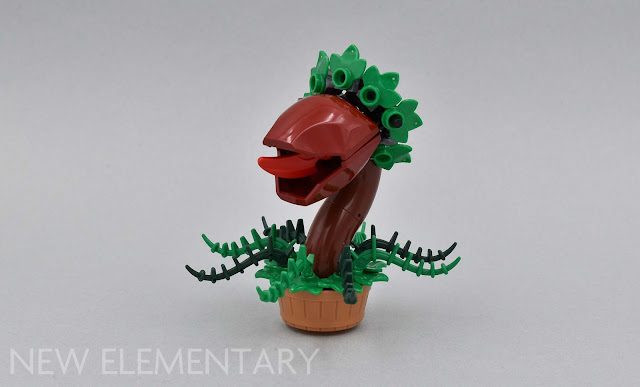 But alas! At the time of writing, the Bricks and Pieces service had just merged with Pick a Brick, and the limited parts catalogue meant that I couldn’t get my hands on more Slope Curved 4 x 5 x 1 2/3. Two petals wouldn’t make a flower, but I persevered. My floral creation wasn’t quite as beautiful as I envisioned but I think I channeled some Audrey II vibes with this little build. 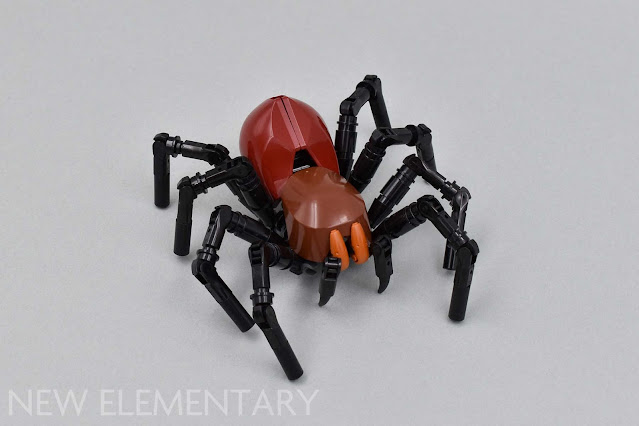 I really liked the shape that resulted from putting two of the new Slope Curved 4 x 5 x 1 2/3 together: a sort of organic 'bulb' shape. I used this idea again to make an abdomen for a spider. That Reddish Brown element appeared as a shoulder in an older Constraction figure, 75535 Han Solo.

76206 Iron Man Figure is a decent LEGO action figure and it’s an exciting and intriguing new direction for Constraction figures. It has a couple of flaws but I’m quite impressed with what was achieved within the constraints of system LEGO bricks. I hope to see more characters in this style with improved mobility in the shoulders and hips. Until then, the Iron Man Figure provides a generous helping of the parts you’ll need to build your own (Ultimate!) Iron Man. Speaking of parts, weighing in at 340, it is a little bit on the low end of the spectrum for a set at this price point but that is to be expected with the Marvel co-branding. Perhaps a minifigure in the MK 43 armour would incentivize a purchase just a little more?
On the other hand, a set that introduces a brand-new mould with a good handful of recolours and rare parts scores favourably with me. And that new part is a good one. The printed version is awesome and the unprinted versions are potentially very useful for mech and character builders. I’m keen to see this part appear in more colours in future sets and I think Ninjago dragons and mechs would be ideal candidates.
Editor: Chris Baginski

Posted by: Thomas Jenkins Posted on 4/15/2022 08:21:00 am
Email ThisBlogThis!Share to TwitterShare to FacebookShare to Pinterest
Labels: Set review, Super Heroes